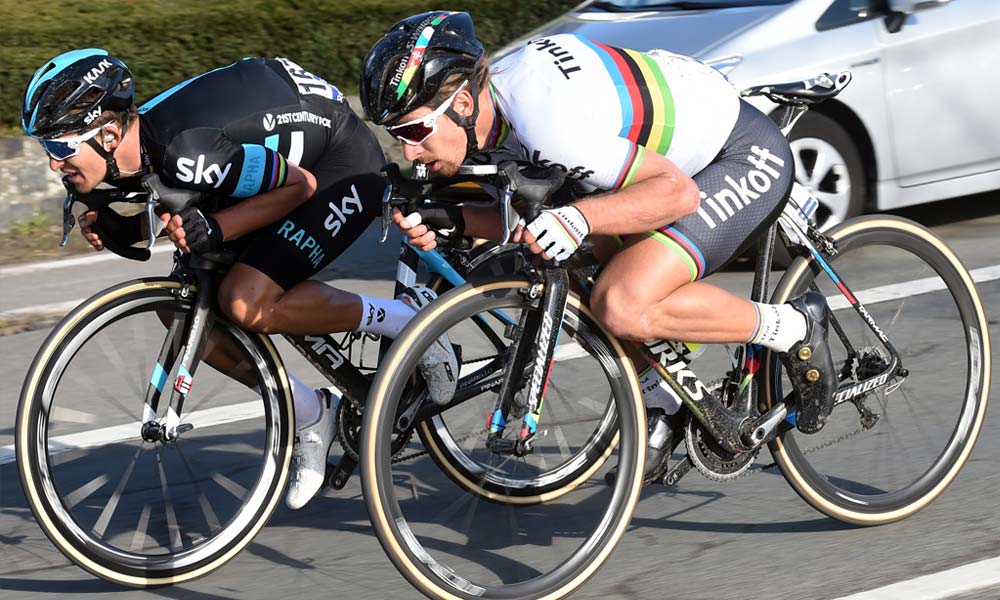 Riding advice: training is not racing

Once in a while we’re going to delve into the RIDE archives and publish stories online that have previously featured in our print editions. This is a piece by James Stout from #RIDE72 (published in May 2016).

What you see professional cyclists doing on TV and what you do while riding your bike are different things. James Stout considers a few obvious examples as part of his ride guidance column.

Within epistemology, the branch of philosophy devoted to studying the nature, sources and limits of knowledge, there exists a debate between rationalism and empiricism. The former holds that we can know something without having a sense experience. The latter argues that in order to know something we must experience it ourselves. It seems that this debate is never more obvious than on the Saturday morning group ride.

While we can all see that it is possible to pedal one’s bicycle whilst sitting on the top tube and placing ones head centimetres from the front wheel, and we can imagine the physics that allow it to be so, some of us simply have to experience it ourselves in order to feel the extent of its reality.

It can be done, so some do it… even if that means putting all our mates in danger of the cluster of sense experiences that rational abstractions seem inadequate to fully capture – ie. braking with your skin.

As a child, I didn’t watch much television. But when I did it was either cowboy movies, documentaries or the bizarre British sheep herding contests that seemed to fascinate my father every Sunday. Well, that and the rugby, obviously.

It was probably when I was about five years old that I first learned an important lesson: the things I’d seen on television were not things I should try to do at home. Notably, however many times I had seen the Lone Ranger do it, I couldn’t vault onto the ageing Welsh Mountain pony we kept in a field behind the house. If I ever needed to remind myself of this I could consider the whacking bruise I had on my chest from the last time I had made an attempt to do so and she had launched me in the opposite direction with a well-placed hoof.

Just about every television appearance made by Robert Craig Knievel came with a disclamer, one so common that today it is a linguistic trope: “Don’t try this at home kids”.

Everyone wanted to be him, but what made him so cool is that nobody else could do the things he did.

The same essentially is true of our friend Peter, the world champion. He is incredible because what he can do is unattainable to most of us. That doesn’t stop people trying it though.

So, short of printing “don’t try this at home” on the back of every rider’s number in the Tour de France, here is a handy list of things you see on TV that you shouldn’t try out on the Saturday morning bunch ride. 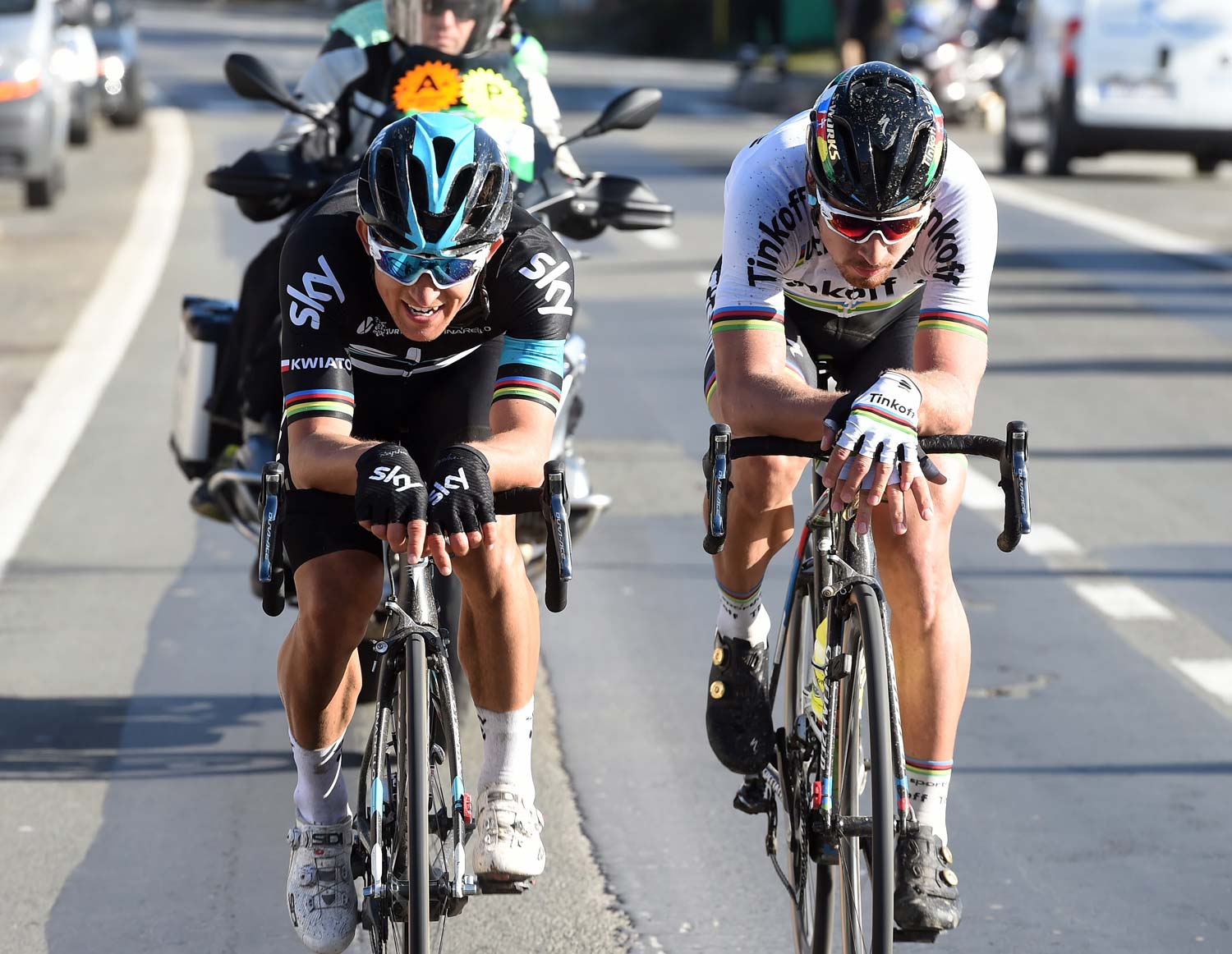 No need to do what they do… Michal Kwiatkowski and Peter Sagan in the GP E3 Harelbeke. The 2014 and 2015 world champions demonstrate two of the riding stances that shouldn’t be used in the humble training ride: pedalling super tuck (top of page) and the invisible aerobar (above).

First and foremost: the pedalling super tuck (see image at the top of this feature). This is quite possibly the worst way to steer a bicycle at 80km/h.

For those not in the know this involves holding the bars by the stem and sitting on the top tube with your rear tucked in underneath the tip of your saddle and your head positioned precariously below the handlebars.

I was still racing when this started happening, I even did this in races, but there is never a place for it during a casual group ride, or even a competitive group ride. It’s quite simply not worth it.

We saw it put to winning use at espoirs worlds by Matej Mohorič a few years back. You will notice that there was a rainbow jersey and a life-changing contract on the line for this young man.

The only thing you can win for doing the same on a group ride is a life-changing crash. I say this as someone who was once threatened with a traffic offence during a race for adopting the Pantani “spoiler” position.

I was stupid. Luckily I worked it out before Darwinism worked me out of the gene pool.

Secondly, the invisible aerobars. Yes, riding with your hands dangling into the abyss is faster (I have seen figures suggesting it saves about 80w in one case), however you are essentially riding with no ability to steer or brake and placing your face in a prime position for slowing you down should you be forced to stop before you can grab your brakes.

Just imagine trying to explain to your colleagues or family that you really wanted to be the first one to the town sign and that’s why you now take your teeth out every night.

Worse yet, imagine explaining to the bloke behind you why you made that decision when he can’t go to work because he’s nursing a broken arm.

Riding with the aid of vehicles

Holding onto or drafting cars is another thing I’ve done dozens of times in my cycling career, even after I finished racing. However the caveat here is that those cars were driven by someone who knew what I was doing and whom I trusted.

If you took a look at my old Audi team car you could see the tyre marks along the rear bumper. That’s what trust looks like.

Still, on a weekly basis, I’ll see someone on a bunch ride jump behind a station wagon, lorry or bus. In many cases the driver can’t see the cyclist or, even worse, can see the cyclist and thus panics.

Here again you are bringing an innocent bystander into very real danger of harm through your desire to win something with literally no value.

I know it’s fun and tempting to draft behind vehicles while in traffic but you’re one pothole away from feeling very foolish and instead of earning a free ride to the finish line, buying yourself a very expensive lift to the casualty ward at a nearby hospital.

Even a willing driver can make mistakes; I’ve seen it in the convoy of bike races dozens of times.

The years of practice that make it possible for the antics you see on TV each July are simply not available on your local bunch ride every Saturday.

The problem with doing these things is not just the danger you put yourself in but the danger you put others in. Not only could you crash into or in front of someone, but by making these risks the cost of admission for being in the front group, you encourage others to join you in your reckless behaviour. Nobody has to follow you if you do something risky, but by taking risks to go fast you do make it the case that, in order to stay with the fastest riders in the group, one must either risk life and limb or pedal much faster on the climbs. For many people the second choice isn’t an option.

When you make taking risks part of a ride, you exclude people from your ride who have a sensible attitude to their own wellbeing and the role cycling plays in it. Is that something we really want? If so, I would argue that the group left for the sprint will be: A) Much smaller; and B) Absolutely petrifying.

If everybody had to risk crashing to get to the sprint win, it stands to reason they’ll do so again. These few pointers are just a start. It is by no means an exhaustive list.

Off the top of my head the following things also fall into an adjacent “just stop it” category:

Essentially trying to look good and ending up looking like an idiot to most people is the essence of road cycling, so go ahead, just don’t make poor choices that have consequences for other people.

There are three Ts in cycling: Talent, Training and Tactics. The reason you aren’t a pro cyclist is probably that you lack at least one of those.

Time spent in the saddle, along with an abnormal ability to steer bicycles and an understanding of when, and how, to take sensible risks mean that Sagan can super-tuck away to the podium (even if it is often the second step) and that you, Dear Reader, should not.

Enjoy the racing. Marvel at the abilities of the riders. And go and recreate the exploits you’ve witnessed. But focus on riding hard, fast and skilfully, not on the unpleasant risk-taking that (believe me) most of the guys you see in that colourful morass called the peloton do not enjoy being part of.

Even Evil Knievel himself recognised the irrationality of what he did saying: “I have trouble getting life insurance, accident insurance, hospitalisation insurance and even insurance for my automobile… Lloyd’s of London has rejected me 37 times.”

None of us doubts that Knievel completed his stunts, but you don’t see people on Vespas trying to launch over 14 double-decker buses either.

There’s an element of danger inherent in bike riding but making that danger the sine qua non of your group ride selects a group of people whom anyone who could be described as rational would rather not share their cycling experience with.