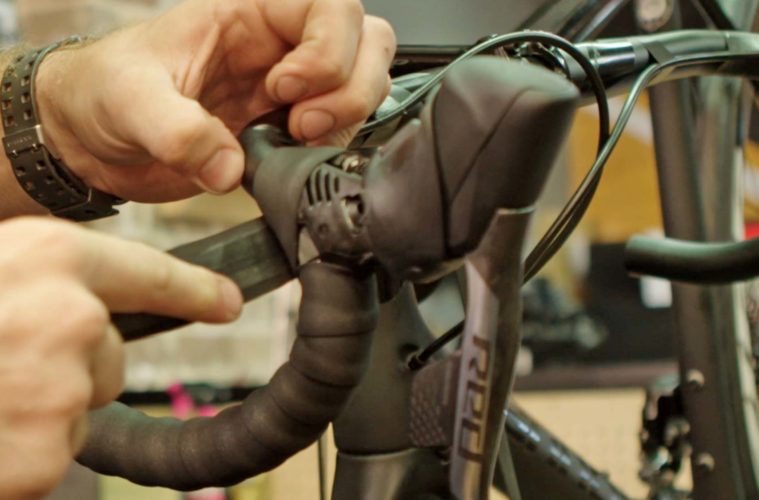 How can you rejuvenate your bike for minimal costs and maximum gains? Treat yourself to some new handle bar tape… but be sure to apply it correctly.

It doesn’t cost much but it can make your bike feel like new. Applied correctly, handlebar tape will put a smile on your face that will last at least a few hundred kilometres. (Conversely, do it poorly and your ride will be filled with frustration…)

Putting on new handlebar tape a simple process that many riders tend to avoid for fear of doing it incorrectly. Of course, there is not one method that eclipses all others and mechanics have been known to joke that they can tell who built a bike based on the technique used.

During the recent build of a Cannondale/SRAM AXS review bike, it came to that moment when bar tape was being wrapped, and so we asked Wooly’s Wheels’ mechanic, Paul Wootton, if he could slow down the process and talk us through his technique.

It usually takes him only several minutes but, with a few explanations along the way, the process dragged out a little so that some of the basics of wrapping could be explained.

It’s likely that a ‘how to’ feature such as this will attract plenty of commentary as everyone has their favoured way of wrapping bar tape. Not every mechanic is, however, willing to go in front of the camera and explain their technique. Why? Well, because there is always going to be someone who believes they know better.

Don’t be shy though, give it a go.

Here is an overview of the process as explained by Paul Wootton.

(It should be pointed out that Paul was given no notice, no time to write a script, no opportunity to consider which method he would recommend… he was just put on the spot and asked: can you show us how to wrap? It was recorded in one take and there may come a time when we consider more of the details of how it could be done. For the time being, here is a quick list of things to consider.) 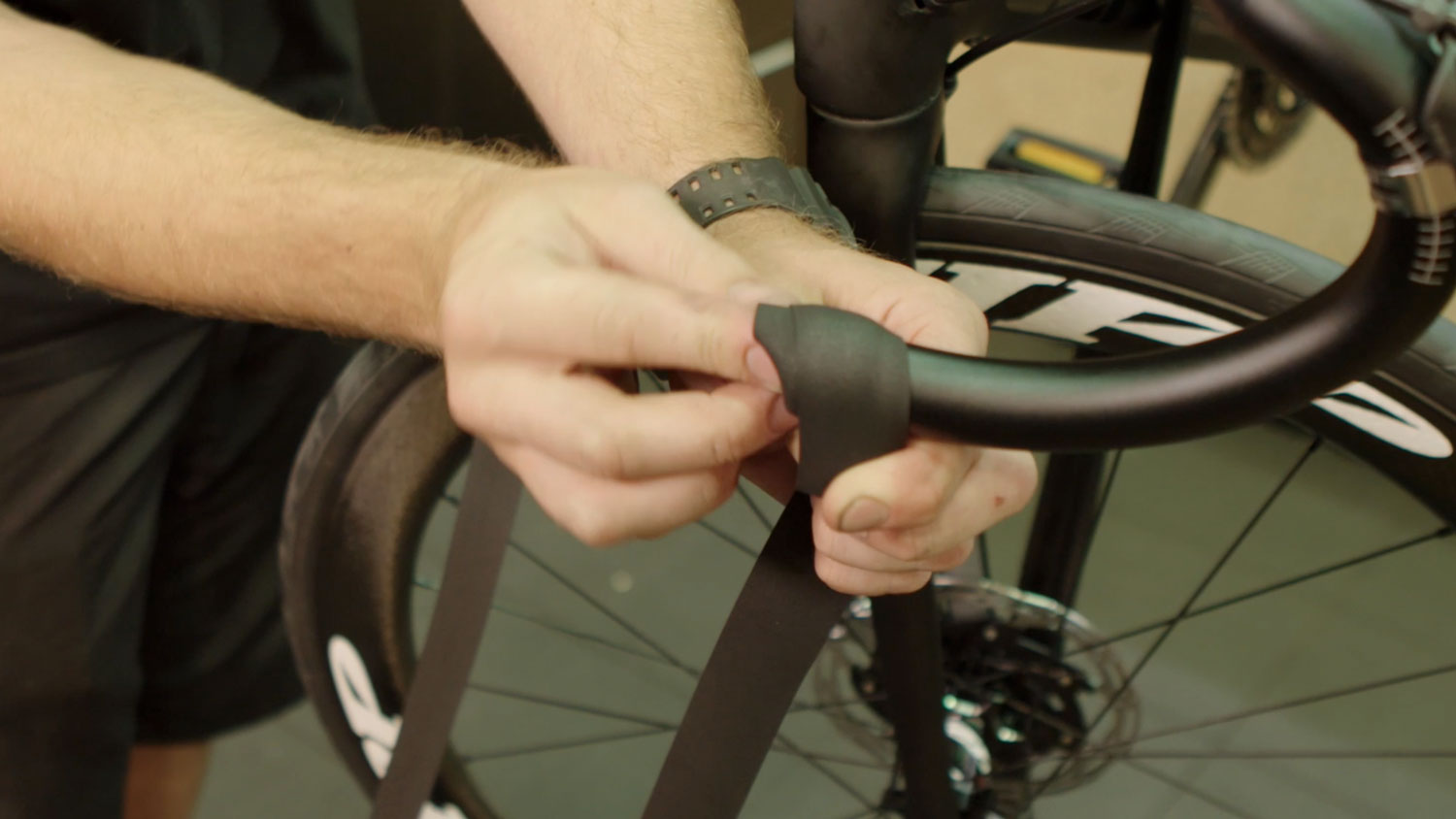 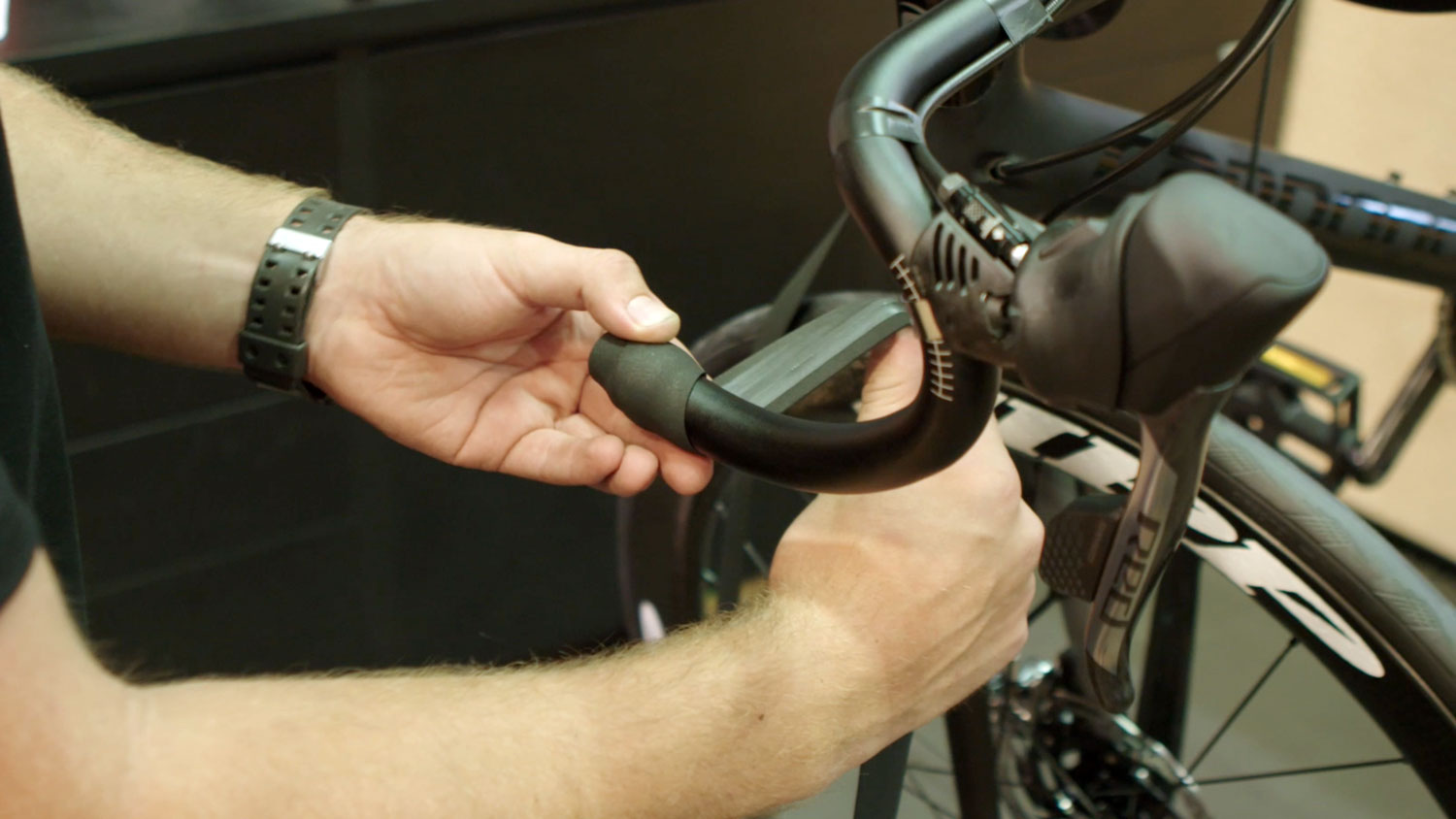 This is a transcript of Paul’s explanation from the YouTube video.

“I like to get the bar tape all ready over the bike. I’ve [also] got my electrical tape. My scissors are in my pocket.

“Basically, everything you need should be close to you because when you start a side, you want to complete a whole side. Have your hoods already tucked back.

“There are a lot of different ways to wrap, and I’m not saying any one way is right. A lot of the time you can actually tell which mechanic has worked on a bike by how they wrap their tape – it’s just one of those things.

“I’ll generally start on the inside of the bar and I’ll pinch the bar tape so I’ve got about half of it overlapping the end of the bar.

“Whenever you’re wrapping around, you always want to put in pretty good amount of tension, [but] not overly stretching it.

“I’ll do one complete revolution and you can see the amount of excess… there’s a reasonable amount.

“Then, basically what I’m going to be doing is always keep tension as I go around and, as I come up, I’m looking for the edge to be overlapped by about a third each time. 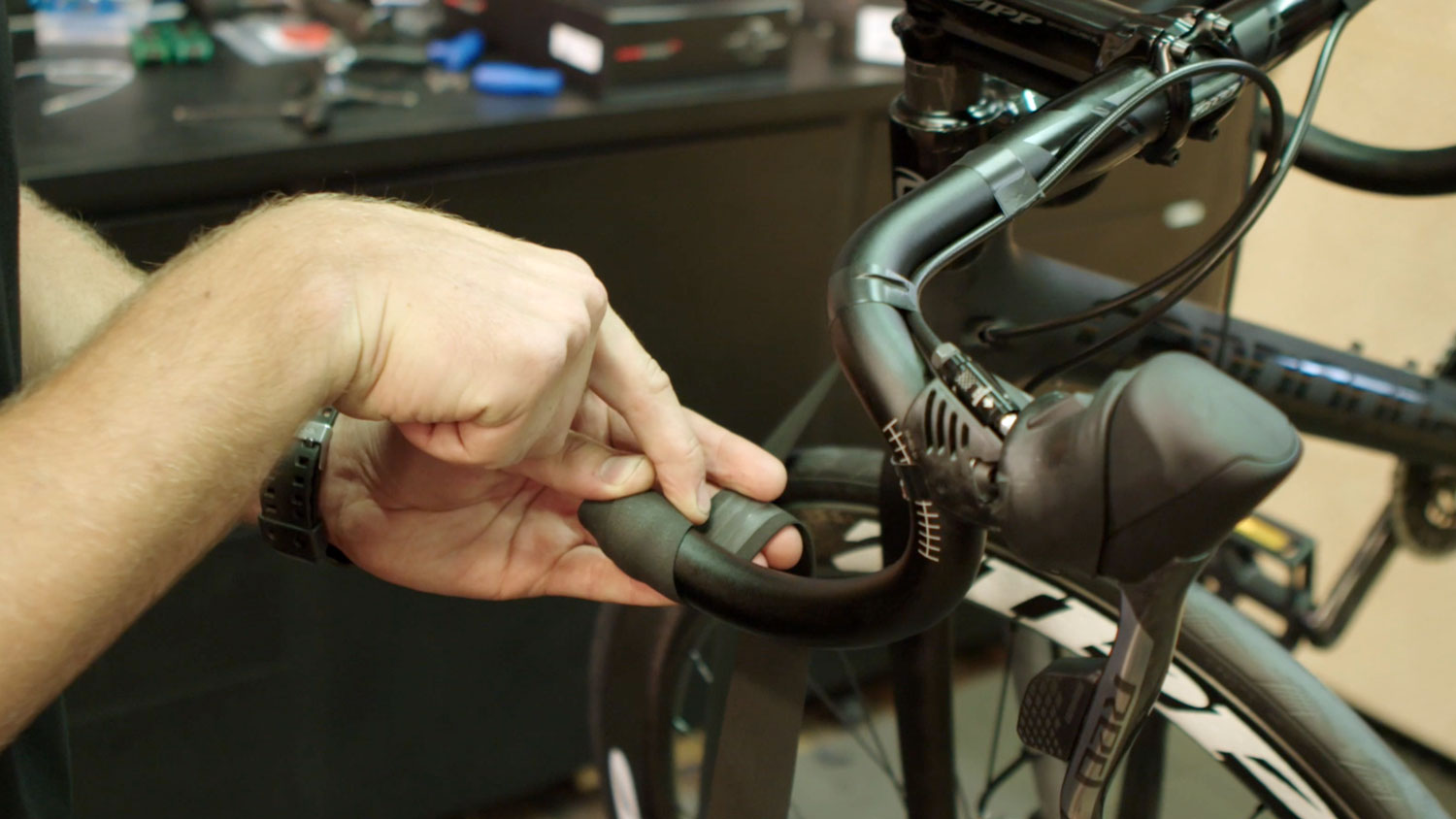 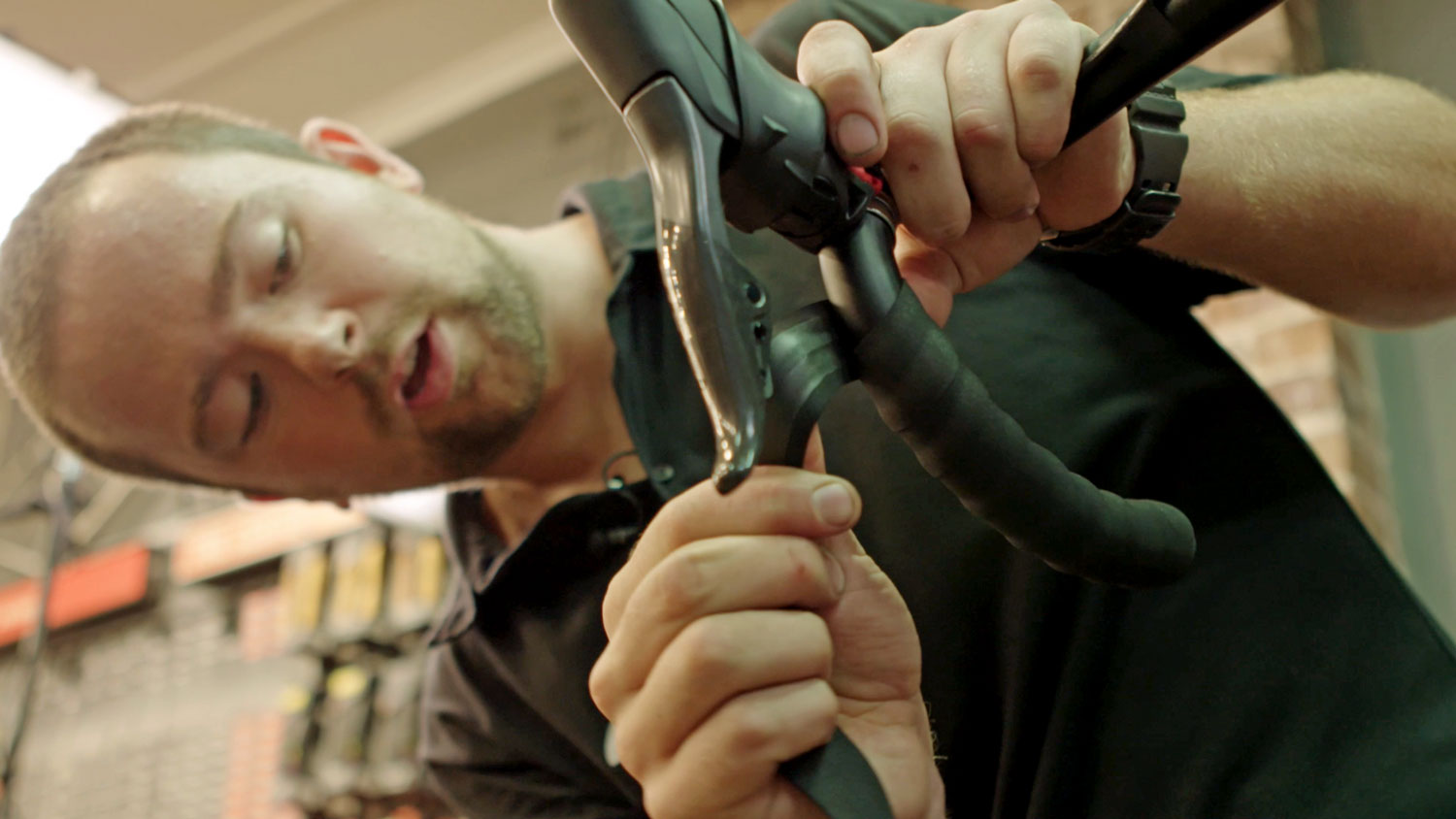 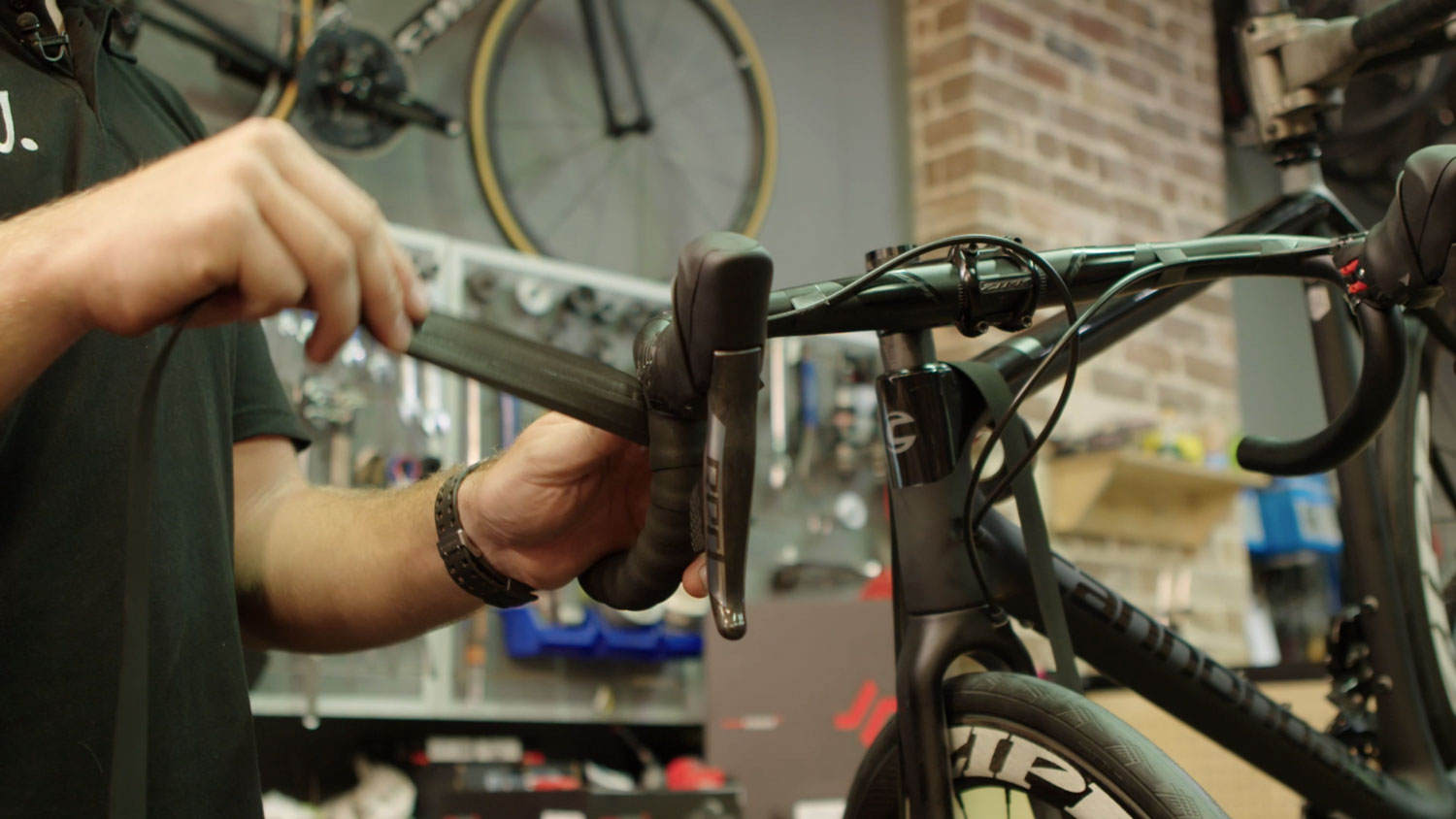 “You don’t really need to overcomplicate it; just overlap [the tape] by about a third each… and, as you go [towards the curve], you’re actually going to need to overlap more. But at the start it’s nice and straight.

“I use my left hand [to hold the wrap in place] so that I can actually bring the tape back around and not lose any tension on the tape.

“As I’m going, I’ll go back and forwards (putting the tape down and pulling it back up) as I’m just trying to line the tape up and keep it nice and neat.

“Once we get up to the bend, I’ll start looking at the underside and look to overlap by about a third to a quarter on the underside.

“Stretchier tapes are easier to wrap.

“We’ll just get up to the lever and there are a few different ways you can go around; some people use a short bit of tape – which is called ‘Cheat Tape’ – [but] you don’t generally need that. You can just do the usual way, which is the ‘Figure of 8’.

“Once I’ve got up [to the lever], it’s like I’m going to continue wrapping – but, obviously, the lever is in the way. So, I’m going to go over [the lever] and then make sure that I overlap the lever and then come back around (towards the base of the lever).

“If you have Cheat Tape, you would just keep going… but I don’t and we need to hide [the back of the lever]. So, I’m going to come back around and this is where it becomes like a figure of 8; I’ll go back under [the lever], and back to the inside of the bar.” 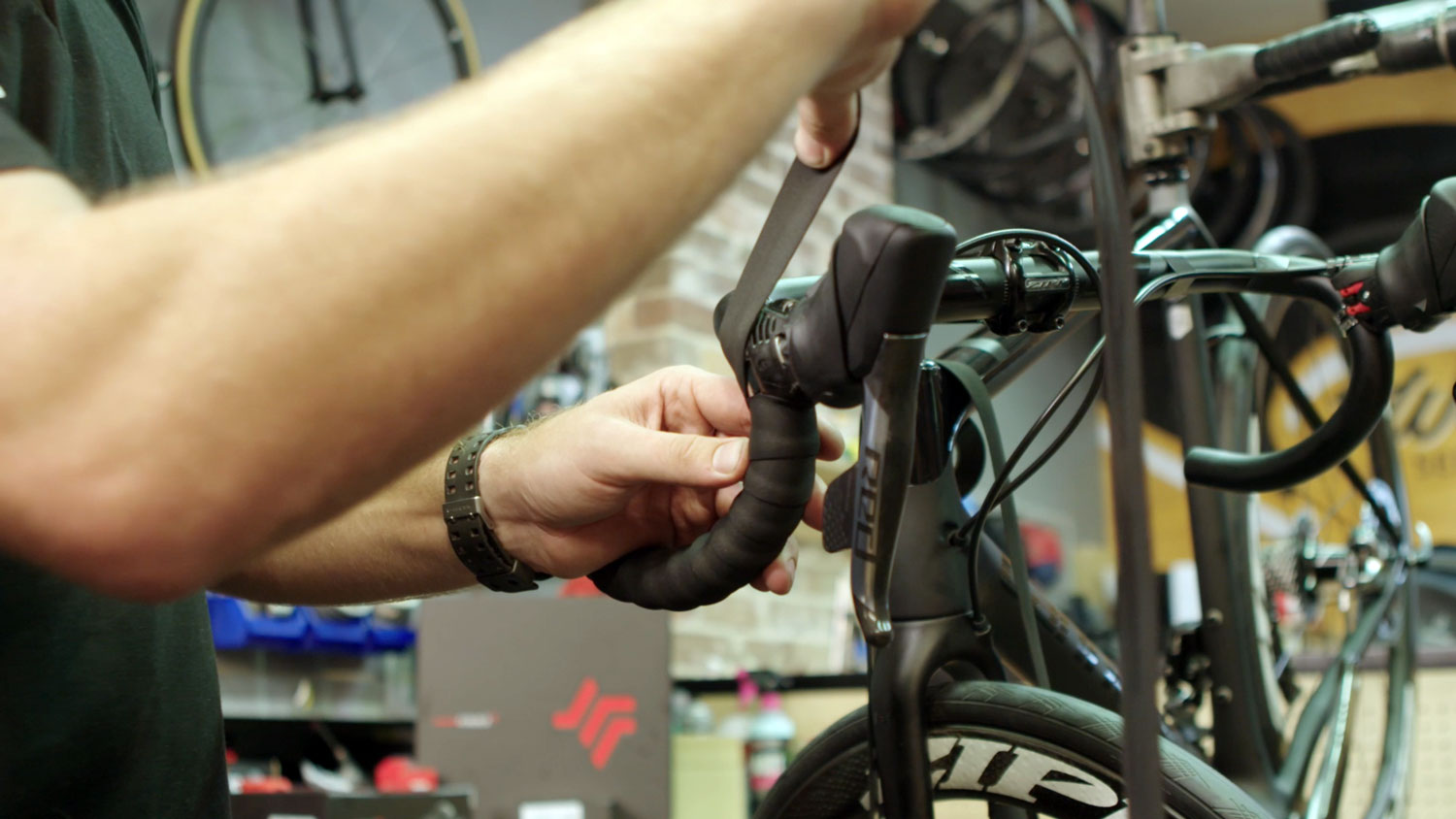 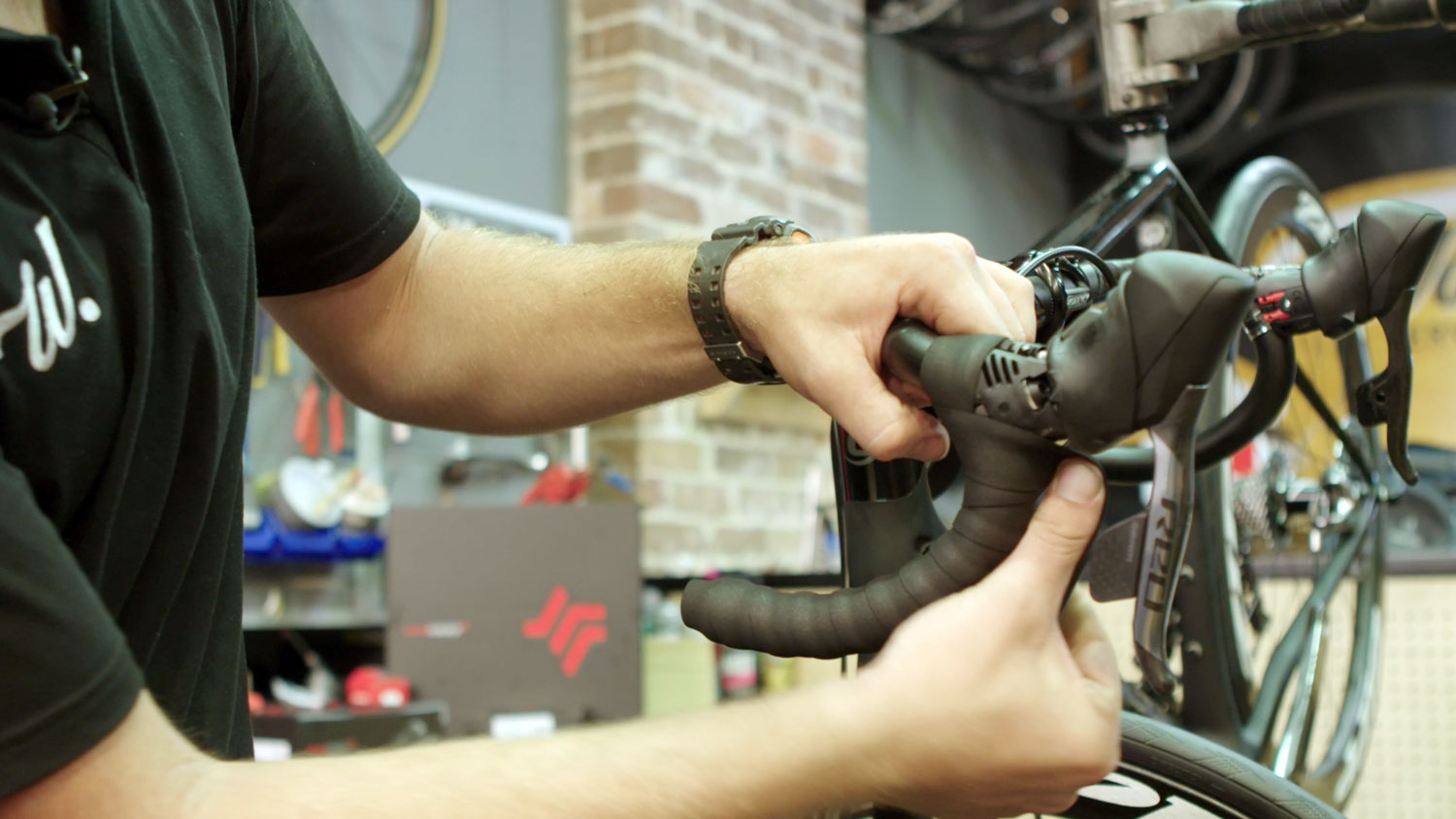 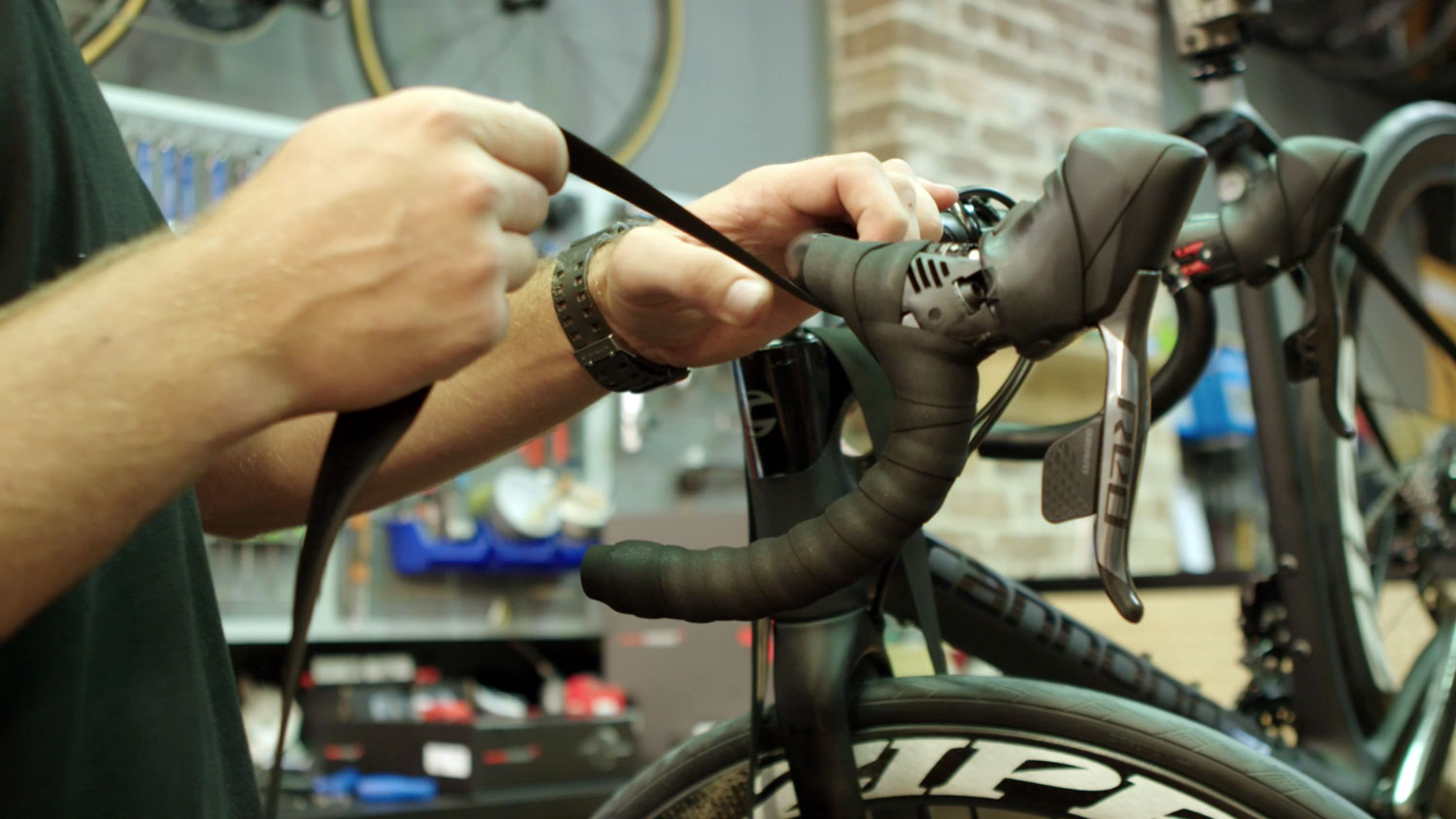 Past the lever and towards the stem…

“The same as when you’re on the bottom, as you make the turn, look at the outside edge and that’s where you want to make sure that your tape is overlapped a good amount because if you don’t, you’ll have a gap there, you’ll have a crease…

“You don’t need to worry about where it ends up on the inside because if you do it right on the outside, it will naturally end up in the right place.

“It’s a lot easier when [the bike] is in the stand.

“Then we just wrap all the way, still with just a little bit of overlap.” 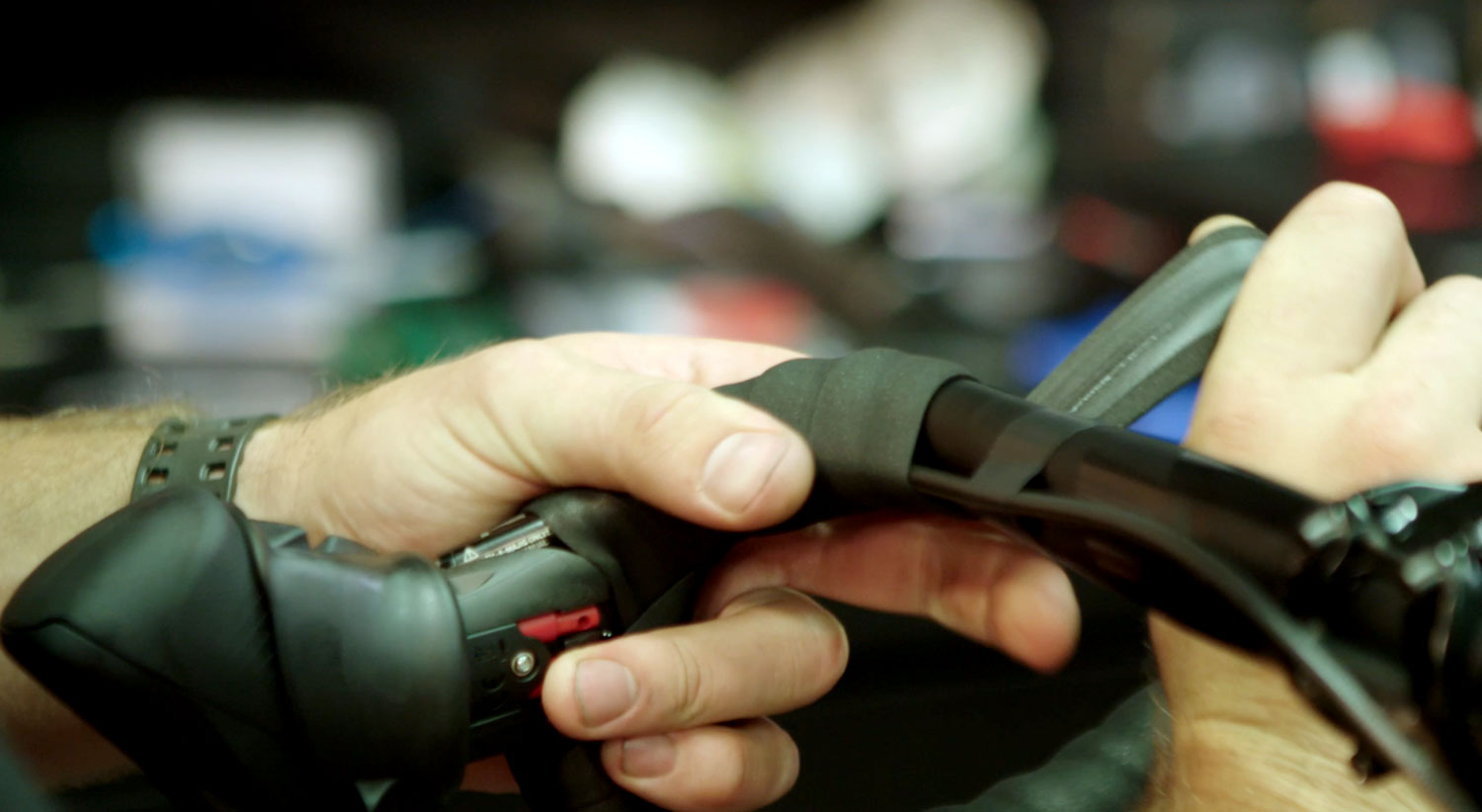 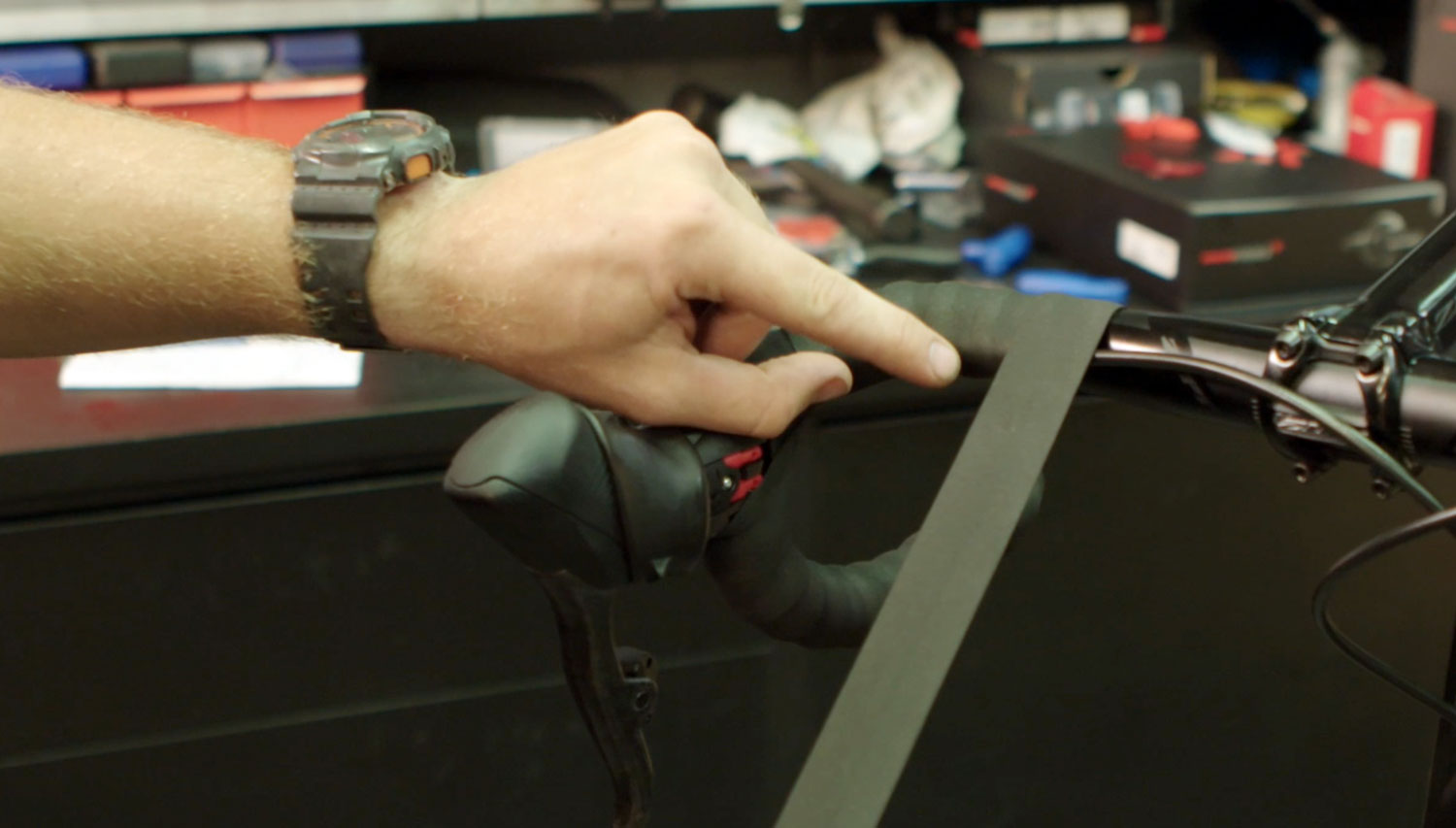 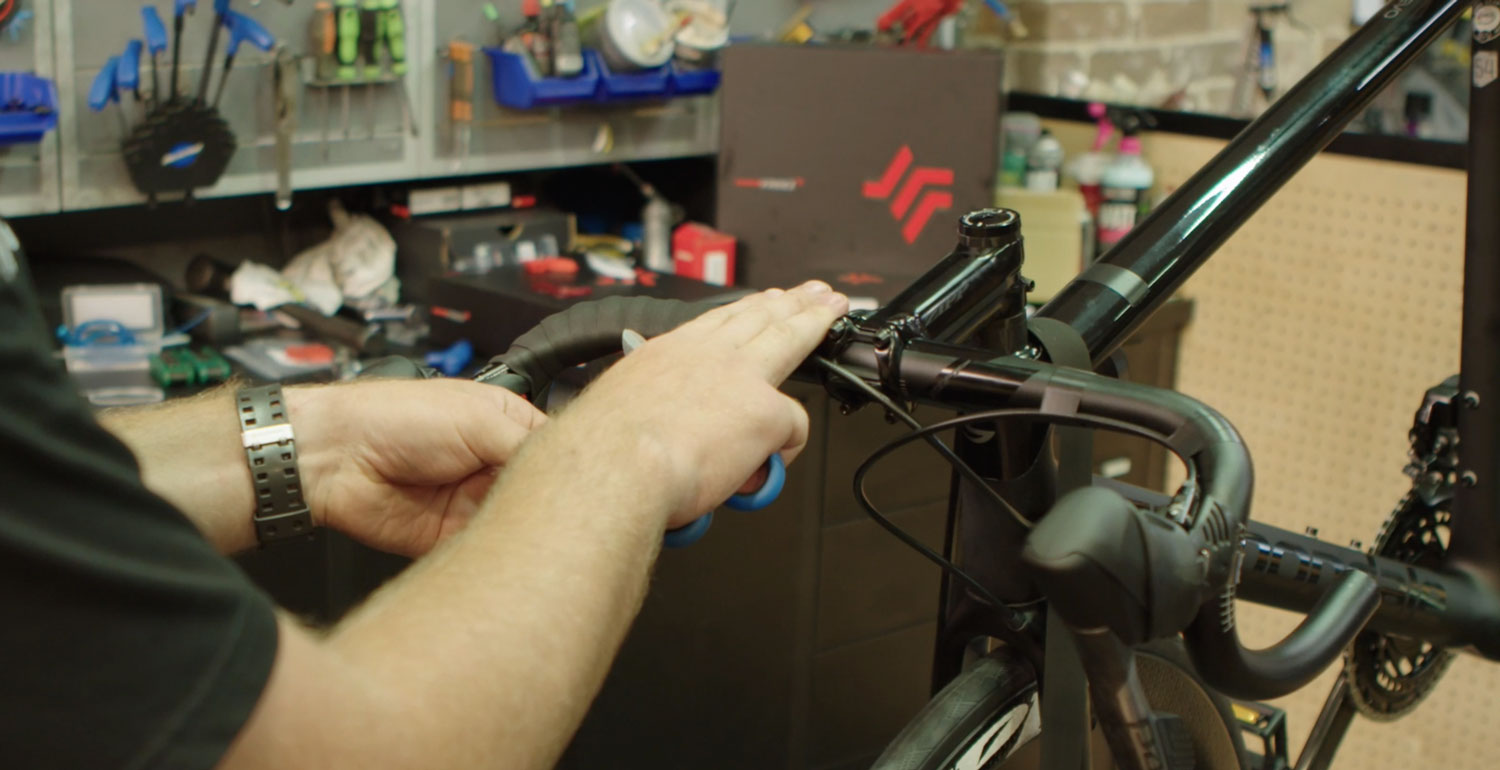 “If you want to have more padding and a little bit more comfort, you can wrap it a little bit tighter, so you’d give more overlap… but, generally, a third gives a nice, smooth feel without the bars being overly padded.

“If you’ve got an aero bar, you might finish earlier but on a standard handlebar, I usually go to [a width] of about three-fingers from the stem. It’s nice and easy.

“You can measure it, if you want to be really precise or you can go to a logo – which is pretty common – but generally I’ll be looking at about three-fingers’ width.” 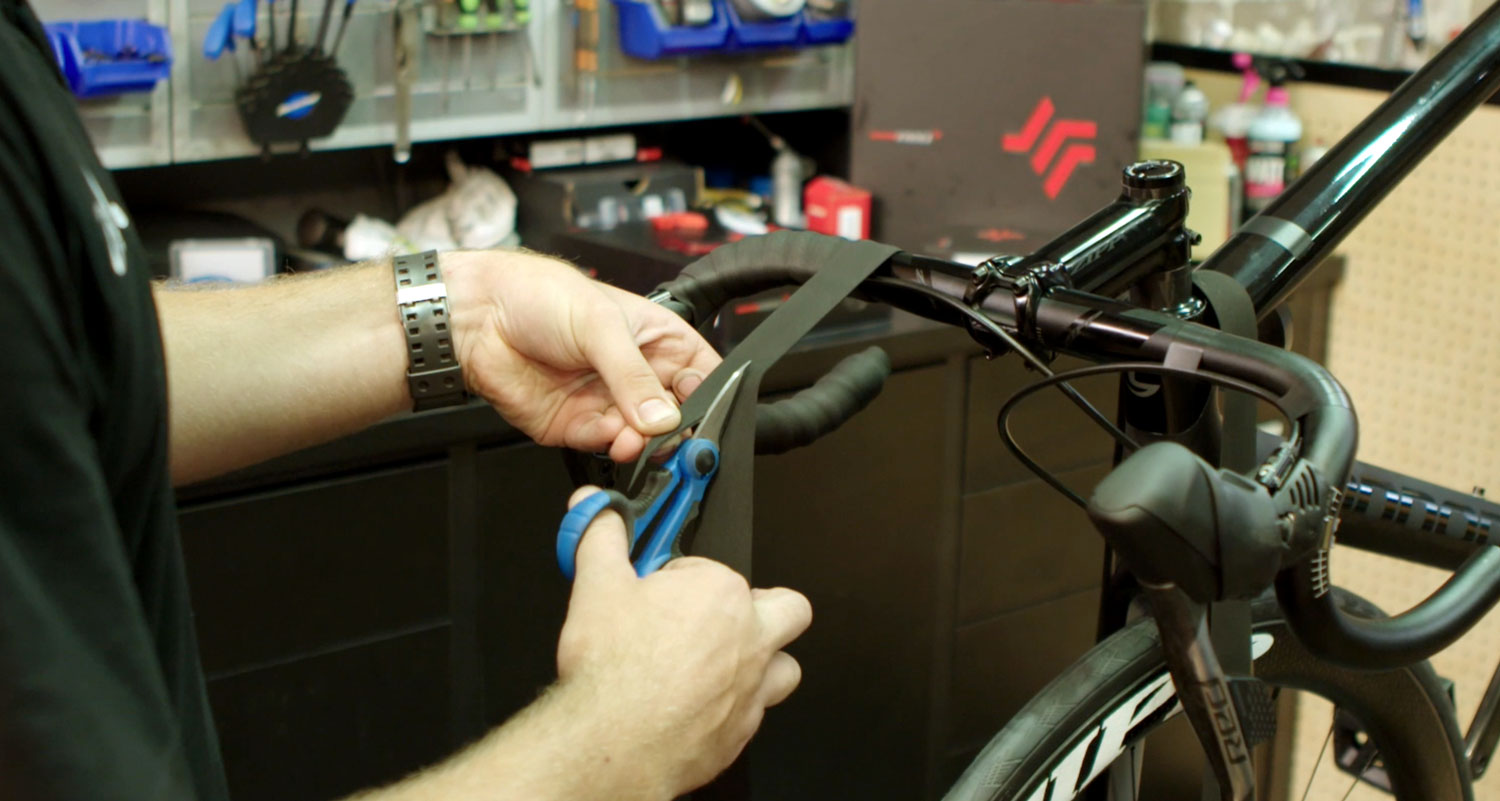 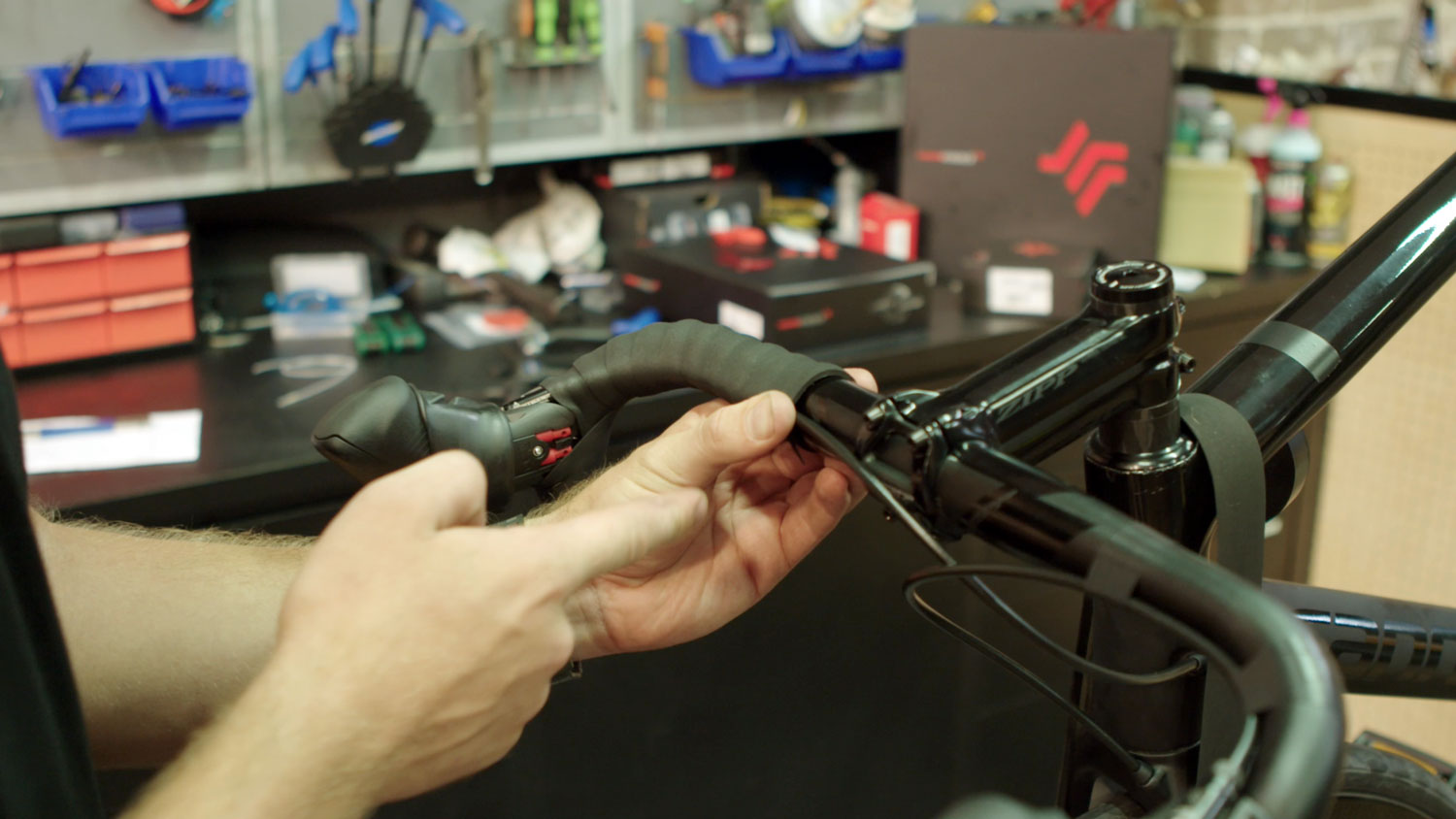 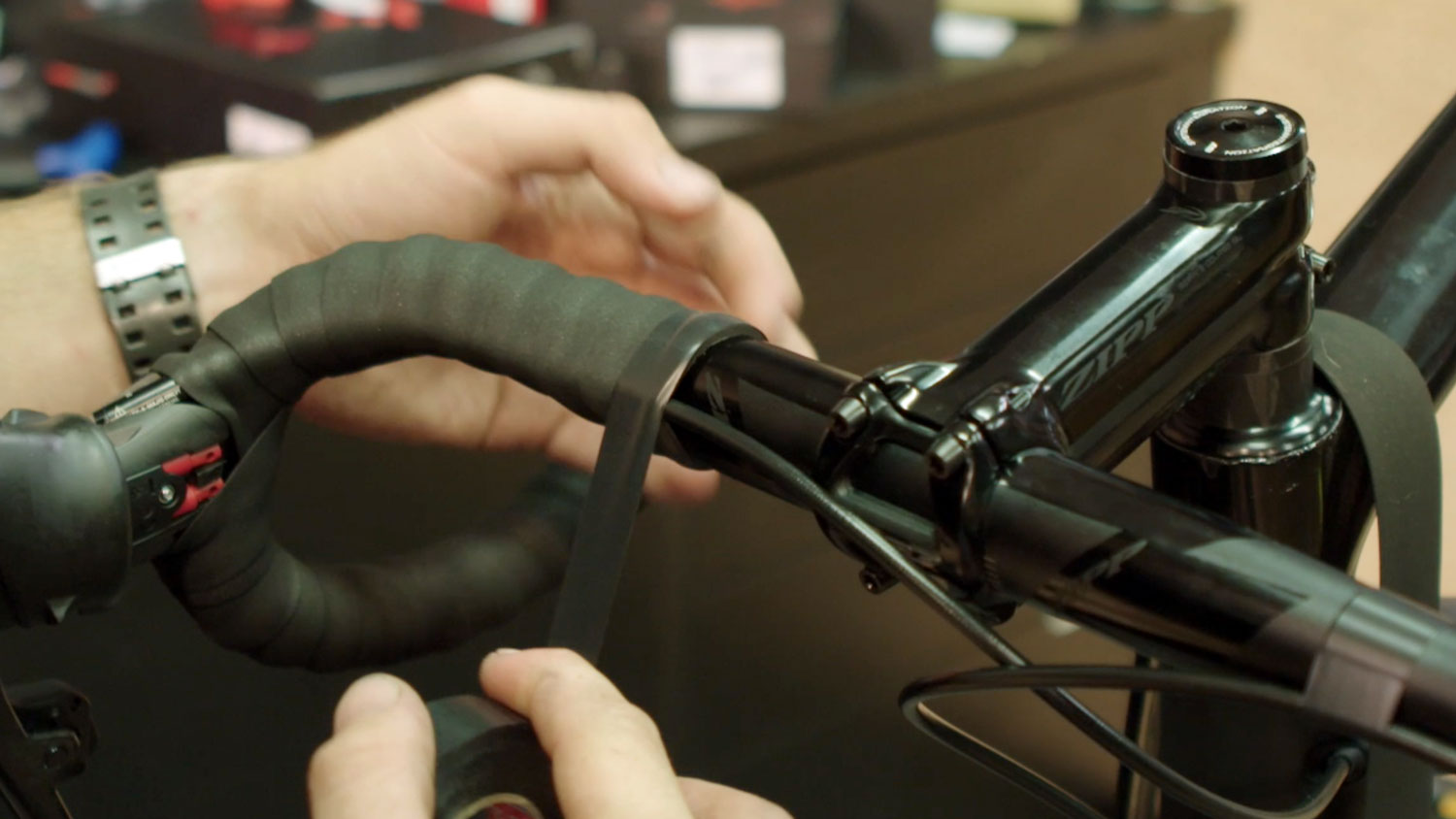 Finishing off: keeping a neat edge

“To cut the tape, hold it as though you’re going to continue wrapping and so that the line of the tape, coming off the bar, is parallel to the lines I’ve got [on the wrapped handlebar]; so I’m not holding it [out] straight, at a 90-degree angle…

“Where I want the tape to finish, I’ll imagine a line coming out [from the handlebars] at 90 degrees, and I will cut [the excess tape] straight in on that line. It will give us a nice, smooth finish.

“I’m just using the electrical tape to stretch and mould itself to the bar tape.

“Get your scissors, cut the electrical tape off. And then it’s all good.”

Plug in the bar ends, tucking in the excess bar tape, and complete the other side. Then it’s time to ride.