Remember where you were on 15 April 2007? Australian cycling fans will likely know the answer: they were screaming at the images on their TV screens late at night because Stuart O’Grady was having the ride of his life.

Australia’s history of near misses in the Classics is over! The moment came when Stuart O’Grady threw a victory salute while crossing the finish line on Roubaix’s famed velodrome at 4.59pm on Sunday 15 April 2007.

He raced onto the track with an advantage of one minute over his nearest rivals.

He had enough time to give his team manager, Scott Sunderland, a high-five on the traditional closing lap, but when it came time to raise his hands and accept the adulation he was overwhelmed by emotion.

“I always believed I could do it,” said the veteran while is competing in his 12th season as a professional.

“I wouldn’t be here racing today if I couldn’t win a Classic. It’s my sole focus now so I was really confident that it could happen.” 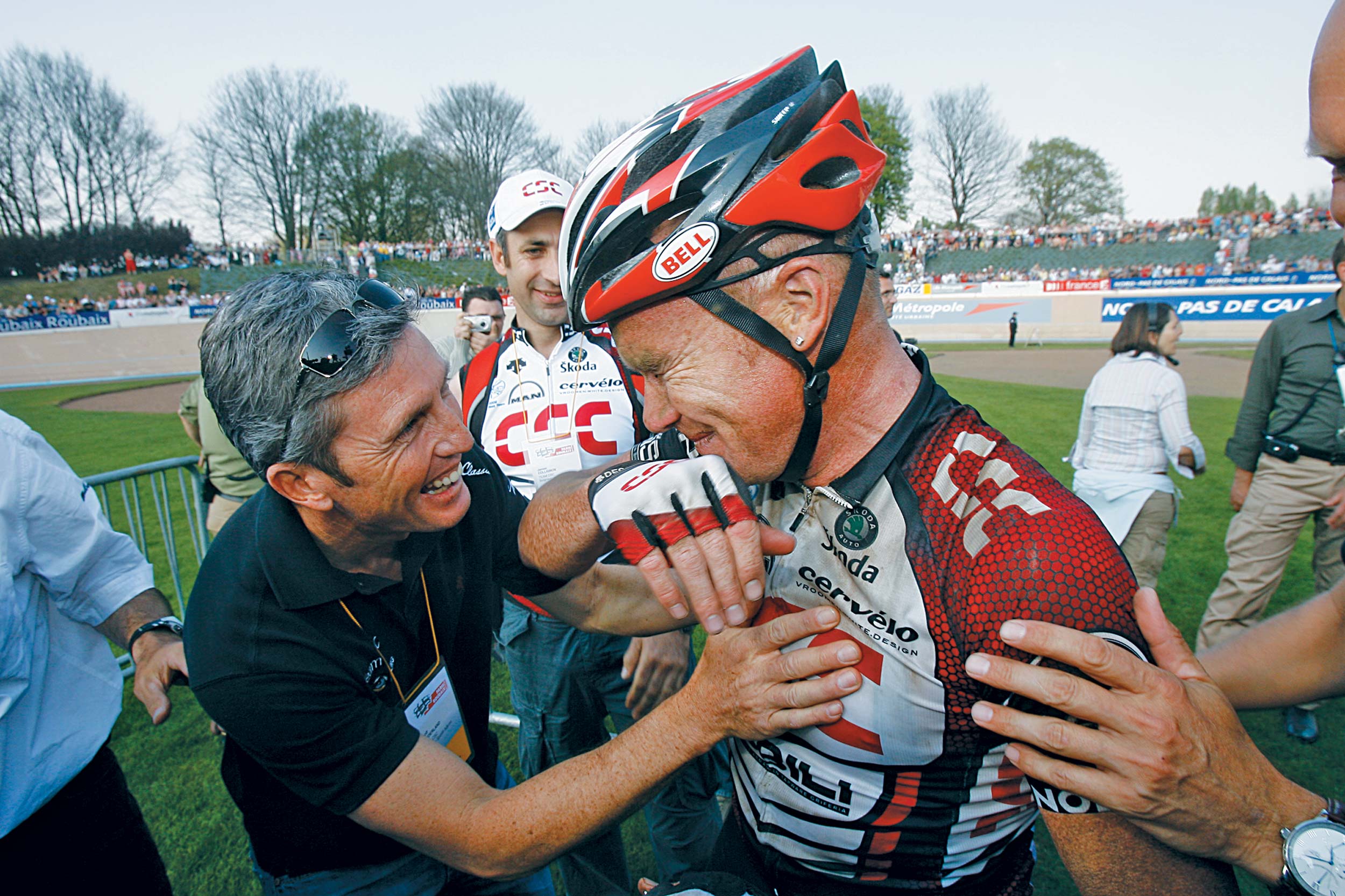 Scott Sunderland was the first to congratulate Stuart O’Grady on his victory in the 105th edition of the world’s most celebrated one-day race, Paris-Roubaix (above).

When he reached the finish of the 259km race, however, his dusty mits covered his mouth as though he was disguising a profanity.

His is a pioneering career. O’Grady was in the pursuit team that smashed the world record at the 1993 world championships, only two weeks after he turned 20. He turned pro 17 months later and, in 1998, became only the second Australian to wear the maillot jaune at the Tour de France. He has won stages of that Grand Tour, major one-day races and even an Olympic gold medal in the past, but none of these considerable accomplishments matches the elation of a Roubaix victory.

This is a true monument of cycling, a win for the archives. It’s something that will be talked about for generations. 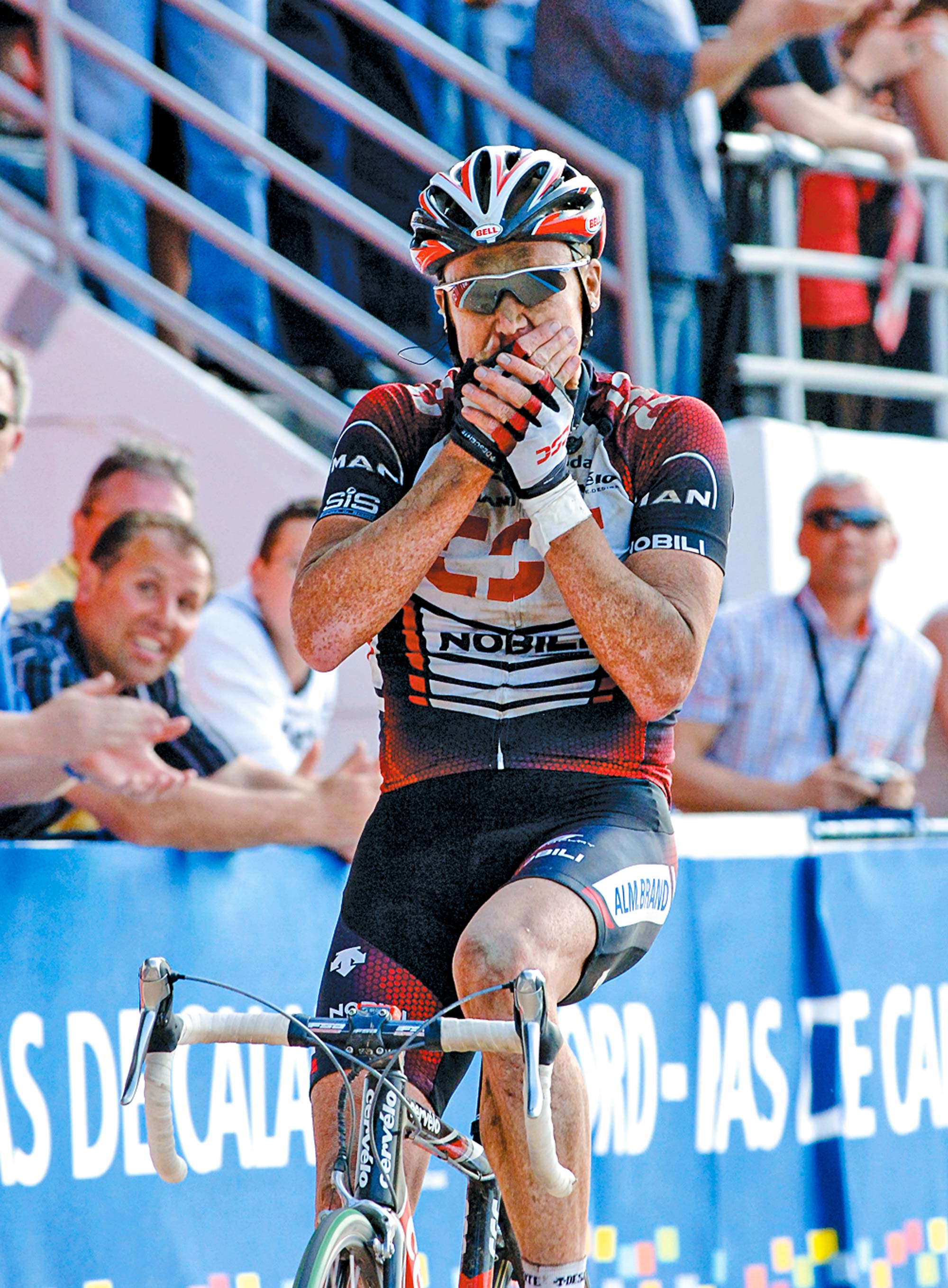 “The conditions suited Stuart better than most,” explained Sunderland, who has called the tactics in Roubaix for the CSC team on two successive occasions and won the title both times.

A quick discussion with the former pro is all it takes for you to realise how O’Grady’s win – or Fabian Cancellara’s one year earlier – didn’t happen by coincidence.

“First of all there was the heat,” said Sunderland in a quirky accent that’s more Flemish than Australian these days.

“There was also very little wind so it was going to be a very fast race which is much better for Stuey. The way it was, he had to ride on the cobbles alone. This really suits him. 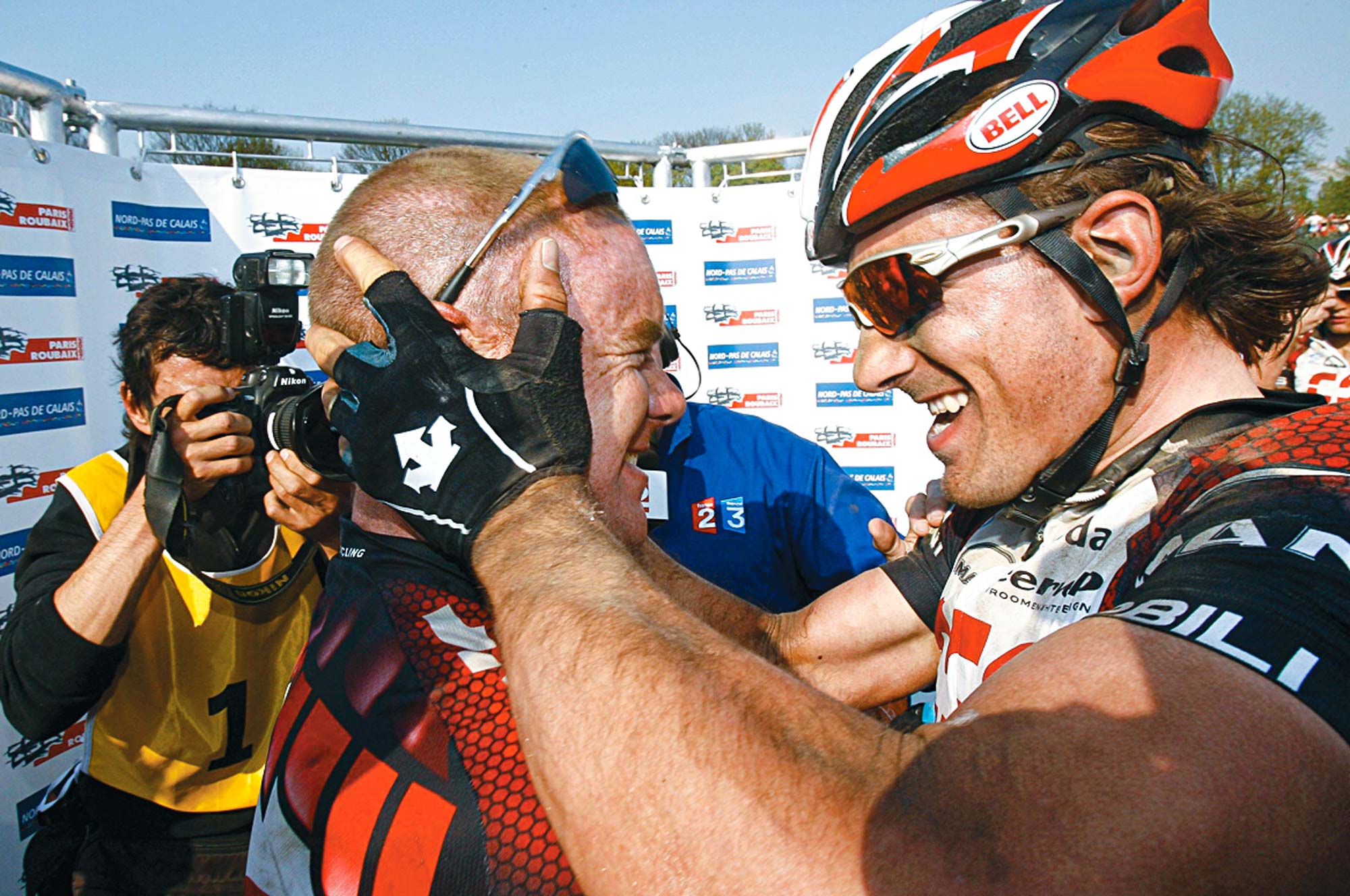 The next in line to congratulate O’Grady was last year’s winner Fabian Cancellara who interrupted the live television interview with his team-mate to embrace his freckled friend. “This is what I’ve dreamed about for years,” said O’Grady.

Gone are the days when O’Grady talked about winning the Tour’s green jersey. He’d been close to that prize before, finishing second in the sprinter’s classification three times since his debut in the Tour 10 years ago. By 2007, he had found his calling and is part of a team that’s willing to help him realise his objectives.

“My body feels like it has just been in a car wreck,”  he said the day after his victory before repeating his goal for the twilight years of his racing career. “Winning Classics, more Classics!

“I really feel like I could win most of the big ones on the calendar.

“I’ve only just started my collection.” 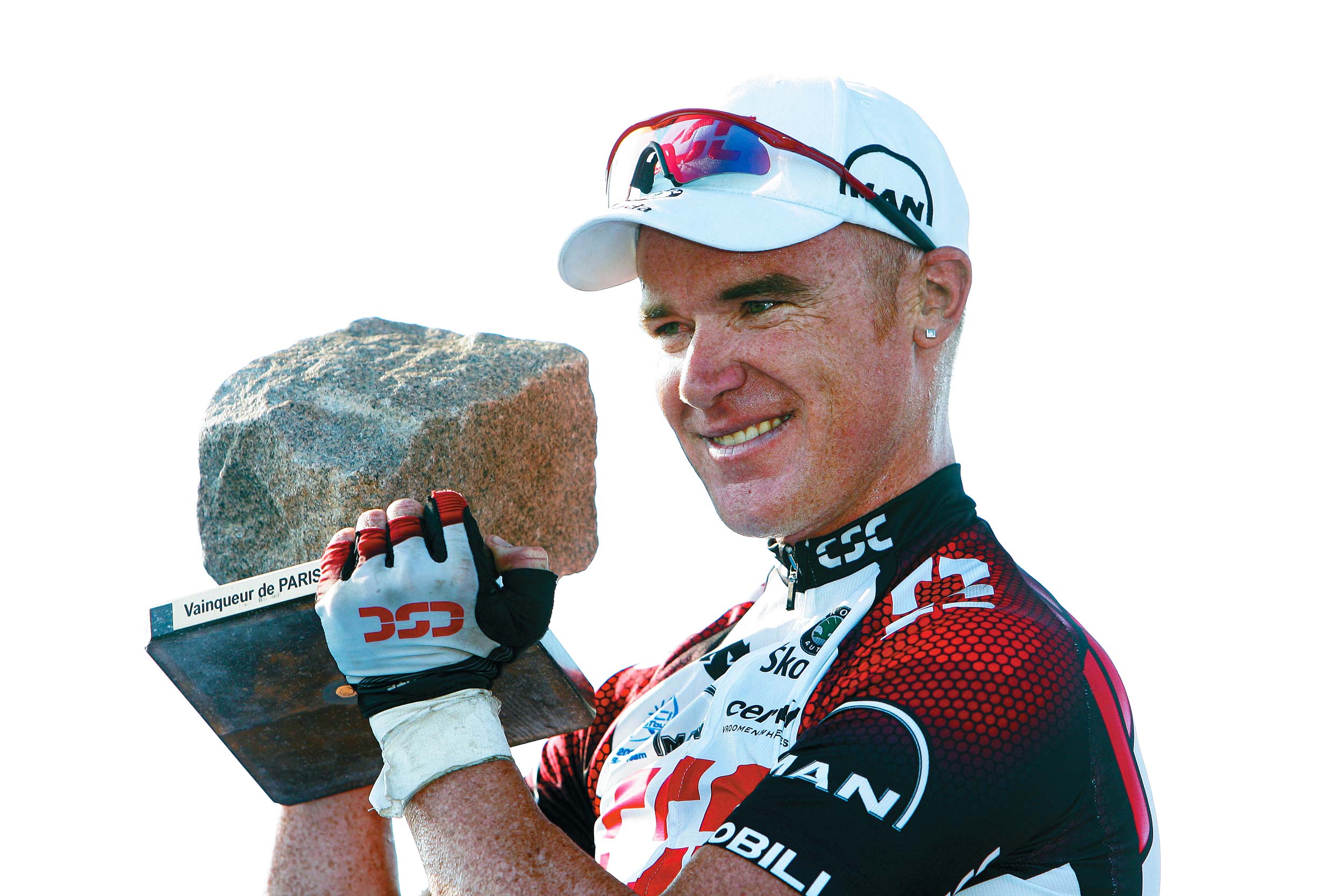 Moments after he finished, and before the majority of the field had reached the velodrome that concludes this torturous test that includes 65km of cobbled roads, O’Grady explained his obsession.

“This is the race I watched on video when I was young, it’s what made me want to be a pro cyclists…”

Before he could finish the sentence Cancellara stormed onto the set and interrupted the interview.

The winners of the last two editions of this so-called Hell of the North embraced each other; the millions watching on television could wait. This was their moment. 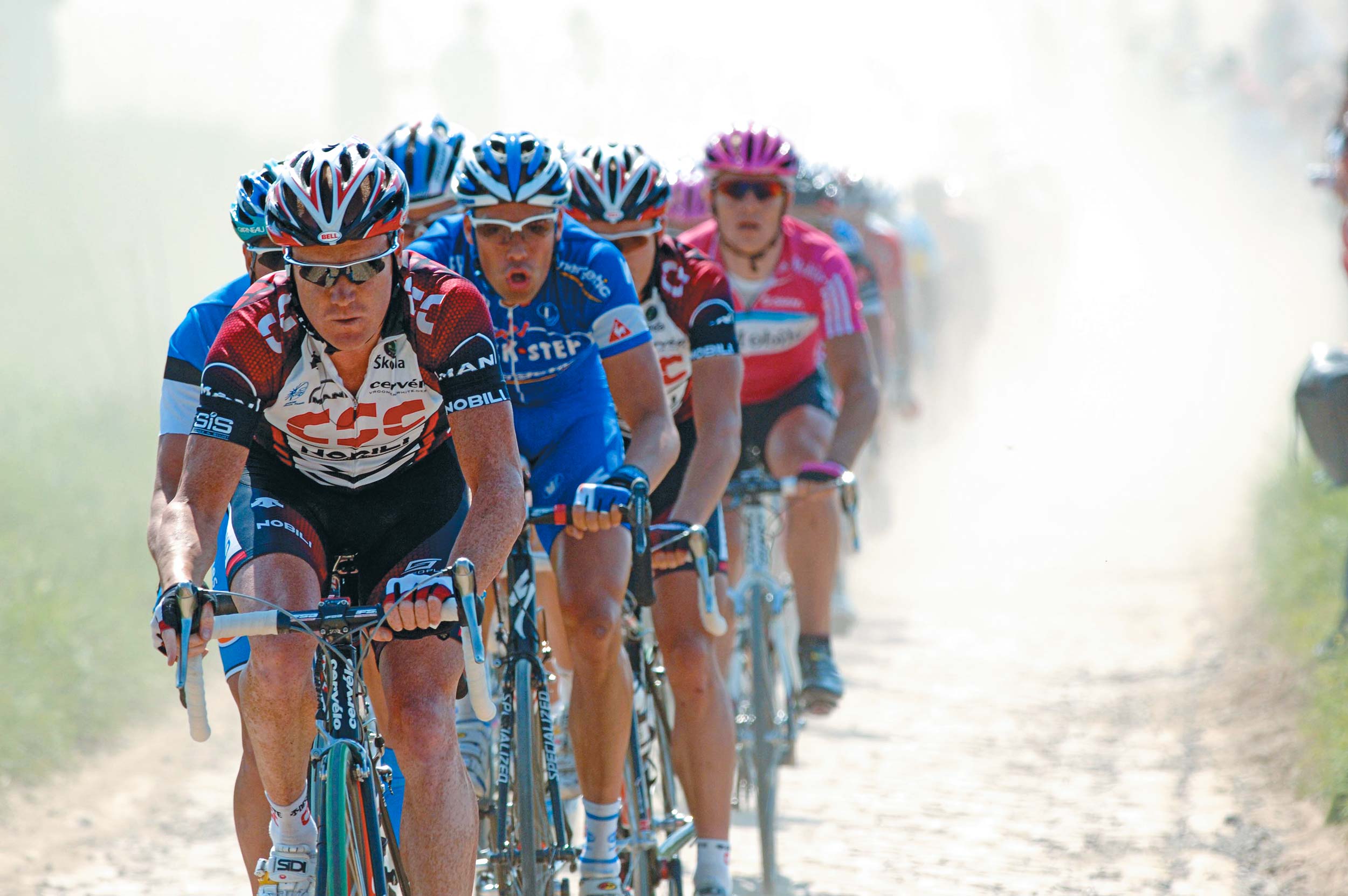 In 2007, Paris-Roubaix was still not broadcast live on TV in Australia… unless, of course, you had a satellite dish or some other way of intercepting Eurosport (which, at the time, was not even part of any pay TV options in Australia).

It was O’Grady and others from his generation who helped SBS Television realise cycling’s appeal and commit to a live broadcast of the Tour. The Classics were the obvious next step.

It took over a decade of coverage of highlights packages of the three week-race before the consistently good ratings figures prompted the network to go to the next level. The one-day races promise a similar cult following, so let’s hope that a possible encore performance gets the coverage it deserves.

(Note: SBS TV did, in fact, take the live images for future editions and, until 2020, it has been broadcast live in Australia.)

The script of the 2007 edition starred the Australian from start to finish. He rose to play the lead role to perfection.

His reward was a standing ovation and the adoration of fans around the world and, after the high-five from Sunderland, the realisation of a dream began to sink in. This was illustated during his victory salute – hand up, hand down, a quick grab of his nose before rubbing his stomach and crossing the line to complete the triumph.

One of the gestures in the final 100 metres hinted at what is just around the corner for the O’Grady family. His wife Anne-Marie is expecting their second child; the due date is in August, a week after Stuart’s 34th birthday. 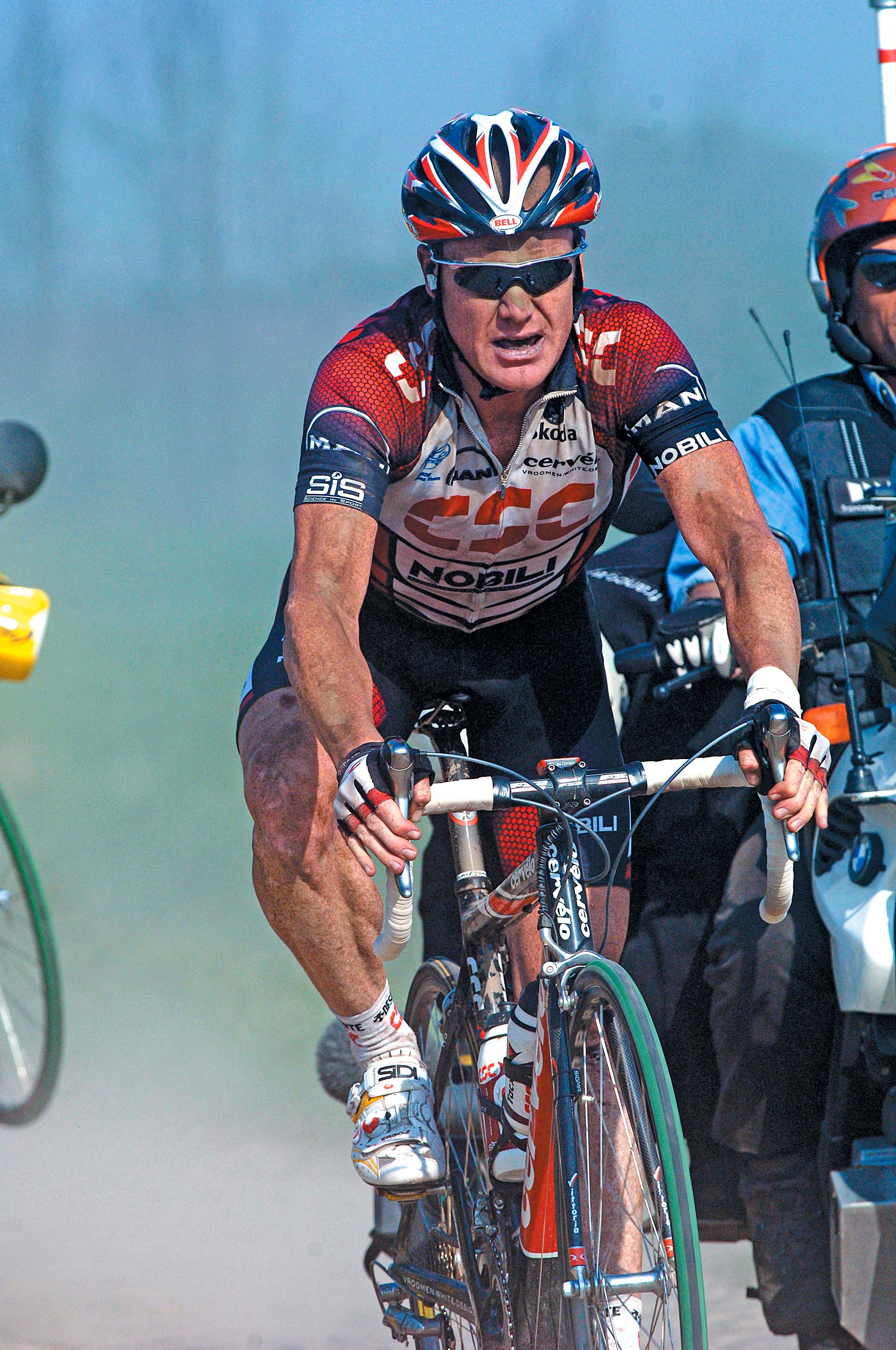 Three years ago when he first finished on the podium of a major Classic he was riding on the inspiration provided by the news of Anne-Marie’s first pregnancy.

“I realised that it was time to start taking charge of my life,” he said back in 2003 when he finished third in the Ronde van Vlaanderen.

“If I was going to be a dad, I wanted to make sure that I’d done something that the little fella could be proud of.”

On the infield of the velodrome in Roubaix, Seth O’Grady was there to see his papa create Australian cycling history.

The victory in Paris-Roubaix 2007 happened thanks to a cunning plan formulated largely by Scott Sunderland, who takes up the story.

“We’d seen with the Tour of Flanders a week earlier that, because of the lack of wind and the warm temperatures, the race changed from the normal battle against the elements,” said Sunderland. “We saw that same thing in Gent-Wevelgem when there were four Spanish riders in the first 10… that’s almost unheard of.

“The forecast was showing that there’d be very little wind and that’s when I thought, ‘Okay, let’s do something different to what the other teams are expecting from CSC.’

“With all the hype surrounding Fabian Cancellara,  because he showed how strong he was going to be in Paris-Roubaix, everyone was saying, ‘Cancellara, Cancellara…’ and I knew we couldn’t just sit back and just ride this for Fabian.

“We had to be aggressive at the start. I wanted four riders to go on the attack early: Marcus Ljungqvist, Allan Johansen, Matti Breschel and Stuart O’Grady. Luke Roberts and Kasper Klostergaard were to work if there was a break – they had to close it down quickly.

“As it turned out, 34 riders went away and CSC had three in there.

“It didn’t really hit home at the time that there were so many good teams up the front. T-Mobile were in the same position as us so that put the pressure on Rabobank and Discovery.”

The escape came early. After 31km the group was gone. By the start of the pavé sectors the advantage was over five minutes. O’Grady had Breschel there as planned, but Roberts also happened to be part of the initial move.

“Roubaix is the one Classic where it can be beneficial to be in an early escape,” said Robbie McEwen about the race he didn’t contest but watched on television.

“The group this year tapped out a steady rhythm and there’s not the panic that those in the peloton suffer on the approach to the pavé sectors. Tom Steels told me he likes to be up front; that’s how he has finished second before and he was there early this year.”

The weather did play a role. The time gaps slowly dropped and a puncture in the Arenberg Forest for O’Grady meant he was caught by some favourites but CSC still had a plan.

“We spoke about attacking on the Mons-en-Pevele,” said Sunderland about the secteur 48km from the finish. “We wanted O’Grady to give it full gas.

It was a really good opportunity because we had Lars Michaelsen in the front with Breschel. But the opportunity didn’t really arise. Stuart crashed on one of the corners but was able to jump up quickly and get back onto the group by the end of the pavé.

“He didn’t hurt himself, just a bit of skin off his knee. It was more that the timing was bad and it cancelled our plan.

“Shortly afterwards Wesemann attacked. Stuart followed. They went across to the lead group and there was another attack… Stuart countered and found himself in front.

“He really didn’t expect to be alone at that moment and thought there’d be one or two riders who would’ve joined him. He just showed how strong he was on a very big day.

“He had a very substantial break after the Carrefour de l’Arbre, the last of the difficult sections, and held it all the way to the finish.

“Quickstep had a couple of good cards in its hand having two in the initial move, so they probably had a bit less pressure than the others,” Sunderland added.

“Tom was going to be the main man and watch Cancellara. For us it was perfect; Fabian just had to sit and wait.

“He wasn’t on a super day anyway, but the weather was well and truly against him – any part of his shirt that was black was covered in salt. It wasn’t a good day for Fabian and he was quickly able to convey that to us and his team-mates who could ride on and do what they had to do.

“Lars Michaelsen rode a fantastic race and he thoroughly deserved to be up there. I’d thought about it earlier in the week – with the riders we had, and I wasn’t joking or being over the top, a one-two-three finish was possible for the team. Failing all those punctures, it would’ve been a a realistic possibility. Without Lars’ crash on that second last section he should’ve definitely been on the podium with Stuart.”

Like it did for Cancellara 12 months earlier, Team CSC was able to unlock a rider’s potential and reap the rewards on offer. O’Grady’s performance is just another example of this.

“When Stuart was still at Crédit Agricole I thought he needed to change direction, going from sprints to one-day races. He realised this was what he needed to do.

“He rode more one-day races with Cofidis and when he came to this team we talked about it and said, ‘Stuart, you need to start placing focus on Classics from Milan-San Remo through to Paris-Roubaix’.

“Unfortunately last year with his crashes there wasn’t any fruit from Spring but this year he really worked hard all the way through from winter. He’s got wh ere he is now and he’s very appreciative of all the guidance. With the form and condition he’s got it makes things a bit easier.”

*This feature was originally published in April 2007.