SBS contemplating changes to coverage of Tour de France in 2020

The broadcaster of the Tour de France in Australia, SBS TV, recognises that coverage of the race in 2020 is going to be significantly different.

On 15 April news finally emerged about the prospects of the 2020 Tour de France: ASO announced that it would suspend the race by 63 days and aim for a start date of 29 August instead of 27 June. All other elements of the three-week event, the organisers say, will remain the same.

RIDE Media, as publisher of the Official Tour de France Guide (Australia/NZ edition) has been in regular contact with ASO/L’Equipe, requesting updates on any potential changes because of the exceptional circumstances that exist in 2020.

What seems certain is that, despite having attended every stage of the Tour de France since the prologue of the 1998 race, my personal record of on-going attendance (yep, 431 successive stages, plus 11 prologues) has come to an end. The Tour has become a huge part of my life and yet travel restrictions tell me that this fabulous annual trip won’t be possible, not this year.

Curious about how international media are approaching the prospect of needing to alter their coverage of the Tour, RIDE Media has been surveying others who are also usually on the ground in France. Alas, like myself, there are many who are uncertain about how to manage the logistical challenges associated with attending the event.

It is too early to say what will happen by the end of August but we can assume that, like everything else this year, compromises will be required, even from media organisations that have built a large, loyal following thanks to the interest generated by the Tour de France.

According to ASO, the Grand Départ of the 107th Tour will be in Nice on the last Saturday of August 2020, then finish in Paris 22 days later. In between, there will be 3,470km entirely within the confines of France, as per the original itinerary. The issue now, however, is that this year there will be significantly more elements for the race organisers to manage.

The start is 122 days away but France remains in lockdown. That said, French cyclists are told that they will be allowed to ride outside from 11 May when the government plans on loosening some lockdown measures that have been in place since mid-March.

There are many questions about what comes next but ASO continues to plough on with preparations for the Grand Départ in Nice.

Optimism is necessary during uncertain times, but so too pragmatism. For Ken Shipp, head of sport at SBS TV, decisions will soon have to be made about how to manage what is already a complicated broadcast production.

“The Tour is a huge logistical undertaking for rights holders,” Shipp told RIDE Media. “Several months always go into the planning and preparation for our TV and digital coverage of the event.” 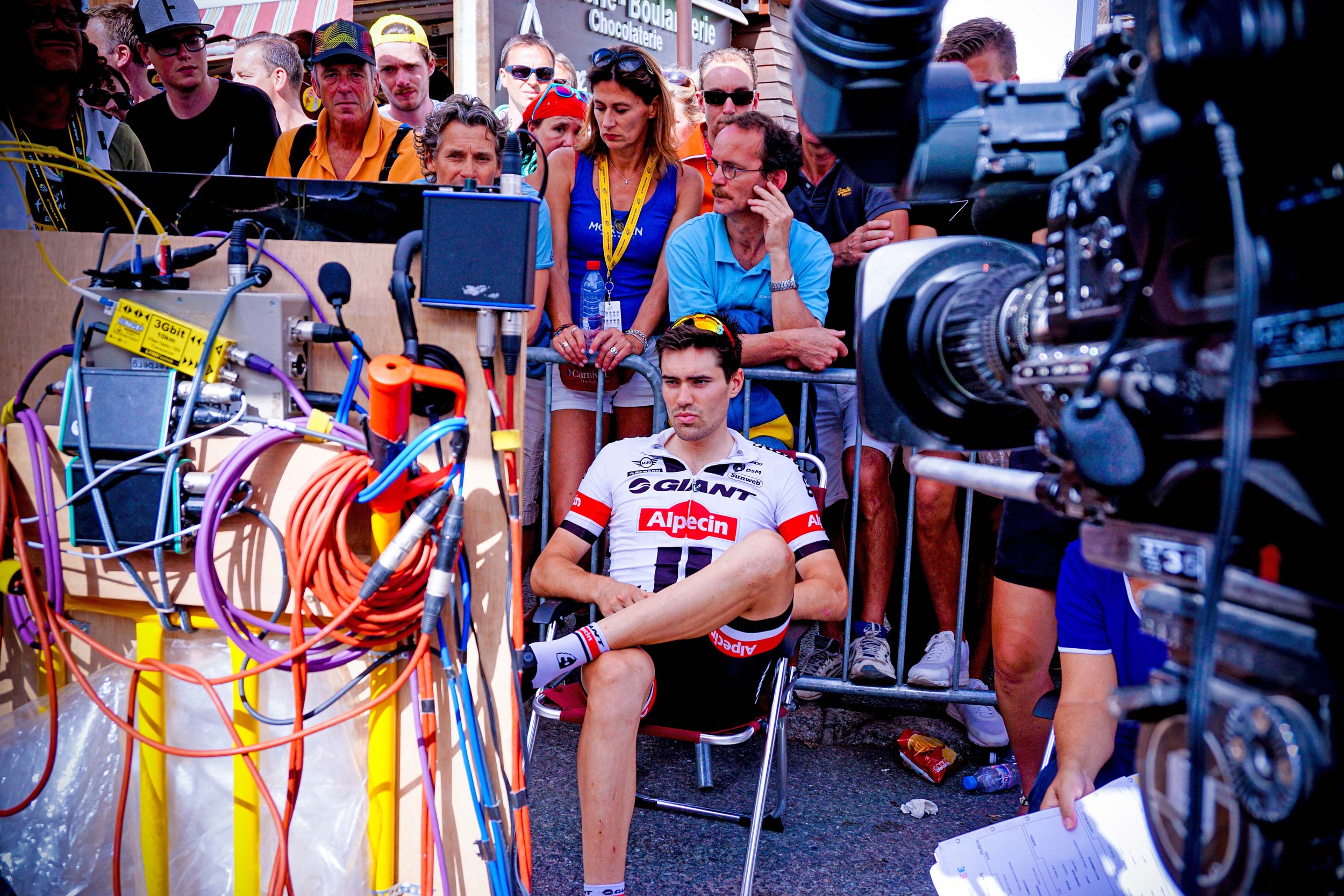 How we watch the Tour is going to be a lot different in 2020… (Photo: Rob Arnold)

If all goes to plan, there will be 22 teams with eight riders each at the start, adding up to a peloton of 176 riders from all over the world.

The competitors create the spectacle, but there is a far greater contingent of personnel required to ensure the race gets from start to finish without any hiccups. Thus, something that is already difficult to organise, becomes even more complicated because of COVID-19.

The defending champion, Egan Bernal, is the race’s first Colombian winner. This week he was given clearance by his local mayor to go training outdoors on roads around his hometown of Zipaquirá. That’s one skerrick of good news at a time when athletes from all sports are facing uncertainty.

Still, it’s too early to say if Bernal and many others who are expected to contest the Tour de France in 2020 will be able to make the trip to Nice for the late-August start. The same concerns exist for others, like Shipp and SBS’s regular reporters and production crew who attend the Tour.

“We already know that international travel is highly unlikely to return to any degree of normality in the time between now and the start of the Tour,” Shipp told RIDE Media.

But the Tour is a special sporting beast, something that traditionally yields strong ratings for SBS which has hosted the broadcast in Australia for 20 years.

“As the world’s premier road cycling race, the Tour is the crown jewel in our cycling offering,” says Shipp.

“Every year we can guarantee strong interest from a very dedicated audience who are all prepared to stay up late every night for three weeks in July. It’s an annual appointment for so many Australians – and for SBS it’s been a core part of our schedule since 1991.”

The intention is that, if the show is on the road, the race will be on your TV screens. But how you see the Tour in 2020 is going to be different.

Shipp knows the requirements for coverage of the race; he has been part of the SBS production since the network secured broadcast rights way back in the early-1990s and he remains closely associated with ASO because of a long relationship that was founded on coverage of the biggest bike race of all.

“We are still working through plans for our coverage of the Tour de France 2020 and hope to announce more soon,” said Shipp when asked how he imagines the broadcast will come together in a few months.

Commentary of Le Tour with a strong Aussie accent

The Australian accent is now part of the soundtrack of the Tour de France and SBS’s connection is a strong one. Since 2017, the English language international feed has featured the voices of Matt Keenan and three-time green jersey winner, Robbie McEwen.

The voices of the two Australians have been heard calling the victories of Chris Froome, Geraint Thomas and Egan Bernal. Even with the chance of travel restrictions still being in place in August, Shipp believes that – should racing go ahead as planned – Keenan and McEwen will still call the action of Le Tour 2020.

“Of course, we’d love to have our usual crew on the ground in France but that might not be an option in 2020,” Shipp told RIDE Media. “We’re working through plans at the moment and will have more to share closer to August.” 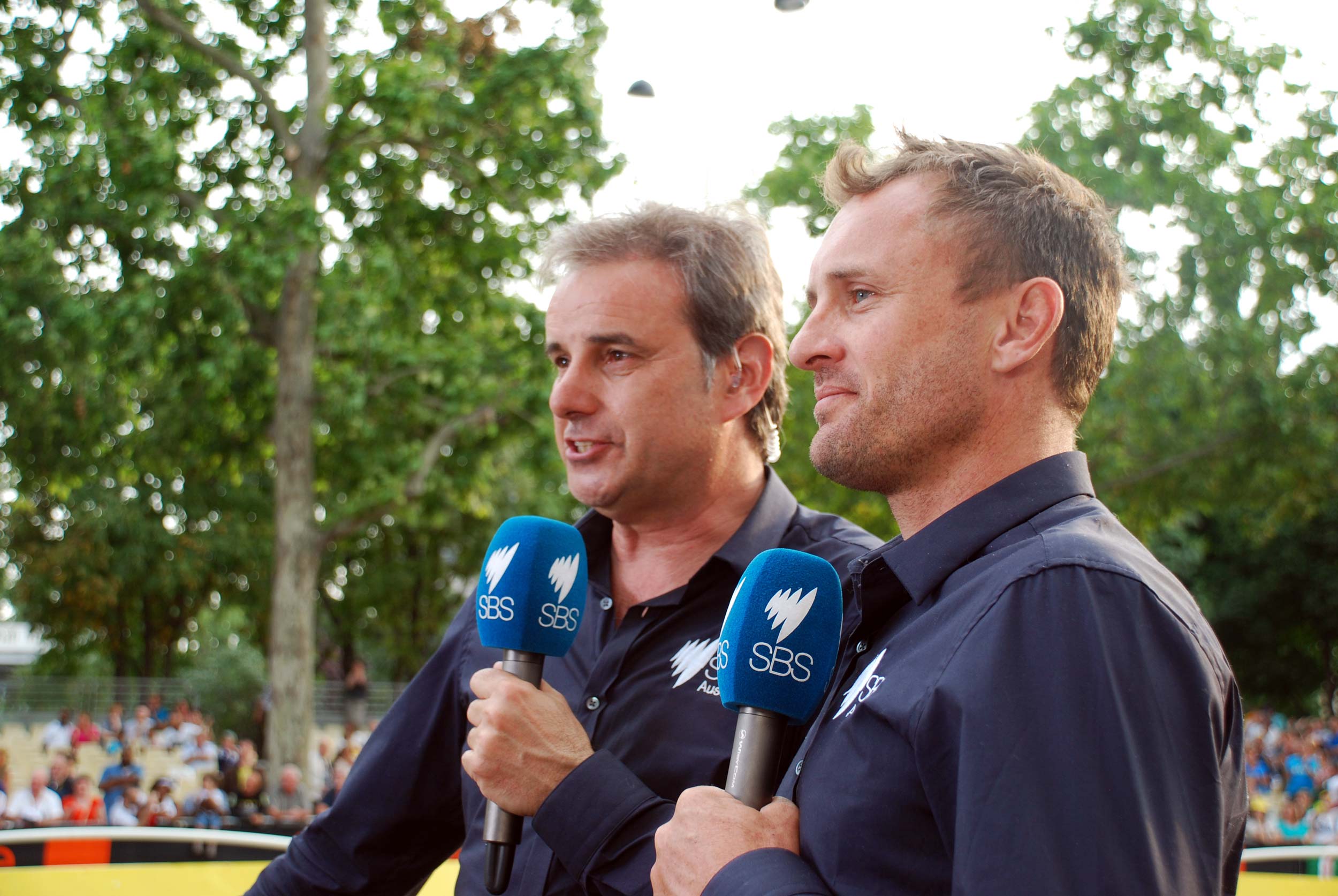 Another former green jersey winner from the Tour de France who has done commentary for SBS TV is Baden Cooke, pictured here with Mike Tomalaris in 2014. (Photo: Rob Arnold)

An opportunity to invigorate Tour coverage

The arrival of the Keenan/McEwen commentary combination heralded the end of a celebrated partnership. For many years beforehand it was the traditional cycling commentary duo, Phil Liggett and Paul Sherwen, who provided the soundtrack to the Tour – in Australia and beyond.

Sadly, one of those voices fell silent in December 2018; Sherwen passed away after suffering a cardiac arrest in his sleep.

Still, Liggett continued to call the Tour – albeit as part of the NBC’s coverage for the US market, one of few that didn’t take ASO’s international feed featuring the voices of Keenan and McEwen.

Shipp was anxious about the switch from British accents to Aussie ones a few years ago but the gamble paid off. After the initial shock, audiences warmed to the new sound of the race and ASO continues to use the services of the Australian commentators who also regularly call other races on the calendar for a range of other event organisers and broadcasters.

The pandemic has raised some hurdles but instead of barriers, Shipp sees opportunity. There is consideration being given to changing some fundamentals of the SBS coverage and the prospect of some new, younger voices being heard is strong.

“Our coverage will once again be helmed by Michael Tomalaris who brings a wealth of experience and cycling knowledge to SBS’s offering.” 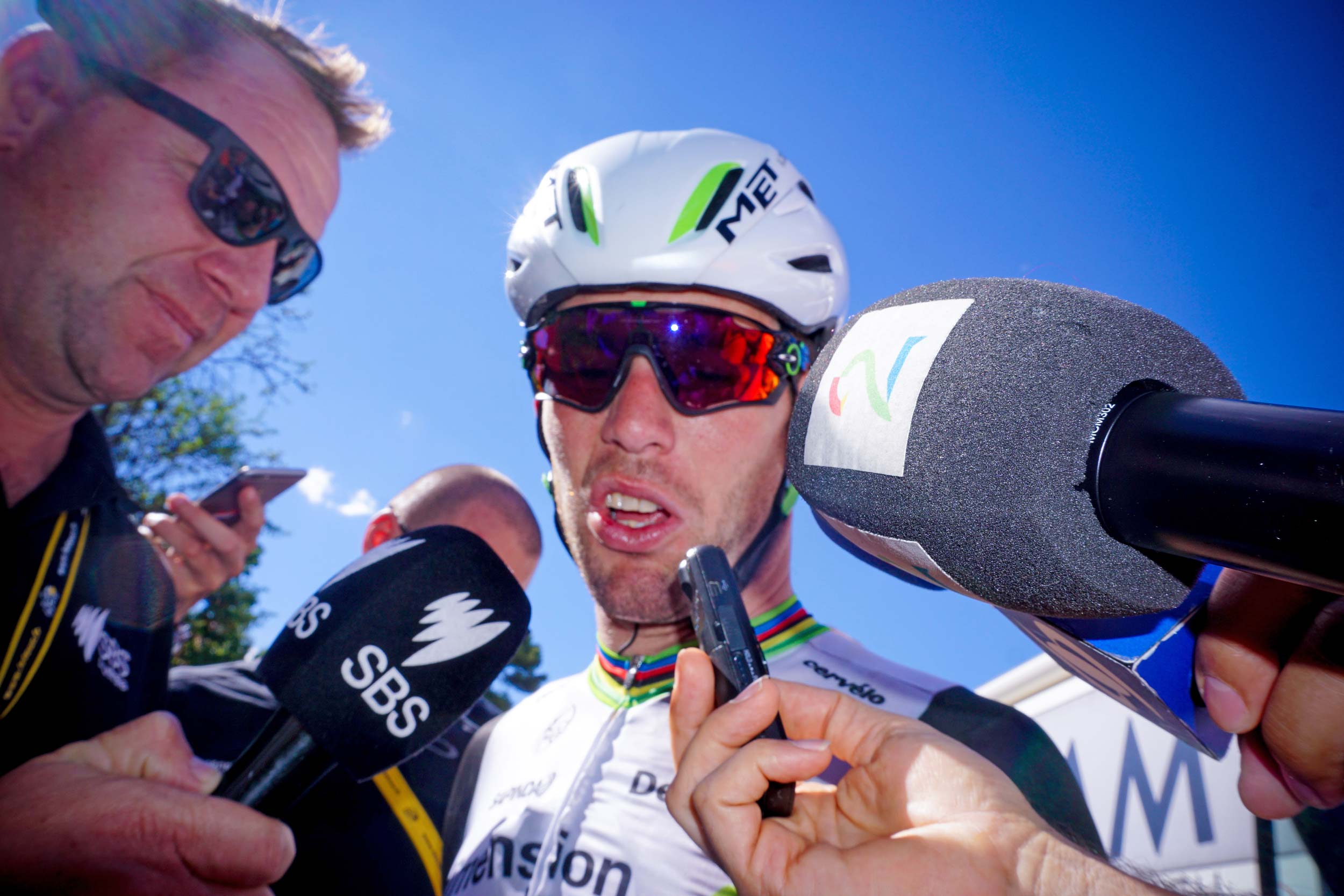 SBS has been pivotal in the growth of cycling in Australia; the network has helped introduce thousands to the beauty of bike racing, the Tour and many other events in our sport.

The only Australian champion of the Tour de France, Cadel Evans, still regularly cites SBS’s coverage of the race as his original inspiration to become a pro cyclist. And the 12 or so Aussie riders who are in contention to race the Tour in 2020 all grew up watching Liggett, Sherwen, Mike Tomalaris and others call the action.

There’s a reason why SBS is regarded as the “cycling network”; it has taken the sport to a new level in Australia and, according to Shipp, there hasn’t yet been any suggestion that the network’s revenue will be too heavily compromised by a delay to the start of the Tour de France.

For that to happen, of course, many additional measures need to be put in place to ensure the safe running of a sporting event in a year when there’s been minimal competition, and plenty of confusion.

“Hopefully the event will proceed,” concluded Shipp, “and we can once again enjoy the vision of an extraordinary sporting contest, one that evokes high emotion, good ratings – even late at night, or early in the morning – and a passionate following. Don’t we all want to see some good racing again?” 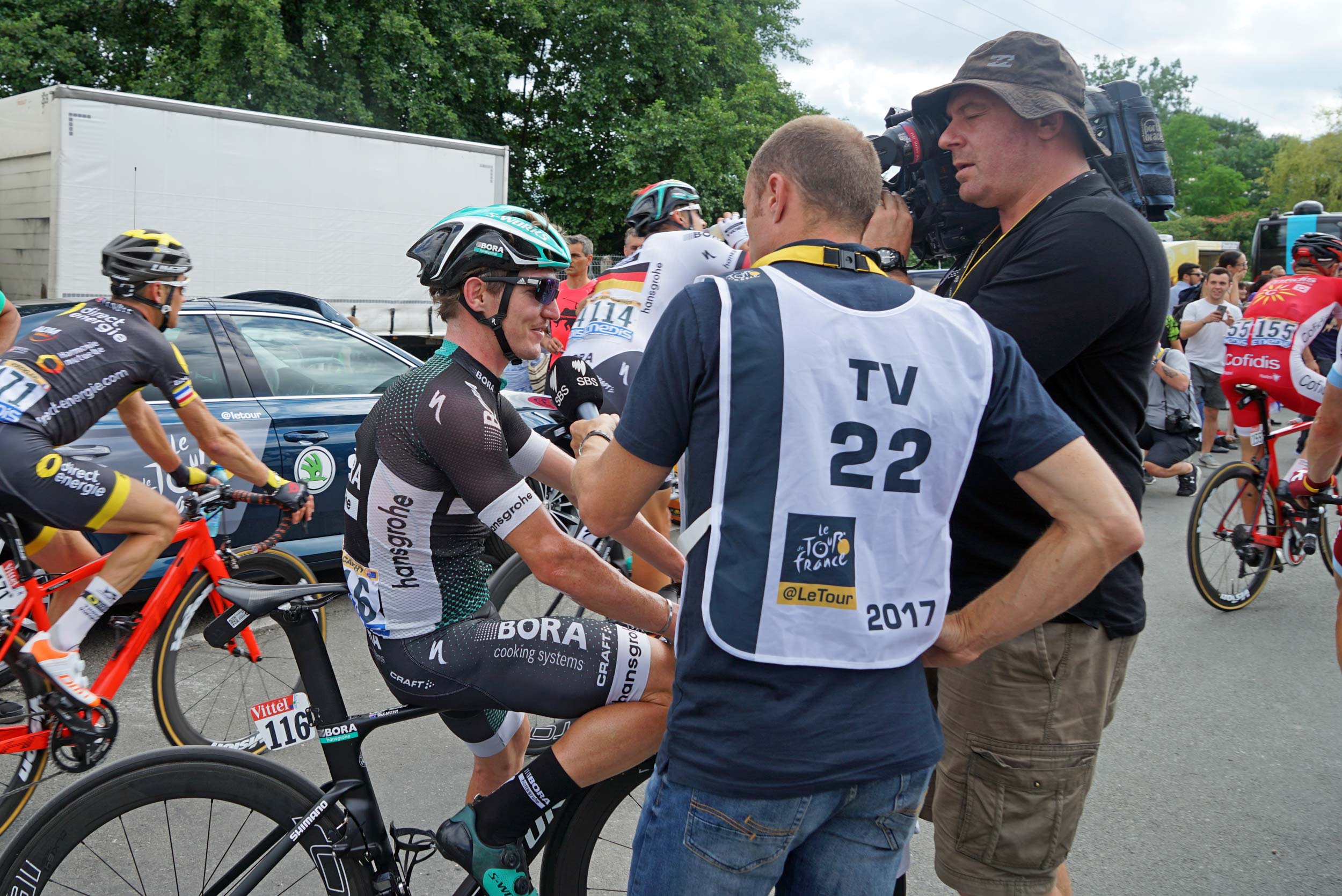 SBS has had a long tradition of reporting from the Tour de France but it remains to be seen who can be on the ground for the network should the race go ahead in 2020. (Photo: Rob Arnold)