WADA announced overnight that Russia would be banned from sports events for four years, including the Olympics in Tokyo. Shane Perkins switched nationalities, from Australian to Russian, in 2017 to give himself a chance to race in 2020… and he still expects to be on the velodrome for the sprint events.

RIDE Media: I’m talking with Shane Perkins the day after it was announced by the WADA that Russian athletes would be banned from the next Olympic Games. Given that Shane basically made the move to be a Russian athlete not that long ago, so that he could race in Tokyo, it’s worth having a chat with him to find out what the ramifications are.

Are you affected by this announcement overnight?

Shane Perkins: “Obviously it is concerning from the point of view that the team that I am part of – what I call ‘my team’ now – is effectively banned from the Olympics.

“But having come on board and having known a bit of the history – obviously with the Olympics and then the winter Olympics more recently, and what happened with that where the Russian team was banned…

“There is still the opportunity there in terms of going [to the Games in 2020] under a neutral flag for athletes that haven’t had a history of doping.

“There is an option there for those athletes to keep doing what they’re doing and not be affected by, essentially – in some ways – politics.

“There are a lot of athletes out there in the Russian team, like myself, that kind of inherited this thing with WADA and RUSADA that happened many years ago. It’s unfortunate for those athletes but it’s great to know that there are options moving forward for them to continue on their path, and continue their career, and continue pursuing their dreams.” 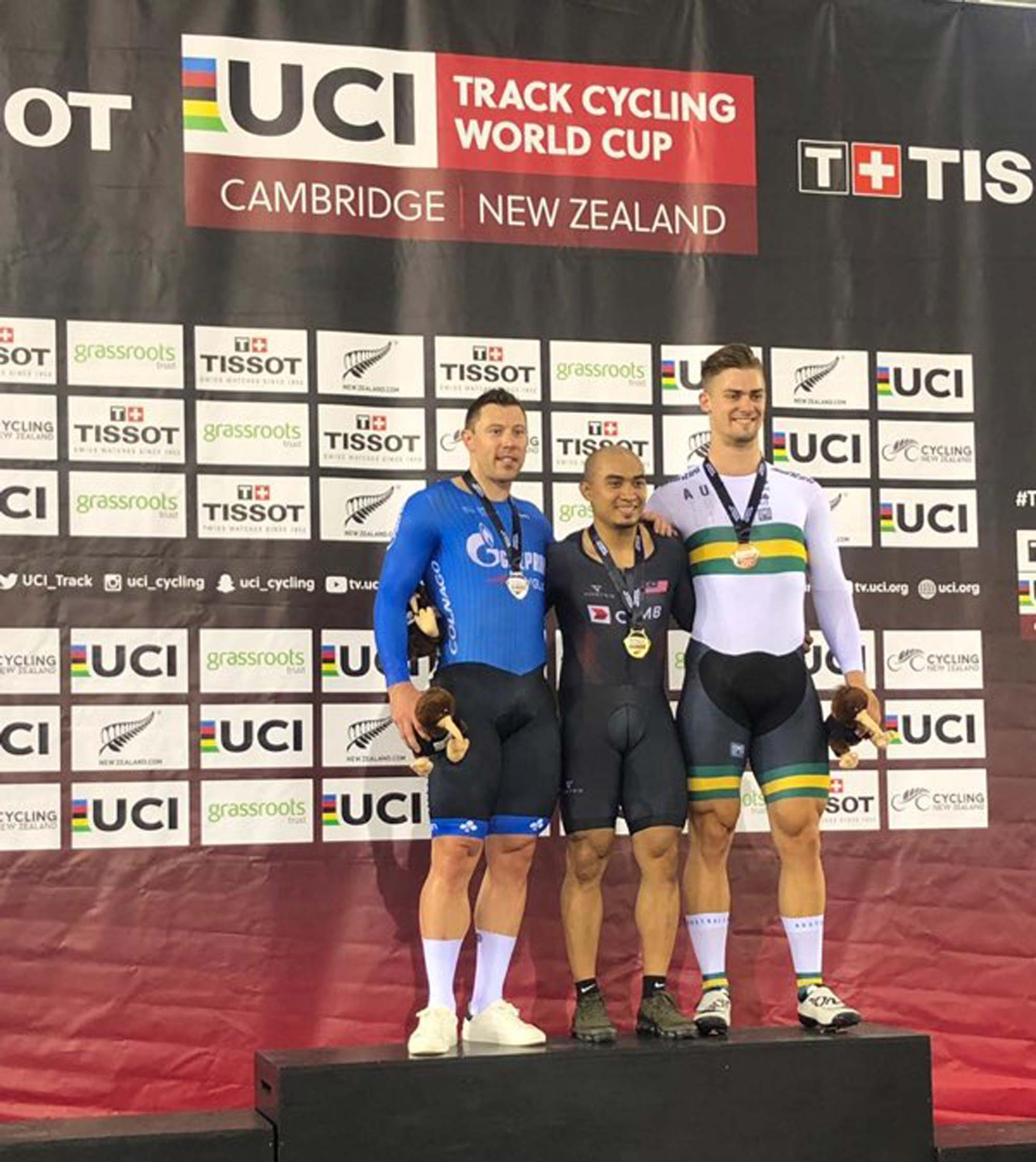 RIDE Media: The Olympics, by virtue of what it represents, has a dose of national pride associated with it… that is something that makes it interesting. Making the move to Russia (in 2017) was already a significant dent in that concept for you, a proud Australian. Do you feel like you’re possibly going to Tokyo as a ‘privateer’, is that the approach that you take towards Tokyo 2020 now?

Shane Perkins: “Everyone knows my history and how I rode for Australia [and] I’m now riding for Russia.

“And people would be silly if they didn’t think that I wasn’t out there riding for Australia and Russia at the same time.

“I’m proud of essentially being out there and making it to be in a position to ride the Olympic Games (again).

“But it’s also remembering that the Olympics are about – and I know this sounds a bit cliché – but there are so many unbelievable stories about the Games. If you take away the flags and you’re bringing in the best athletes from around the world to compete against each other, there’s something special in that.

“Also, more importantly, the journeys for each athlete to actually get to the Olympics, they’re some of the special things that you hear about.

“When I was in London [for the 2012 Games], for example, the athletes that you talk to are all different and they’re all special in their own ways.

“So, this happening right now is just one of those examples. It’s going to be another journey for me now and obviously I didn’t think it would come to this…

“It was a journey in itself, changing nations from Australia to Russia, but now it’s obviously taken a different turn. I’ll take that on.

“A lot of people would see that I’m still trying to continue my journey towards the Olympics, which is why I joined the Russian team; they gave me an opportunity and I’ll continue to search for ways to do that, because I want to get to Tokyo and fight for medals and actually be an example for people who, in everyday life – whether it’s sport or whatever – sometimes think that things are pretty hard, they’re pretty tough, and that maybe there’s no way through.

“But if you keep searching for a way and believe in yourself – again, it’s cliché – but it really is that simple: you keep pushing and maybe some doors will open up for you and things will come your way. That’s sort of the journey that I’m on at the moment. It’s quite a special one really.”

RIDE Media: What about you personally? Let’s say the team sprint formation that you’ve been working out with… you told me earlier you have an 18-year-old in that line-up, so he’s obviously not implicated. Is there anyone that you know, through your association with the Russian federation, who will not be able to go to Tokyo?

Shane Perkins: “In the team currently – and I’m talking about [track cycling] endurance and sprint – there’s no one that I know of that would be implicated.

“To be honest with you, I don’t know that much history that far back.

“As many people know, I’m relatively new in the Russian team anyhow. I haven’t spent that much time in Russia.

“I was living in Brisbane before when I made the switch of nationalities. Now I’ve moved to Perth, so most of my time is spent in Australia.

“I’m not saying that I’m naïve to anything; I just don’t know. It’s not something I can comment on because, as far as I know, of the team sprinters and the endurance guys there’s no one in there who has been implicated in any of that.

RIDE Media: Is it almost a relief Shane? Let’s say everything goes perfectly well and you’re standing on the dais and there’s no Russian flag rising up behind you, does that sort of feel a little bit more ‘normal’, for an Australian?

Shane Perkins: “Oh, I totally understand your comment and I think you know what I’m like; I’m a pretty loyal guy and I try to leave my ego out of a lot of things.

“The simple fact is that Russia has done so much for me to be able to continue my career. They’ve taken a risk taking me in and, yes, I’ve taken a risk joining the Russian team but they know my history.

“Everyone has an opinion, as we know, and I know who I am. I know my ethics. I love the sport. I want to fight for medals at the Olympics – that’s why I’m doing this.

“So, getting to the Olympics, winning a medal, and then not being able to essentially say to Russia, ‘Thank you for your support and for getting me there’ – because they are the ones that I need to acknowledge – it’s a bit of a kick in the guts for them.

“The thing is too, going under a neutral flag, people know the story. They know that I was part of the Australian team, that I’m not part of the Russian team, and when I’m racing around there without ‘Russia’ on my skinsuit or the flag raising at the medal ceremony, they’ll know.

“The other side of that too is that I’ll just be proud to stand there and be a symbol for the Olympics. That in itself is quite a huge achievement – albeit by not the best circumstances – representing, I guess, the Olympic Games. It’s a privilege, really, to be able to do that.”

RIDE Media: That’s the political story but you picked up a silver medal [in the keirin] on the weekend at the World Cup in Cambridge, New Zealand. You’ve got the Brisbane Track World Cup on the weekend, so you’re coming into good form. How are you feeling as Tokyo approaches?

Shane Perkins: “For me, actually, the main target – even from here – has always been the world championships (in Berlin, Germany from 26 February to 1 March 2020). My target for Cambridge and Brisbane was basically to gain enough points to qualify a keirin spot for the world championships, which is obviously important for Olympics qualifications.

“My form had been a bit rough early to midway through this year and then I found a bit more consistency with the move to Perth.

“Now my form is starting to come back.

“I’m not totally at my peak just yet. There’s more to come for the world championships but it was certainly great to pick up a medal in the keirin and finally be back on the podium once again in the World Cup scene. That’s been great for my confidence, knowing that that’s where I belong and that I’ve got it in myself.

“I’ll definitely build on that and the positive thing out of Cambridge, with the silver medal, is that it got me a lot of points towards the world championships and qualifying a spot.

“The important task in Brisbane is to sure up the last few points that I need to make sure I’ve got that spot [for Berlin] and then to have a really good standing start lap for the national team in the team sprint.”

RIDE Media: Just to round out this discussion, let’s talk about one of your Australian rivals. You beat Matthew Glaetzer, relegating him to the bronze medal position on the weekend. He’s gone through some trials of his own. Have you had some communication with him? He’s certainly got some amazing form considering his circumstances. Can you offer a couple of comments about him?

Shane Perkins: “Obviously, Matt is a phenomenal guy. I got the news [about his thyroid cancer] when I was in Glasgow and I contacted him straight away. To be honest, it shook me quite a bit.

“He’s a young guy, a super guy. He wouldn’t hurt a fly. And you just never know sometimes why or when something like that is going to come along.

“Things that affect our health can come on so quickly, but he’s handled it phenomenally well and I think that’s a credit to him and, obviously, the Cycling Australia staff around him for the support that they’ve given him. He’s very lucky to have them looking over him, picking up the cancer and getting onto it straight away.

“He’s done very well. From a mental standpoint, it’s a pretty huge knock – especially being that young – but having good people around him obviously helped him through.

“For him to bring the form that he had in Cambridge was great to see. He was still kicking some butt and I’m sure he’ll continue to do the same in Brisbane and he’ll just keep going from here.

“He’s had a scare but, in my view, that doesn’t mean that he needs to pull back or anything like that. He can continue doing what he loves doing.”