Shimano update (part 1): “We have massively upscaled our production capacity”

In part one of a series about Shimano in 2021, we consider the impact of the pandemic on the cycling market and ask how the component maker is dealing with unprecedented demand for its products.

The aesthetic of the world’s biggest bike race is set to change this June when blue Shimano cars replace the yellow ones that had fulfilled the role of ‘neutral spares’ in the Tour de France. For almost four decades, Mavic-branded cars provided mechanical support to the peloton but, earlier this week, it was announced that Shimano will take over the partnership with ASO.

This is about much more than a service agreement, it’s a sponsorship accord that promises to deliver considerable exposure for Shimano, arguably the world’s biggest cycling brand.

The deal, announced in a joint release by ASO and Shimano on Tuesday evening (Sydney time), extends the considerable commitment by Shimano to provide neutral mechanical services to cycling events globally. 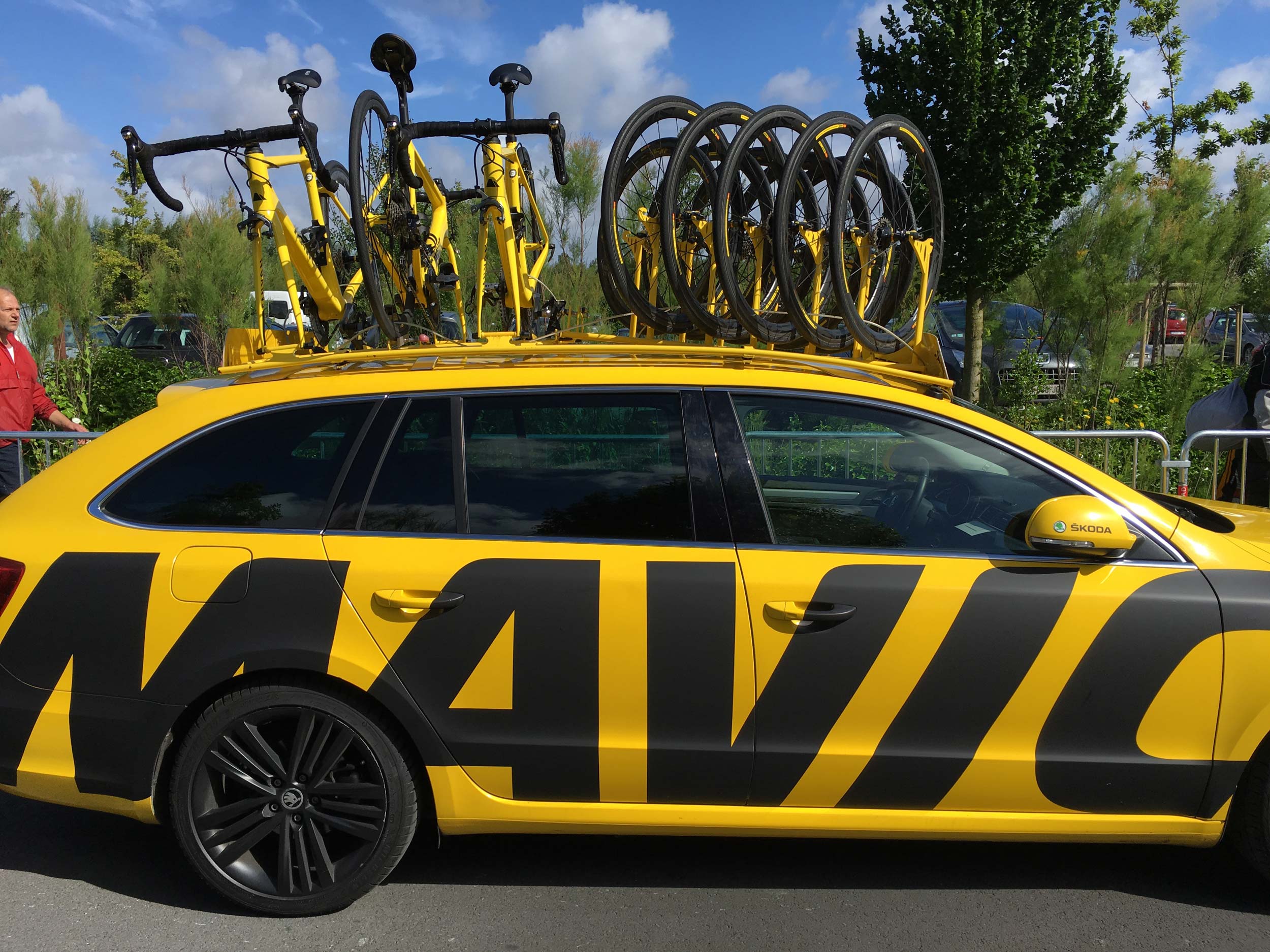 After many years of being an integral part of the Tour de France convoy, the yellow Mavic neutral spares car will not be part of the race any longer. From 2021, neutral spares at Le Tour – and many other ASO races – will be managed by Shimano. (Photo: Rob Arnold)

ASO’s CEO, Yann Le Moënner – a cycling enthusiast and regular rider himself – recognises the significance of the new arrangement, especially in the year in which Shimano celebrates its 100th anniversary as a company.

“The innovation and consistent level of excellence provided by the brand over its 100 years of existence make Shimano a crucial player in world and everyday cycling,” explains Le Moënner in the release. He concludes by saying how Shimano is “a brand that we are proud to be associated with”.

RIDE Media had a conference call with a trio of Shimano employees on Wednesday evening to find out more about the arrangement with ASO, and what it means for the company that has a long history of sponsorship and service provision with race organisers.

Shimano’s Sports Marketing & Events Manager, Myron Walraven, explained that the arrangement is about more than just brand building and exposure to a huge audience of cycling enthusiasts. It opens up a raft of new opportunities, including the chance to host VIP guests in what is effectively a front-row seat for events like the Tour de France. 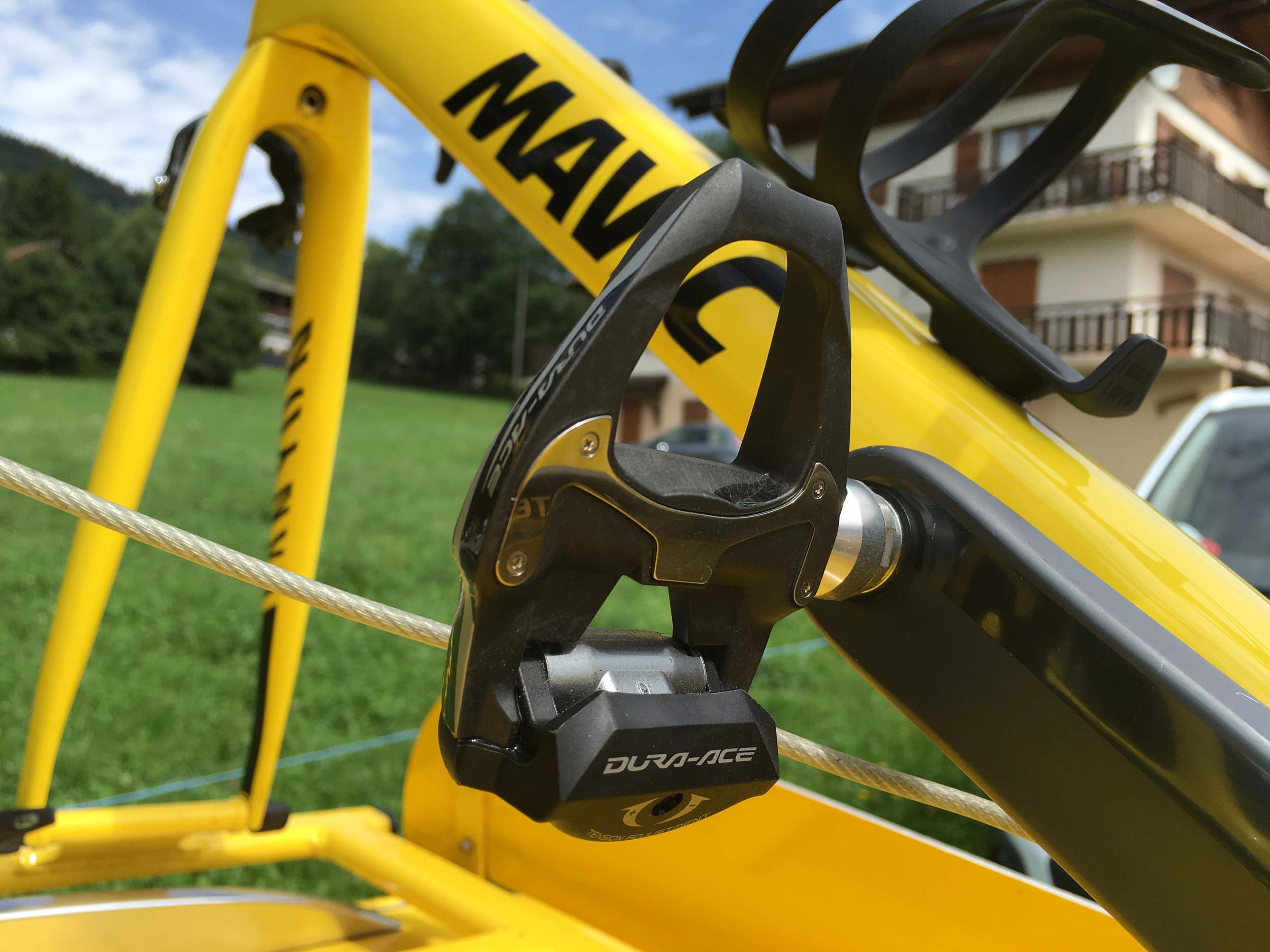 In part 2 of this series about Shimano and its new collaboration with ASO, Bert Roesems explains plans to manage the demands of the peloton. (Photo: Rob Arnold)

As with most things in 2021, there will be a need for additional planning for what ordinarily is already a considerable logistical undertaking.

Bert Roesems, Shimano’s Sports Marketing technical liaison officer, explained how “the neutral car guys follow the same rules – or restrictions – that the teams do… they operate from inside the bubble”.

(Note: In part two of this series, we’ll consider some of the requirements of the Shimano workforce and what jobs they will fulfil at Le Tour and myriad other races that come as part of the deal with ASO.) 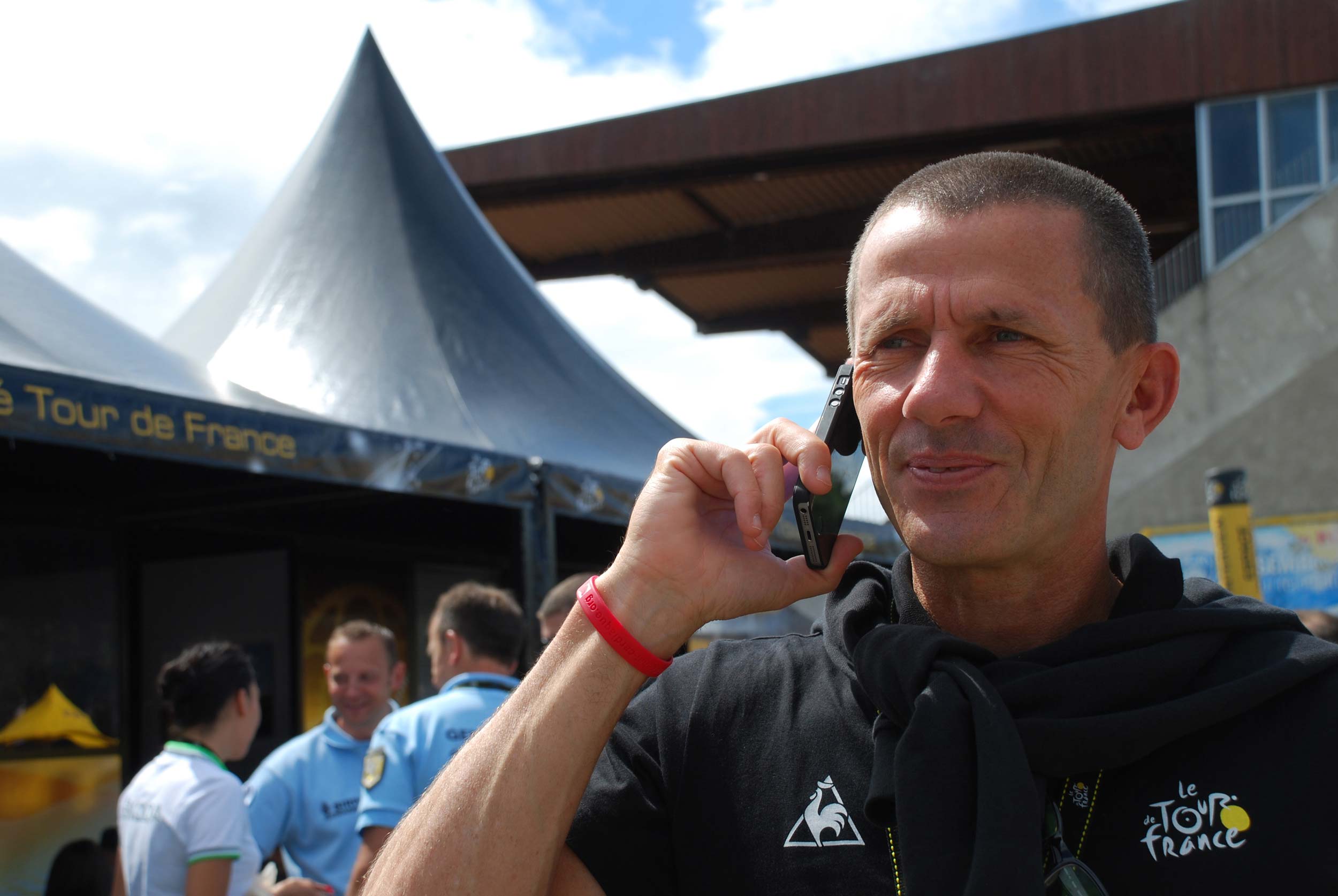 Yann Le Moënner, CEO of ASO, is looking forward to a new partnership with Shimano which begins with Paris-Nice in March. (Photo: Rob Arnold)

Promotion during a pandemic

The deal with ASO is big news not so much because there’s a different brand represented in the convoy of Le Tour (as Shimano has a long history already with the other Grand Tours, as well as over 20 years with UCI events). Rather, it’s significant because Shimano is spending big on promotion at a time when there are considerable production and supply issues.

This is something that cannot be ignored, especially as the cycling industry is riding an unprecedented high. Demand for components from Shimano has never been so strong as more and more people consider bike riding for their exercise and transport needs.

It is no secret, however, that supply chain issues have significantly impacted the ability for bike companies to fully exploit the interest in cycling that has emerged since the start of the pandemic.

Some companies are reporting delays of as much as 400 days for orders placed with Shimano. This severely impacts the entire cycling market.

During the interview, I raised this point and asked if Shimano has systems in place to reduce the lag in product supply.

When Shimano – which manufactures a huge percentage of cycling components used for all manner of riding, and all kinds of bikes – can’t fulfil orders, the entire industry suffers.

Ben Hillsdon, Shimano’s PR & Communication Specialist, recognises the concerns of the industry and suggests that the company is striving to minimise disruption to the market and ensure timely delivery of orders.

Still, is Shimano a little bit anxious about promoting its brand when it isn’t able to supply all of the product that is in demand? Yes.

Is there hope on the horizon? Apparently yes, at least that’s what Hillsdon believes.

“You are correct in saying we’re in a period of unprecedented growth for cycling which is very positive for the industry,” said Hillsdon.

“The growth has been very sudden as well.

“First of all, we had the period in March when bike shops were being closed and many brands were cancelling orders with us. Then, suddenly, [it was] a complete reversal of that. Bike shops were open, and suddenly they were booming, and bike brands were selling out of components very quickly.” 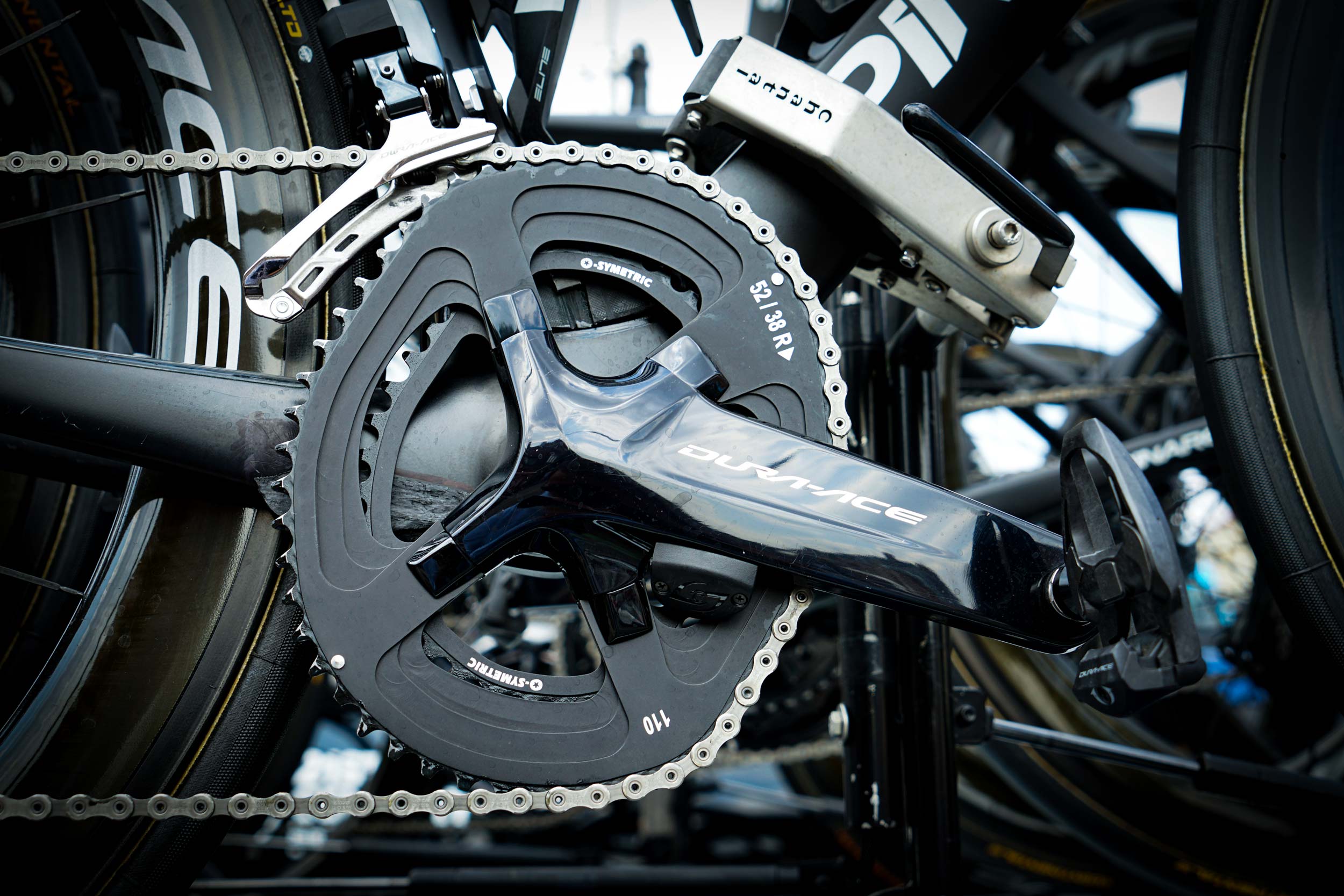 Shimano is a component maker, but the neutral spares role means its mechanics will need to manage equipment from all manufacturers.

Issues for OEM as well as retail

Exactly how long the lag is between order and delivery varies significantly depending on who you speak to. Some bike companies are complaining about waiting over a year for components.

Without the requisite parts, there are bikes being made that cannot be sold, but Hillsdon says Shimano has put systems in place to manage the unprecedented high demand.

“In the last quarter of 2020, we achieved record outputs for the company, and we expect that to continue into 2021 as well.

“We’re doing everything we can in the short term to increase production as much as possible.”

Of course, it’s difficult to know how long this halcyon time for cycling will last, or what further impact the pandemic will have on production capabilities, but there is a sense of confidence from the Shimano camp.

“We don’t quite know how demand will look as 2021 continues because, simply, it’s likely to be affected by COVID,” said Hillsdon.

There are myriad reasons for the growth of cycling while other sports are suffering, and Hillsdon says it’s possible that bike riding will become even more prevalent as “people are switching from team sports like football, to individual sports like cycling”.

Still, it’s hard to ride a new bike if you can’t buy a new bike – or, at least, one with components by a brand that will soon be heavily promoted in the world’s biggest bike race (and a range of other events in the ASO portfolio).

Paris-Nice, which is due to begin on 7 March, is scheduled to be Shimano’s first dalliance with a French ASO race.

“We don’t know quite how it will continue,” said Hillsdon about the prosperous times for the bike trade, “but we are very confident for the future. With that comes the need to supply not only retailers but bike brands as well.

“We are encouraging our customers to place orders as soon as possible so we can anticipate that demand and look at our long-term strategic planning.

“Consumers,” he says, “should be confident that they can get hold of bikes – or spare parts for their bikes – in stores.”

Automation is an advantage during a pandemic

Ben Hillsdon didn’t shy away from the supply chain question and he acknowledged that it was indeed relevant. There is genuine concern that the lag in delivery will continue to impact a market that is thriving… while, simultaneously, being hamstrung.

Factories have increased production but, as we know, that could potentially topple with the slightest cough. So, I wondered, is the Shimano workforce still capable of doing what needs to be done to create the products that are in such high demand? Shimano products are manufactured all over the world but has COVID forced workers to stay at home rather than be in the factory doing their job?

“That’s a good question,” replied Hillsdon before admitting that he doesn’t have the precise answer, as things can change overnight with COVID.

“I’m not completely up to date on the rules and regulations on COVID in various countries around the world but as far as I know, our factories are running at full capacity, completely full capacity. So, that suggests to me that all factories, all production centres, are operating with a full workforce.

“Many of our factories have a lot of automation in their systems, especially in Japan; it’s super high-tech and they don’t require too much human labour, I suppose – manual labour.

“There’s a lot of automation and people can keep their required distance from each other in their work environment.

“But the short answer is: factories are open and running at a very, very high capacity.”