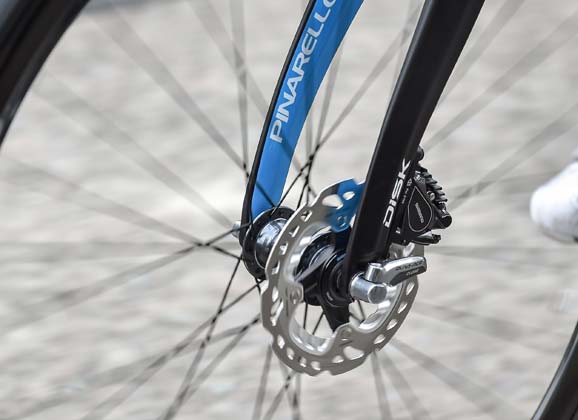 The start of a new way of stopping has hit the pro peloton: disc brakes have arrived. In April the UCI announced a two month trial period for professional teams and this week two teams have debut two different stopping mechanisms in the Eneco Tour. Team Roompot was the first to use the SRAM system and, overnight in stage three, we have seen Team Sky’s Bernhard Eisel racing on a Pinarello with Shimano’s road-specific disc brakes.

To find out a little bit more about what Shimano hopes will be a revolution in stopping, RIDE caught up with one of the brand’s Australian representatives and asked him a little bit about the system used by Eisel. (Read the transcript of the exchange with Mitch Ho below.) 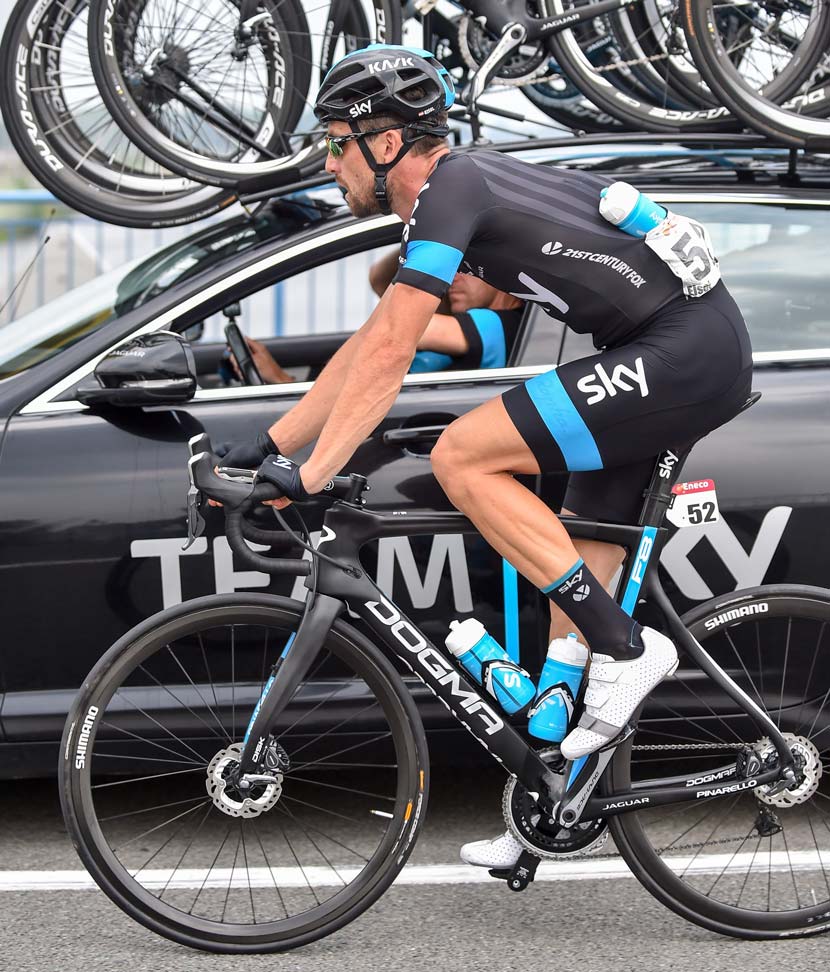 Bernhard Eisel is the first rider to use the Shimano disc brake system in the pro peloton.
Photo: Graham Watson

RIDE: I’m in the office with Mitch Ho from Shimano [Australia] who has come to drop off some products just as we see the images from stage three of the Eneco Tour [overnight, Australian time] where Bernhard Eisel is one of the riders using disc brakes in the peloton. It’s the first WorldTour team to ride disc brakes in a race. Can you just give us a little bit of background of what the units are and how aggressive Shimano has been in making sure that they’ve been ready in time for this two month trial?

Mitch Ho: “They’re using what looks like the new RS805, which is a new standard of disc brake mounting; it’s a flat-mount caliper which will be released later on this year. It’s a model year 2016 product.

“IceTech comes from our mountain bike technology, it’s for dissipating heat particularly on long descents and he’s coupled that with IceTech pads which, again dissipate heat so there’s consistent [no loss of] braking performance throughout the course of the ride.” 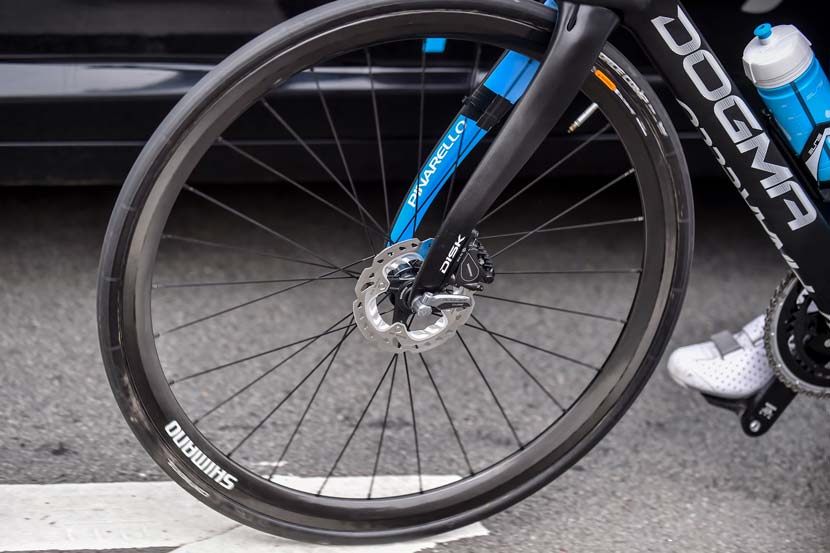 The Shimano RS805 system is a flat-mount caliper with a 140mm rotor.
Photo: Graham Watson

We know this has been in the makings for a little while. Are you surprised that it’s been adopted? This is probably the second or third race that they’ve had the opportunity to do it… did you know from Shimano headquarters that there were teams that were going to be riding it so early in the experimental phase?

“We’d heard that it would be happening but personally I didn’t think it would have happened this soon. It’s good to see that they’re embracing that technology and that it’s starting to find its way into the peloton.”

How important is it for Shimano to have it on the race scene? We’ve seen that consumers have had access to these products for a couple of months… maybe even a year now.

“Yeah, it’s usually the reverse case where the race teams get it and then it trickles down to the consumer. But the consumer has had access to road disc brakes for well over a year – it’s been almost two years since we introduced it…”

[What Eisel is using] is the ‘flat-mount’ configuration. How different is that to the original [road] disc options?

“The original disc mounts were pretty much based on the mountain bike post-mount caliper mounting. These [the RS805] are a bit more streamlined, [offering] a bit more easy access and, with that of course, comes new designs in frame and fork as well.” 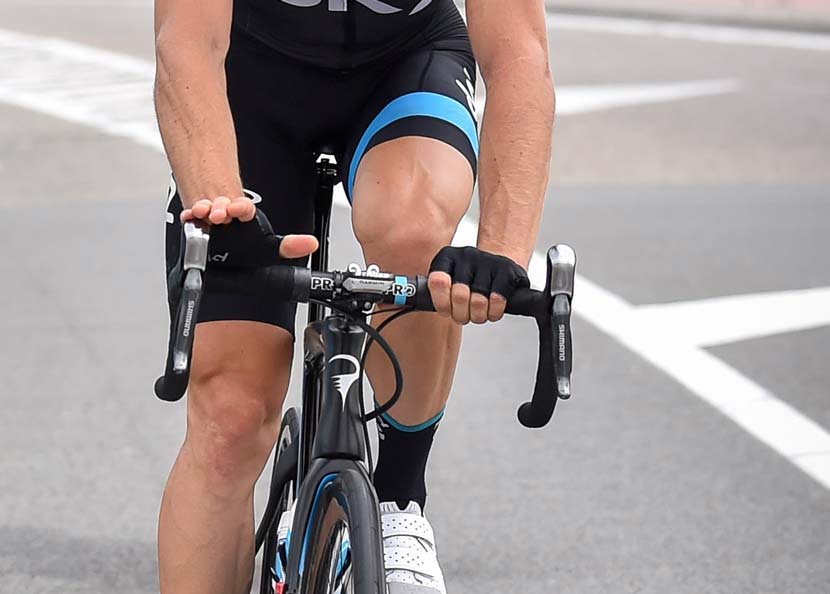 Professional use has come almost two years after the disc brakes were released on the market by Shimano.
Photo: Graham Watson

So has Shimano been working with Pinarello, for example, to get the requisite carbon lay-up so that there’s not a potentially catastrophic fail with the fork?

“Yeah, for sure. They’ve been working with a lot of manufacturers to get it right and Shimano has tested and developed this new standard over time.”

You know the product well by now, can you talk a little bit about the weight differences between traditional caliper brakes and what we see Eisel using in Eneco?

“The disc brakes are no surprise, it has come from mountain bike technology where they used rim brakes for a long time and then, eventually, probably 15, 16 or 17 yeas ago made the switch over to disc brakes.

“With more demanding courses – for both road and mountain bike races – it’s important to have more of a modulation window before the wheel actually locks up.

“I don’t think locking up is where you want to be; you want to have that long period of modulation – the opportunity to slow down before you lock up…”

But the weight difference? Are they on par or just a little bit heavier than the traditional cable/caliper arrangement? We’re talking about hydraulic fluid, different arrangements with the axle… what’s the difference of Di2 standard versus [the disc brakes]? Do you know the grams?

“Not exactly but it’s a little bit heavier than the traditional rim brake set-up but the new flat-mount design eliminates a lot more material and the actual mounting hardware is a bit less – it’s a bit more streamlined, more integrated into the frame and fork so there’s less need for extra hardware compare to standard mountain bike disc brakes.

“The same with the rotors, they’ve got them down to a 140mm [configuration] – as light as possible.

“It’s a little bit heavier but the way bikes are going now, they’re that light already…”

We see rim technology now will change because you don’t have to have the same brake surface. Has Shimano already shaved weight off their rims for the disc-specific wheels?

“Yeah definitely. Like you said, we don’t have to put in a braking surface [like we did before] so it allows us to go for a full carbon rim without actually having an extra allowance for the wall in the braking surface.”

Well, thanks. We’ll see what happens from here. 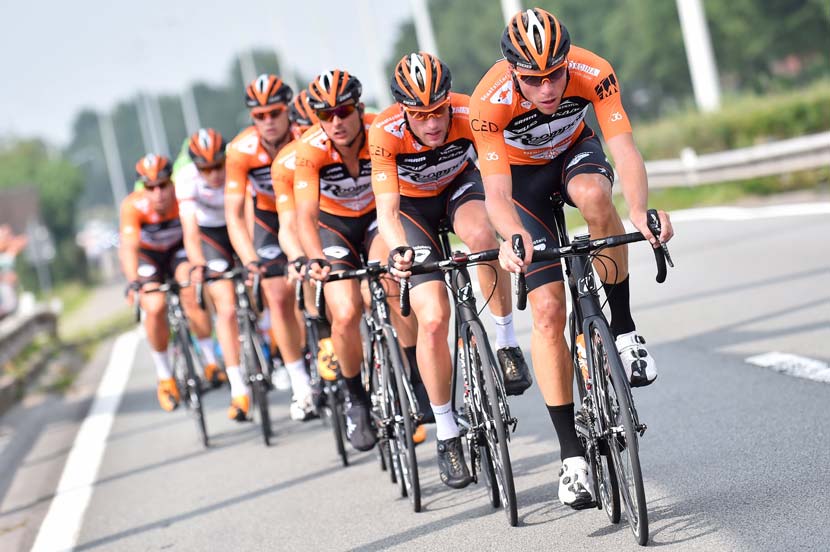 Team Roompot was the first to use SRAM’s disc brake system in the pro peloton…
Photo: Graham Watson 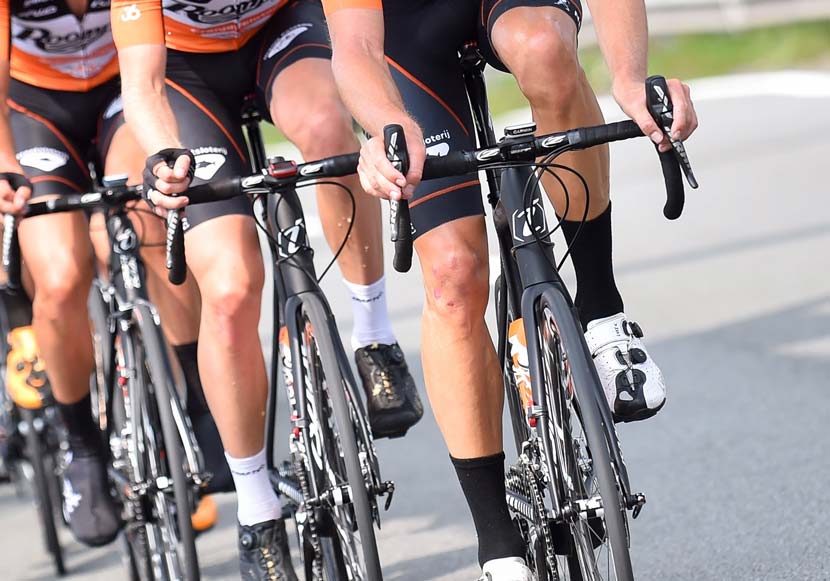 The fork crown without a caliper… the pro peloton welcomes a new way of stopping.
Photo: Graham Watson