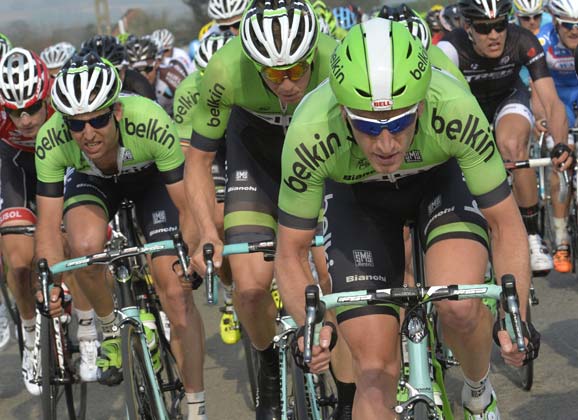 The news that Belkin may return to being Blanco, is a prompter to consider some cycling team history and recount the story of the Zero Boys venture from 26 years ago. With an eclectic mix of riders, no parent company, a big, ugly multi-coloured “0” on a white jersey, this team was able to infiltrate the peloton in 1988. And although the team didn’t contest a Grand Tour during its only season it did manage to wangle a start in some of the biggest Classics. 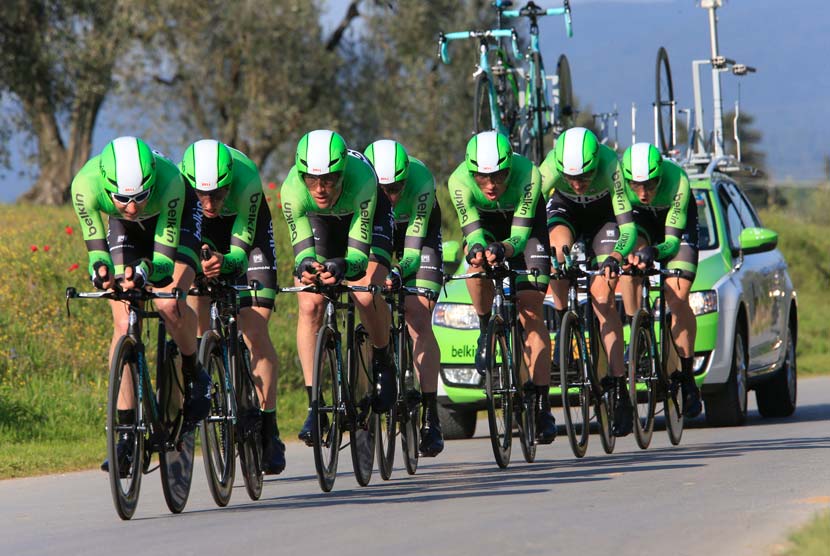 Belkin in the TTT of Tirreno-Adriatico earlier this year…
Photo: Graham Watson

We’ve seen numerous teams in recent years emerge with the title of a holding company on their jersey and a hope that it can be joined – or replaced – but that of a title sponsor. The Belkin team was known as ‘Blanco’ for six months and it was that way 25 years after ‘Zero’ was part of the peloton. Here’s a little history on the plight of pro racing in 1988.

It all began with a desire to race. That was the catalyst for ‘The Zero Boys’, a group of 13 riders who teamed up in 1988 to see if they could make a dent on the professional cycling scene. They came from five countries – the Netherlands, Belgium, USA, Great Britain and Australia – and represented no sponsor. That was the reason for the “0” in the title: they began with little and hoped to make something of the season.

The Blanco story has similarities but there was a big distinction between the two blank teams separated by 25 years. The Zero Boys project was a team with what was effectively a blank jersey in the peloton.

According to Belkin’s new general manager, the former PR manager for the Dutch team Richard Plugge, the Blanco holding title was “the relaunch of the previous Rabobank Cycling Team.” The official release issued on 13 December 2012 explained the hopes of the squad after 17 years of title sponsorship from Rabobank. “The team will be given the possibility to be relaunched thanks to the bank. The team will start as a new team, with a fresh start and on a blank page. The Blanco Pro Cycling Team aspires to compete at the highest level, and in a credible and honest way. The team’s focus will remain on the development and support of cycling talent.” Riders from six nations were on the roster at the time that Blanco became Belkin: 18 Dutchmen, four Australians, two Belgians, two Germans, two Spaniards and a Norwegian. But this was very much a Dutch team. And it is promised a placed in the WorldTour for at least two seasons (2013 and 2014).

The Zero Boys had no such certainty.

The team from 1988 was also registered in Holland and had Dutch management but that’s about where the similarities end. It was built on a shoe-string budget and the concept, while clever – and created in accordance with new regulations introduced by the UCI while Hein Verbruggen was the president – wasn’t self-sustaining. It lasted one season.

Blanco is far from the first generic title to be used in cycling. And there are several recent examples that have worked so well that they are now backed by major international companies and multi-million dollar budgets annually. Of the 19 WorldTour teams for the 2013 season, seven began as outfits with a desire to race but not actual company as the headline sponsor.

Astana is the capital of Kazakhstan but it’s now recognised as a name of a cycling team.

GreenEdge was a title dreamed up by Shayne Bannan and Gerry Ryan and it’s how the first Australian team in cycling’s top league began life. Now it’s known as Orica-GreenEdge.

Euskadi is the Basque region of Spain and it’s the second part of a hyphenated name (that begins with Euskaltel, a telco from the region). The team received funding from the telecommunications company but its heritage was as a public-funded model much like what Susan Stewart had hoped to achieve with iTeamNova in 2002.

Garmin-Sharp made its entry into the top-tier in 2008 dubbed Slipstream and the GPS company made its debut as title sponsor in the Tour de France that year.

RadioShack-Nissan – which has become Trek Factory Racing for 2014 – began life as Team Leopard in 2011.

And, of course, Katusha – the number-two team in the world rankings in 2012 – is a name that doesn’t actually relate to anything other than “Russian global cycling project”.

For four seasons (from 2008 to 2011) there was also the Highroad, the team formerly known as T-Mobile until doping scandals killed off that significant investment in the sport by the telco.

Bob Rasenberg was part of the Zero Boys team and he recently told RIDE his version of how it all came together for the Zero Boys. “It was a long time ago,” said the Dutchman. “I was 23 and had turned pro the year before, in July, for SEFB, the Belgian based team managed by Ferdinand Bracke. I got some good results in my first races and then dealt with some sinus problems for a big part of the season. During our winter season I was better and wanted to do some track carnivals in Tasmania. The team didn’t like me going there and sacked me for not turning up at a French team-mate’s wedding (a team-mate I didn’t even know) and declared that I’d refused work.

“When I returned to Holland from Australia I was quite desperate for a team. It looked like I was going to sign up for Histor-Sigma, but the season was already starting and I still hadn’t signed. Along came Zero.

“I still think the idea for the team was brilliant, but it was never run as it should have been. According to what were recently introduced UCI rules, a team needed to have the main sponsor (or team name) most prominently on the shirt. In our case it was a huge zero all over the shirt. Cosponsors were, from then on, allowed to change during the season. So a big team could have a French co-sponsor during the Tour de France and an Italian co-sponsor during the Giro d’Italia. Ultimately Zero could have a local co-sponsor for each and every race we started.

“A lot of companies would find sponsoring a team for a full season just too expensive, but if they could just have a pro team in their local race, that would be a different story. As we proved with the Zero Boys, it was possible to get a start in a lot of the major races, and so this could be very interesting for a lot of potential sponsors and for us.

“We started in the Amstel Gold Race, Liège-Bastogne-Liège, Gent-Wevelgem and lots of other Classics.

“I can’t even recall all the races, as I returned to the amateurs in May 1988. I signed a contract with Zero in February 1988 for quite normal wages and by mid-May hadn’t received one Dutch guilder (our currency at the time).

“Neil Stephens was one of the better riders in our team, he actually got a lot of live European TV coverage during Liège-Bastogne-Liège and the Amstel Gold Race.” 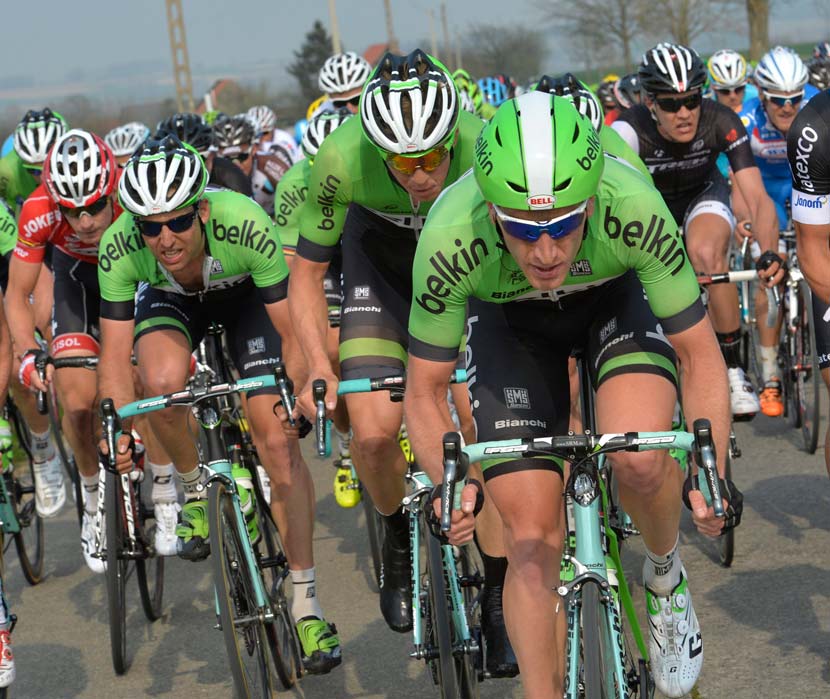 Belkin in the Classics… a year after racing as ‘Blanco’.
Photo: Graham Watson