We return to ‘Renshaw’s Pedal Project’, a bike shop in Bathurst, for another series of interviews with Mark Renshaw. The fifth ‘Story Of My Bike, Pro Series’ is about the Giant TCR he raced the Tour de France on in 2012 while with the Rabobank team.

– Watch Mark Renshaw explain his memories of his Giant TCR of 2012, click the link below. –

There is an impressive collection of bikes hanging from the ceiling at Renshaw’s Pedal Project. And it takes little prompting for the shop owner, Mark Renshaw, to explain the memories that come flooding back when he takes a moment to look at what he used to race on.

Last week, RIDE Media visited Bathurst for a second time in a month. After a 200km drive from Sydney, it was time to pull out the ladder and a 7mm spanner and unhook a few more bikes and get Mark talking.

The fifth instalment of the ‘Story Of My Bike, Pro Series’ is the lightest bike Mark raced during his 18-year pro cycling career. As you see it here – ie. ready to race with everything but ‘dossard’, cycle computer / power meter, pedals, bidons (and air in the front tyre) – the Giant TCR Rabobank team-issue of 2012 weighs in at 6.71kg. 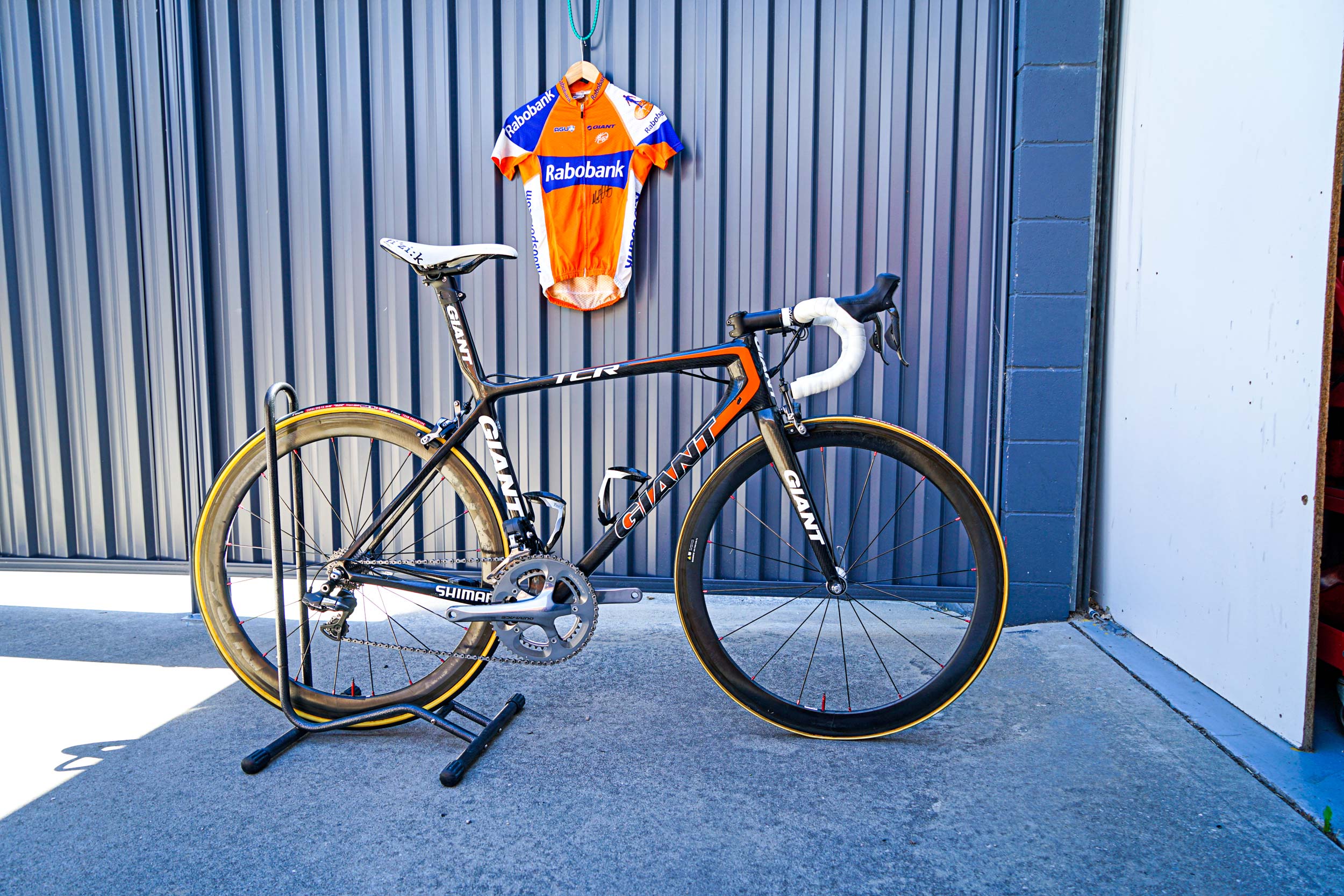 Other than allocating some time to sit in front of the camera and speak about the bike, very little planning went into these interviews. And the more you look at bikes from the past like this, the more questions spring to mind. Why, for example, did Rabobank match old Dura-Ace cranks to the early-generation Shimano Di2 groupset? (Regretfully, I didn’t ask that question on Friday… but I’m returning to Bathurst again next weekend for the Bathurst Cycling Classic, so I’ll chase up Mark for answer in a few days.)

Why is the front tyre deflated? That’s an easier question: there was a small leak in the tubular Vittoria tyres and although Mark tried a makeshift repair using some sealant a few minutes before jumping in front of the camera, it didn’t do the job. And so, we pumped up the rear and shot the bike with a flat front tyre. 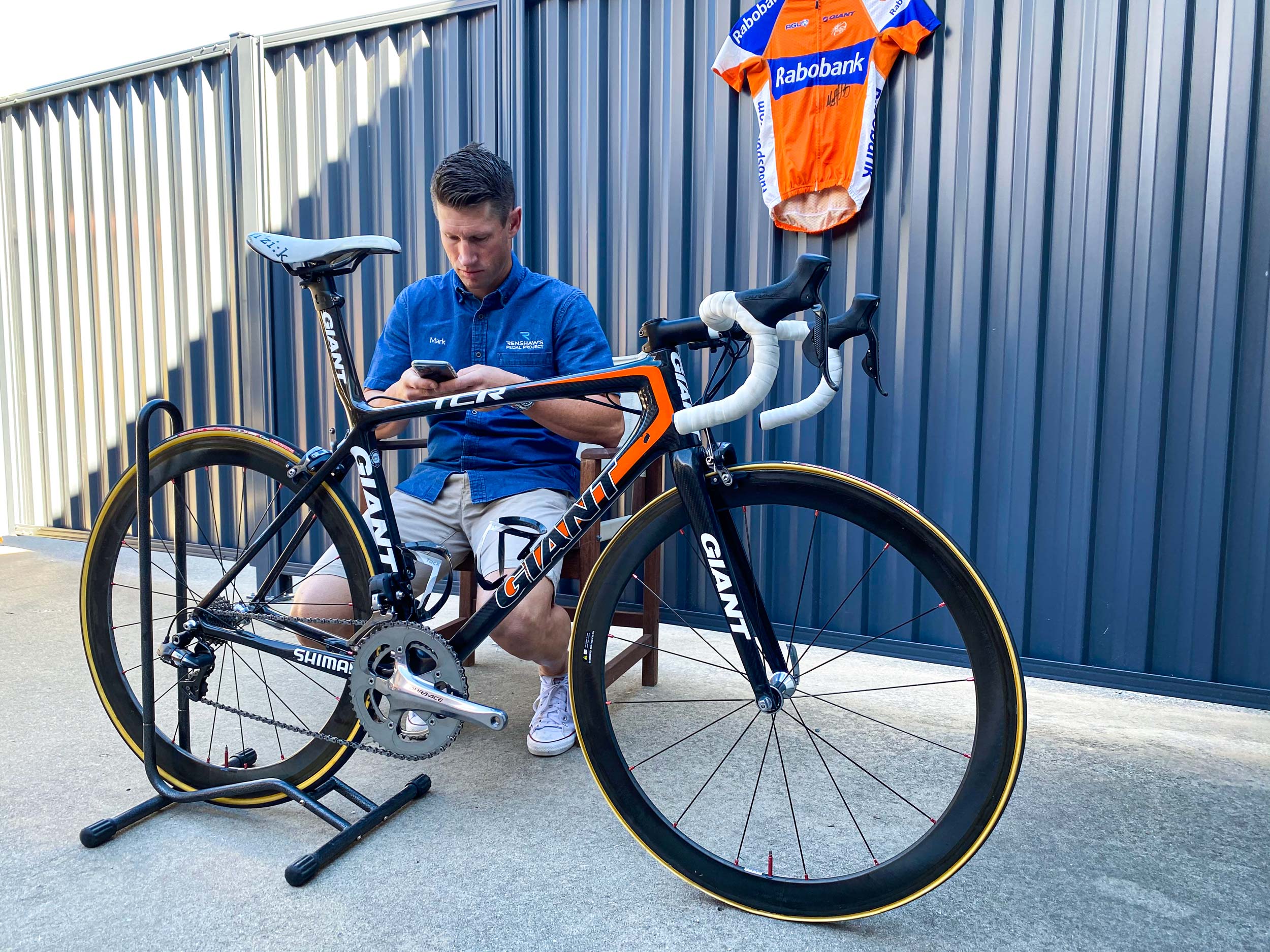 After almost two decades of racing around the world, the memories quickly add up. So too does the bike collection and the pile of team and prize jerseys.

In Renshaw’s shop you’ll see an impressive display of cycling memorabilia, including umpteen signed jerseys; some are his, some are from team-mates (past and present), and some are from riders he looked up to as an impressionable young man.

Mark Renshaw remains a true cycling fan. He still follows the sport a couple of years after retiring from racing, and he continues to stay involved with the pro scene even if he cannot travel as much as he would like to now that the season is in full swing again. Instead, he does his race commentary from afar and continues to liaise with a long list of sponsors who he worked with over the years.

Before each interview about his bike collection, he would quickly check to ensure he had remembered the correct year of the bike that was sitting in front of him, begging to be talked about.

The Giant TCR prompted a glowing smile and even a few declarations. “That was one of my all-time favourite bikes,” he said about the black-and-orange framed bike, one he probably only raced in the Tour de France that year.

At the start of the 2012 season, Rabobank team bikes were white and orange but a limited release of lighter frames was issued to riders just before the Tour that year. With only a thin layer of clear coat lacquer over the carbon-fibre, Giant presented another round of TCR frames for the team’s TDF selection. 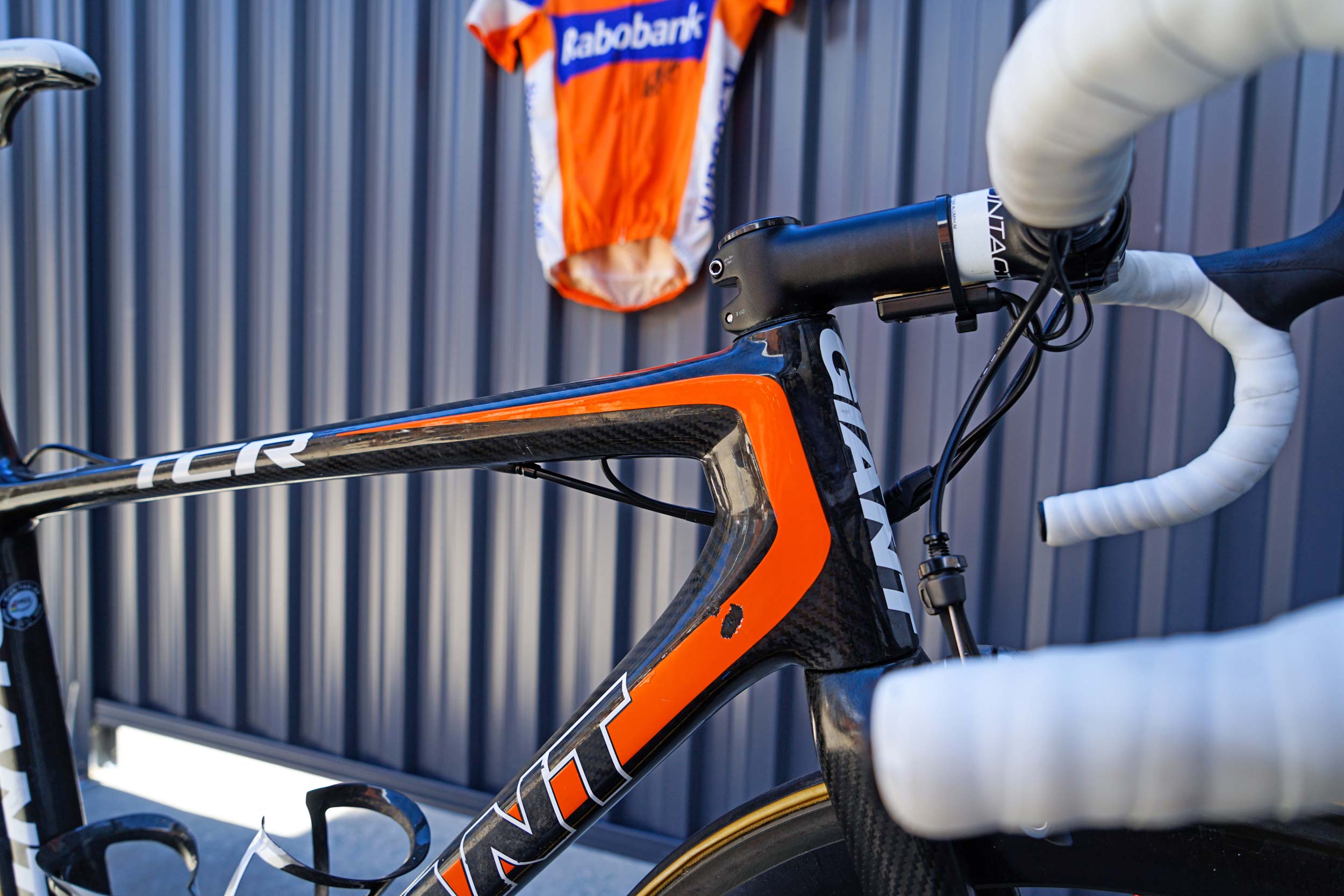 It was a light bike and it is also still particularly popular amongst those who follow RIDE Media (and our #BikeGalleryByRIDE on Instagram): Giant clearly has a huge fanbase because each time a TCR or Propel features in our feed, the reaction is significant and many memories are shared.

TCR stands for ‘Total Compact Road’, a concept that started in 1997 and made its debut in the pro peloton in 1998. It was Giant that essentially pioneered a design trend that moved away from traditional frame shapes and into a whole new realm in the late-1990s.

With Mike Burrows leading the design team, the early generation TCR frames were available in a limited run of sizes with adjustments made largely with different stem and seatpost lengths. That idea didn’t last long but the TCR remains in the Giant catalogue in 2021… albeit with an entirely different aesthetic. 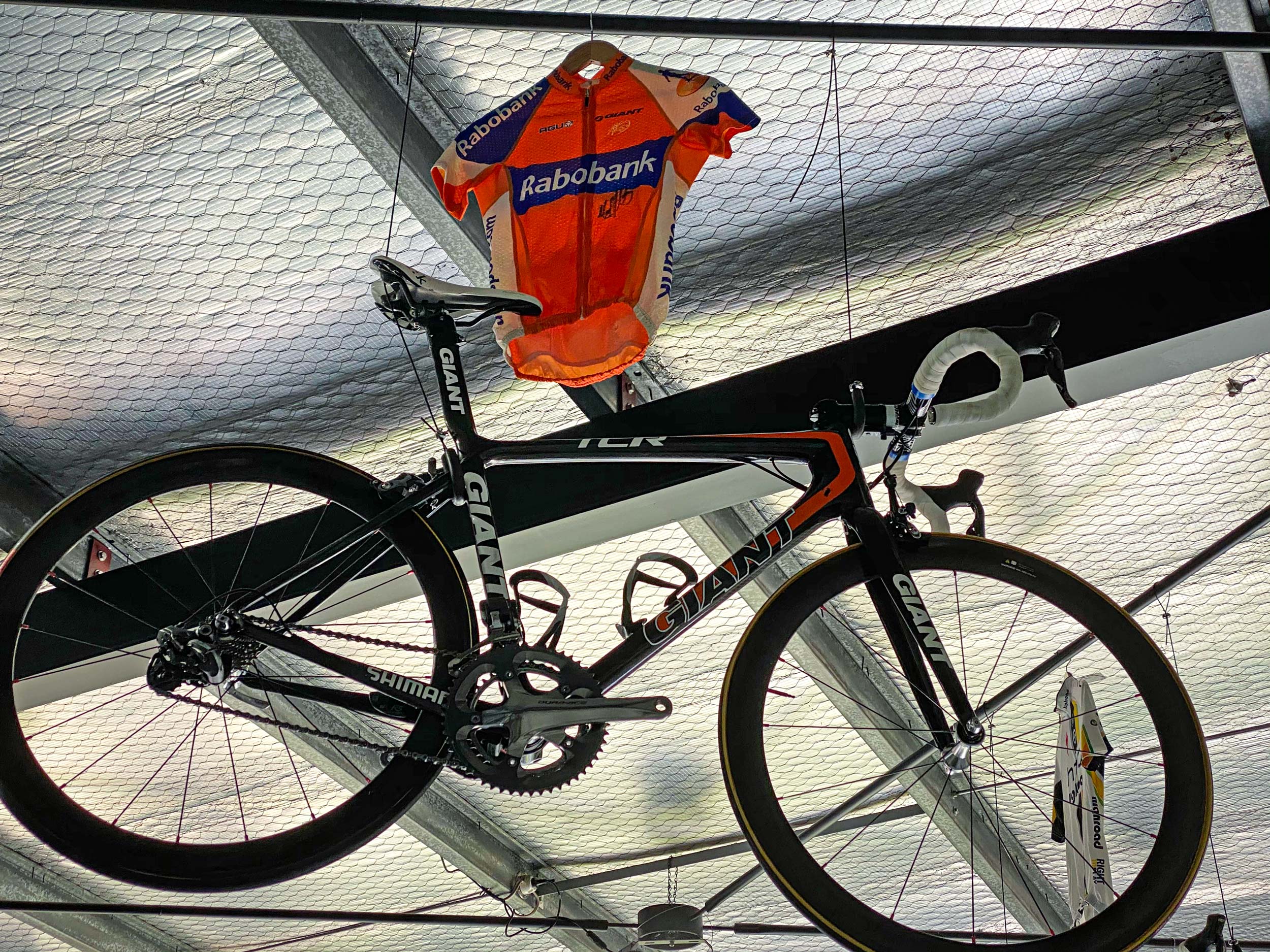 Renshaw’s first memory of this particular bike was one of carnage: he was near the front of the peloton towards the end of stage six of the 2012 Tour de France when all hell broke loose. Alessandro Petacchi, a sprinter from a rival team at the time, removed his knee warmers and attempted to pass them to a team-mate. It was a manoeuvre that didn’t end well.

Renshaw remembers it as “one of the biggest crashes in the history of the Tour de France”, one that involved eight of the nine Rabobank riders in the race.

He’d limp on injured for a few more days but eventually abandoned that Tour because of the injuries he sustained. This is what he explained he first started talking about the bike… but more anecdotes come to mind as he sits in front of the camera looking back at the TCR from nine years ago.

Click the link to the YouTube clip and enjoy a trip down memory lane with Mark Renshaw and another episode of the #StoryOfMyBike series.