Story of my ride: Rediscovering Graubünden in Switzerland, by Alain Rumpf

To introduce a new series of articles about great places to ride, Alain Rumpf* shares some of his favourite routes in the Alps and beyond on his website Switchback. 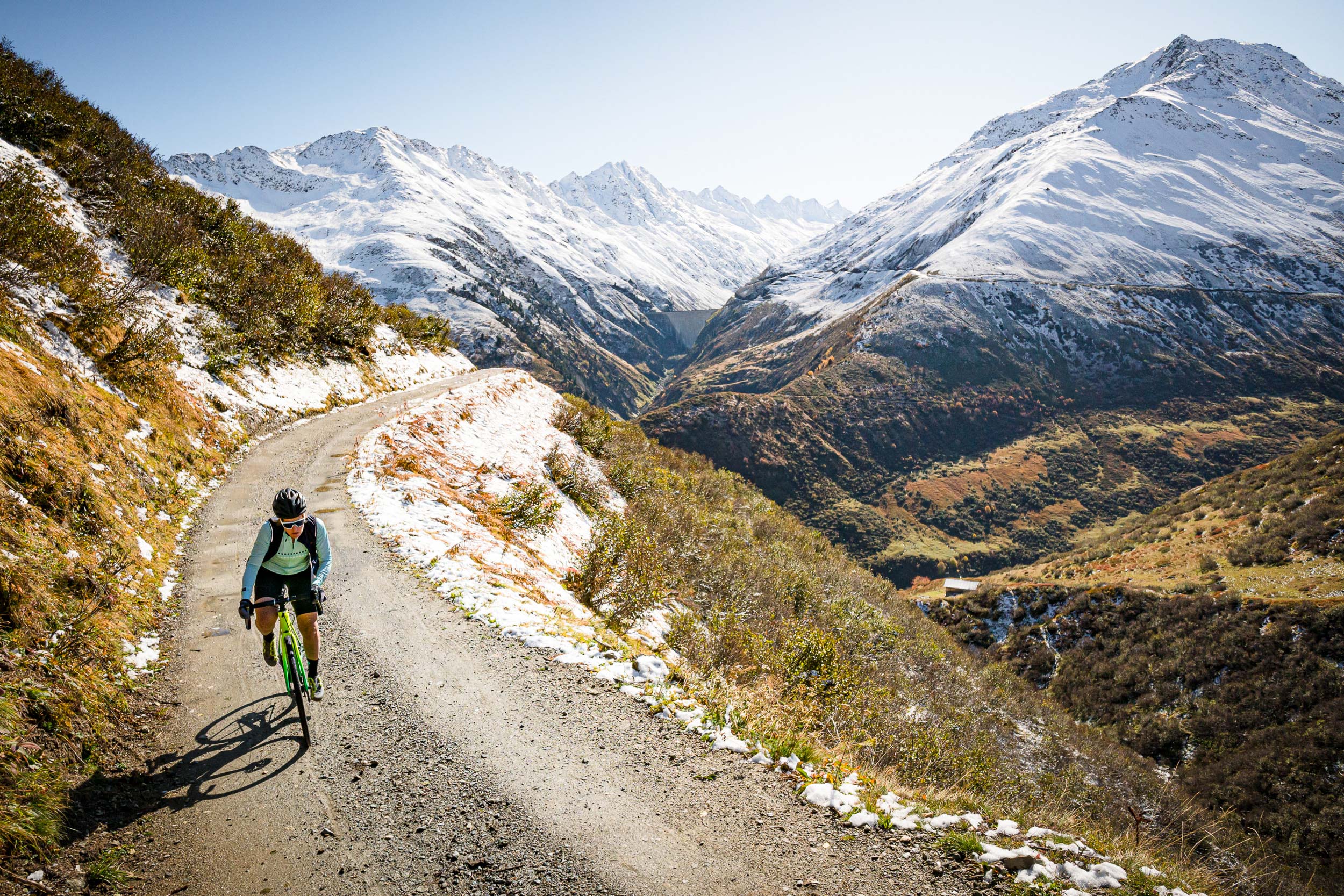 Located in eastern Switzerland, Graubünden is the largest Swiss canton. It is home to some of the most beautiful passes in the Alps: the Flüela, the Albula, the Ofen and the Umbrail, the hidden face of the Stelvio where Tom Dumoulin almost lost the Giro in 2017 after a forced nature break. I’ll talk about those another time. Because last October, I went there on a different mission: to explore the sources of the Rhine on a gravel bike.

With a length of 1,230km, the Rhine is the longest river of northern Europe. It originates in two distinct valleys, the Anterior Rhine and the Posterior Rhine. These valleys were about road passes for me: the Oberalp and the mighty Splügen.

As I was about to discover, they hold many more treasures for those who decide to venture off the beaten track. 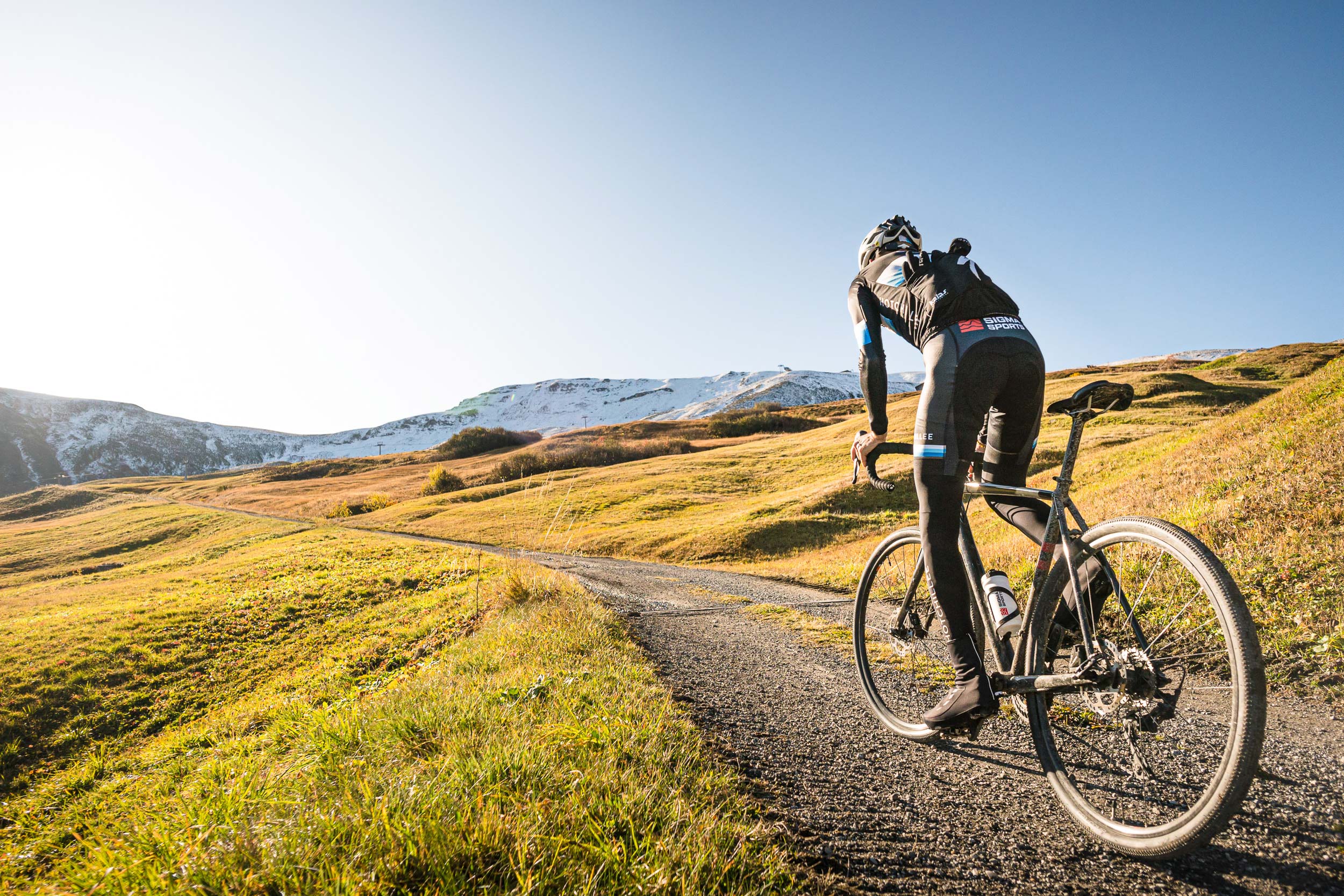 – RIDE Media and Switchback will be working together on articles about great places to ride. A little inspiration never goes astray. If you have any questions about this article or suggestions for future features, send an email and let us know your thoughts. –

At the origin of this adventure is Nathalie Schneitter. A mountain bike specialist, she was cross-country world champion in the junior category in 2004 and under-23 European champion in 2008.

Just before our escapade, she had won the first ever e-MTB world championships. She knows Graubünden, her second home, like the back of her hand, and she was going to guide us for three days. This only half reassures me when I leave: a world champion mountain biker must love to ride down impossible paths, even on a gravel bike. 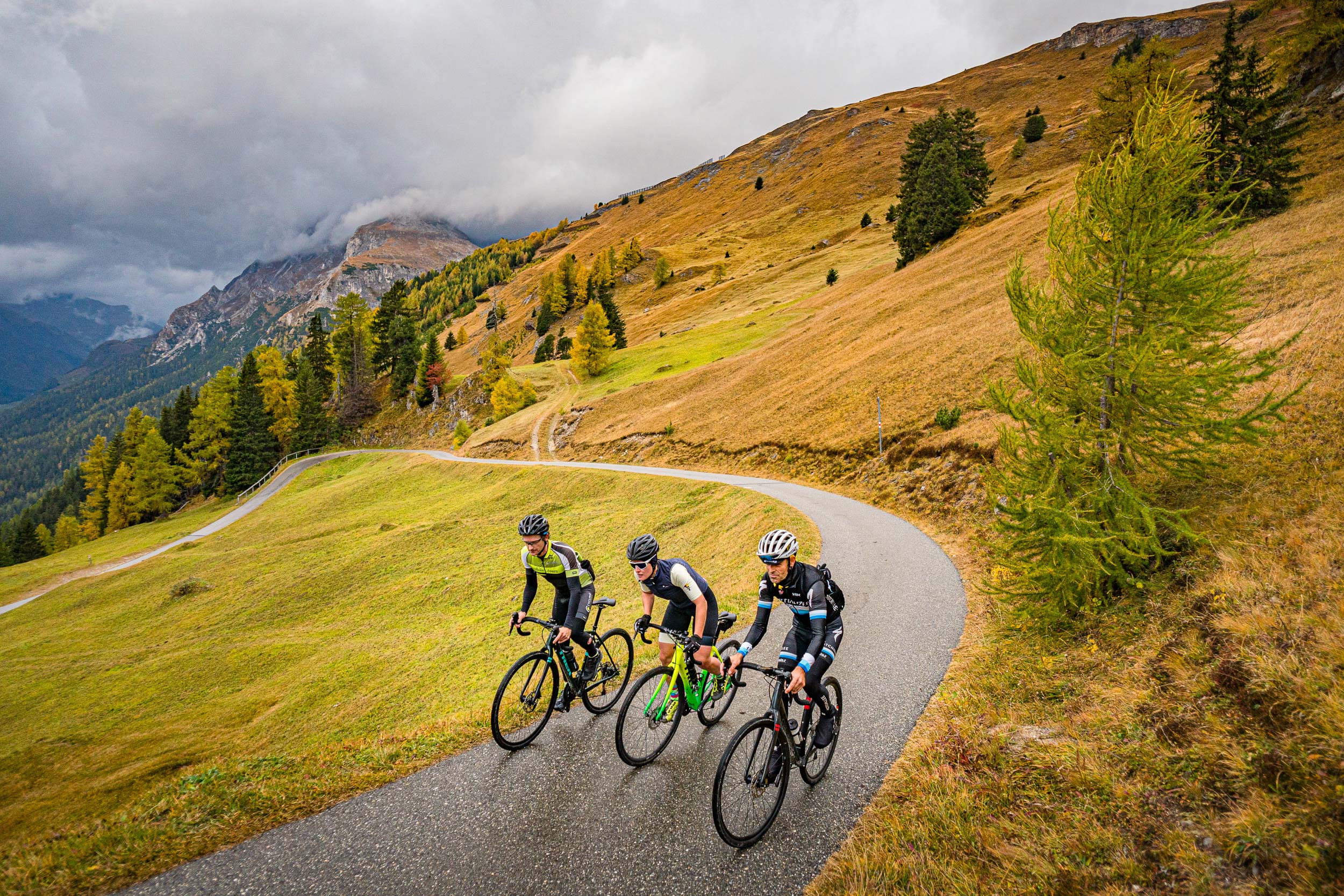 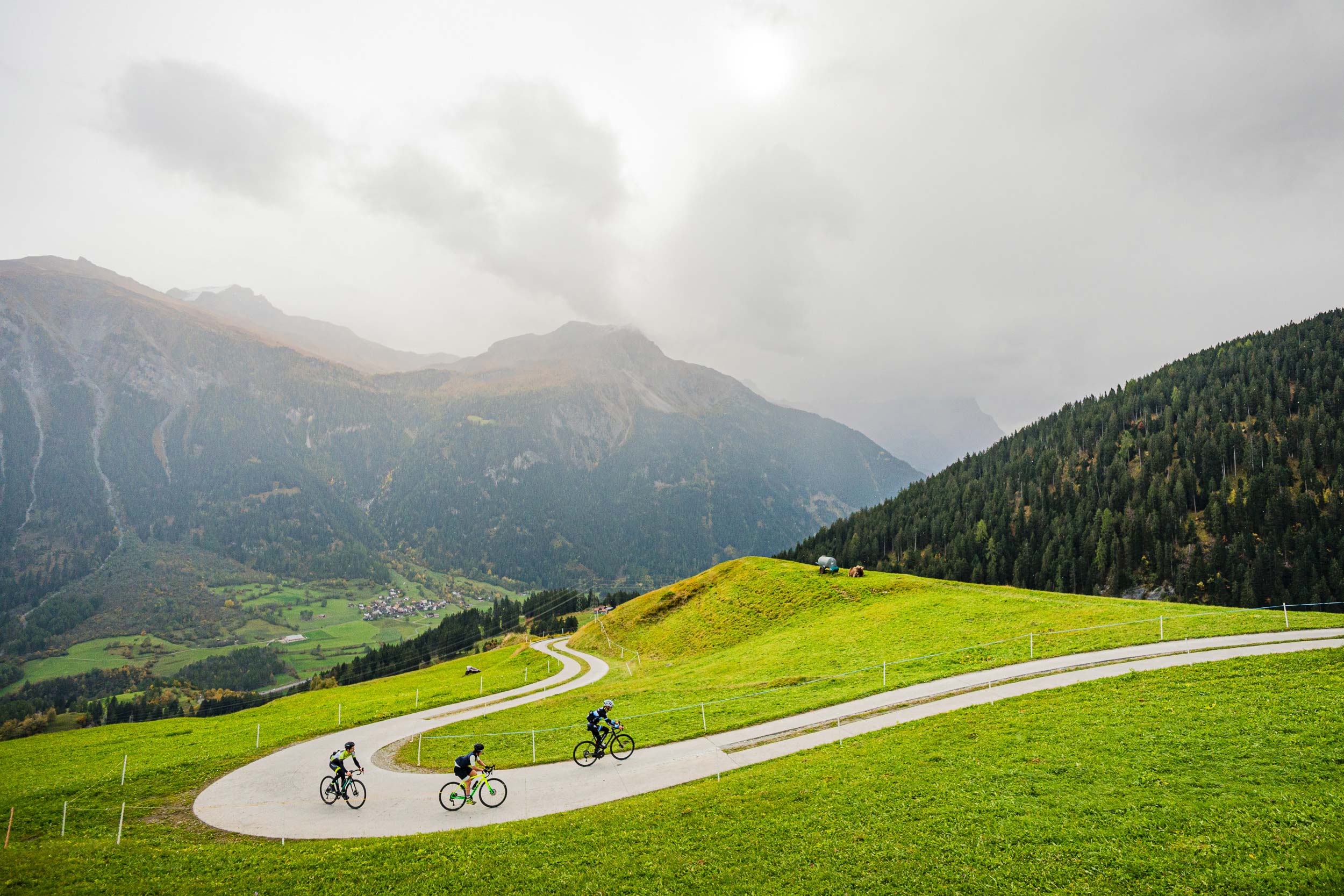 – Discover Switzerland in all its beauty on your bicycle: MySwitzerland.com –

My two companions share my feeling: Lukas, the hardcore roadie who has never tasted gravel and Ian, the former police officer from Britain who is exploring Switzerland for the first time on this tour.

We meet in the village of Splügen, at the foot of the eponymous pass in the Hinterrhein valley. A place steeped in history: the Via Spluga, which connects southern Germany and Lombardy almost in a straight line, was one of the great roads of the Roman Empire. In the Middle Ages, it was a major trade route. And it was on the Splügen Pass that Vittorio Adorni built his final victory in the Giro d’Italia of 1965, during a 19th stage in which the peloton had previously climbed nothing less than the Furka, Gotthard and San Bernardino passes. 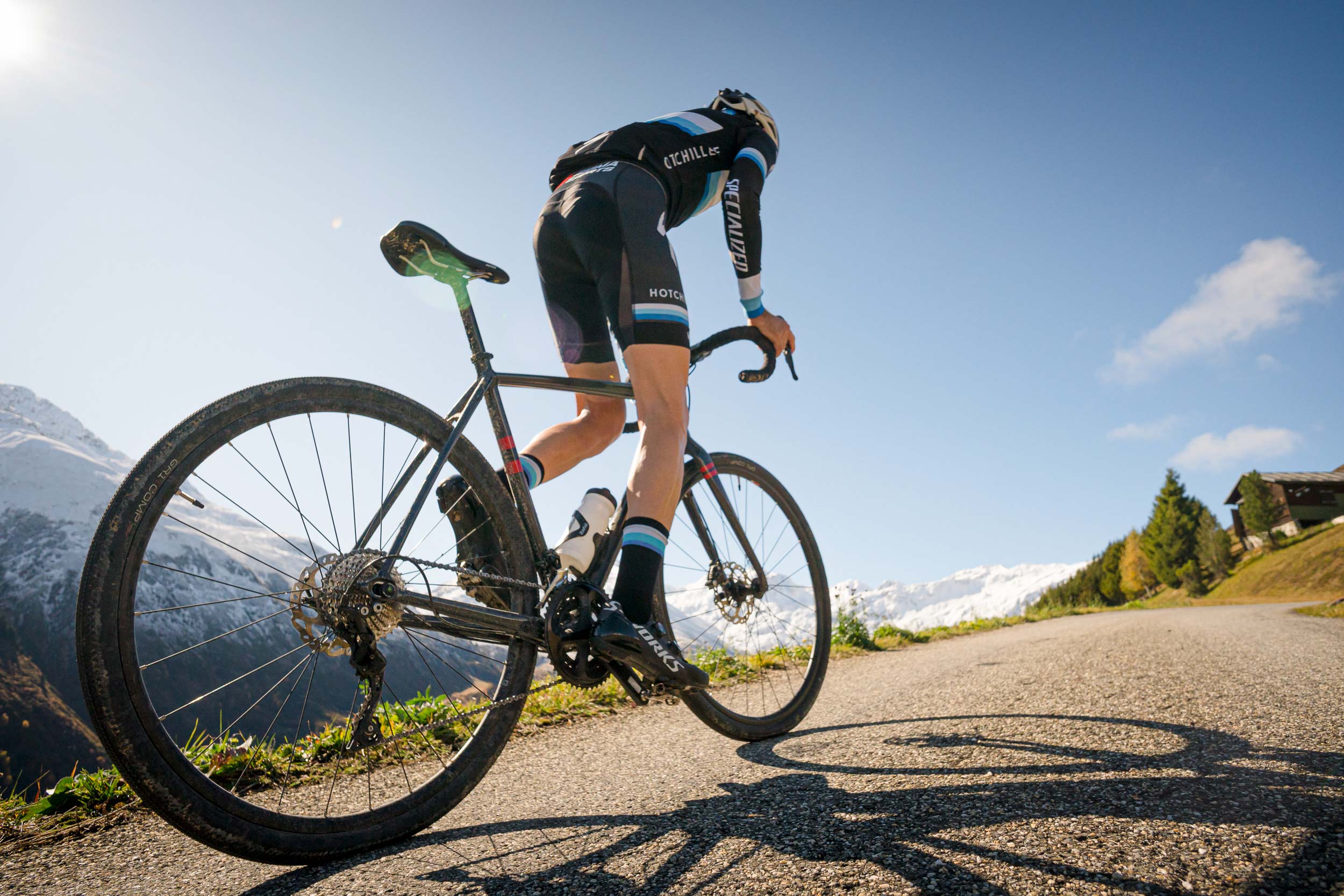 Rolling… in a different direction

On our gravel bikes, we turn our backs on this legendary route and head for the Lai da Vons. In Romansh, the fourth national language of Switzerland spoken in a large part of Graubünden, ‘lai’ means ‘lake’. Nathalie had promised us the moon, describing a breathtaking view of the surrounding peaks. However, it’s the climb that takes our breath away: at an 11% average, its 700 metres of altitude gain in just 6km. 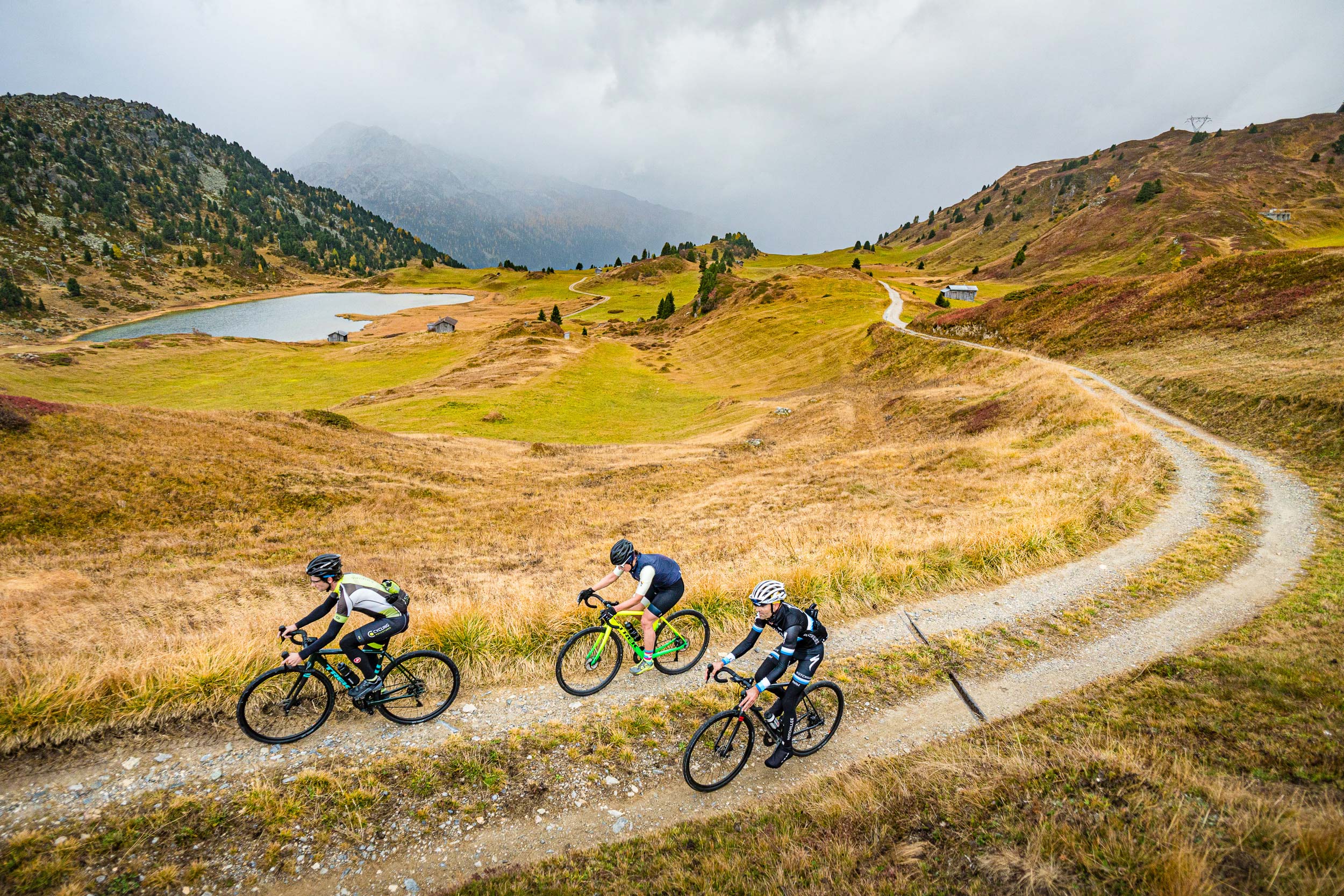 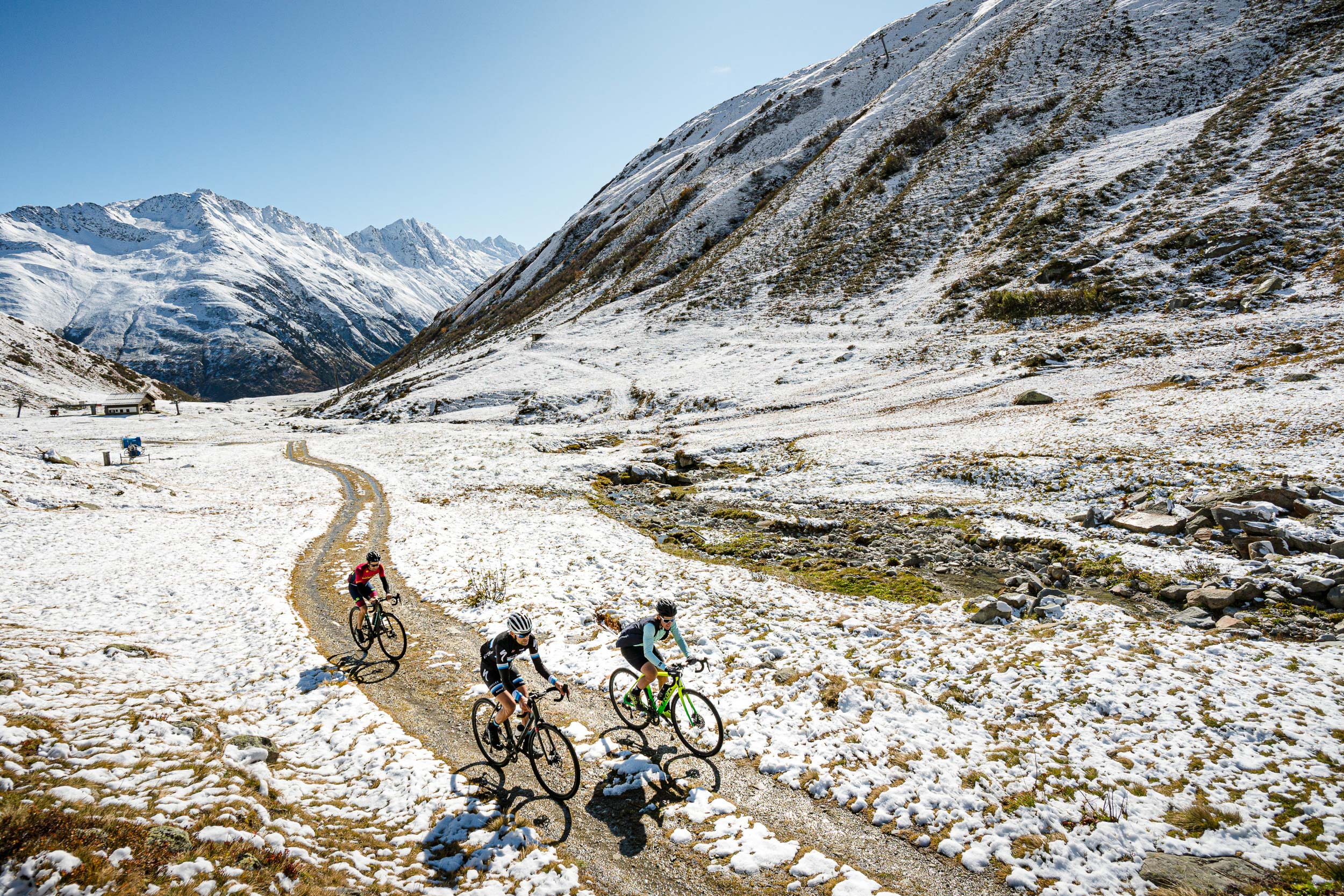 Once we reach the lake, ominous clouds replace the view. To avoid the storm that is surely coming, we head back down – as quickly as possible – in the direction of the Via Mala, or ‘bad way’ in Latin.

It is a well-deserved name: this deep gorge section of the Via Spluga, carved by the waters of the Anterior Rhine, terrified its first travellers. At the end of the 19th century, Friedrich Nietzsche described it as follows: “I shall write nothing about the terrible magnificence of the Via Mala gorge. It makes me feel as if I had never really known Switzerland before.”

Today’s motorists travel a road that no longer inspires lyrical flights of fancy. But as a cyclist, you can still venture out on the old road and experience the emotions of yesteryear: the parapet has been torn off in many places by falling rocks, and several sections of collapsed roadway are permanent markers to the harshness of nature on the Via Mala. 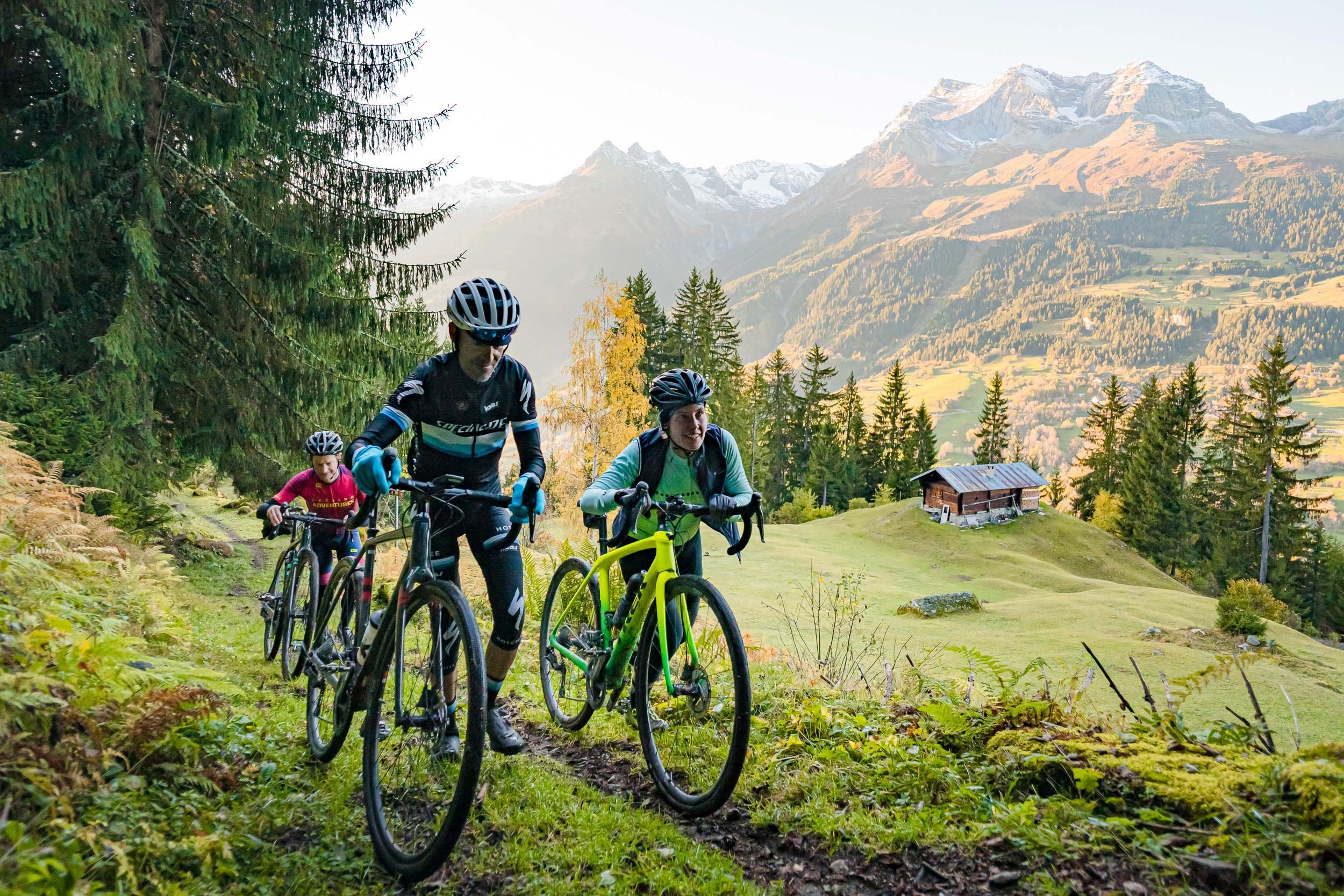 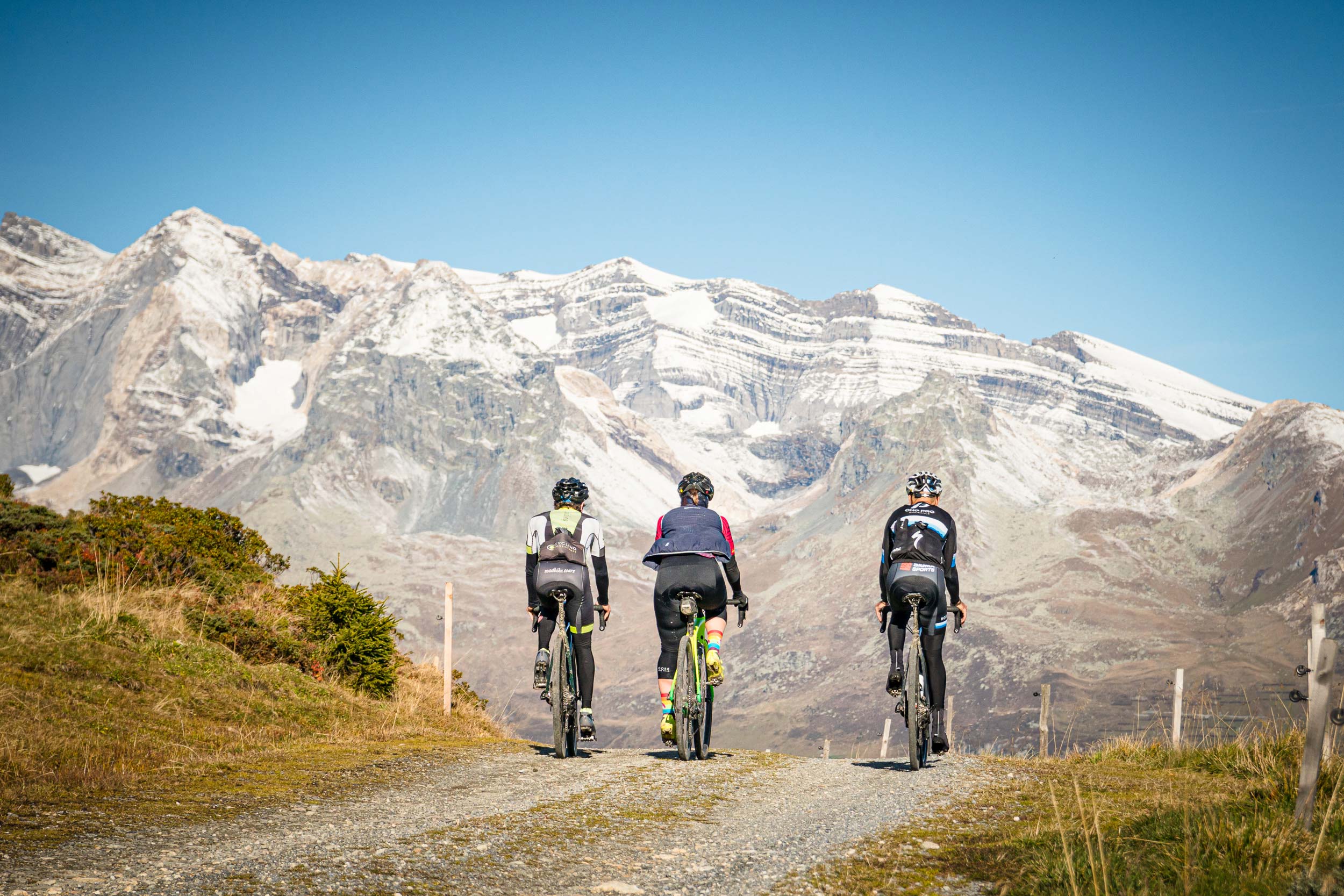 After the village of Thusis, the valley widens. Here we continue on the SwitzerlandMobility cycle route network: asphalt roads interspersed with gravel, always away from traffic. (Note: there’s a paradise for Swiss cyclists, to be found at www.suissemobile.org.)

After 66km and 1,500m of climbing, we stop in Reichenau, the confluence of the Rhine’s front and rear segments. It’s about time: the rain starts to fall as we load our bikes onto the Rhaetian Railway train, the regional network of the Grisons, which takes us to Disentis in the Anterior Rhine Valley.

This village of 2,000 inhabitants is famous for its Benedictine monastery founded in the eighth century. It houses a gymnasium (equivalent to a high school) and a hotel section with about 40 rooms with monastic comfort… We stayed here and now can say that we lived like monks – for a few hours at least. 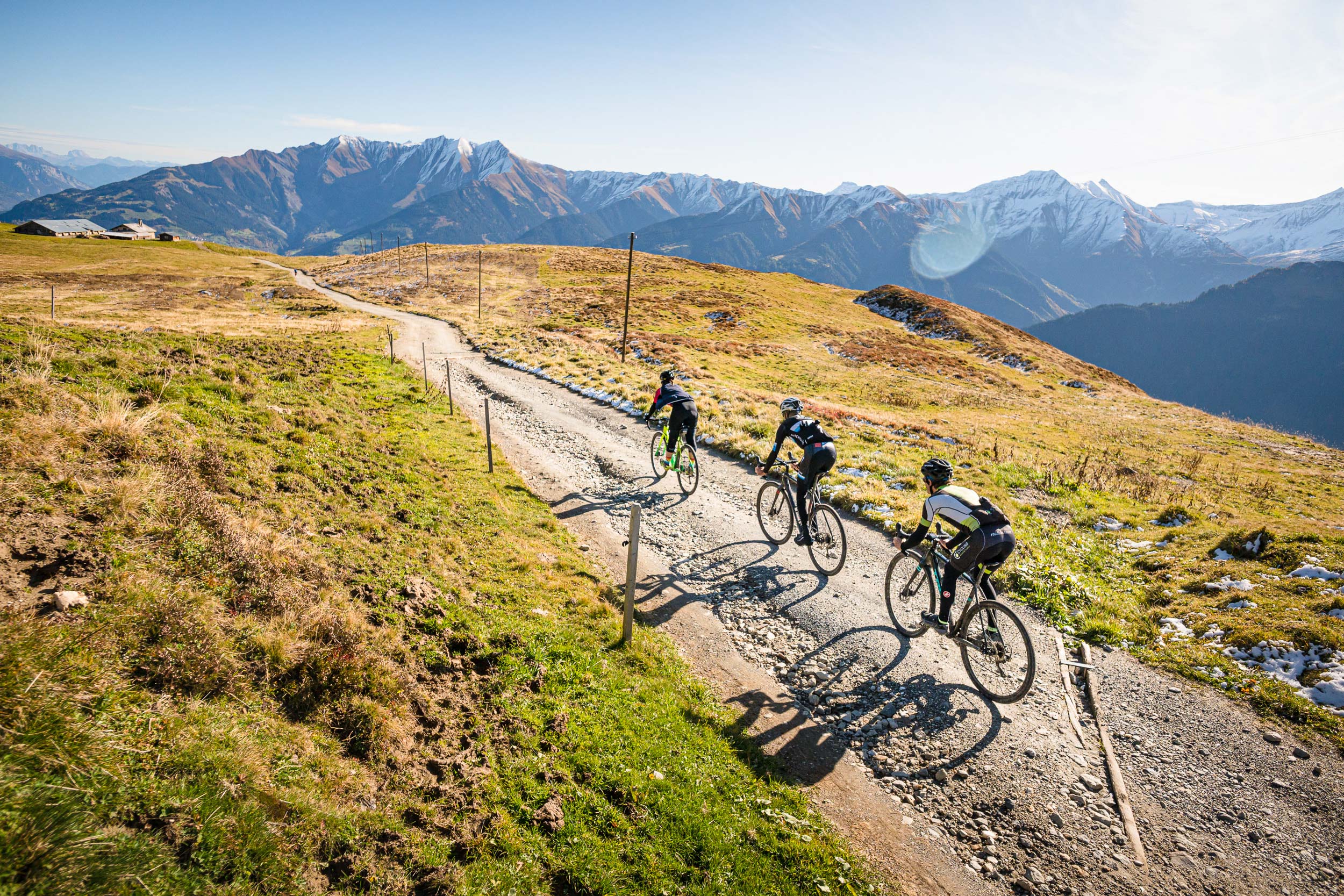 Rested and ready for what’s next

At sunrise, a pleasant surprise: the rain stopped and the clouds start to break. We catch a glimpse of peaks covered with fresh snow. We’re anxious: how high can we climb? A quick call to the Maigelshütte hut at 2,310 metres, the high point of the day’s route, cools our enthusiasm. The snow cover reaches 20 centimetres… so there’s no chance of us going up there today.

No problem, Natalie has more than one trick up her sleeve. First, she decides to take us on a road she’s never ridden to Sedrun. A discovery: we follow the train track on gravel, away from the main road up to the Oberalp Pass. 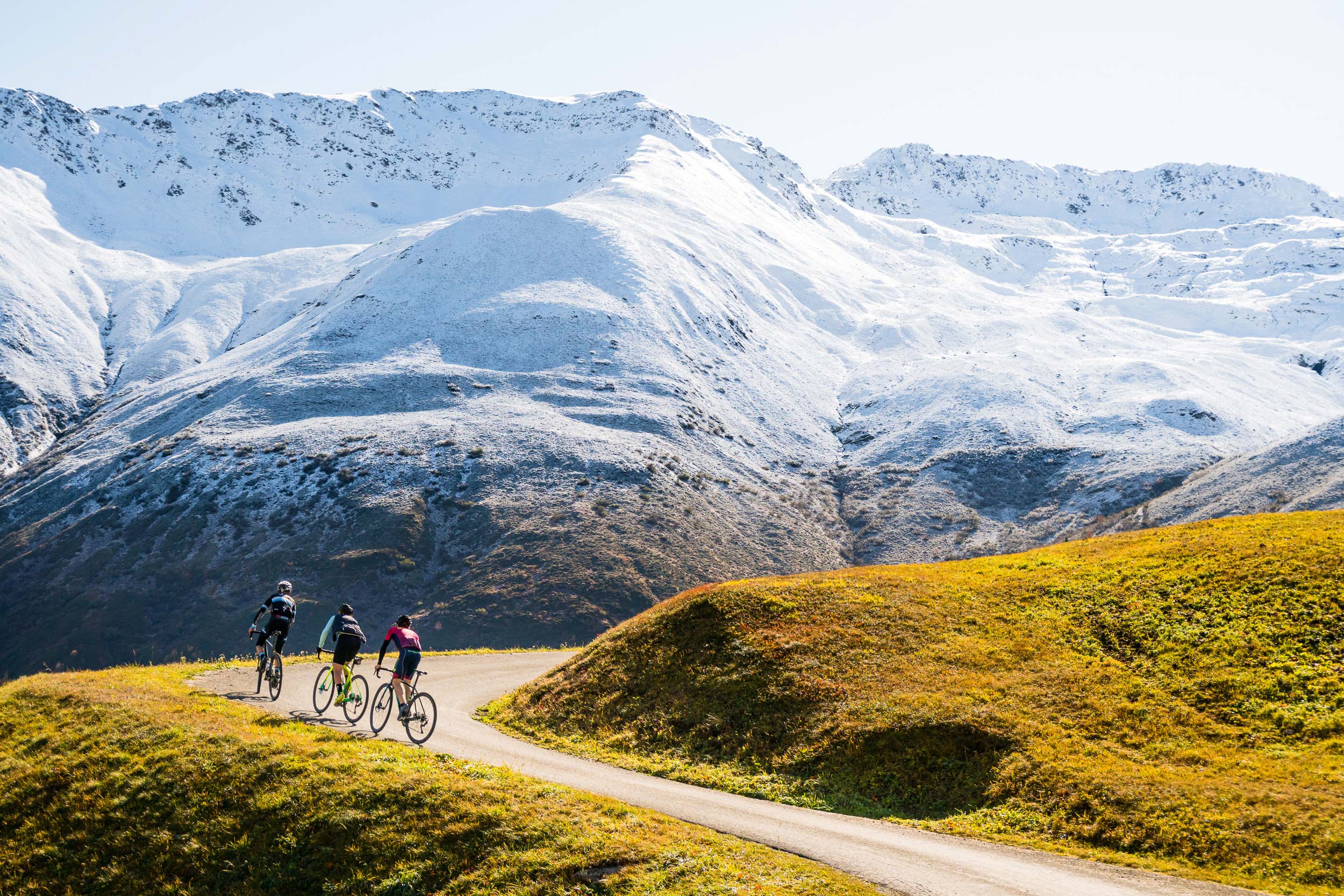 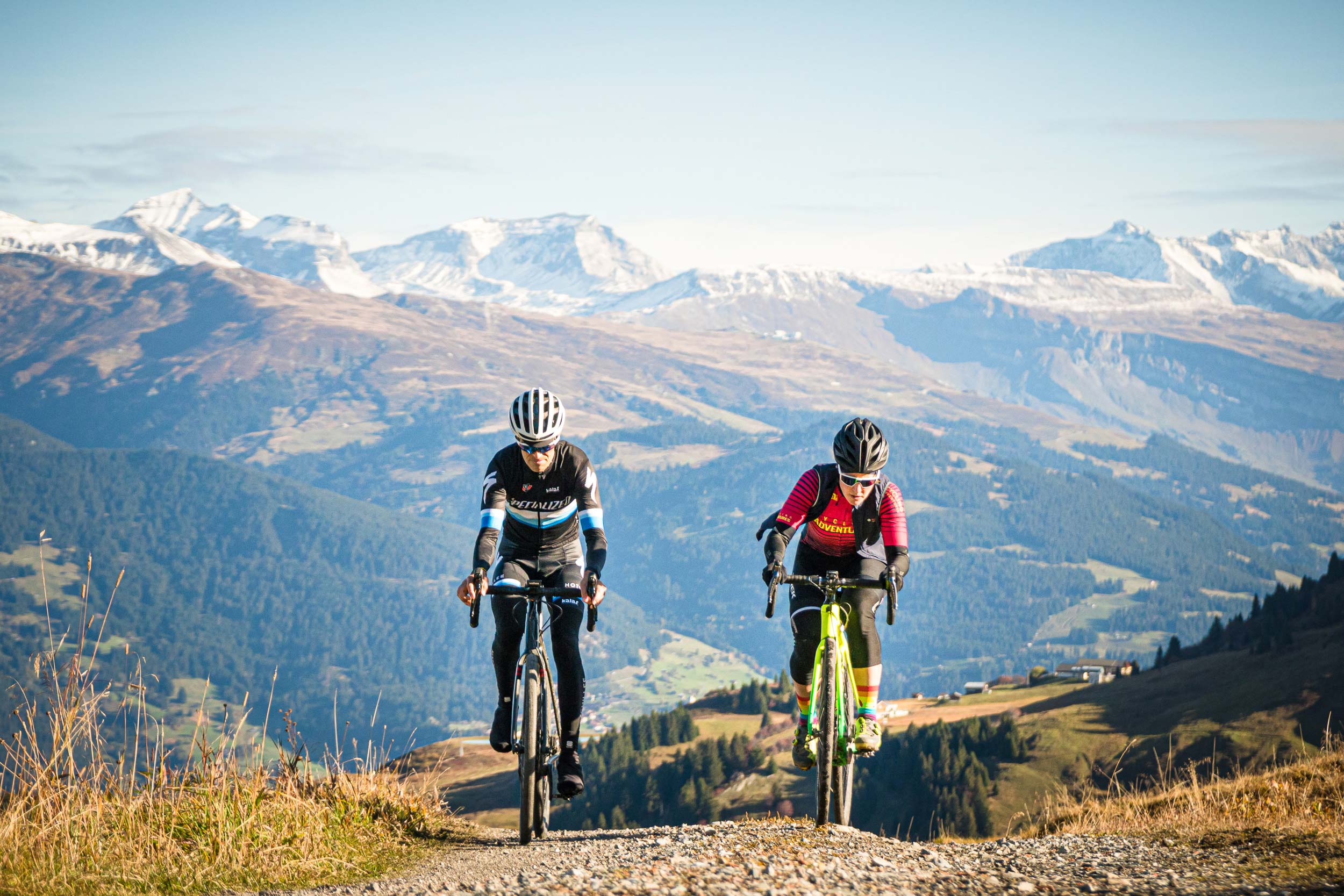 After Sedrun, we climb in the middle of the ski slopes and approach the snowline at around 1,800m. We reach it just before an intersection: we can go back down or keep on going up.

“If we go up,” says Nathalie, “we can reach the Oberalp pass.”

Her optimism and the warmth of the sun encourage us.

We set off, in the middle of the snowy pastures. After two kilometres, we stumble on a steep path and have to put our feet on the ground. Determined, we put our bikes on our shoulders and try to keep going. But after about 10 minutes, we have to face the facts: the summit is still a long way away and this territory belongs to hikers, not to cyclists.

After conceding, we turn around and join Tschamut to go down the valley by its right side. For me this is the highlight of the trip: 40 kilometres, most of them on gravel, away from villages and traffic. 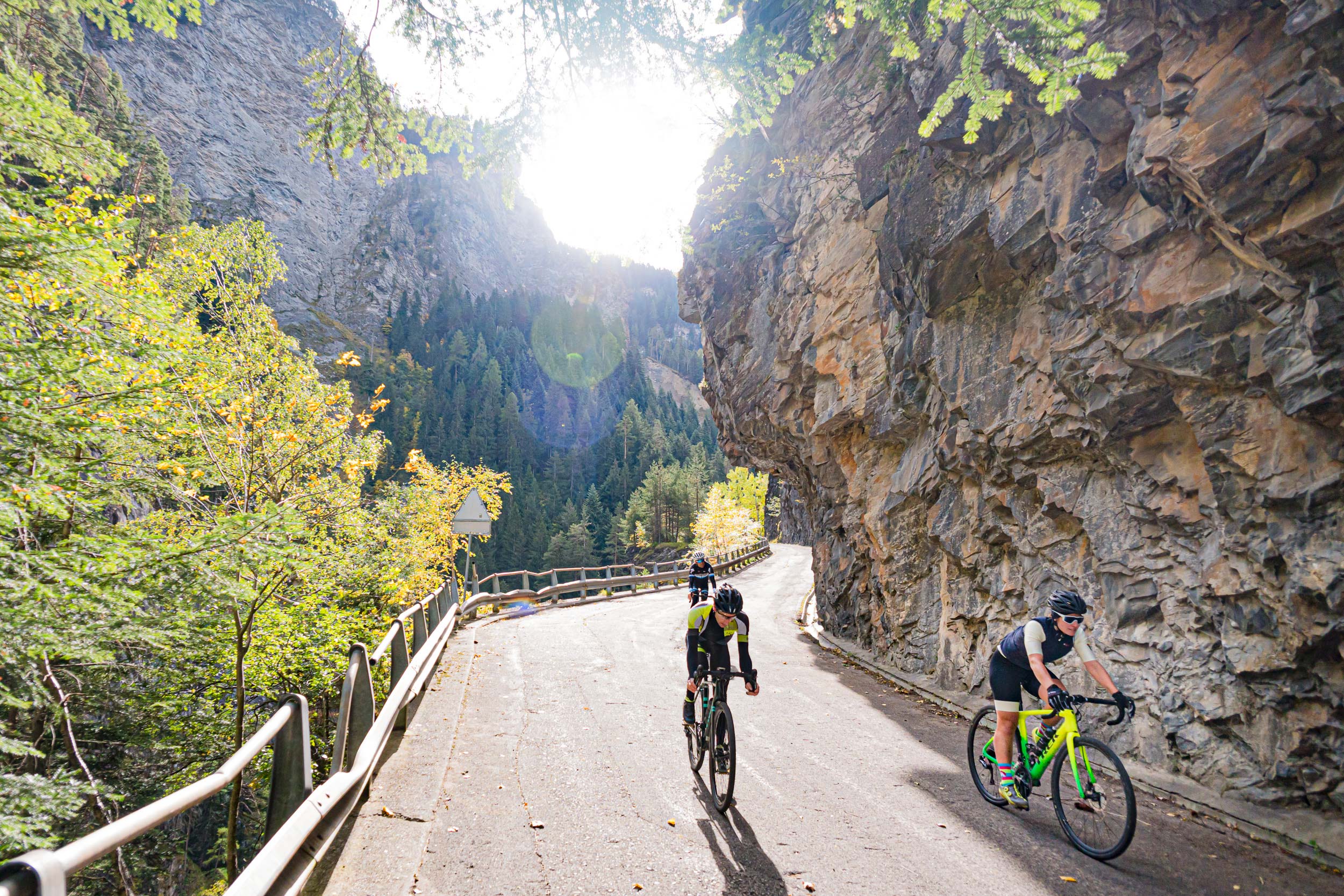 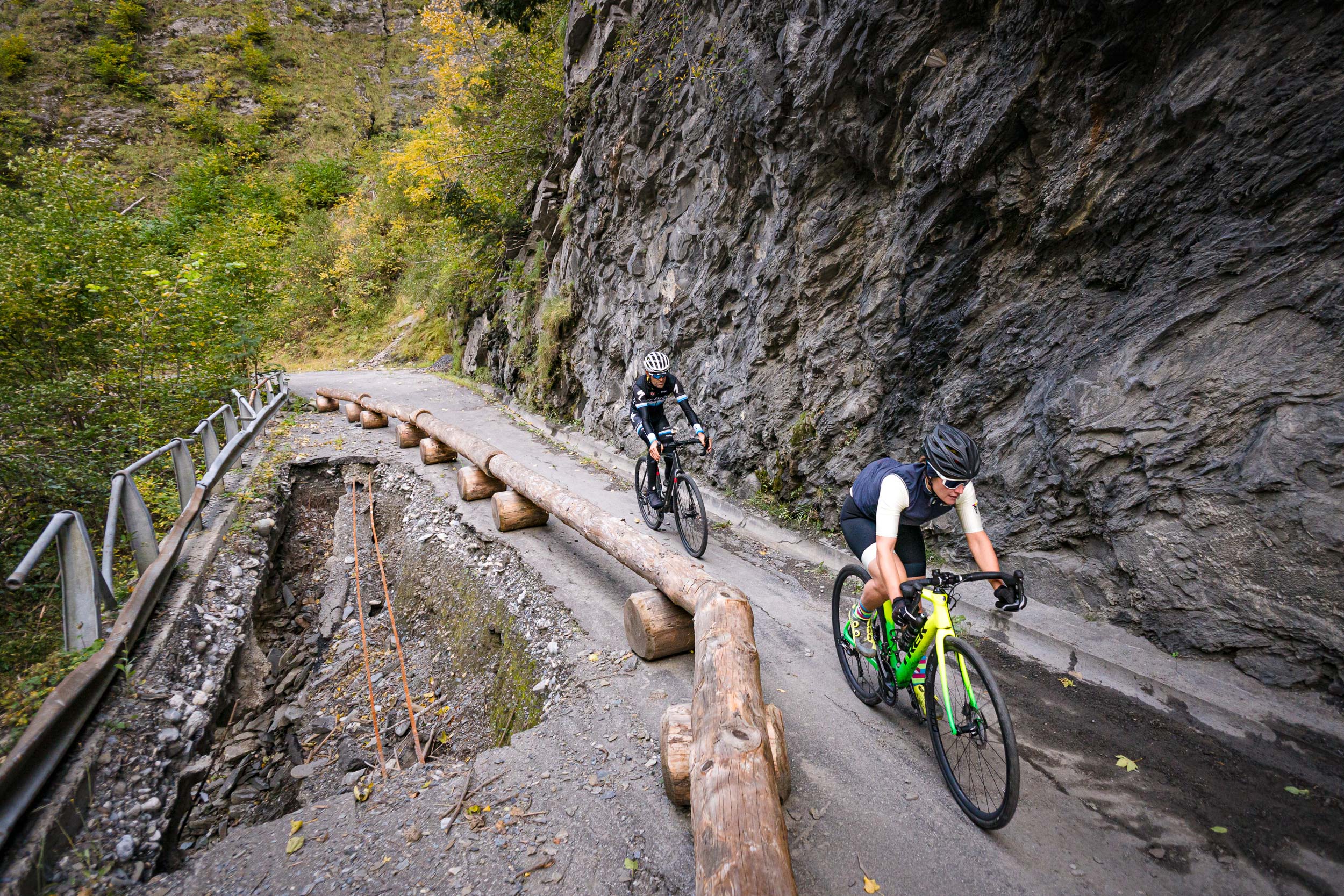 Once in Trun, we still have to go back up to our hotel in Obersaxen. There are still 700 metres to climb and it’s getting late. It’s now a slow race against the clock to arrive before dark. The hunger seizes me, I eat everything I can find in my pockets and hang on to the wheel in front. Victory! We reach the first houses just after sunset.

Today’s numbers: 77km and 2,300m of climbing. We celebrate with beer and capuns, a speciality from Graubünden made using a chard leaf stuffed with a mixture of pasta and dried meat, cooked in a broth and served with grated cheese. 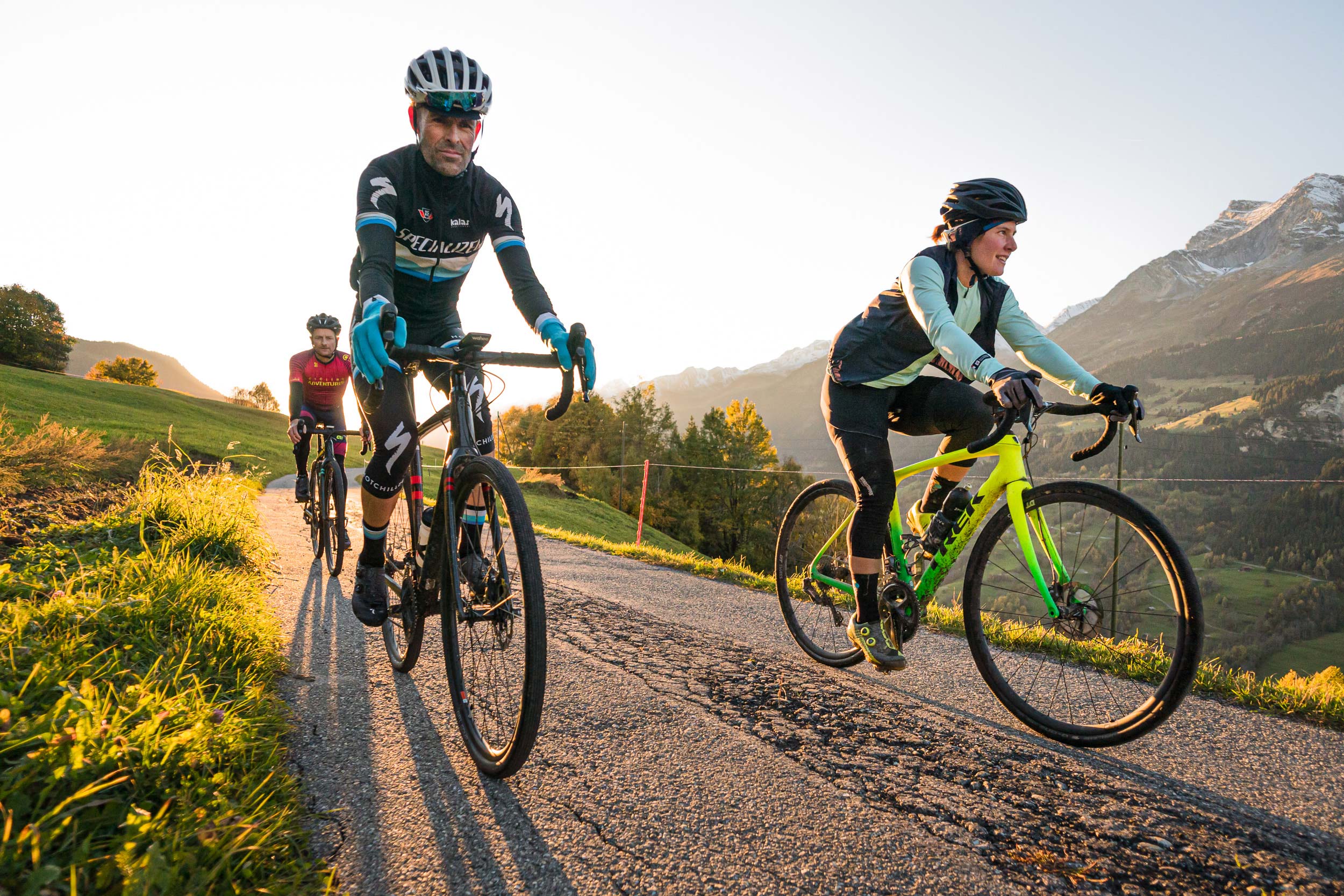 For our last day, the weather is fine. We leave Obersaxen to climb through the ski area; the view on the other side of the valley, dominated by the Tödi massif at over 3,500m is magnificent. This is a good thing, because the ascent is steep and on gravel: at a gradient of 8%, it is equivalent to a good 12% on tarmac and requires suitable gears. My 38×42 is barely enough.

After 10km of climbing, we reach the Alp Nova meadow at 2,000 metres. The path disappears and we ride in the grass among the peaks still sprinkled with snow. This is our last incursion into the high mountains: we then descend into the Val Lumnezia along a road that winds its way through hay barns scattered among the fields and pastures. A final sensation of escape before we reach the main road that takes us back to our final destination: Ilanz, the first town on the course of the Anterior Rhine. 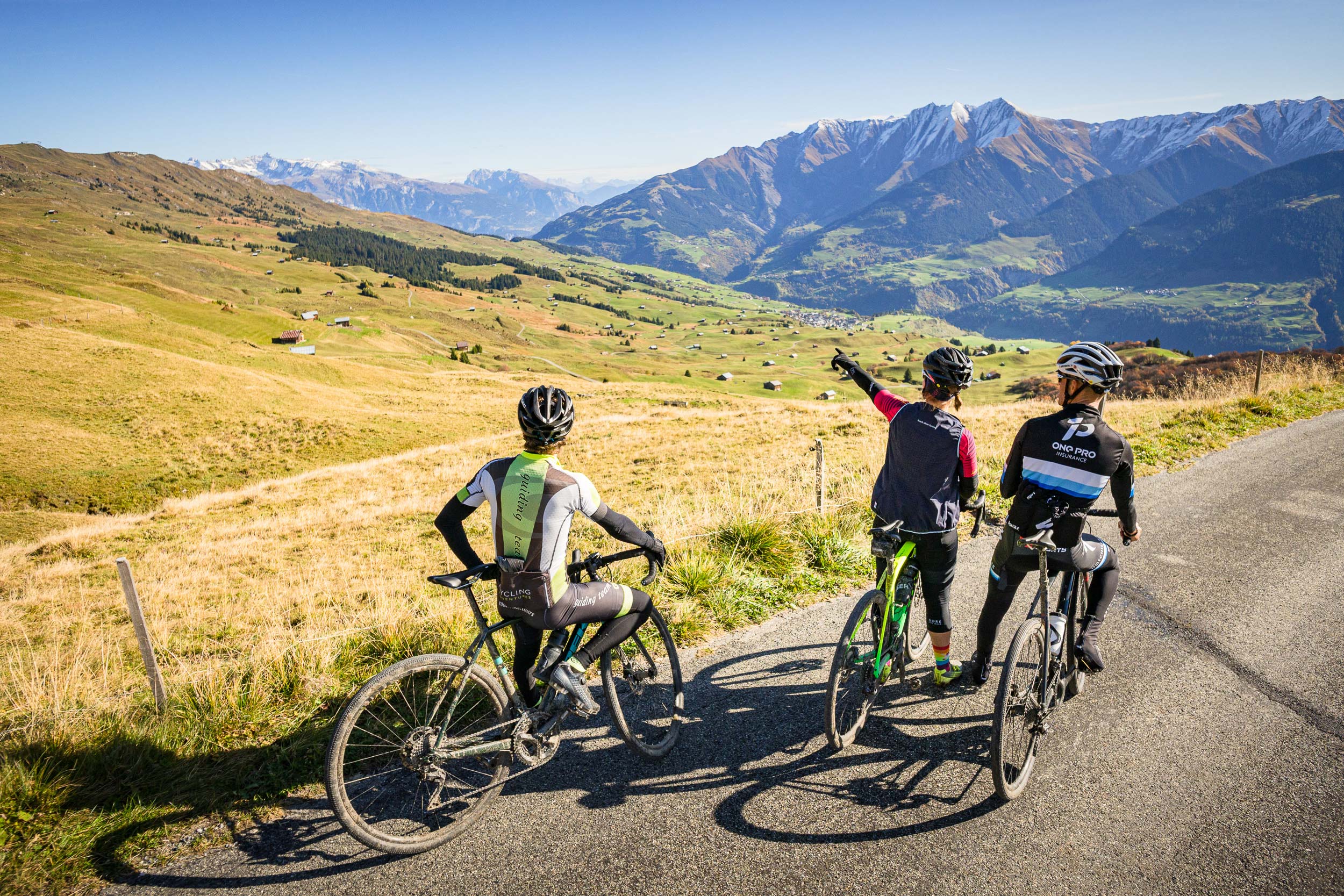 I draw two conclusions from this successful journey. Firstly, gravel riding brings together the cycling tribes like nothing else. Our motley crew became thick as thieves: Nathalie, the MTB world champion, enjoyed the trails on an unsuspended bike, a kind of return to the roots of her discipline; Lukas discovered hidden talents for off-road cycling and the art of skidding; Ian and I walked more often than our companions but had a good laugh.

Secondly, it was a way to rediscover places we thought we knew, far away from the increasing traffic that often spoils the road cycling experience. Gravel has opened up new horizons that will keep me busy for the next 20 years… at least.

Born in Switzerland, Alain has been riding his bike in the Alps since he was 12. In a previous life, he was a mediocre elite racer and worked 20 years for the UCI.

In 2014 he decided to leave the corporate world to become a professional bike bum. An ambitious career change that sees him work as a guide, photographer, writer and consultant for Switzerland Tourism, Rapha, Scott, Apidura, Strava, Vélo Magazine, Chasing Cancellara and more.