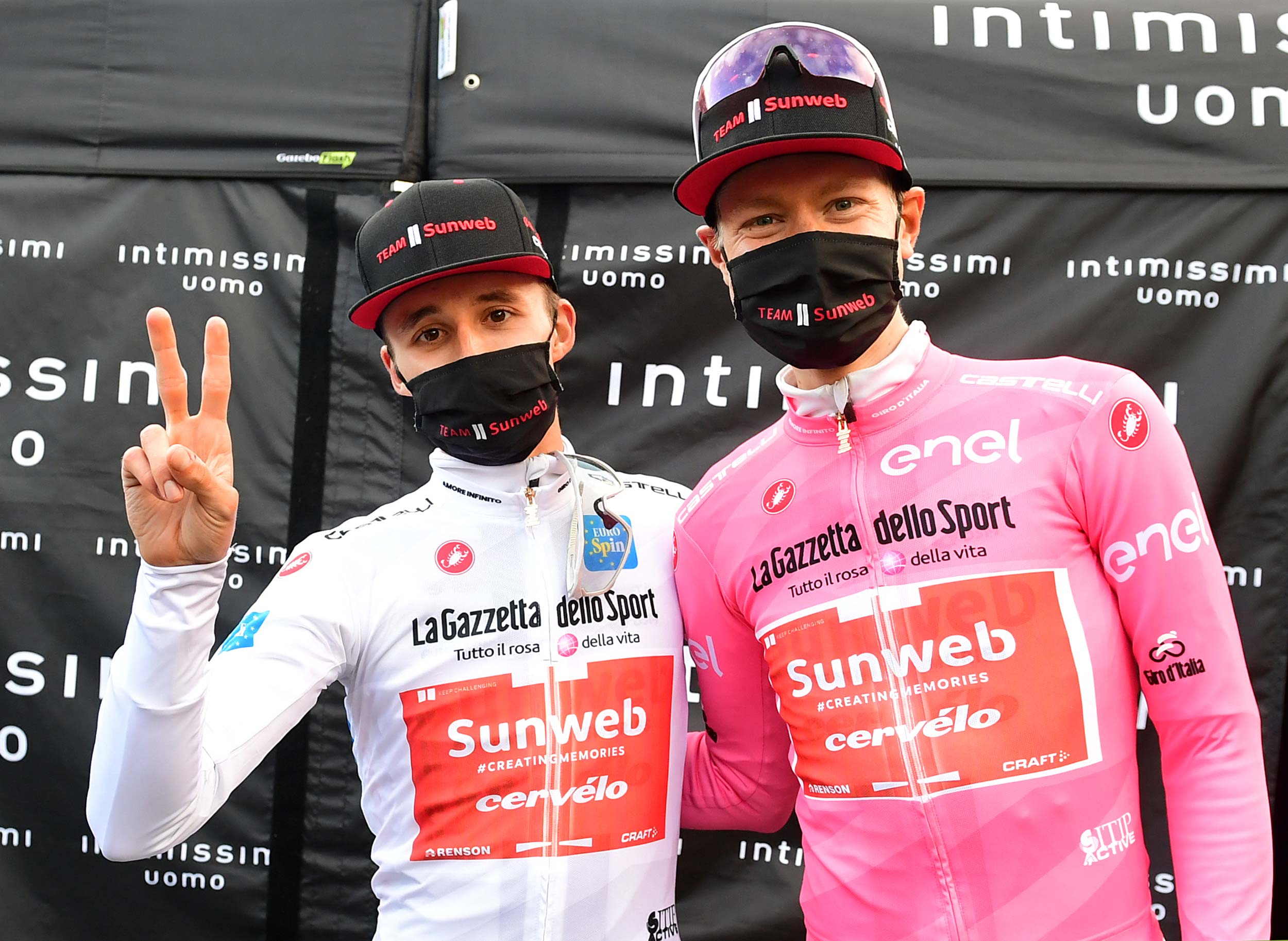 Jai Hindley and Wilco Kelderman after stage 18. The pair from Team Sunweb are at the top of GC. (Photos: La Presse, via RCS)

The change in leadership that many were expecting has finally happened. Team Sunweb’s Wilco Kelderman is now at the top of the overall rankings with only three stages remaining in the 2020 Giro d’Italia. The Portuguese rider, João Almeida, who has led the Giro since stage three has dropped to fifth and an Australian is now the nearest challenger to the Dutch race leader.

Jai Hindley has said he would do everything he could to help his Team Sunweb leader get into the maglia rosa. He did just that during the Queen stage of the 2020 race, but he also had to mark a key rival in the battle for GC, Tao Geoghehan Hart, the British from Ineos Grendadiers who is now third overall, just 15 seconds behind Kelderman.

While Kelderman lost time during this epic stage, surrendering 2:18 to the stage winner, he did enough to take the pink jersey off Almeida who is now 2:16 behind. 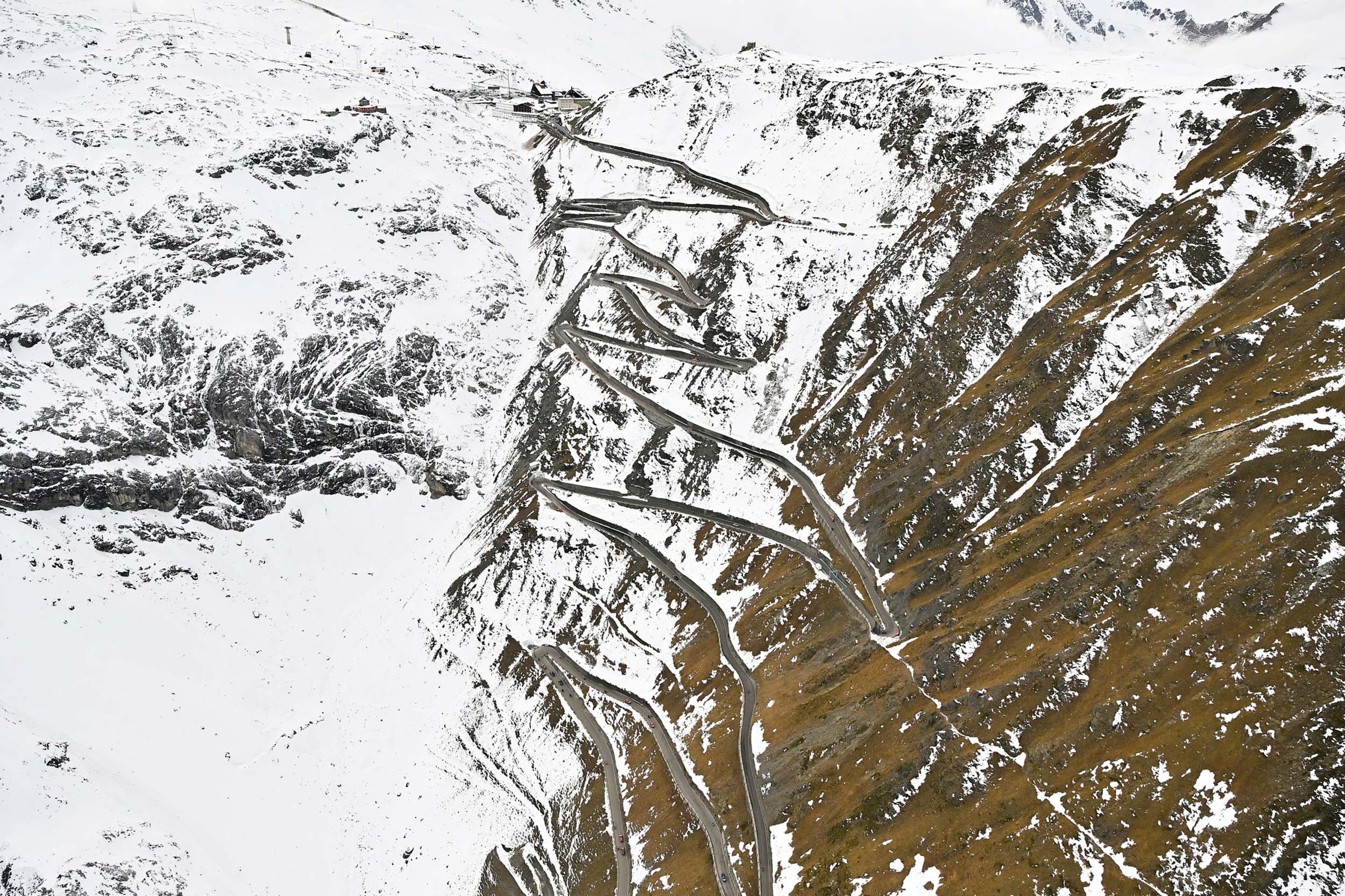 Covered in snow, but the road remains open… Passo dello Stelvio, a feature of stage 18.

On the menu for the coming days are stages that are likely to shake up the classification even more, including a 15.7km time trial on the final day. For now, however, it’s a time for Australian cycling fans to relish the reality of seeing one of the world’s finest climbers take a stage win on the day the Giro visited the epic Passo dello Stelvio.

“It was such a beautiful stage today with such epic climbs and I’m just over the moon to get the win,” Hindley said after taking the stage win. He came off the wheel of Geoghehan Hart in the closing metres and saluted his first WorldTour victory in style at Laghi di Cancano.

“I knew Tao was going to ride all the way to the line to try and get as much time as he could and I was told to sit on him and not do any work, which I did because I knew Wilco was most likely going into the jersey.” 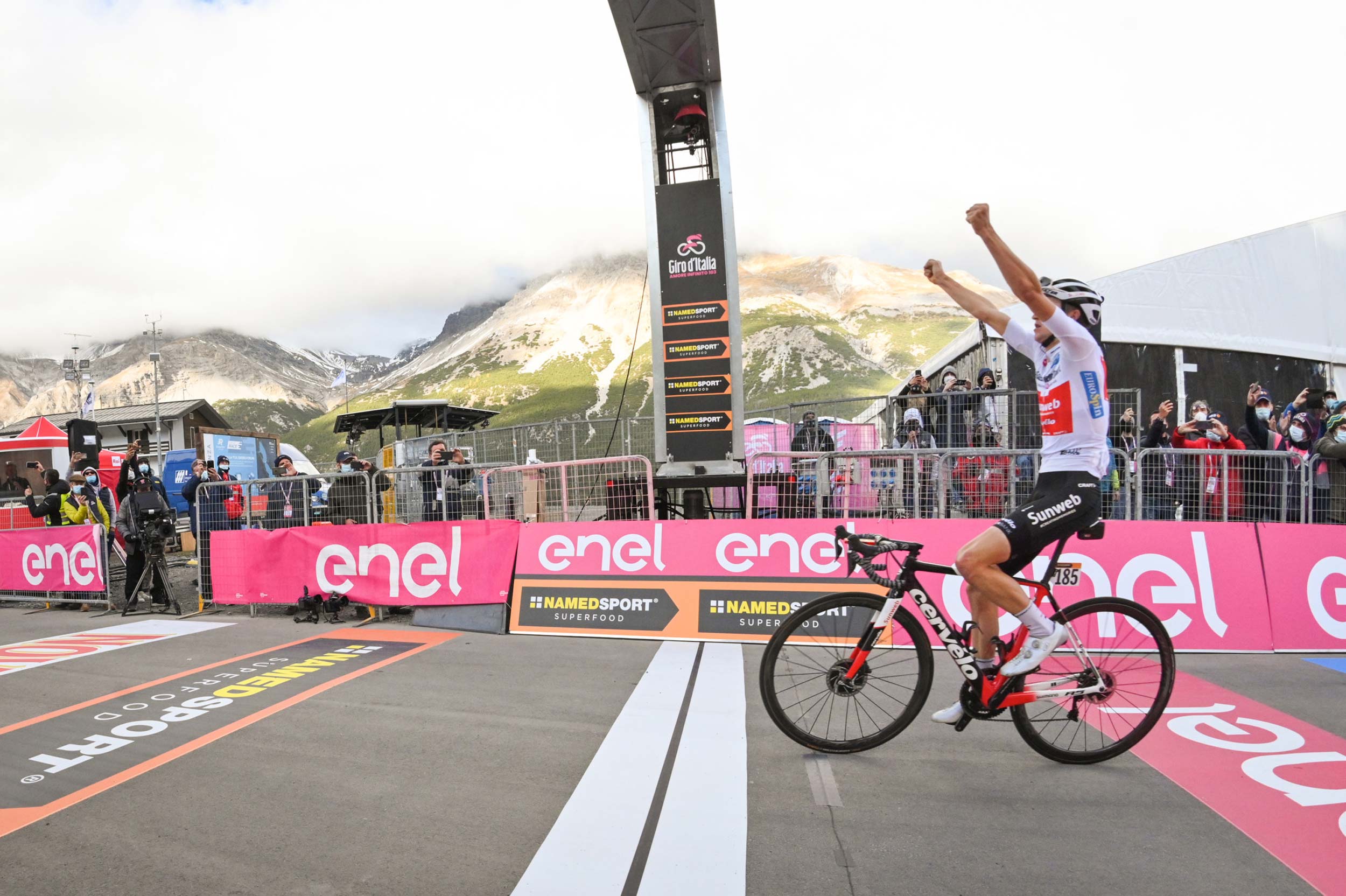 Jai Hindley takes his first WorldTour victory, a salute to savour in stage 18.

Guiding the tactics for Kelderman and Hindley is another Australian, Luke Roberts, who is the sports director for Team Sunweb at the Giro. It was Roberts who called the shots for the German-registered team in 2017 when Tom Dumoulin won the pink jersey. He’s a pragmatic DS and it is looking possible that he’ll help Sunweb earn another Grand Tour victory, if all goes according to plan for the next three days.

Roberts had to carefully manage the two challenges facing his team in the race from Pinzolo on Thursday: taking control of GC and, if it was possible – for a ‘consolation’ – also claim victory in the stage.

It just so happened that the coup was achieved: Kelderman into pink, Hindley over the line first; the Dutchman poised to possibly earn a second Giro victory for Sunweb, and the Australian now his nearest ‘rival’, just 12 seconds off the pace.

“I saw the opportunity to take a stage win – and I took it,” said Hindley about disposing of Geoghehan Hart in the two-man sprint to the line.

Jean-François Quenet, working for Giro organisers RCS, posed the questions to riders before they stepped up on the podium and, he asked Hindley, could the 60kg climbing specialist have jumped ahead of Geoghehan Hart at some stage?

“I think he was pretty strong,” replied the 24-year-old from Perth, talking about the Grenadier who raced hard all the way to the line in the quest to take time from Kelderman. “He’s also climbing at a really high level here and, like he showed, he’s been super impressive.” 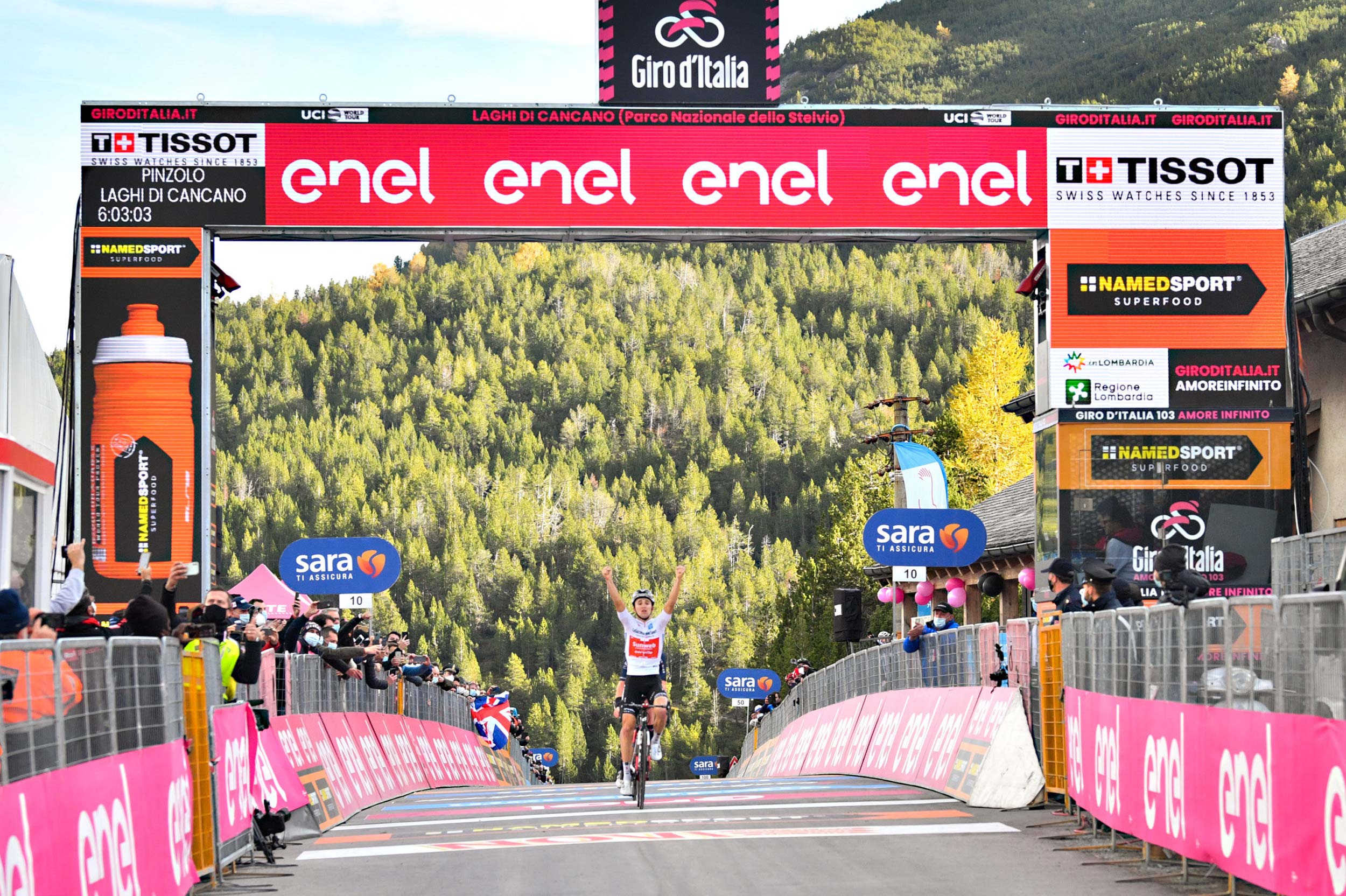 Although Sunweb earned the true coup of the stage, clever tactics needed to be employed to ensure that the team has the best chance of success in Milan on Sunday. Hindley was able to follow the pace set by Geoghehan Hart in the final kilometres, while all other riders were shelled. When the line was in sight, the West Australian sprinted past his 25-year-old rival to claim his first Giro stage win, confirm his status as the best young rider in the Giro of 2020, and put a smile on Australian cycling.

“It wasn’t our tactic for me to go solo,” concluded Hindley before he set off the collect his white jersey. “I got the stage win and I’m really happy with that.” 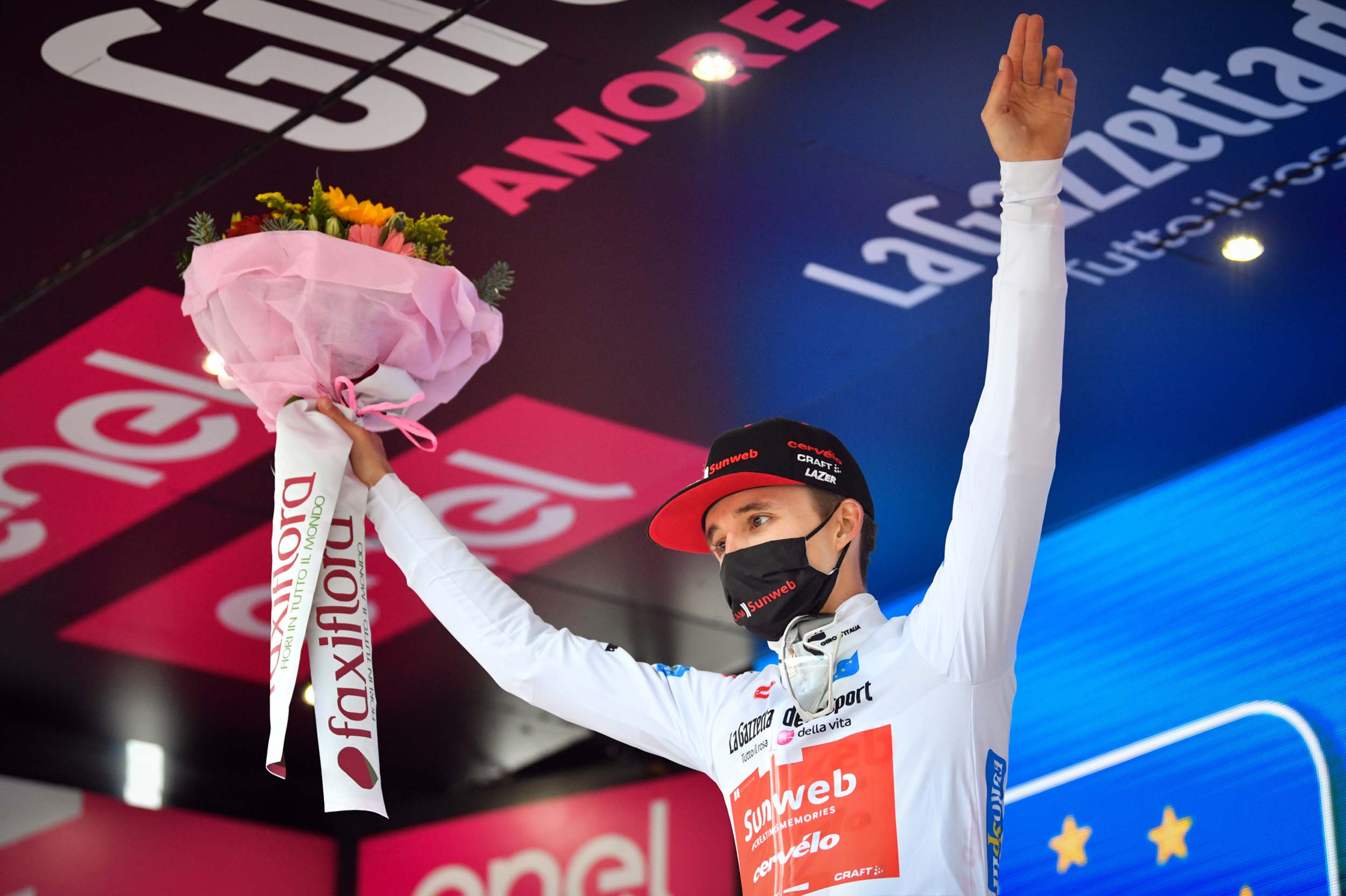 Hindley had been the ‘caretaker’ of the white jersey while Almeida also wore the maglia rosa but now the Australia, 2nd on GC, is indeed the best young rider in the Giro.

It’s been a different kind of Giro d’Italia on many levels but the race always tends to peak in the final week. That’s happened again in the delayed edition of 2020 and Team Sunweb holds the aces, with the 29-year-old Dutch race leader obviously most capable on the climbs and also no slouch in the time trial.

Still, nothing is certain when there’s so little time between the top three on GC. Kelderman’s 12-second advantage over Hindley is not the concern for Sunweb, rather it’s the presence of Geoghehan Hart in third place, just 15 seconds down, that Roberts and co will be most aware of. 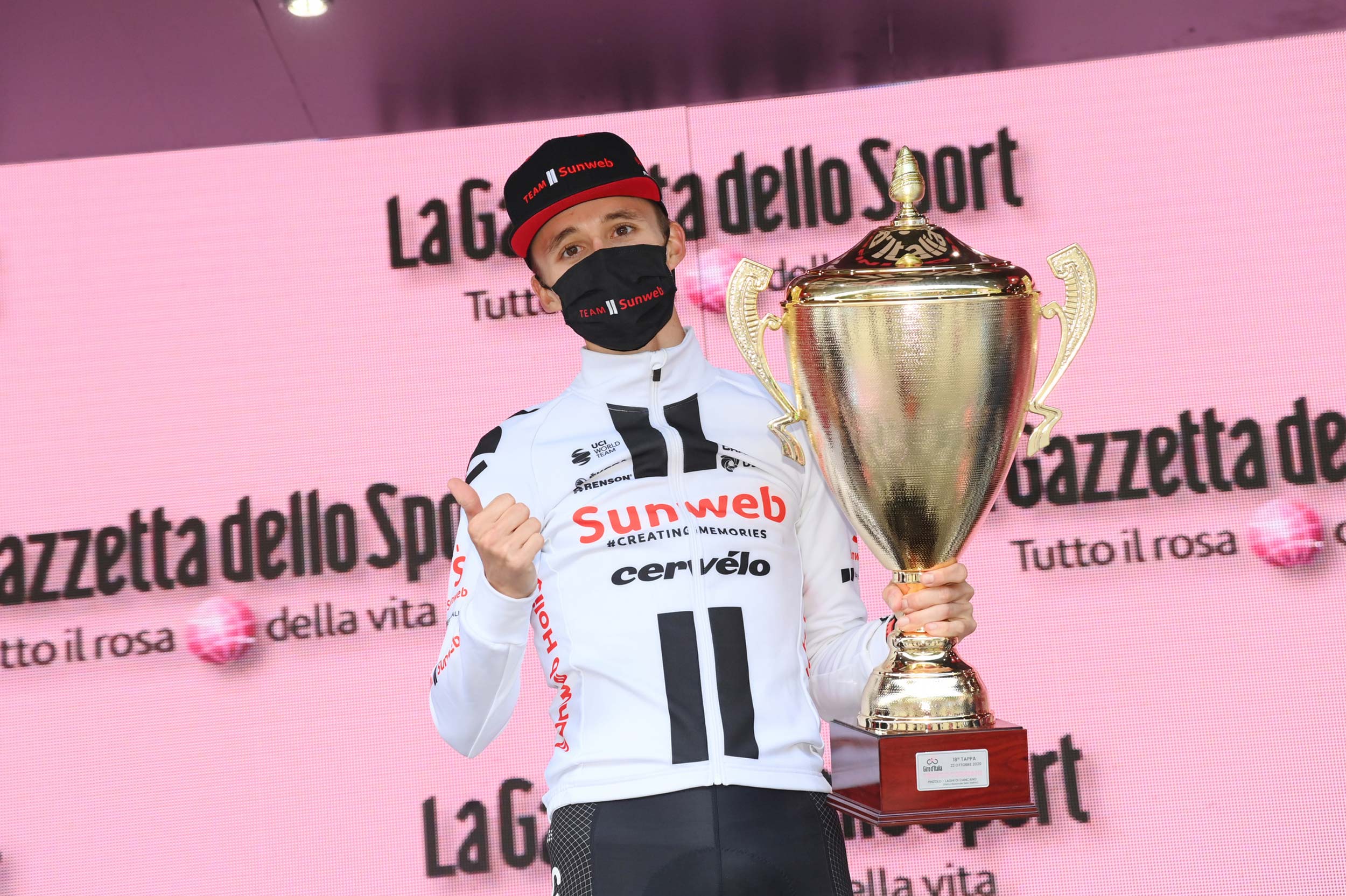 The action continues in this time of uncertainty and although the beautiful slopes of the Stelvio were largely void of spectators, the Giro is again proving to be an epic race that prompts amazing performances and genuine tension.

On Friday there’s a flat stage on the itinerary, from Morbegno to Asti, but Saturday’s race to Sestrières (on an altered course, one changed to avoid the originally planned brief visit to France) is going to be a critical one.

More mountains await and then comes the short but important TT in Milan on Sunday. For now, Team Sunweb is in command but the race is far from over even if Kelderman believes that he can keep the pink jersey all the way to the end.

“Our plan was to go full gas all day and drop João Almeida on the Stelvio,” said the Dutchman after stage 18. “That’s what we did but I could not follow the Ineos Grenadiers riders. Jai could. He also could have waited for me, but the team had different plans.

“It means a lot to me to take the maglia rosa after having had a lot of broken bones,” concluded Kelderman. “I ’m really happy to be back.

“The fight isn’t over yet. Ineos is really strong but the final time trial is in my favour. I’m confident. I’ll try to do everything to win the Giro.”

Related: Jai Hindley interview – “Just another guy who likes to ride his bike”