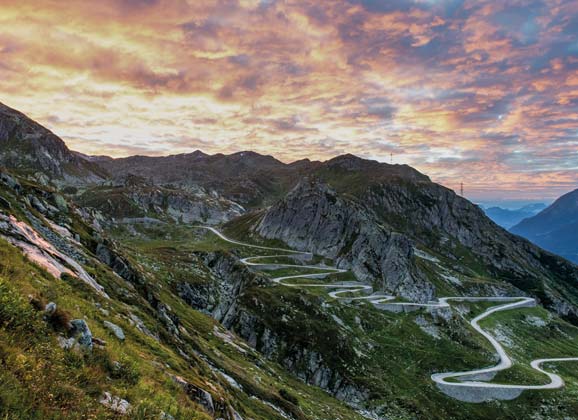 In every issue of RIDE Cycling Review we explore different riding locations. The Tour de France’s recent visit to Switzerland was an ideal way to showcase some of the wonderful roads that this landlocked country has to offer… but stages 16 and 17 only covered a tiny portion of the idyllic Swiss countryside.

Alain Rumpf has lived in Switzerland all his life and he’s thoroughly explored his country by bike over the years. In RIDE #72 (on sale now) he explains some of the quirks of Swiss culture, but also the reasons why it’s the ideal place for a cycling holiday.

Below is the 57th instalment of our popular ‘Caffeine Culture’ series…

(For more about riding in Switzerland, be sure to MySwitzerland.com) 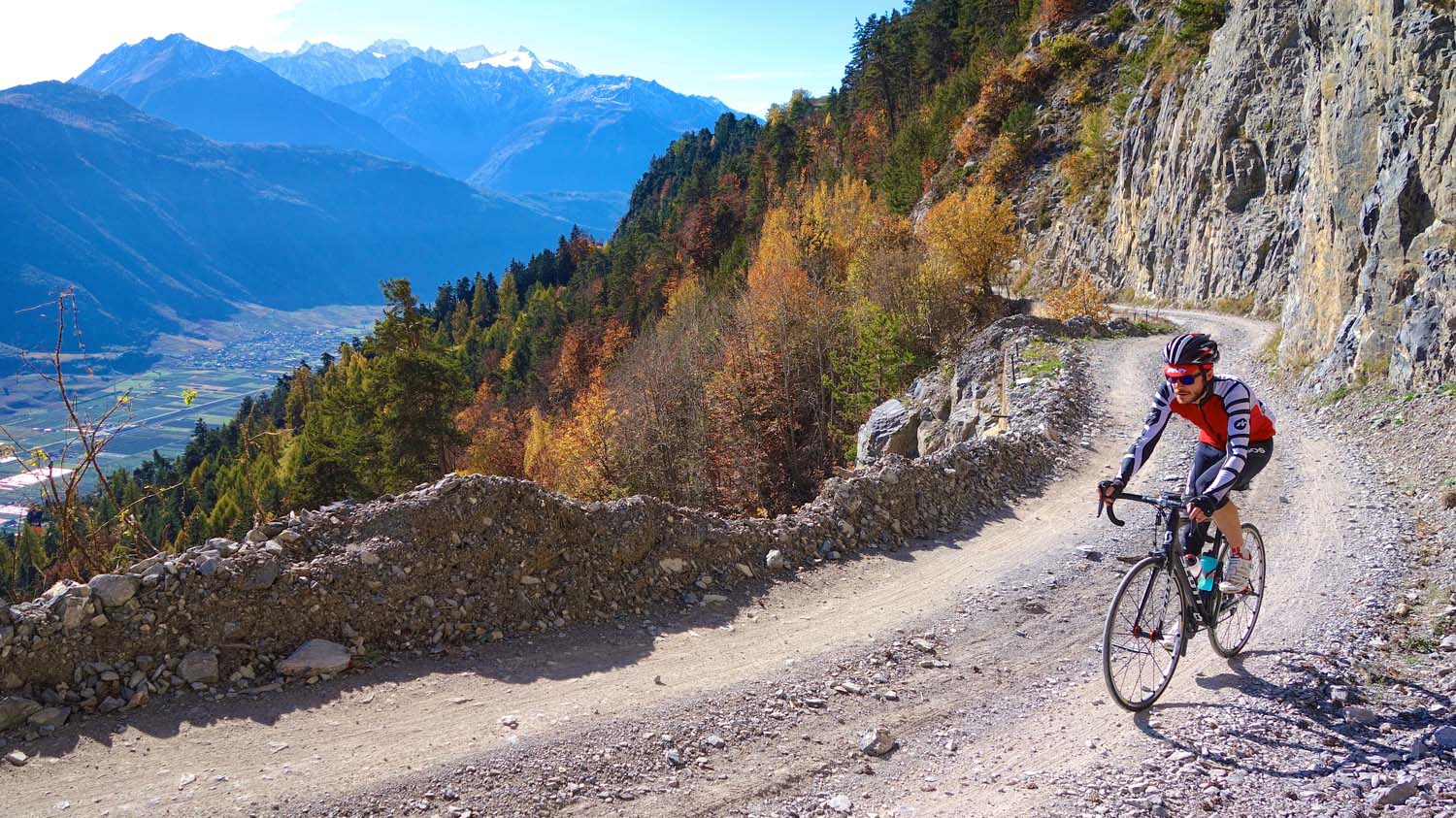 There are tunnels for the traffic and roads paved in Roman times for cyclists. There are what seem like endless climbs and descents. There are postcard settings as part of almost every ride.

I was born and raised on the shores of Lake of Geneva, one of the few “flat” areas in Switzerland. But I was never far from the mountains and I loved climbing them on my bike as soon as I started cycling – and racing – when I was 12. So, many years later in 2001, when I had a chance to move to the ski resort of Villars in the French-speaking part of the Swiss Alps, I never looked back. I embraced the simple lifestyle of the mountains: being close to nature; eating healthy, natural food (and cheese); following the rhythm of the seasons… ski in winter, ride in summer, and repeat.

Sometimes, however, this rhythm is disrupted. Winter came late in 2015. As a result, I rode my bike every day between Christmas and New Year. No complaints here. It can also go the other way… as I’m finishing this piece, snow is falling on our chalet. It’s the first week of May! Only last weekend, Chris Froome won the queen stage of the Tour de Romandie, which finished just down the road, holding his hands up in victory under the sleet of the arriving storm. Watching that unfold, it was difficult to believe that, only a mere couple of hours before, I rode in beautiful weather on a postcard-perfect spring morning in the Alps. Tomorrow, surely, the sun will be back. Then, through to around the end of October, it’s riding season!

Switzerland is an underrated cycling paradise. And the government is beginning to realise what opportunities this actually presents. For years the tourist brochures talked almost exclusively about the opportunities that existed for skiing enthusiasts but there’s a change taking place. Cycling is now recognised for what it is: a pastime that prompts people to travel. And for cyclists, there are a wealth of wonderful places to visit. 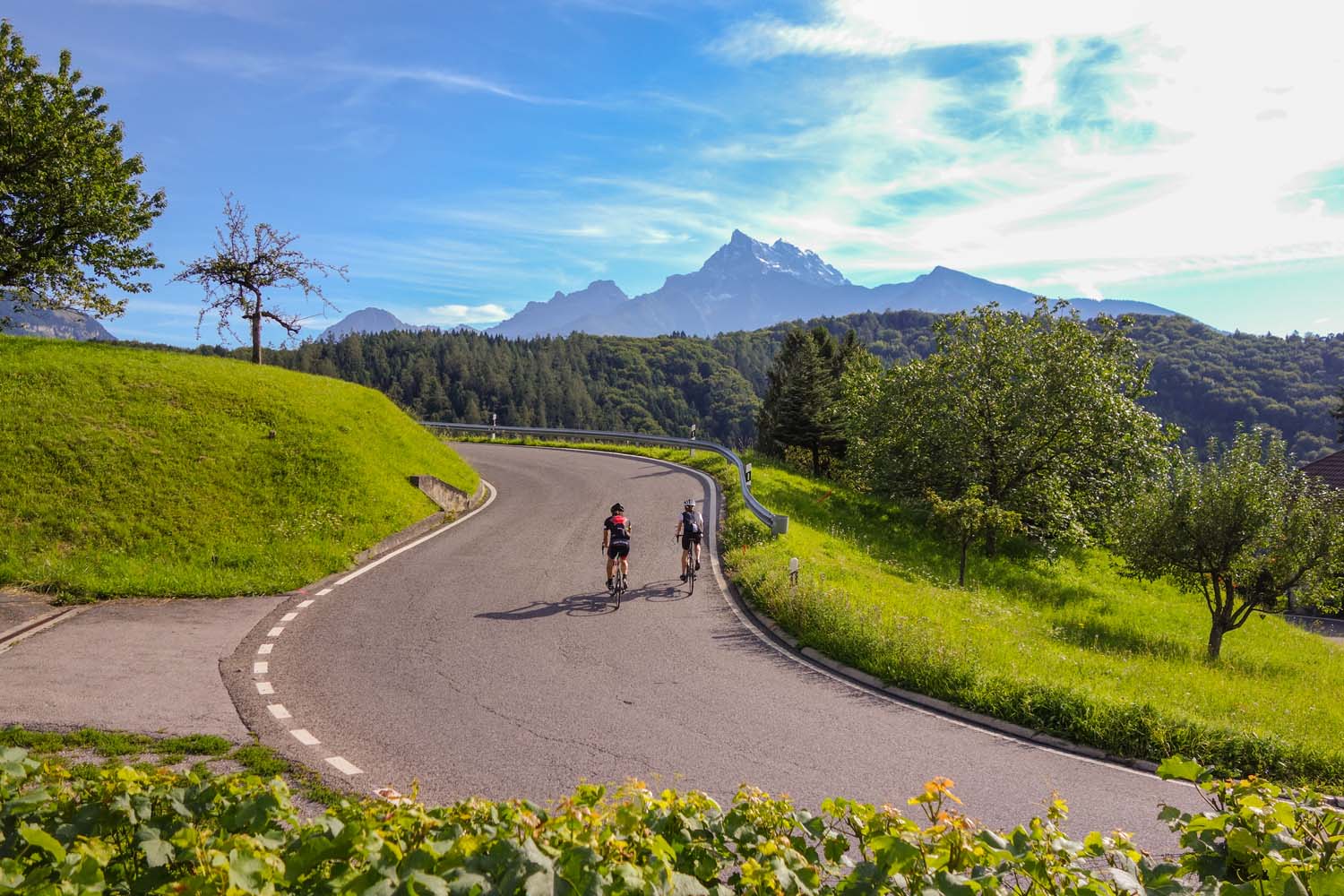 In every region, the riding options are endless. Flat riding routes exist around the many lakes between Geneva and Zurich. There are rolling hills in the northern part of the country with amazing roads winding through peaceful meadows and farm pastures. There is even a network of nine national – and 123 regional – bike routes using mostly small, perfectly surfaced roads with minimal traffic. Frankly, this makes riding in Switzerland a much better experience than in many other popular European cycling destinations. And this explains why there is now a significant push to remind people of what’s on offer in Switzerland. Not only is the nation hosting a couple of stages of this year’s Tour de France (and a rest day in the capital, Bern), it is actively encouraging cyclists to consider the options when planning their next holiday.

For local cyclists, most of the appealing riding is all about the high mountains. The Alps are the centrepiece of this. The same mountain range that created many of the legends of the Tour de France and the Giro d’Italia will provide you with a challenge too if you visit Switzerland. If you’ve ridden up the Col du Galibier or Passo Stelvio – or are dreaming of doing so – you’re gonna love the Swiss Alps! And here’s why, in a totally biased (as much as a Swiss man can deviate from neutrality), and very, very passionate way. 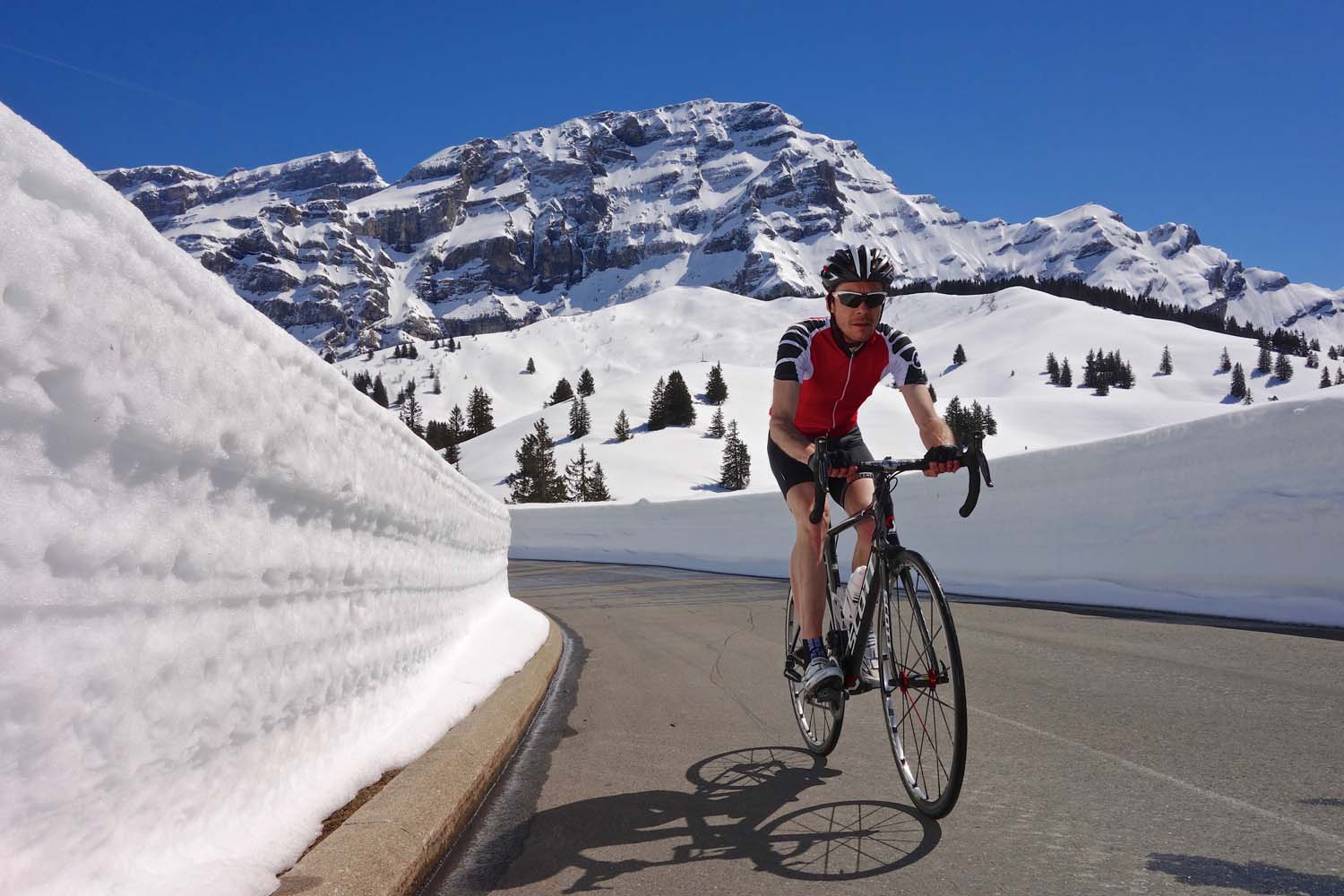 There are officially 16 passes over 2,000m in Switzerland.

The highest one, the Umbrail, is at 2,503m and sits on the border with north-eastern Italy. It is actually the third and lesser known way of climbing the Stelvio. Coming from Santa Maria in Switzerland, you cross the pass, go down 50 metres and connect with the road to Bormio, just a few kilometres from the top of the Stelvio. I highly recommend this route where the traffic is minimal compared to the classic route from Prato which is often saturated with motorbikes, cars and campervans, especially during the summer season.

Andermatt, a small town in central Switzerland, is kind of a mecca for ‘col collectors’.

From this typical Swiss mountain village, it is possible to ride up many of the major Swiss passes: the Oberalp, the Gotthard, the Furka and the Susten are all within 30km. A little bit further away, the Grimsel, the Nufenen and the Lukmanier can also be included in a day ride from Andermatt. Well, not exactly all in one single day.

Even the longest loop of the Alpenbrevet, a summertime Alpine granfondo, only covers five passes… the shorter courses cover the rest. My wife Lillie and I did this amazing event one year; I tackled the monster course (276km with 7,031 metres of climbing) while she and some close friends conquered one of the shorter courses, “only” 172km with 5,294m of climbing. With five courses of varying lengths and difficulty, there is a ride for all levels at this challenging and fun biking event. And in my very biased opinion, this region is a great place to base a cycling holiday. 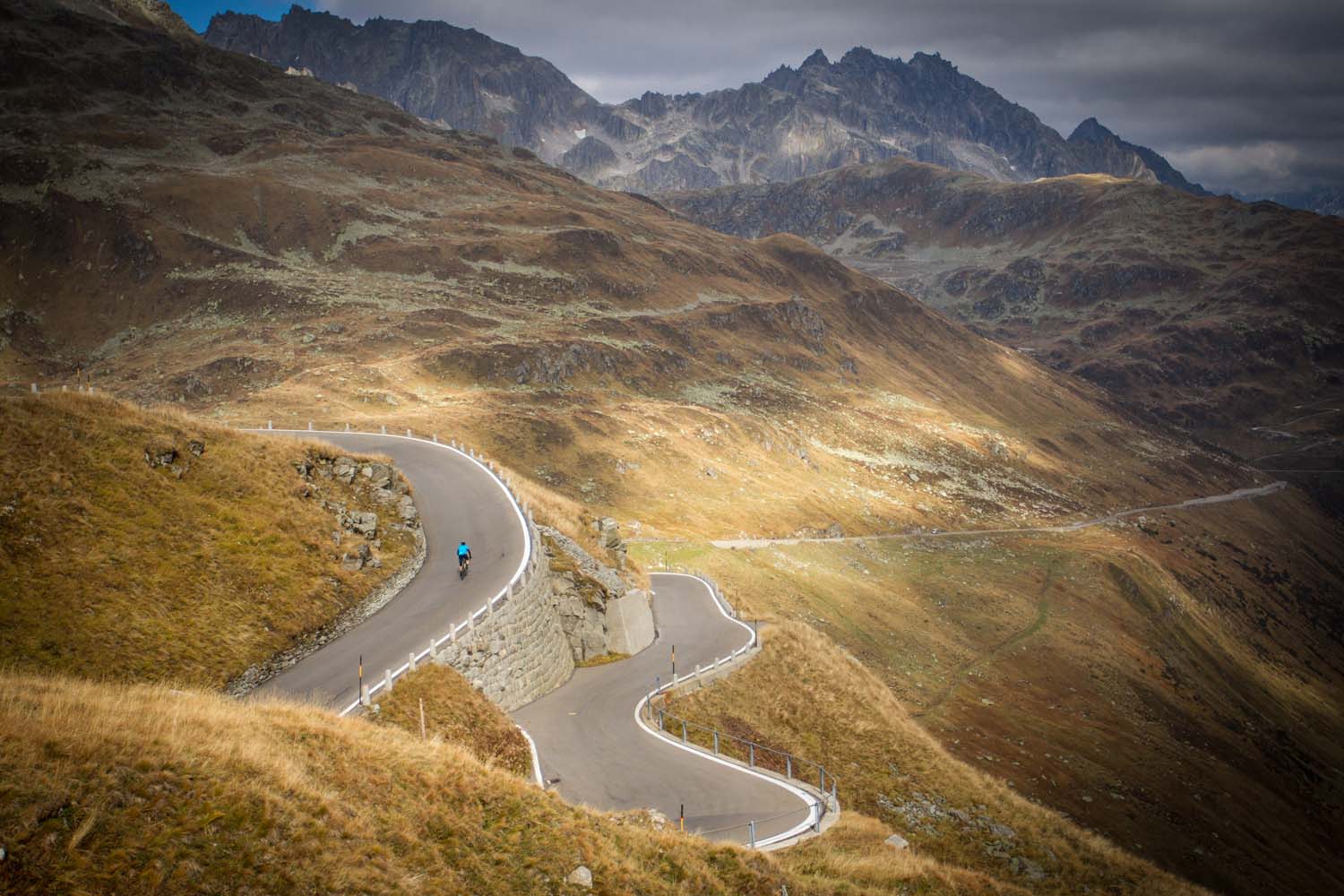 The Furka pass (above), at 2,436m, links Andermatt to the quaint village of Oberwald. Cyclists love the Furka for its big views, proximity to a beautiful glacier, and its many perfectly curved switchbacks. James Bond loves it too: in Goldfinger (1964), he drove over the Furka pass, and as one might expect, there was a car chase. At the top, there’s a sign, ‘James Bond Str’, that commemorates this episode.

The south side of the Gotthard pass is also a must do for any cycling enthusiast. The fourth longest tunnel in the world takes away most of the traffic from its slopes, and what is left of it stays on the main road.

So where do you ride? On an old road that dates back to Roman times, also called the Tremola. And to keep it authentic, the Tremola is still cobbled, a reminder of Roman times and the incredible feat of engineering that was required to create this road.

Fear not, the Tremola cobbles are not like the pavé of Paris-Roubaix… this is Switzerland after all. The road is well maintained and the cobbles are nice, square and mostly smooth. It’s never too steep, so the riding is not hard either – it’s just a little bit slower, and nothing but pure fun. The Tremola also features some incredible sets of switchbacks. 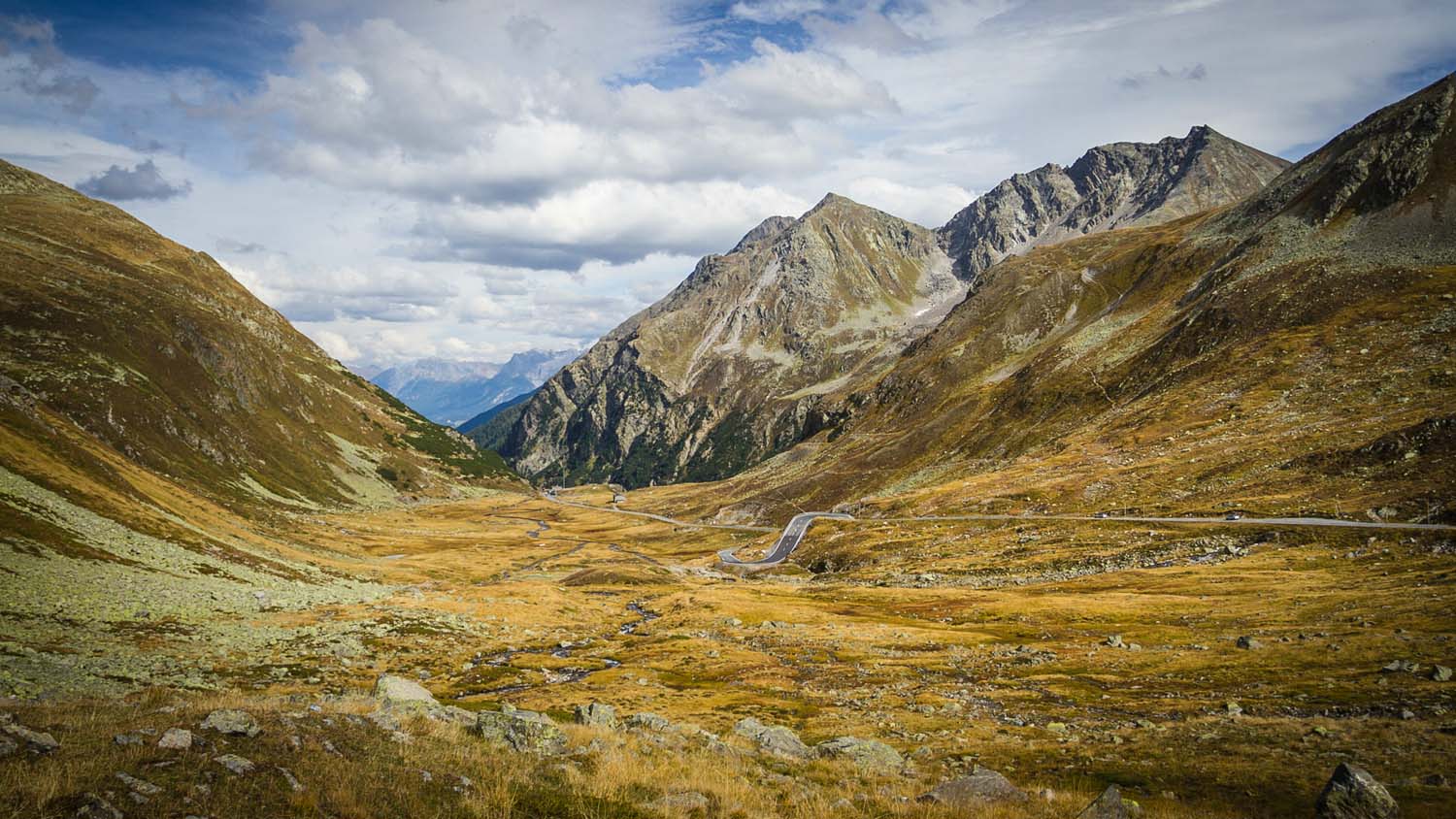 I could go on and on about all the passes in Switzerland, but needless to say, you’ll discover them yourself when you visit. And, as the title of this story suggests, you’ll likely also discover yourself while on the cycling holiday of a lifetime. I will only mention one more big pass: the Col de la Croix in western Switzerland. It’s a very partial choice. At 1,775m, it is not as high as its eastern cousins. But I live on its slopes.

I should hate it. It means that I have to climb at least 700 vertical metres to get home. More than once I crawled up the mountain at the end of a long ride, dreaming of that elusive beer waiting for me in the fridge. But as a bonus, I can ride a HC climb after work. I can eat switchbacks for lunch. My season is one big high altitude training camp.

Also, the base of the Col de la Croix is at 450m. This means that the total elevation is more than 1,300m over 22 kilometres. That’s huge. It compares to some of the hardest climbs in the Alps. The Stelvio and the Col de la Madeleine are slightly longer and harder, but it’s more climbing than the Galibier from Valloire. 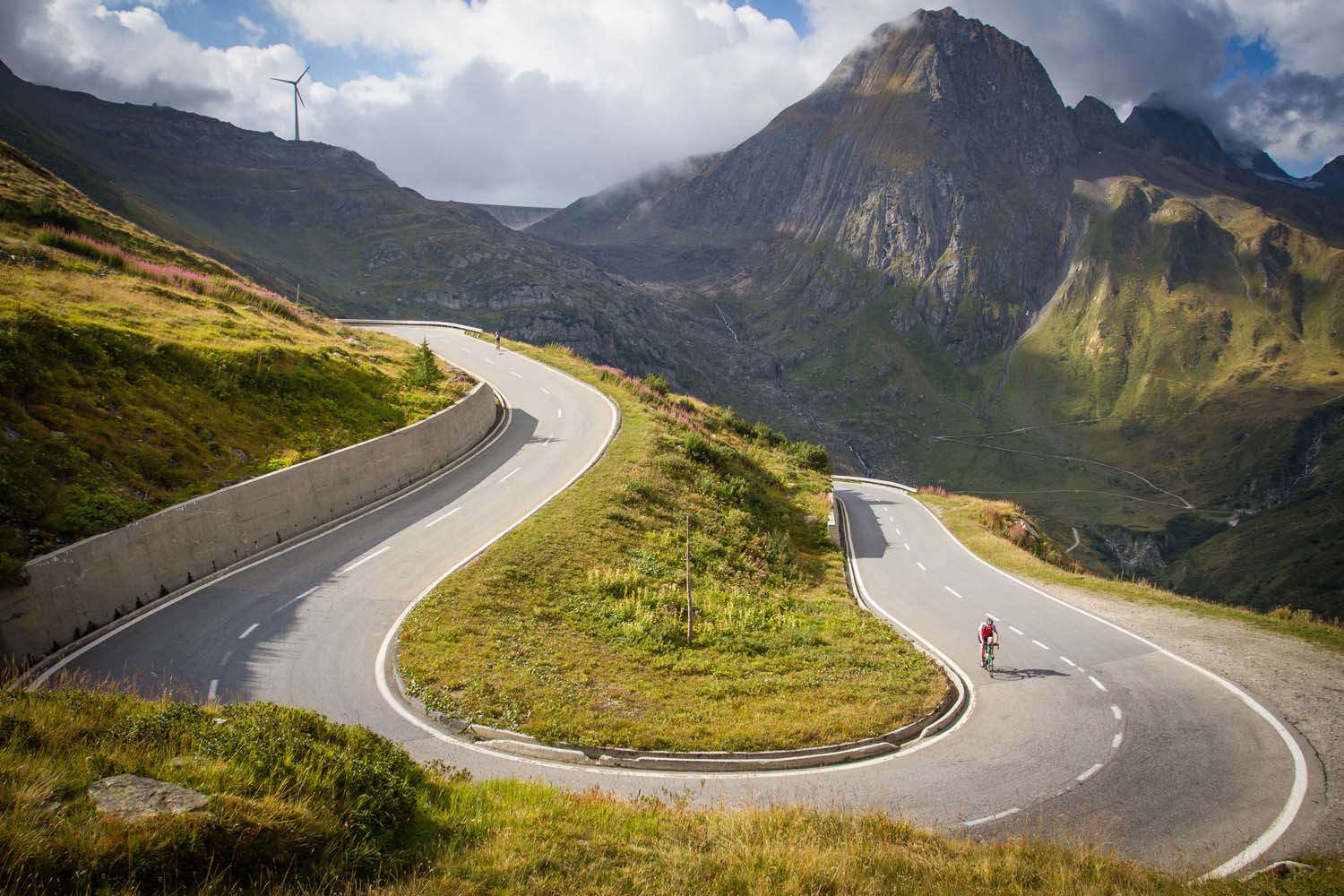 If you want to explore Switzerland, give me a shout. I’d love to show you my backyard. Just don’t forget your 34×28.

I even have a 34×32 so that I can pretend I have a recovery ride from time to time, and Lillie won’t leave the house without her 33×32.

Switzerland is not just special for its endless riding possibilities. It’s also a land of contrast. The country is small: 41,285km2. That’s 186 times smaller than Australia. I even crossed the whole length of Switzerland in one epic, 18-hour 400km bike ride with a group of friends.

But Switzerland is amazingly diverse for such a small country. There are four national languages: German (spoken by 63.5% of the population), French (22.5%), Italian (8.1%) and Romansh (0.5%). And German is actually not the language used at home. Instead, people speak one of many Swiss German dialects. Which means that a Zurich resident may not fully understand somebody from Basel or Bern. Unless they speak to each other in German, which they rarely do. Unless they have to communicate with a Swiss French speaker, like me. Go figure.

The Alpine culture is a stronger common denominator for Switzerland as a nation than language. We all love our mountains and that’s what unites us. You won’t find giant concrete ski resorts. Nature is preserved. While riding, you’ll see lakes, glaciers, and a lots of cows. You’ll feel as if Heidi could show up any time. You may even see her on a bike.

Cheese is also a very Swiss feature. Virtually every valley in the country has its own specialty: Gruyères, Emmental, Vacherin, Appenzeller… all delicious, and I can buy cheese from each one of our local farmers in my local supermarket. Which is a good thing. Cheese fondue is a great treat after a big ride in the mountains.

What about the coffee? After all, this article is supposed to describe the caffeine culture of Switzerland. Well… I’m not going to lie, coffee is pretty average here. France and Germany, our biggest neighbours, are not known as the best coffee nations and they seem to have strongly influenced us in this respect. Only in Ticino will you enjoy a perfect espresso. There’s a reason: it’s the Italian speaking part of Switzerland.

Instead, I would rather speak about the Ovomaltine culture of Switzerland. At first sight, it looks like hot chocolate. But its original formula, only available in Switzerland, contains barley malt, milk powder, cocoa powder, whey protein, egg, yeast and honey. Sounds weird? Next time you are in Switzerland, order an Ovomaltine. You’ll climb Alpine passes like the locals.