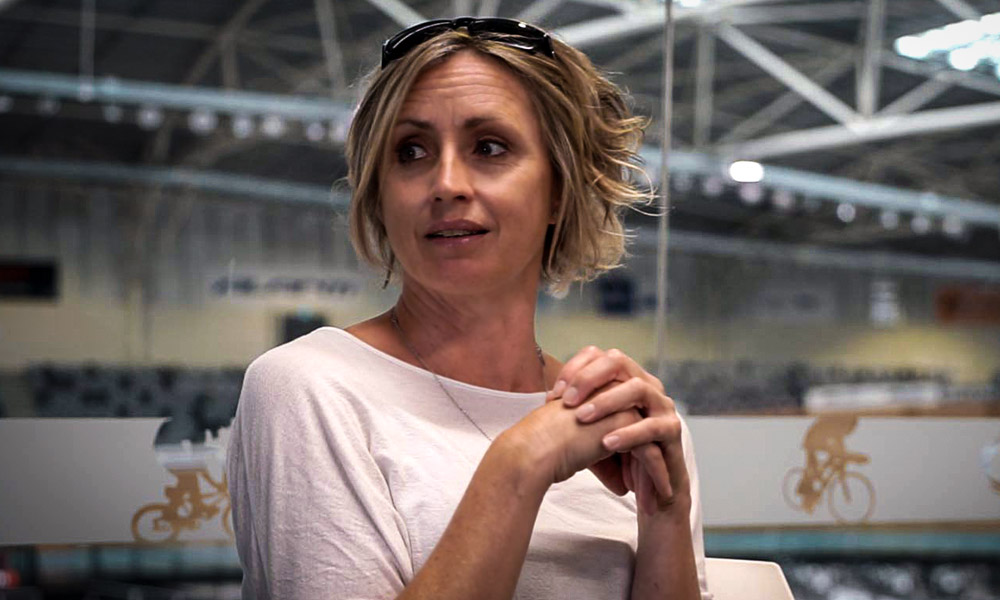 In RIDE Cycling Review #74 there is a summary of a series of YouTube interviews with people associated with cycling. Our discussion with Sarah Ulmer last November offers some interesting insight from one of cycling’s truly interesting personalities.

Ulmer expresses her views in a candid, friendly manner. She has strong opinions but they are never forced on anyone.

You can watch the interview by clicking the link above or, alternatively, listen to the chat on SoundCloud (below).

There are several interviews in the ‘Talking Cycling’ series. The discussion with Sarah Ulmer is well worth listening to as she talks about cycling in various guises and offers some sage words on what could make the sport – or, rather, the very act of bike riding – more accessible to many more people.

Below is a summary of the exchange. 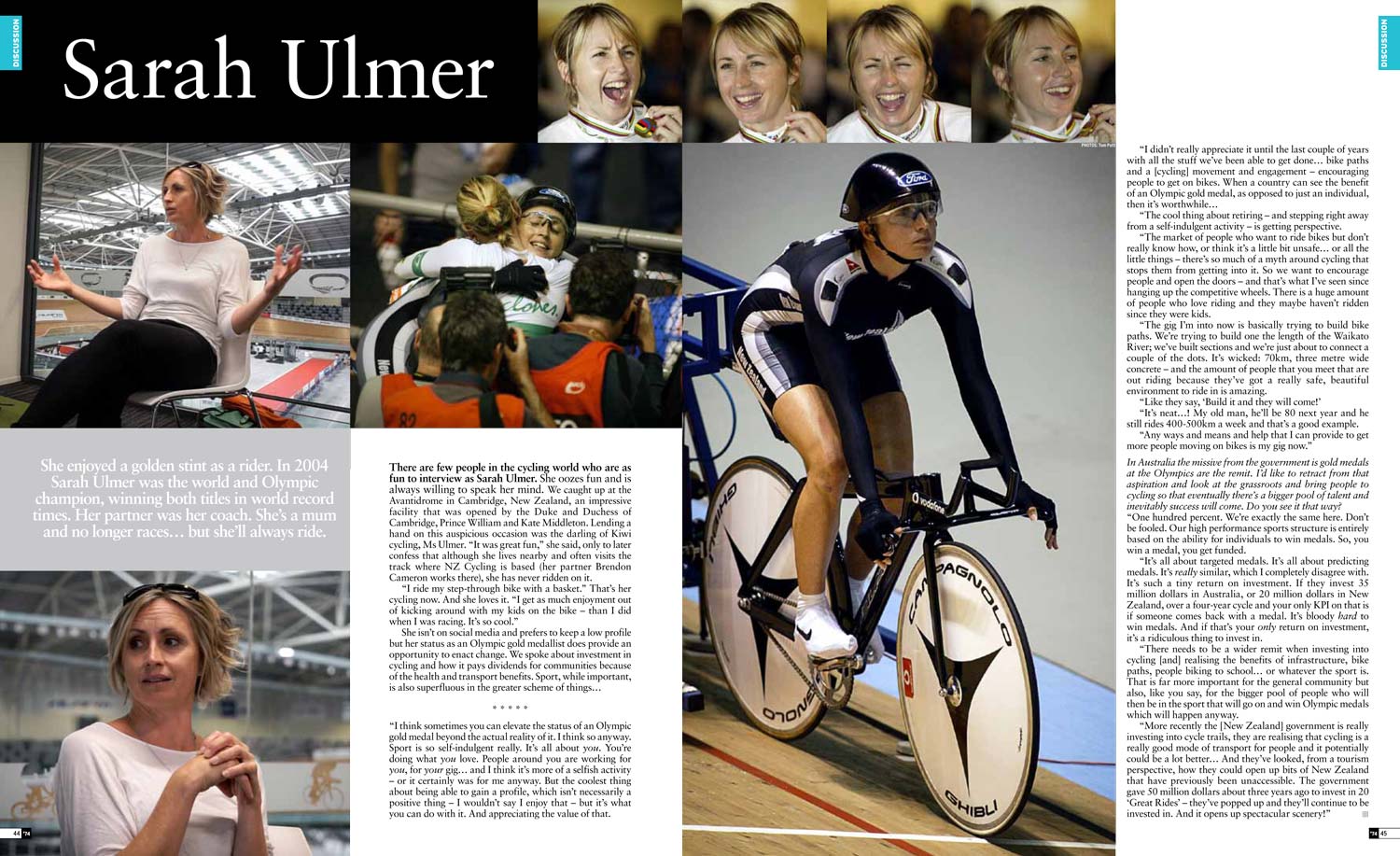 She enjoyed a golden stint as a rider. In 2004 Sarah Ulmer was the world and Olympic champion, winning both titles in world record times. Her partner was her coach. She’s a mum and no longer races… but she’ll always ride.

There are few people in the cycling world who are as fun to interview as Sarah Ulmer. She oozes fun and is  always willing to speak her mind. We caught up at the Avantidrome in Cambridge, New Zealand, an impressive facility that was opened by the Duke and Duchess of Cambridge, Prince William and Kate Middleton. Lending a hand on this auspicious occasion was the darling of Kiwi cycling, Ms Ulmer. “It was great fun,” she said, only to later confess that although she lives nearby and often visits the track where NZ Cycling is based (her partner Brendon Cameron works there), she has never ridden on it.

“I ride my step-through bike with a basket.” That’s her cycling now. And she loves it. “I get as much enjoyment out of kicking around with my kids on the bike – than I did when I was racing. It’s so cool.”

She isn’t on social media and prefers to keep a low profile but her status as an Olympic gold medallist does provide an opportunity to enact change. We spoke about investment in cycling and how it pays dividends for communities because of the health and transport benefits. Sport, while important, is also superfluous in the greater scheme of things… 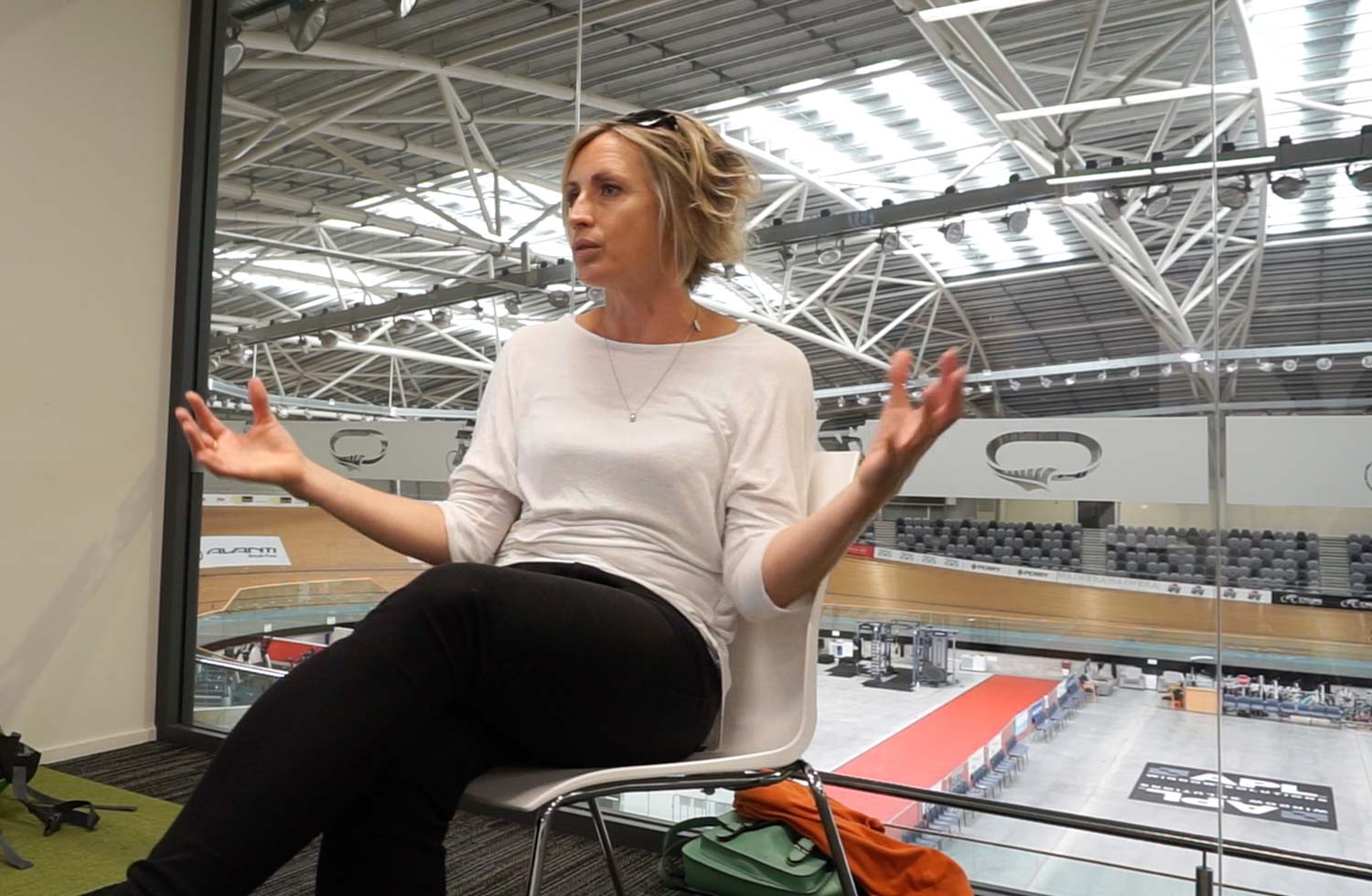 “I think sometimes you can elevate the status of an Olympic gold medal beyond the actual reality of it. I think so anyway. Sport is so self-indulgent really. It’s all about you. You’re doing what you love. People around you are working for you, for your gig… and I think it’s more of a selfish activity – or it certainly was for me anyway. But the coolest thing about being able to gain a profile, which isn’t necessarily a positive thing – I wouldn’t say I enjoy that – but it’s what you can do with it. And appreciating the value of that.

“I didn’t really appreciate it until the last couple of years with all the stuff we’ve been able to get done… bike paths and a [cycling] movement and engagement – encouraging people to get on bikes. When a country can see the benefit of an Olympic gold medal, as opposed to just an individual, then it’s worthwhile…

“The cool thing about retiring – and stepping right away from a self-indulgent activity – is getting perspective.

“The market of people who want to ride bikes but don’t really know how, or think it’s a little bit unsafe… or all the little things – there’s so much of a myth around cycling that stops them from getting into it. So we want to encourage people and open the doors – and that’s what I’ve seen since hanging up the competitive wheels. There is a huge amount of people who love riding and they maybe haven’t ridden since they were kids.

“The gig I’m into now is basically trying to build bike paths. We’re trying to build one the length of the Waikato River; we’ve built sections and we’re just about to connect a couple of the dots. It’s wicked: 70km, three metre wide concrete – and the amount of people that you meet that are out riding because they’ve got a really safe, beautiful environment to ride in is amazing.

“Like they say, ‘Build it and they will come!’

“Any ways and means and help that I can provide to get more people moving on bikes is my gig now.”

In Australia the missive from the government is gold medals at the Olympics are the remit. I’d like to retract from that aspiration and look at the grassroots and bring people to cycling so that eventually there’s a bigger pool of talent and inevitably success will come. Do you see it that way?

“One hundred percent. We’re exactly the same here. Don’t be fooled. Our high performance sports structure is entirely based on the ability for individuals to win medals. So, you win a medal, you get funded.

“It’s all about targeted medals. It’s all about predicting medals. It’s really similar, which I completely disagree with. It’s such a tiny return on investment. If they invest 35 million dollars in Australia, or 20 million dollars in New Zealand, over a four-year cycle and your only KPI on that is if someone comes back with a medal. It’s bloody hard to win medals. And if that’s your only return on investment, it’s a ridiculous thing to invest in.

“There needs to be a wider remit when investing into cycling [and] realising the benefits of infrastructure, bike paths, people biking to school… or whatever the sport is. That is far more important for the general community but also, like you say, for the bigger pool of people who will then be in the sport that will go on and win Olympic medals which will happen anyway.

“More recently the [New Zealand] government is really investing into cycle trails, they are realising that cycling is a really good mode of transport for people and it potentially could be a lot better… And they’ve looked, from a tourism perspective, how they could open up bits of New Zealand that have previously been unaccessible. The government gave 50 million dollars about three years ago to invest in 20 ‘Great Rides’ – they’ve popped up and they’ll continue to be invested in. And it opens up spectacular scenery!”