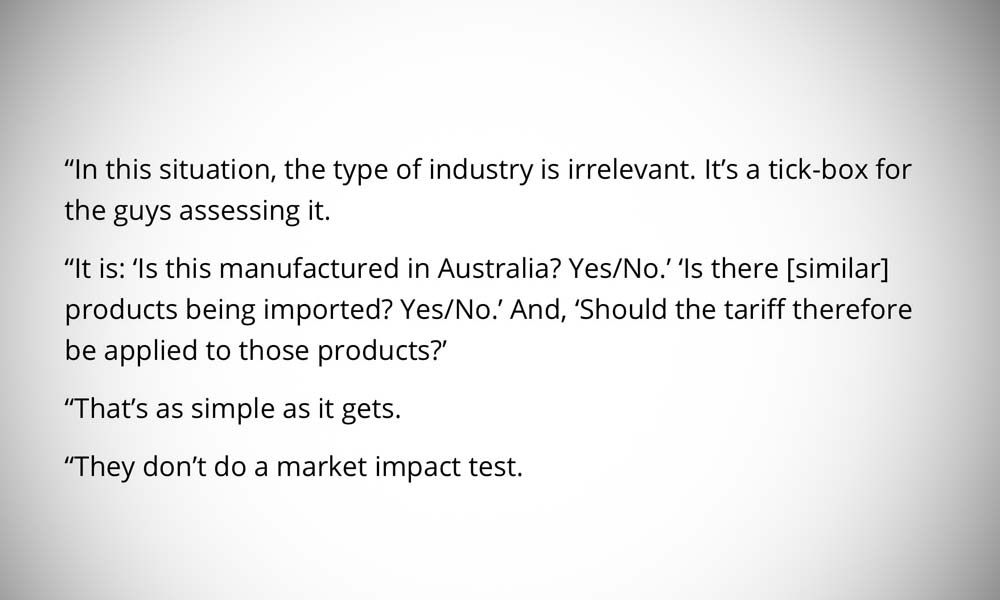 Tariff on e-bikes: “They don’t do a market impact test”

The cycling trade in Australia has suffered a setback early in 2018 with the government opting to impose a tariff on imported e-bikes. Yesterday, RIDE has covered the basics of what, since 2001, had been a tax exemption.

The reaction has been significant and there is a genuine chance that further tariffs affecting not only e-bikes but all bikes will be implemented within two months. Should that happen, the Australian cycling market will suffer.

For now, there’s little that anyone affected can do to lobby government to reconsider the action; it’s little more than a bureaucratic process, a tick of a box, a tariff introduced… and voilà, a huge percentage of bicycle purchases in Australia will be five percent more expensive. More than that, however, is the very real risk that jobs will be lost because of the knock-on effect.

One person who has been monitoring the matter is Peter Bourke of BIA, Bicycle Industries Australia.

RIDE Media spoke with Peter earlier today to try and get a summary of the situation that could prove to be very costly to the cycling market.

Click the link above to listen to RIDE’s interview with BIA’s Peter Bourke.

RIDE: It’s Friday 2 March and I’m talking with Peter Bourke from Bicycle Industries Australia… you’ve had an active week, let’s call it that. What’s going on with the bike trade in Australia at the moment?

Peter Bourke (BIA): “It’s been a very active week with the announcement that all e-bikes imported into Australia (with the exception of those that come from nations that are part of a free trade agreement) will attract a five percent import tariff added to the price of the bikes.”

We covered this yesterday in a piece outlining what’s going on. It’s an action that’s been [instigated] by Stealth Bikes; that’s right isn’t it?

“Correct. Stealth Bikes out of Melbourne has decided that, to help their business, they’ve applied to have the exemption to the tariff removed – and so now they’re the only ones in Australia that don’t have the five percent import tariff.”

We need to do a little bit of an overview of e-bike regulations; so, the Stealth Bikes – you can buy [them] but you can’t use them on anything but private property… is that pretty much a summary of the situation?

“Yeah… their main sellers are the 5,200 watt bike and the legislation in Australia is 250 watts to legally use it on roads and in National Parks and public spaces.

“So, [Stealth’s] main sellers, without a doubt, are not legal to use on Australian roads.”

Each state has legislation regarding the use of e-bikes. 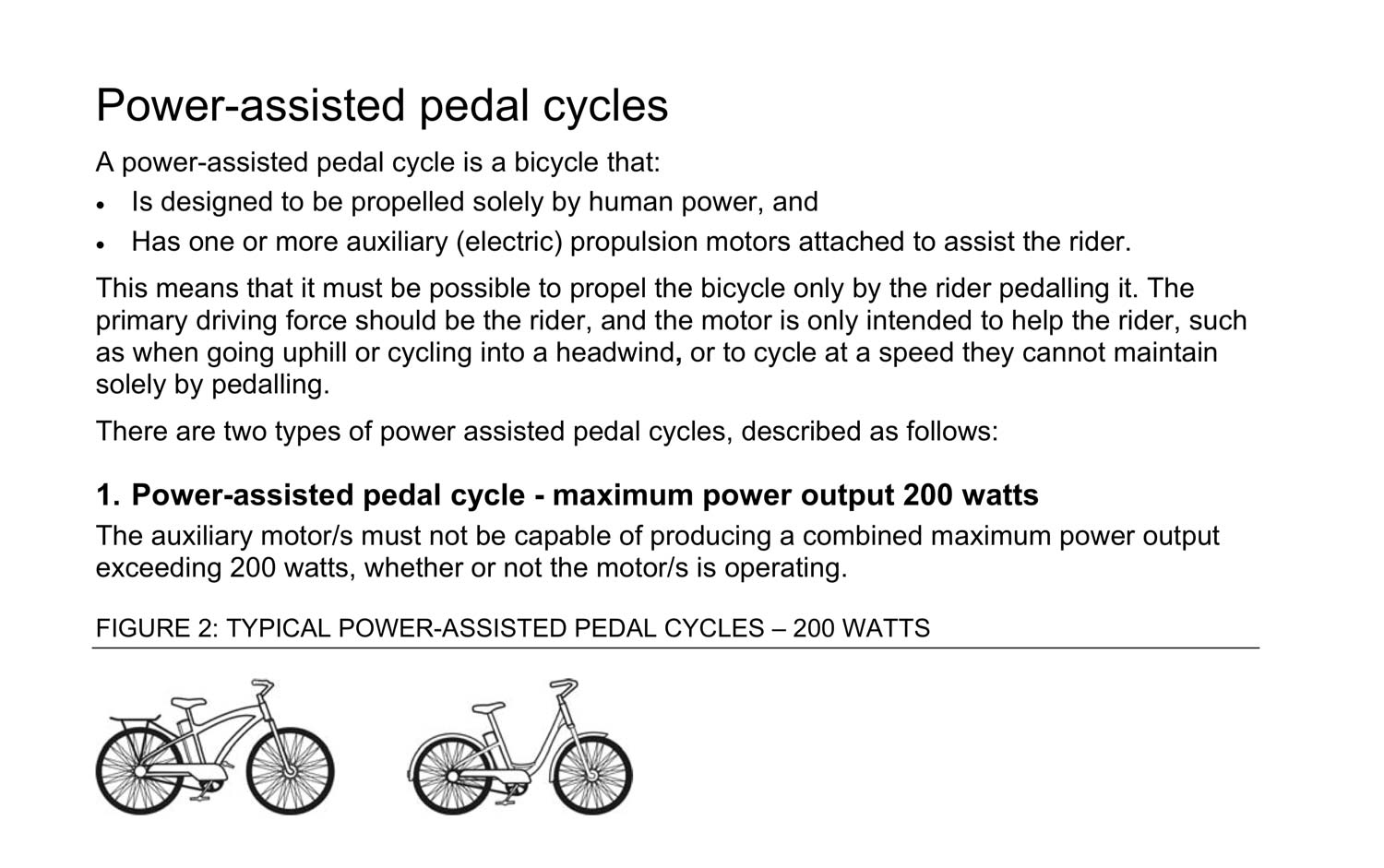 There is hope that common sense will prevail but it is an anxious time for the Australian cycling market.

But their action has imposed a five percent tariff on some bikes, not all bikes… they claim that they’re helping the industry because they’ve employed a person to manage their project. Is that right?

“It’s not quite that wording but they are claiming this as a ‘win for Australian manufacturing’ and ‘Australian jobs…’ because Stealth is made in Australia. So, that is the approach they’ve taken to promote the reason for them going down this path.”

Do you think that that would cost jobs elsewhere?

“We think that it will because everybody that has to pay this five percent tariff will be passing on the fees.

“It will make bikes more expensive at the retailer end, so there is a distinct possibility that it will add to jobs in the bike industry being lost.”

There’s a larger ramification because this could influence how traditional pushbikes are sold in Australia, is that right?

“There is a second application for exemptions – for more tariffs.

“[There is a] second application that is due to be ruled on in about two weeks and that is on all bikes being imported into Australia.

“If that’s the case, every bike will be subject to a five percent tariff. But, I must add: if it comes out of a country like China, [which] we have a free trade agreement with, it won’t actually have that tariff.

“So, it’s not every bike but it is a lot of bikes in Australia that will be affected by this.”

You’ve learned a lot about tariffs in the last few days, I would imagine. Just talk me through the process of applying for the exemption of the tariff – or, rather, the reintroduction of a tariff… how does all of that work?

“There’s been a tariff on bikes for years but in 2001 there was an exemption added. So, since 2001 we haven’t had the tariff on e-bikes, and this was simply an application to rewind that exemption.

“The way it works is: Stealth has identified themselves as an Australian manufacturer of product; they’ve identified the tariff that’s appropriate to products like theirs… and they’ve said that ‘our product is similar to others that are being imported, therefore we should be looked after by the Australian government’ and any product that comes in like ours shouldn’t get an exemption and should be attracting the five percent tariff.

“And that is pretty much as simple as the process goes.”

…in other words: the government really doesn’t care too much about trying to foster the cycling industry.

“In this situation, the type of industry is irrelevant. It’s a tick-box for the guys assessing it.

“It is: ‘Is this manufactured in Australia? Yes/No.’ ‘Is there [similar] products being imported? Yes/No.’ And, ‘Should the tariff therefore be applied to those products?’

“That’s as simple as it gets.

“They don’t do a market impact test.

“The reality is, Stealth could sell one bike in Australia and they’ll impact the other 1.2 million bikes coming in.”

So you, as a lobbyist for the cycling industry: what’s the next step for you? How can you try and placate this situation?

“Previously it’s just been a blanket tariff, which is ‘any power assisted bicycle’. Now we’re trying to separate them out into what Stealth sells, which is a 3,500-5,000 watt bikes, and we’re trying to have a separate tariff allocation for the 250 watt and below.

“If that’s the case, most of the bikes coming into Australia will then be exempt again. But, of course, this will be a four-month process because it’s a new application.

“It’ll be a challenging process but hopefully by about June we’ll be able to say that e-bikes are no longer subject to the tariff.”

This affects those in the industry… cycling media, as well as bike shop owners, and wholesalers, and distributors, and a whole raft of people. What’s the best process that we could all gather together to do to try and negate this action that’s going for the general bike trade? Or even the e-bike trade?

“This is e-bikes but we do believe it’s going to be all bikes.

“In reality this does affect everybody. It doesn’t matter if it’s the big multi-nationals, [or] the small e-bike importers that bring in 50 bikes a year, to the retailer who sells two e-bikes a year, to the others that sell a lot more. It will affect everybody and, of course, anybody in the media knows that once the bike industry is affected, they’ve got to cut costs somewhere…

“What we’ve found is that, in the short-term, it’s the wholesalers that are affected, so we’re doing a lot of work with those guys. And they are supporting me in providing lots of information for our tariff application.

“The retailers? The reality is for the consumers to understand that the retailers and the industry and not gouging at all.

“This is a government-imposed tax that we have no say over whatsoever.

“And, unfortunately, five percent is something the industry cannot absorb and they’re going to have to put prices up.

“In reality it is something that consumers and the community have to understand … the industry is trying to do something about it but in reality we can’t.

“At this stage it is a wait-and-see process.

“Once we know what’s going to happen, we may do a public campaign where we need the consumers to talk to their local politicians. At this stage, we’re going through the formal process without doing the political lobbying.

“There may be a time when we put our hands up and say, ‘Can you please help us? Talk to your local member and say: what is going on here? Why are you hurting people who are trying to ride bikes?’

“Right now we’re not ready for that, but that may come in a couple of months.”

Well it’s a watch-this-space scenario so we’ll watch this space and we wish you all the best in the next little while and hopefully a bit of common sense will prevail.