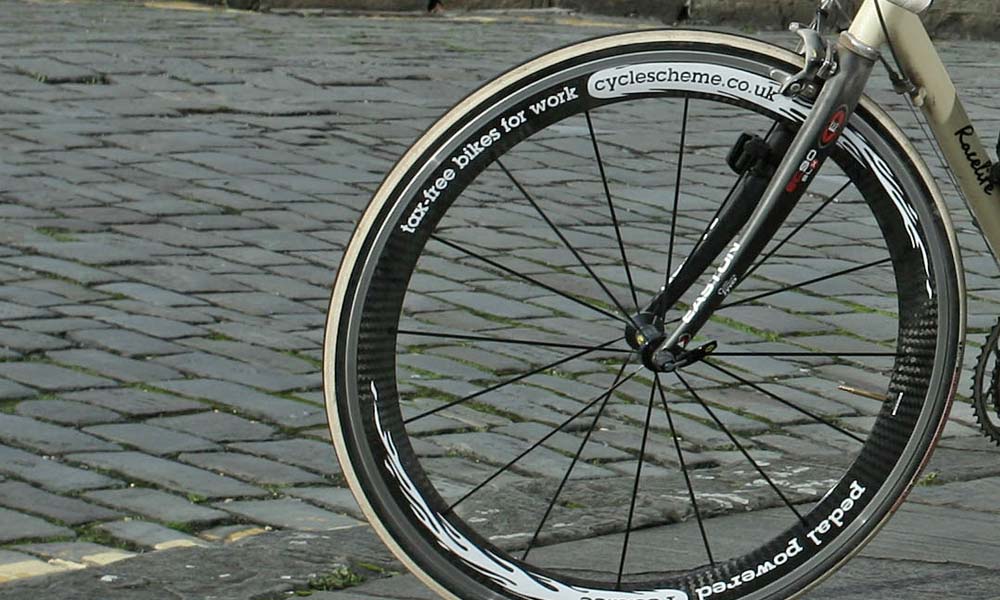 How tax concessions can help cycling

In 2010, government policy in the UK helped give the cycling industry some momentum. There were tax concessions for cyclists and the market flourished.

Last week we reported on the Australian government’s action that led to imposing a tariff on imported e-bikes and how there is now an application for a tariff on general bicycle imports from countries that do are not part of a free trade agreement.

Instead of hindering the bike trade, it would be possible for the government to assist it and encourage the use of cycling in the Australian community.

Cycling in the UK has flourished in recent times. The uptake of bike riding has been significant and the benefits have been passed on to the wider community: less congestion on the roads and, one would hope, a healthy society. Furthermore, there has been growth in membership of the national federation and a broader acceptance of cyclists over the years.

– Here is a flashback to a feature from #RIDE48, published in April 2010, about some tax incentives granted by the UK government at the time. –

As the Australian government stimulates the economy (in 2010) with building grants and promises of better home insulation, (in 2010) British cyclists are enjoying benefits of a clever tax incentive…

You want a new bike. You look at a few, read some reviews, talk to a bunch of buddies, visit a couple of shops. You pick one out, you take it for a test ride, you make up your mind. What next? Hand over the readies to the friendly shopkeeper? Truffle across the net in an effort to save a few cents for the best deal? Or would you like to ride it away now, pay nothing for six weeks, save 40 per cent off the shop price and spread your reduced payments over 12 carefree months?

Sounds too good to be true, but that’s exactly what huge swathes of cyclists in the United Kingdom [were] doing [in 2010].

Thanks to Gordon Brown and Her Majesty’s Revenue and Customs, tax breaks to encourage more people to venture onto Britain’s roads are transforming the way Poms get rolling.

“We’re a road specialist; for the guys basing their business around city commuter hybrids, it’s an even higher percentage.”

Bruce, a Kiwi émigré, opened the doors of Prologue in 2007. “Back then, you’d get the odd customer asking, ‘Do you do Cyclescheme?’ with more hope than expectation. Nowadays they don’t even ask. More often than not, you get to the till and out comes the magic voucher.”

So how does the scheme work?

The legislation [had, in 2010] been around for a few years, instigated by Gordon Brown when he was running the economy for Tony Blair.

Similar ‘salary sacrifice’ plans were put in place for home computers and childcare vouchers, grabbing more headlines at the time. But it is the two-wheeled version that’s making waves now.

Pressure from employees and a growing realisation amongst employers that there was nothing to fear from running a cycle-to-work scheme led to a huge increase in companies making the benefit available to staff.

Retail chain Evans Cycles launched their in-house program Ride2Work to take advantage of the breaks in 2005.

Evans’ Tom Kirkman has noticed a sea-change in attitudes since that time: “There was a huge amount of reluctance to initialise a scheme. HR people presumed the whole thing would be a nightmare of paperwork and red tape. It wasn’t until would-be cyclists started camping out in HR departments and asking ‘Why not?’ that they were dragged kicking and screaming into making cycle-to-work schemes available.”

It’s a different story now, as Tom attests. “Lo and behold, there was very little work involved for the HR people or payroll departments.

“It cost them nothing, as they get all their initial cash back from the cyclist.

“All of a sudden, in straitened times, companies have realised that they can offer a decent benefit to staff without raiding the coffers.”

The knock-on effect has been huge and nowhere more so than London: the capital has seen an increase of 91 per cent in journeys by bike in the last decade.

While the effects of hosting the Grand Départ of the Tour de France in 2007, British Olympic success on the track and ‘Cav’ and Wiggins’ Tour successes have all played a part in raising the profile of cycling, the practical impact of cycle-to-work schemes is easily recognisable as a huge influence on those figures. 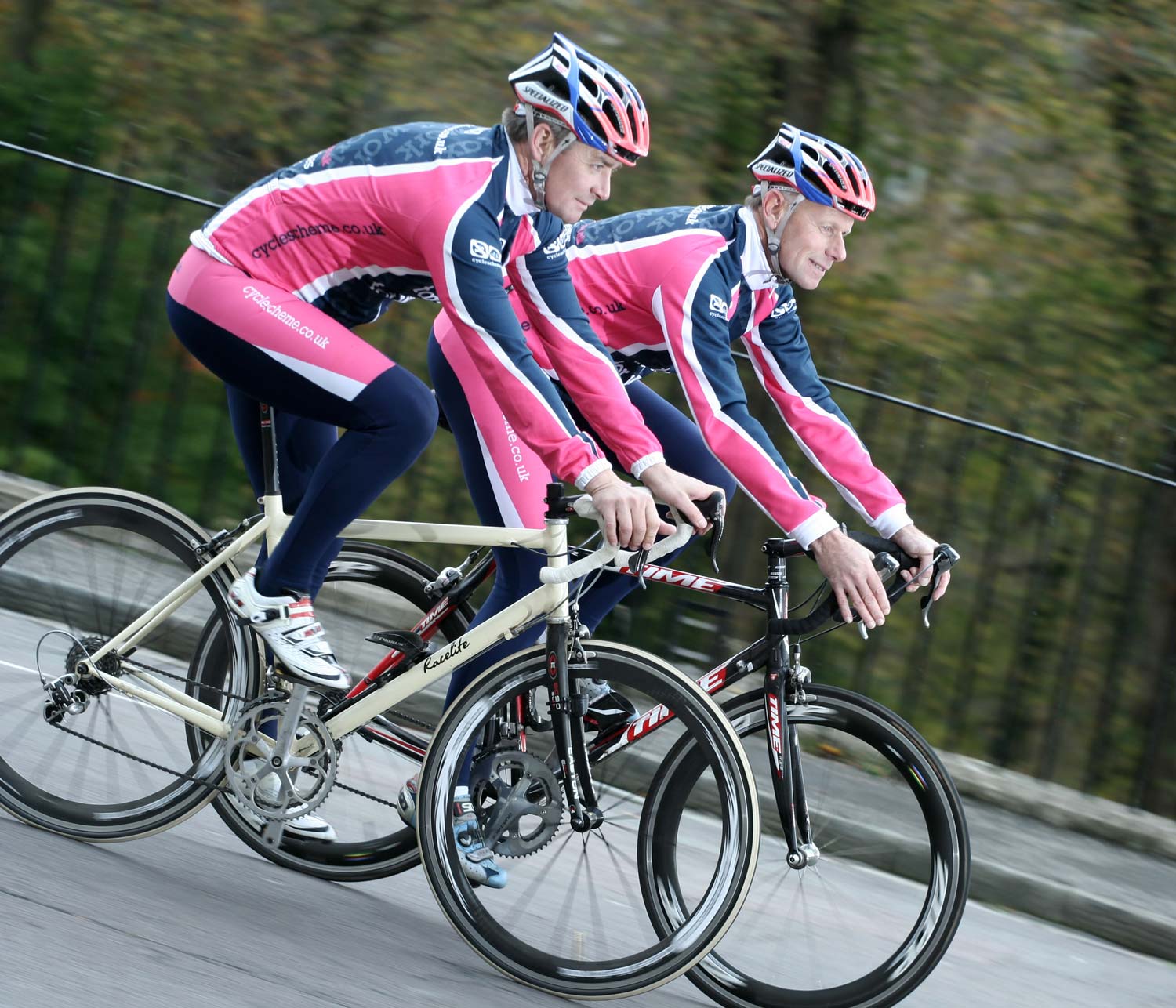 Riding on tax benefits… Richard Grigsby and Gary Cooper (above) are the men behind Cyclescheme, a company built largely thanks to the advantages of legislation that the British government introduced years ago, providing tangible cash incentives for people to buy bikes. The result since the scheme’s introduction is an increase in journeys made by bike — reducing carbon emissions and congestion, while helping participants get fit.

“I always fancied riding a bike to work,” says London commuter Jess Ellis, “but it’s a big lump to shell out. The cycle-to-work scheme was the push I needed.”

While it’s clearly people like Jess who are the target of the government’s thinking on the tax breaks, cyclists everywhere are benefiting.

“I bought a Bianchi road bike by salary sacrifice last year,” says Dorset solicitor Becky Mack, “and as soon as my 12 months were up I went straight out and got a Cube mountain bike. Do I ride to work? Well, yeah, but it’s about five minutes away. Of the miles I rack up, 90 per cent take me anywhere but work.”

So, who is the typical cycle-to-work customer? We spoke to Richard Grigsby of Cyclescheme, the UK’s biggest cycle-to-work facilitator.

“A quarter of all people taking up Cyclescheme are women, which is a far bigger slice than out on the general market,” says Richard.

“More than half of all the schemes we’re setting up are going to people who are new to cycling to work.”

New cyclists then would appear to be the answer. And though there are plenty of road bikes leaving shops under cycle-to-work schemes, the real bulk of sales is accounted for by hybrids and city commuter machines. 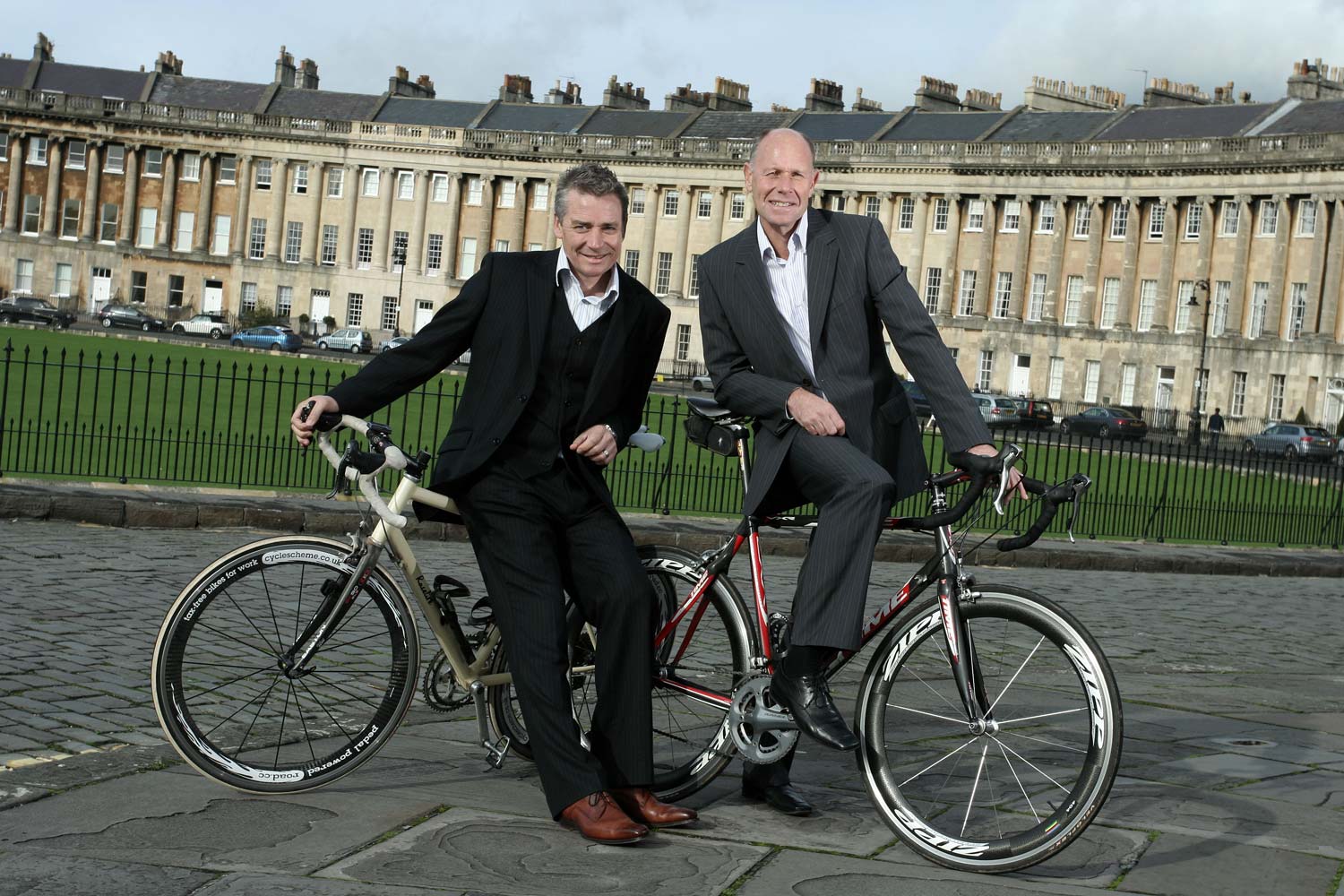 The cycling industry enjoyed growth in the UK because of the incentives offered by government policy. Cyclescheme was established by Grigsby and Cooper (above) in 2004. In 2018 the site boasts “715,495 satisfied Cyclescheme customers and counting”.

Cyclescheme is the bright, shining face of the resurgent bike industry in the UK. Founders Richard Grigsby and Gary Cooper were the type of retailers who were always looking to do a bit more than just wait for the next customer to walk through the door. From their Bath retailer, Avon Valley Cyclery, they had already set up a folding bike brand, when an enquiry came in from a local employer about a cycle-to-work scheme. This was in 2004, when there was little understanding of the legislation.

The only supplier in the field of note was Halfords, the car accessories and budget bike giant, which used its network of stores to deliver a workable offering to companies.

“We were speaking to Bath University about the possibility of operating a scheme for them, and they responded that they would like to do something, but not via just one bike shop,” remembers Richard.

“We said, ‘That’s okay, we’ve got nine other bike shops willing to work with us,’ and that got the ball rolling.”

The university’s 3,500 staff began to see the benefit and all of a sudden Richard and Gary had a network of retailers. Less than six years later they have 1,400 bike retailers working with them and 100,000 bikes trundling the streets of Britain. (Note: that number has grown to over 700,000 in 2018.)

Cyclescheme, as they branded themselves in 2004, is now sitting pretty having been crowned Britain’s fastest growing company by the Sunday Times Fast Track 100. 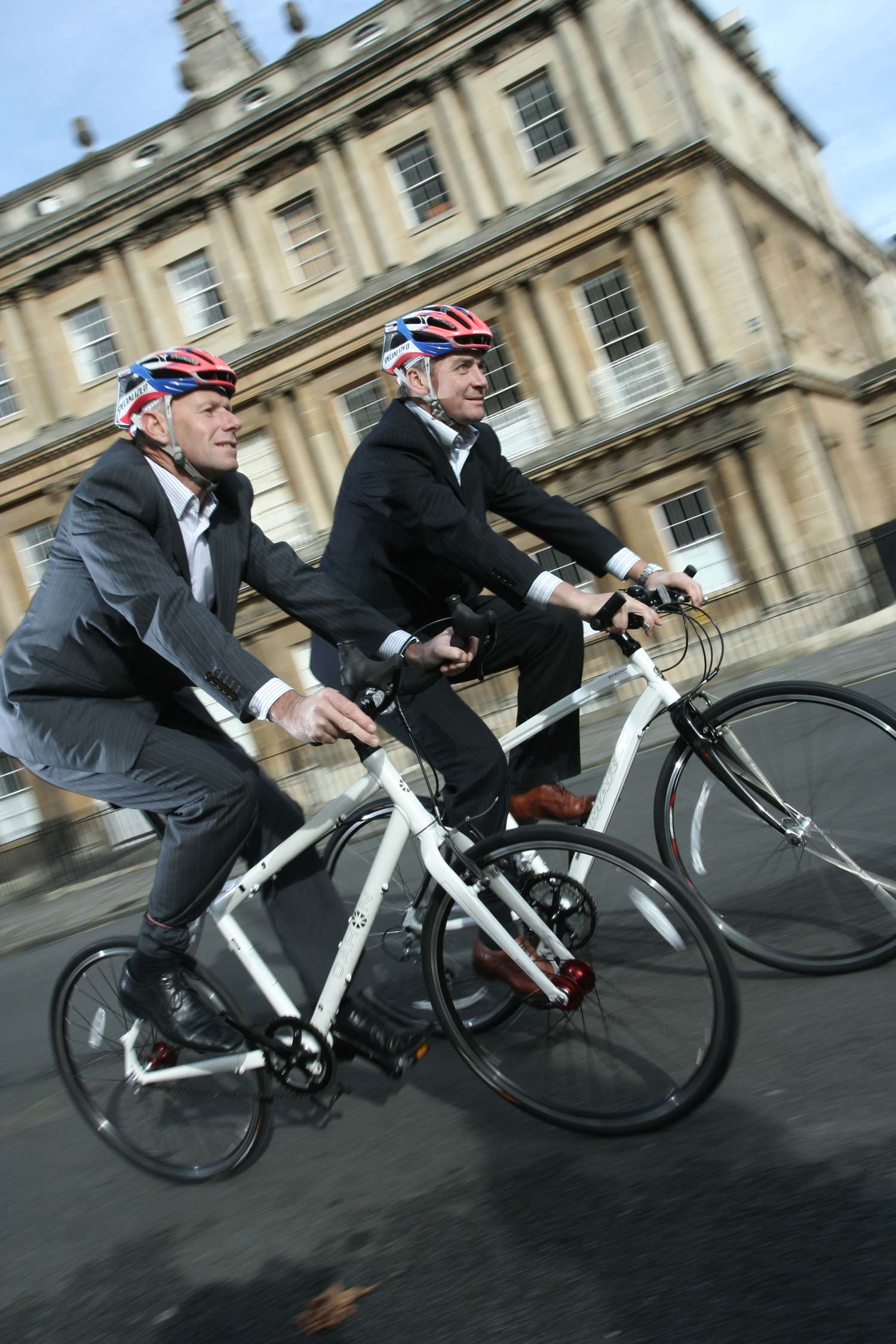 This article was originally published in April 2010 (#RIDE48). 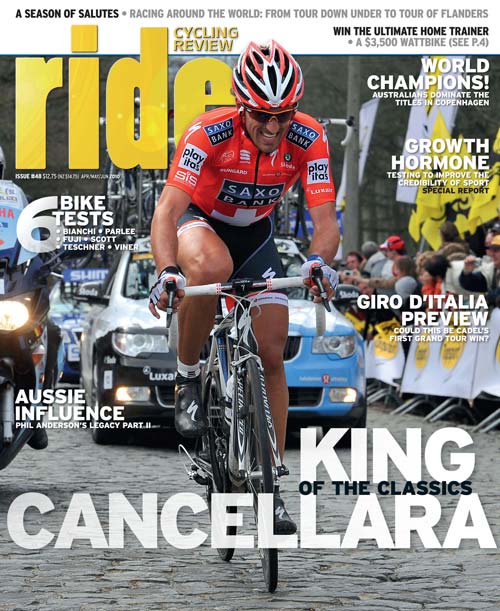 Cyclescheme says it’s already talking to the Urban Renaissance Agency in Japan and is always interested in speaking to people overseas about doing something similar.

To make the picture even more rosy, the government recently announced ‘The Cycle to Work Guarantee’, sanctioning existing schemes and providing a much-needed template for larger employers to set up future programs.

Is there no end to this boom? Tom Kirkman adds a note of caution: “The Home Computer Initiative was also run through a tax-efficient salary sacrifice and that was withdrawn eventually, largely because of people abusing the spirit of the scheme.

“The industry is working hard to present a united front and work in partnership with the taxman to ensure we’re seen as trustworthy and law-abiding. Nobody knows what’s around the corner but, touch wood, it’s a very good situation at the moment for everyone concerned.”

Bikes that are easier to pay for. More bikes. More people on bikes. Can’t be bad, can it?