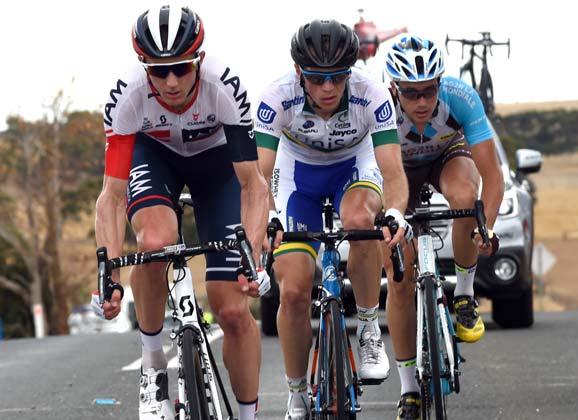 We continue the overview of rider files of stages from this year’s Tour Down Under. Pat Shaw is the subject of stage four after the 29-year-old from the UniSA team put himself in the escape group of stage four… 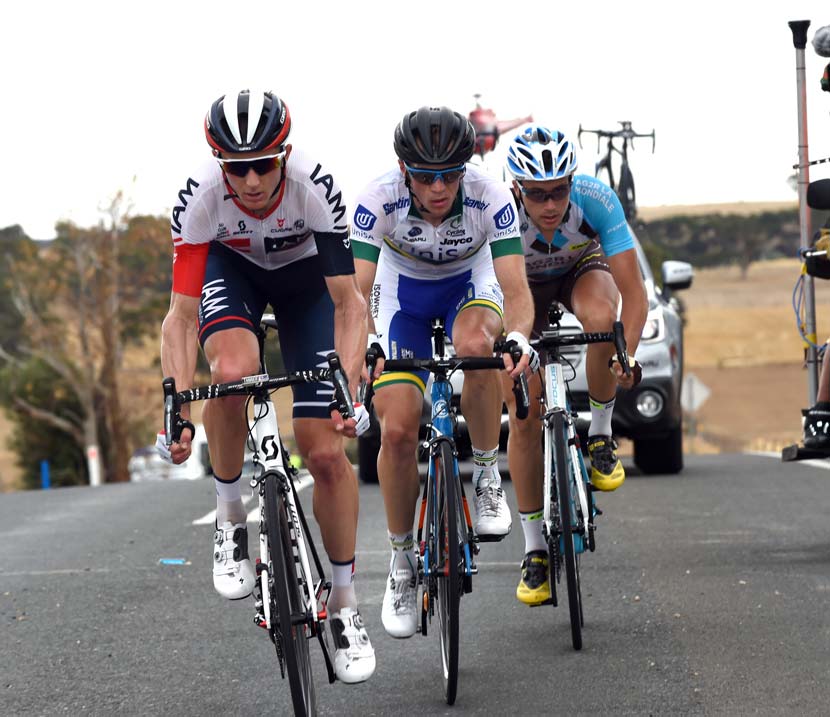 Stage four of the Santos Tour Down Under was a day when a break could possibly be let go and get up the road. With three hard days of racing under the rider’s belts, a small group containing riders who might have already lost a little time on GC could possibly be allowed to escape.

Strategically, with sprint points available at 27.6km, Orica were not going to allow any moves to go early, so the initial pace up Norton summit was… let’s say a little solid! Pat Shaw and Sean Lake from UniSA were both tasked with trying to get in the break on stage four, but with such a tempo being ridden on the front, the riders first had to hang on and make it over Norton Summit.

We’re using a range of graphical tools from Today’s Plan to analyse data from stage four. The first graph in this analysis is the ride file from Pat Shaw.

The stage has been broken down into the main parts from Pat’s perspective and with the use of a few more of the fantastic analysis tools within Today’s Plan, we will again look at how the opportunistic Pat Shaw made the main break of the day, on a day when many tried and failed. 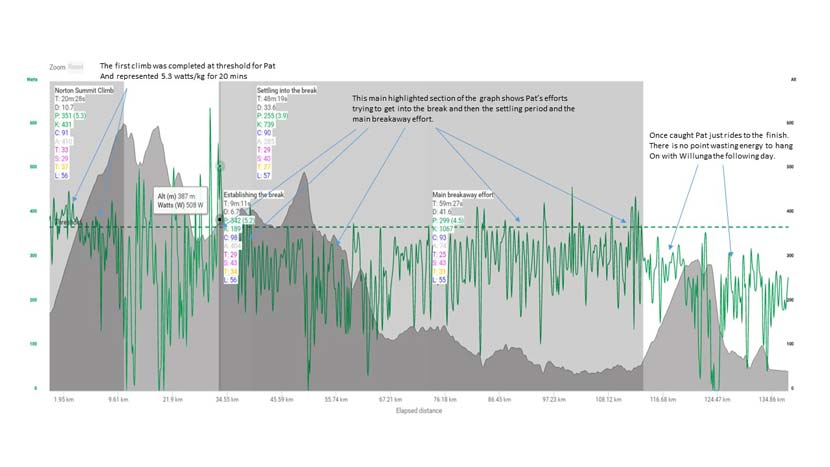 With many riders trying to make the move it was very difficult to get correctly positioned. Pat is a master of this and after 2 separate attacks he managed to slip away and the move established. Pat hit three main efforts up to 900 watts to get away and then held 342 watts for nine minutes to roll turns with his fellow breakaway riders. After this the peloton sat up and allowed the move to go, Pat and co aware of this eased away and steadily built a lead. This effort had an adjusted power of 275 watts (4.2 watts/kg).

After this, the peloton started to chase requiring Pat and the other 2 breakaway riders to lift the pace.

The final 60 minute effort before they were caught was completed at 312 watts adjusted (4.7 watts/kg) with an average speed of 41.8km/h. The guys were pulling solid turns and leaving it all on the road.

In these next two charts, we look at Pat’s power distribution and Power/Cadence scatter graph. These charts look at the time spent at each power output (below) and also the relationship between cadence and power.

In this chart each point represents a data point.

You can see that Pat maintained a relatively tight spread of cadence and power with just a few outlying data points when the attacks and efforts were made. This is a normal pattern for a rider holding a steady power output.

In the next set of charts we can see the time spent in each power zone as well as Pat’s right/left power balance derived from his Pioneer power meter. You can see that Pat spent a large amount of time at or above threshold. This shows that to ride at this level, one of the limiting factors is the ability to repeatedly hit efforts around VO2 and Anaerobic intensity and not just ride at a steady tempo or threshold pace. 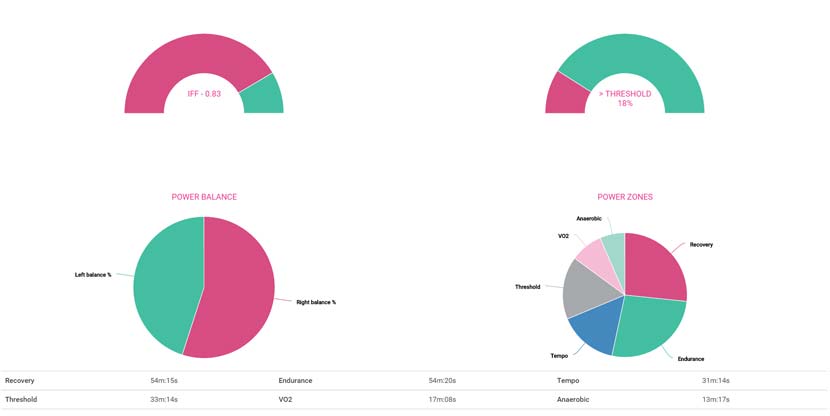 In the last chart we are looking at Pat’s peak power curve. Today’s ride (maroon power curve) by Pat was impressive and you can see that he hit either PB or very close to PB powers from six minutes to 30 minutes all this after three hard days of racing!

In the end the break was caught, but Pat Shaw in his first TDU showed why he had earned his spot in the UniSA team. He rode strongly, proudly flying the green-and-gold national colours in the break!