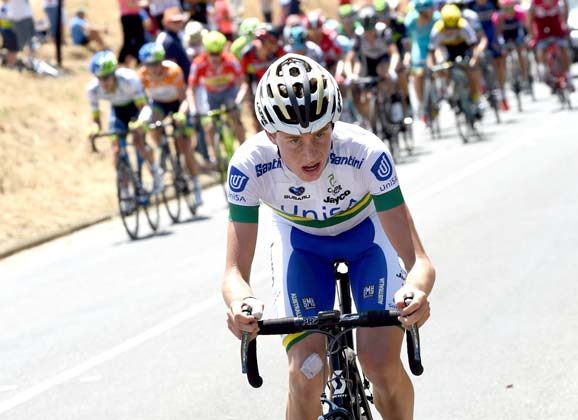 This is the final instalment of Mark Fenner’s commentary on the power data of riders from the UniSA team at the Tour Down Under. The coach considers the file submitted by Chris Hamilton. The under-23 national champion had an impressive ride although it was another Hamilton, Lucas (same surname, no relation), the youngest rider in the opening round to the 2016 WorldTour who showed himself more than Chris.

Stage five is considered the ‘Queen Stage’ of the Tour Down Under and it features two ascents of Old Willunga Hill. There are usually a series of attacks – and the 2016 race went according to script. Lucas was one of the aggressors but Chris and others from the UniSA team had to ensure that he was positioned for the move. 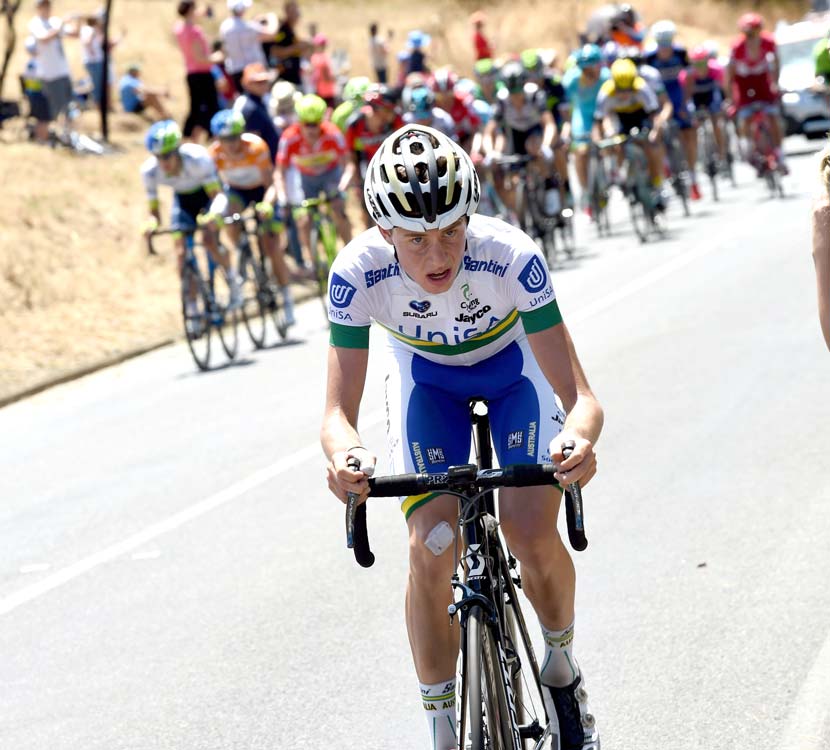 Lucas Hamilton leaves the peloton behind with a rapid surge on the second ascent of Old WIllunga Hill on the Saturday of the 2016 Tour Down Under.
Photo: Graham Watson

Chris Hamilton: powering up a climb

The Santos Tour Down Under has a special day and it ends on top of the famous Old Willunga Hill. The plan of attack for the UniSA team was to make sure the young climbers Chris and Lucas Hamilton were positioned well and had the best possible chance of performing on the famous climb.

In this analysis we are just going to look at Chris Hamilton’s two climbs up the famous Willunga Hill.

Using the Ride Graph we are going to compare the two efforts alongside each other and compare when the hammer went down on the final ascent ‘The Hurricane’ was nearly good enough to match it with some of the best climbers in the world.

In this first Ride Graph we look at the entire race with a detailed breakdown of the specific climbs of Old Willunga Hill. 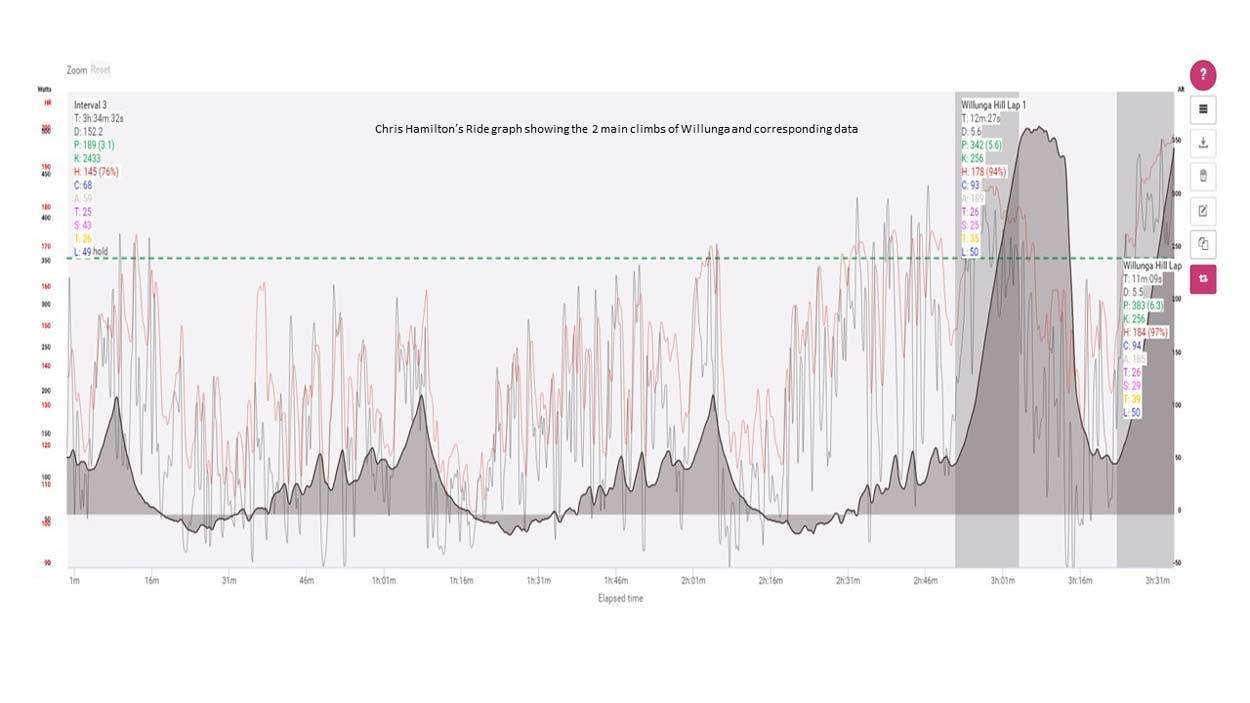 The first climb up Willunga was ridden hard and fast as the peloton looked to reel in the breakaway.

Again the lead into the base of the climb was critical for positioning as when the tempo is hard on the climb moving up the bunch is very difficult. Chris was looked after by both Steele von Hoff and Pat Shaw and was positioned very well up towards the front of the bunch.

In this next graph we are looking at the first climb of Willunga in a zoomed segment (below). 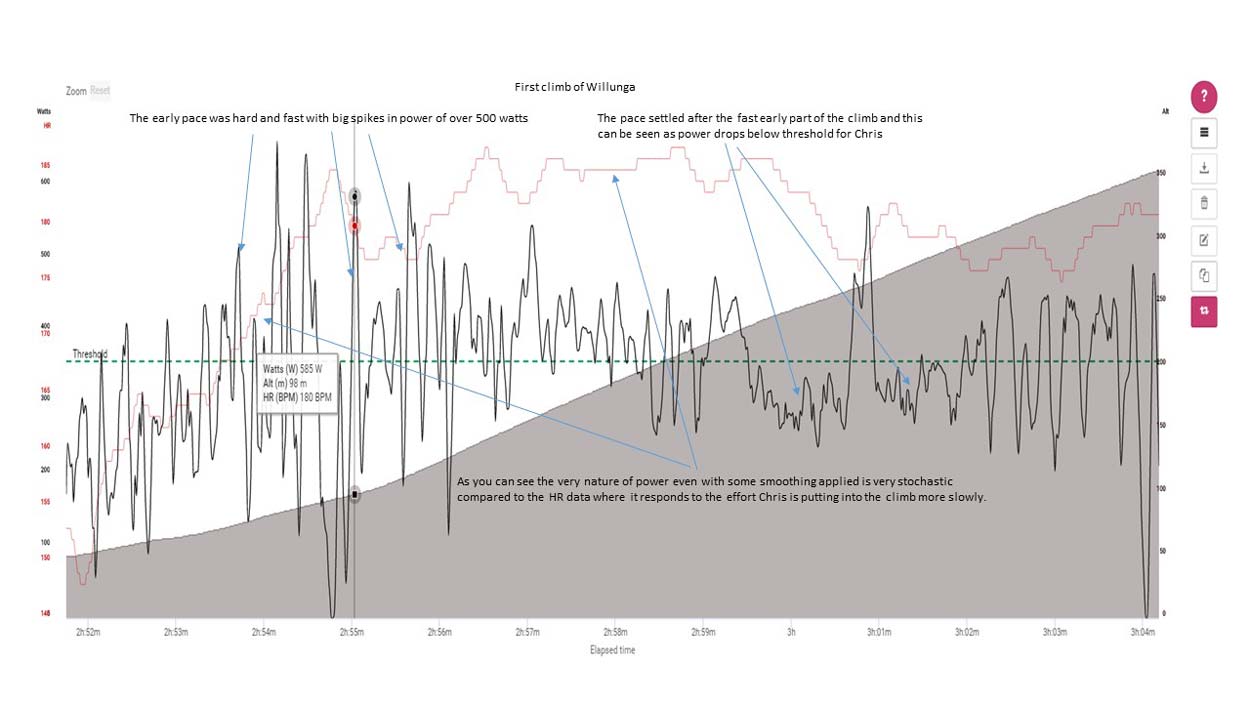 The break was caught on the final run into the base of Old Willunga Hill for the final climb and again the UniSA team did all they could to position the two Hamiltons in the best position possible to try and animate the race on the climb.

In this next graph we look at the final Old Willunga Hill climb (below).

I have created the main efforts as intervals in this graph and you can see three main efforts of between 30-60 seconds of 480-496 watts – these were completed after riding at well above threshold and represent between 7.8 – 8.1 watts/kg.

After the awesome attack by Lucas Hamilton midway up the climb the big guns got ready to make their final moves.

Richie Porte attacked hard and fast and Chris Hamilton responded with a big effort which split the already reduced front group. This was a huge effort and by the top of the climb it had Chris finish 11th on the stage and moved up to 14th overall on GC.

The main intervals from stage 5 (below).

It was a very good Tour Down Under or all of the UniSA riders and without a doubt the future stars of Australian racing have showed what they are capable of.

I hope you have enjoyed the data and analysis of what it takes to ride at the WorldTour level.