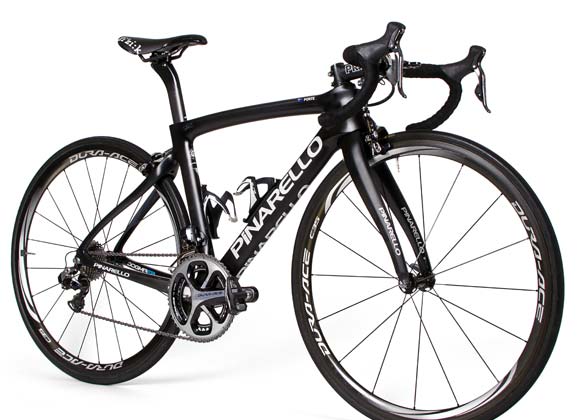 The Pinarello Dogma F8 was introduced to the peloton in June 2014. It is the result of a collaboration between the bike manufacturer and Team Sky’s automotive partner, Jaguar. The bike we were issued by Sky’s mechanics for the photo session this January is the one that was raced by Richie Porte, who finished second overall at the Tour Down Under. Have a look at the bike which features as one of the 17 from WorldTour teams that are part of the main feature of RIDE #67 (click the photo below).

To listen to some of an interview with Sky’s mechanic Gary Blem – in which he offers tips on bike maintenance and explains some aspects of his job, including product R&D as well as working with Sir Bradley Wiggins – click the SoundCloud links at the bottom of this page. (Find out more about this Pinarello and many other bikes in RIDE #67 – volume 01, 2015… on sale from 19 March.)

Click the photo below to begin the slideshow of Richie Porte’s Pinarello Dogma F8.

Gary Blem interview – Part 01: Sky’s mechanic talks to Rob Arnold about wear and tear because of bad weather… (click the link below to listen).

Rob Arnold spoke at length with one of Team Sky’s mechanics earlier this year and during that interview, the South African was asked if he had advice for the average punter about how they could best maintain their bikes.

Click the SoundCloud file to listen to his response (or read the transcript of some of the exchange, below).

“Get yourself a really good degreaser,” said Blem. “The biggest problem with people not cleaning their bike on a regular basis is because it’s such a mission to get the oil and the grit off the bike. If you use a really good degreaser, you can clean the bike relatively quickly. And if you can clean it quickly you don’t mind washing the bike on a regular basis.

“If you only wash your bike once a month, it’s going to take a lot longer to clean it…

“We’re a bit different: we wash the bikes daily so there’s not much time for the grit to actually stay on the bikes so they always stay nice and shiny. But I wouldn’t wait longer than a week to wash a bike – especially if you’re using it on a daily basis. And if you’ve ridden in the rain or extreme weather conditions, rinse off the bike at least and spray a little bit of oil on the chain just to keep it moist.

“Find yourself a good degreaser,” he reiterates before nominating his preferred product. “We use Muc-Off… it works really effectively, and it’s super fast. Like I say to people, ‘You don’t want to spend 10 minutes cleaning a drivetrain when you don’t have 10 minutes to wash 27 bikes at nine o’clock at the night in the rain.’ You want to be as fast as possible.

“It shouldn’t take longer than 20 or 30 seconds to clean a drivetrain.

“Just make sure you lube all the moving components straight afterwards. Most people will only lube the chain and forget about the brakes and the derailleurs as well – so put a bit of lube on them because obviously all the grease gets washed out of them as well.”

RIDE: [In January 2014] you were installing Stages power meters – that was an [change] for the team and you were due to get the new [Pinarello] F8 prior to the Tour de France. Since June of 2014, has there been a lot of product innovation for you guys? If so, what’s new for 2015?

Gary Blem: “It’s basically stock-standard since June. With the Stages, the battery casing the colour has changed to black for 2015 but nothing has really changed on the product itself.

“The F8 is a new release, so nothing has changed on the bike itself.

“The bike is superlight, super stiff… and the beauty is that we’ve had more time with the bike now and the riders are extremely happy with it; it’s very responsive.

“Fizik has changed the saddle designs slightly. They’ve renamed them: the Arione is now called the R1 which was the full carbon base saddle… the one with the Kevlar base is now called the R3. Some of the model names have changed but the [saddles] have stayed pretty similar.

“The Shimano Di2 is still pretty much standard that everybody has been using.

“The beauty about the Shimano Di2 is that often they do a software upgrade as they find bugs in the system. As long as you plug it into a computer, you can always upgrade your bike to the latest software which obviously will assist you later on.

“At the moment we’re working more on the Classics so there might be a few changes before the Classics. Let’s just see… I can’t really speak much about that for now because it’s still a secret, I guess. But there is a bit of development going on there now.

“Obviously, with Brad [Wiggins] wanting to win Paris-Roubaix, I think there’s a lot of emphasis on that race now.”