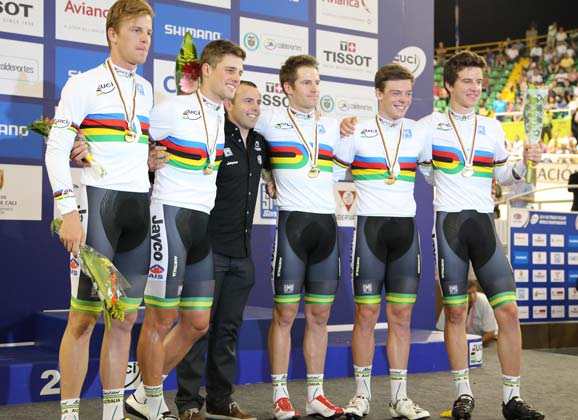 Australia has a rich history in the team pursuit. In Cali, Colombia on Thursday the green-and-gold express once again finished the day wearing rainbow jerseys. It was another successful title defence which is always worth celebrating. For one of last year’s team, however, it offered a moment of introspection.

Alex Morgan was in the line-up in Minsk last year but missed out on selection. He won his first elite world championships gold medal at the age of 19 and other chances are sure to come his way… but he utilised his “free” time today by writing up a few sentences on each from the latest line-up of Australian team pursuit world champions.

Oh yes, please note: although there are five who actually pedal around the track, it should be recognised that Mr Tim Decker is right there are part of the team… three cheers for the coach! 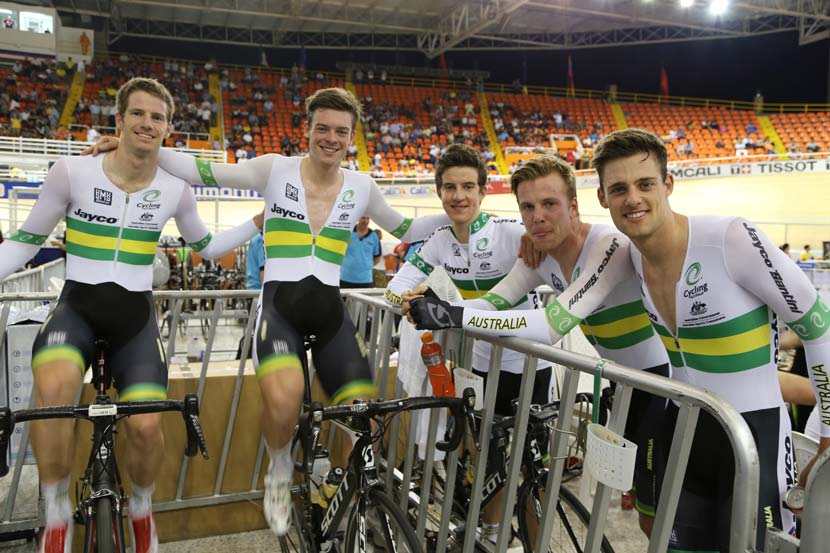 Today was bittersweet. Missing selection to the track world championships and not being given the chance to defend my rainbow stripes in the team pursuit hurt a lot. But seeing the group of boys who have become like brothers to me up on the top step of the podium in Cali, also makes me proud in many ways. I’m also particularly pleased to know that what we are doing is working.

There were five boys who represented Australia today in the team pursuit at the world championships in Colombia. You may have heard their names before but as they represent a young generation of cycling talent, I thought I’d take advantage of my ‘idle’ time watching from afar to provide a brief insight into the riders… 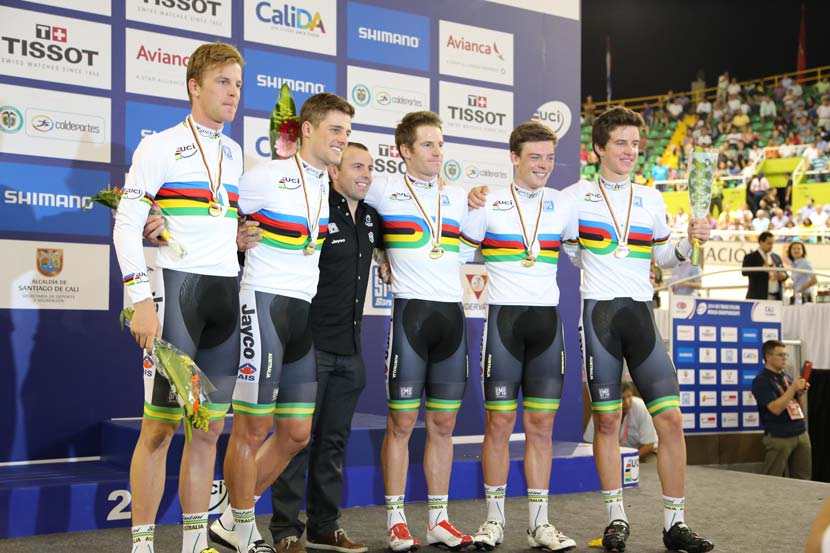 ‘Edmo’ – as he is more affectionately known – is 20 years old and lives in Adelaide. His sister Nettie is also a star cyclist and a fellow Olympian (from London 2012) and he loves his dog Hamish more than anything in the world.

I won the 2011 junior world team pursuit title in Moscow with Edmo and have known him for quite some time. He went to the London Olympics with the team pursuit squad but missed out on riding with the team there. That definitely gave him a lot of motivation. Last year we also won the team pursuit together at the world championships in Belarus. Since then he’s turned into a monster of a first-wheel rider and I’m certain that he’ll be over the moon with defending his title this year. Watch out for him in the bunch events at this year’s world champs too. (The plan is for him to ride the Madison with Glenn O’Shea on the final night as well as the individual pursuit in Cali.)

‘Glenno’, at age 24, is definitely the most experienced of the team and effectively our ‘elder statesman’. He also lives in Adelaide and I was also lucky enough to win the team pursuit with him last year in Belarus.

Glenno has one hell of a resumé on the track including a silver medal at the London Olympics in the team pursuit. Such is his class, that he can ride any position quite comfortably and still deliver fast times. I think coming so close to Olympic gold has definitely motivated Glenn a lot to want to be on that top step in Rio in 2016.

Luke is 23 and narrowly missed out on riding in the team pursuit at the 2013 world championships but came out and won bronze in the scratch race at the same championships. He also lives in Adelaide. Luke, like other riders in the squad, has turned his disappointment of missing a world championships ride into motivation and since then has been delivering many results including in the omnium. He has been working hard and will be elated at his first elite world championship title.

Mitch is from Brisbane – or Brisvegas as he likes to call it – and he recently turned 23. (We gave him a roadside birthday celebration while out training.) I am so happy for him to have won the team pursuit. I’ve only known him for a year and a half but when you spend so much time together it feels like a long time!

Mitch has copped disappointment after disappointment. For the last few years he’s only just missed world championship and Olympic selections but has kept coming back time after time. That determination to not give up or try something else has finally paid dividends for Mitch and I couldn’t be happier for him. When I was told I’d missed selection I was gutted, but at the same time realised that Mitch would finally be getting that hard earned golden ticket to the world championships and I’m sure of all the team he will be the happiest with this win!

Miles is the same age as me (19) and in 2012 we won the junior world team pursuit title together in New Zealand. He’s also from Adelaide and Miles’ big strength is that he can go deep, real deep. When most people would pull the pin and give up, he puts it into a harder gear and grits his teeth a little more. He works bloody hard and last year he was the second last person to be cut from the squad before the world champs. He’s known for his messy rooms while on tour and in Azerbaijan last year he almost completed a road stage with gastro and without eating for a good 24 hours!

A common theme with all these guys is how they have turned disappointment into more motivation to achieve their goals. I’m stoked for them and their win today, and hope they tear up the other events at the worlds in Colombia. Obviously for me it sucks being at home while all of this is going on but I’ll be cheering at the TV louder than anyone for my brothers.

Oh, and I’ll be back to my winning ways soon enough! Watch out for me at the Commonwealth Games: I can’t wait to be back in the green-and-gold skinsuit. 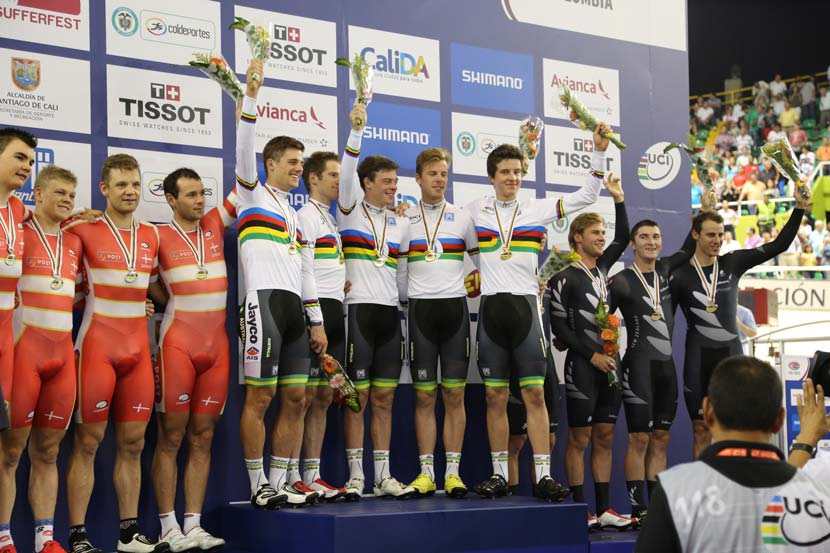