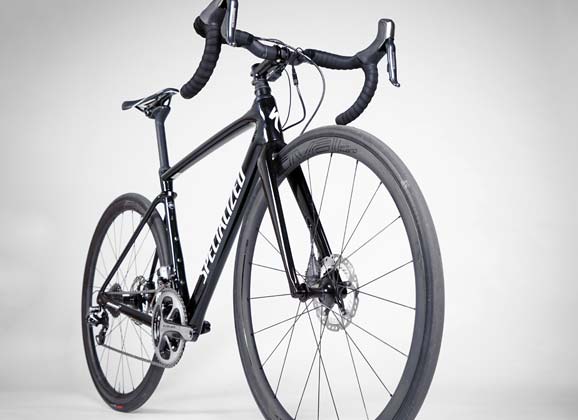 Specialized has a new Roubaix, and it’s a complete rethink of the cult classic that hangs proudly in so many people’s garages.

It’s been two weeks since RIDE first saw the new Specialized (and had a chance to ride the bike for a few hours) and we’ve been busting to tell you all about it. But this is all part of the new roll-out process that will essentially mean that the Roubaix is available in shops the day after the official public unveiling. 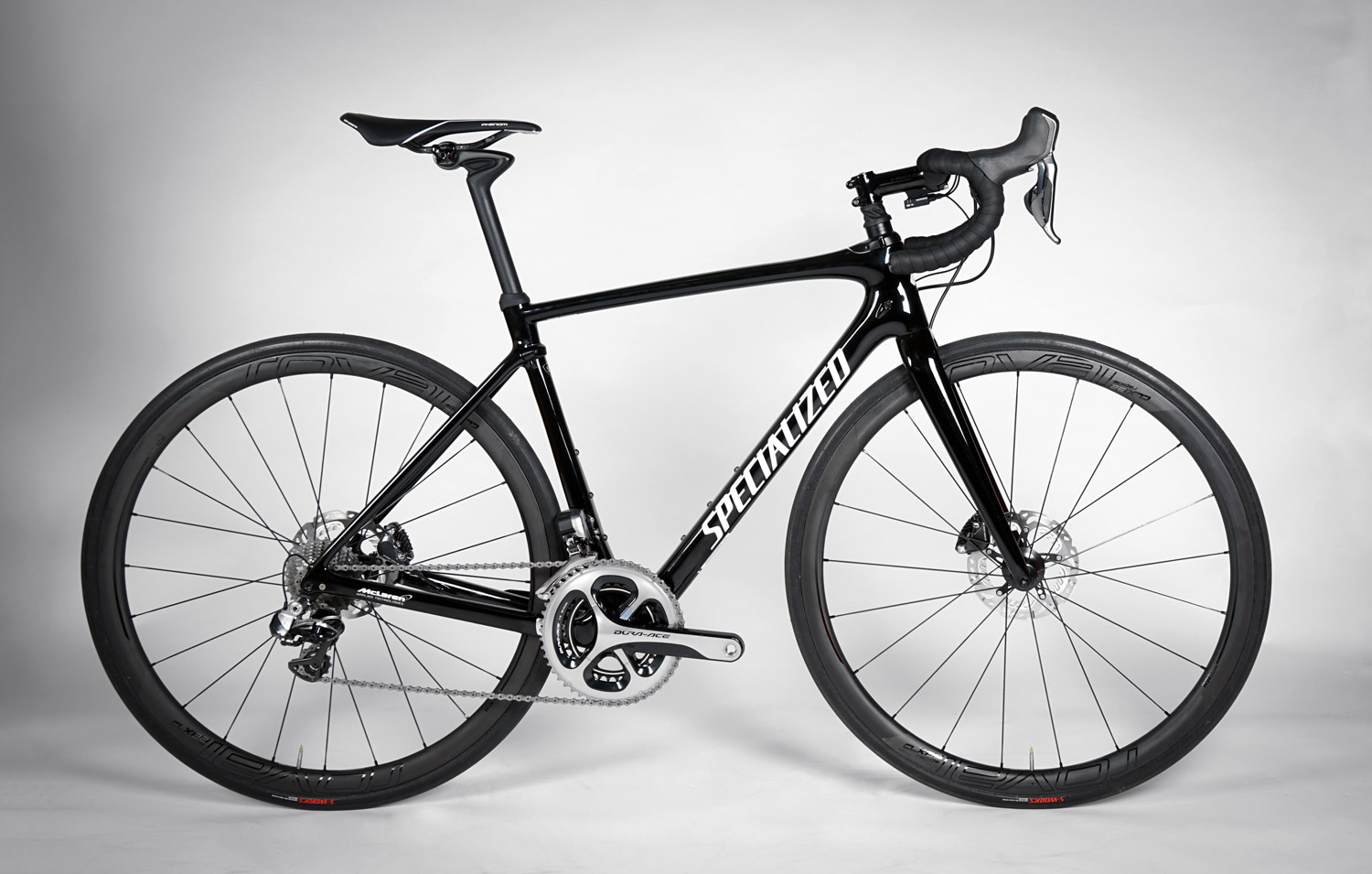 There were test rides for some cycling media in Europe this June and production has been underway for long enough for bikes to be shipped around the world in time for the release.

The embargo was lifted at 6.00pm (AEST) and details can be released about the Roubaix and Ruby. Expect to see a wealth of online items published on the same topic at the same time… such is life in the cycling media space these days, but it makes sense: it can be revealed, and customers can act immediately. None of that pesky wait-until-the-container-arrives syndrome that’s been prevalent in the past.

Specialized has again collaborated with McLaren – of Formula One notability – and come up with a strategy to quantify compliance. After spending hours in a laboratory, engineers developed the most efficient bike across rough surfaces and had the empirical data to support this claim. Specialized says the Roubaix and Ruby frames are smoother than anything else on the road and, as we all know, smooth is fast.

View the following images to get an idea of the Roubaix’s rebirth.

There’s a full write-up on the Roubaix in RIDE #73, including a road test.

(Note: The new issue begins printing on Monday 12 September and will be on sale a little later than the new bike.) 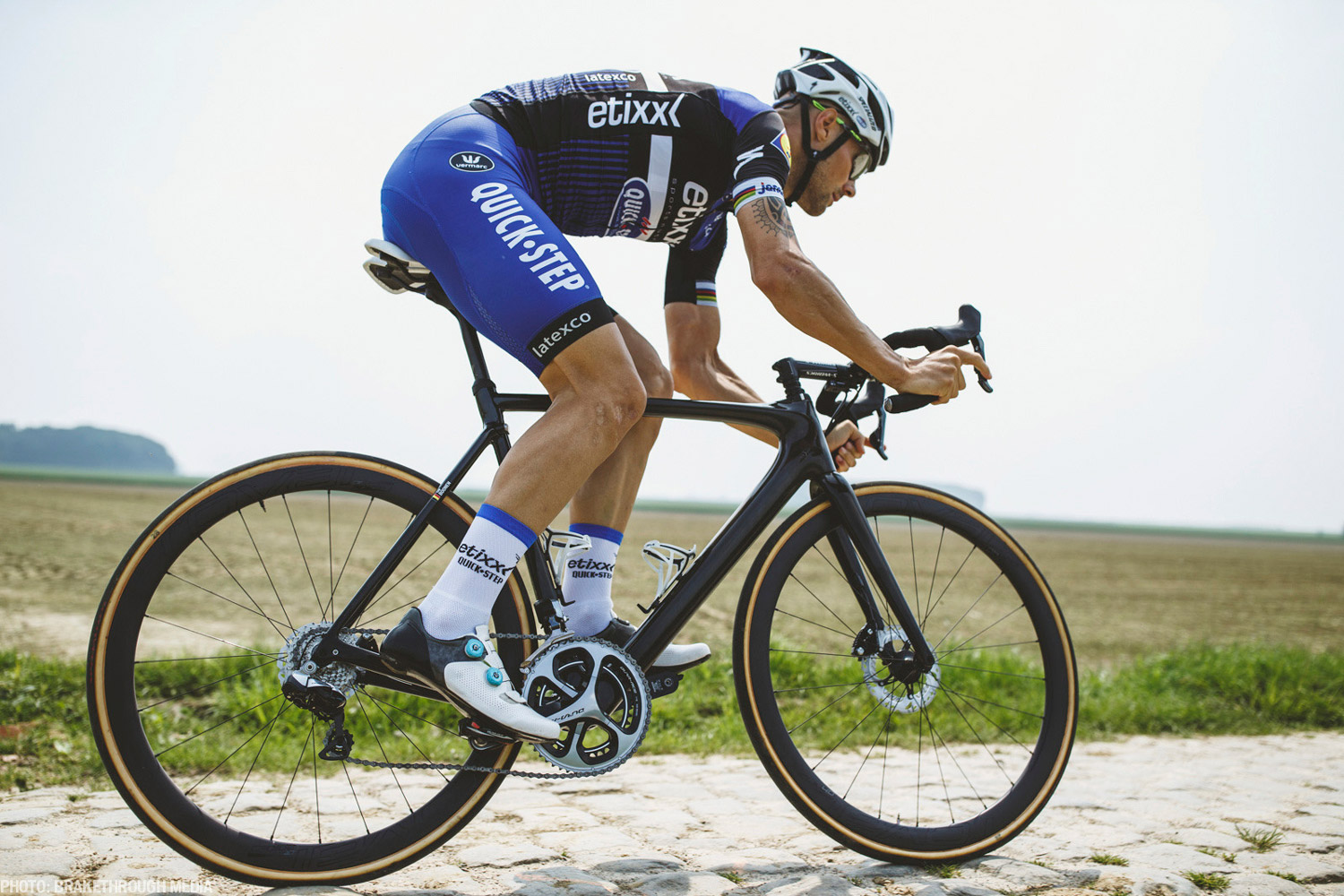 Tom Boonen is the most high profile proponent of the Specialized Roubaix. In essence, the bike was first built for the Belgian champion and he has raced it at Paris-Roubaix with great success. (Admittedly, he was beaten this year in a magnificent match against Mathew Hayman, but that’s a story from the previous issue…)

To see Specialized develop the new model in conjunction with Boonen means that it has been designed with the input of one of the best riders in the world as well as some of the best engineers out there. 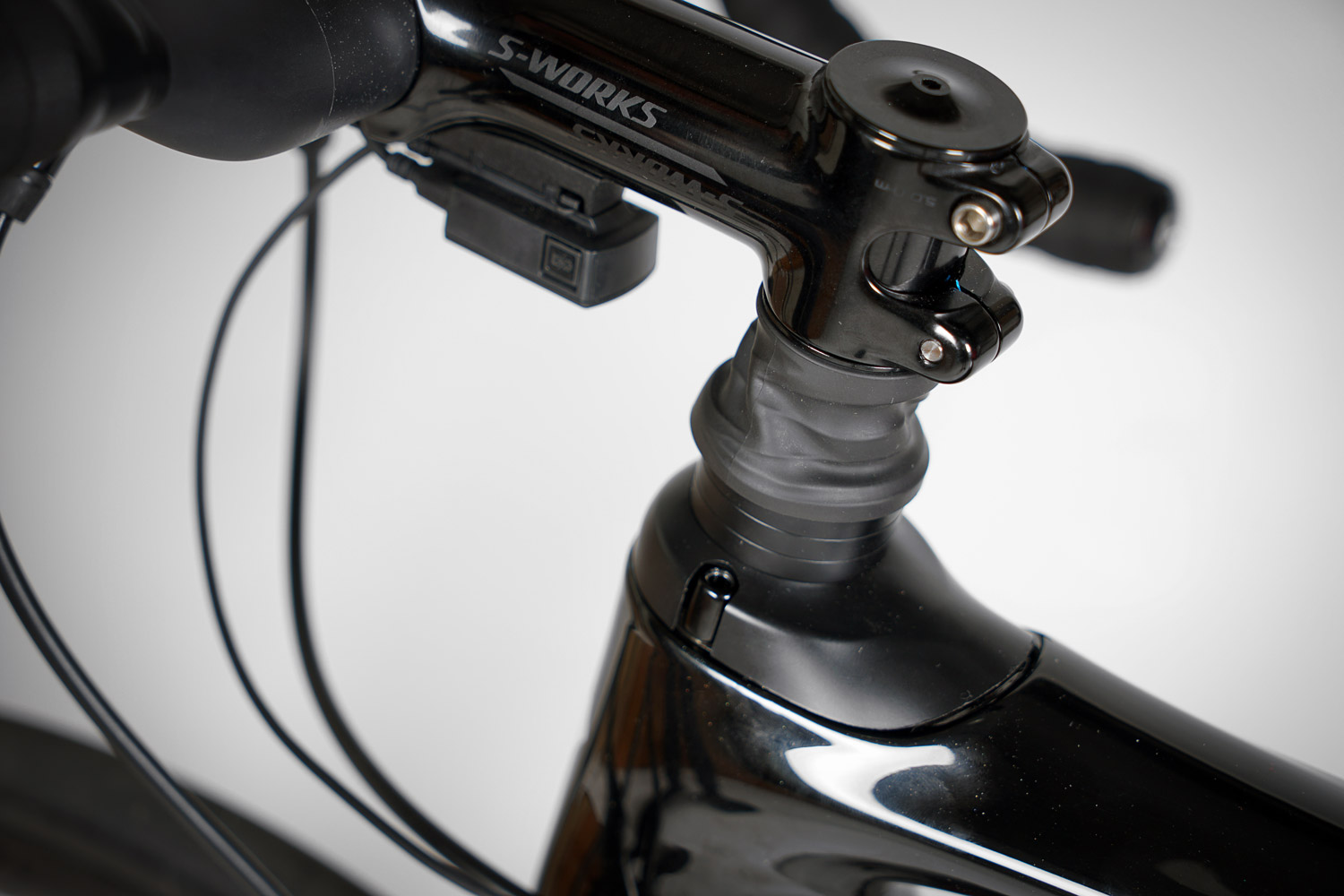 This is the FutureShock

A spring-loaded headset damper is one of the main features of the new Roubaix; it alleviates much of the road vibration through a rider’s hands. This is part of Specialized’s idea to ‘suspend the rider’ above the bike, rather than its old method to enhance bike compliance, hoping to increase rider comfort. 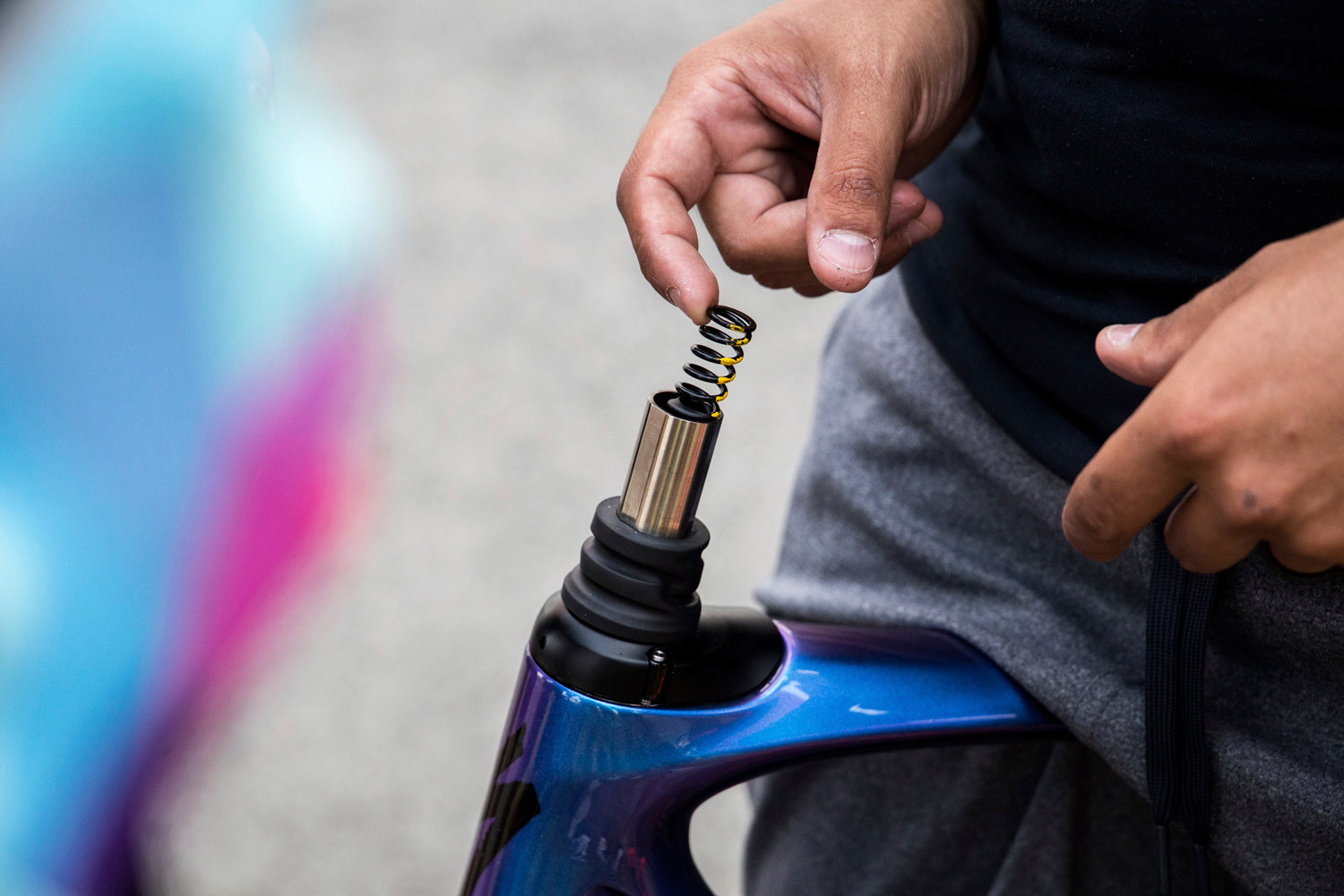 The Ruby and Roubaix each come with three different springs so the rider can choose the FutureShock’s return rate. There is no need for fastidious servicing as with suspension forks and changing springs is an easy task. 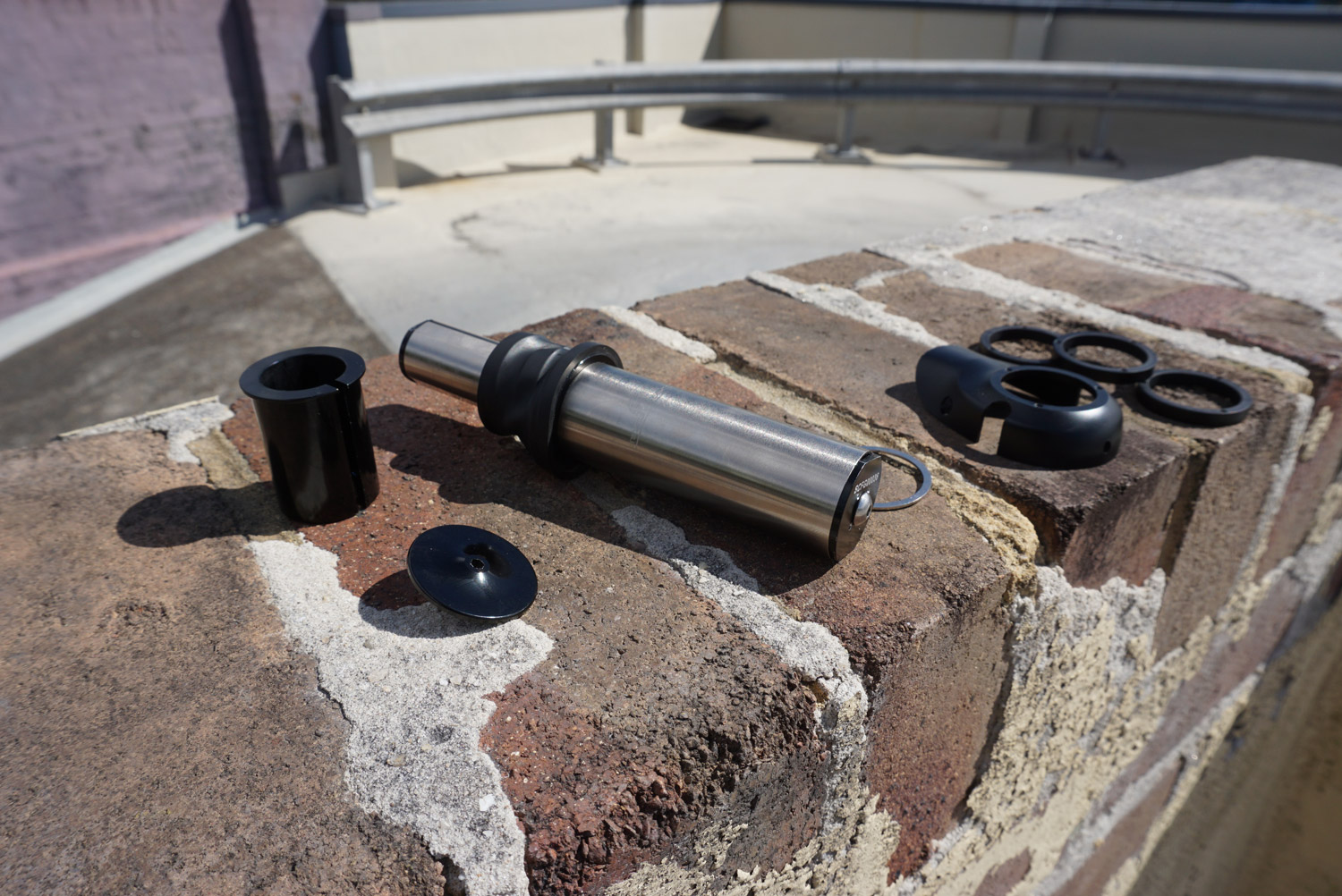 The FutureShock cartridge is very simple. It slides into the pre-cut steerer tube, is tightened and then has a stem clamp on as normal.

During our presentation, Patrick Young from Specialized pulled the system (above) apart several times so that we could get a better look at how it all worked, and each time the bike was put back together in a matter of minutes. 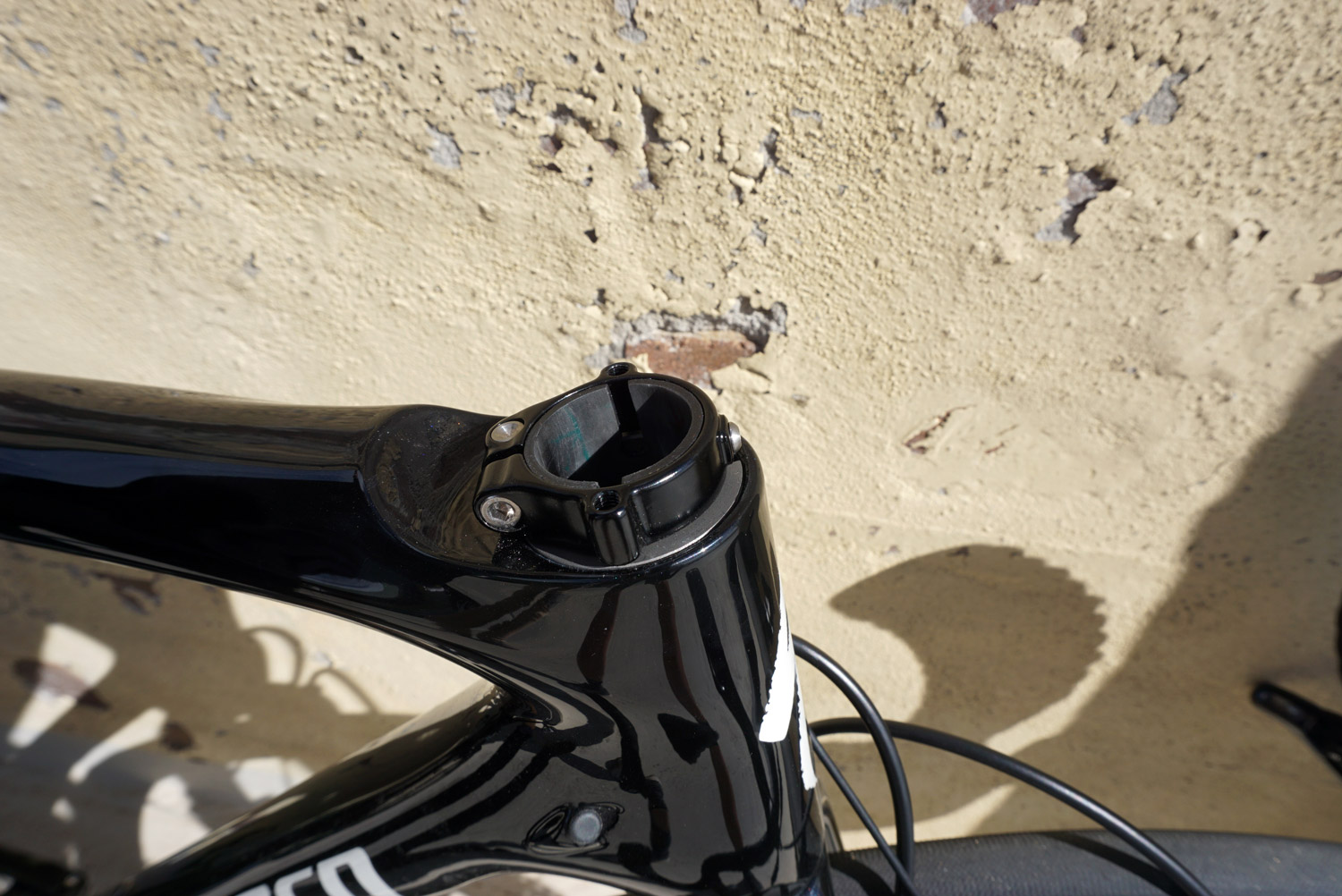 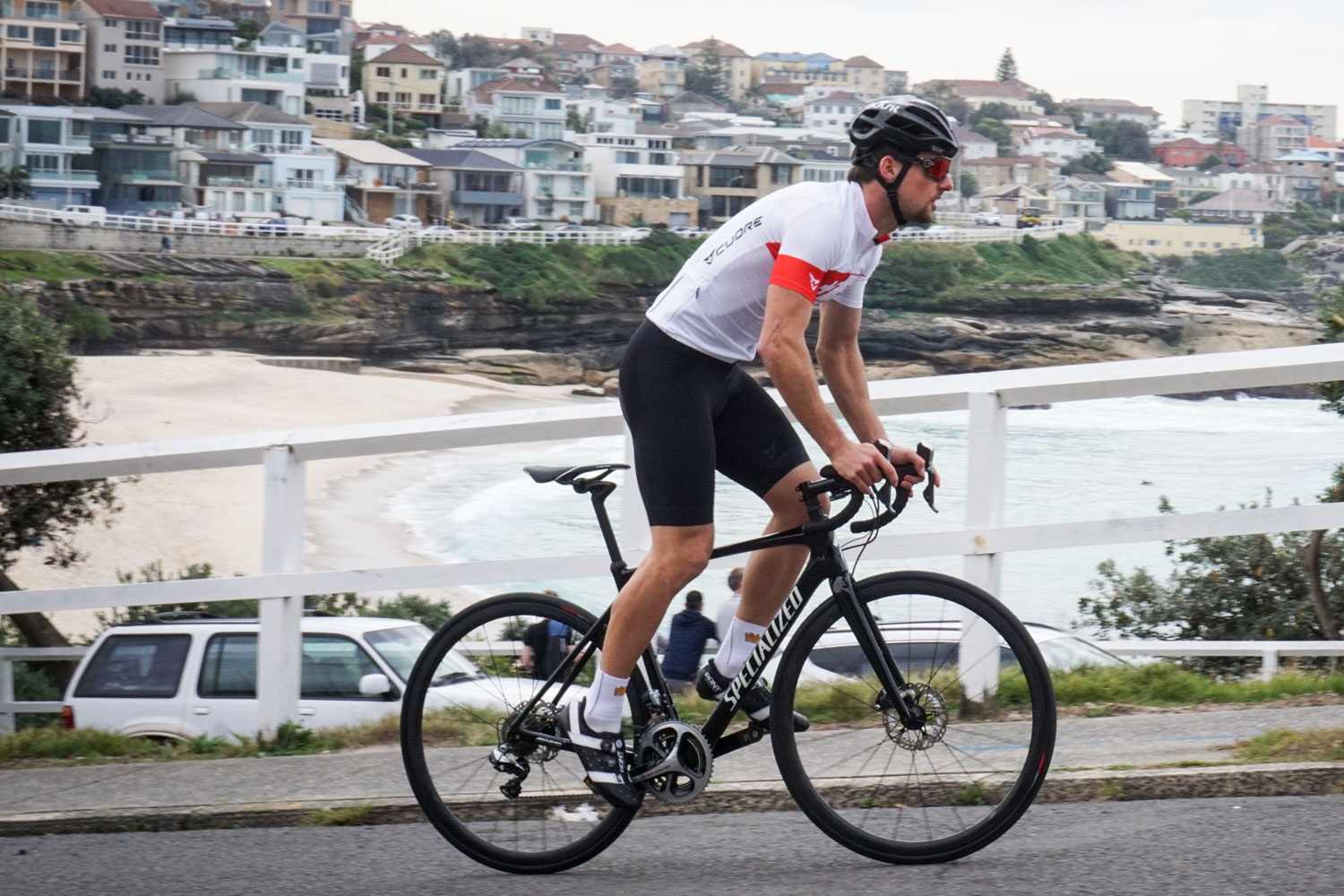 Luke Davison (above) won the NRS in 2012 riding a Specialized Tarmac SL4. He now works for RIDE Media and is one of only a handful of riders in Australia to have sampled the Roubaix before the official release.

The whole idea of Specialized’s new compliance method is to make the bike more stable and give control to the rider.

At 7.57kg (54cm as weighed by RIDE), it is as capable ascending as it is flying down hills. 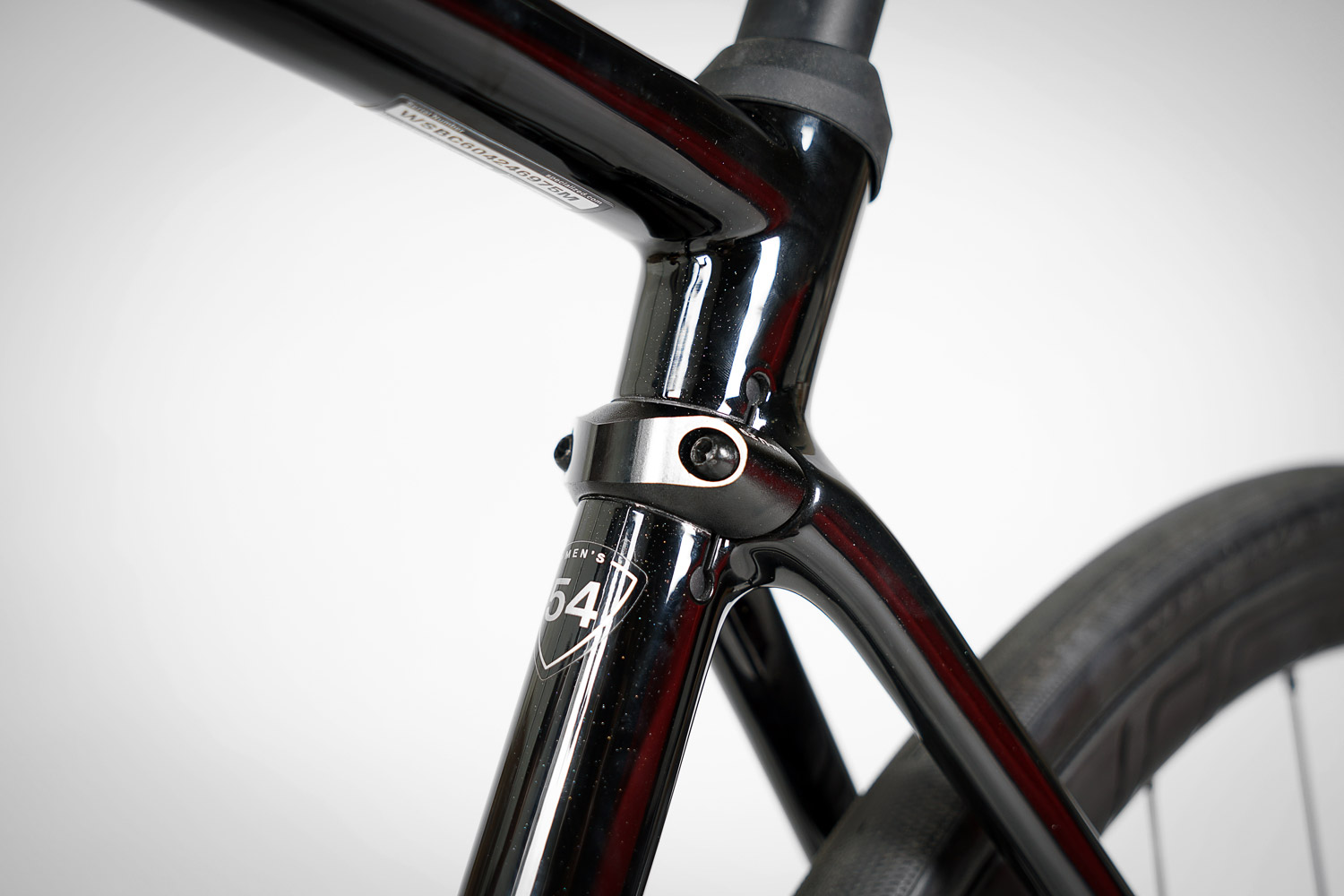 Other highlights of the new bike

Specialized has also rethought the way the seat post clamps.

The pinch bolts attach to the seatstays which are 65mm below the exit point of the seat post (above). There is room in the seat tube for the post to move as the rider encounters a rough surface. On application, it’s surprising just how much flex there is in the post and many have noted how there seems considerable extra give without a traditional clamp high on the seat tube. 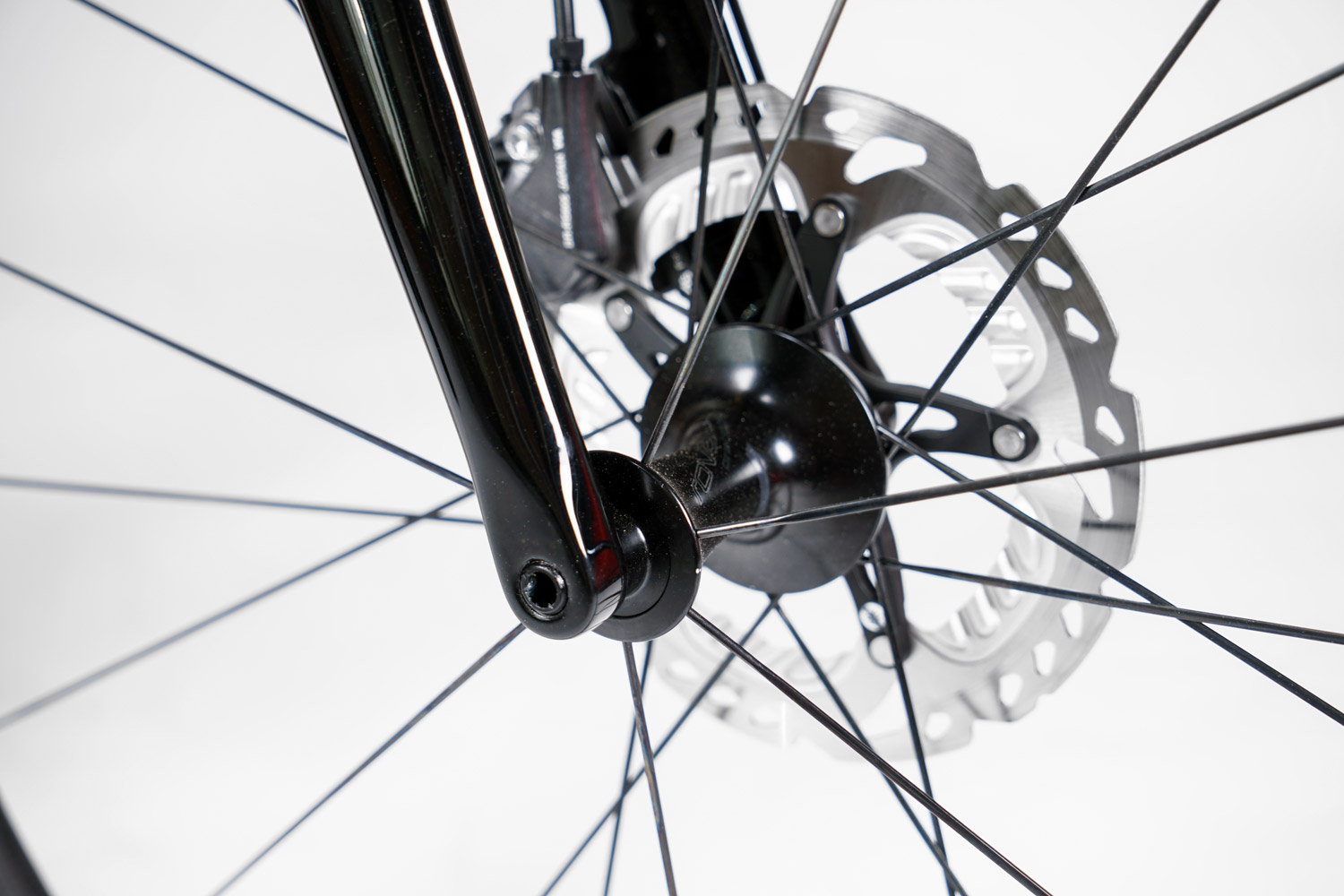 The new Roubaix and Ruby bikes will only be spec’ed with disc brakes. Specialized has opted for 12mm thru-axles front and rear, and 160mm rotors. 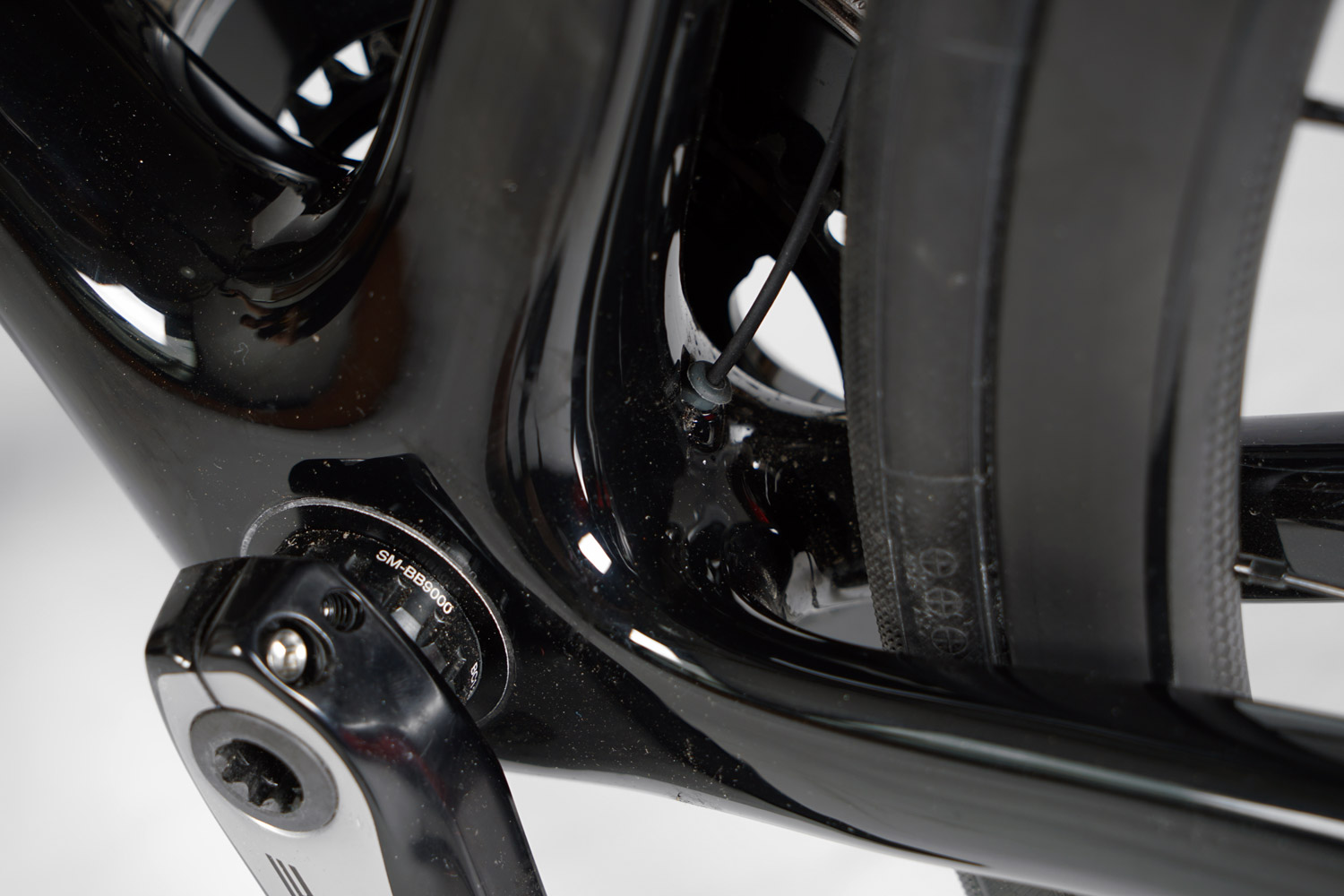 Could this be the end of PressFit bottom brackets? Specialized has sided with a threaded BB on its latest offering. 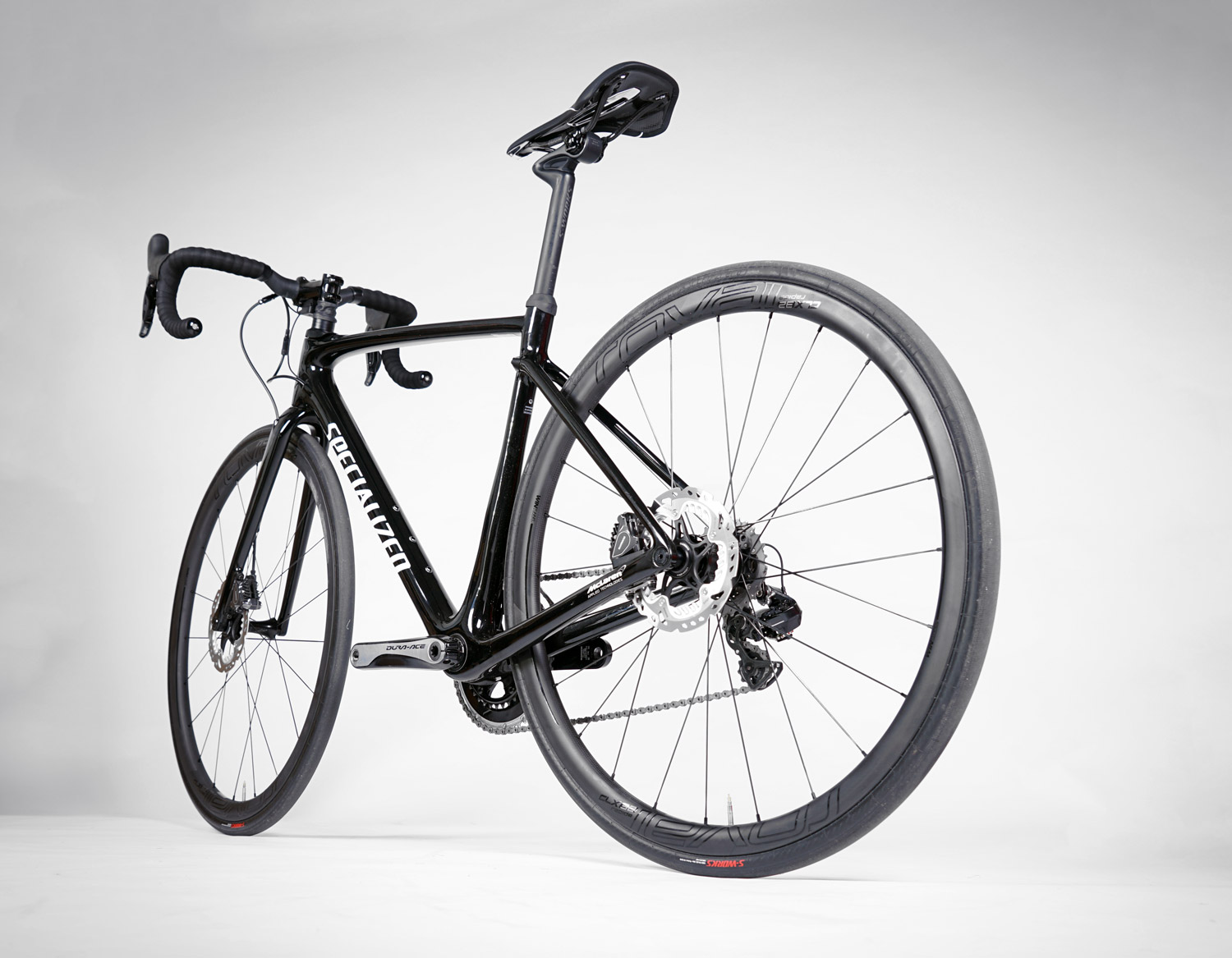 Not to be ignored, Specialized is releasing a new wheelset and retiring another. The Roval CLX 32 replaces the CLX40 because it is both lighter and more aerodynamic – few would refuse these upgrades! 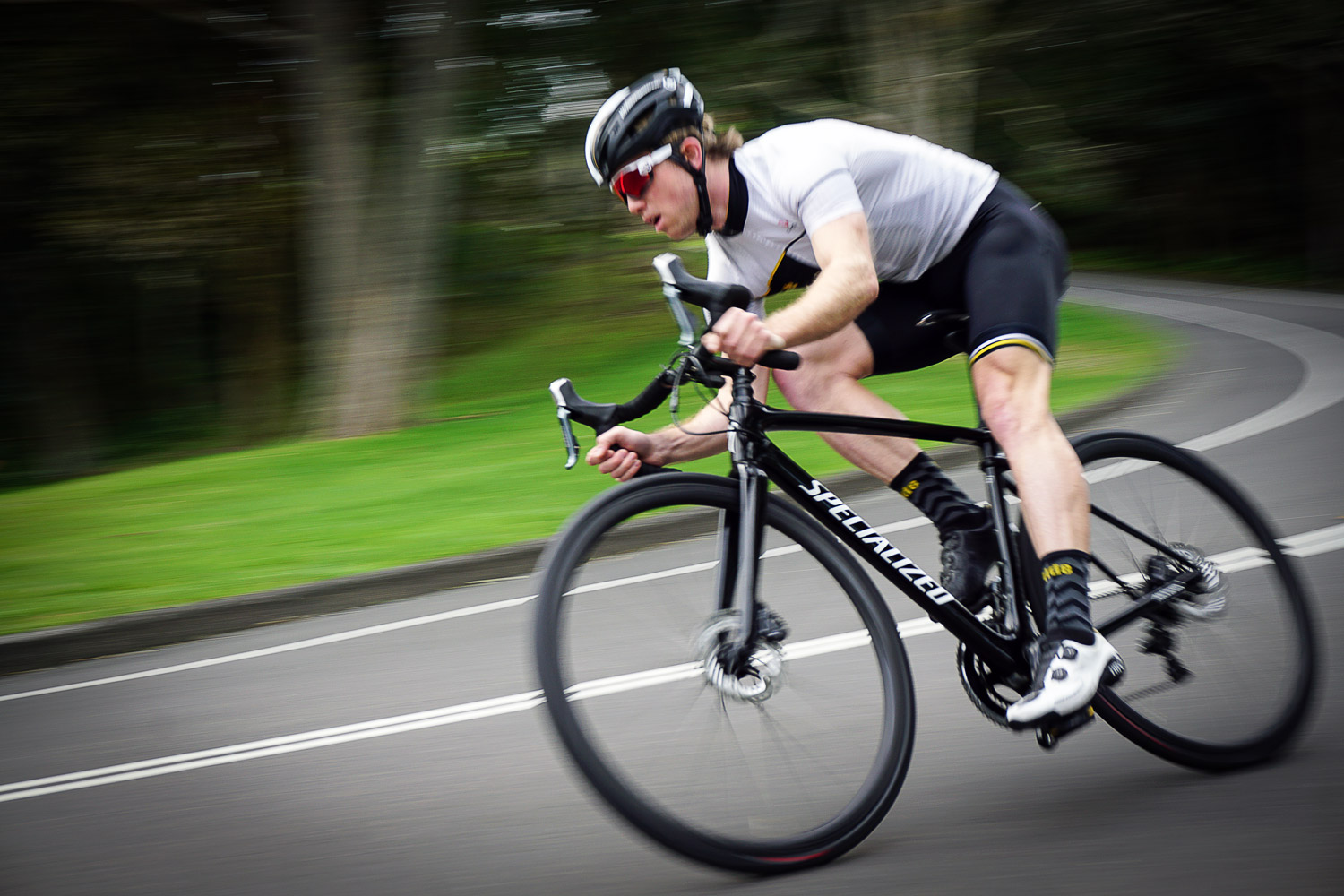 Yes, it does ride fast and smooth downhill…

The Ruby and Roubaix start at $2,300 AUD and increase at reasonable increments to $11,500 AUD. The top of the range S-Works model is equipped with carbon wheels and SRAM eTap. At this stage, there are five models of Roubaix and five Ruby renditions. An S-Works Roubaix frameset is available for $4,500 AUD. Visit a Specialized dealer for further details.

Pick up your copy of RIDE Cycling Review to read more about this fascinating bike and, of course, plenty of other great cycling content.

(All uncredited photos by RIDE Media.)