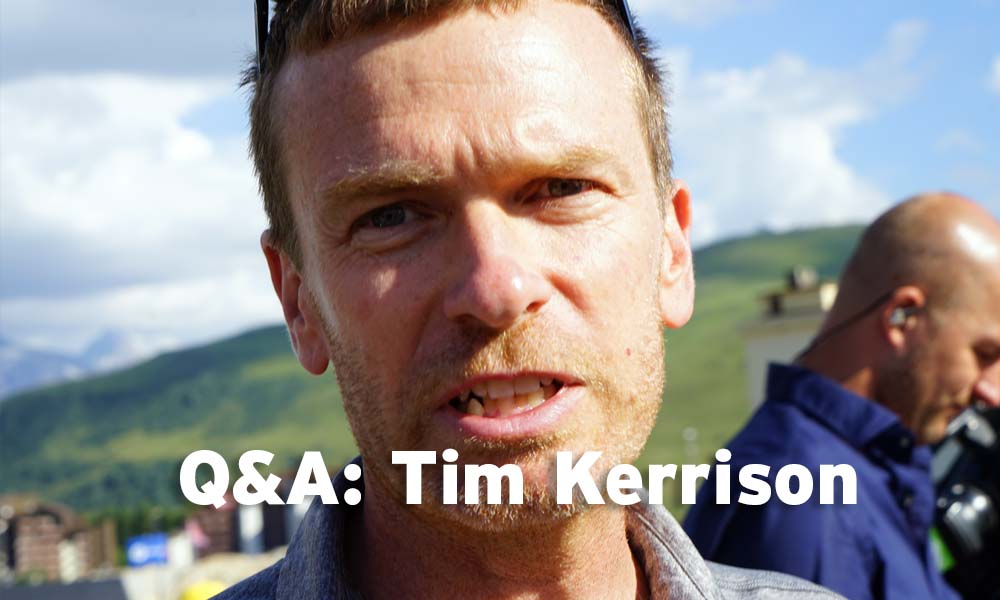 Q. How is the dynamic of personalities with [Geraint and Chris] versus what it was like in 2012 when you had first and second on GC

One of the key members of the Team Sky staff, someone that the riders often refer to when commenting on the success the outfit has enjoyed, is the Australian trainer Tim Kerrison. Usually calm, collected and hovering in the background, people are aware of what his role is but not exactly all that he does and what he thinks of the approach taken by the management.

Shortly after Geraint Thomas won his second successive stage in the 2018 Tour de France – this time at Alpe d’Huez, while wearing the yellow jersey – Kerrison was wandering around the finishing area looking for his team bus and some of the riders.

I told him that, moments earlier, Egan Bernal had ridden down the hill along with a rider from Movistar. “Was there any team staff with him?”

Then, when he realised there was little that could be done and that there was no point in walking aimlessly around the village of Alpe d’Huez in the hope of seeing a sign of the Blue Line, he stood still for a moment as if to try and take in all that had just unfolded on the slopes of this famous climb.

It seemed as good a time as any to ask a few questions of this pragmatic man who has helped two riders win the Tour de France in the past… and, the way things are shaping up in 2018, there just may be a third one.

Geraint Thomas is now 1:39 ahead of Chris Froome and so I started the question session by asking: Is this sort of the time when [the team] decides that Geraint is the leader?

“Um, you know it’s a fantastic position to be in, to be still first and second on GC,” he said in typically reserved style, but by the end of the chat he was being far less guarded.

“We’ll review the stage after today and see where we’re at.

“For now, we’ve got two guys… we’re in a very strong position. We’re happy to be in that position and we’ll take it one day at a time.

“As you saw today, we were able to… we’ve got the strength of team to support two leaders – or two very strong riders – and for now we’ll continue to play it like that.”

– Click the SoundCloud file to listen to the full interview and/or read the transcript below. –

Click the link above to listen to Tim Kerrison talk about Geraint Thomas and Chris Froome, first and second on GC in the 2018 Tour de France after 12 stages.

Q. RIDE: It seems like Geraint was almost holding back. When he was marking Tom [Dumoulin], he was following the wheels but when [it was] Chris’ turn to chase, he seemed on his limit…

A. Tim Kerrison: “Well, they finished within a couple of seconds of each other.

“Today, G finished in front of Chris and we’ll continue to assess things day by day.”

Q. Rupert Guinness: You know how both riders are conditioned up until this point. Has Geraint still surprised you at all?

A. Tim Kerrison: “You know he’s one of the hardest working, most committed athletes I’ve ever come across. He certainly continues to improve and he’s riding at a level that he hasn’t ridden at before.

“Does that surprise me? Not really, knowing how hard he works. And he’s obviously got a great pedigree: two Olympic gold medals before he really, really turned to road cycling, so…”

Q. …Can you tell us more about his transformation?

A. Tim Kerrison: “I wouldn’t say transformation. He’s had an evolution from being a track rider to wearing the yellow jersey in the Tour…

“It’s been a slow transformation. We’ve all seen it evolve over these last 10 years on the road but everyone knows that that’s what you need to do to be a GC rider, you need to bring the weight down and train hard and develop your power.

“It’s what everyone of these guys tries to do.”

Q. RIDE: The only level of doubt with Geraint is if he’s going to last three weeks. You would know him better than anyone else. How is he going to do that in 2018? Do you think he’s going to get stronger as the race progresses?

A. Tim Kerrison: “You know, I’m not sure that anyone gets ‘stronger’ as a three-week Tour progresses.

“It’s about resisting the fatigue and maintaining your level as much as possible – doing everything you can to recover.

“We know it doesn’t make it easier to recover when you’re in the yellow jersey, either; you have an hour or an hour and a half of extra commitments each day while he’s in the jersey which cuts into your recovery time.

“So, there are additional challenges to recovering and holding up over the three weeks when you’re in the jersey.

“But, you know, you’re right; obviously Chris has won six Grand Tours, he’s podiumed on more than that – perhaps 10, I think – and G is going into unchartered territory. Obviously we’re all very aware of that.

“But, like I said, what a fantastic position to be in to be first and second on GC with two strong riders.”

A. Tim Kerrison: “He’s trained more over the years. He’s raced more Grand Tours. I think the difference between that Tour de France (2015) and this in particular is he did a hellof a lot of work in the first half of that race, found himself still in the top five on GC, but then carried the fatigue from that first week into the last day.

“He also had that crash, if you remember, on the descent into Gap where he hit his head quite hard on the telegraph pole.

“Every Tour is different, every Tour has its unique set of circumstances. He is an older and more mature, better conditioned rider now than he’s ever been. So, of course, it’s going to be something that everyone’s going to be watching with interest over the next nine stages of the race. And we’ll be doing everything we can to manage it and try and keep him at the level he’s at now.”

Q. Rupert Guinness: How does Chris and Geraint sort of manage their relationship together, in the situation where they’re both…

A. Tim Kerrison: “They have been training together and racing together and in the same team now for the last… well, not just the last eight years, they were in Barloworld together for a couple of years as well.

“They’ve been team-mates for a long, long time and I think, on the one hand, they… it’s such a fantastic position of strength.

“Everyone always talked about the tactical advantage that having two GC riders gives you so [in that regard] that’s fantastic. Of course, there’s an element of managing that that we have to assess day by day and assess where we’re at and what’s our best chance of winning the race.

“Ultimately we want to win this bike race.”

Q. RIDE: How is the dynamic of personalities with these two versus what it was like in 2012 when you had first and second on GC?