The inaugural edition of the Tour de France Femmes begins in Paris on Sunday 24 July. The official start list is yet to be finalized but some teams have begun to announce the six riders they have selected for the eight-stage race.

With five days to go until the second TDF Grand Départ of 2022 – ie. the Tour de France Femmes avec Zwift* – teams have started to release their selection of six riders for the eight-stage race. There will be 24 teams contesting the race from Paris to La Super Planches des Belles Filles (24-31 July).

It’s possible that there will be some last-minute changes; COVID protocols require negative test results before riders are allowed to take the start and, of course, accidents can happen between now and when riders roll away from the Eiffel Tower at the start of stage one.

According to the provisional start list published on the reputable ProCyclingStats site, there are likely to be at least nine Australians in the peloton of 144 riders. 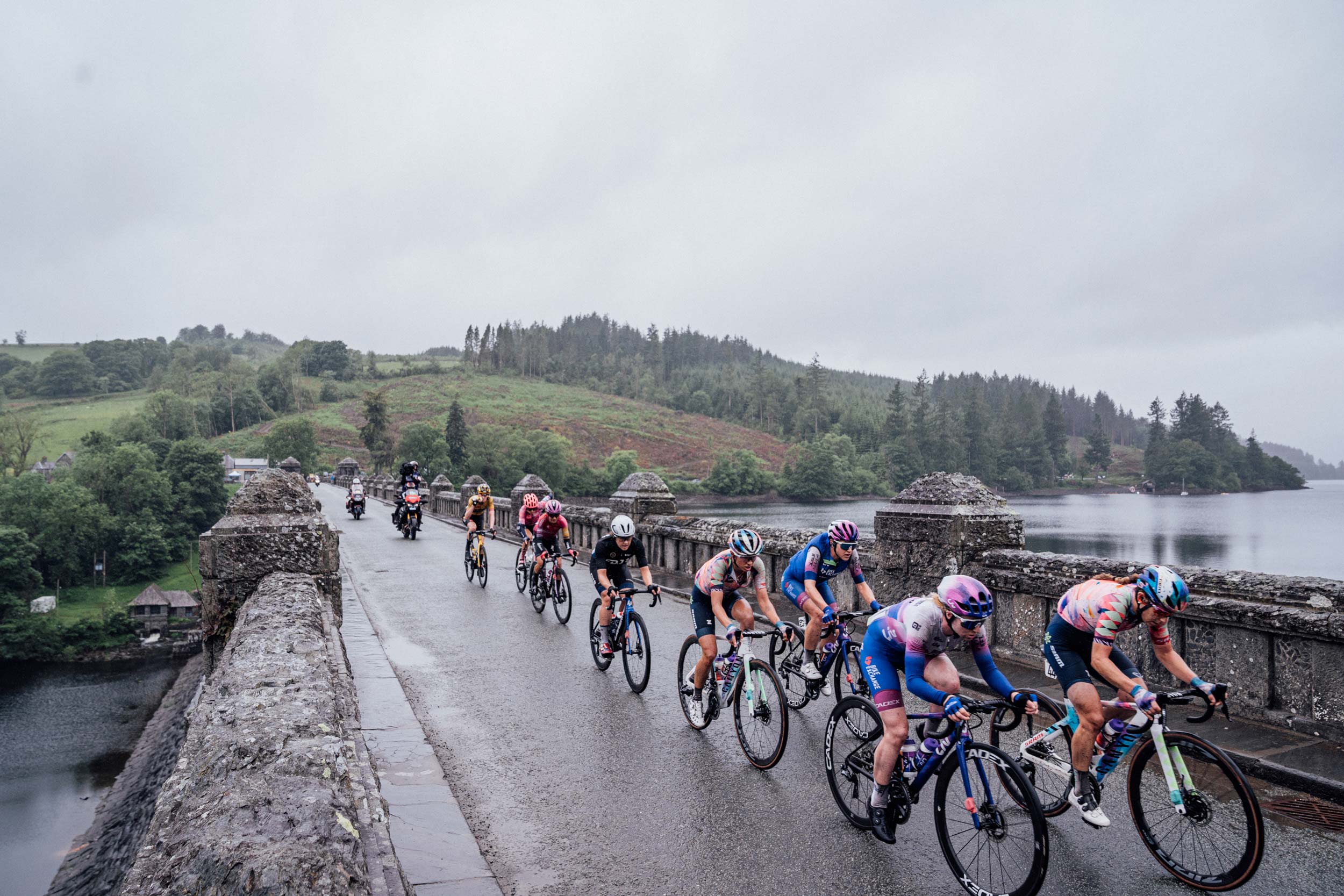 Team BikeExchange-Jayco’s early rider nominations include three Aussies: Amanda Spratt, Alex Manly and Ruby Roseman-Gannon, with Manly going to Paris as one of the in-form riders of the season.

Manly’s dominant performance at the Thüringen Ladies Tour in May – where she won four of the six stages, the overall title and the points classification – suggests that she is likely to be one of the leaders of the Australian-registered team. So far, however, only four of the six positions have been confirmed.

There’s depth in the BEX line-up that is also expected to include Slovenian Urska Zigart, the partner of two-time TDF champion Tadej Pogacar. The final two spots in the Australian team, the only one contesting the Tour de France Femmes avec Zwift, will be formalised in the coming days. 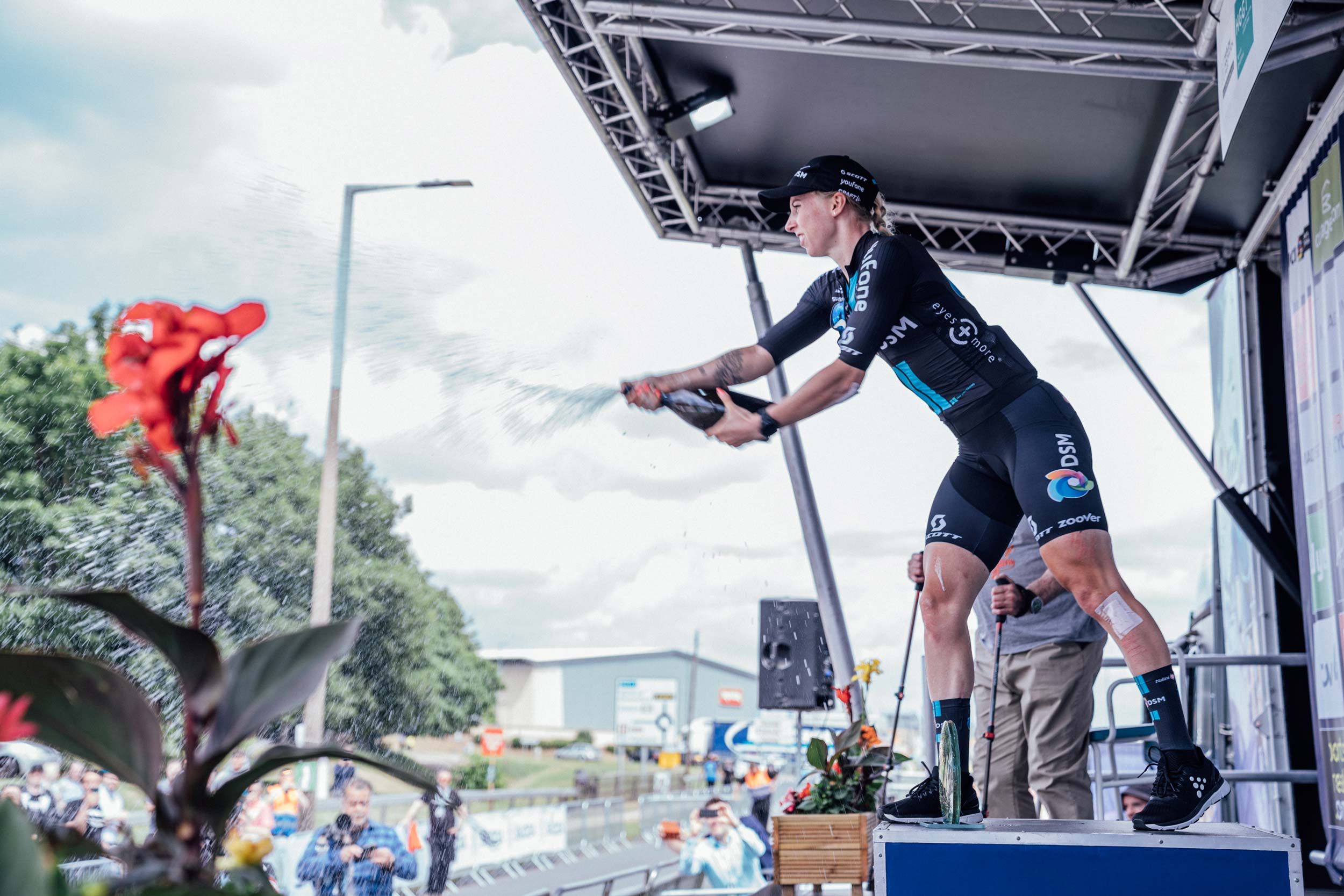 “We have two main goals for the race,” explained Team DSM DS, Albert Timmer, “to go for sprint success with Lorena as our fast finisher, while Juliette will go for the best GC result possible for the team.”

Labous, winner of the recent Vuelta a Burgos Feminas, also won a stage of the Giro Donna (and finished ninth on GC). Wiebes claimed four stages of the Baloise Ladies Tour this July and has already amassed 15 victories so far in 2022, including the overall title of the RideLondon Classic. 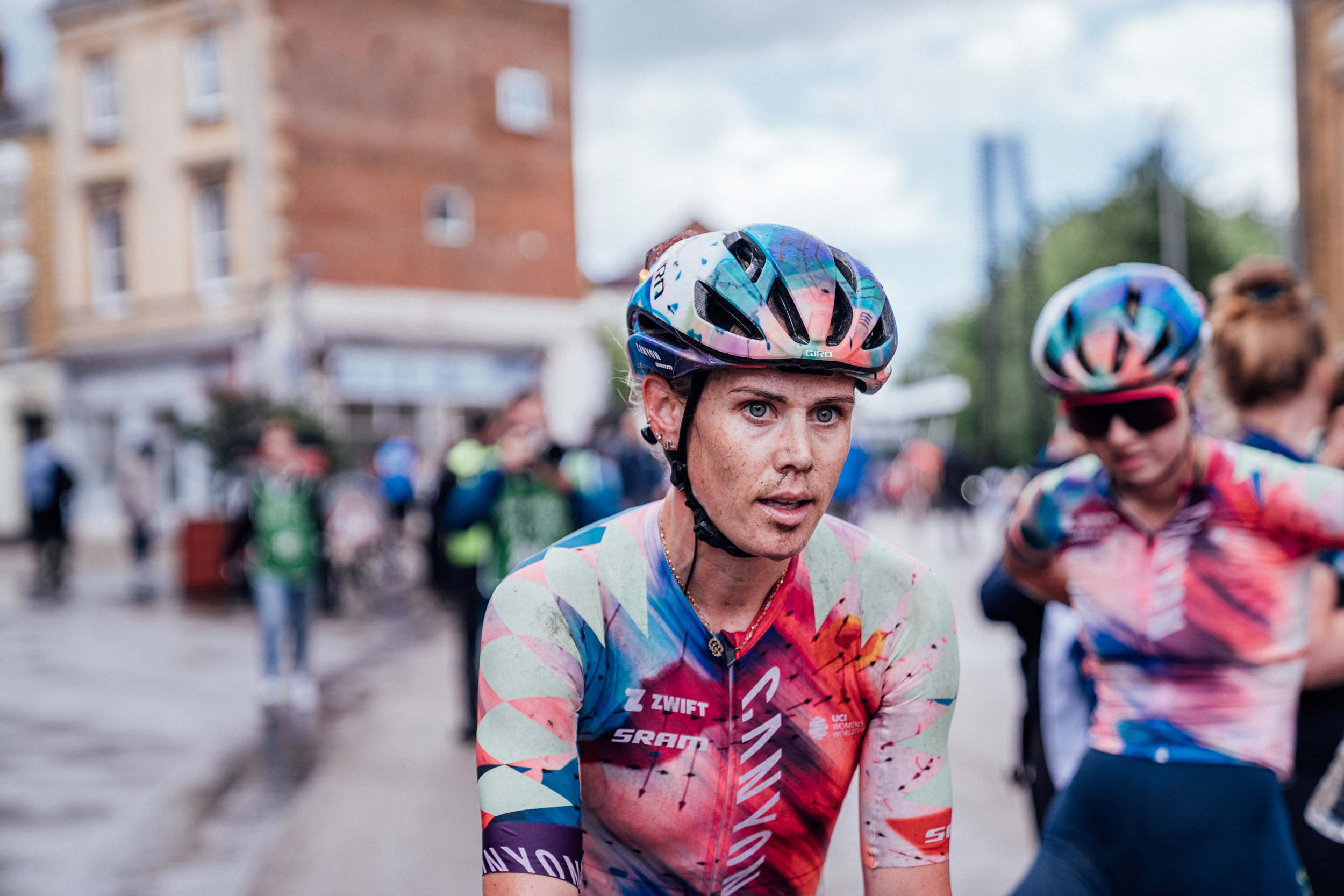 Canyon-SRAM is another team to confirm its start list overnight with another Australian featuring in the selection. Tiffany Cromwell will join team leaders, Kasia Niewiadoma (POL) and Pauliena Rooijakkers (NED), as well as Alena Amialiusik, Elise Chabbey (SUI) and Soraya Paladin (ITA).

“In the last two weeks, things have started to click,” said Cromwell in the team’s release. “My main role will be team support and road captain. We have an incredibly strong team for the race, especially for the demanding and climb-heavy stages.”

There is one notable absence from the Canyon-SRAM line-up, Chloe Dygert. The American star continues her recuperation from the Epstein-Barr virus and will sit out the TDF in 2022. 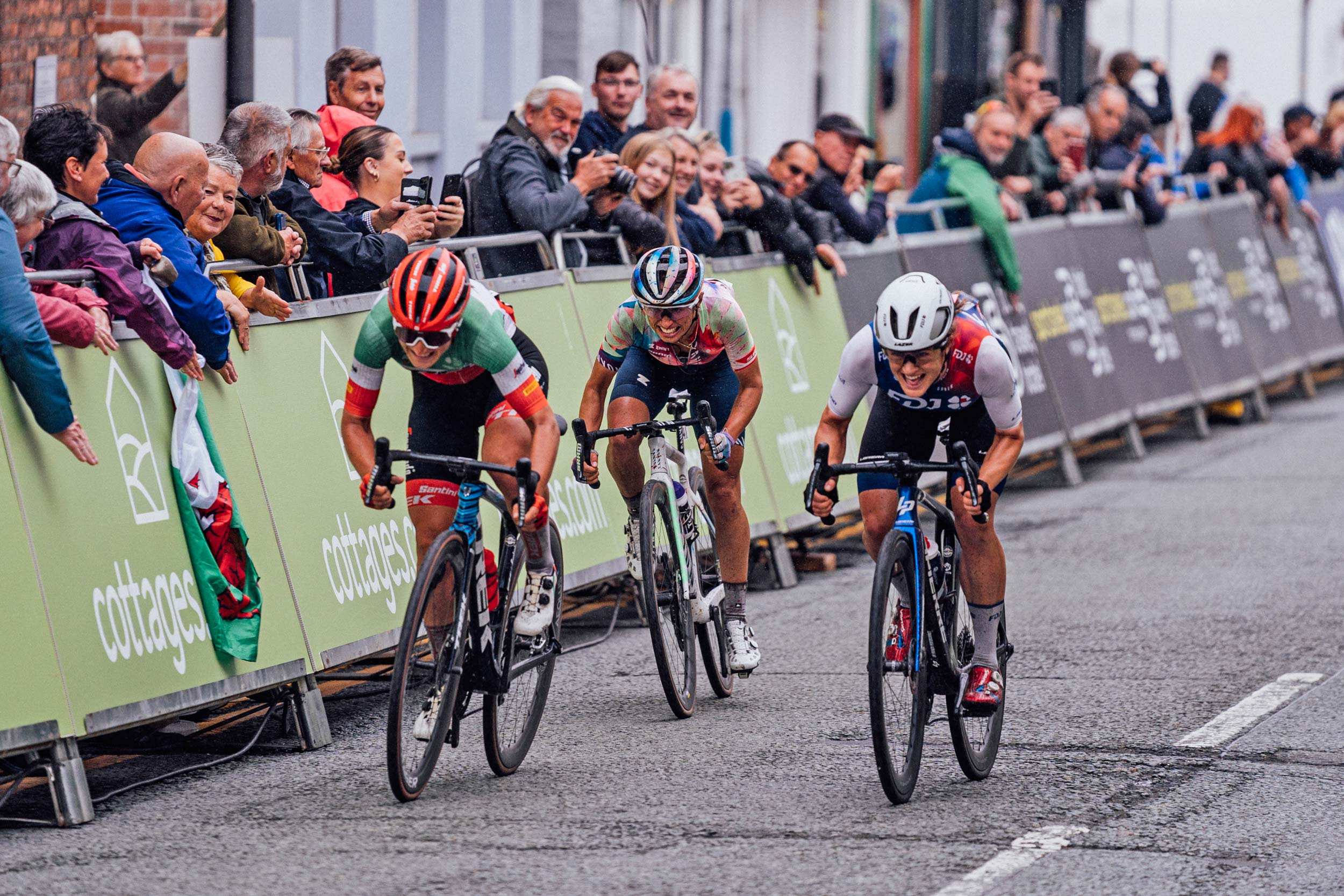 Grace Brown going head to head with Elisa Longo-Borghini and Katarzyna Niewiadoma in the sprint for stage four honours of the recent Women’s Tour in Britain. (Photo: Zac Williams)

The fourth-place finisher in the Tour de Suisse, Brodie Chapman, misses out on selection but Australian fans can expect to see her in action in Wollongong later this year when she’ll be an obvious candidate for the national team at the world championships (18-25 September).

The Spanish-registered Movistar team that boasts one of the title favourites, Annemiek van Vleuten, is expected to confirm the presence of Sarah Gigante in the coming days. (Stay tuned to the Movistar site and social media for news about their six-rider roster.)

The other Australians who have made the provisional start list include 21-year-old Anna Louw of the AG Insurance-NXTG team, Nicole Frain (Parkhotel Valkenburg) and Rachel Neylan (Cofidis).

The Tour de France Femmes avec Zwift will be broadcast live in Australia on SBS TV. (See the network’s site for times.)

The ‘Tour Guide’ is now available in newsagents around Australia and New Zealand. There is also limited stock available from the RIDE Media webshop. Be sure to get your special souvenir edition of this ideal TV viewing companion which includes details of all eight stages and information on all 24 teams.

*RIDE Media respects the request from organisers to use the formal title race, that includes the naming-rights partner Zwift. Without the support of such sponsors the creation of this event would not have been possible. 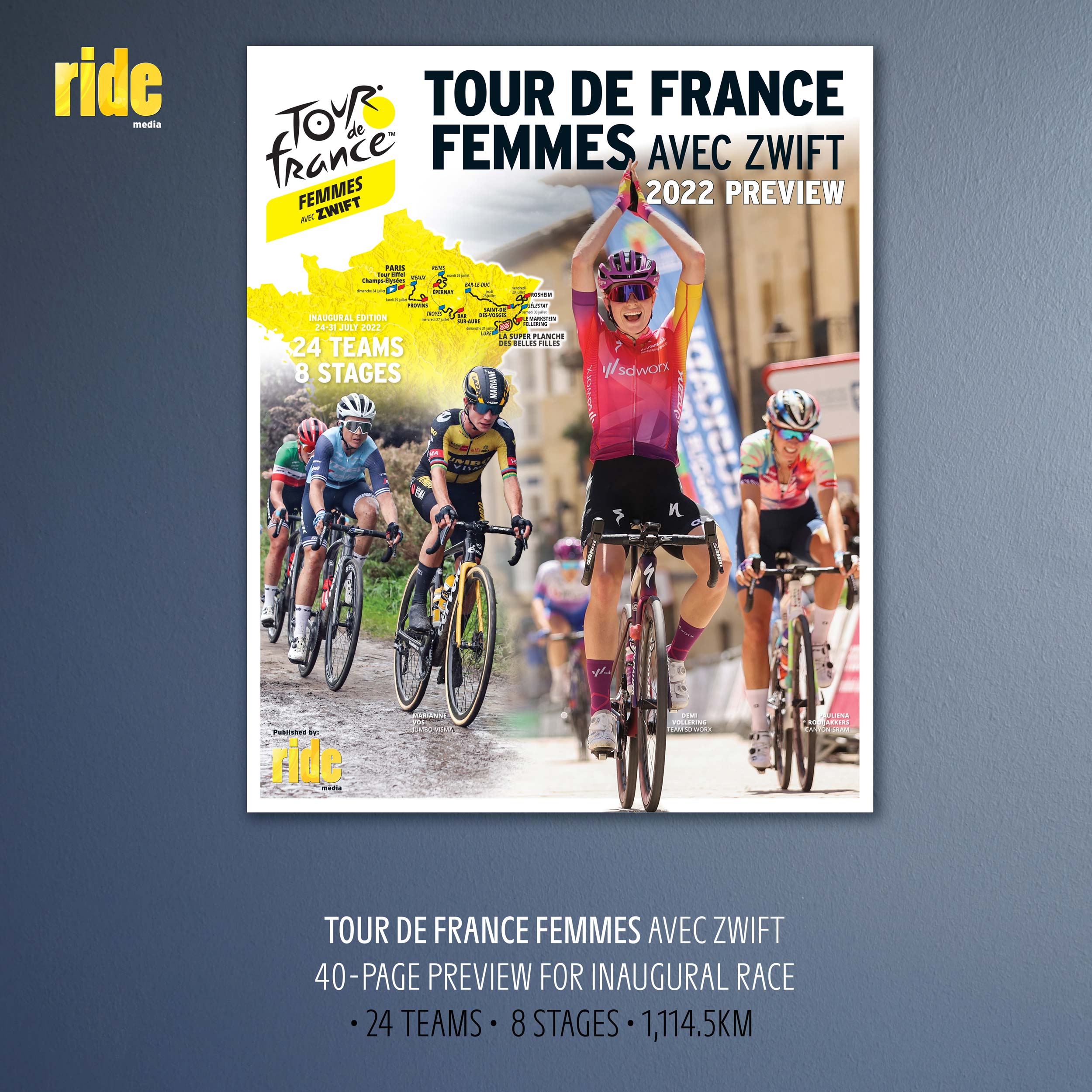