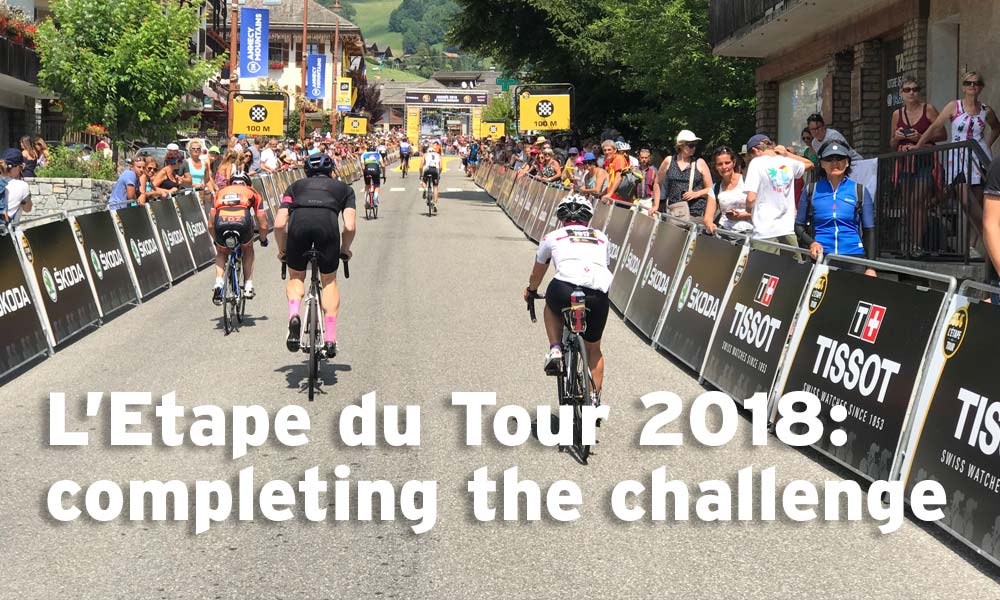 Tourism on Tour: A story from L’Etape du Tour 2018

After suffering through last year’s L’Etape du Tour, Graham Springett vowed never to return. Of course he ignored his own advice and was back on the roads of the Tour a few days ago. Here’s his story of the 2018 edition.

Innumerable pedal revs ago, a teenager with stars in his eyes dreamed of becoming a professional cyclist. Just like any young hopeful, this lad had posters of Tour de France riders on his wall, read as much as he could about the sport – long before satellites and modems brought live coverage to our homes – and talked endlessly about France, Flanders or the Alps.

He rode his bike as much as he could, followed the training advice in vogue at the time and joined a club. And he promptly got smashed to bits in most of the races he started. The dream ended up in the same sorry state, and all thoughts of earning a living as a rider were shelved.

Which, 31 years later, turned out to be one of the best decisions I ever made.

Now, labouring up the Col de la Colombière, the only thing I was capable of reflecting on with any semblance of assuredness was my gratitude that I didn’t have to do this sort of thing every bloody day for three weeks.

L’Etape du Tour has long been a massive drawcard for keen cyclists across the world. It’s long been an ambition of mine to ride one, but living in Australia makes it much more of a logistical pain in the backside than if I had been a bit more organised and attempted it while I still lived in London.

And so it came to pass that I had a crack at last year’s L’Etape.

In 2017, it was a long, hot, spectacular, miserable and thrilling day in the Alps that culminated in my solemn vow at the top of the Col d’Izoard: I’m never doing that again.

True to my vow, I lined up in Annecy last week ready for another assault on the Alps. The 2017 edition was one of the hardest days I’ve ever had on the bike and so, obviously, I was keen to repeat the whole experience. 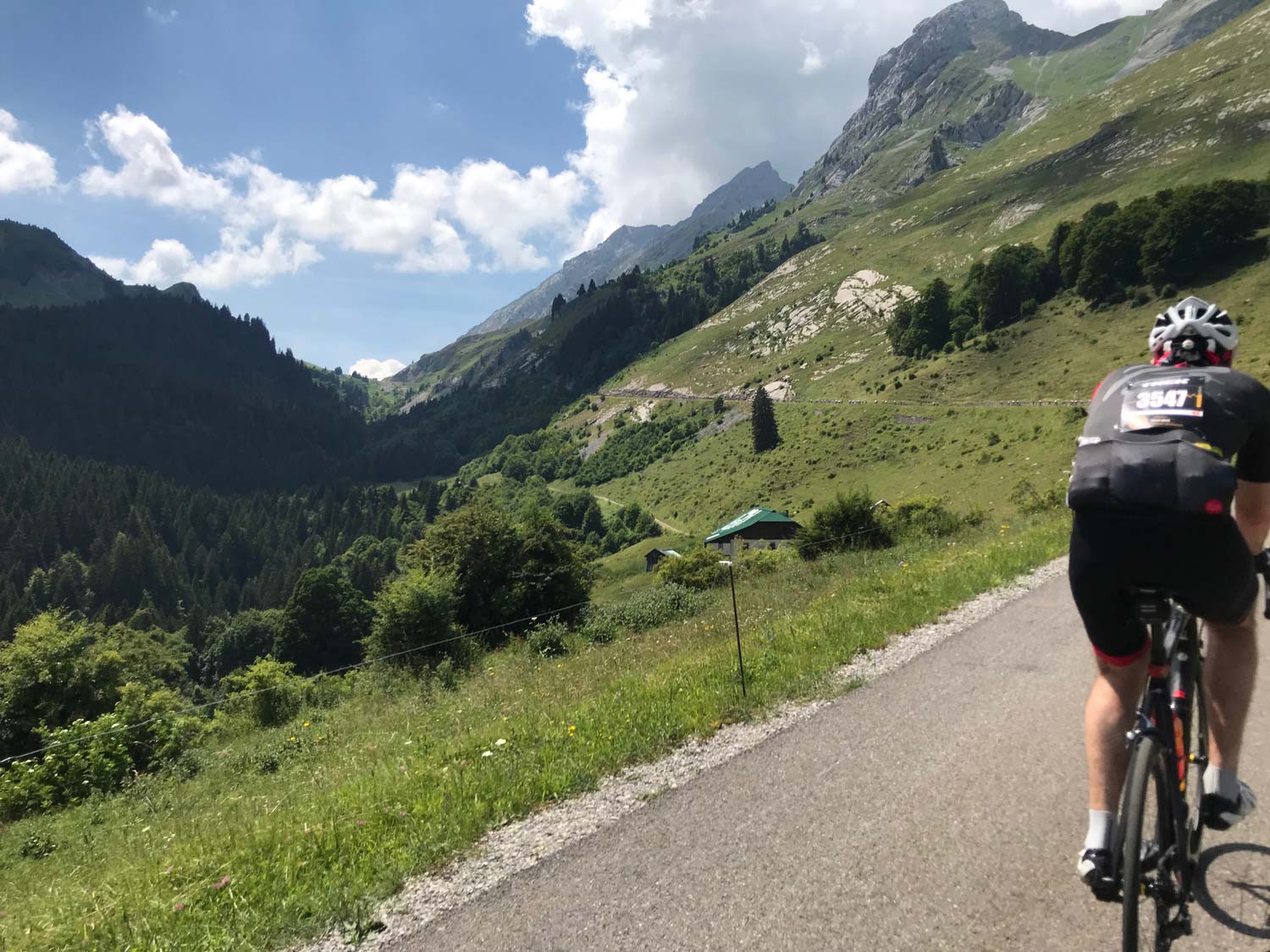 Photos: Graham Springett (from the saddle as he rode…)

This year the route was shorter, slightly, and had four shorter climbs compared with the two lengthier uphill grovels of in 2017.

To add spice to the mix, a section of un-paved road was added to the parcours, ensuring an invigorating climax to thehors categorieMontée du plateau des Glières to complement the rigours of three category-one climbs.

With weather a constant determinant of how much fun lay ahead in the Alps, I took solace in both the sunshine and the cool temperatures of a 7.00am start. The beautiful town of Annecy played the perfect host and, like perfect guests, the riders got off to a rapid start to get away from the city as quickly as possible.

It was cool now but by the time we would be at the tail end at Le Grand-Bornand, we knew the temperatures on the climbs of the Romme and Colombière would be on the miserable side of pleasant.

Speed was of the essence. Thankfully and, somewhat surprisingly, a single diesel engine of a rider elected to sit at the head of an ever-growing bunch and drag us round Lake Annecy at close to 40km/h, catching and passing rider after rider after bunch after bunch.

Rolling turns isn’t a thing here in France, it wasn’t last year, so – instead of doing the honourable thing as any keen participant in regional Australian handicap races would do – I didn’t make any effort to contribute and just sat there enjoying the scenery and played at being Graham Watson with my iPhone camera.

We looped round the south end of Lake Annecy then took a right and up the category-four Col de Bluffy. This wasn’t a hard climb but it was tough enough to see our pacemaker go backwards. I thought about waiting for him, but decided to press on.

The climb was short and I resumed the charge to the first appointment of the day: the Col de la Croix Fry. A category-one climb, it was the not inconsiderable warm-up act for the gulp-inducing HC climb of the Glières.

Thankfully the Croix Fry was a steady gradient and the day was still young, so heat wasn’t a problem. The power numbers were good and I managed to get over without being forced to make more unkeepable vows.

Onwards and, quite literally, upwards to the Glières. This was the main act, the double challenge of a climb reaching 11 percent and topped off with a sprinkling of unmade road at the top.

As I had done last year, I had made an unreasonable request of my short-arm rear mech and fitted a 30-tooth cassette. It had played well with my 34 chainring last year and it was similarly obliging this year. Just as well, as the Glières was a steep beastie which needed suitably low gearing. 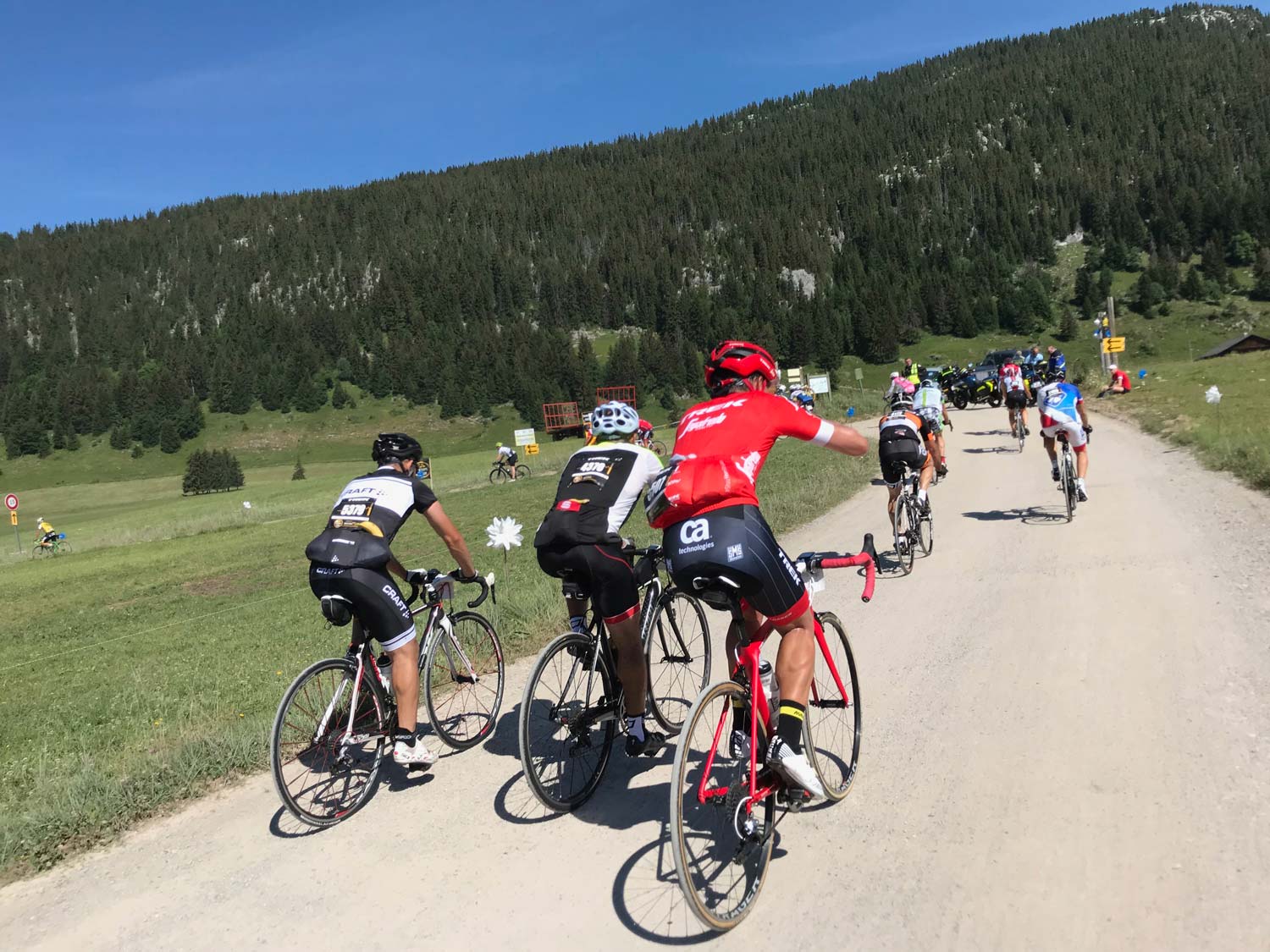 Man and machine in sort of half-decent harmony saw the climb despatched without too much trouble, which surprised me. No doubt the shade and the cooler temperatures of the day worked in my favour as I winched myself upwards, mindful not to overdo things.

If there’s one thing which will remain with me about riding the Etape in 2017 – and it’s clearly not going to be the misery of climbing slowly in hot weather, as evidenced by my very presence here again – it’s the number of people who are happy to stand or sit at the side of the road all day and cheer Joe and Joanne Average on as they play at being Tour de France riders.

Countless bystanders yelled ‘Allez’ while others yelled sentences which my rusty French and my focus on the patch of tar ahead of me conspired to render incomprehensible. Others had various noisy accessories which they were employing vigorously to create a wonderfully distracting atmosphere.

However, there was still the gravel section to negotiate. Much had been made of this section and many people I had spoken to prior to the ride had expressed concern about making it through the rough without a crash or mechanical. Come the day itself and the section was the very essence of hype – much ado about nothing.

The road had been given a bit of TLC and, although there was gravel, it was the most benign dirt road I could’ve hoped for. It offered little in the way of a challenge; all it could muster was a layer of dust on my forks.

The dirt ended with a whimper and the descent began.

And lasted all of about 50 metres before a very unwelcome pinch of a climb put the hurt on again. It was only short, but it made sure that the Glières left us all with something to remember it by.

Although things were beginning to get a bit hurty, I was doing my best to manage my resources, mindful of the remaining distance to cover – 87 kilometres. With two of the day’s four climbs done, there was something of a respite of flat ground to cover, albeit punctured by the entirely unforgettable Col des Fleuries.

Fortunately, a little later I was passed by a Portuguese rocket who dragged me and a train of grateful followers along at 47km/h. We passed group after group, the pace rarely easing and with small whistles from our train driver to alert riders of our brisk approach. Eventually what I can only assume was his mate called out, and the pace eased. As good as it was to cover some ground quickly, I was digging in and expending energy I didn’t really want to.

But when you’re on a wheel and galloping along, it’s not easy to surrender.

The followers bunched up and we settled in to a more relaxed and social bunch. Barely touching the pedals, I was as ready as I would ever be for the last appointment of the day.

By now the heat was pressing down and would do so even more as the Col de Romme rose higher and higher. A brief feed station stop to refill water bottles, pop in an electrolyte tablet and I was off.

My pace had slowed markedly compared with earlier in the day but I was determined to keep searching for a rhythm. The fun of the day had just about evaporated and now it was all about focusing on getting to the finish.

After what seemed like three days I crested this climb and enjoyed a small respite before the Colombière. And here is where I had my almost sacrilegious thought. I hadn’t been racing the Tour de France for a week and a bit beforehand, and I wasn’t facing another week and a half of more of this. But I was feeling spent, suffering in the heat and trying desperately to keep a rhythm.

Thank goodness, I mused, that I was too crap to ever get close to a first category race licence, let alone a pro career.

The road veered to the right and there before me and to my left I could see about two kilometres of ribbon clinging to the mountainside, punctuated by innumerable and tiny cyclists ahead of me. If there was a time to crack, this was it. Ignorance can be bliss, but here I was being shown precisely where I had to ride and the prospect filled me with dismay.

On and on I plodded, the head unit of my computer laughing at me with its low power numbers on the display. I had to stop. I didn’t want to, I wanted to keep going. But the legs had other ideas and they were ruling the roost today.

I stopped in a shady spot, removed my helmet and slumped over the bars, not beaten but certainly on the ropes. This wasn’t ever going to be the end, and I certainly wasn’t going to walk.

I paused, took in the scenery with a more appreciative eye, then put my helmet back on and checked over my shoulder before clipping in.

It’s amazing how much relief a brief stop can provide, and I was feeling slightly more human.

The heat and the gradient would alas chip away at that feeling of restoration, but it was restored slightly by a new stop and another pause to take in the scenery.

Again slightly revived, I winched my way to the top. If a slug could ever ride a bicycle, I suspect a bystander would mistake it for me on this day. But I kept going, one of a sea of riders creeping along glacially in the searing heat.

We were as a vanquished army, plodding grimly to the summit.

Finally, the feeling of elation on reaching the top was muted almost to indifference by the fatigue I was feeling, but the prospect of the ensuing descent gave cause for a smile.

Ahead lay 15 kilometres of descent before a short and flat run to the finish in Le Grand-Bornand.

While this would be a nice and easy part of the event, it would still be vital to remain focused so as not to come a cropper on the delightfully smooth and therefore dangerously quick hairpins. And feeling hungry isn’t a good contributor to alertness.

Fortunately I had a gel left over and that restored my vitality almost instantly. It was without doubt the most enjoyable gel I had ever tasted – just don’t ask me to remember what flavour it was.

Soon the finish line lay ahead and the roadside crowds were as thick as you might expect to see on race day.

Some chose to sprint, others rolled over the line nonchalantly.