Fresh off five days of racing at the track cycling national championships in Brisbane, we take a quick look at some of the equipment highlights in a year when chainrings are growing in size and handlebars continue to shrink… 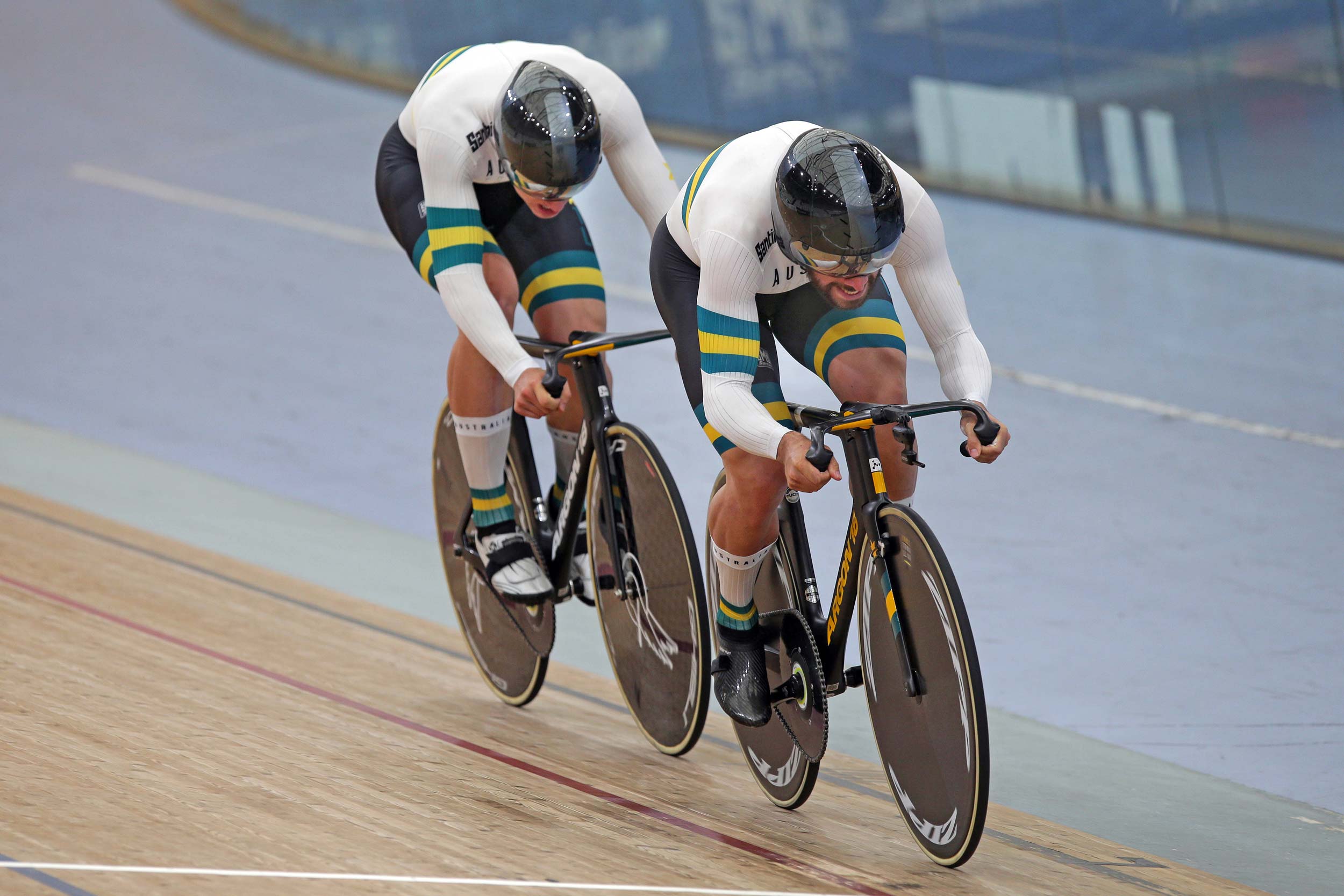 The photos tell much of the story and, as happens in (what we hope will be) an Olympic year, there’s plenty of experimentation being done by track cyclists who are testing new equipment in the hope of going faster more efficiently.

It’s no secret that the Australian Cycling Team has been meddling with tradition in recent months; it’s what you’d expect when there is meant to be a rendezvous in Tokyo for the Games that are expected to start in just 116 days.

Big chainrings have been applied to track bikes and they are matched to larger rear cogs with the quest to not just achieve a gearing that, only a few years ago, would have been considered ridiculously large. There is also a desire to have better chain efficiency in the hope of saving a few watts wherever possible.

These days, team pursuits are being ridden with over 120-inch gearing. And, as Luke Plapp explained back in February, the national team (and associated riders) are experimenting with 70-tooth front chainrings. 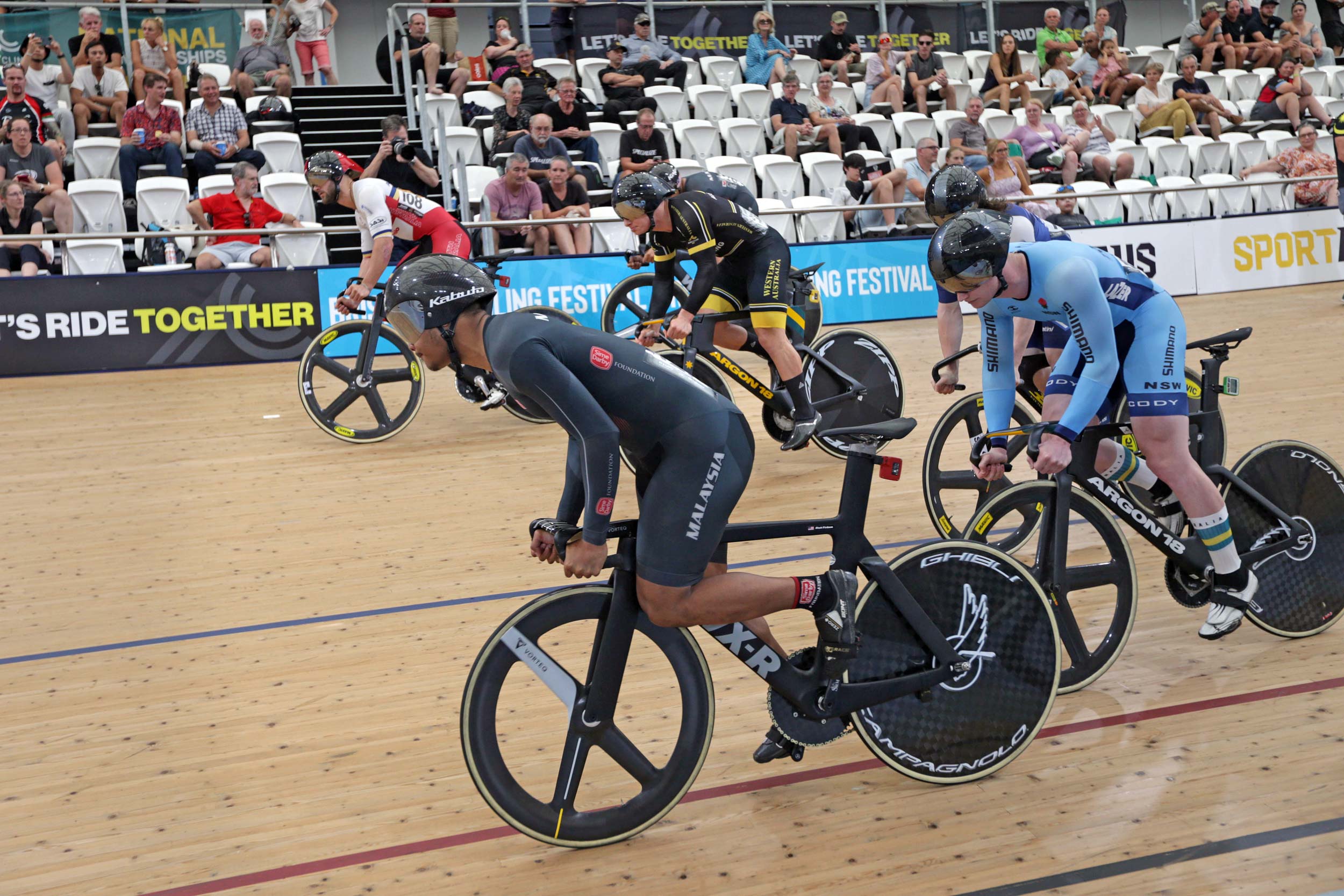 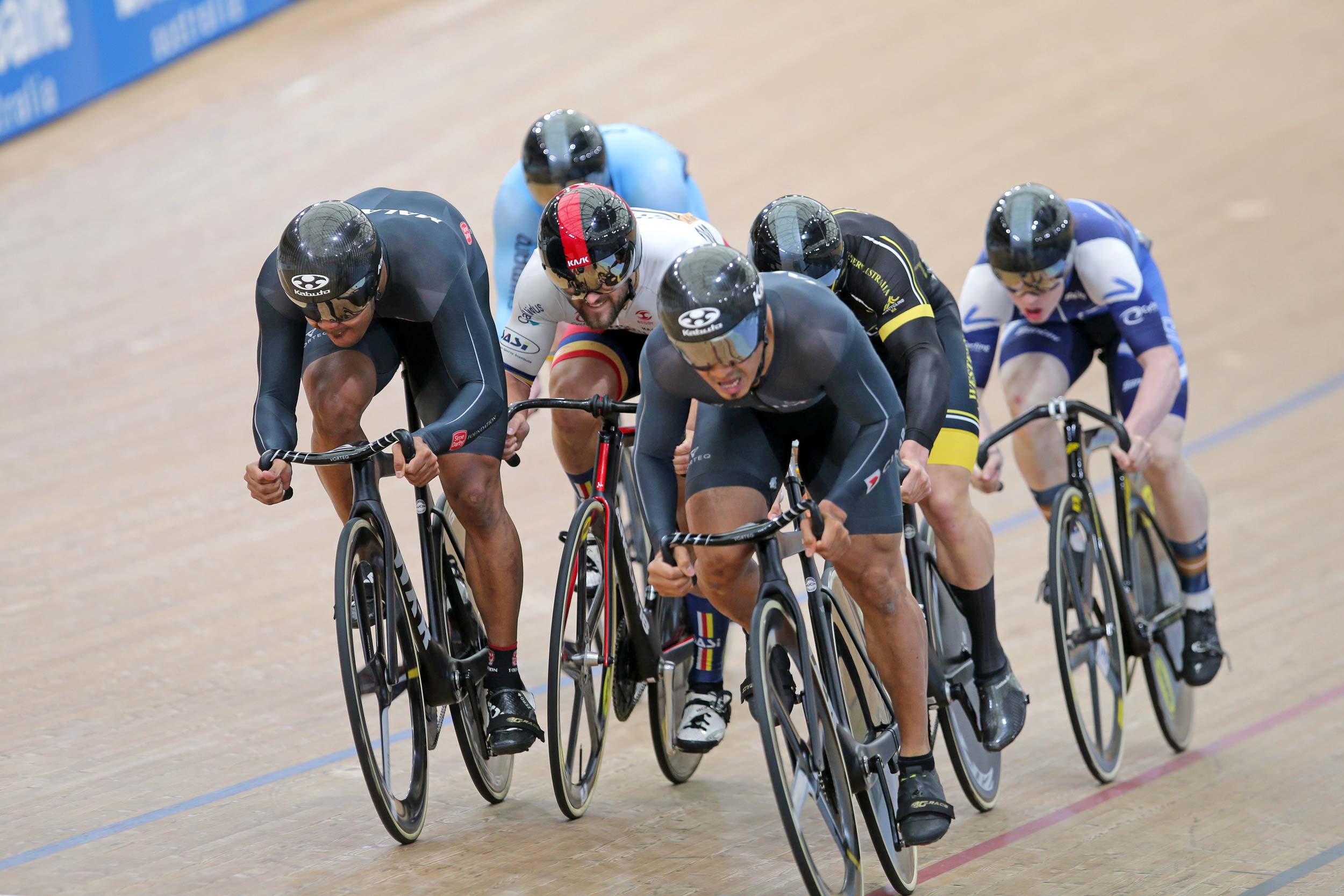 At the track nationals (24-28 March), there were a few international riders also in the mix and the large chainrings are, evidently, not exclusively used by the Aussies. In the elite men’s keirin, for example, two Malaysians topped the results: Muhummas Shar and Mohd Azizulhasni Awang scored gold and silver ahead of the newly crowned Australian champion, Matthew Richardson.

Are they 70-tooth chainrings we see on the Malaysian bikes? Or larger perhaps?

Maybe you’re too distracted to count because you’re looking at the handlebars or the curious pattern of the four-spoke front wheel? 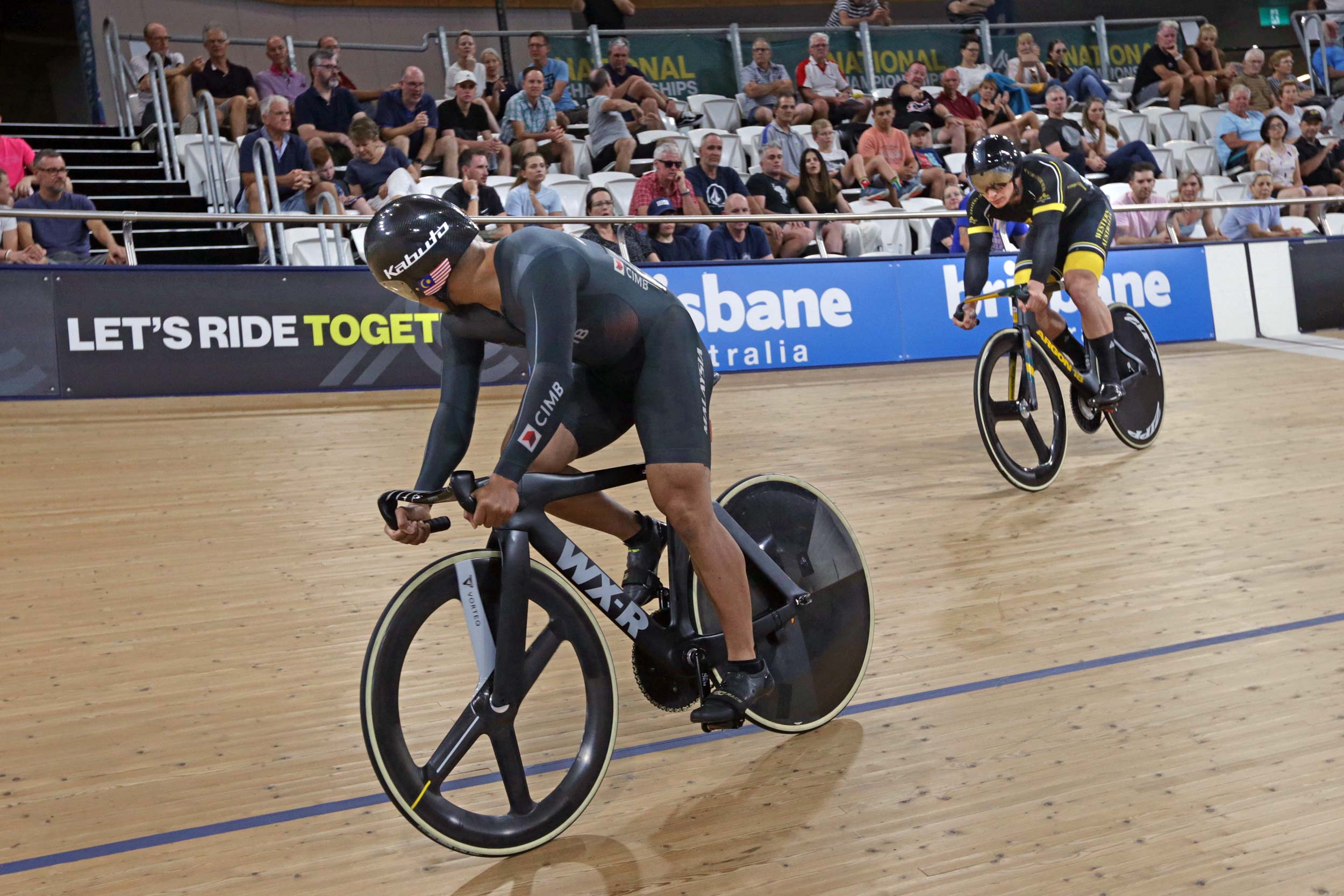 The shrinking nature of handlebars – particularly in track cycling, but not exclusively so – has been a talking point when it comes to equipment innovation for years. RIDE Media has documented the evolution for over a decade and, at the nationals in Brisbane, it seems that riders are still willing to push the envelope and race with handlebars that are not just getting narrower, but also have a far shallower drop. 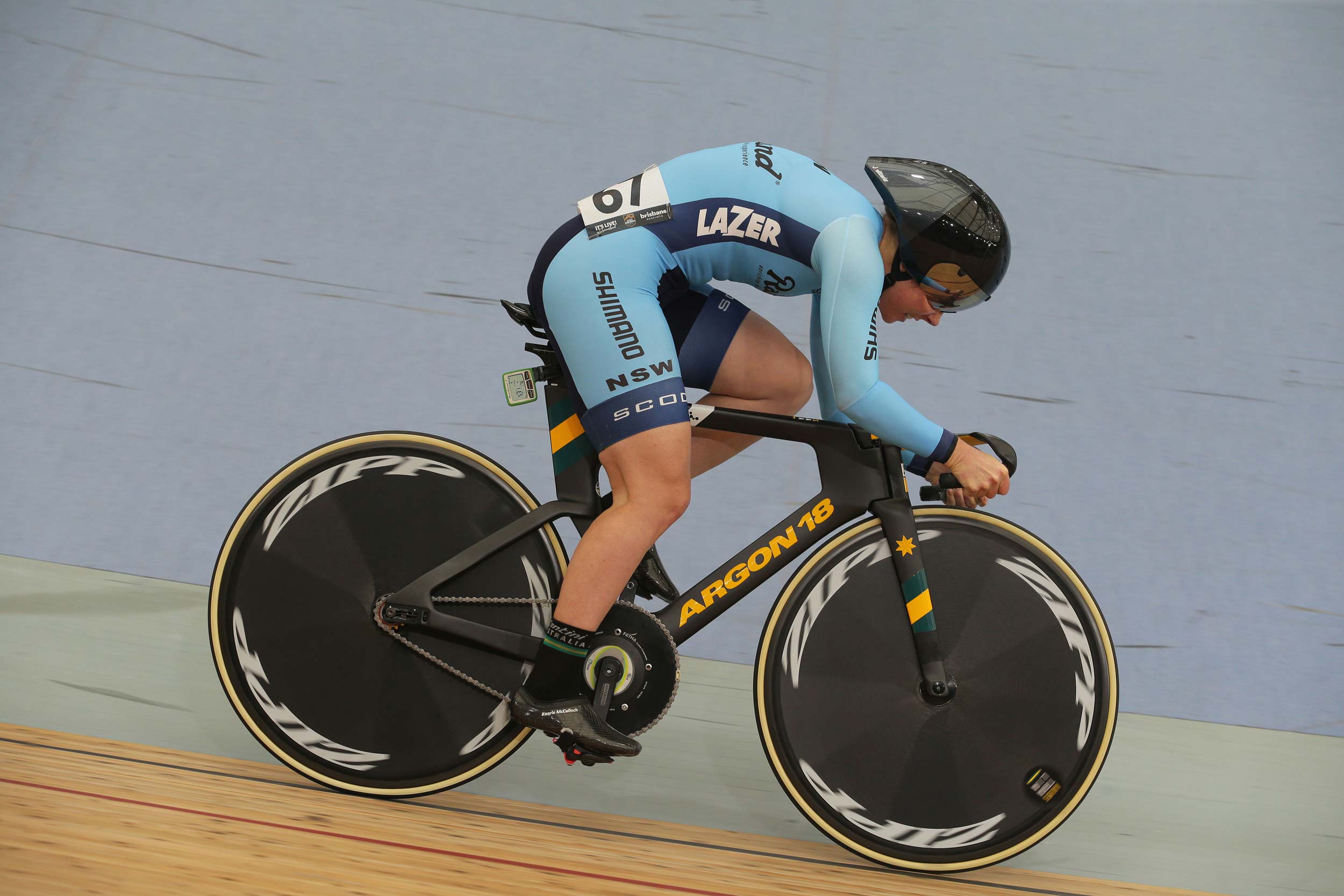 With thanks to the work of AusCycling’s contracted photographer for the five days of racing, John Veage, we present a few images to showcase some of the equipment experimentation that was on display at the Anna Meares Velodrome in Brisbane. 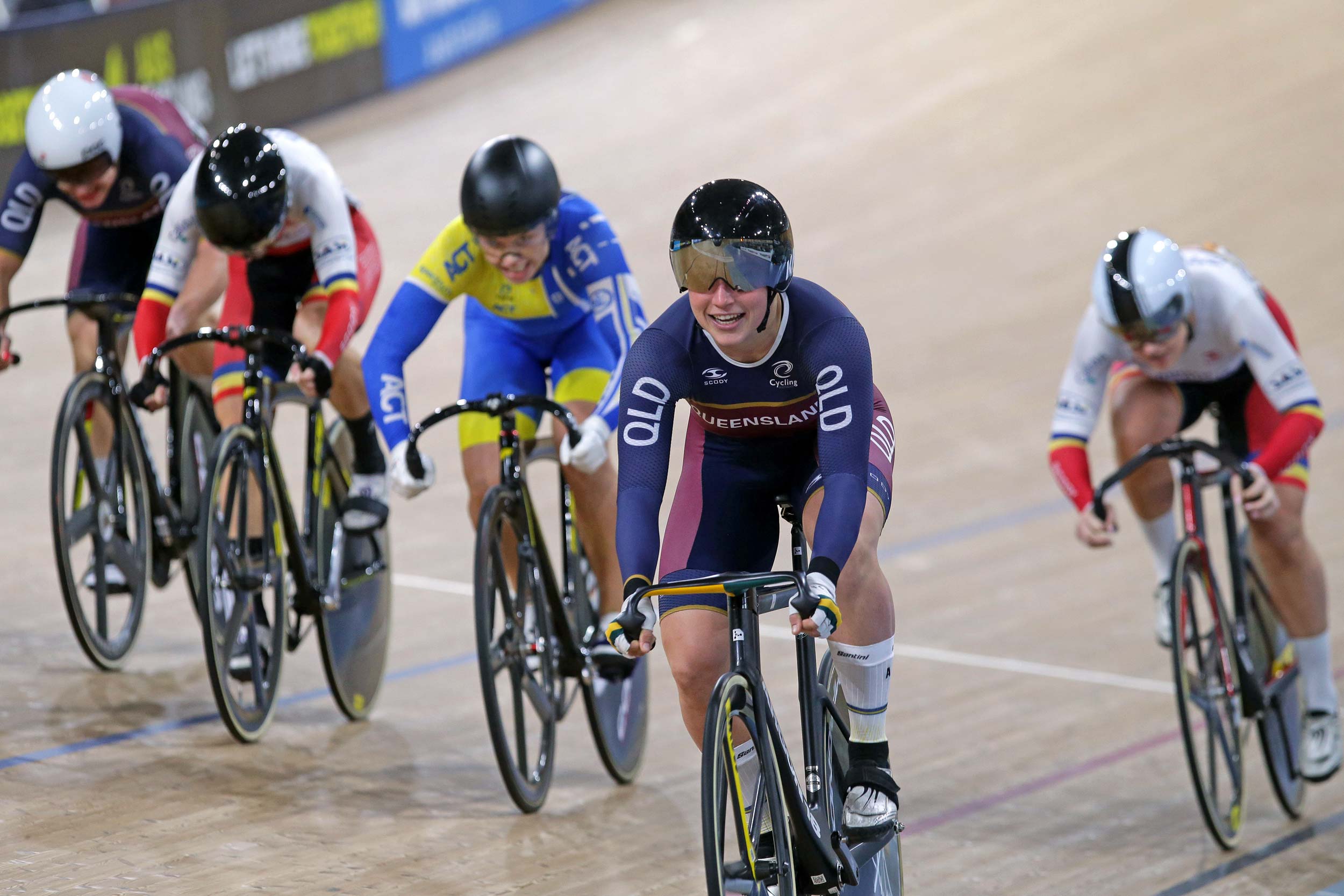 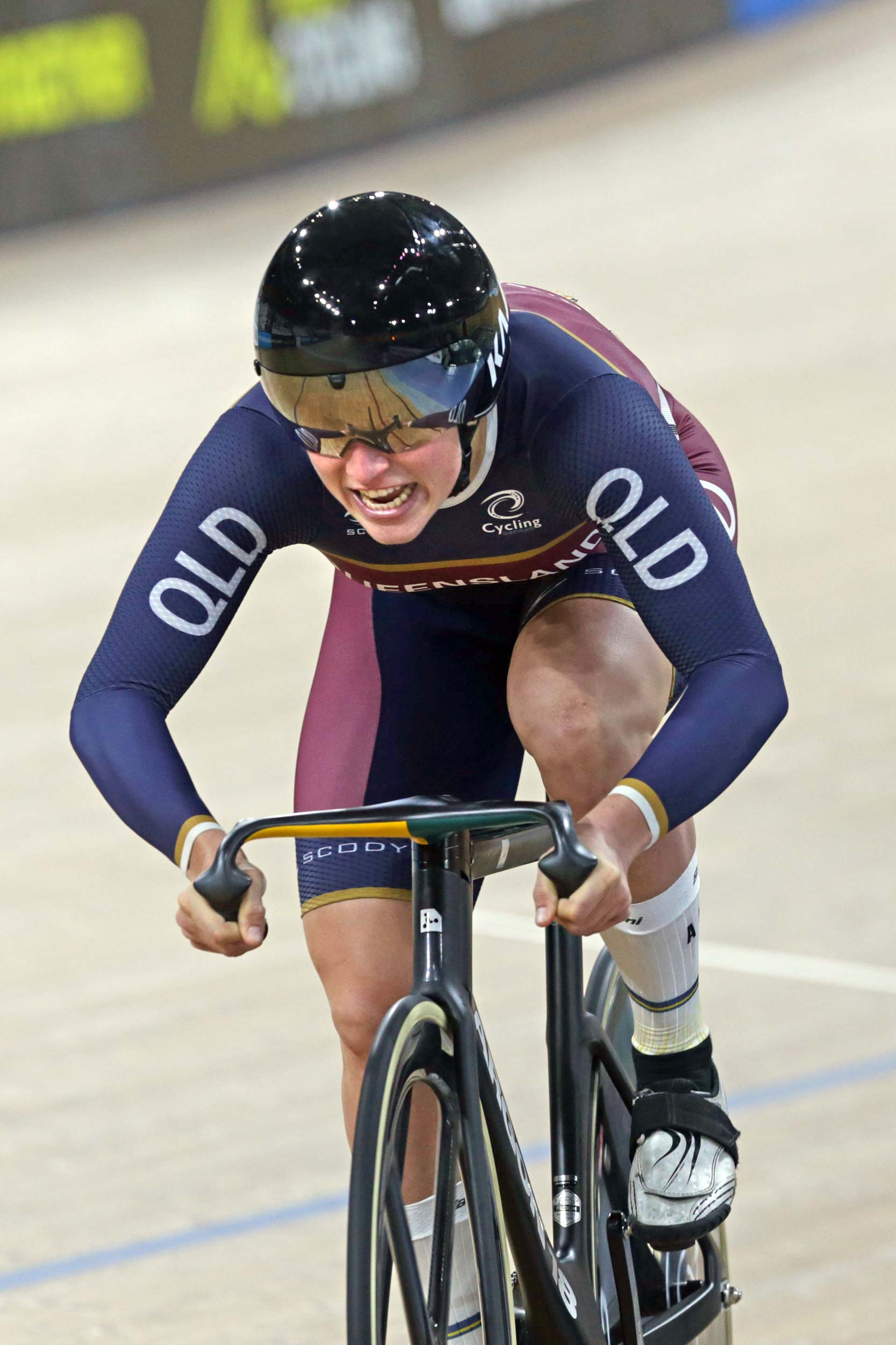 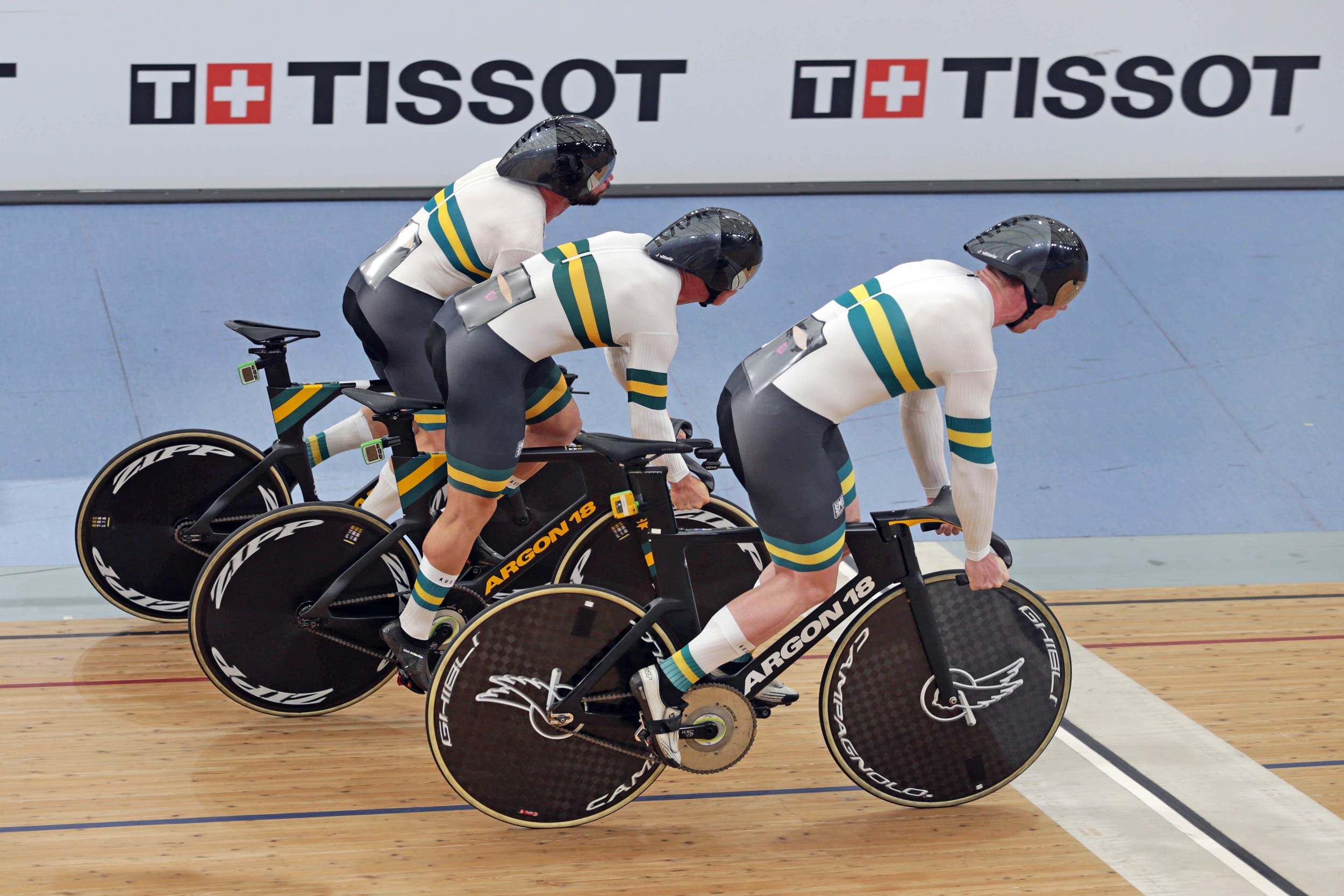 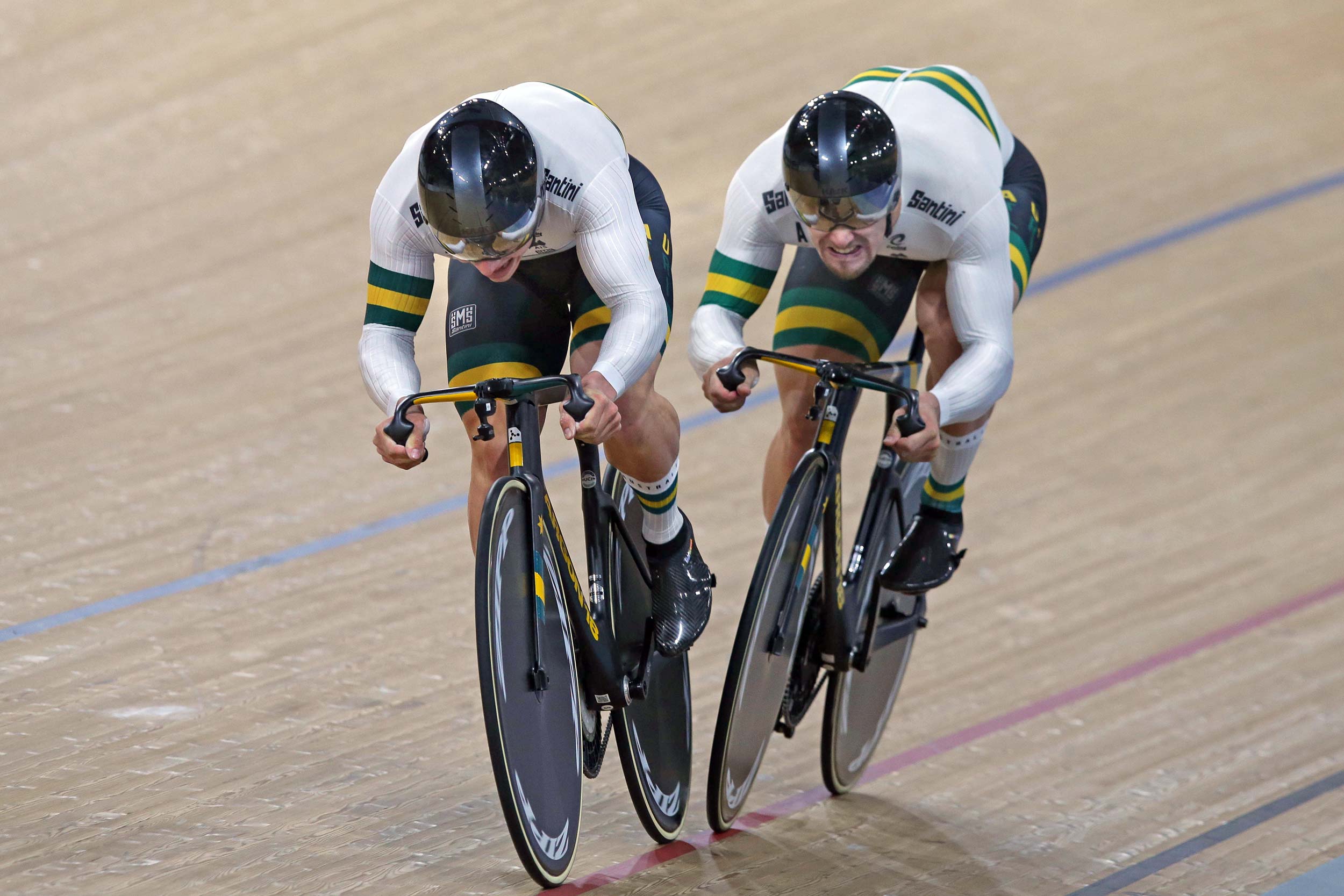 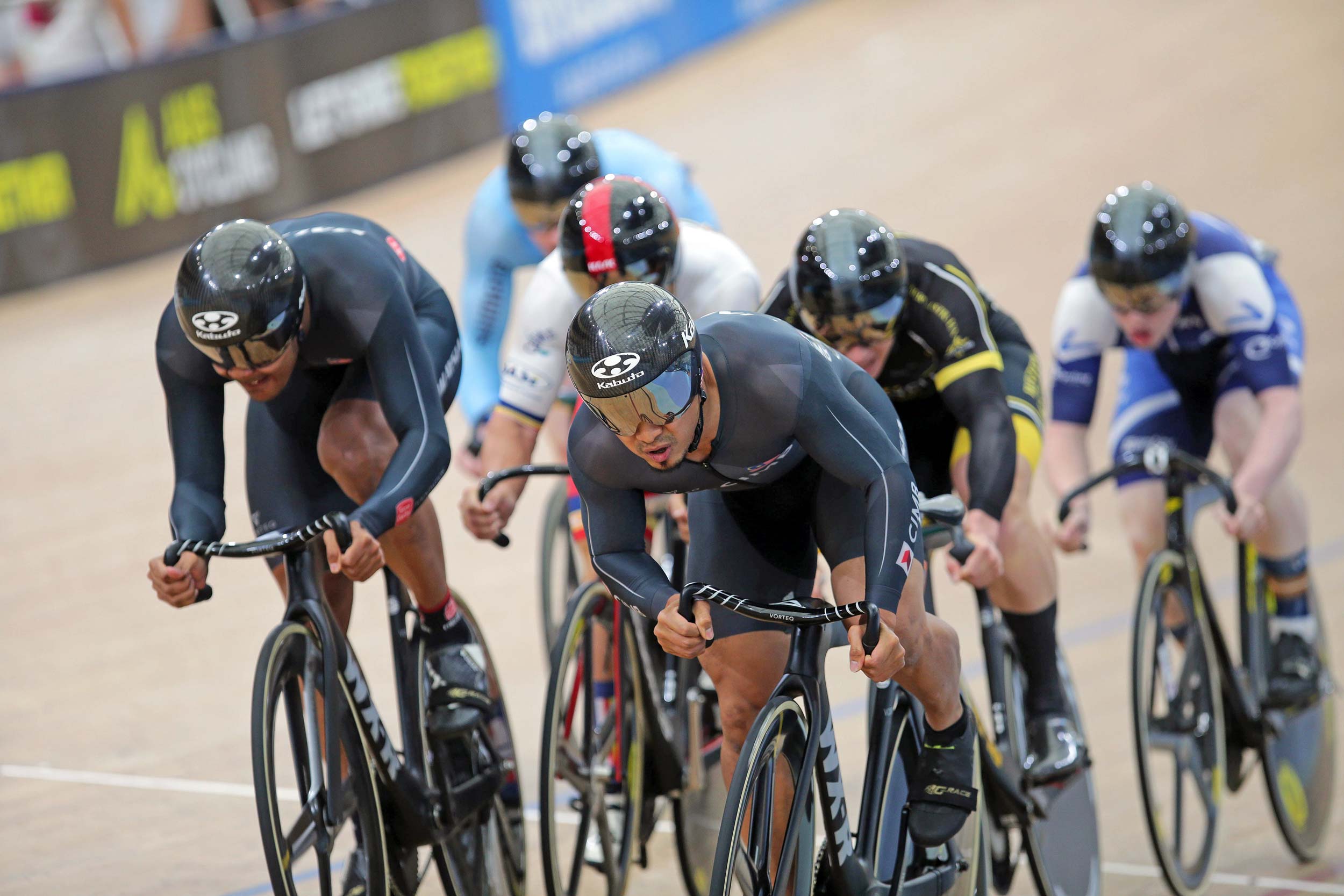 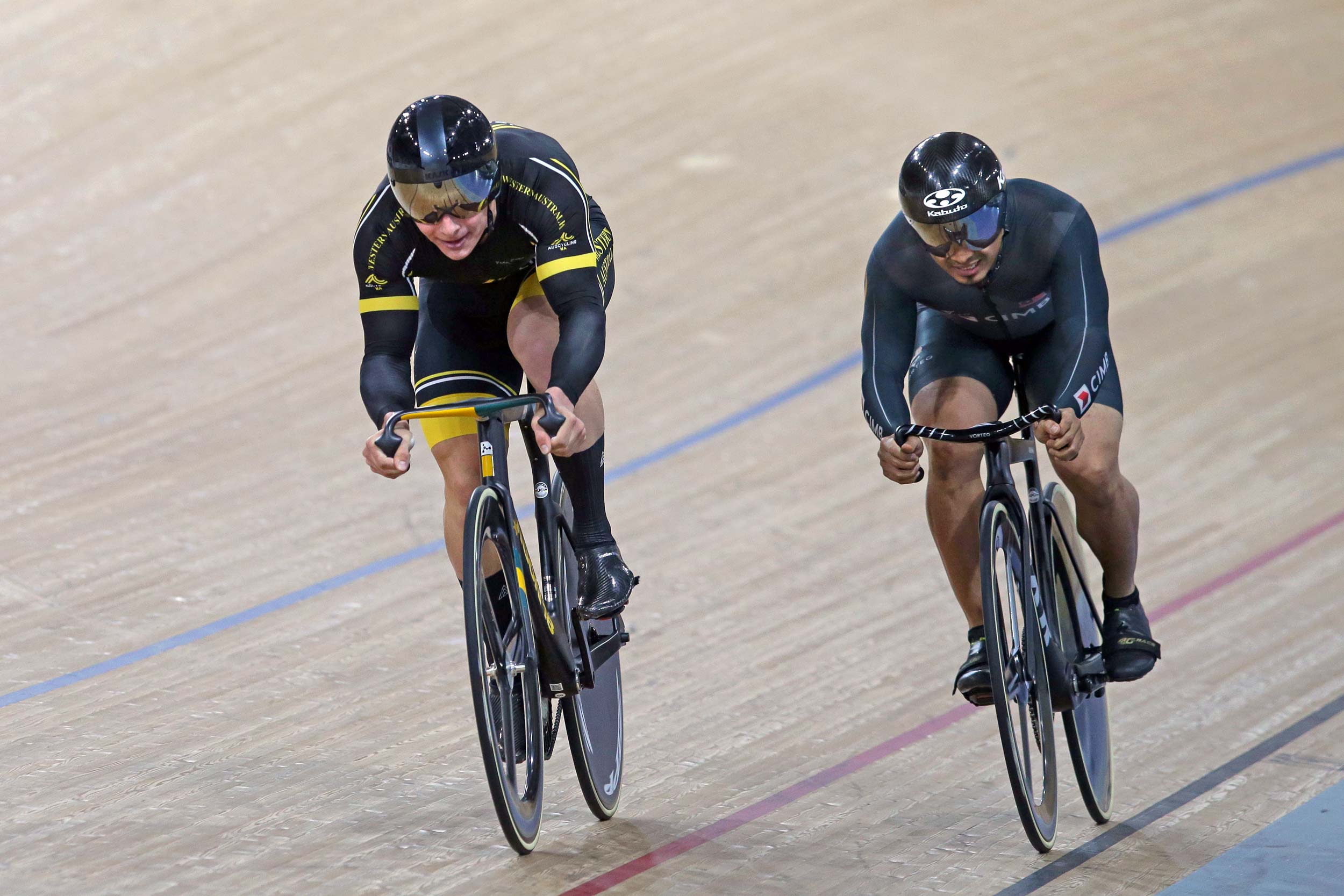 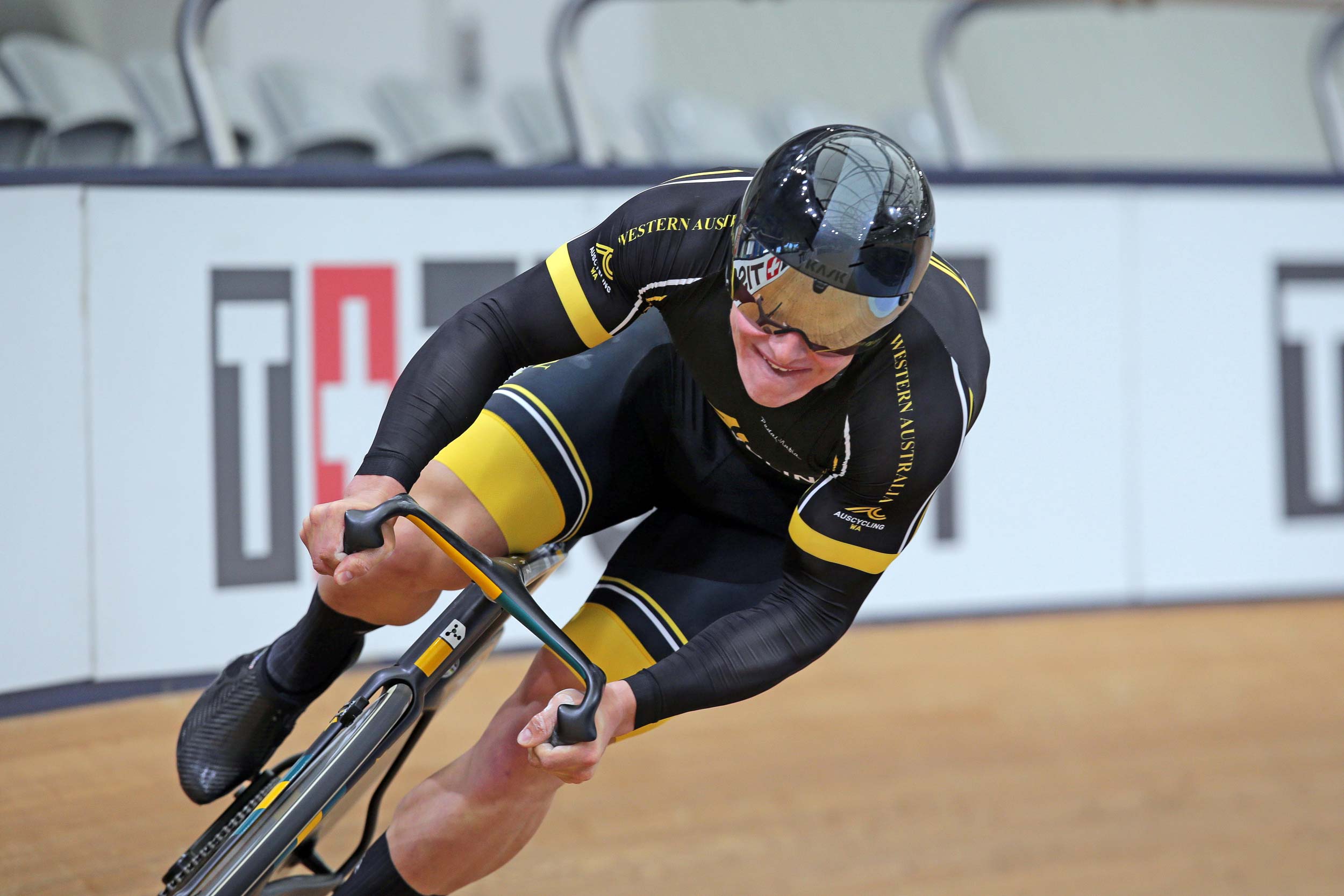