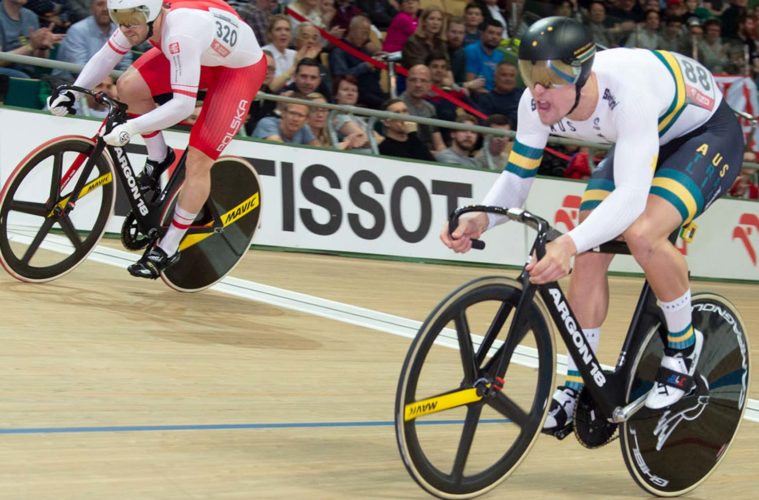 With a haul of six gold medals, three silver and two bronze – plus a world record – the Australian Cycling Team can be very proud of the Pruszkow campaign. Here is a little overview of the equipment used and why some non-sponsor brands are used in 2019.

“If we could change bikes, we’d win a few seconds.” This is a statement made in March 2018 by someone with a strong association with Cycling Australia. By June last year, a long-term arrangement with Bike Technologies Australia (BT) was being wound up; the Australian national track team would soon be racing different bikes.

By the first major championships, there were already significant time gains… enough, evidently, to be the fastest in the world – ever.

Commonwealth Games 2018, team pursuit… world record! Who’d have thunk it possible? A 4,000m team pursuit in 3:49 – yep, a crazy time once considered unobtainable… and now, a little less than a year later, it has been eclipsed. Last week, the Aussie men rode 3:48.012 – and track racing provided a little buzz for cycling fans.

They did “win a few seconds” during the early partnership with the new bike supplier. The team pursuit time is a fine example how much aerodynamics and technology can influence the result of a bike race, particularly on a velodrome. 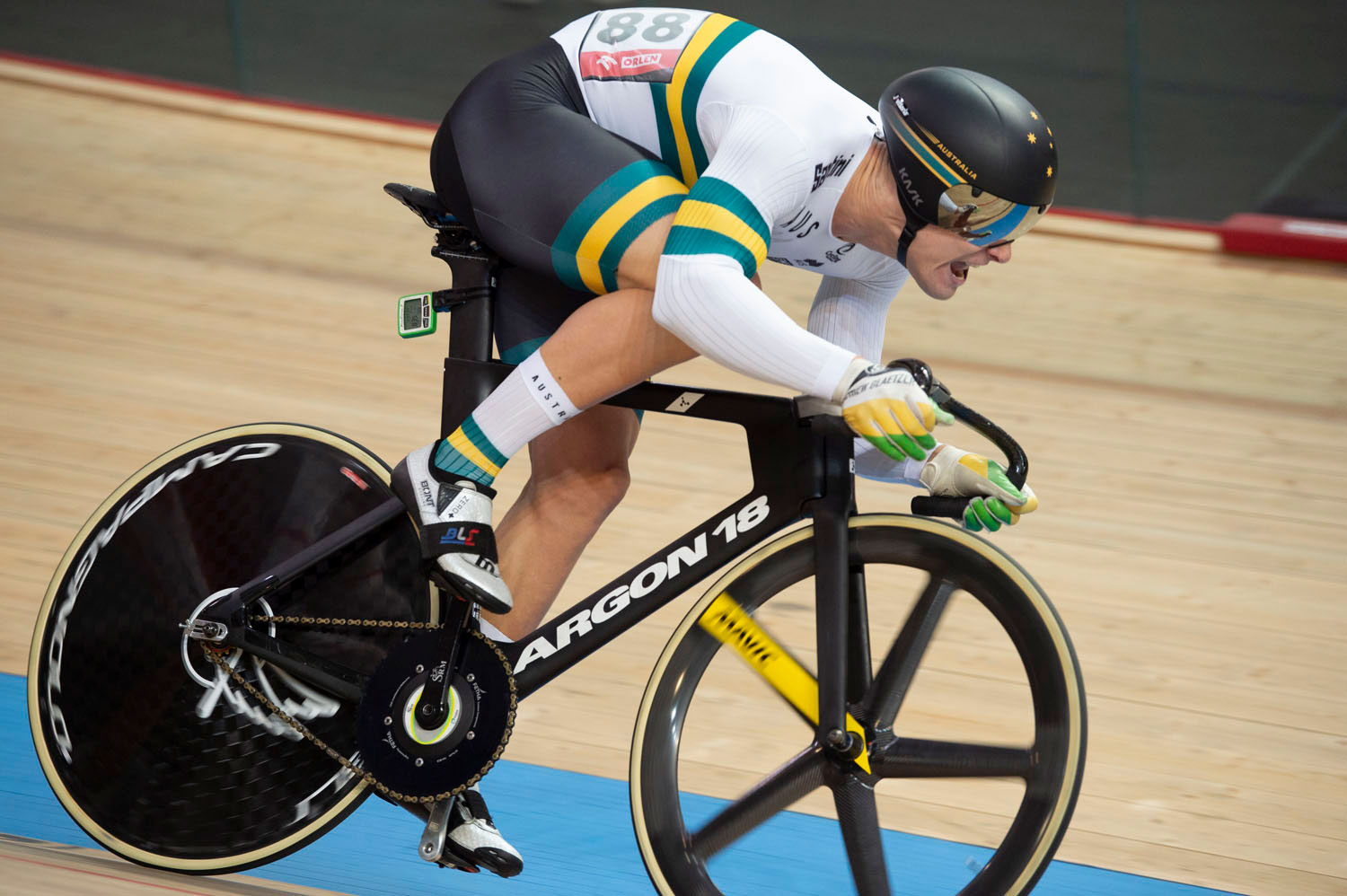 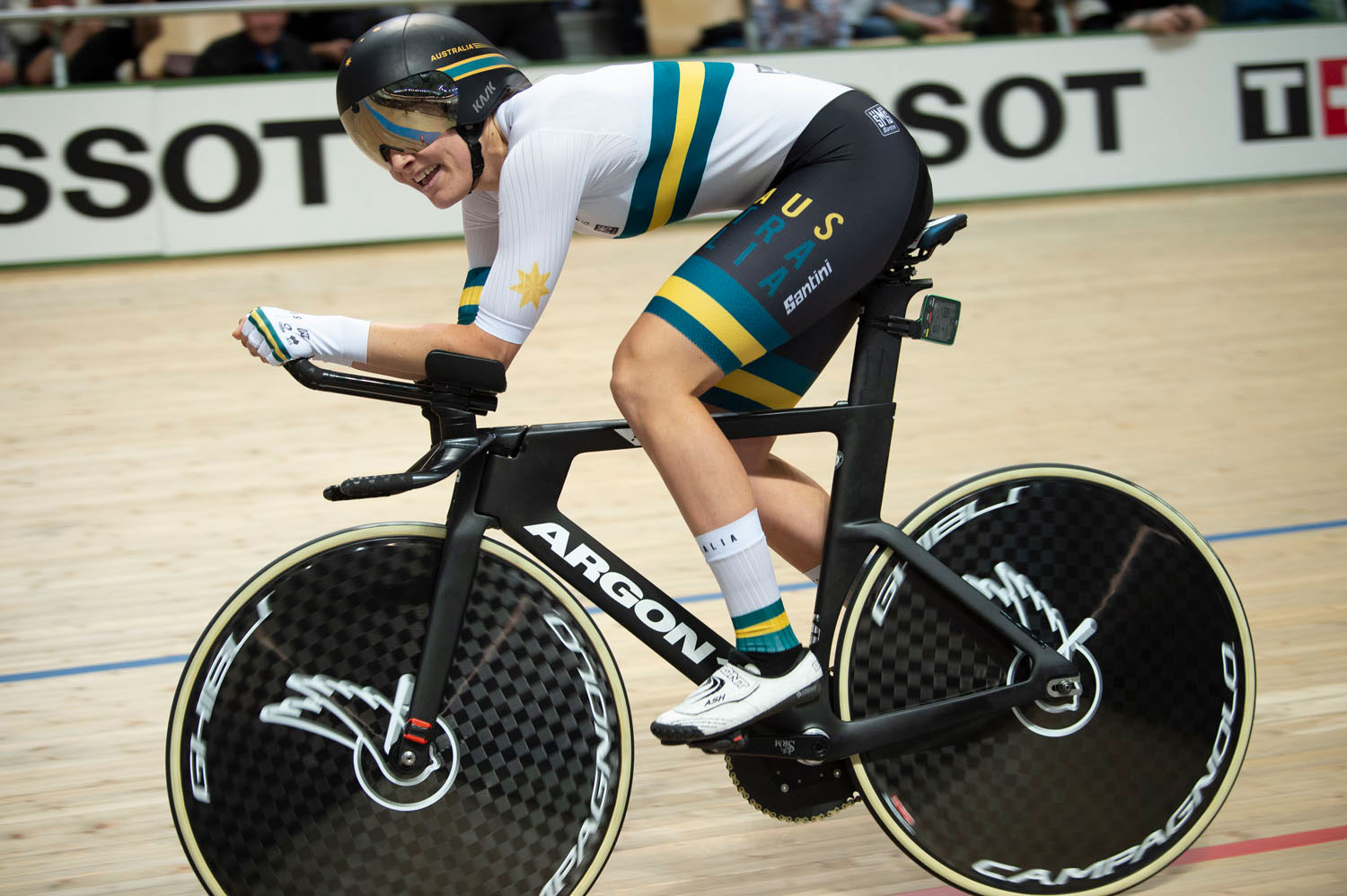 Matthew Glaetzer and Ashlee Ankudinoff (above) put the Argon 18 bikes to use in Poland. Note: Ankudinoff had just won the IP when this photo was taken… she is captured by Casey Gibson between full aero tuck and celebration…

“Many riders have raced their entire careers on a BT bike,” said CA CEO, Steve Drake, in his farewell statement to the Australian brand. By then, testing had already begun on a range of frames from a host of other brands.

“The bike review and new procurement process took place over 10 months,” explained CA spokesman, Tom Reynolds in July 2018. “The first task was to develop a defined set of requirements for a bike partner and then procure that new partner.”

It turns out to be the Canadian company, Argon 18 and although there have been a few world records set early in the partnership with what’s now known as the Australian Cycling Team, there is every reason to believe that there are still “a few seconds” that could be won.

The bikes are, quite clearly, fast – very fast, in fact.

(Of course, the riders play their part but, for the purpose of this story, let’s acknowledge the early successes of the Argon 18 relationship.) 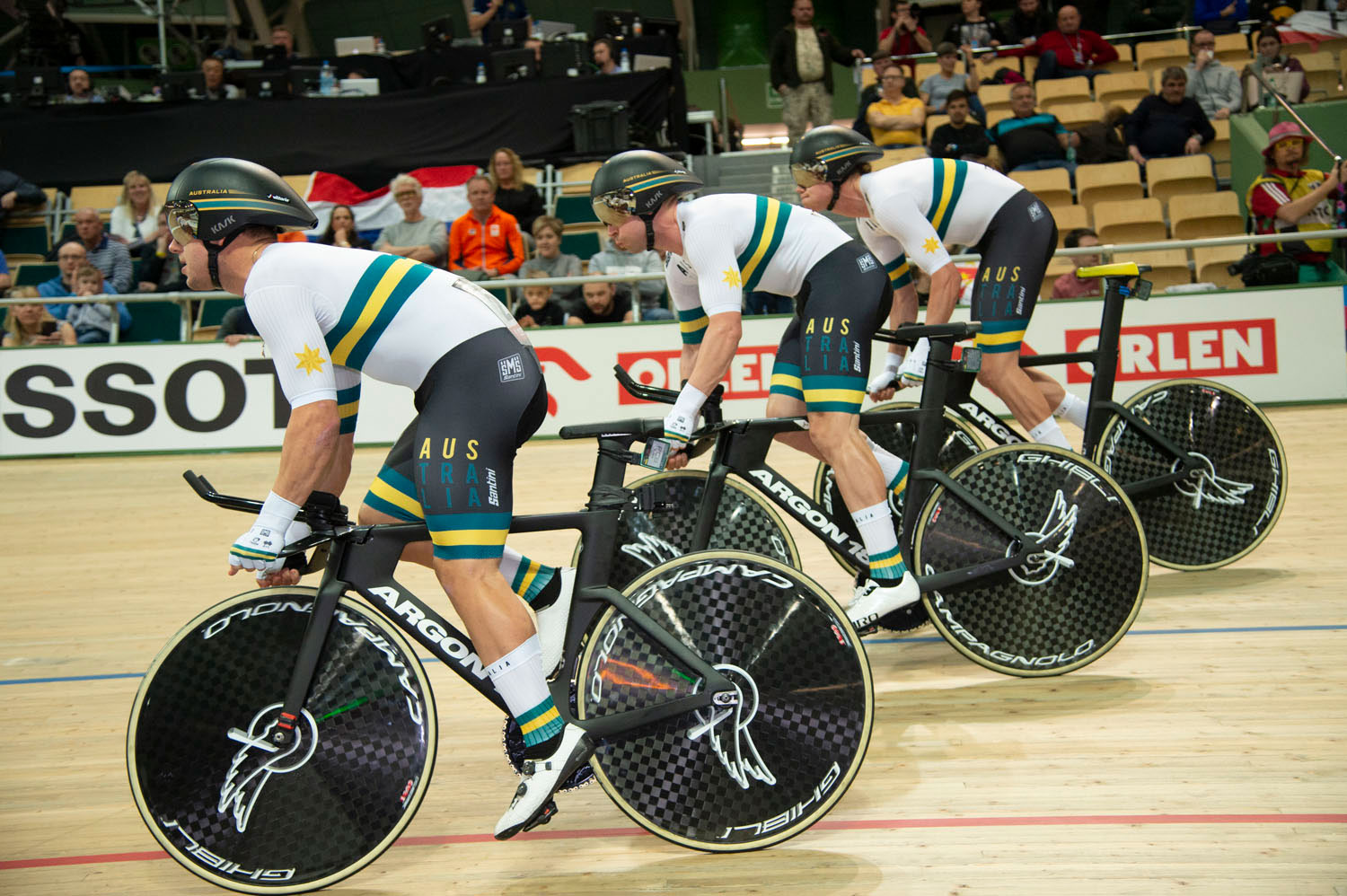 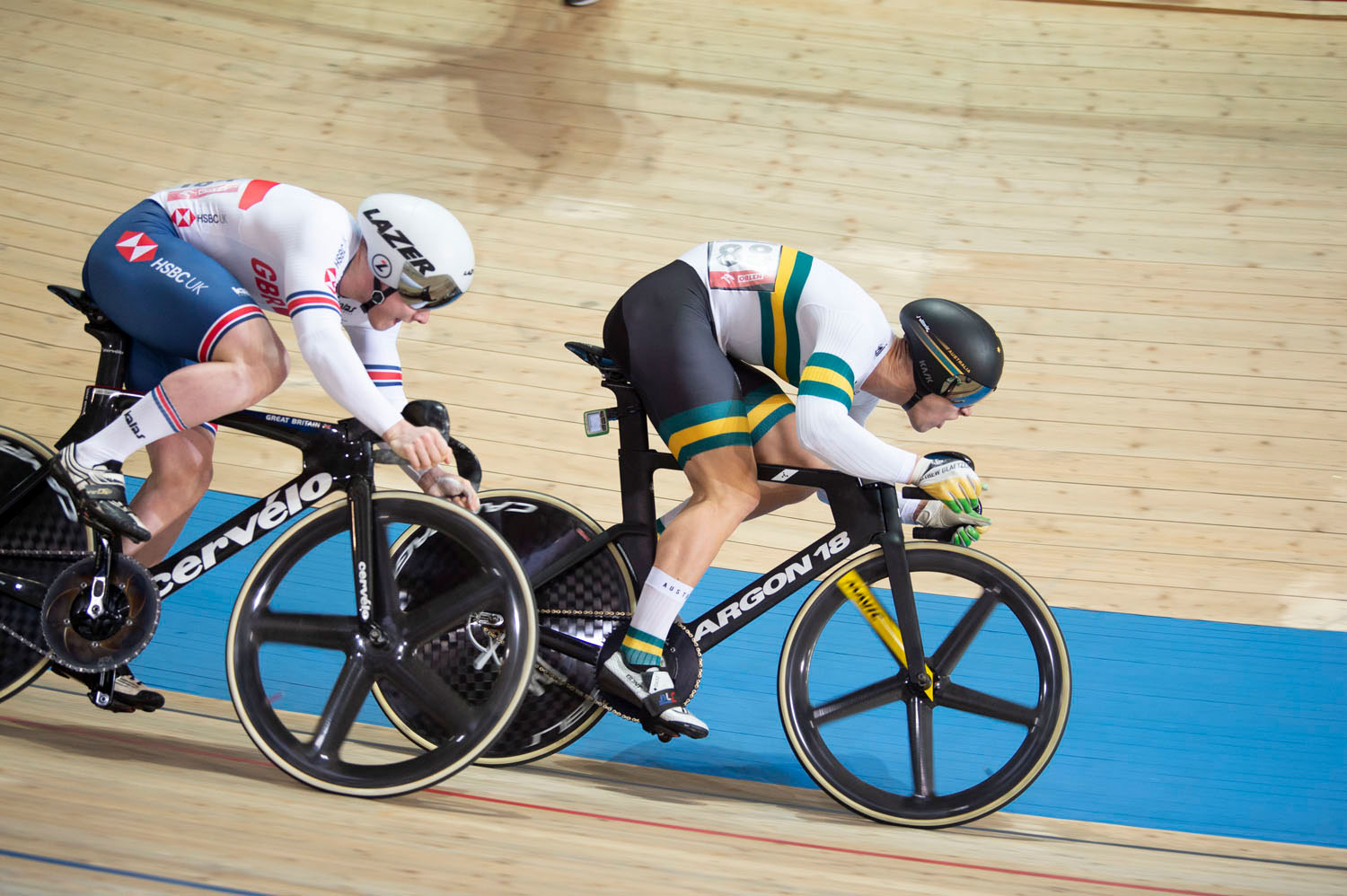 Track riders are using bigger and bigger gears each year: Glaetzer’s sprint chainring is huge but the Brits seem to have even larger ones, this is in keeping with lessons learned leading in to the Rio Olympics where they opted for larger chainrings and bigger rear cogs to improve chain movement and minimise wasted watts.

Simon Jones, the high-performance director, was confident that he could improve the performances of the national team and the results of the worlds in Pruszkow, Poland, this past week suggest he’s right. Winning six gold medals is indeed something to gloat about. But he’s not complacent and there’s still work being done behind the scenes to make Aussie riders even faster.

Pruszkow was good, great even… but Tokyo in August next year is going to be the true test.

Four of the gold medals won by the Australians last week were done in timed events: team pursuits – men and women, plus the individual pursuit (won by Ashlee Ankudinoff) and the team sprint (won by Kaarle McCulloch and Steph Morton). In other words, they are events where seconds count and watt savings make a real difference.

Gone are the days, however, when nations could build bikes and largely ignore the expense. That was the approach of the Brits for many years when they created custom bikes (and components) and apparently put them to market should anyone want to buy them. It was a laughable arrangement but one they got away with for many years.

To ensure they had the upper-hand, the Brits apparently made their products available for purchase (as is stipulated by UCI regulations: all racing bikes must use equipment that is commercially available)… albeit it at a ludicrous price. 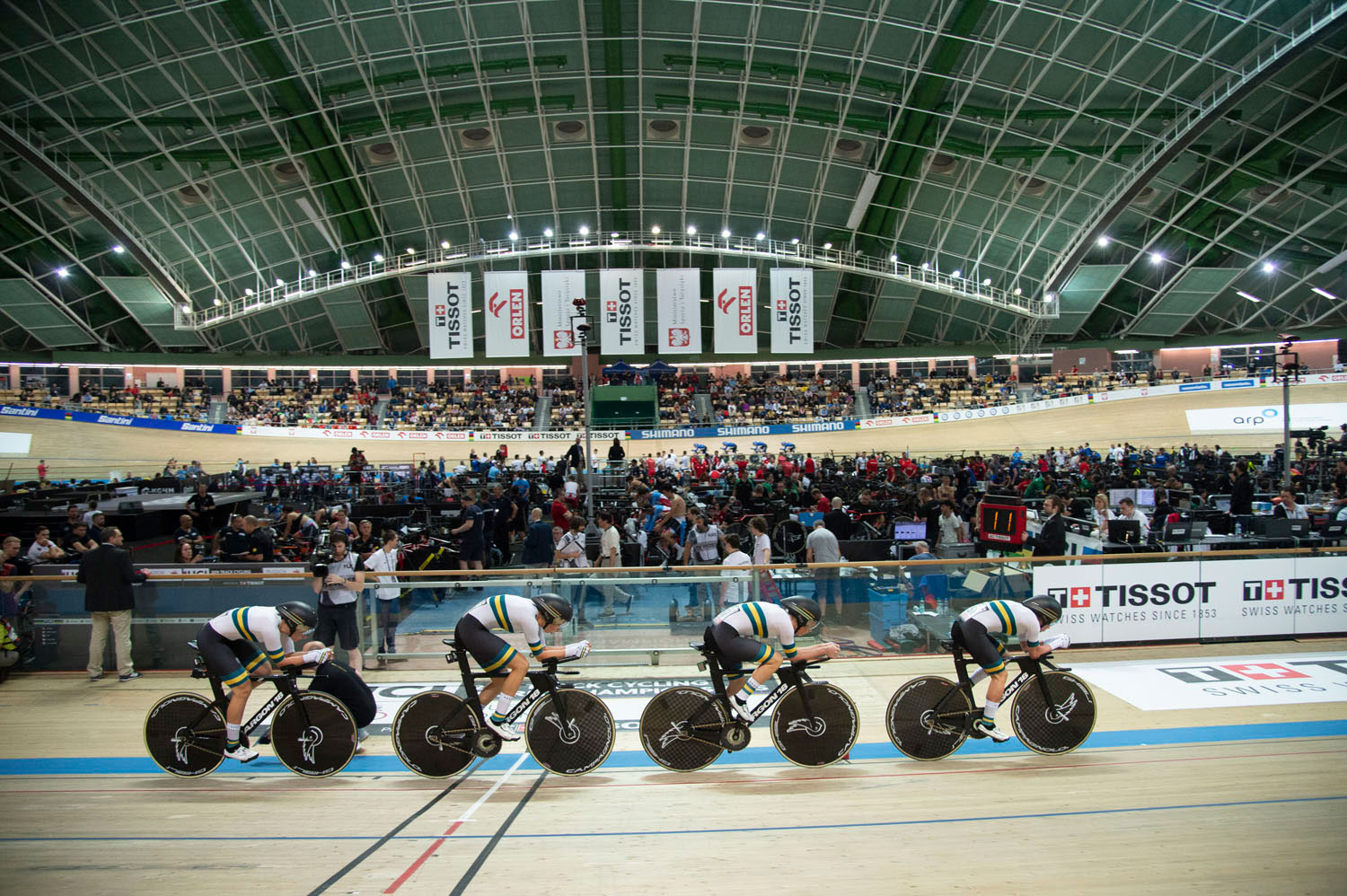 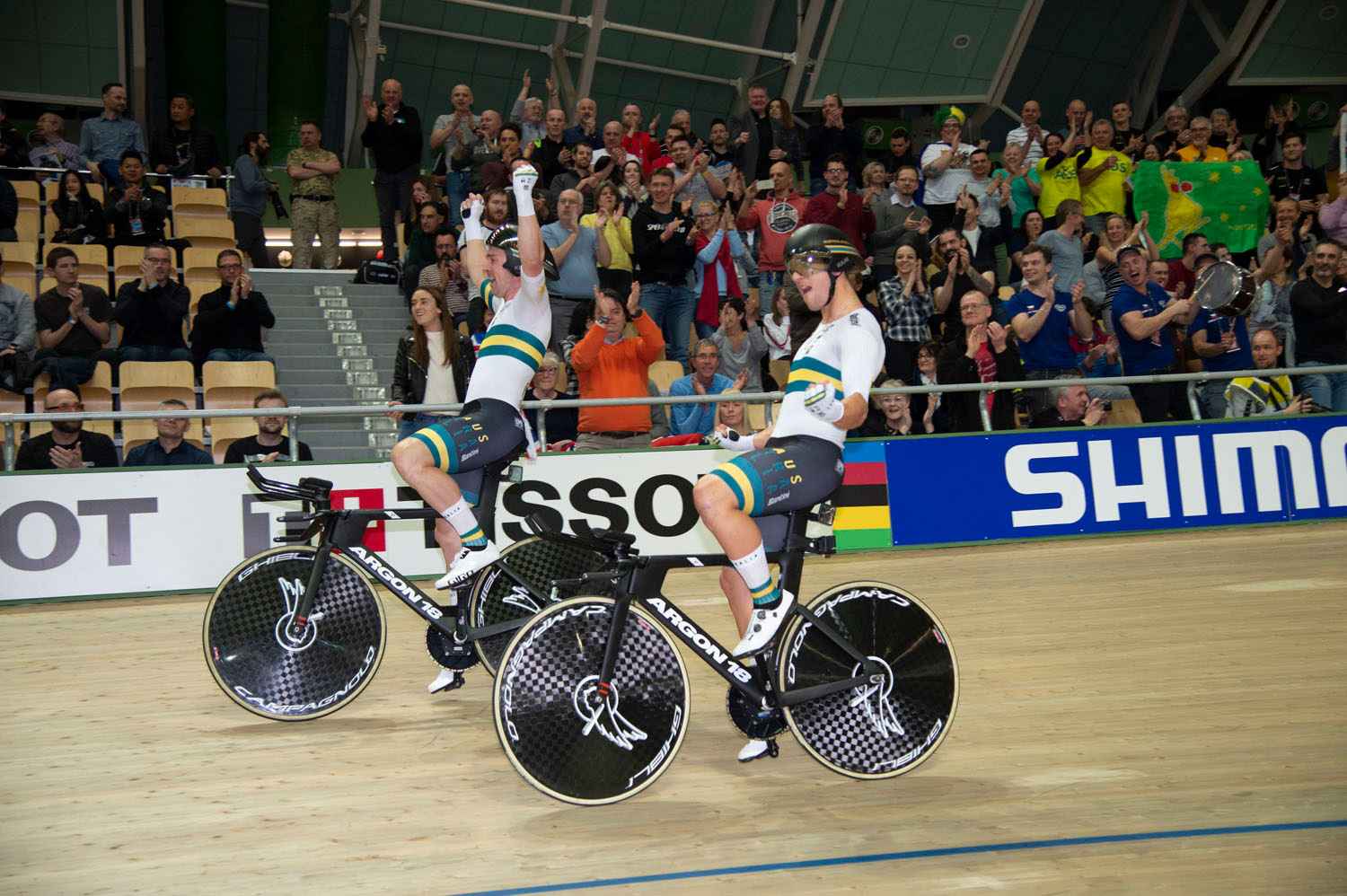 Not a Zipp logo in sight… despite a sponsorship agreement announced earlier this year.

Finding the right bikes and components…

“We conducted a thorough worldwide search and carefully considered our options,” said Simon Jones in July 2018 when the Argon 18 deal was confirmed.

“We knew this was a big decision and we gave it a massive amount of thought and research. We’re taking a broader approach to how we produce results and Argon 18 are our partner. This is more than ‘just the bikes’; this is partnership with shared goals.”

To that end, the recent Comm Games and world championships have served a purpose: the conquests suggest that the partnership is a good one. But, after speaking with people with links to the product suppliers, we have reason to believe it’s going to get better.

On 11 January 2019, Cycling Australia held a function at the Super-Drome in Adelaide. It was the Friday before the Santos Tour Down Under, a time of genuine buzz in the Australian cycling community. The theme of the night was to unveil another new equipment partnership, largely for the track team. 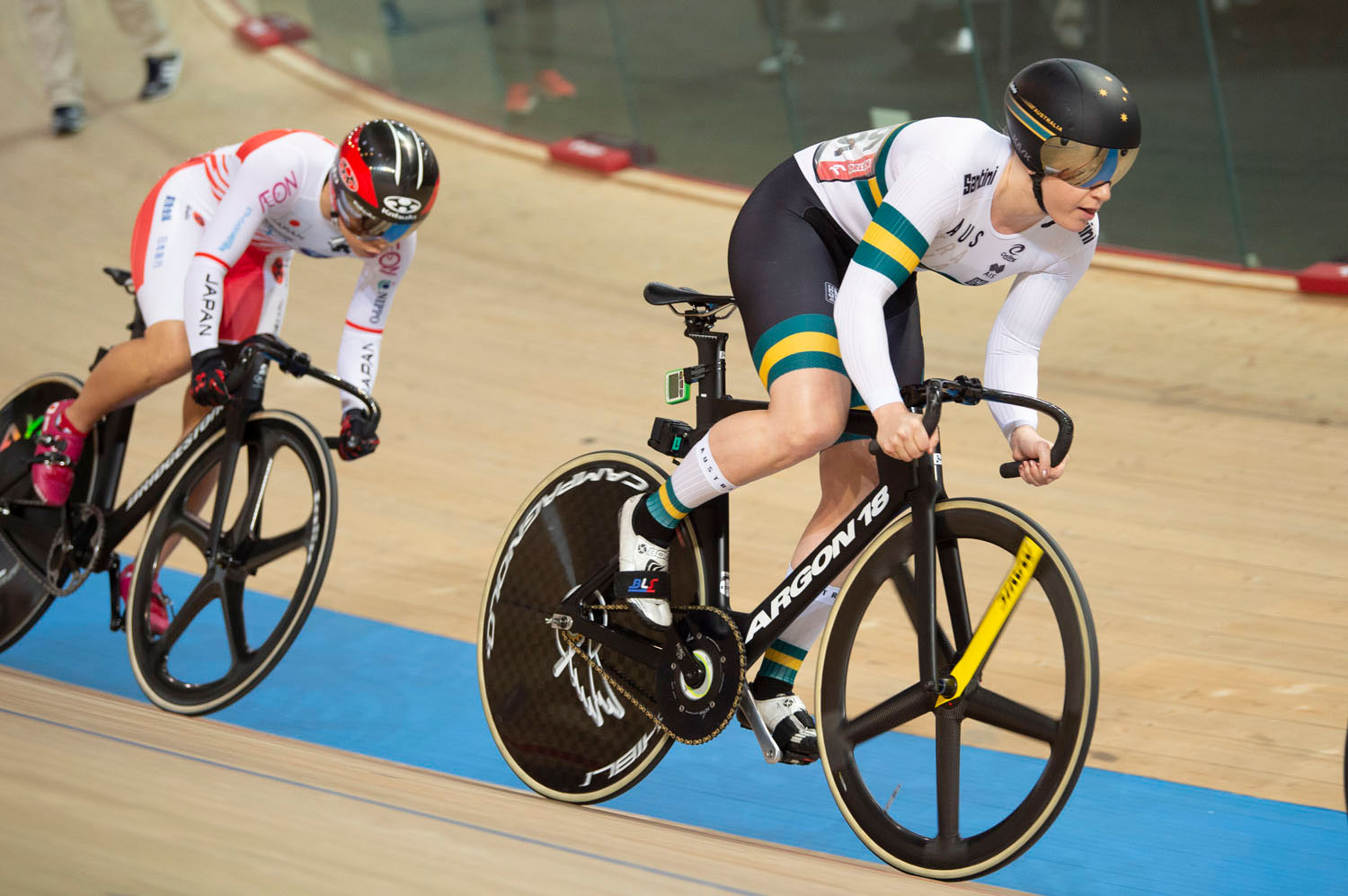 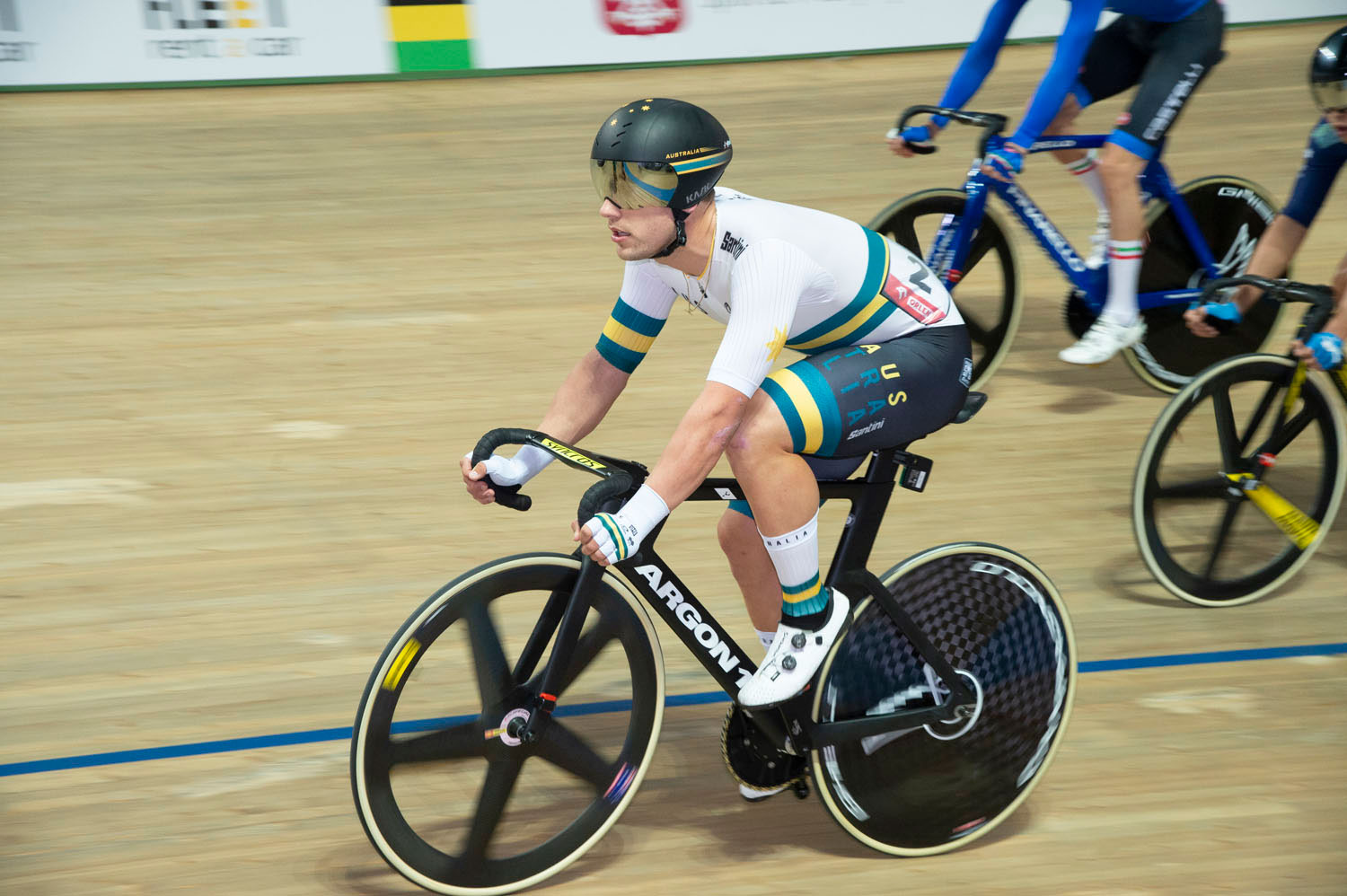 Morton raced the keirin with the added weight of a video camera on the seat tube of her Argon 18 frame. Welsford did likewise in the team pursuit and, in the scratch race, he used the handlebar and stem combo by Syncros.

Earlier this year, Zipp signed on to be a product partner of the Australian Cycling Team. And there was some fanfare. The wheel maker has long had a reputation for creating fast, aerodynamic products. They have been raced with much success around the world but Zipp’s history on the track isn’t nearly as long as that of other brands.

And so that brings us to the obvious observation of equipment used in Pruszkow: yep, there’s the Argon 18 bikes, in all their glory, raced by Australia (and host nation Poland, and a handful of other teams)… but where was Zipp?

“We’re going to wait until everything is completely ready,” a Zipp spokesman told RIDE Media when the championships were going on. He reiterated that point earlier today: it’s a strong sponsorship agreement which everyone is still happy with… even after a successful five-day championship in which you’d be hard-pressed to find a Zipp logo anywhere near the Australian team.

“We’re honoured to be partnering with a true giant of bicycle racing,” said the Zipp spokesman at the function in Adelaide this January. Jason Phillips is excited about the prospect of working with the Australian team, over two decades on from when he was racing for the nation as a road cyclist.

“Track racing – especially the team pursuit – represents the pinnacle of speed, efficiency and teamwork on a bike,” he said.

But wait, the new team pursuit world record (and the gold for the women) was achieved using Campagnolo disc wheels! What’s that all about? 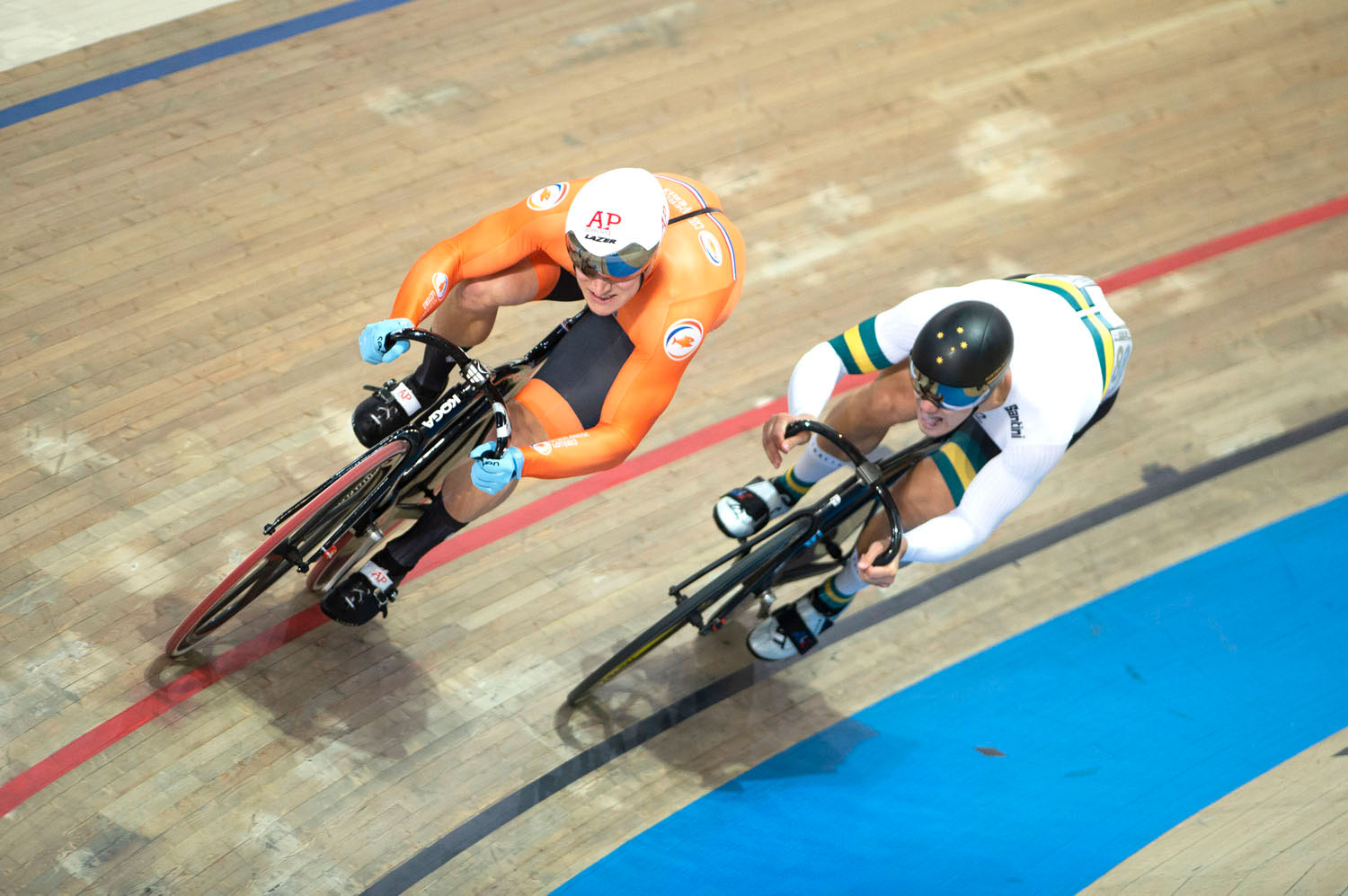 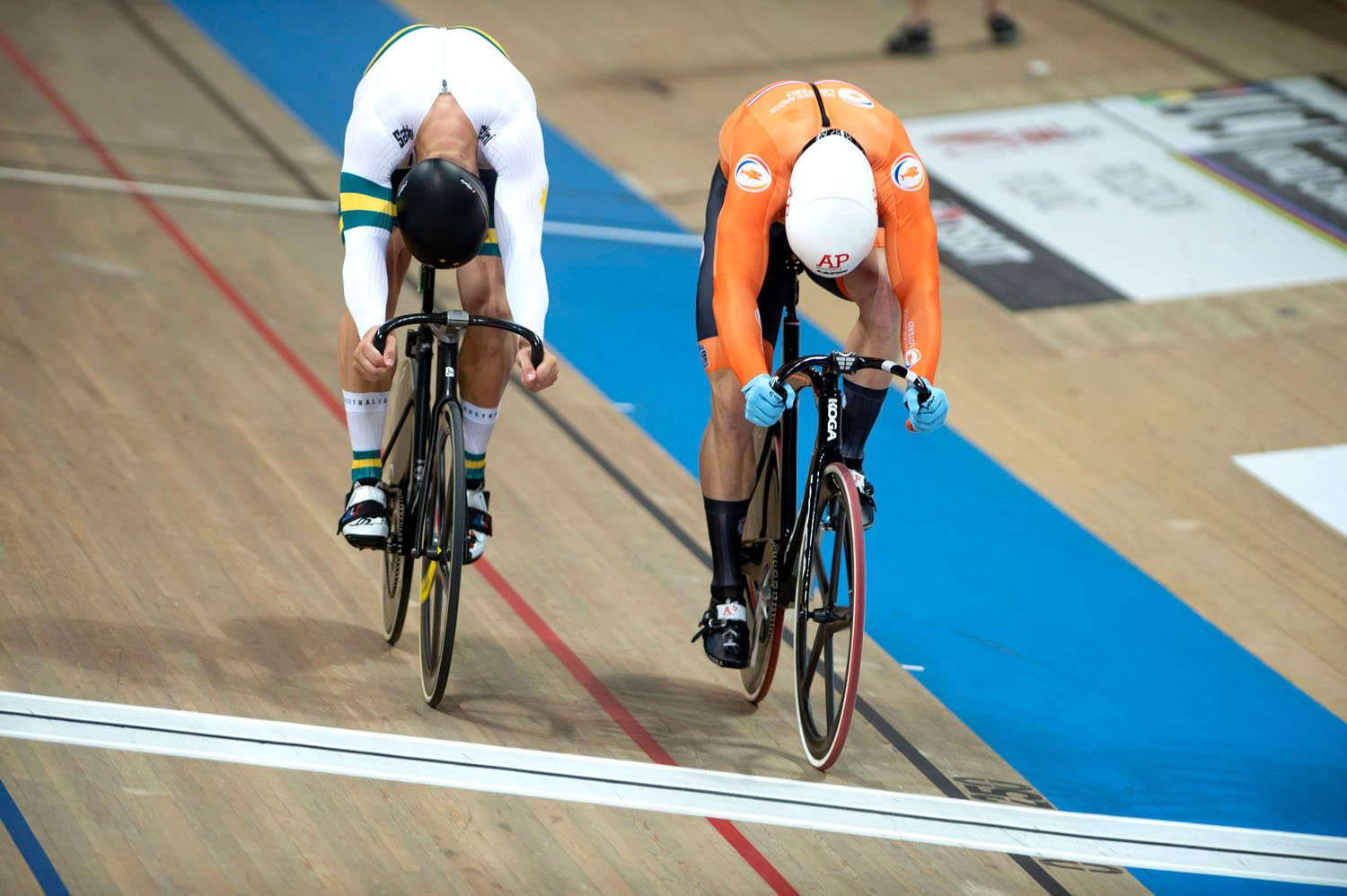 “We weren’t ready,” confessed a Zipp representative who knows the inner machinations of the brand very well. Quite simply, he explained, “we don’t have a front disc wheel yet”. In modern pursuit the disc wheel set-up – front and rear – is ubiquitous. It is efficient, fast, reliable and employed by virtually every pursuit entrant.

“We don’t want to just hand over prototype products,” said the Zipp spokesman. “We want to prove that our product is better.

“We’re going to wait until everything is ready,” he concluded, not able to suggest an exact date for this but he estimated that it would be “around September or October… maybe even November or December.”

It will, evidently, be ready when it’s ready. And, from what RIDE Media understands, it will be part of a three-way partnership that combines R&D from Argon 18, Zipp and Cycling Australia.

In the meantime, Campagnolo and Mavic wheels are being raced and, from the discussions RIDE Media had during and after the 2019 worlds, Zipp is content with that arrangement.

In Poland, the Aussie sprinters and endurance riders for mass-participation event used Mavic five-spoke front wheels and Campagnolo discs at the rear.

Glaetzer, for example, used Mavic’s IO Rio front; this is the updated version of the Mavic’s reliable, popular five-spoke as used by the likes of Kaarle McCulloch and Steph Morton.

It ends up looking like a bit of a mish-mash of equipment, but remember: although prestigious, the worlds of 2019 was largely a dress rehearsal for The Big Show in Tokyo next year. 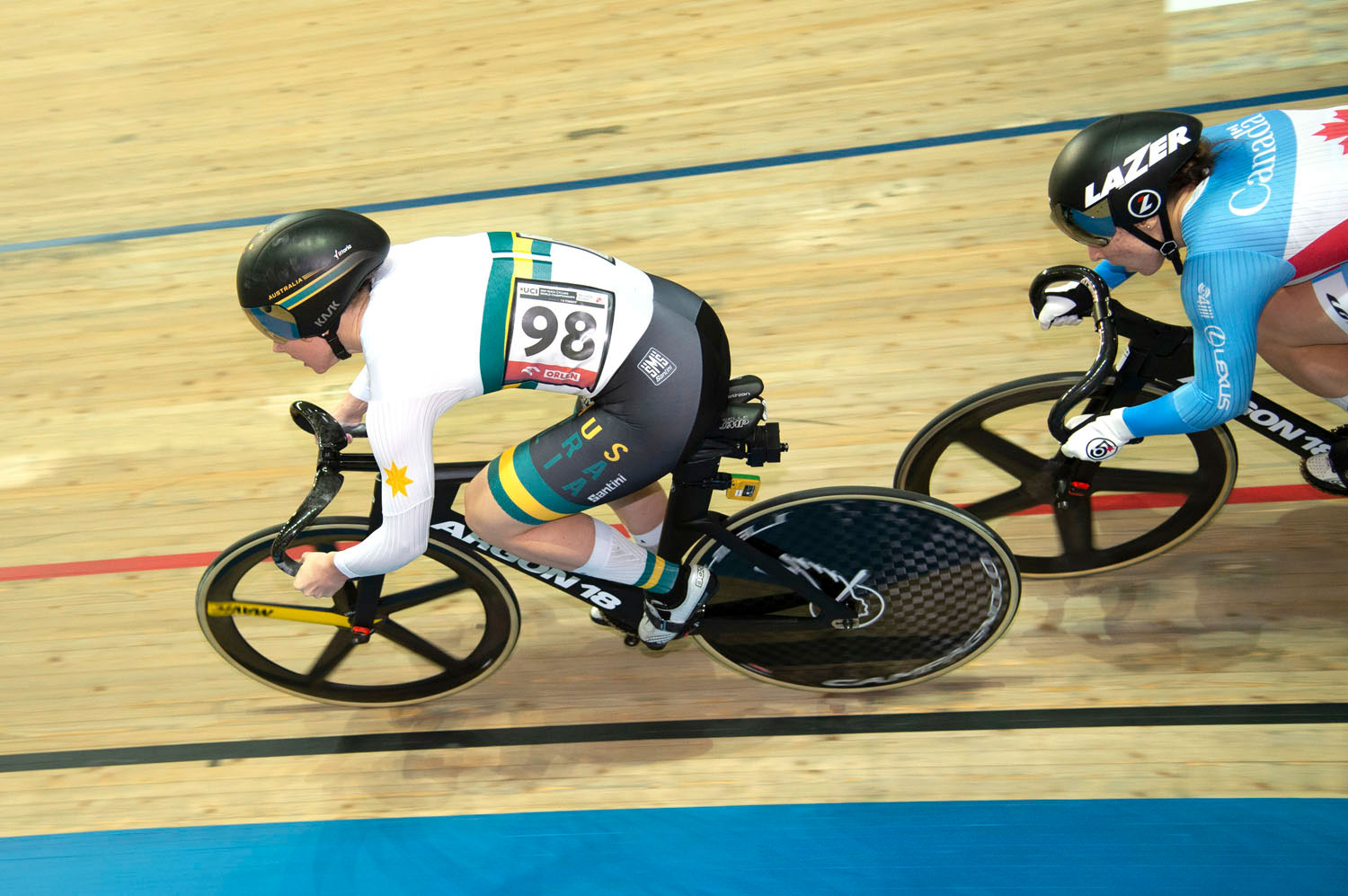 McCulloch raced the keirin with a camera, as well as the Mavic IO Rio five-spoke front (Campagnolo rear). While Alex Manly (above) didn’t even get her fork steerer cut for the points race… which she would go on to win.

The Aussie did “win a few seconds”, they achieved great things. They took home many medals, plenty of memories, and they’ll use that experience to try and make great performances even better by the time they’re racing at the Olympics.

Stay tuned to see what comes of the Argon 18/Zipp/CA partnership. It’s in development but also, for the moment, closely guarded.

We see positions change, with obvious improvements in times. The high arms, low head approach is becoming the norm but just because other teams are mimicking the fastest on the track, it doesn’t mean there’s an end to the innovations that are helping to make track cycling faster than it has ever been. 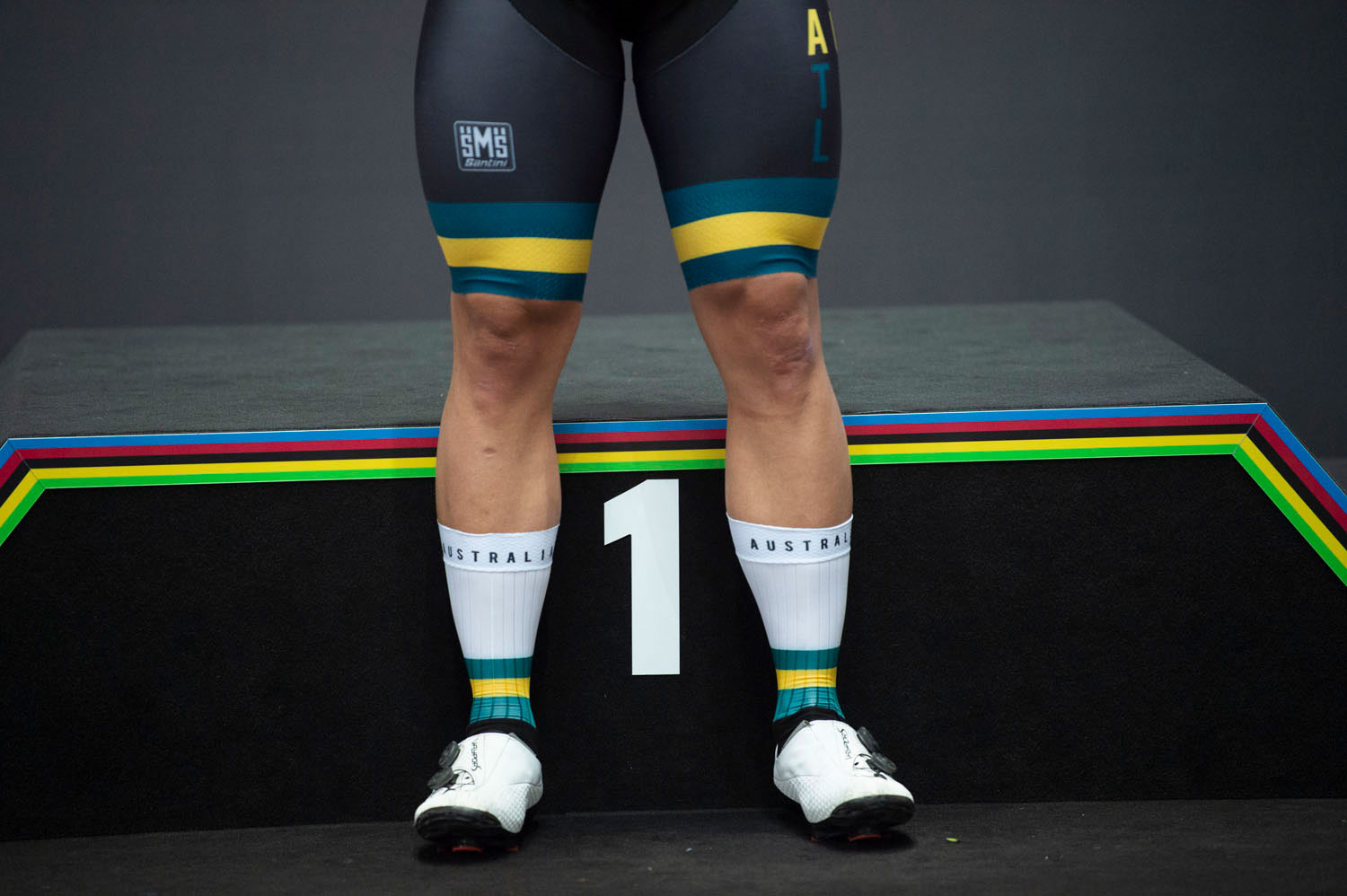