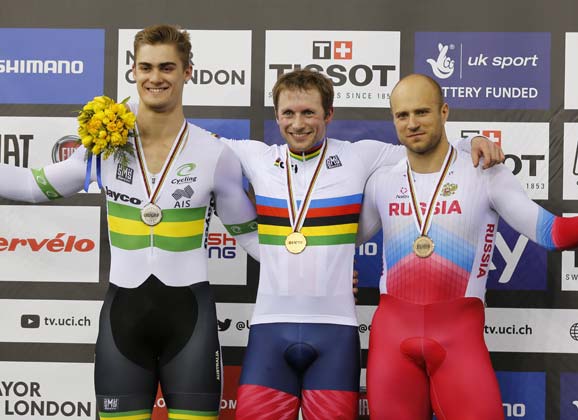 The men’s sprint was another Australia vs Britain clash with Jason Kenny up against Matthew Glaetzer. The Aussie would take the first in the best-of-three final, but then the home town star got the better of him… twice. Gold to Team GB on a night when there was a lot of close competition – including the finale of the omnium in which all three medallists ended up with a tally of 191 points… 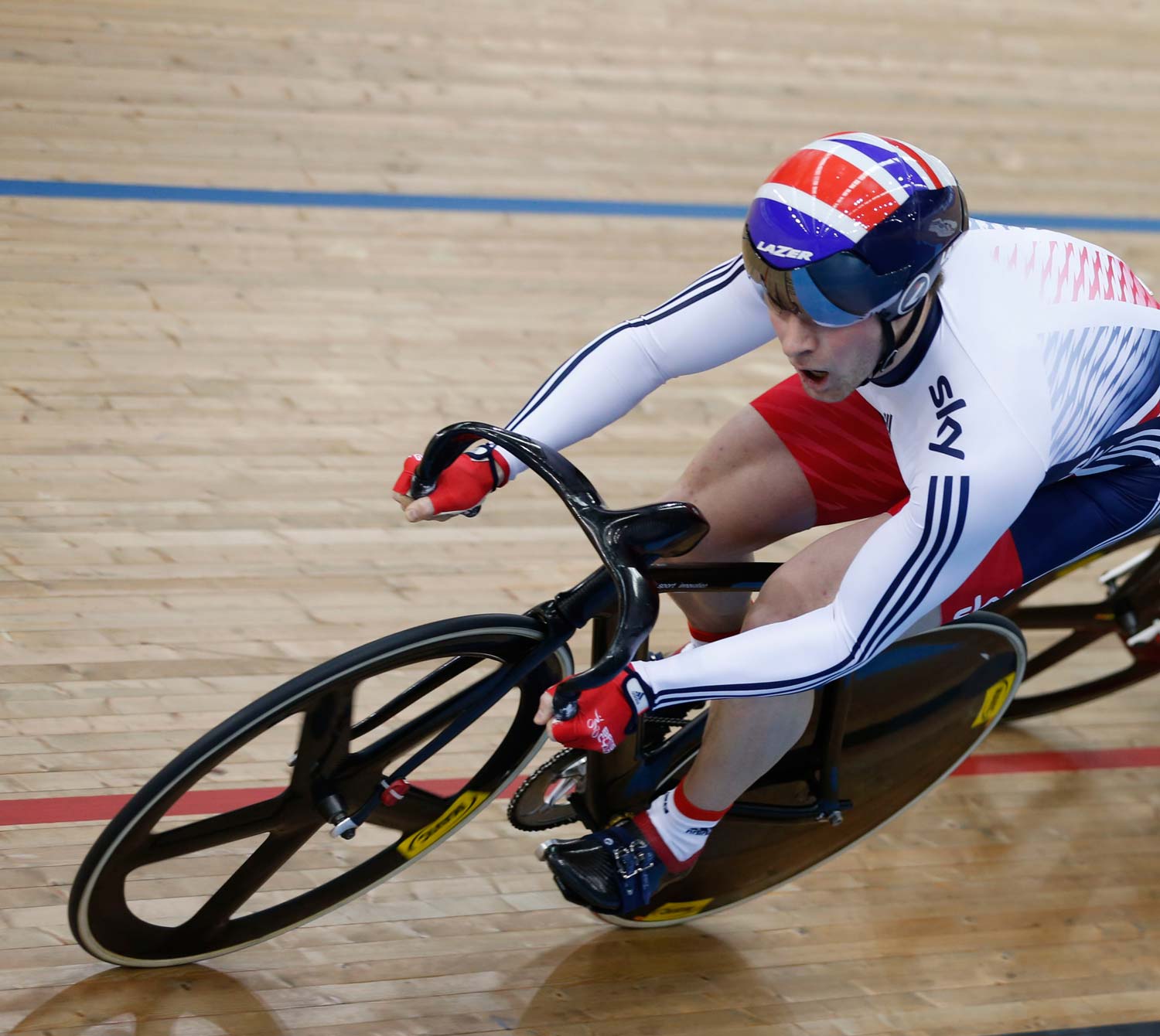 Glaetzer, who finished fifth in Paris 12 months ago, lost out to Great Britain’s Jason Kenny in the final of the men’s sprint.

Both Glaetzer and Kenny had won through to the final easily but the final was a far more competitive affair. Glaetzer took the first race by 0.002 seconds, with less than a tyre width between them. Kenny then fought back to win the second race by a couple of bike lengths, forcing the final to a third and decisive race.

Glaetzer led out the final race. With the pace heating up he had a three bike length lead but Kenny then lit the afterburners and struck back with half a lap to go.

Coming round the outside of the final bend Kenny surged into the lead with too much power for Glaetzer, to win by half a bike length. It secured Great Britain’s first men’s sprint gold of the championships.

For Glaetzer it was his first individual world championships medal.

“I actually feel pretty pleased with that,” Glaetzer said. “It’s a big achievement. It’s my first senior world championship individual medal. I’m really happy to make the finals and then I was stoked to make the gold ride-off.

“Racing against Jason was really almost a practice for Rio, really. It was really important for me to just focus on trying to execute good races. It’s so hard when your body is under that much stress and your body is telling you to stop. But I was really pleased with how I raced today.

“I’ve exceeded expectations to be honest.

“I wanted to be racing for the medals – that was my goal.

“I really just wanted to race well. That’s what it comes down to for me and my goal for this year is to really be professional about the way I go about my sprint racing. To come away with silver, I’m stoked… I’m really happy with this result.” 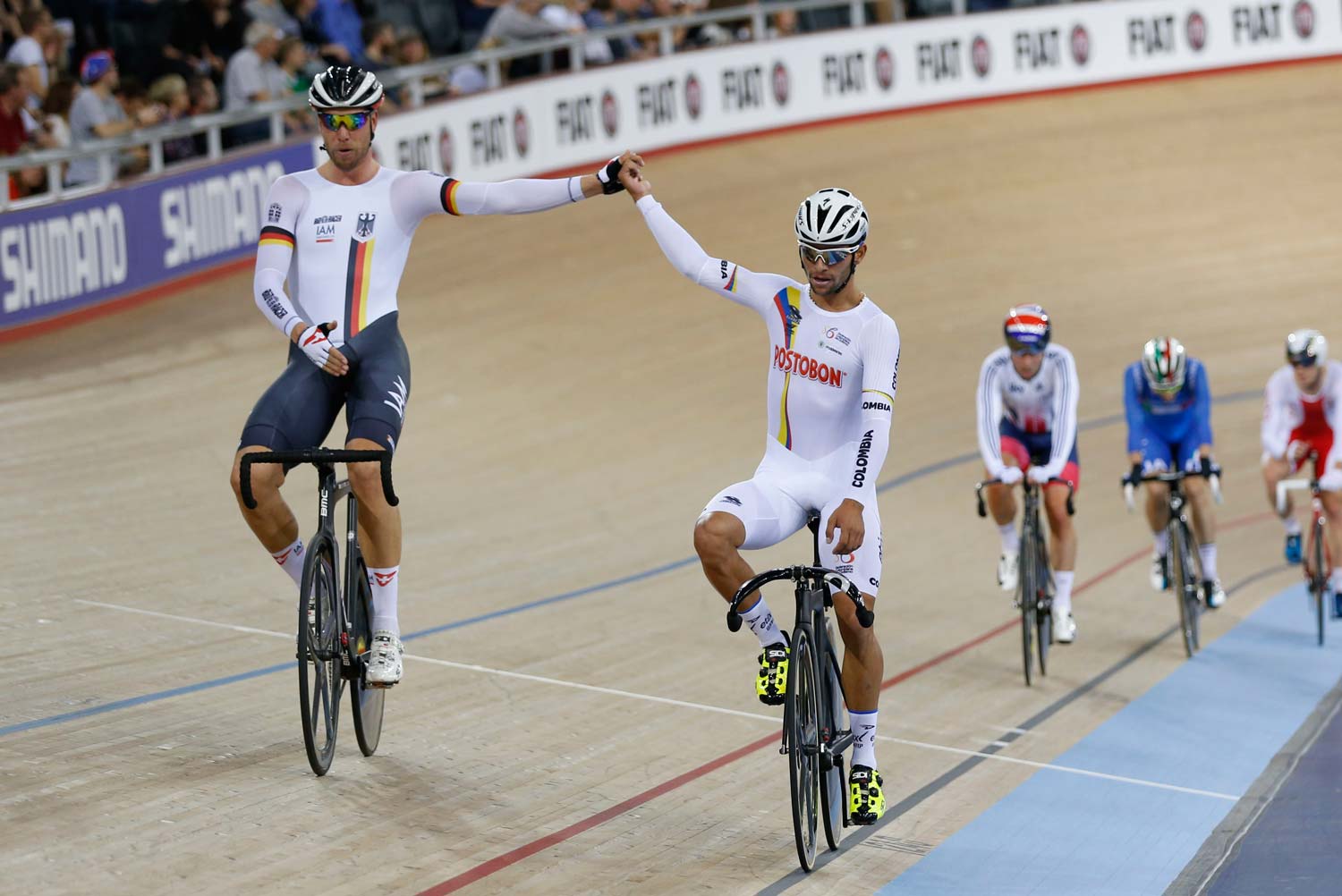 In the omnium heading into the pivotal points race a second place for Glenn O’Shea in the penultimate discipline, the flying lap, had lifted him into fourth overall. Going into the final race O’Shea was forty points behind the leader, Italy’s Elia Viviani, who had a 14 point lead over Colombian Fernando Gaviria. Tim Veldt of the Netherlands lay in third, with Britain’s Mark Cavendish fifth.

With all the points won in the final points race added to the rider’s total the final race is the most crucial of the six disciplines tested in the omnium.

It was tightly contested affair. O’Shea and Germany’s Roger Kluge were both strong, riding impressively and putting in two huge efforts to gain two laps each. Their efforts transformed the standings, lifting themselves into the podium positions with just one sprint remaining, with Gaviria, Kluge and O’Shea all tied on 191 points and Viviani on 186.

It meant it all came down to the final sprint.

In the end none of the top three gained any more points with the final sprint taken by Cavendish. Viviani crossed the line second, gaining three points. That result meant that Gaviria, Kluge and O’Shea all remained on 191 points, Gaviria taking the gold on countback, with Kluge winning silver and O’Shea bronze. Viviani missed out on the medals. Cavendish finished sixth.

“I’m happy but jeez that was close, wasn’t it?” said O’Shea. “Three of us on the same points and Viviani just two points behind us, it doesn’t get any closer. That’s probably a good sign as to why they changed the format.

“It was exciting, it was close. That second lap I got was just maybe a bit late towards the end, I just didn’t have the legs to do the sprint at the end but considering where I was after the pursuit, to find myself on the podium, I’m really, really happy with that.

“That first one [lap gained] was just well timed. I went with some good riders. At the end there everyone was hurting and I just knew that if I kept on chipping away there was a chance I could get that second lap. I was lucky enough to get away with a really strong rider in Lasse Hansen, he was determined to go and I was determined to hang on to his wheel really. We managed to sneak it round there but it was just little too close to the end there for me to really contest the sprint.”

Georgia Baker just missed out on a medal in the women’s points race, finishing fourth on 13 points. Baker won the eighth of the ten sprints to get herself into contention for a medal but missed out on the podium by a single point. The race was marred by a huge crash involving Japan’s Minami Uwano which also brought down France’s Elise Delzenne and Ireland’s Caroline Ryan with just two laps to go.

It was Poland’s Katarzyna Pawlowska who won a disorganised race where the points were thinly spread over the field. Pawlowska’s winning tally was just 15 points, a sharp contrast with the 38 points Stephanie Pohl needed to win the same race in 2015.

Afterwards Baker said: “Fourth is always that position where you’re not sure how to feel. Obviously I was one point off third and if I’d won the final sprint I would’ve won the world championship.

“I am a little bit disappointed but I can’t be too disappointed…I gave it everything out there today. I obviously wasn’t targeting the points race – we were targeting the teams pursuit here. So to finish fourth in my first senior world champs, I’m pretty happy.”

Baker said that she suffered through the mid-part of the 25km race, just when the race became particularly active.

“I went through good and bad patches through the race because it’s just so long,” she said. “I felt really good at the start of the race and tried to position myself and get those early points without expending too much energy. Then through the middle of the race, when attacks were going, unfortunately I went through a bit of a bad patch in that section. I was just trying to really look after myself through there and that was probably the time I needed to get those points and get up more on the leader board. I know in myself I can always finish off the race well in the final sprint.”

In the women’s sprint both Steph Morton and Anna Meares made it through the opening rounds. Morton qualified quickest in a time of 10.760 seconds and progressed smoothly to the quarter-finals. Meares lost out to Germany’s Kristina Vogel in the 1/8 final but then came through the repechage to take her spot in the quarters where she will face her team-mate.

Vogel, the 2015 world champion, will face New Zealand’s Natasha Hansen in her quarter-final.

No British woman made it through to the quarter-finals concluding a disappointing championships for Great Britain’s women sprinters.

Annette Edmondson, defending her 2015 title is lying seventh in the omnium at the halfway stage. The USA’s Sarah Hammer leads with Britain’s Laura Trott, the Olympic champion, second.

Great Britain lead the medal table after four days of competition with seven medals. Australia are third with five.

The final day of competition starts Sunday at 10am (GMT) with the quarter-finals of the women’s sprint. Four rainbow jerseys are up for grabs as the competition reaches its conclusion.