Looking for a destination for your next cycling holiday? There is a world of opportunity for bike riders of all levels in Taiwan. 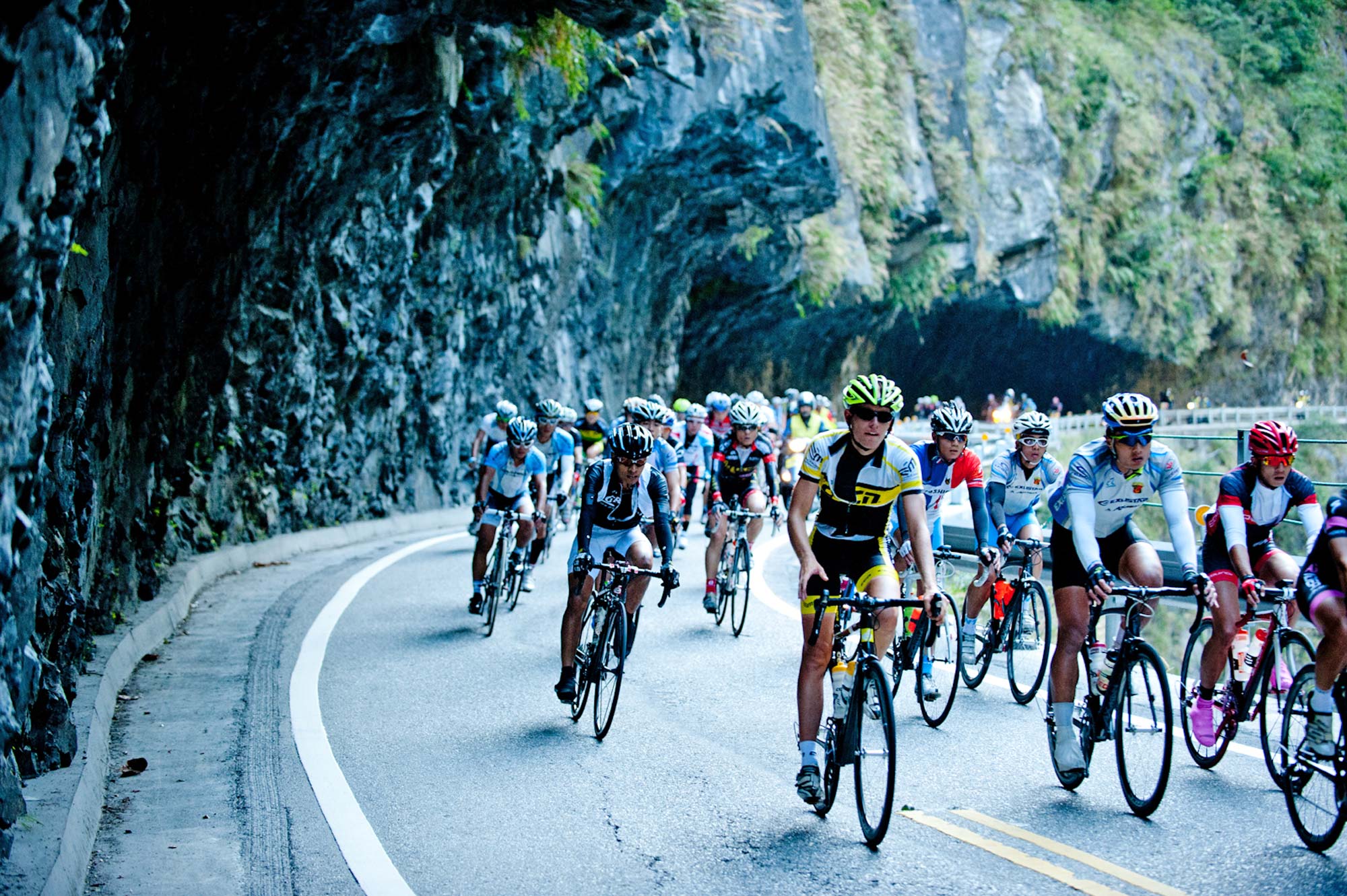 Cycling is a big thing in Taiwan. The island is famous for exporting quality bikes around the world and there’s even an annual festival to celebrate cycling. It also has possibly the best cycling infrastructure in Asia, catering to cyclists of every skill level with an extensive network of paths stretching to more than 900 kilometres with more than 120 rest stops.

The routes are designed for a range of cycling needs, from people who want to take it easy and potter along quiet roads, to cyclists challenging themselves on steep mountain routes.

A keen cyclist can complete a tour around the oblong-shaped island with its twin east and west coasts in 12 days.

To make things even easier, the cycling network has connections to railways and highways and bikes are readily available to hire, so you don’t have to take your own. Another great convenience is that roadside rest areas are available along the routes, providing directions, free water and pumps for tyres.

– This feature is part of a promotion by Taiwan Tourism.
Click here to find out more –

A great idea for people who want to see some of Taiwan by bike but are not keen on strenuous rides, is to bike on some of the shorter routes based in easy-to-get to cities.

Your adventure in Taiwan is very likely to start in the capital Taipei, where you can take a gentle and interesting bike ride along the Keelung River Bicycle Trail. The bikeways run along the left and right banks of the river and start at the Lin An-tai (number 10) Evacuation Gate. They are each 22 kilometres long and take about 90 minutes to complete. Signs along the route provide information about the history of the river and highlights include the evening water and light show at the Fountain of Hope in the Dajia Riverside Park.

Another great ride is the Yuetan Bike Path, based at one of Taiwan’s beauty spots, Sun Moon Lake, in the centre of the country. From Taipei, take the high-speed rail to Taichung Station and then a bus to Sun Moon Lake, where you can pick up the Yuetan Bike Path, an eight-kilometre route stretching from Syuentzang Temple via Huantan Tunnel No. 1 to the Mingtan Water Outlet. You’ll enjoy spectacular views of mountains and lakes including the Toushe Basin, a peat wetland with its unique ecology and ground that shakes when you step hard on it.

For a coastal route to the north-east of Sun Moon Lake, head to Hualien City. The 15-kilometre-long Hualien City Coastal Bikeway from Nanbin Park in Hualien City to Qixingtan Beach winds through narrow roads lined with beautiful homes, giant factories and temples, before opening up to rice paddies and a spectacular coastline. Along the way, stop at the Hualien Fishing Harbor, for a fresh seafood meal. 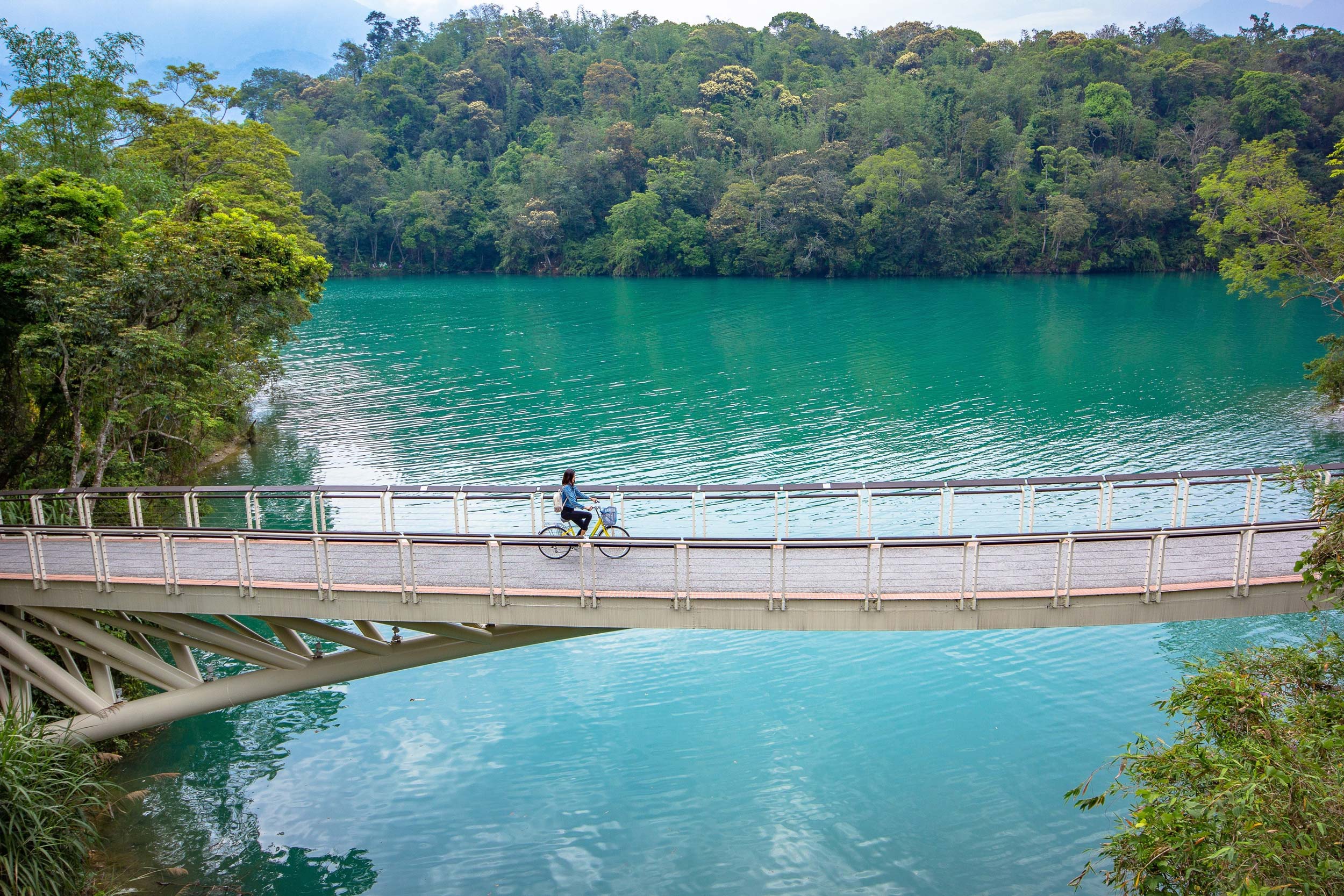 If challenging mountain roads are more your scene, Route 169 takes you into the hills of Alishan. The roads are well-surfaced and the reward for the steep climb includes staying at remote mountain villages and spectacular views over deep valleys and tea plantations. The region is especially gorgeous at cherry blossom time.

It can take up to 12 days to complete the circuit. Heading down the scenic west coast, the toughest stretch lies ahead on the east coast, where more than 280 mountain summits tower above as you ride through indigenous tribal villages and tropical forests. A highlight is the 19-kilometre Taroko Gorge National Park with the world’s largest marble canyon.

Taiwan makes it easy for anyone contemplating a cycling getaway. There are numerous places to hire bikes, so you don’t need to lug your own there.

Stores renting Giant brand bikes are dotted all over the island, providing trekking bikes with panniers, cycle computers and a multi-tool.

A big plus is that you can pick up the bike at one shop and drop it off at another one at the end of your tour.

Anytime is a good time to head to Taiwan, but temperatures are milder from October to April.

Taiwan offers a range of accommodation from freedom camping, official camping grounds, hostels, guesthouses and hotels. If you are freedom camping, note that you are not allowed to camp at many public areas including parks and beaches. Another more unusual option is the gazebos that are dotted around the country and at the very least, provide shelter from a downpour.

You won’t go hungry in Taiwan! The island is famous for its fresh, delicious food.

Try small restaurants when you cycle into a new town for regional specialities including indigenous foods. In the larger cities, the food at night markets must not be missed!

Taiwan also has high-end Michelin-starred restaurants, if you are touring in style.

Convenience stores including 7-Eleven and family-run grocery and fruit stores can be found in every town and some have ATM and WiFi.

So, what are you waiting for? Get on your bike!

Taiwan is a cyclist’s paradise, with its elaborate infrastructure of cycle routes catering to all ranges of fitness and skill, its stunning scenery and its friendly, welcoming people. It has a good transport network if you want to visit several areas and hiring a bike is no problem. It’s also a chance to try Taiwan’s famous food, with its regional specialties. Cycling in Taiwan is the ideal way to see the country, meet the locals and have an enjoyable, healthy holiday.