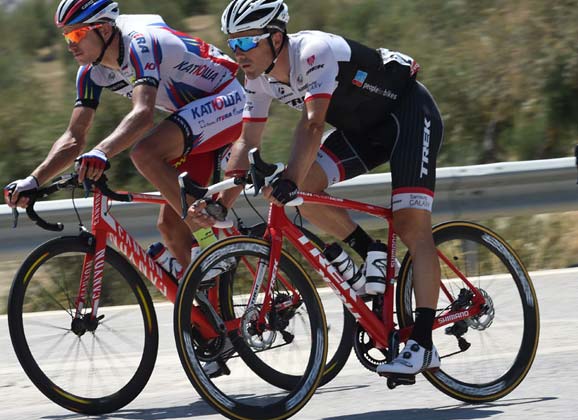 The two-month trial period for disc brakes on road bikes continues and yesterday Trek Factory Racing had one rider using a Domane frame with discs in the Vuelta a España. We have already seen Team Sky trial Shimano’s direct-mount arrangement in the Eneco Tour – the debut for the brand’s disc brakes in the road peloton – but the trial by Markel Irizar is another precedent: the first use of disc brakes in a Grand Tour. 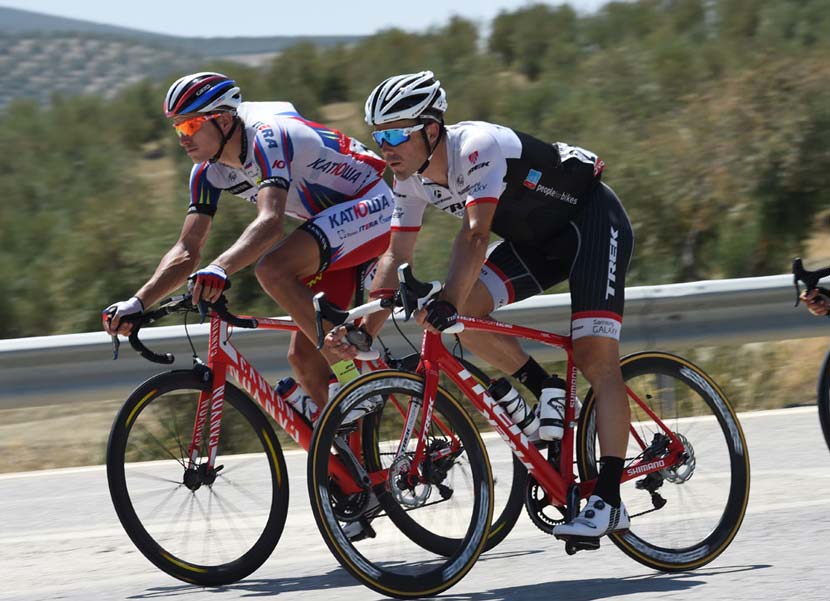 The Vuelta experiment is the first time that a bike company/title sponsor has used disc brakes in a Grand Tour and it was something planned well in advance. “We’ll be using the existing Trek Domane Disc platform for the test and adapt it to the riders race geometry,” a team representative told RIDE on 14 August. “Markel Irizar is a confirmed test rider for us at the Vuelta – he’s very excited about it. The Tour of Colorado was our first option for a test, but roster changes wiped that plan off the table and instead we decided to start at the Vuelta.”

Irizar used the new system for the first time yesterday and offered his thoughts afterwards on the team’s website: “Of course it’s a little more heavier and to change the wheel is a little more difficult, but I think that this is the future. Many riders have been concerned about safety, like when it is really hot and if you crash it can cause damage by cutting someone or even burning. So I think for the future Shimano may have to look at covering the disc, and once we are 100 percent sure that nothing can happen, then I think everyone will use it because for sure in the rain the [braking] difference is going to be huge.”

Irizar finished 141st in the stage to Carzola, over eight minutes behind the winner Esteban Chaves of OGE. He’s going to try the disc brakes again over the weekend. “I think that in a couple of years for sure everyone will love it. This is the first step, of course, there are some things we can improve, but this was Shimano’s goal, to have it tested in races to have the information. I will try it again in two days. I think with some small changes that this will be the future.” 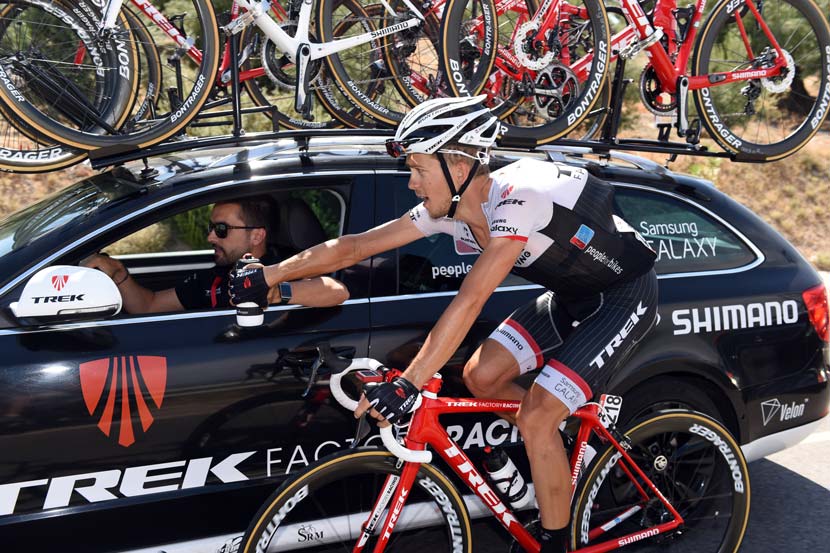 The trial raises some questions about issues relating to what products to use and how to manage possible bike changes. But Trek’s mechanics have a plan in place. “We’ll be testing different wheel depths, multiple rotor options – mostly 160mm, but we’ll test some 140mm too – and multiple brake pads, everything top of the line Shimano of course,” said a team representative about the plan of action.

“The bike will be about a pound heavier. For the mechanics this will obviously be a challenge, but they are eager to learn from this as well.

“The rider’s spare bike on the car will be a ‘normal’ bike because we don’t want to over-complicate wheel changes and instead go straight away for a bike change.

“The goal is to find out what disc brakes bring to racing. We don’t know if disc brakes are really an advantage in a race situation. It’s very possible and this is a great opportunity to study and understand that. We’ll cherry pick some stages and try to find answers.”

We’ll continue to report on the evolution of this new form of stopping in road racing.