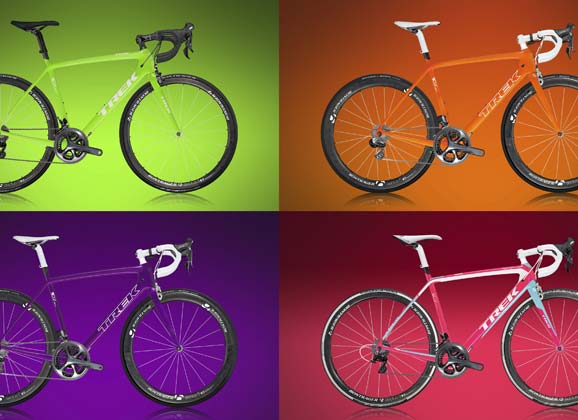 Trek’s Project One: would you like colour with that?

“Paint it black.” “Black on black.” “Black or black.” “Black is the new black.” “Got any blacker?” Etc. It’s everywhere. The proliferation of carbon-fibre frames means many modern bikes are dark – perhaps not completely black… but certainly far from the colourful spectrum that had once been on offer in the local bike shop. Black. It’s stealth. It’s cool. It’s stylish. It’s simple. But, again, it’s everywhere. And when anything becomes so very common, it’s time for a change. The end-of-season tradeshows confirmed it: colour is back. Any colour. Anything other than black… please.

But there’s no need to just take the scheme suggested by the bike brands: you can create your own masterpiece. Trek’s Project One is an example of how you can customise your bike with a minimum of fuss and a flurry of colour.

Click the photo below to begin the slideshow of colour options: it’s a veritable disco presented by bike frames!
[ReflexGallery id=’141′]

The bikes look good. There’s a wealth of colour options and frame choices. And, if you so desire, you can also opt for black. Or blacker.

But what are they like to ride? Well, allow us to explain…

Next month, Jack Lynch joins RIDE Cycling Review as a staff writer. He’s been a mechanic at a shop in Melbourne for several years and now it’s time for a change. He’s moving to Sydney and stepping into RIDE Media HQ in a full-time role that will see him still “on the tools” but also writing… about bikes, cycling, racing, and all other things that we cover in RIDE.

Before the decision was made to move cities and change his job, we asked if he could tell us about his bike. Below is his review of “his” bike: a Trek. He used the Project One palate and selected “argent silver”. Here’s how that process unfolded and what he thinks of his Madone… 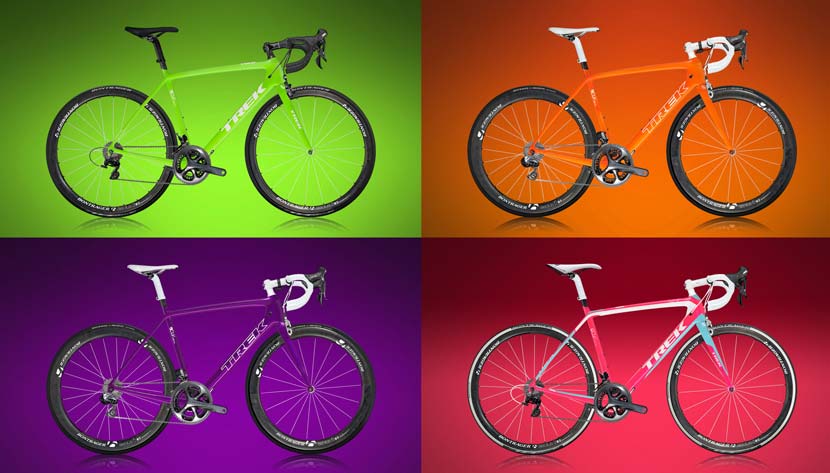 Building and riding the ‘Silver Bullet’

Just select the model, fit, styling and components you desire, and we’ll build your dream bike. Never has such an all-encompassing promise been offered by a major bike manufacturer. We have been told we can ride comfort bikes, aero bikes, stiff bikes, or light bikes but never dream bikes.

Trek’s Project One was an obvious choice for me – I wanted to ride my dream. After owning many ‘top end’ bikes and swapping out components, I felt that Trek had finally come up with something that will cater for my yearning to be unique without the somewhat unnecessary part replacement.

In the road category, Project One allows the consumer to choose any frame category in Trek’s armoury to build around (Madone, Emonda, Domane, Silque). Then, you select the frame’s colours, groupset, wheels, tyres, and just about everything else you need to customise your bike.

I chose the Madone 7 Series with the ‘solid minimal logo’ theme coloured ‘argent silver’. This was because I wanted my bike to standout without being too flashy – something elegant that will not date too quickly… and something that was not black! Affectionately known as the ‘silver bullet’, it was to be the envy of all my cycling friends.

After riding SRAM for the past five years, it was time for a change and Shimano’s Dura-Ace 9070 Di2 was irresistible. (I fell in love with the four-arm crankset at first sight.) The wheels were to be Bontrager’s top-end aluminium RXL model which use the workmanlike DT Swiss 240 hub with thin-bladed Aerolite spokes.

After working out the frame size, fit (height of head tube – H1 or H2), seat cap, bar and stem combination, and all the other components, I clicked proceed and was told to wait 50-60 days. The wait was not a problem as I still had a bike and needed time for the excitement to build and the dream to be realised. Part of Project One’s lustre is that the frames are built and hand painted in the Trek factory in Madison, Wisconsin – a novelty worth waiting for.

It was a shock when the bike arrived after just five weeks. The ‘argent silver’ was a beautiful matte and all the Trek logos were precisely embossed. Finished flawlessly, the colour highlighted the aerodynamic ‘kammtail’ tubing on the frame as the black seat mast matched the cockpit and connected the frame nicely. The steerer protruded 55mm above the frame which required some trimming but it was comforting to know that if I had ordered an H1 and required an H2 then there was plenty of room to alter the bars’ height.

The build went smoothly as all the Di2 cables were already routed. I opted for the Dura-Ace direct mount brakes over the standard Bontrager callipers because Bontrager’s lightweight yet soft aluminium has a tendency to move around under heavy braking and leaves the brakes feeling spongy after a few rides without adjustment. The Dura-Ace brakes were snappy and easy to centre – I was pleased with my decision to spend a bit more for something that seemed superiorly engineered.

The wheels were perfectly true out of the box and added further aesthetic simplicity that matched the sleek-but-ready-for-action theme. The sun was shining when the build was complete but unfortunately Shimano’s battery was not charged so I had to wait a couple of hours – a minor inconvenience.

On the ride, I was blown away at the Madone’s responsiveness. Coming off a Cannondale, I was worried that Trek’s peerless BB90 would have more give than Cannondale’s thick BB30. If anything, the wider system with standard Shimano 24mm spindle felt stiffer than the revolutionary BB30. As a bonus, there were none of the obligatory ‘first-ride’ bottom bracket creaks that I had become so accustomed to with Cannondale. The knowledge that the BB can be serviced without any ‘non-standard’ tools is also comforting especially for those who need to look after their ceramic bearings.

When taking off from a stop, the BB90 ensured the Madone glided up to required speed without any compromise. It also turned me into a sprinter when the pace was high. I felt strong and confident when my riding partners put the foot down which drew complimentary remarks from surprised members of my Saturday group.

In addition to the proprietary bottom bracket, Trek has developed a tapered asymmetric steerer tube labelled ‘E2’. A tapered steerer is standard for any competitive road bike these days but the asymmetric design is what gives the Madone a different feel. It is wider on the sides to provide lateral rigidity when out of the saddle and allows for precise cornering at speed. It is narrow from front to back to absorb road vibration. These principles sound simple but they are remarkably effective.

When climbing out of the saddle, the front end of the bike unbelievably tight. Every flick of the wrists moves the bike in a consistent and deliberate way which makes you feel like you are not losing any energy through the frame. When descending, I was able to relax and look through corners without fear of speed wobbles.

The ‘Ride Tuned’ seat mast provokes, ‘a why didn’t anyone else think of that?’ thought. Unlike other seat posts which insert into the frame or are an integrated ‘one-cut’ system, Trek’s post is a cap that sits over an extension in the frame. It is lightweight and easy to adjust. There are two different lengths each with different set-back options so should suit anyone.

All Madones above a 5 Series come with a 5nm 4mm ‘clicker tool’. This is a torque wrench to ensure that the seat mast (and bar and stem bolts) are not at risk of being over tightened by an excited owner – a problem that many have frustratingly encountered since the introduction of carbon.

For the most part, I really was riding the dream. This dream was not completely faultless, however, and there were a few minor issues.

Cable routing is something of a passion of mine and Trek has done well with their ‘Performance Cable Routing’ system enabling their frames to cater for mechanical and electronic groupsets by merely changing a few cable ferrules. The light and flexible Di2 cable rattled on some rougher roads and sounded a little like a loose headset which was a brief concern. Playing with its tension was the solution but perhaps Trek could look at a way of keeping the cable taut as though it were a mechanical gear cable to avoid the rattle.

The rear brake cable of the Madone must be routed through the down tube but, with a 52cm H1 frame, my head tube is only 11cm, making it near impossible to get a neat cable route whilst maintaining perfect handlebar balance. When riding no hands, the bike pulls to the right a fraction. This problem will only affect the vertically challenged but if the cable entered the frame a little lower the issue would probably be resolved. The rear brake cable’s head tube entry point offers a place where the Madone’s brake can be disengaged. It is a clever design that prevents the commonly seen outer-cable breakage which occurs at the frame junction of bikes with internally routed brake cables and causes the outer to crack and look ugly. It also allows the brakes to be backed-off easily without dismounting or risking losing a finger in case of any rubbing on the rim.

The aforementioned direct mount Dura-Ace brakes must not be set-up too close to the rim or else there is a tendency for them to hit the back rim when out of the saddle. I set them up to a throw that I felt was slightly tighter than ‘standard’ and it rubbed when doing standing efforts. This could be a concern for those running thick carbon clincher rims but is no worries for those on 25-27mm wide alloy hoops. The braking performance of the direct mounted system is equal to that of Shimano’s dual pivot range. Not once did I lock-up and was always able to pull up as quickly as necessary. The clean look and reported aero advantage outweighs the much-maligned direct mount brake.

Whilst the Madone 7 Series Project One has a few minor problems, it still rides like your dream bike. Climbing, descending, sprinting, or riding hard into a headwind – the Madone has it all. The Dura-Ace 9070 Di2 groupset maybe the closest thing to perfect I have encountered and the wheels are as adaptable as any shallow clincher on the market.

With different head tube heights available, it is a bike that can be adapted for anyone. The custom aspect is universally appealing and Trek’s software allows you to track the price of your bike as you build it allowing you to tweak the finer details if your dream has fiscal limitations. The only thing you can not choose is the colour of the spokes. I swapped my stock black spokes for some silver ones for no other reason than to be different (so far, no one has noticed the change).

The Madone delivers the dream that Trek had promised. Project One is a great programme for anyone who does not want to compromise on their notion of an ideal bike. Take the plunge if you want all your bike desires satiated.

(Over the years, RIDE has published reviews of 17 Trek bikes with the latest being the women’s-specific Silque SLX in RIDE #65.)