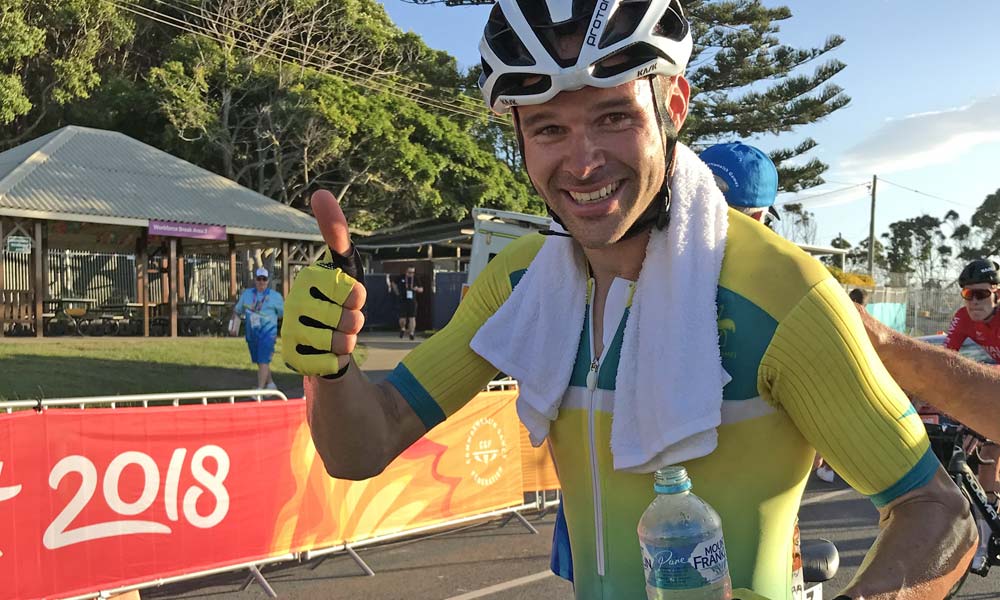 Von Hoff: “This is going to make me happy for a very long time”

There were obligations for the road race gold medallist immediately after his victory on Saturday, but RIDE Media caught up with Steele von Hoff for a quick chat as he looked for his name in the ‘Garden of Medals’…

There are two main stories that will be repeated when recounting the trials faced by Steele von Hoff before he raced to victory in the Commonwealth Games road race in 2018. The first concern seems reasonable considering the second: he admitted that he wasn’t too sure of himself should he be given the responsibility of sprinting for the win… largely because he’d fractured four vertebrae only seven weeks earlier.

That said, he managed to overcome both hurdles and now he’s proud to admit that he’s recorded “a humungous result”.

He offered his summary of events over the phone while he walked around the ‘Garden of Medals’ and, moments before we spoke, he had found his name. He was clearly chuffed by the vision.

“It’s the best win of my career,” he said after I’d told him that I could “hear him grinning”.

He laughed and replied, “Yes, I am. It’s something that I shouldbe smiling about. This is going to make me happy for a very long time.”

Von Hoff is no stranger to winning. In years gone by he’s thrown a few victory salutes; he picked up a stage win in the Tour Down Under a few years ago and he’s the national criterium champion in 2018. But this result is one that’s made him, his future wife Emma, his team sponsor, and his fans very happy.

He explains the lead-up to that moment when he eventually proved he could overcome the pain of the broken back: “Because of my injury seven weeks ago I wasn’t really that confident about sprinting in the road race. Like, I’d done a few sprints in training and I have done a few races back locally but against the good guys that were here, I didn’t want to steal everyone’s chances at winning the medal.”

By “everyone”, he meant his Australian team-mates. There were others in the group who also had options for chasing the gold medal but eventually the sprinting responsibilities were seized by von Hoff. 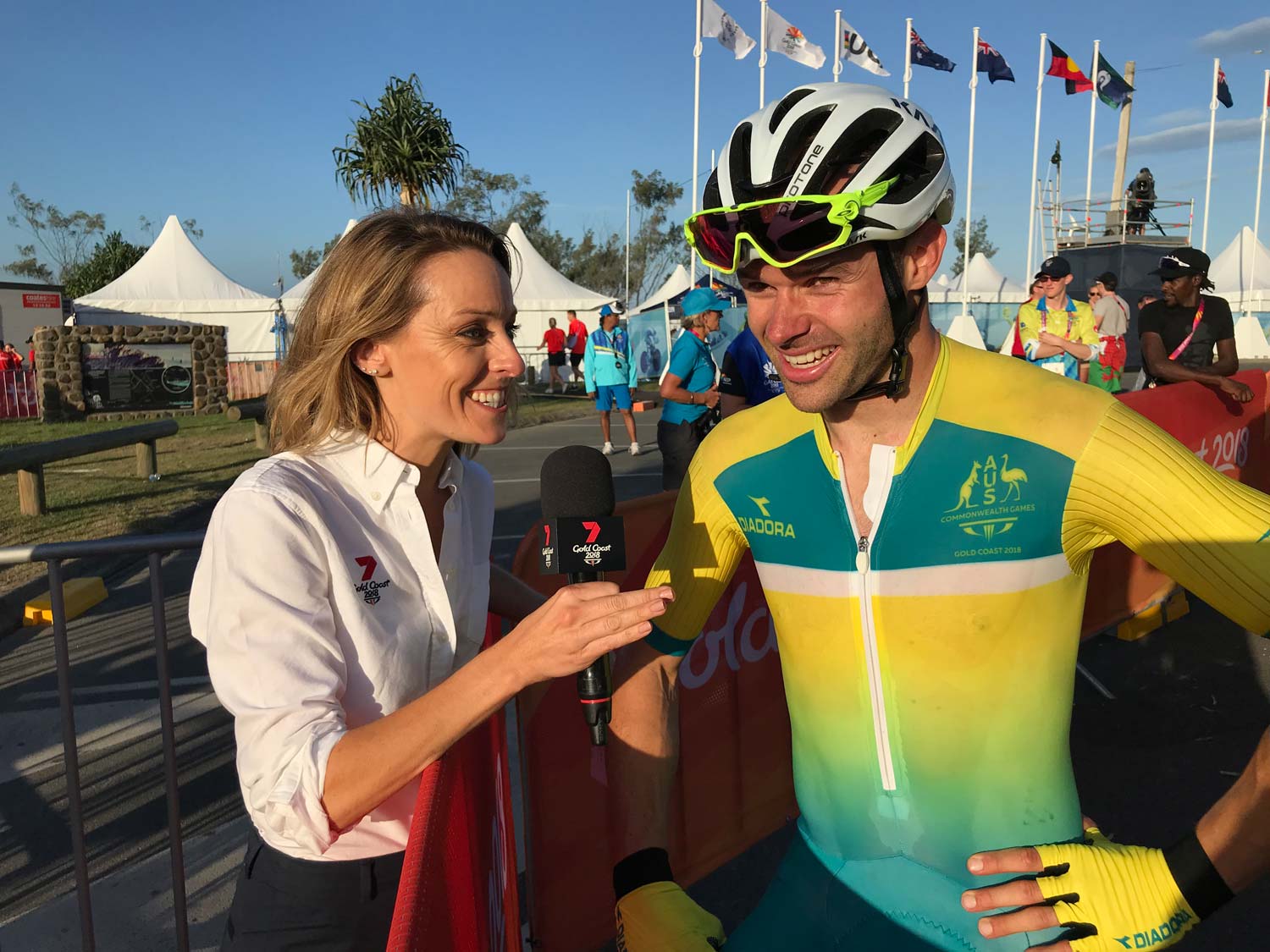 In a chirpy mood a day before he flies to Europe, he talked as he wandered around the garden on the Gold Coast and explained how events unfolded in Currumbin on Saturday.

“I didn’t really want Australia to roll around for a potential non-gold,” said the 30-year-old who, in 2018, races for the Bennelong-SwissWellness team.

“I wanted it to be guaranteed for the win – for the gold – so I said that in the meeting, that ‘I can sprint’, that ‘I can get a result’, but whether or not it’s the topresult… it’s something I wasn’t confident in.

“Everyone had their opportunities to try and break away and get up the road.

“We had Mitch Docker up the road for most of the race, but he wasn’t feeling fantastic up with quite a good group of riders in his breakaway. So, we were ordered to chase, and we managed to bring it back in the final lap, with New Zealand doing an almighty attack up the big climb.”

It was a hectic day of programming at the Games. With a record tally of medals awarded on Saturday, TV scheduling was a challenge. How to appease so many sport fans and allow them all to see the event that were being contested? Ultimately, probably the best option for cycling fans was to log on to the app and follow the action on the small screen.

If you wanted, you could see it all on a hot Saturday arvo, at prime time only a few hours after Chloe Hosking duly reminded everyone how significant a Commonwealth Games gold medal was to her.

The Australian cycling team had gone to the Gold Coast to win gold medals. And they scored twice on Saturday. Sprint wins for Hosking and von Hoff, respectively. In the words of the women’s road race winner, “it’s a big f—ing deal”.

The Commonwealth Games may be difficult to explain to nations which don’t compete in, but they still stir up some sporting fervour when they roll around every four years. The women’s team was determined to keep things together for a sprint and they got their reward.

The strategy for the men’s race was more open, as von Hoff reiterates with his retelling of the planning.

“Cameron Meyer was still up our sleeve as the go-to card and he tried his attack in the final five kilometres,” said Steele. “It was enough to really put the New Zealanders under pressure to bring that back. And then they did a counter-attack because they still had five guys left.

“The guy who countered was Shane Archbold who was one of the guys I was most worried about in a sprint. So, it kind of worked out very well in my favour.”

Van Hoff needed a reliable team-mate and a good lead-out and then he could start forgetting about the anxiety and pain and get into action to finish off the job. That’s when the TT champion, Meyer, stepped in and delivered his sprinter to a winning position.

“When it did come down to the line,” von Hoff said, “Cameron Meyer managed to get back and pull me from one kilometre to go all the way to the line, pretty much. I came off his lead-out and managed to take the win for Australia.

“It has been a few very happy days since because, in the situation I was in, I was a bit stressed about it and nervous and everything but to get the result is just a fantastic feeling.” 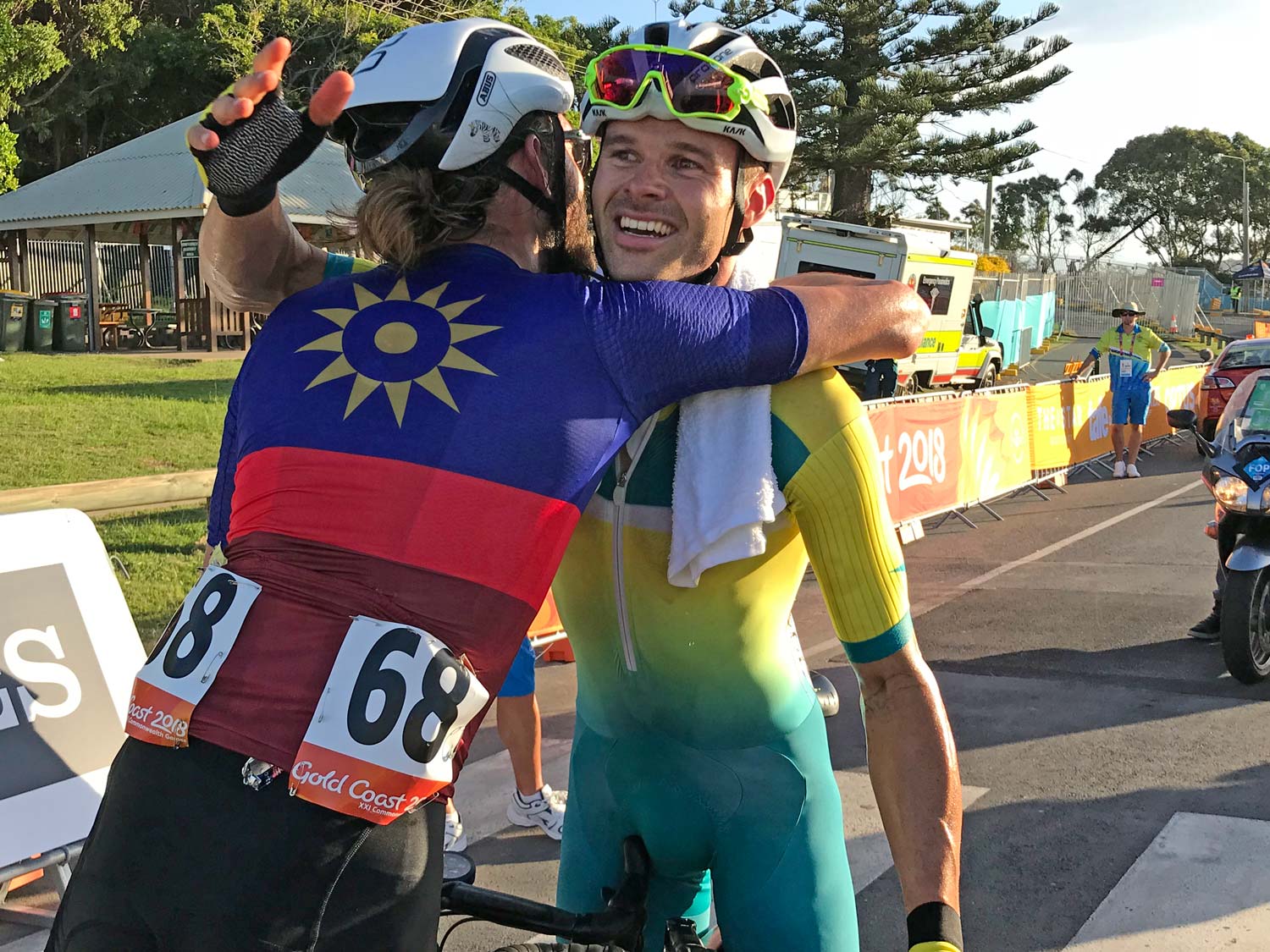 Talking about the injury

Fracture any bone and you’re not likely to jump back on the bike immediately. Damage your vertebrae and extra caution is required. Steele von Hoff learned a few things about this part of the body in recent weeks. He also went against doctor’s orders to get the result he most cherishes.

“I broke two vertebrae in my neck and four in my thoracic,” he said of the injury sustained in a crash seven weeks earlier.

“I was in a brace for two and a half weeks, much to the doctor’s disgust when I took it off – but I had the game plan and the goal and I knew that I had to be back racing. I had a trial race at the four-week mark that I had to perform in to confirm my selection in the team.

“It was full-steam ahead to try and get back and fast-track the recovery as much that it is possible to do.”

He giggles slightly in the retelling, recognising that he was taking risks the medicos weren’t necessarily comfortable with but he seems proud to have taken the gamble.

“I was pushing the boundaries in training,” he admits, “just trying to get everything out of myself just monitoring the pain as I went along.

“I think I did it quite well and I haven’t really had too many backwards steps throughout the training. I managed to get here in an almost pain-free condition and get my 10-second sprint out. And it doesn’t matter how I’m feeling after the race.

“I’m a bit stiff and sore now but I’ve got the rewards from it.”

What about that risk of spinal damage? Was that not floating around in the back of his mind all this time?

“No,” he replies, “it was all in alignment which is what they were most worried about. When it’s in alignment, it’s considered stable.

“I was in as much risk of damaging my spinal cord as anyone else in any crashing situation. The worry was that, if I did crash, I could re-tear all the ligaments and tendons that are binding and re-chip off the fragments of bones that were floating around – and I could get permanent pain. But, touch wood, that hasn’t happened. I haven’t come off again, so I’m good to go at the moment.”

He’s happy. His team – for last week, and for the rest of 2018 – are happy. His girlfriend Emma is happy. And tomorrow he sets off for his first stage race in Europe, the Tour de Bretagne, with Bennelong-SwissWellness.

It’s been a big couple of weeks of competition on the Gold Coast. Bennelong’s MD, Craig Bingham has long been a cycling fan and he echoes the sentiment of many with his appraisal of the results achieved by the Australian Cycling Team.

“We are thrilled and inspired by Steele’s gold medal ride,” Bingham told RIDE Media, “and how he overcome serious injury to get to the race.”

The company with roots in the financial industry is one sponsor backing cycling because of the enthusiasm of the MD but also because it yields positive media coverage and gets some good branding for Bennelong out there. Van Hoff’s win my not have been achieved in corporate colours but the sponsor is still thrilled by the result. Bingham concludes our story with a reference to the first gold medal for the cyclists at the Commonwealth Games.

“We are also excited for Alex Porter – another Bennelong team rider – on his world record team track gold medal. We are delighted to be involved with a team dedicated to finding talented Australian cyclists who can compete on the world stage into the future.”