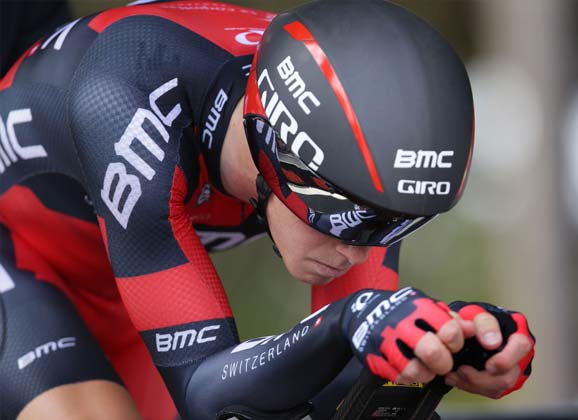 Watching from afar: the thrill of the national TT championships

We had a contributor finish in the top 10 of the elite men’s time trial at the national championships but other commitments meant that RIDE didn’t have anyone on the course in Ballarat for the action. Here’s an overview of how we saw it – and why it was cool to watch… 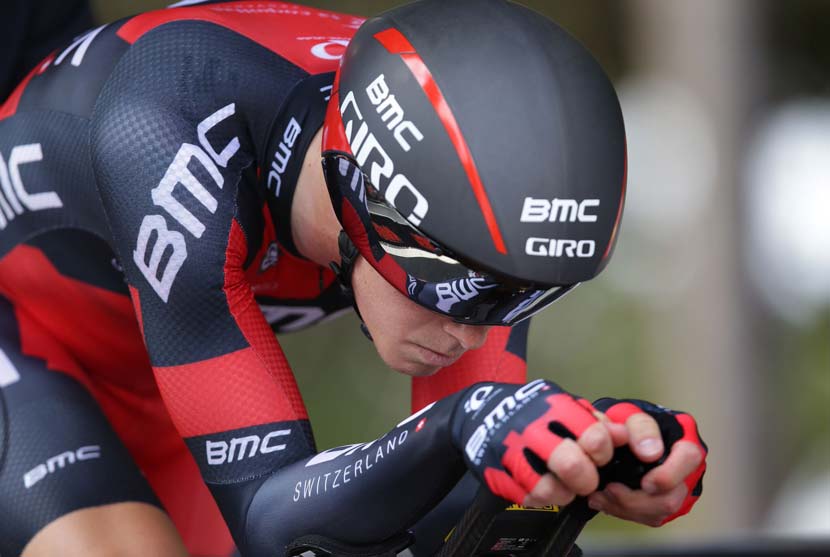 What you see from a TT you can’t see…

Now that was fun… even watching from afar without anything but social media and a few messages from people on the course to help keep us up to date with the action. The Australian time trial championships are done and dusted.

This is the time of the year when many are just settling back into the routine of work if they’ve been lucky enough to get a few days off around that ‘Festive Season’ – remember that? (Seems like a while ago already, huh?)

Some have opted to go to Ballarat and watch the full festival of cycling: a program of events that spans from 6-10 January: criteriums, time trials and, of course, the road races.

Yep, put a hashtag in there and abbreviate it and you’ll find all you need to know on social media. It’s the modern world – you know how it works… well, most of you.

Graeme Brown OAM, a veteran of umpteen years as a professional rider, eventually got the hang of it too. But, with a few minutes to go in the men’s TT, he popped up on Twitter to ask a few questions.

“I cannot find #roadnats TT on tv. There is a tour stage winner vs a potential tour winner vs a world record holder to name a few & no live tv.”

And later: “Anyone with #RoadNats TT info? Or where can I see updates?”

Ah yes, the lack-of-television-coverage lament. It’s an oldie and a goodie for the Australian cycling fan. We’ve been there and done that for years.

Brownie eventually realised where he was: it’s not Lanaken anymore, Graeme. For the long span that he raced with a Dutch team, he was accustomed to seeing the nationals broadcast – TT and all. At least that’s what we can assume from his comment.

There will be live tellie for cycling. It’ll happen, apparently, for a little while, at the end of the women’s road race and then the men’s road race this coming Sunday.

There’ll be four hours of bike racing on Gem, I saw it listed in the TV guide this morning, in a newspaper – yep, true story, print… old-school yes, but that’s how I like to roll sometimes.

Anyway, back to the racing – and moving on from the tangent about modern media consumption habits… 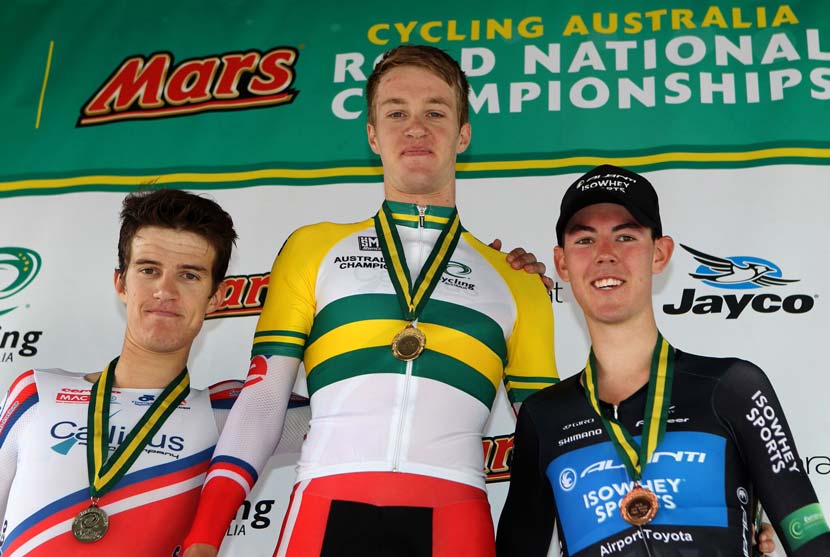 The under-23 men got the TTs rolling this morning and siblings stood on the podium around midday: Callum and Miles Scotson – first and second: 29.3km in 37:40 and 38:00, respectively. Impressive! An average speed of 46.7km/h and the next best, Ben O’Connor over a minute behind the winner.

Next up were the elite women (and the under-23s, eight of them – making up one-third of the field): Katrin Garfoot, she who missed out on a world championship medal by just four seconds last September, covered the 29.3km course in 43:16. She was fastest, beating Shara Gillow by 46 seconds.

Garfoot was in a class of her own: the only woman to average over 40km/h and a deserving champion. 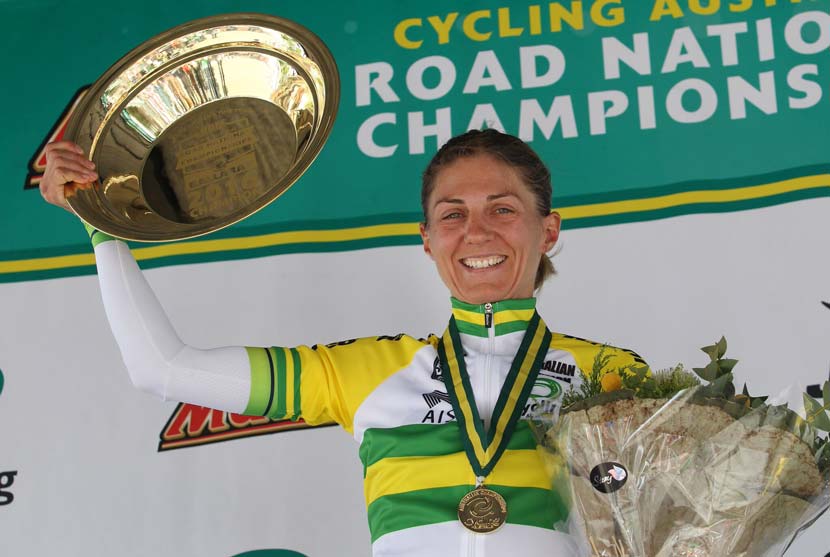 Throughout the day, the hashtag – #RoadNats – got a work-out. It’s a TT and although it’s nice to see the live images on a TV screen, the times are what really tell the story. And we work with what we have… in 2016, at least we have live results (and social media) so let’s be happy about that.

Cycling Australia arranged for the live data to appear on RoadNationals.org.au and there’s a wealth of commentary offered on the federation’s Twitter feed.

It was possible to follow the action (from an office in Sydney, where I sit writing this summary at the end of the day) and understand who was in form, who was consistent, who was fast… but not everything can be ascertained from afar.

How could it be, for example, that at the intermediate check Jack Bobridge could be poised for a repeat of his podium place last year – tracking through the halfway mark only six seconds behind Rohan Dennis – and then reach the finish with the 10th best time. Fast start, slow finish? Puncture? Still getting used to a new bike?

It was Jack’s first race in the Trek-Segafredo skinsuit and he’d eventually finish 4:20 behind Rohan. (In ninth, out of interest for regular readers of RIDE, was Nick Squillari who has contributed to the magazine and the RIDE Media site for years.)

This time the podium was rounded out by Sean Lake of the Avanti-IsoWhey team. Ahead of him was Rohan Dennis and Richie Porte – the “Tour stage winner” and “potential Tour winner” that Graeme Brown was talking about.

Lake has won the Grafton to Inverell Classic and he’s clearly a formidable rider, but he’s not the household name that the two BMC Racing riders ahead of him are.

Dennis was second in the nationals TT last year. He was beaten by Porte who covered the course in 51:50. There was eight seconds between them in 2015. 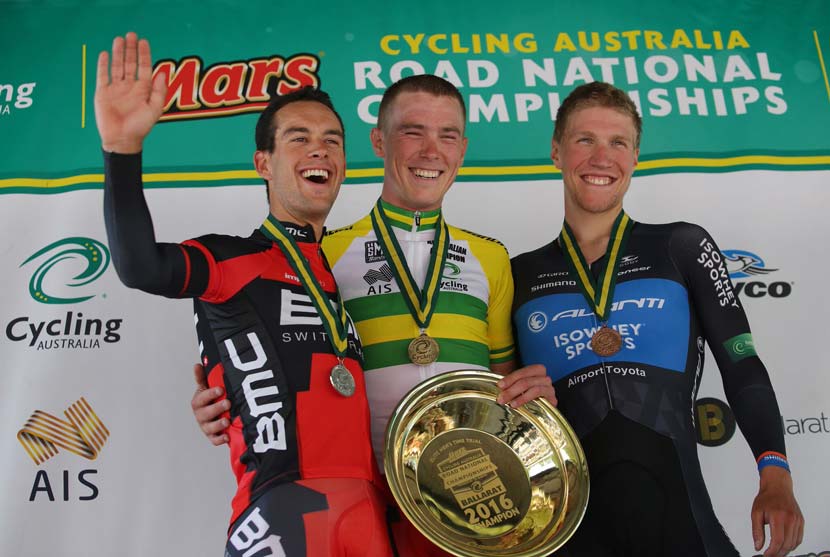 The time trial is part of the summer of cycling in Australia that kicks off a season of racing. It was fun to watch from afar because there are so many commentators using myriad media to express their opinion, show off their photos, and share their emotions.

It’s racing and it’s exciting to watch even when you see none of the action.

It’s sport with times to consider and stats to analyse and results to remind us of what unfolded.

It’s an example of how the culture of cycling has changed in Australia in recent times.

And it’s a prelude to what’s yet to come in an exciting month of action in this part of the world. Congrats to all involved. It’s great to see the fruits of your labour – even without seeing a thing.