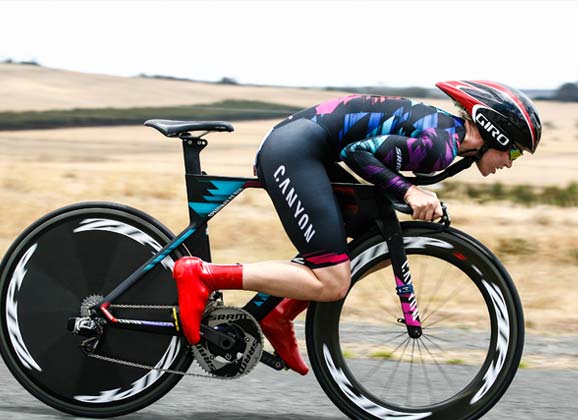 For many years, Jarrod Partridge invested a lot of time and effort into following cycling with a few cameras a collection of lenses – and the hope of capturing something he believes is beautiful. The bike has given him a lot of satisfaction, even if most of that comes from observing others doing the riding.

He has been the man behind Peloton Café for many years, documenting the Australian racing scene arguably more than any other outlet. And now the time has come for him to diversify his career… and have a little break from cycling.

We asked Partridge if he could submit his favourite photos and write a little about what makes them special to him. Here is his edit… 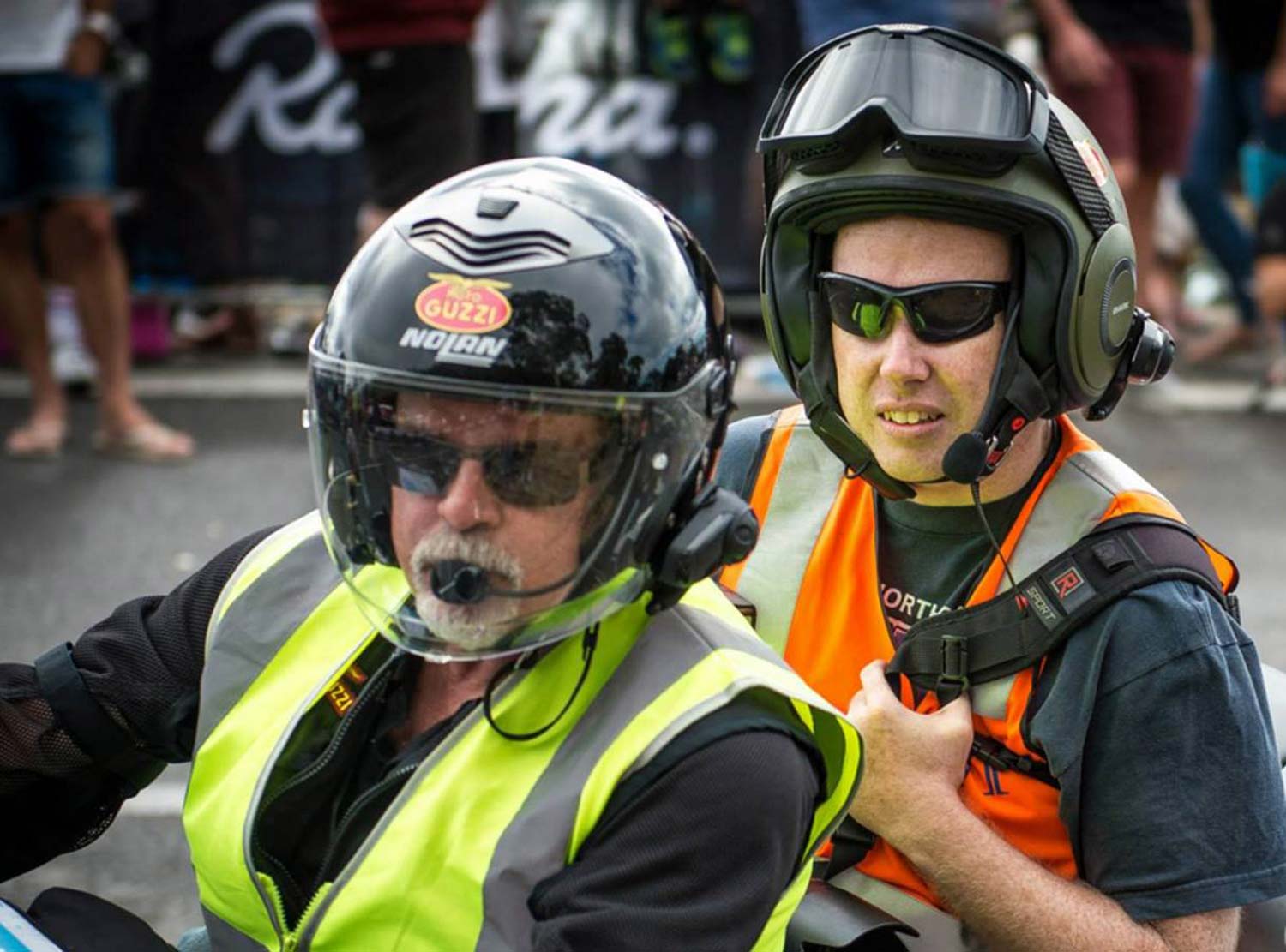 For the love of cycling… and to quell anxiety

“Why bikes?” That was a question I was asked regularly for 10 years. The answer was simple: I’d seen the Tour de France on TV and, like many, I became hooked. A childhood love of media provided the foundation for picking up a camera, and aspiring to be like Graham Watson, shooting the Tour from the back of a moto. After a while, I discovered there were more races on the calendar than just the Tour and, even better, there was a huge amount of racing in Australia – and it was a great standard!

But why bikes? Well, you combine the scenery of Australia with the colours of the peloton and magic happens.

Yeah, but why bikes?! The truth is, photographing cycling became an outlet for me. While battling massive anxiety issues, it provided what I needed to get by.

I identified myself through cycling and being away at a race every weekend is a fantastic excuse for avoiding social situations that I know will trigger anxiety.

It was a win-win situation.

It has been an incredible ride, working with and learning from the best photographers in Australia such as Mark Gunter, Michael Klein, Shane Goss and Con Chronis, but now it’s time for me to move on.

Putting this collection of images brought back some great memories, I hope you enjoy them. 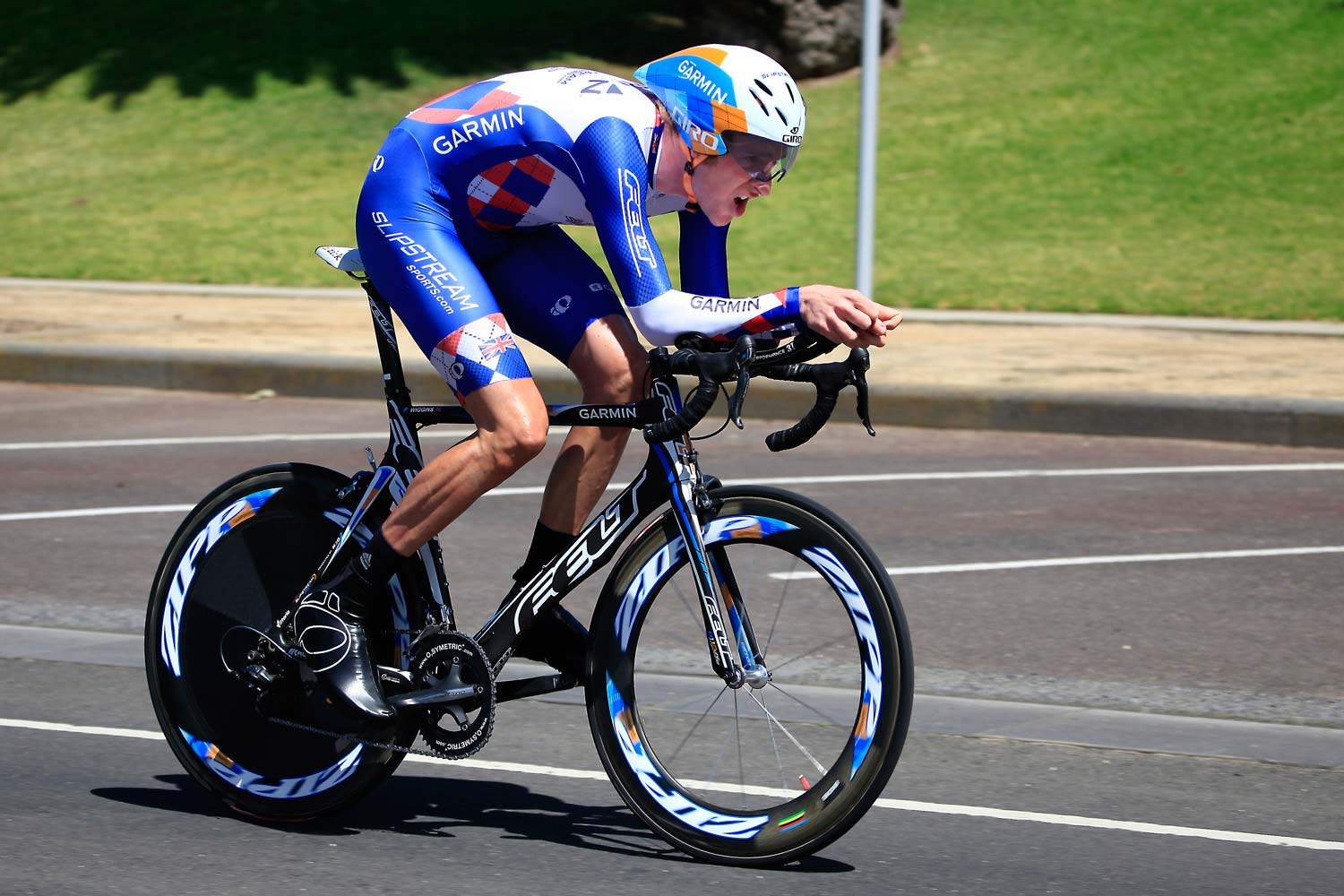 In 2009 I was still pretty much a fan boy. While I would often shoot local races as ‘media’, I hadn’t snared a coveted media pass to enable me to step behind the curtain. This race changed all that for me.

This pic was picked up on social media by Garmin-Slipstream and the rest was history. I’m a massive fan of Wiggo, and was thrilled to see him race in person – the rest was a bonus! 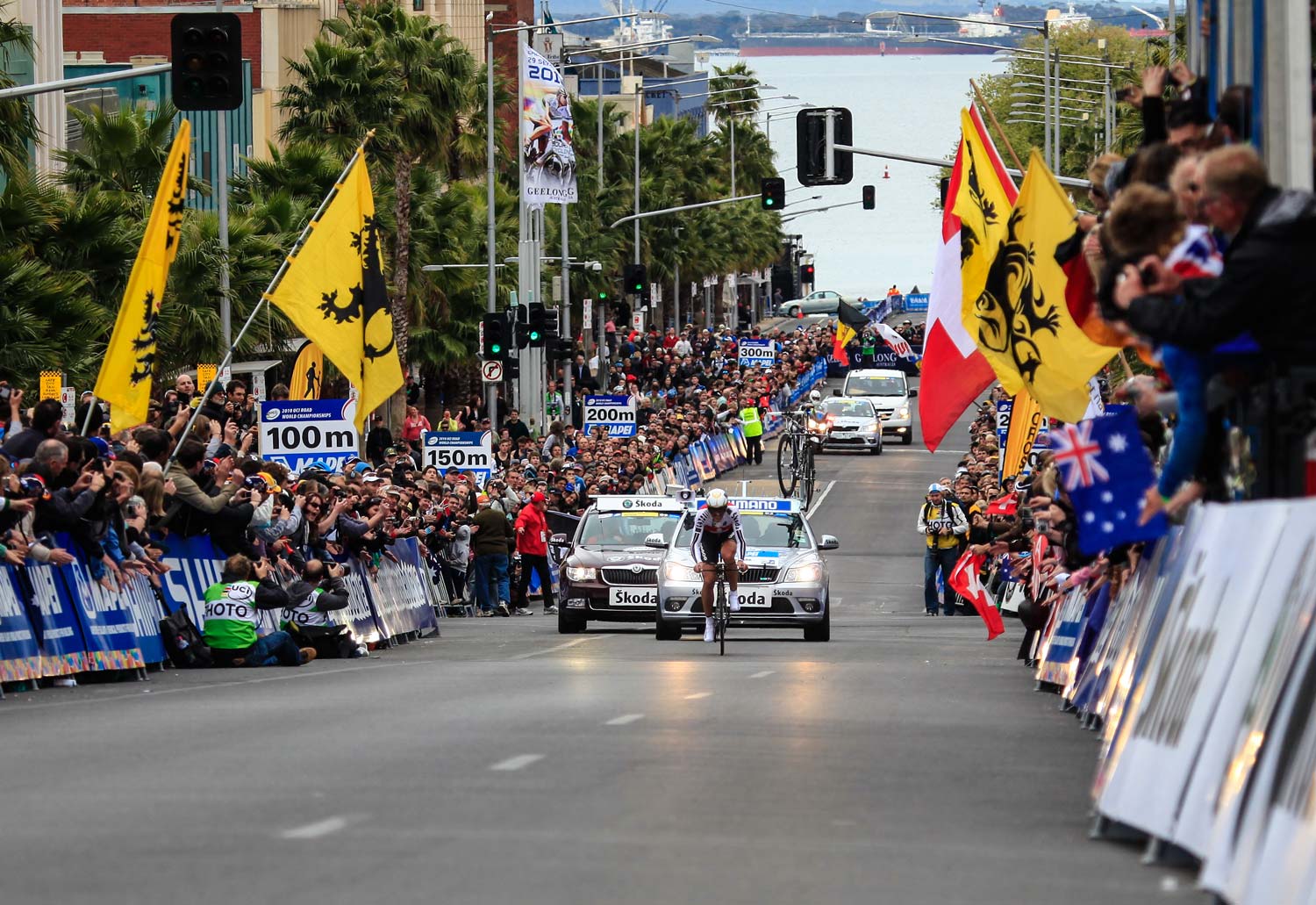 Flanders flags, hundreds of photographers, thousands of people lining the streets, and the best in the world racing. In Geelong!

Had we teleported to Belgium? Four ITT titles for Cancellara was the icing on the cake for an outstanding week of racing in Geelong. 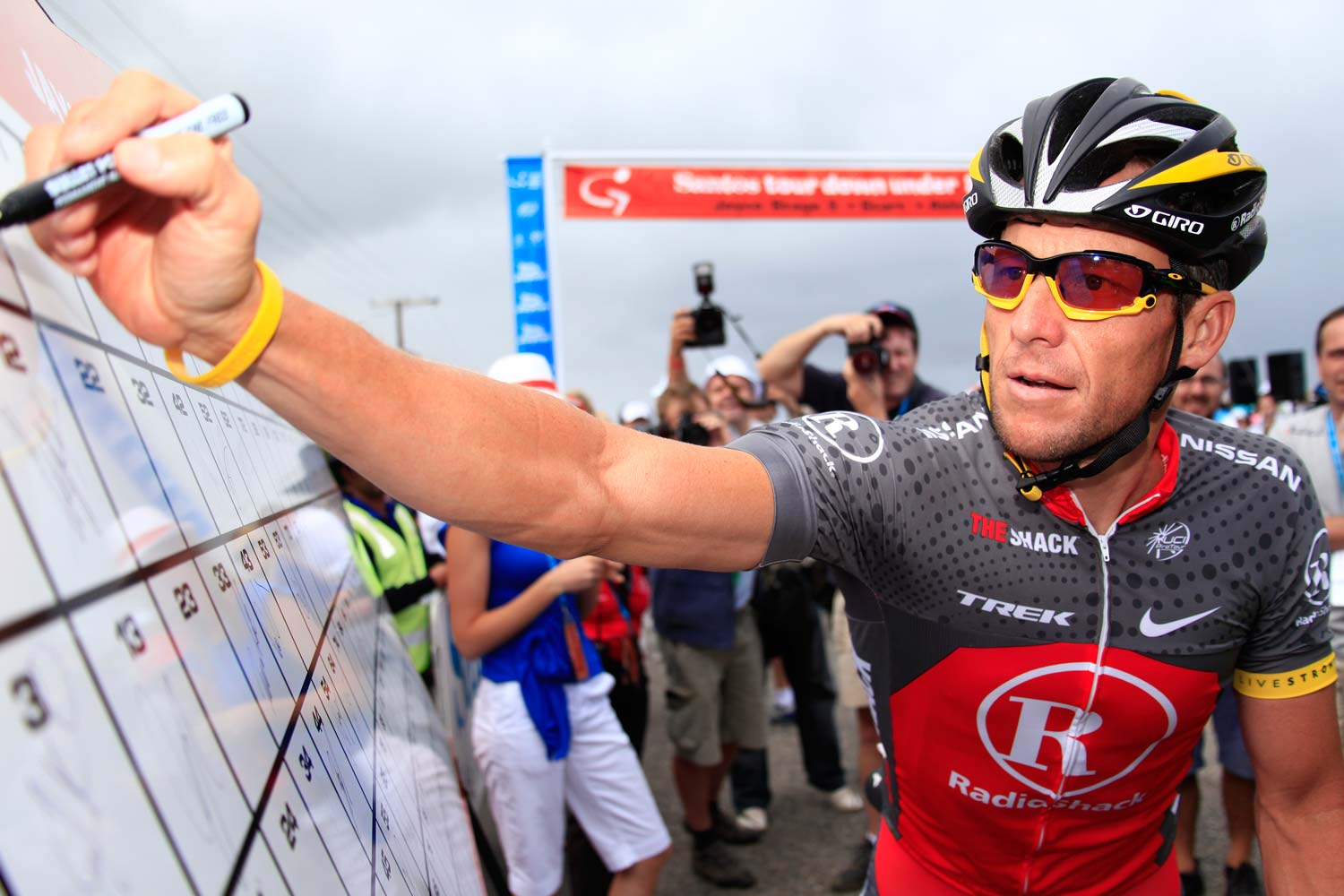 Lance? Seriously?! Yes. I’m not ashamed to admit that I got into cycling watching Lance on TV during the Tour de France. His focus, tenacity, drive and vision sparked something in me, he was like a magnet. In 2003, my wife moved heaven and earth so we could see Lance in action on the Champs-Elysées in Paris. It was incredible.

For this image, I had a vision of what I wanted – I planned it and waited at that sign-on board for over two hours. I didn’t move. I probably pissed off a lot of people, but I needed that photo. 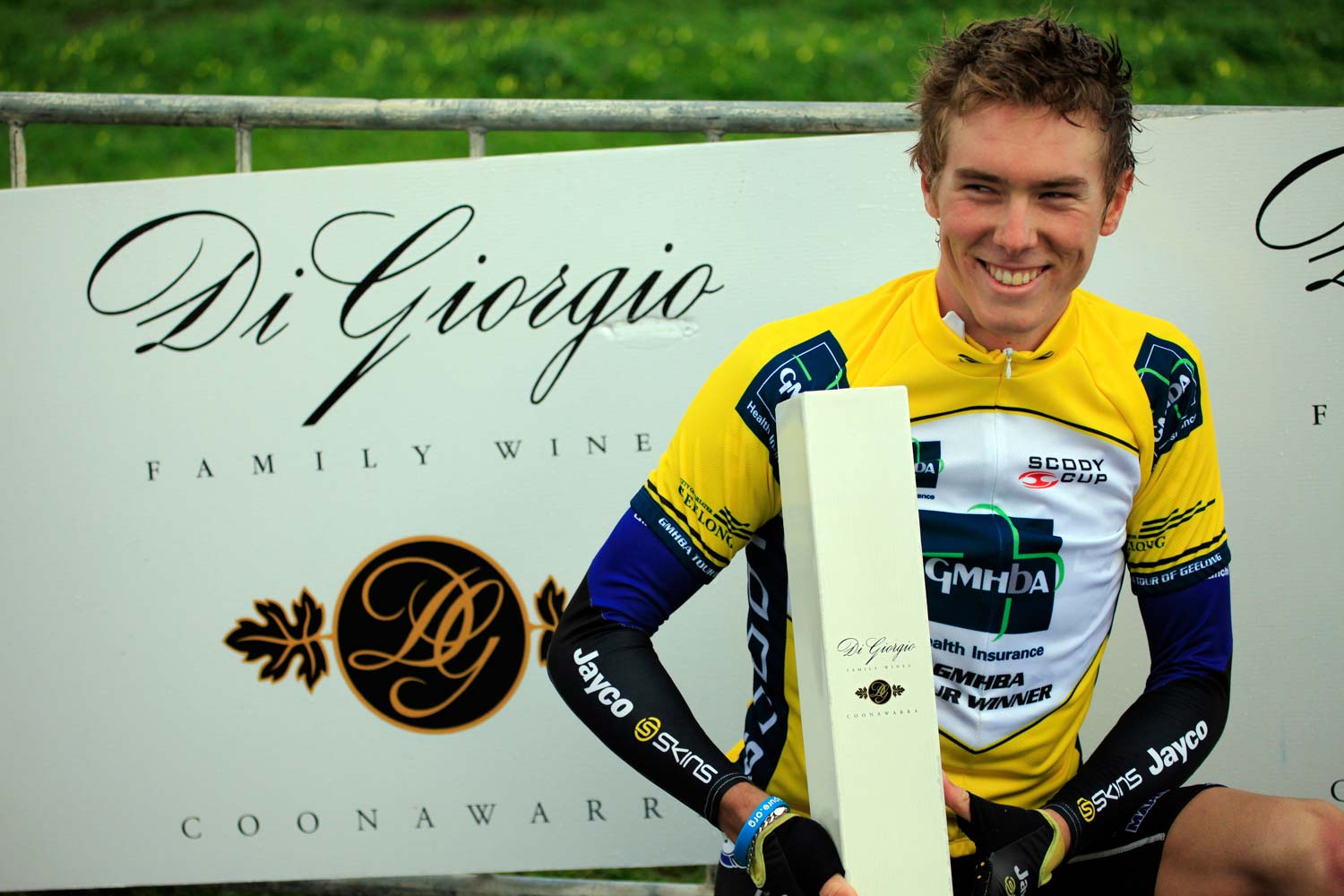 I love the National Road Series (NRS) and all its various incantations, such as the ‘Scody Cup’. We’ve lost a lot of great races such as the Tour of the Murray and Tour of Geelong. This was a curious one, riders didn’t have to race the Friday TT but could take part in the Saturday road race or Sunday criterium. Innovative maybe? In 2010 Rohan Dennis won the Tour of Geelong with such composure, the only question was when he would make it to the top – not if. 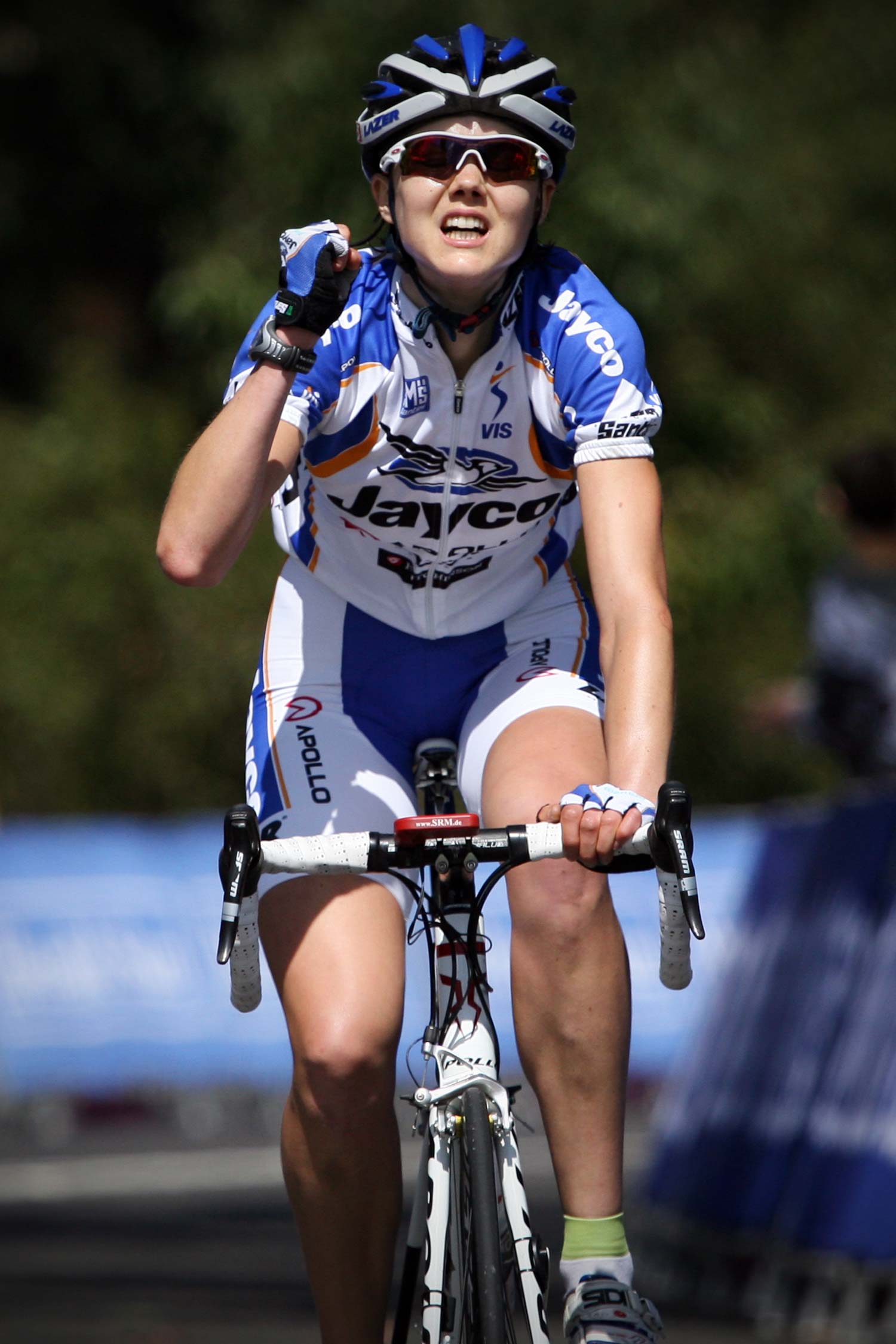 This photo nearly didn’t happen. I had been commissioned to shoot the men’s Herald Sun Tour, not the women’s, so when we got to Arthurs Seat for the penultimate stage on the Saturday with hours to spare, an idea to shoot the women’s race took hold.

As luck would have it, my moto pilot wanted to go and do some reconnaissance ahead of the men’s race, so it was on. I snuck off, figuring it would be better to ask for forgiveness rather than permission should anyone notice I was missing.

The stage was full of attacks, and ultimately it was Lisa Jacobs who would climb Arthurs Seat and take a solo win.

Lisa is a good friend so knowing what that win meant to her during a difficult time in her racing career, and having a photo to remember it by, is one of my favourite memories from covering cycling. 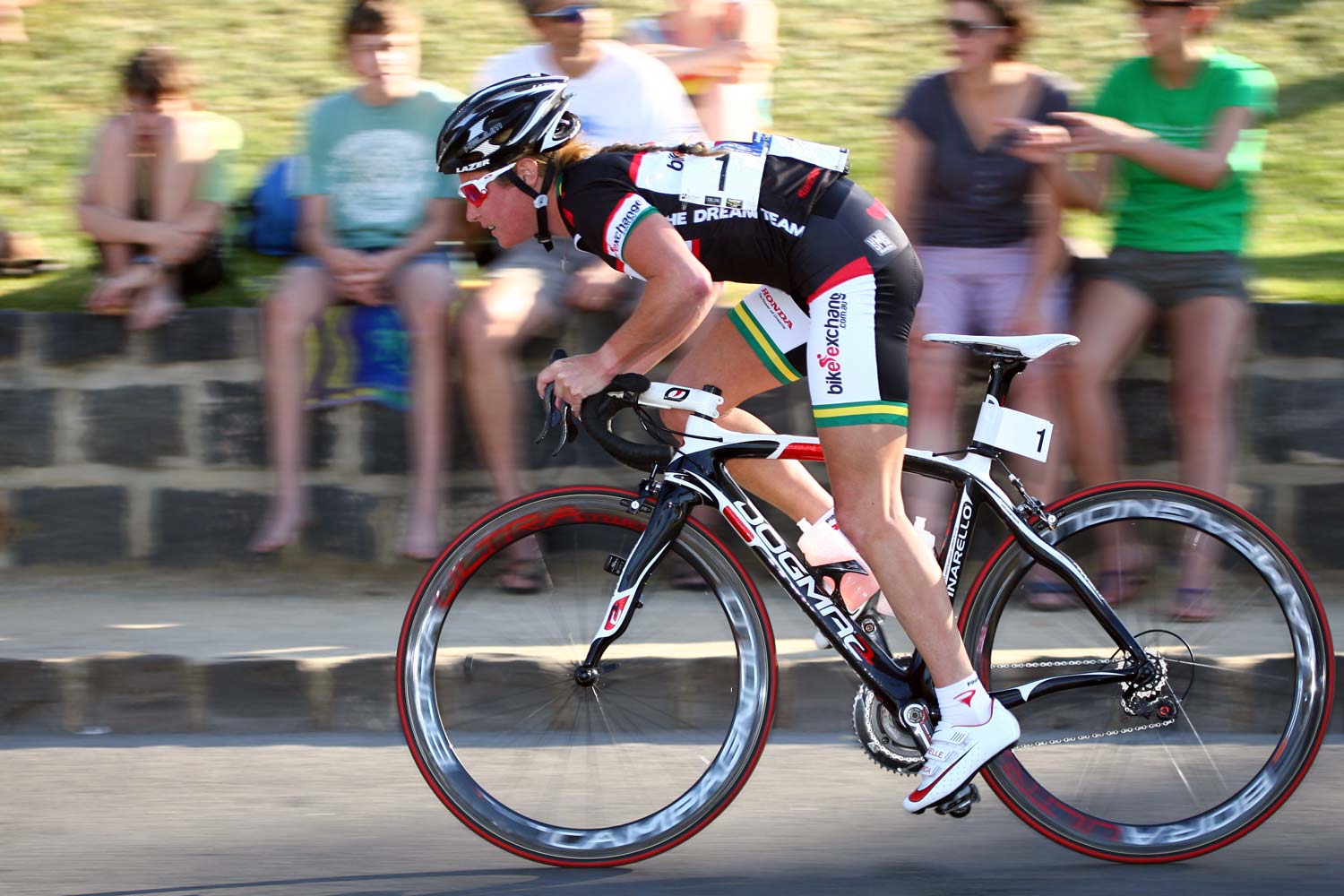 I’ll admit it, when I first started going to races, I was one of those jerks who didn’t follow women’s cycling. I’d get there as they were finishing to capture the end, and that was it. Then something happened. I began to recognise people from the same races, and some of them became friends… then I would watch more women’s racing because I knew the people involved, and became friends with more of the competitors.

See, when you know the people competing in any sport, their results and progress mean more to you.

I remember noticing how every year at the Bay Crits Rochelle Gilmore would put a ‘Dream Team’ together, and they would clean up. They were more professionally run than many of the men’s teams.

This pic means a lot to me as it was the very first time that I was able to capture motion blur on purpose while using a flash, rather than doing it by accident! 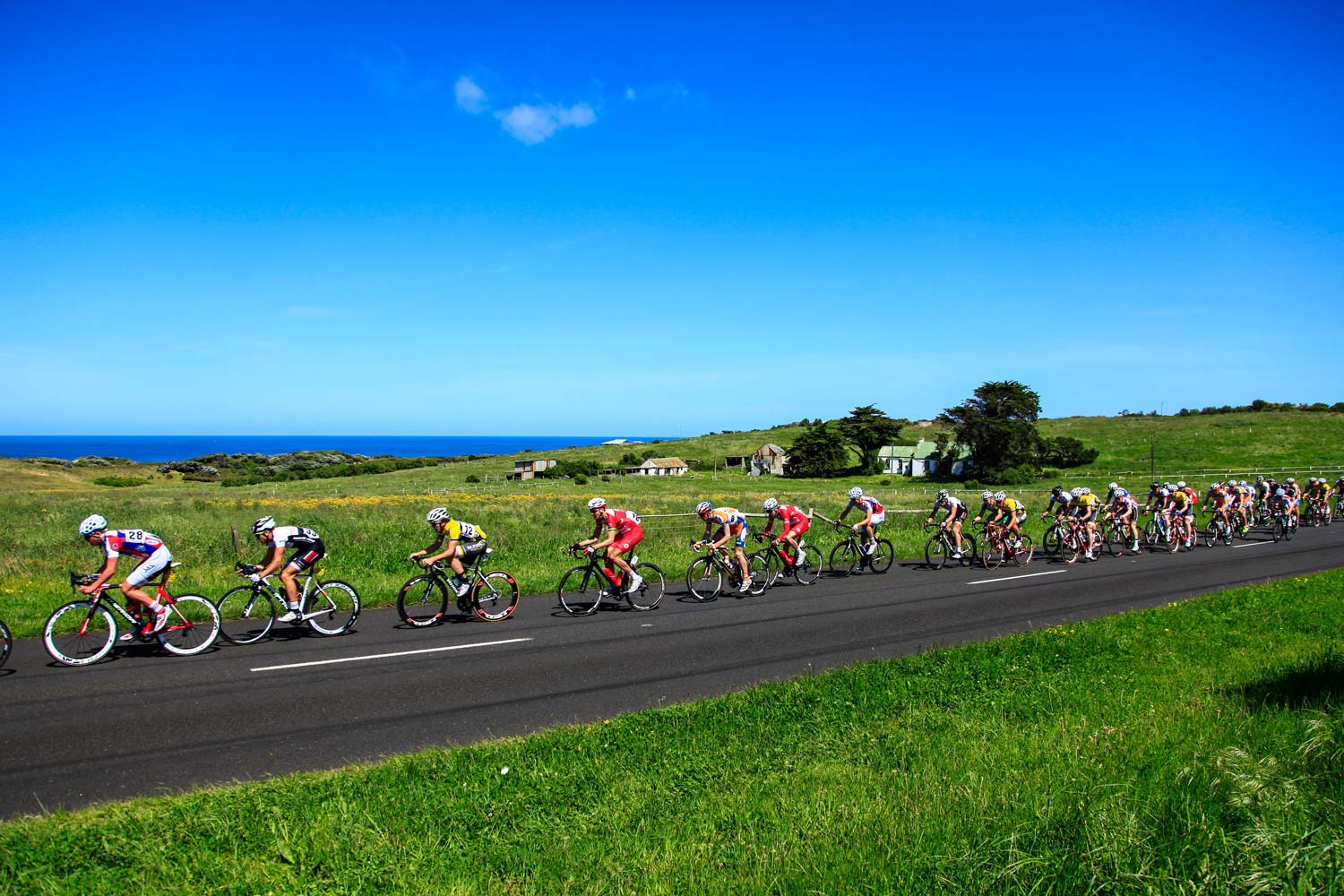 The poor cousin of the Melbourne to Warrnambool, this race was more scenic than the ‘Warrny’ as it spent a long time on the coast road, going past many Great Ocean Road landmarks. Floris Goessinen did the double in 2012, taking the Warrny on Saturday, and Shipwreck on the Sunday. 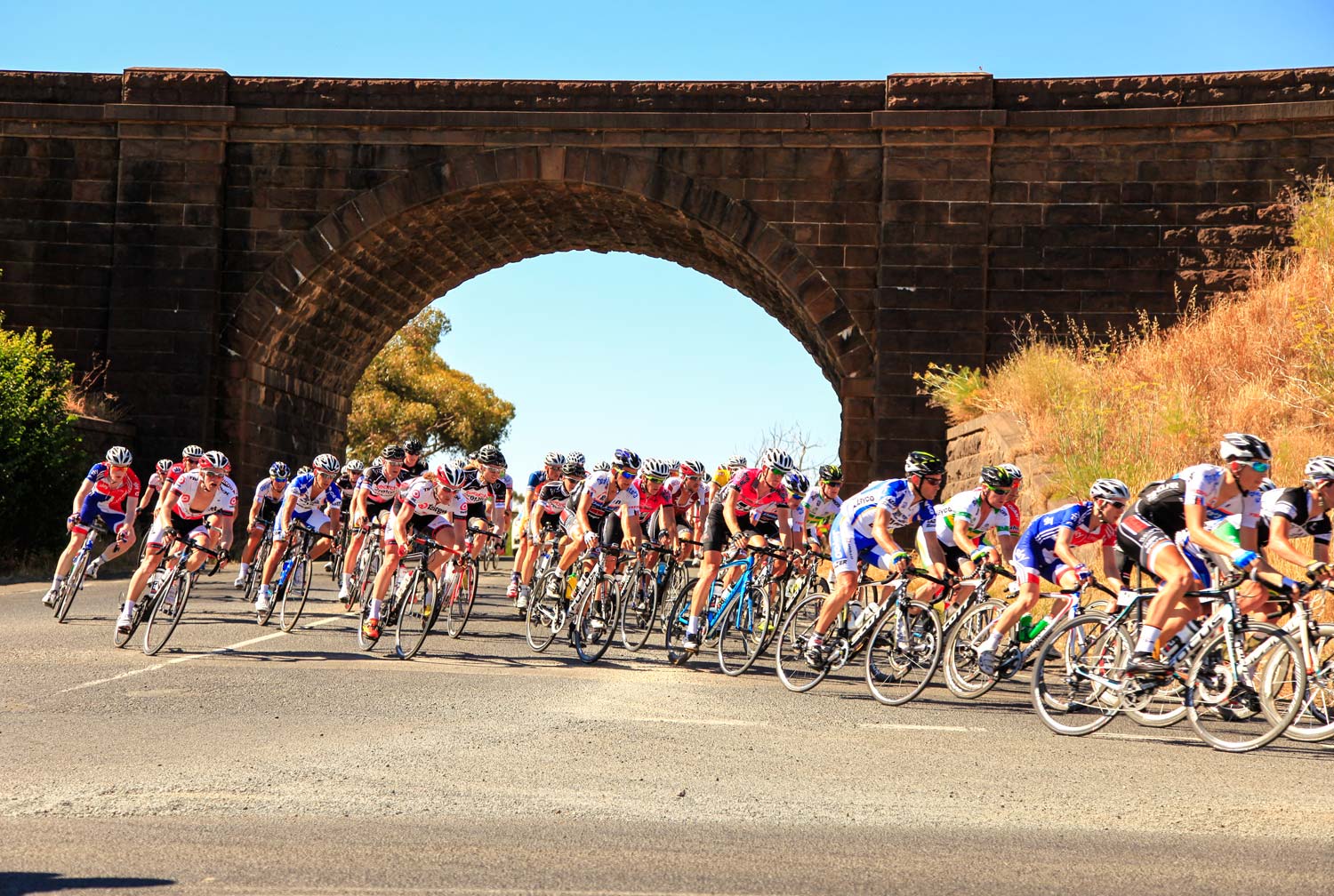 The 2013 Herald Sun Tour was the hottest race I’ve ever been at. Daily temperatures of 44-45 degrees, it was like sitting in a furnace for about four hours. On the moto it was worse because we had to wear thick pants and jackets for safety, and had the hot air hitting our faces at 80-100km/h. When you get over yourself, you realise so many people would love to be shooting the action from the best seat in the house, and you get back to the job of capturing images. 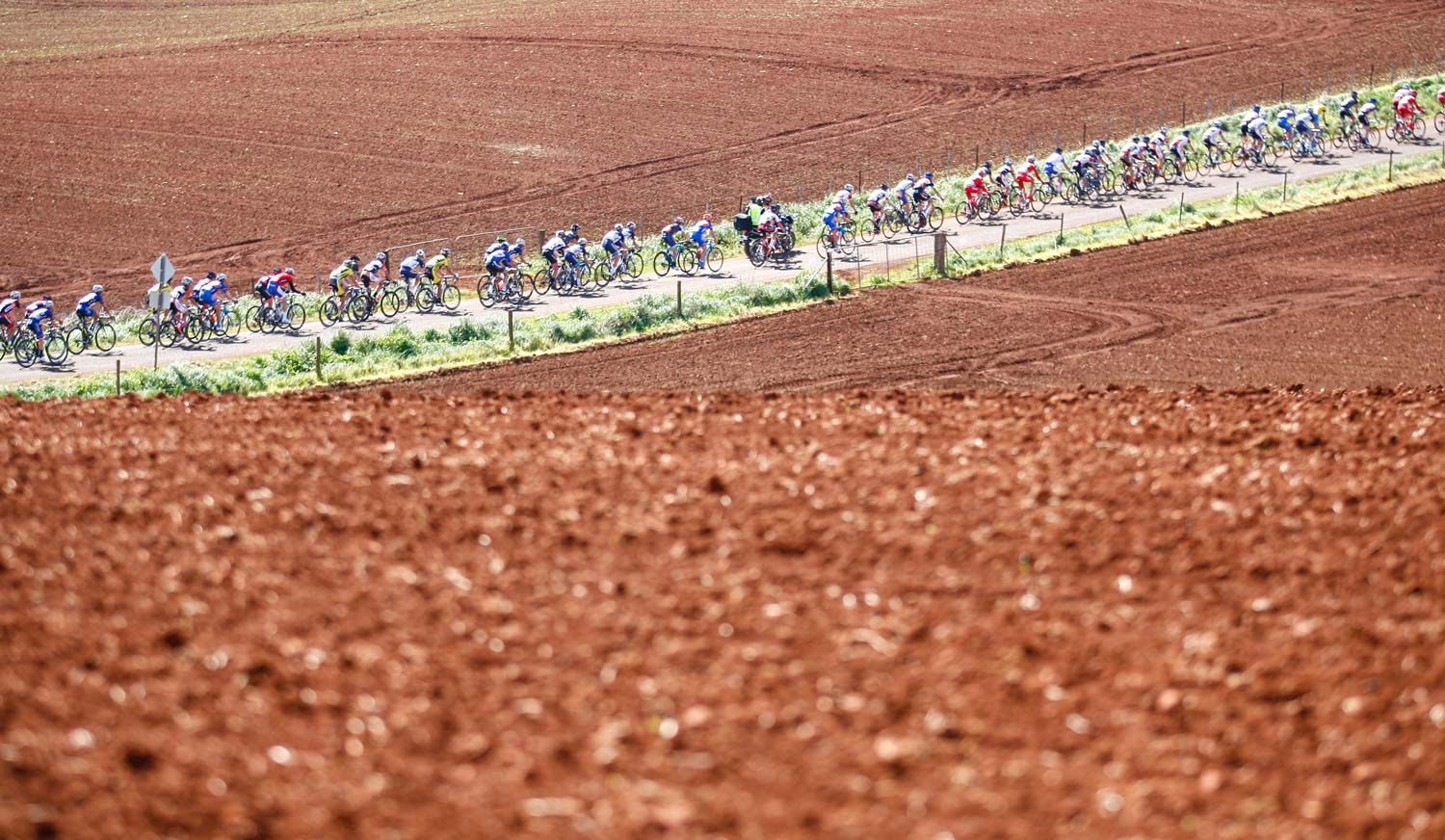 The Tour of Tasmania is so scenic, it’s hard to take a bad photo. We pulled over to get a great scenic shot of an old farmhouse, windmill and rolling green hills framing the onrushing peloton. As the riders went past, they made a right hander through brown farmland. I composed this pic and fired on the spur of the moment, and that night it lit up social media. It was the shot of the tour. 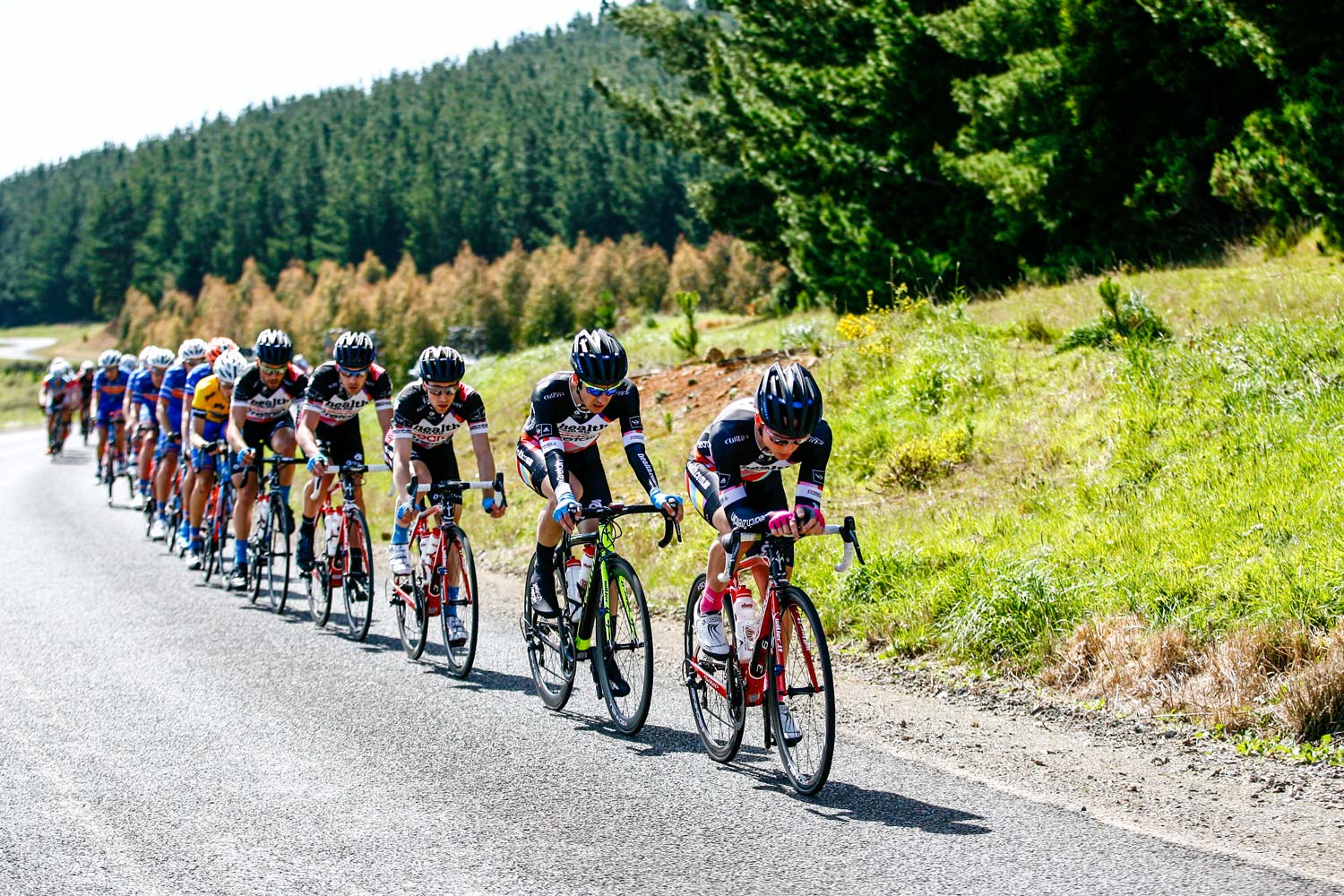 Paddy Bevin really announced his re-emergence at the Tour of Tasmania, taking stage wins on all manner of terrain and going on to win the title comfortably. What many people don’t realise is the Search2Retain team drove the front for days on end and really controlled the race, responding to everything the bigger teams threw at them.

I think people often overlook the fact that the Search2Retain team provided a platform for Bevin to get back in the winner’s circle, and were arguably just as important in his rise to the WorldTour as Avanti Racing is. 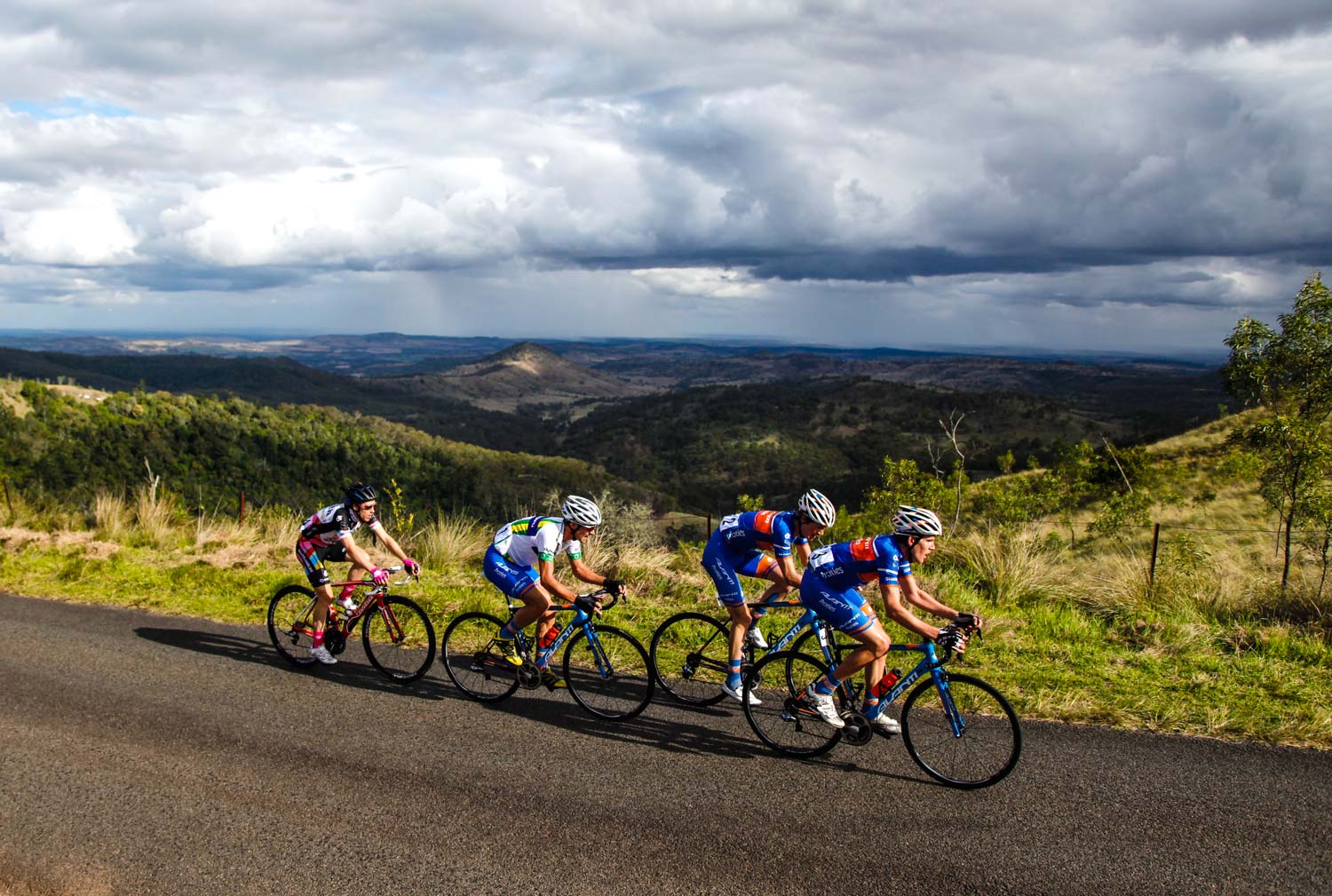 One of the best things about covering the National Road Series is the places you get to see that you otherwise wouldn’t visit. Toowoomba is one of those places. I had thought it was a hick town with a main road and a couple of service stations. Boy was I wrong! Not only did John Osborne and the organising committee put on the best race of the NRS, with proper 100km+ stages that rival events like the Herald Sun Tour, the scenery is stunning.

This photo was taken approximately two kilometres from the summit finish of stage two, and was taken out by an ecstatic Jack Haig. 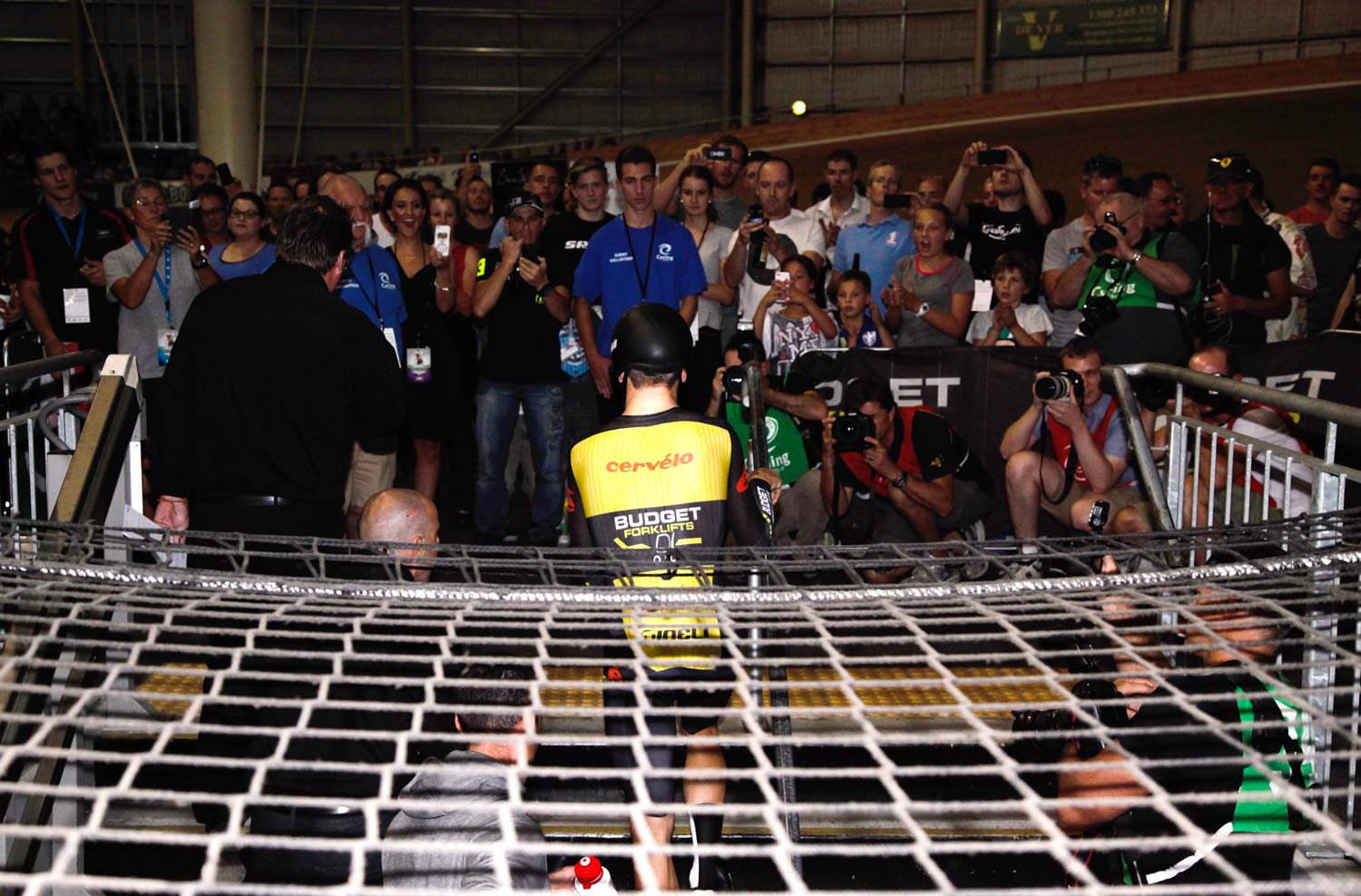 The energy at DISC was incredible for Jack Bobridge’s hour record attempt. The place was rocking, it was hot, and everyone in the building wanted one thing; to see Jack succeed. At the end, to watch the mechanics literally have to take Jack’s bike apart to get him off it was incredible. 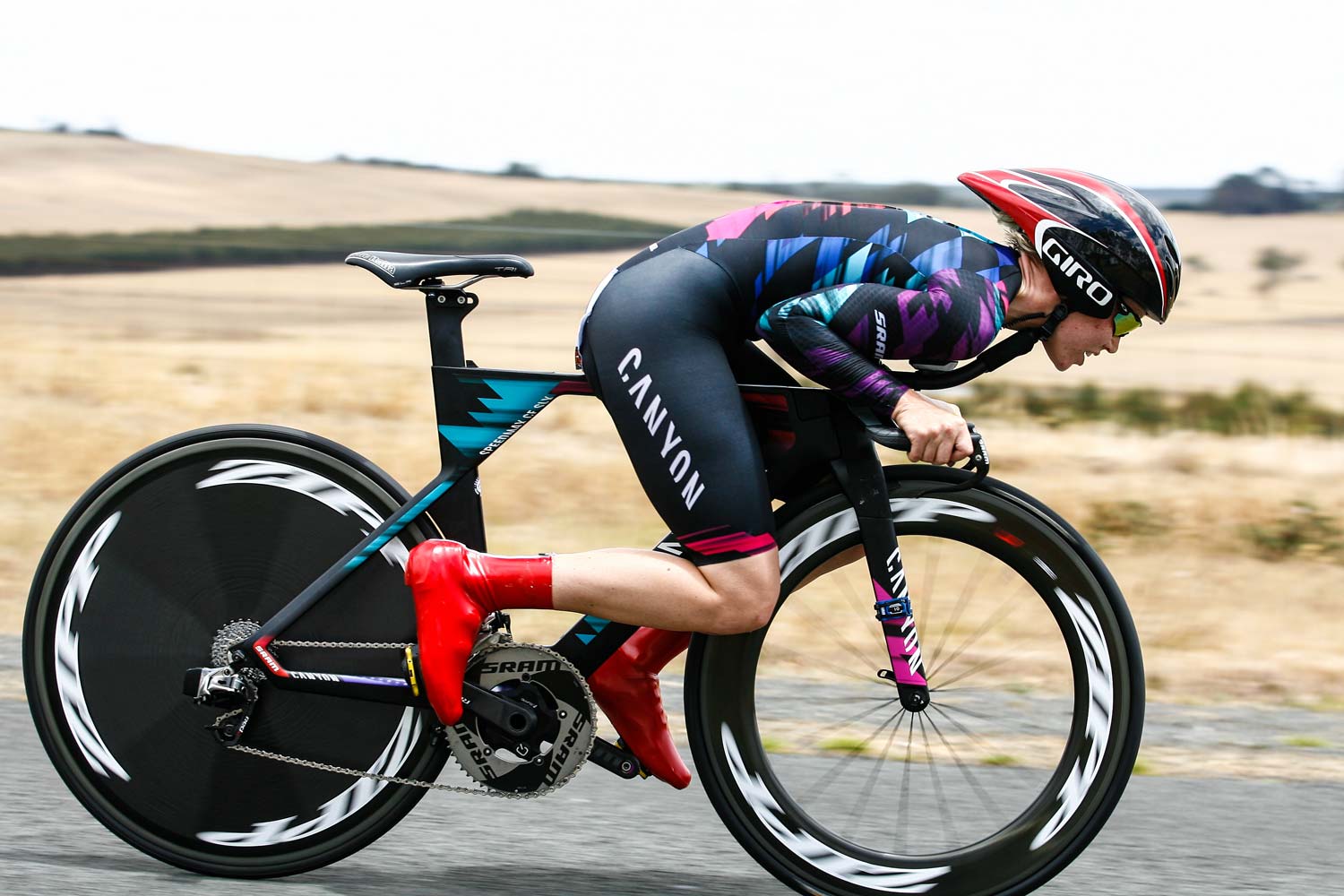 Knowing this would most likely be my last nationals behind the lens, I wanted something ‘different’ something memorable. I went out on the moto for the TT, and found an awesome descent about 5-6km from the finish line. Lucky for me, Tiff Cromwell kindly obliged and went full-aero. Surely that was for my farewell, right?

“Why no bikes?” That’s the question I get asked now. It’s a combination of things, but the biggest one is, I’m not hiding from myself anymore. For a while, I didn’t know who I was without bikes, and didn’t want to go back to past anxiousness.

Losing Mark Gunter last year had a huge impact on me too.

Mark brought such a calming energy and influence to the races. No matter how hot it was on the road, how frenetic the action, how stressed everyone was to file an image or grab a quote, Mark brought a sense of calm and fun that can’t be replaced.

That’s not to say I didn’t get frustrated. Sometimes I would see an image and think, ‘How the hell did he do that? I was sitting next to him, and my shots are rubbish!’

Have you ever watched a master craftsman plying his or her trade, someone like Lionel Messi or Brett Favre, and it looked like they were playing a different game to everyone else? The game slowed down for them.

That was Mark. While the rest of us were snatching at photos, the race would be slowing down though Mark’s viewfinder.

Eckhart Tolle may have said it best when he said, “All true artists, whether they know it or not, create from a place of inner stillness.”

I wish I could ask Mark about his inner stillness.

Life is made up of the memories you make along the way, and I’ve collected some incredible ones from the back of motorbikes, obscure towns and cheap motels all over the country. Who knows where this ride will take me next? It might even include bikes once more.