As we near the 10th anniversary of the accident that claimed the life of Amy Gillett, RIDE Media is catching up with some of the others involved in that crash in Germany on 18 July 2005. In part three of the series of interviews, we speak with Katie Potocki who shared some of her story with us late last year.

Like all the survivors, her injuries were severe, as she explained in October 2014. “My left leg was meant to be amputated on site because it was basically hanging off and it was up under my right armpit,” said Potocki (nee Brown) before listing the other injuries. “I shattered my left arm and cut up my right arm.

“I had a collapsed lung.

“I broke my right leg – my femur and my tibia.

“Mine were, in the overall [scheme of things], pretty superficial injuries that people could see.

“They didn’t really do a lot of brain scans and things like that because they were just trying to, obviously, save my leg and save everything else – me – so they looked for the obvious things.”

It’s the brain injuries that are having a lasting effect. Rob Arnold spoke with Katie again on 30 June and here is a transcript of that exchange (below). 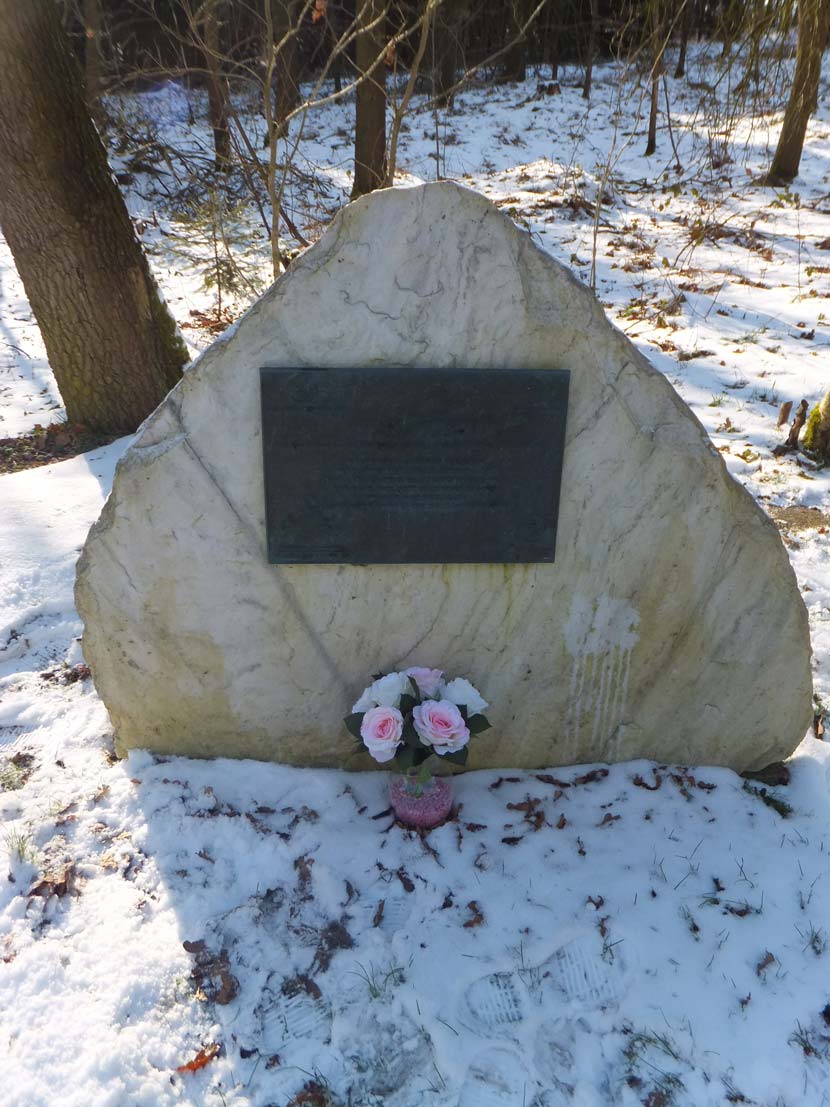 Returning to the site of the accident to get some closure… the memorial near Jena, Germany, where the accident happened.
Photo: Katie Potocki.

‘Okay, this did happen but my life is now moving on…’

RIDE: I’m talking with Katie Potocki, who was Katie Brown 10 years ago, and she is the third in a series of interviews that I’m doing about people who were involved in the accident that killed Amy Gillett. We spoke [last October] about a stroke that Katie had… but this is another catch up just to see how she is faring almost 10 years since the accident.

Hello and welcome to this series. How are you feeling Katie?

Katie Potocki: “I’m actually not feeling too bad these days which is quite good. I’m really happy with that. I’ve come a long way in six months – and in 10 years as well – so I’m pretty good.”

When I caught up with you last you were an ambassador for the Spring Cycle in Sydney and you couldn’t ride that day because you’d recently had what you’d called a stroke. Is that what the doctors are still calling it?

“Yeah, they’d been up in the air [about it] and tossing up a few different things but it has come down to that. They’ve labelled it that.

“It was pretty scary at the time because I was unconscious for a couple of days and things like that. They had called it a ‘stroke’ and that’s what I’m assuming it will be called for all-time now.”

You were explaining that, once in a while, you have little episodes where you blank out or lose some feeling and that stems from the injuries you sustained in the crash. Is that correct?

“I normally, every now and then – every four weeks now – it’s happening. I lose sight in my left eye and basically get this ice-pick headache which feels like an ice pick stabbing me in the head and I can’t do anything for a couple of days. I’m completely out with those episodes and that has all stemmed back to the accident.”

That’s been ongoing these last six months has it?

“Yes, since I had my episode last year they’ve progressively got better but they’ve also got worse at the same time; I’m not having them as regularly however I am having them worse.”

And is there a medication or are you just getting used to it and treating it sort of like a routine? How do you manage it?

“Basically I know when it’s going to happen; I get a few warning signs. Last week I got stuck at the shops for an hour because I couldn’t see out of my eye after I had an episode at the supermarket. It was pretty scary because I had it with my children – they were in the car and I had to wait [for my husband]. Luckily I’ve got a DVD player in the car so I just had to wait until I was able to see.

“There’s not a lot I can do. There is medication for it, however the medication has a lot of side effects as well so my family and I made a decision that we would just sort of monitor it and look after it without going too deeply into the medication.”

And does cycling form part of that rehabilitation, ironically, or not?

“Yeah, it does. Obviously exercise reduces stress and depression and things like that so it helps. But if I’m out riding and I can’t see, then that will cause an accident so I stick mainly to the gym these days because then I can monitor it a lot easier.”

You’ve got a couple of kids haven’t you?

“I’ve got three… Axel turns seven in October and Ivy and Zara are four.”

And you took the family for a European trip in February, is that correct?

“I didn’t take ‘the family’ – I only took my husband. The children stayed at home with my parents and my husband and I went across to Germany and went to the accident site and I just basically had some closure.”

Of the people who I’ve spoken to, you’re the first who has referenced going back to the site of the accident. You sent me a photo with the plaque in memory of Amy. What were your emotions when you went there?

“It was very surreal actually. It’s hard to explain and I tried to explain it to my husband at the time… there was not a lot of emotion there, it was like I was standing in a spot that obviously changed my life significantly, however it was sort of a distant memory as well.

“It wasn’t overly emotional but it was very moving, if that makes sense.”

And it was just the two of you standing there – like you parked your car and wandered over to where it was…?

“We flew into Germany and we drove straight to Jena and we stayed there, in the same hotel as all the parents stayed in when the accident had happened…

“We got in on the Friday morning and we basically, on the Saturday morning, went straight to Jena. We stayed there for two days.

“We had plans to stay for three, but the by the third day it was just a little bit too much so we moved on to where we were going next.”

So there was a very specific intent: you went back for the purpose of achieving closure?

“Yes, that was the purpose of going back.

“I just wanted to go back and recognise that this had happened and I just really wanted to close the book on it. I mean, there are a lot of things throughout the last 10 years that keep coming back at me and I just wanted to be able to say, ‘Okay, this did happen but my life is now moving on…’”

That’s great. And I’m sorry to use the 10 year anniversary to make you talk about it again. Does it upset you that I’ve done that?

“No, no. I have ever had a huge issue with speaking about what happened, which is a good thing.

“Now that I have been back and I have had my closure, it’s a lot easier as well because I’ve done what I’ve needed to do. It’s not as emotional anymore.”

Thanks for having a chat about it. You had a listen to Louise’s interview, is there something that she raised that resonated with you? Have you had much contact with the other people involved?

“I speak to Louise on and off. Obviously, we all have our families now and it’s hard because, as parents, you try but you’ve got no time to do anything basically. You’re chasing your own tail… and it’s hard to sit back and have a conversation with someone.

“But I am catching up with Louise next week so that will be nice.”

It seems like some of you have kept in touch and others have just gone on their own way. I know Kate Nichols doesn’t want to talk about it – she recently celebrated the second birthday of Edward, her son… but she won’t be part of this series. But everyone else seems to have some contact. Do you speak with Warren McDonald [the coach who was following in the car behind at the time of the crash while training for the Thüringen Rundfahrt in 2005]?

“Not Warren so much but I’ve had some contact with [his wife] Sian which is really lovely. She’s supported a lot of the things that I’ve done for the Children’s Hospital. I’ve had contact with her and it’s great.

“It’s really hard too because we’ve all got our own ways of dealing with things and sometimes speaking to each other might bring up these feelings that we don’t really want.”

Is there a little take home message that you have for people who have been reading this series?

“I just believe everything in life happens for a reason. ‘Tough times never last, but tough people do…’

“It was a hard thing to go through but we’ve all come out the other side and it’s even harder for Amy’s parents and Simon, as it is a significant difference now for 10 years. They’ve obviously lost a child and a wife and there’s no bringing that back and I feel so sorry for them.”

I think we all do. And I think we all have a lot of admiration for the way that the women involved in this accident have spoken about it, the courage that you’ve shown, the physical accomplishment of just coming back to have families and have a normal life. It’s wonderful to see. Thanks for having a chat and I look forward to seeing you out and about as an ambassador for Spring Cycle at the end of this year.