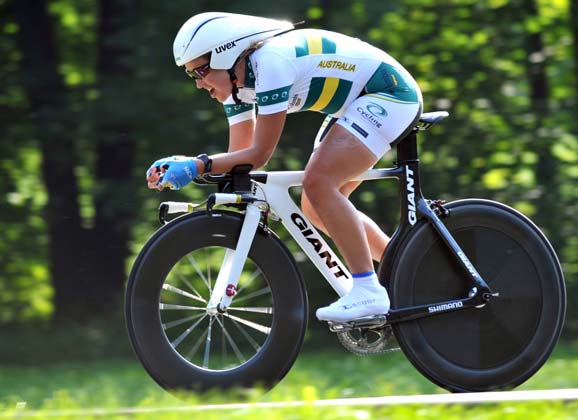 As we approach the 10th anniversary of the day Amy Gillett and five other women from the Australian national team were crashed into by a car in Germany, RIDE is publishing interviews with some of those involved. 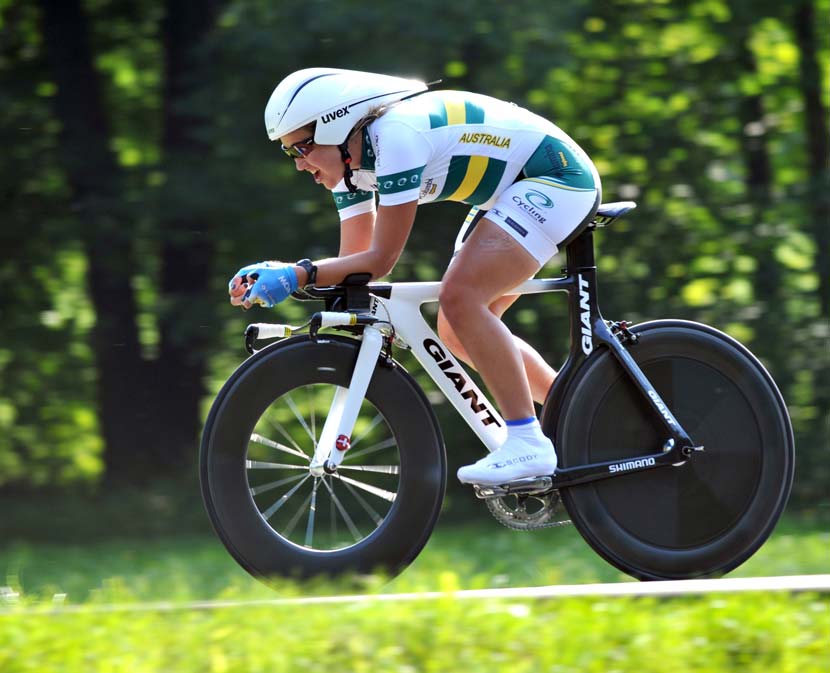 Alex Rhodes would return to international competition after the accident. She represented Australia at the worlds in 2008 (pictured), 2009 and 2010.
Photo: Graham Watson

“It’s just that split second that changed our lives forever…”

RIDE: Here we are for part two of a catch-up with people involved with the Amy Gillett crash in Germany almost 10 years ago. Alex Rhodes has got a six-week-old baby girl called Gracie and I’ve got her on the phone at the moment and I’m going to ask her what she’s been up to of late apart from getting used to parenthood…

Alex Rhodes: “She’s actually 12 weeks, so we’re starting to get to that point where she’s almost in a routine but not quite yet. At the moment it’s just a lot of nappy changes and smiling and generally talking like an idiot.”

“Yeah, probably a bit of both actually. I’m always on my toes but she sleeps probably five or six hours at a time during the night at the moment so I’m pretty lucky with that.”

I started the interview yesterday with Louise asking if [she] recognised it was the 10-year anniversary coming up. Have you noted that? Is there something in the season that tells you that that moment is coming up?

“Yeah, it’s probably the start of the Tour de France I guess is the big key that, ‘Oh yeah, the anniversary of Amy’s death is coming up…’”

And how do you treat it? Do you have a tear in your eye when you have a memory or do you have a flashback? What happens?

“For me it’s not so much a flashback, it’s probably more just that I have a quiet day or something.

“I will always remember Amy as a really good person so I just think about that a bit.”

You remained in cycling for a while, didn’t you Alex?

In other words, you made a full recovery… is that fair to say?

“Well, I don’t know. I guess that probably depends on how you mean ‘full recovery’. Was I ever back to as good as I was? I couldn’t answer that question but did I enjoy my career and finish the way I wanted to? Well, yeah. Definitely.”

And now that you’ve had a few years away from it, do you miss it? Do you still ride your bike?

“Yeah, I still ride my bike. Obviously I haven’t been for a while but I love it. Before I was pregnant and had a baby I’d still go out probably once or twice a week just when I could by myself. It’s a great way to stay fit and have a bit of fun.”

And you’re living in Adelaide?

“Yeah, back in Adelaide… actually near the beach, in a suburb called Tennyson so it’s a pretty good lifestyle.”

And every January do you get caught up in the buzz of Tour Down Under time?

“Yes because where I live is about a street back from Military Road which, as anyone from Adelaide knows, you’ll probably get about 300 cyclists down Military Road on a Saturday morning and that swells to about 3,000 or 4,000 in January.”

We have seen in the 10 years since that horrible day in Germany an enormous groundswell in cycling in Australia, particularly Adelaide. What do you think about cycling now after you went through what you did?

“I still love it, especially this year because I’ve got a little baby I’ll definitely be up there watching stages of the Tour and I still follow some of the female cyclists and like watching them do well – like Mel Hoskins and Gracie Elvin and Tiff Cromwell and Amanda Spratt, I really like seeing those girls go well.”

You were really on the cusp of that New Generation, that real influx of Aussie women who were putting themselves out there on the world stage. We had Liz Tadich – who is now Liz Taylor – from 1997 getting a [silver] medal at the worlds and then there was, of course, Anna Wilson and Kristy Scrymgeour and a whole list of those and you were in that transitional generation weren’t you?

“Yeah, I was after the likes of Oenone Wood and Liv Gollan and those girls. I had my 30th birthday not long ago.” 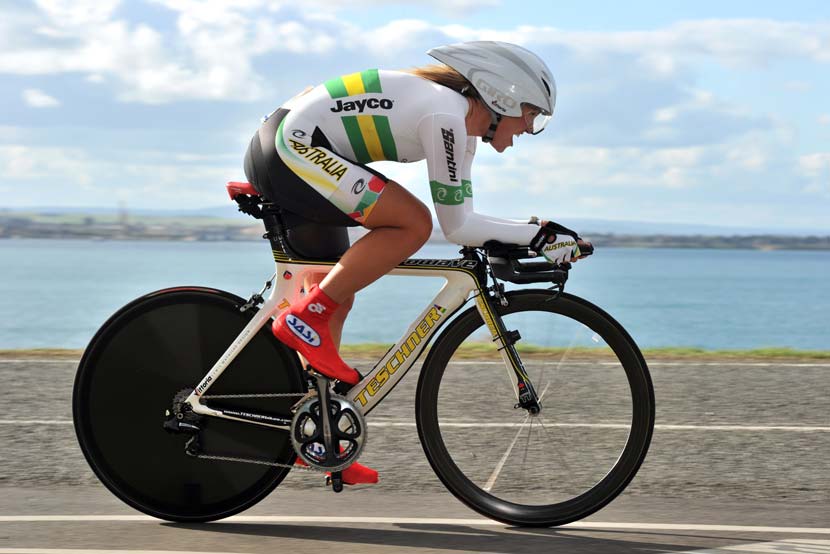 In action during the TT at the worlds in Geelong.
Photo: Graham Watson

Are you still ‘Alex Rhodes’?

“Yeah, I’m still waiting for the big proposal but I think now that we’ve got a kid together I don’t think it’ll be on the high priority list.”

Just because it’s the accident that we’re referencing – and I’m going to do it with all the girls that I speak to – but I wonder if you could remind our readers of what happened to you. Louise told us yesterday that you were beside her when the car struck. Can you explain your take on what happened and also what your injuries were, Alex? I’m sorry ask to revisit it but I’m curious.

“It’s alright I’ve been through it a thousand times in my head and over the past 10 years I’ve come to be at peace with it.

“On that day it was one of those things that the five of us will never forget but I was on the front with Amy and I was chatting to her and she had to do a time trial effort to – as you do the day before a time trial – you open your legs up and that sort of thing.

“I thought, ‘Yes! I’ve got another 10 minutes before I have to do mine…’ because we generally don’t do them together and then she started hers and Lou came up beside me. And then obviously we had the accident.

“I think I woke up eight days later and I’d had… ah, sorry it’s been a while but I had a broken nose, chipped tooth, I think I broke two vertebrae in my neck, seven in my back… I broke my scapular, my sternum, I think 12 or 13 ribs. I think four or five bones in my hand. I dislocated one or two of my fingers. And I bled into my lungs so obviously had a double collapsed lung and a lot of bleeding so I had to be on a drain for four or five weeks…

“It was fairly substantial.”

It’s totally not normal. I’ve spoken with Katie [Brown] and Louise [Yaxley] and they’ve listed their injuries and it just draws people to silence. You don’t know how to respond when that list just keeps continuing.

So you were in a coma for eight days?

“Yeah, medically induced. I didn’t have any head problems but it was just because I’d had so many fractures to my back and neck and obviously all the damage to my lungs, they sort of thought it was better to keep me in a medically induced coma to aid recovery.

“Some of the girls who I used to race with all got to have the experience of meeting my parents and they’re different sort of characters, they’re the best people you’ll ever meet. But they walked in [to the hospital room] and it was a pretty horrific scene and I’m on one of those rotating beds to help drain the fluid out of my lungs and Dad turns to Mum and goes, ‘Oh, it looks like a pig on a spit.’

By now you were awake?

“No, I was still in a coma. But Mum wasn’t really thrilled with that comment.”

Louise said yesterday that, when you’re in a coma you can hear things. And she said, ‘You know…’ and I didn’t because I’ve never been in a coma. Did you have recall of any of that time?

“No, I didn’t. I can not really remember waking up but I can remember the first few days after when I was awake and I was in Fairyland – I remember some of the stuff I said and I thought, ‘Hmm, that’s not really right.’”

And mentally are you managing?

“Yeah, yeah. Like I said, I’ve got really great family support and they’ve been fantastic through the whole thing.

“I’m really lucky to have been able to move on with my life and I am really quite happy with where I am in life at the moment.”

I see a lot of people in my very short commute texting while they’re driving and it upsets me enormously. I wonder: do you know if Stef Magner was texting when she hit you girls?

“Honestly I would have no idea. It’s one of those things: I think she was 17 or 18 at the time when we had the accident and she’s got to live with the fact that she killed someone for the rest of her life.

“Whatever she was doing, I hope she doesn’t still do it.”

Has anyone that you know spoken with her?

“I don’t wish her any harm… well, ‘harm’ is not the right word. I don’t think badly of her or anything like that at all.

“I just don’t really think about her to tell you the truth.”

What about when you see people texting while they’re driving? Is there something that infuriates you in particular about peoples’ behaviour on the roads?

“Yeah, I think inattentive driving. People should really be paying attention when they’re driving because it’s just that split second that changed our lives forever.”

And it’s a message that everyone needs to tell themselves every time they get in behind the wheel of a car.

Alex, I don’t want to really bring the whole thought process back into the forefront of your mind but it’s a pleasure to talk to us and thanks for telling us your story and sharing it with our readers.

I think you’ve done a great job and I wish you all the best in the coming years as you watch Gracie grow up and start walking and talking and all of the good things that come with parenthood. 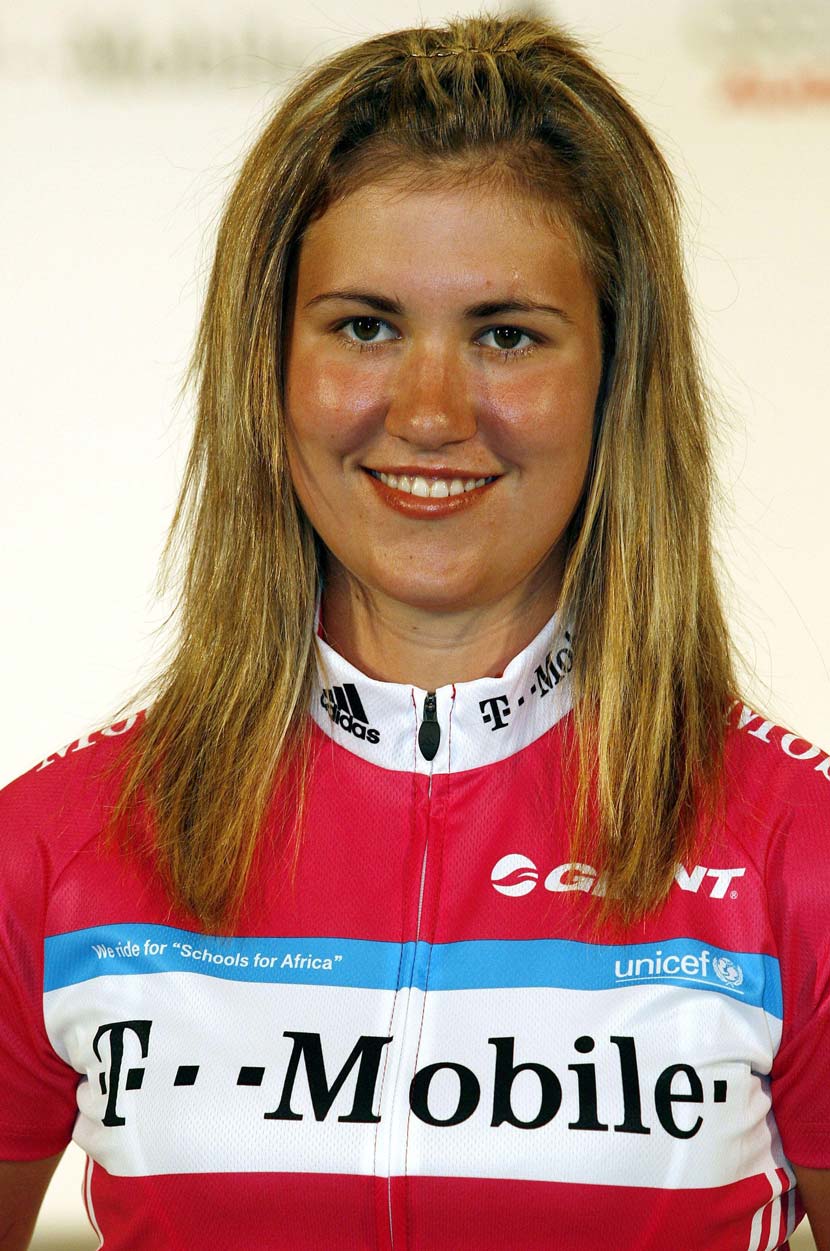 Rhodes at the presentation of the T-Mobile team in 2007.
Photo: Graham Watson