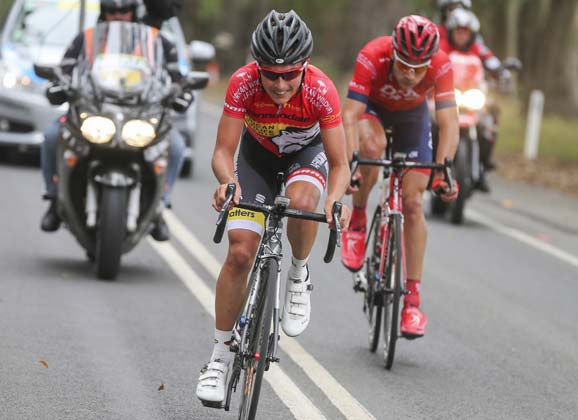 A chat with Pat… Mr Lane on the nationals

The winner of the men’s road race at the national championship would ultimately be decided from a group of seven but before they gained their advantage, there were several strong individual performances. Will Clarke offered a fine display of powerful racing, and then 23-year-old Pat Lane took a chance. We caught up with the young rider from African Wildlife Safaris team the day afterwards and had a quick chat about his attack, his power, the crowd and the vibe of the contest in Buninyong. 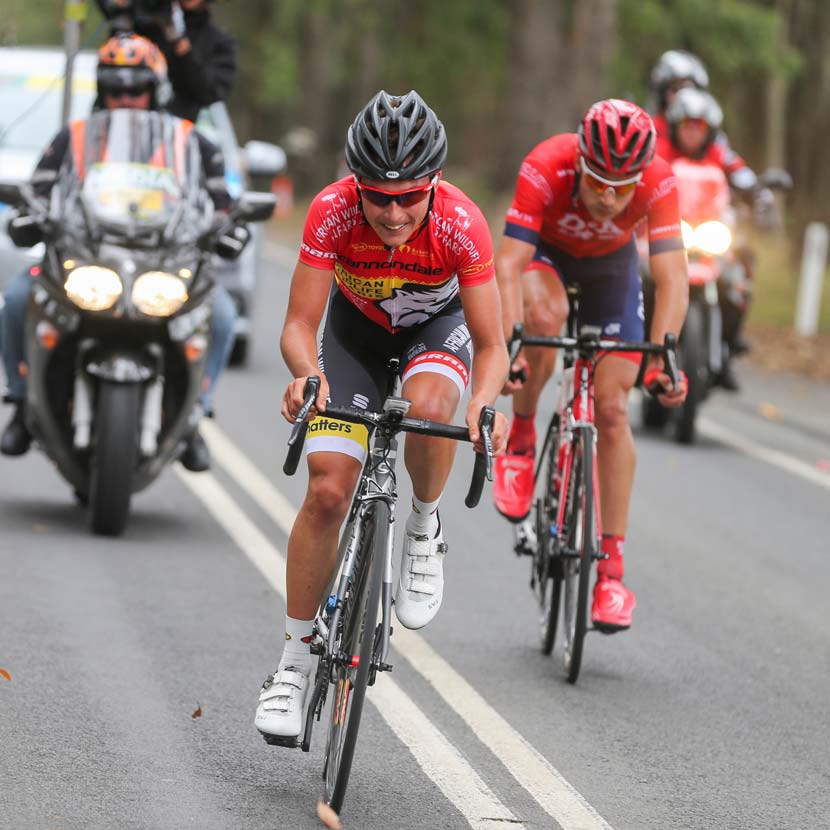 Two of the attacking riders in the national championship road race: Pat Lane and Will Clarke.
Photo: Mark Gunter

RIDE: I’m talking with Pat Lane who was on the move with a couple of laps to go [in the elite men’s road race at the national championships]. He was out on his own, unfortunately, and he just wasn’t able to sustain the pace over the fast-chasing group. I wonder if you could just talk to me about the approach that you had for the race.

Pat Lane: “Yeah, I definitely went into the race with a plan to be fairly aggressive. The main thing for me was that I wanted to finish the day knowing that I’d given it my all to try and get something out of it.

“With guys like Richie Porte and Cadel Evans, it’s hard to sit back and try and race them in the final when they are so strong.

“I wanted to try and get out in the break or something and try get a bit of a headstart. I probably went a bit too early in the end but at least I could finish the race knowing that I gave it a good crack.”

You’re one of the many blue-and-white VIS recruits that we see coming through the ranks – and have been seeing for the last 15 years… what is so special about that academy, the Victorian Institute of Sport, that makes guys like you [turn up] so frequently?

“I’d say the main part is probably Dave Sanders. He gives a lot of time and his passion for the sport goes through to the riders… that’s a big part of why they develop so many good riders.

“I went through the natural progression from there to the AIS and that’s a pretty good pathway that has been taken by a lot of the young guys.”

“I was focussing a lot on the races in January because they’re the main races for the Aussie guys over the summer months.”

So it will be NRS for you for at least a season. Will you get a little guest appearance at the AIS Academy in Varese, Italy?

“I’ve spent three years there with the Australian Institute of Sport when I was an under-23 but they don’t have any elite guys there. I would definitely like to get some results and get back to Europe as soon as possible.”

There is plenty of hype around the young talents that are emerging from Australian cycling. Caleb [Ewan] is not just worthy of the hype, he’s proving that it’s valid. Who would you nominate as The Next Big Star?

“I think Rob [Power] has already shown himself. The three races he won in Italy last year and with his performance in the Tour de l’Avenir, he’s already shown that he can be at that level.

“The Aussies… every year there’s two or three of them who come through and seem to excel. There’s always going to be a good line of talent coming through now.”

Can you talk to me about that lap when you were on the attack at the nationals and how it was tunnelling your way through the crowd of people at the top…?

“It’s an incredible atmosphere. You ride along and it’s just shoulder-to-shoulder with people and they’re all shouting… especially as I’m from Victoria a lot of people up there I know – and they know me – so they’re really vocal in cheering me on. It’s similar to what the Tour de France looks like on TV.

“It’s wall to wall people, especially at the top of the climb.

“This is one race where we really have that atmosphere; it’s a bit of a circus and it adds to the spectacle.”

You’re a Melbourne boy and you’ve got a good following up in Buninyong, obviously. What is it about that part of the world that attracts people to sport?

“Cycling is huge everywhere in Australia now. But I think the effect is added to each year because everyone goes, then tells their mates how good it is.

“A lot of people complain about the circuit because not many riders can win on it, and that it’s a bit hard… but two sprinters – or two ‘complete’ bike riders who have a talent in sprinting – got first and second on Sunday, so it goes to show if you’re good, you can get around it.

“But because it’s been in the same place every year, everyone knows what they’re going to get and so each year you get more and more people turning up.

“I’m a bit of a climber myself so the course suits me… but for cycling it’s good. If you changed the location, I don’t think you’d get half the people there.”

Let’s get into some technicalities of your ride. Did you ride with a power meter?

“Yeah, I had a Stages power meter. I can send the data through…”

What were the take-home messages when you had a look at the data after the race?

“There was no extremely high five-minute power or anything but overall, it was nearly five hours, and there were definitely no real easy parts or anything. It was a solid day, especially when I was up the road… it can end up being quite a tiring day.”

We hear about output of sprints or on climbs but let’s, for example, think about when you’re on your own trying to stay away from the chase group… were you pushing much power on the descent?

“Yeah. I looked at it afterwards for a fair while. I averaged about 300 watts when I was away.

“On the climbs, I was trying to ride at about 350 watts and sit on that. There was a fairly strong headwind, so I had to push on over the climb and I think that benefitted the sprinters… they could follow a bit more on the climb.

“But I was just trying to get around the course as quickly as I could.”

When you are riding into a headwind on a climb, does it alter your method? Would you normally dance around out of the saddle a bit more? You looked rock-solid and planted in the saddle on Sunday – there was no hip sway… I tweeted that your positioned looked fantastic. Would you agree?

“I was thinking back to a lot of the efforts that I’ve been given to do by different coaches and I was concentrating on getting myself into a decent rhythm and doing what I knew I could sustain on the climb.

“With four or five laps to go I was thinking about what I could do on the climbs and not explode too much. I’ve watched the race other years and guys who have been out in front have hit a wall so I was pretty determined to try and do something good.”