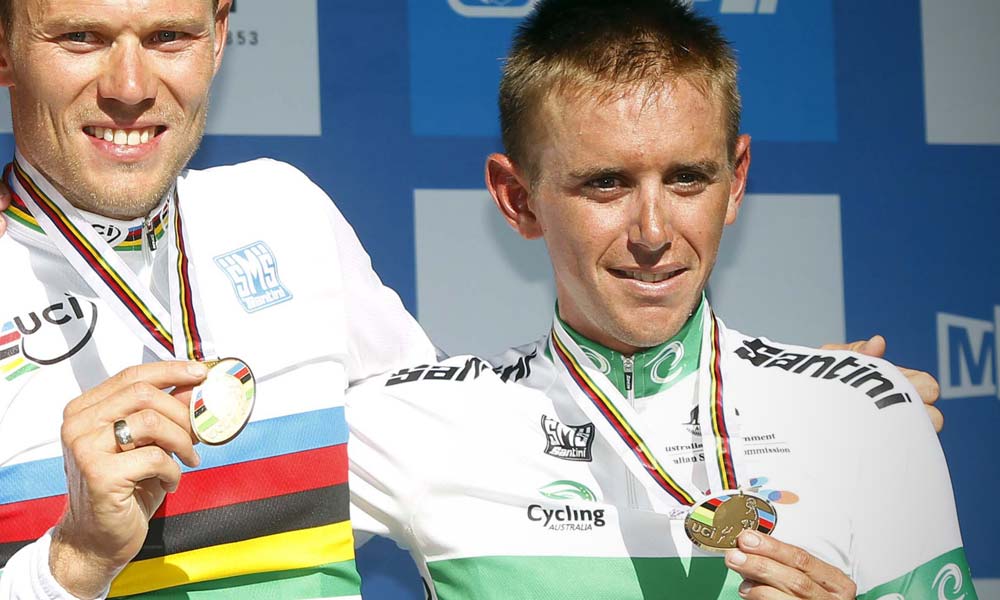 Adjusting to something new: Allan Davis

It’s day one after announcing that we’re going to ‘transition’ to a new phase of media delivery and the concept conjured memories of a discussion from a few years ago. I spoke with Allan Davis on the eve of the 10th anniversary of Operacion Puerto.

The ‘Bundy Boy’ was meant to race the Tour de France in 2006 but his team was evicted at the Grand Départ. He went through turmoil because of this doping investigation. And while we’ve known each other since he was a teenager on the cusp of a professional career, we never got around to discussing what went on in those odd days.

Last year we spoke at length about a range of topics. The first part of the interview was published on ridemedia.com.au in June 2016.

The second half was typed out long ago… but never shared. Until now.

Davis remains involved in cycling long after his racing days. He has managed the transition to ‘what comes next’ and continues to enjoy time on the bike.

Below is a transcript of the (very long) discussion… 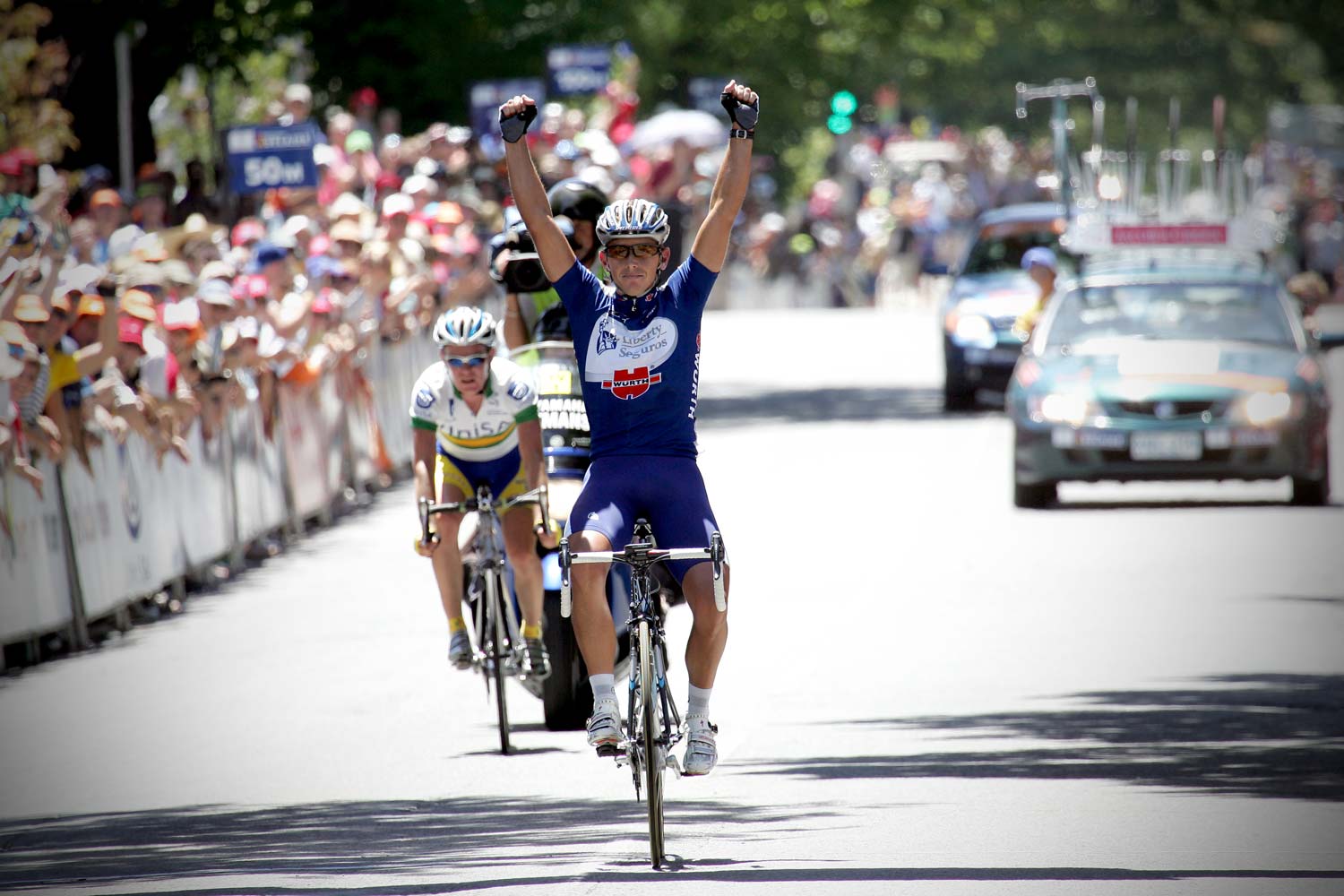 (The first part of the interview is here: but this transcript is from 16:01 onward in the SoundCloud file.)

Going through the sequence of languages, you began with the roll call of teams. You got up to when you moved to Spain but let’s go on from ONCE-Eroski. You referenced 2003…

“There was Mapei before that. I didn’t say it but that was my first professional contract, in Italy. That was in 2002 and I moved to ONCE-Eroski in 2003.”

I actually caught up with Chiara Sassi today and we talked about her father, Aldo. I know you had quite a lot to do with him as well. What recollection do you have of him? He had a big part to play in Australian cycling…

“Yeah, he was my first coach as a professional. Basically from the AIS days when we were set up in Italy with Brian Stephens and Shayne Bannan.

“Brian was my coach and then, turning professional, it was Aldo – he’s the guy I spoke to every day, the guy who was in charge of myself and Mick Rogers and Cadel [Evans] and Scott McGrory, the four of us Australians who were in Mapei at that time.

“We had a lot to do with Aldo. He was very intelligent, a very good coach. He was a very good communicator. We formed a really good relationship and he is an important part of cycling in Australia too because Mapei invested a lot of time (and money) into the AIS, into Cycling Australia with sponsorship.

“We got tested in VO2 max and all sorts of stuff through the Mapei centre that they had, where Aldo worked every day.

“We were under his wing from a young age. And turning professional he was our coach.

“Apart from those years at Mapei we stayed in contact. We had formed a relationship and he was a good mate. We always made time for each other when we could and said, ‘G’day…’ and it was very sad when he passed away a couple of years ago. But he was a big part of my career in the early stages and a big part of cycling.”

Here we are three years after you retired and we are talking about the past of cycling and it’s got interesting reference points all the way. It’s been a bit unfair of me in recent commentary where I’ve said that when you retire as a bike rider it’s unfortunate that all you’ve got to do is talk about the ‘Glory Days’. I guess that reference is to the racing itself. But what we’ve discussed already covers a lot of bases and we’ve hardly talked about any of your actual cycling. It’s quite interesting.

And I guess what’s great about us talking again is that, first of all, I’m back on the bike and enjoying it. And you are too. Just before we led to this interview, you started talking about the nature of your clients and how they like to ride. You were saying that they were strong enough to beat Strava KOMs but they basically were riding to enjoy themselves. How much of the technology is infiltrating the experience with your clients and how much of it is just the environment that makes them happy on the bike?

“The majority of social cyclists or competitive cyclists have a Strava account or a Garmin or some sort of GPS device so it’s really cool. It’s a great apparatus that we can use these days and we can see what times someone is doing anywhere in the world.

“But these days all my riding is about enjoying the bike. I don’t try and break any records or try and set any goals of going fast, especially up hills.

“The majority of my clients are in the same boat as me but I do cater for guys who want to set a Strava record or who want to take it to the ‘next step’.

“One of the Canadians is 60 and he was training for the national time trial championships. That was fine. What I do in that sort of scenario is, I get a guide to work with me – someone who obviously goes really well on the bike – and can always stay with the clients who want to test their legs up a climb or want to go hard on the flat. That’s all catered for with my company.

“I pretty much stick around with the guys who want to come along and just cruise along and enjoy the scenery and get a good feel for the bike and riding in a different country with a different culture. We’ll stop and take some pics…

“I cater for that style of client and some guides who come along, ex-professionals as well, hang around and make sure the guys who want to go fast are looked after as well.

“And we always have a beer or a wine at the end.” 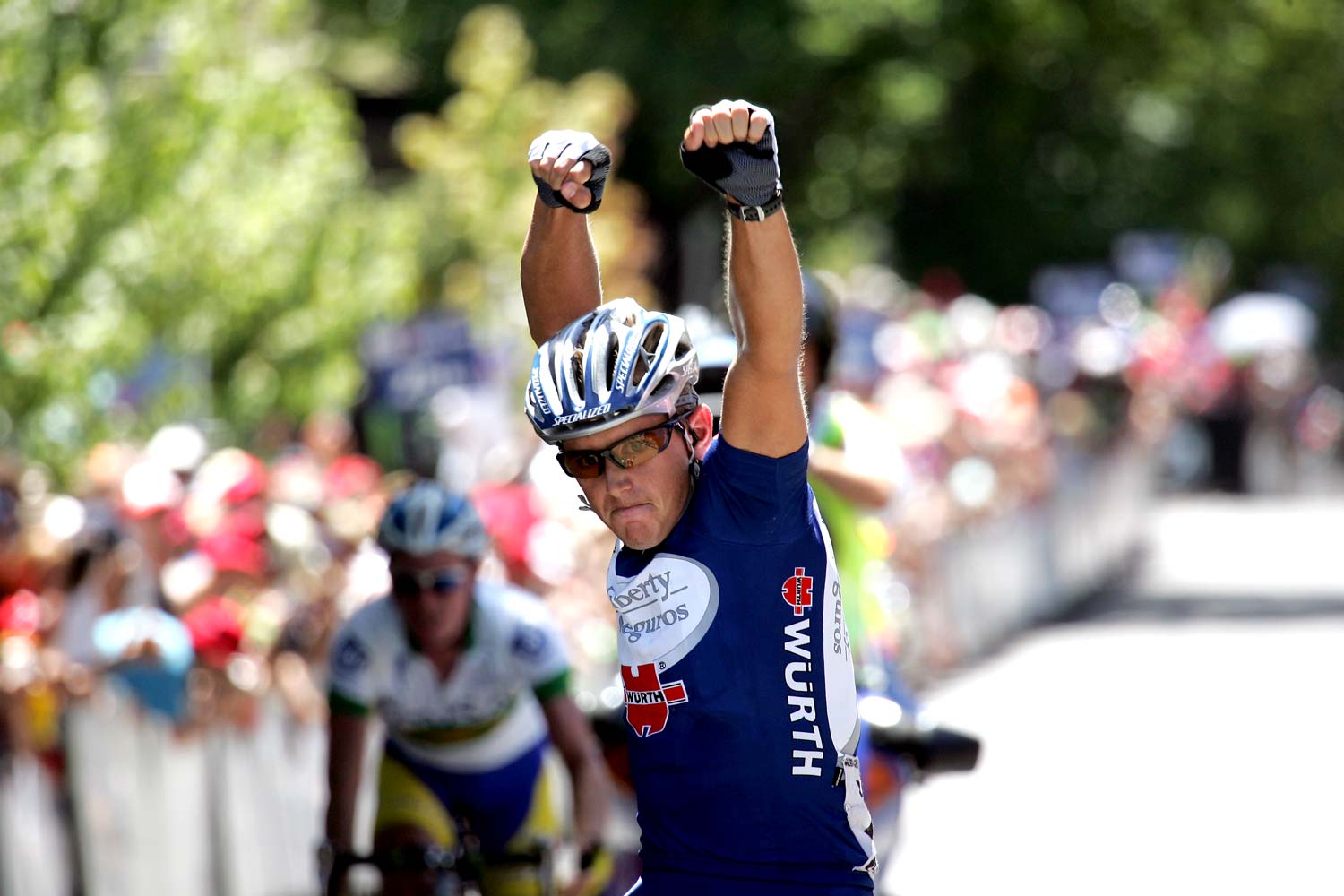 It’s back to The Joy of Cycling. And we could almost hark back now to Bundaberg and why you started. Let’s consider that topic later but, right now, go back to the sequence of teams because you ended up at Liberty Seguros in 2004 and that continued through until Strasbourg [and the Grand Départ of the Tour de France in 2006]. How was that experience in that time? Because we know now how rotten 2004, 2005 and 2006 was. How do you view that?

“The people didn’t forget that later on in life, at the end of my career.

“It was a goal of mine when I first started cycling, I wanted to win a race every year of my career. And I did 10 years of that. I’m very proud of having that statistic; to be able to win a race 10 years running. That’s very consistent. That’s a very good feeling to have as a rider.

“In those first five years, up to 2006, I was winning a couple of races a year. I wasn’t setting the world on fire but I was around the mark and getting my name cemented in the world of cycling.

“That’s pretty much how I got the contracts. Obviously, as I got older I got stronger and those couple of wins turned into five or six [per year]. So it was a very important time of my career.

“And with Liberty and ONCE, we all know what happened in Strasbourg but I didn’t know that was going to happen. I had no involvement in it whatsoever but I can’t take away the fact that it was a positive time in my career, those five years – those first five.”

We can stall at Strasbourg but I guess, for people who don’t know the broader picture, I can recount it because I know that it was a big deal in your life. And it is another reason of why we’re talking. Do you mind talking a little bit about that day – or those couple of days – before the eviction?

“Uhm. I don’t mind. I’ve got nothing to add. I had no idea about it but we can talk about it, for sure.”

I’ll just put it into context. It was 23 May 2006 when your team director (Manolo Saiz) had been arrested and it became an investigation known as Operaciòn Puerto, just to paraphrase what went on. What had been Liberty Seguros had turned into Astana prior to the Tour de France because of Saiz’s arrest. Alexandre Vinokourov had taken over and a new branding had come forth – and it was named after the capital of Kazakhstan. And so [the team] was presented and my memory of it is that you went down a river on a barge and then stood on a podium in Strasbourg and you did your presentation. Alongside you was the likes of Alberto Contador, Isidro Nozal, and a whole range of others and ultimately, of the nine, six were implicated in this thing that had become known as Operaciòn Puerto. Your name was added to the list – or something.

What was the sequence from your perspective? Because that is roughly the public perception of what happened.

“Yeah, well like you said, the general manager of the team I was racing for got arrested in May. And obviously that was all well known within the team and with the general public. The sponsor at the time pulled out, Astana came in and took over with ‘Vino’ and [Andrey] Kashechkin, another Kazahk rider, which was good – we could still continue our racing program.

“It came to the Tour and I was always down to ride the Tour in 2006. The guys that were involved obviously wouldn’t go to the Tour after what happened in May – and the Tour being in July – so I went to the Tour.

“One day I was there and eventually I got not even a phone call. One of the directors said, ‘Your initials are on one of the thousand page document that was presented with the Operaciòn Puerto case…’ on whatever number of the pages. And so that was enough for the organisation of the Tour to say that Allan Davis was involved in the case.

“I was obviously one of those six who you mentioned and the team didn’t start the race.

“Within nine days I got an official document from a Spanish judge saying that I am now out of the case, I had nothing to do with the case, the evidence was not sufficient… all this sort of politically correct sentencing and that was it.

“But obviously the damage had already been done to my image in those nine days.

“Obviously getting kicked off the Tour de France, the biggest cycling race in the world, it was all very hard for me and my family – and still is today to talk about it.

“I shouldn’t have to be answering this question about being involved with a doctor that I’d never seen or never met in my life.

“It was pretty hard for me at the time and still is now.

“That’s pretty much what happened. And I continued to do my career.

“I was lucky enough to get signed for another good team and I continued racing until 2013.” 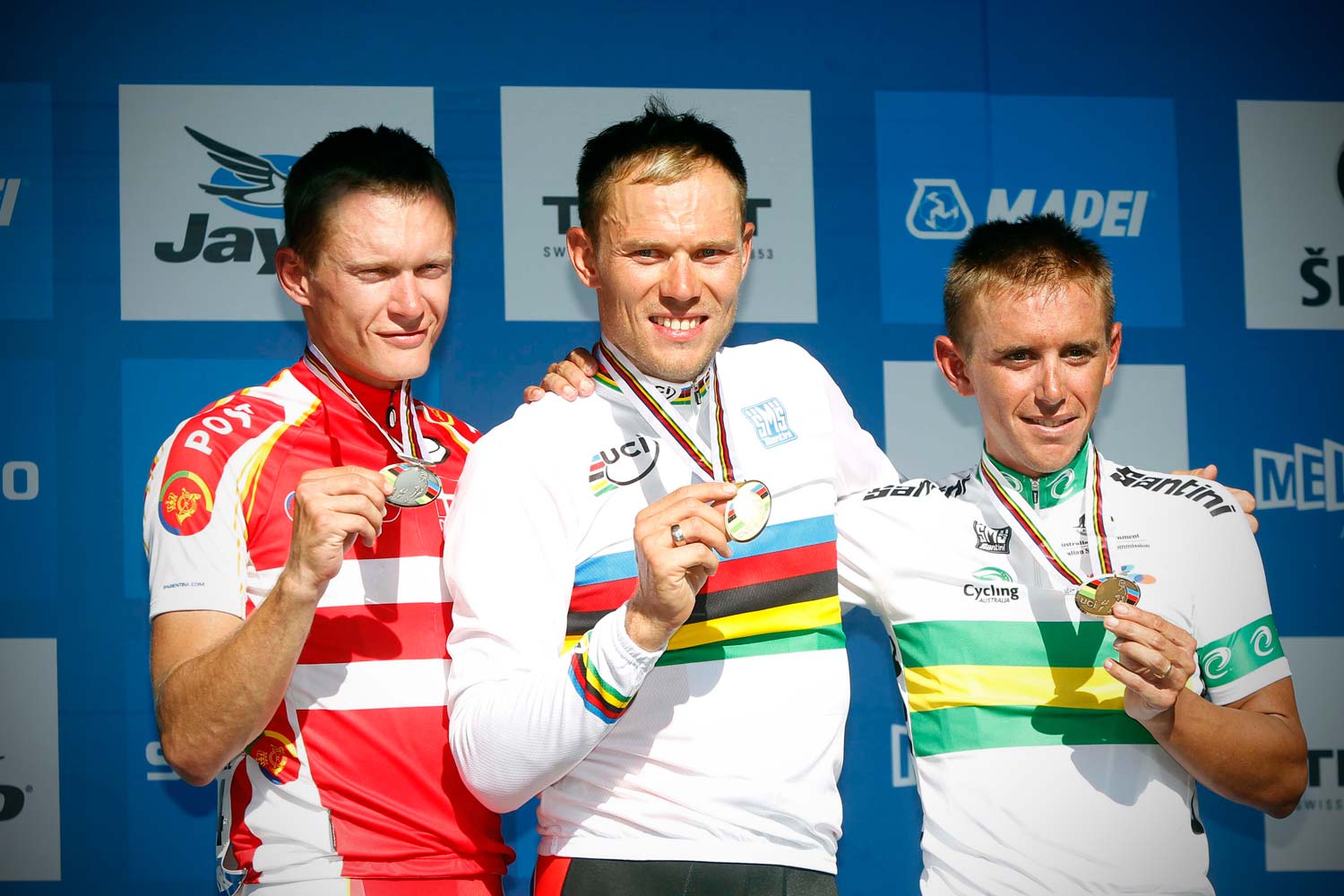