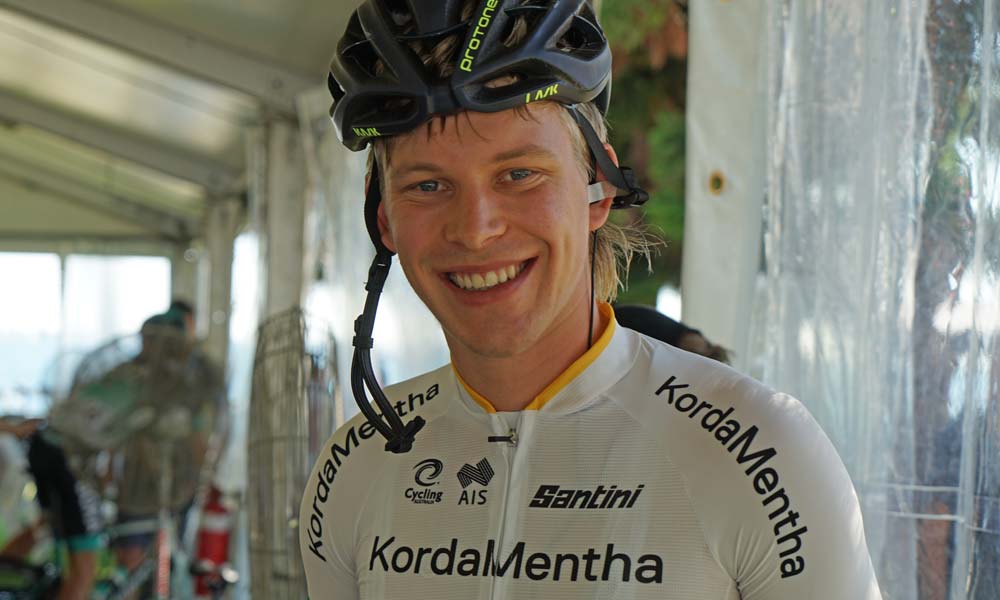 Alex Porter rode a 3:50 in qualifying at the world championships last year. That sentence alone suggest that he should be a superstar in the cycling world! He was just 20. What can we expect from him this year?

Before the start of the Cadel Evans Great Ocean Road Race on Sunday there was the usual pre-race shuffle. Into the marshalling area, onto the podium to sign on and be presented to the crowd, back to the shade of a giant tent to try and keep cool and gather some food and drink in preparation for what comes next. Just 30 minutes before the peloton lined up, Alex Porter was happy to chat.

Below is a transcript of my first exchange with a young rider who is on an up and up trajectory. The 21-year-old won’t be able to defend his world title – he’s not one of the four from the Australian team going to Apeldoorn at the end of February – but he hopes to be competing in green and gold at the Commonwealth Games.

He is another rider recruited to the cycling program thanks to SASI’s talent ID program. He wins on the track and has honed his form with a couple of WorldTour appearances on the road.

Moments after we spoke he went on the attack with a selection of other track specialists including world championship team-mates Sam Welford, team pursuit silver medallist from Rio Michael Hepburn, and dual Olympic omnium medallist Lasse Norman Hansen.

Alex Porter may be young but he has achieved a lot in a short span of time as a cyclist and we can expect to see a lot more of him in the years to come. 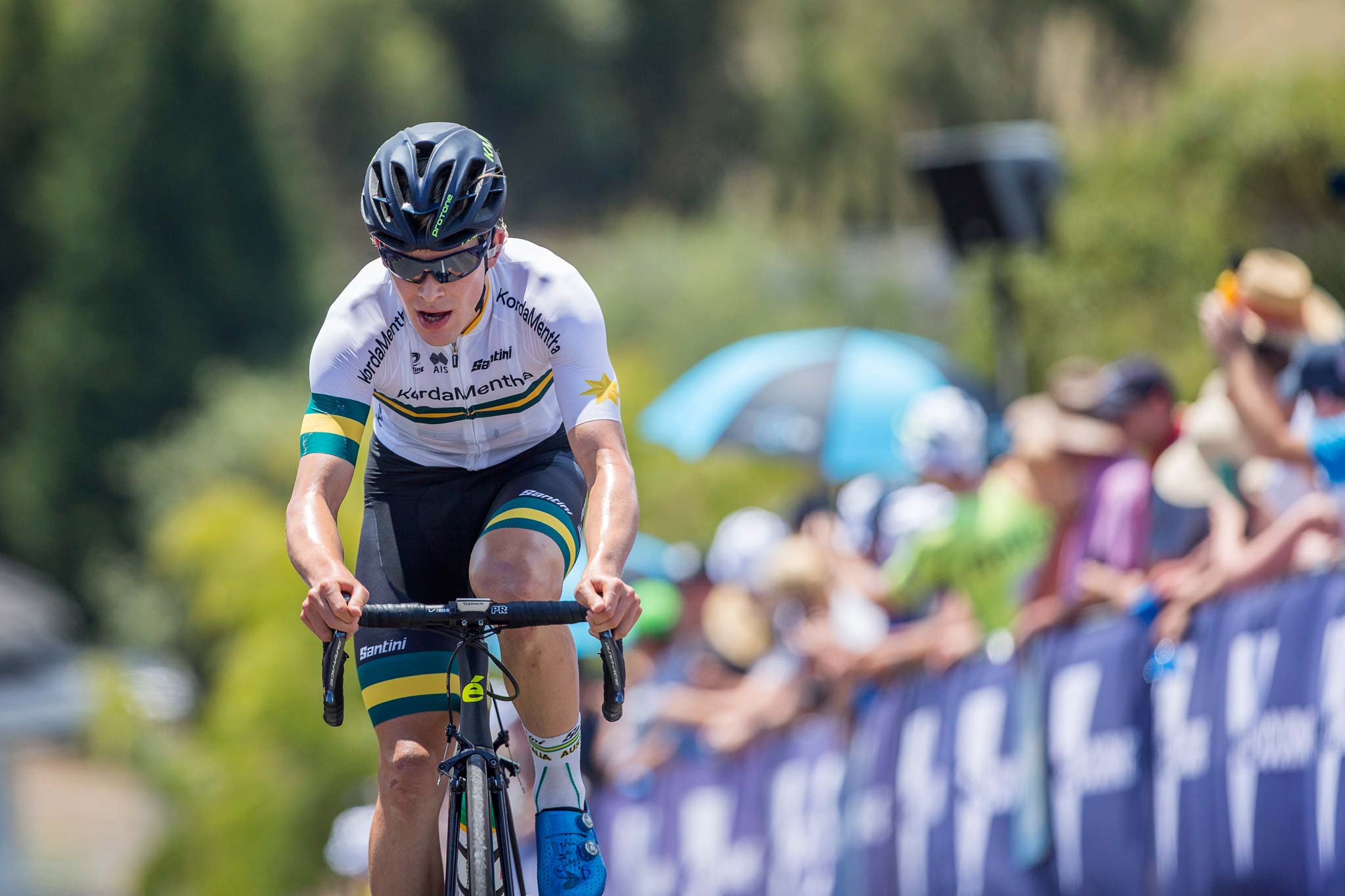 Porter was on the attack until the opening laps of the circuit in Geelong.

RIDE: I’m with one of the pursuiters who I’ve actually not spoken to in the past, Alex Porter. You’re a world champion and now you’re here on the road (at the Cadel Evans Great Ocean Road Race) doing your thing. It’s interesting times for you.

Alex Porter: “Yeah, definitely. I’ve had more of a road focus the last month which has been good fun with TDU last week and now Cadel’s today… I’ve been loving it.”

I think next Monday (5 February 2018) there’s some announcements coming up about a race on the Gold Coast/Brisbane in Queensland, the Commonwealth Games. Do you expect that you’ll be part of the [team pursuit] quartet this year?

I’ve been following pursuiting for probably a lot longer than you’ve been alive and I really think I have spoken to most Australian pursuit world champions in the past but this is our first meeting, our first encounter. Give us a little bit of background about how you came to the sport. You’re still only a pup, really, aren’t you?

“Yeah, I’m only 21. I started about seven years ago now. I was playing football just through school and the South Australian Sports Institute just came to my school and did some fitness testing when I was about 15.

It’s interesting isn’t it, SASI did the same with Rohan Dennis. They pulled him out of the pool and put him on a bike. What sort of football were you playing?

“Australian Rules football. I’d only ever ridden a mountain bike every now and then, down to the shops, [or] around to a mate’s house. I hadn’t even looked at a road bike before I first heard about this, so it was a bit of a whirlwind at the start and there were a few rough days just getting into it, but it’s worked out beautifully.” 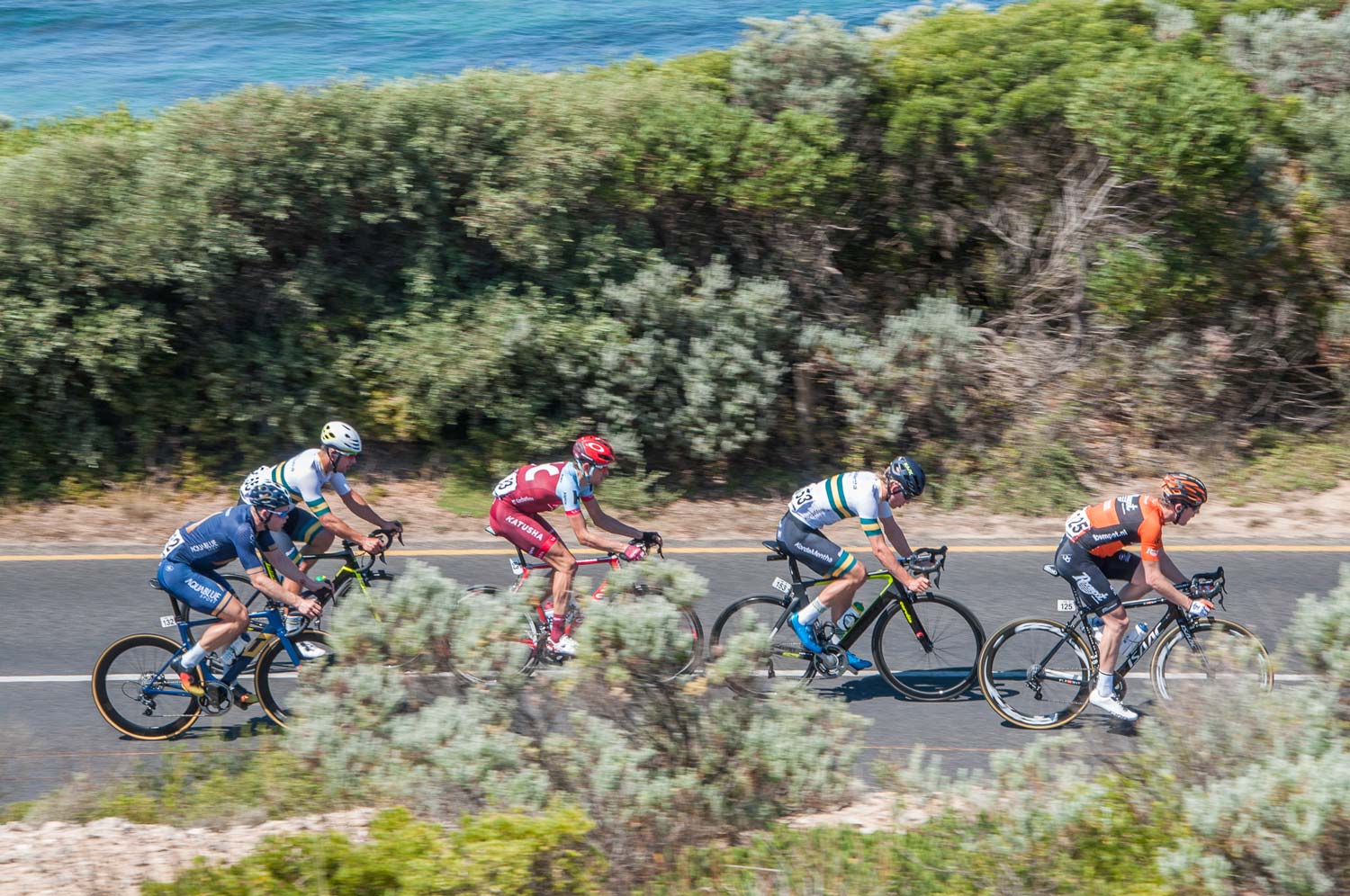 Breaking away… after a couple of WorldTour races, it’ll be back to the track for Porter in February.

And now you’re embedded in the thick of cycling culture. How was your WorldTour experience [at the TDU]?

“It’s awesome. Just the atmosphere, the crowd… obviously being in Australia has made it that much better. But being able to race at such a high level with such a quality field has been an awesome experience; just learning how these guys race, how different it is to a lot of the under-23 racing I’ve done.

“It’s just been an experience that I’ll never forget.”

Switching from road to track? Is it cumbersome? Or do you have a set agenda of when you go from freewheel to fixed gear?

“There are times when we’re on the track and the road… a lot of the guys on the team had a focus of doing road through January with road nationals and a few of the boys then went over to New Zealand.

“We’ve used this month as a good period to get a bit of base. And all the other guys are up in Brisbane at the moment getting ready for the track nationals; Sam [Welsford] and I will head up tonight [Sunday 28 January] to join them.”

When you get back on the track do you start feeling for a shifter…?

“Ah, yeah – at times, especially when you’re here on the road and you’re riding along at 90rpm and you get to the track and you’re at 120! You’re definitely looking for a shifter just to click down a few more gears.

“That’s definitely one of the things you’ve got to get used to. But we’ve been mixing the two for so long now that, after a few races, you’re back to that leg speed. Even out on the road I generally tend to right just a bit of a higher cadence than most of the other guys just from my track background.”

So, you’re protecting your legs. You’re off junior gears at last. How was that jump when you made that acceleration to what you’re now pushing – you’re pushing pretty hefty gears…

“Yeah, it was big! When we first came up to pushing the big gears we’re now using, it was tough. We were taking it small steps at a time but with a lot of gym work and just a lot of strength stuff out on the road.

“Over time, the progression to running bigger gears got easier and now we’re [using] gears that I didn’t even think I’d be riding only a few years ago.” 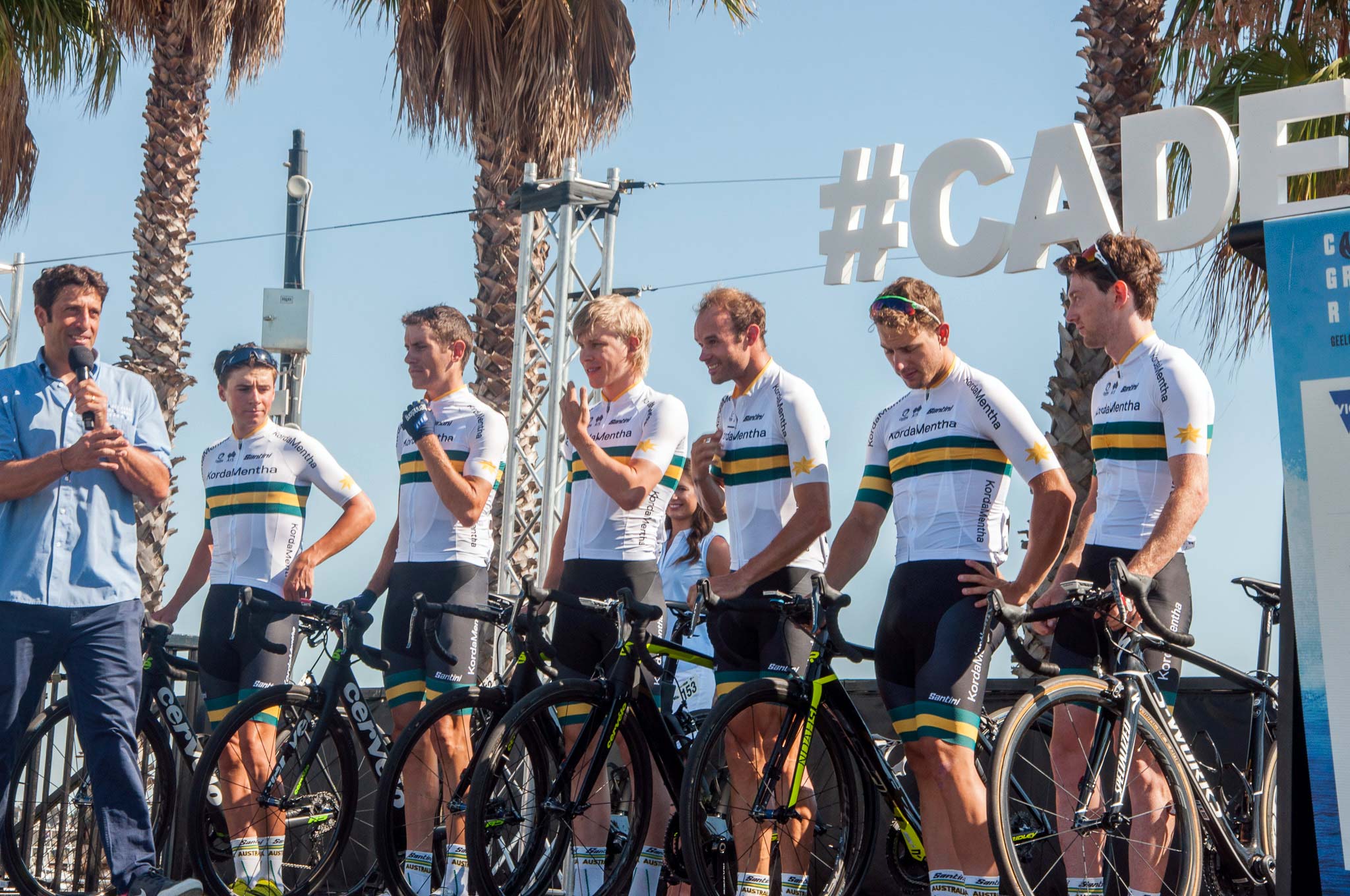 Porter, with the blonde hair in the centre of the picture (above) was part of the UniSA team for the Tour Down Under and the Korda Mentha team at the Cadel Evans Great Ocean Road Race.

While you’re talking about gym, just give me a little overview: are you pushing big weights? Are you doing high reps? What’s the structure? We hear about gym work for the trackies, we understand that it bulks you up a lot more than the roadies. Are you feeling that? Are you feeling like a solid rider now?

“Yeah, definitely. I’ve found the gym does bulk you up more than the road. But I’ve also felt, coming in a bit late, that I’ve been able to use the gym to get my strength a lot quicker. It’s definitely helped the progression. And, depending on the time in the season, we’re doing higher reps or heavy weights.

“At the moment we’ll be doing heavier stuff, just getting those last touches – that last little bit of strength up – for the Commonwealth Games.

“Even though it makes you that little bit heavier, it definitely helps with some base strength for the road.”

You’re best is a 3:50… that’s a number that just seems bizarre to be talking to a 21-year-old about. Is it going to go under 3:50 for the Comm Games? And will it be qualifying or finals?

“Brisbane is a fast track. So I think there’s a possibility it could. And I think, more than likely, in the final once you’ve got that little bit of extra boost when you’re racing for a medal with the other team on the track.

“I definitely think it’s possible for it to go under 3:50 at the Commonwealth Games.”