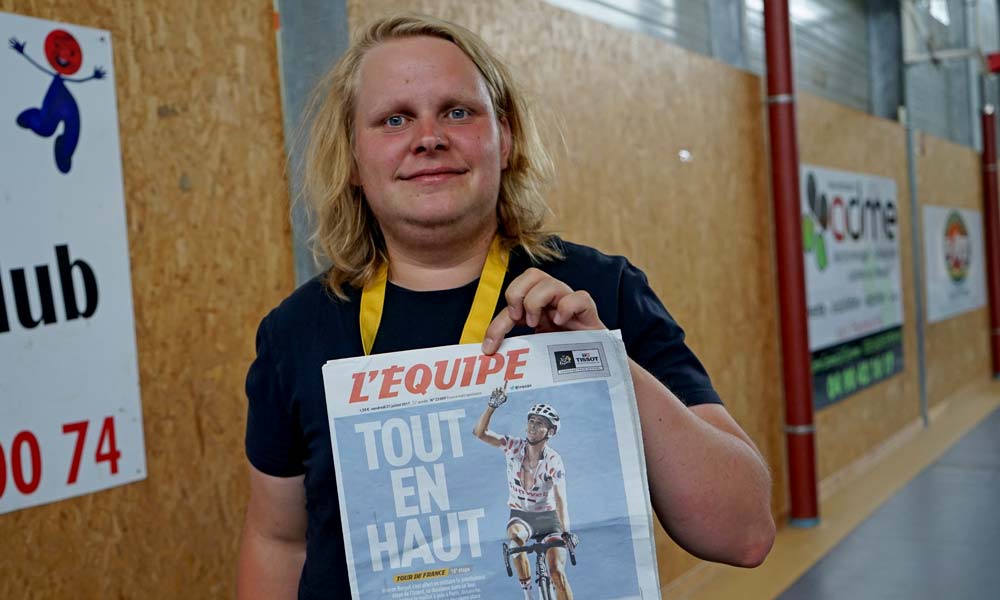 We step outside the media room for 10 minutes to get the lowdown on how L’Equipe covers cycling in the modern era. Here is an interview with Alexandre Roos about how the French sports daily covers the Tour de France…

The Tour de France was created by a publisher. It began in 1903 with the intention of creating an event that would generate interest and intrigue and thus prompt people to buy a newspaper. L’Auto has long gone but L’Equipe has been The Newspaper of the Tour for many years.

The French sporting daily has changed a lot over recent years and there is now a digital edition of the newspaper available for download at midnight every evening.

You can peruse a PDF of L’Equipe on your computer around the time that it hits the press to be printed and prepared for distribution the following day.

Media is constantly evolving and so too the way that cycling is covered. And so we took a moment during stage 19 to talk to L’Equipe’s cycling editor, Alexandre Roos, about his job, the change nature of media, reporting on cycling and how to meet market demand…

Alexandre Roos, 35, has been the head of cycling at L’Equipe for three years.

RIDE: I’m with Alexandre Roos who is the head of cycling at L’Equipe which, as anyone who knows cycling would understand is a French sporting newspaper. Cycling is a huge component of the newspaper. How many Tours have you done now in that role?

Alexandre Roos: “It’s my sixth Tour de France but only the third as the head of cycling. First I was a reporter and then I moved to leading the whole team.”

It provides quite a challenge because I would say L’Equipe probably provides the most comprehensive coverage of the event by virtue of its nationality. What are you looking for each day? Are you trying to make sure you cover the absolute fundamental story or are you looking for intrigue or scandal or a scoop? What’s your main priority?

“The main priority remains to explain the race… if someone hasn’t seen the stage the day before, when he reads L’Equipe in the morning, he knows everything that happened. That’s the basis but then, of course, we’re very interested in, as you say, intrigue – stories like Sky’s skinsuits at the beginning of the Tour.

“We also try to have insight, inside information, from within the teams about riders changing teams, about what’s going on within the teams, and so we try to do everything like that.”

How many staff have you got on Tour with you?

“We have nine reporters writing pieces and then there are three photographers plus, of course, our [drivers] and so I would say it’s around 20 people.”

And you’re a writer as well as an editor – what position would you prefer to label yourself?

“I like both because I’m an editor so I decide every evening what we’re doing in the newspaper so usually we have between, I would say, 10 and 14/15 pages every day on the Tour.

“That’s the first part of my job after the stage: I speak with the reporters and see what we’re doing, how we’ll organise things. And then I start to write the general review of the day that really tells the story of what happens during the stage. That’s the two components of my job.” 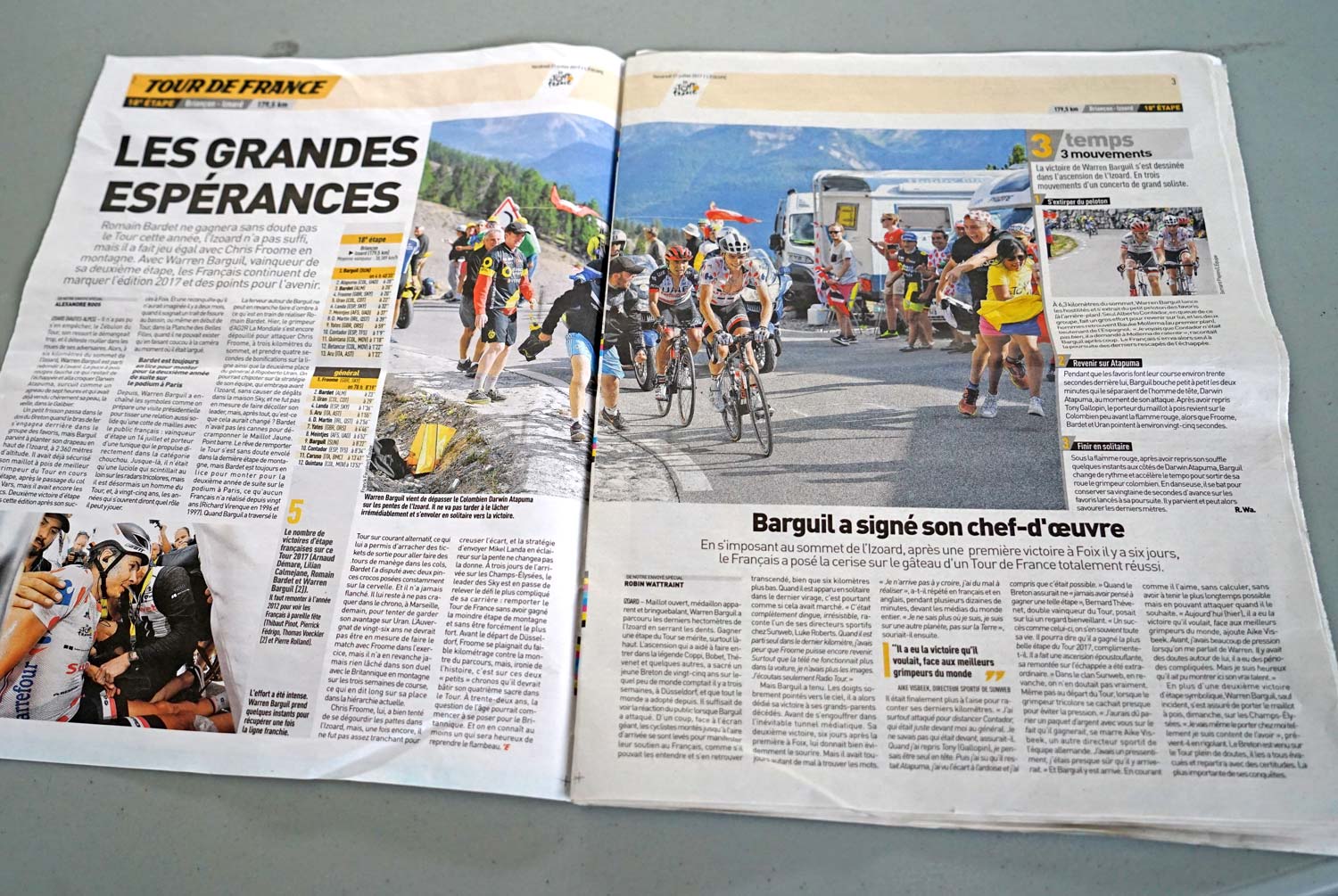 The 21 July 2017 edition of L’Equipe featured cycling on the cover as well as 15 pages of coverage inside the newspaper. This is on par with the daily average during the Tour de France.

L’Equipe sets the standard for coverage of the Tour de France in particular. You’ve come into the role with new media absolutely flourishing. How have you found the infiltration of new media into the newspaper market?

“It changed, quite a lot, our way of doing things because 20 years ago we could wait until the next morning to publish some information. Now we can’t wait anymore.

“Also, what I find disturbing during the Tour, is not so much the infiltration of online media but more the ‘general public media’ infiltrating into the Tour and writing stories which wouldn’t make sense to cycling journalists the rest of the year.

“These media they speak a lot about it and then, in a way, we are obliged to speak about it also – and then also try to re-establish the truth of certain things.

“Sometimes you have polemics about nothing but then you just have to explain to the readers, ‘Okay, that’s bullshit… we’re going to tell you how things are going on in cycling usually.’

A good example is people referencing climb times and how one year can compare to the next. But they’re not referencing the weather, the fact that the timing might be in a different location… all sorts of things. And therefore they’re drawing incorrect conclusions…

“Yeah. That’s just one example. I would say the same for the watts figure. I’m not sure there’s one cycling journalist that can interpret these figures correctly. Even scientists don’t agree.

“That’s the usual stories on the Tour and you have to try to catch up with them and that’s quite… ah, boring sometimes.” 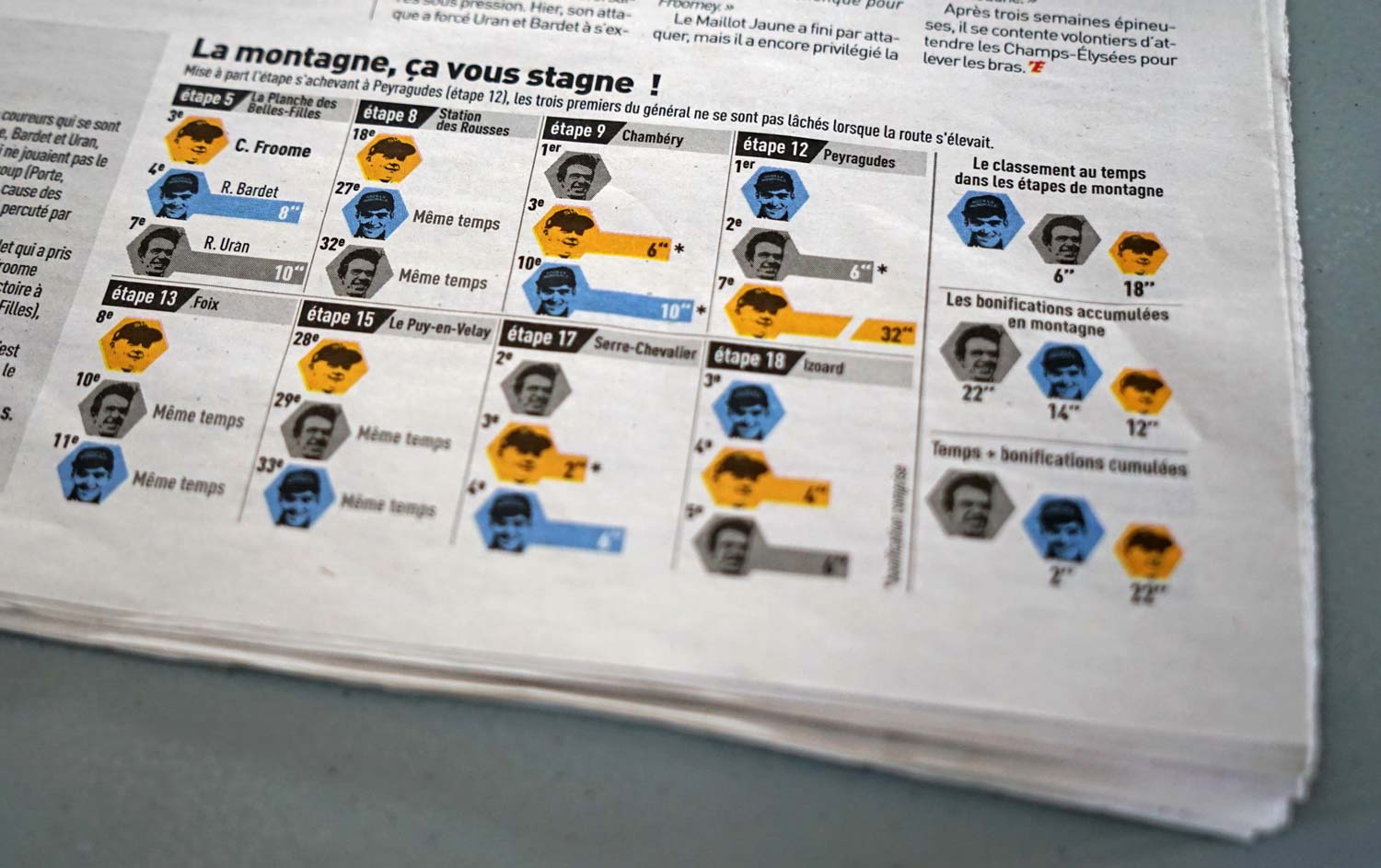 Each day there’s a wealth of information about the Tour in L’Equipe that is compiled by a team of nine reporters and three photographers.

A veteran journalist of the Tour de France once told me that ‘A reader reads’ – and therefore it’s the editor and the journalist’s job to determine the story rather than respond to the public.

“Yes exactly, I agree but sometimes you have editors that ask you to respond… ‘Oh, I saw this on TV’ or ‘I read that in a newspaper’, and they still want the story.

“But I agree, we should decide what’s worth writing and not just react to what everybody is saying.”

“I would say there have been boring stages, for sure. But I would say the Tour is a balance and you have crazy stages thanks to the more boring ones.

“You can’t have 21 stages that are crazy.

“I really liked the fact that the fight was so close between the main contenders and I think we have to get used to it because we saw it during the Giro too, the gaps in the mountains are very, very tiny now. We can’t wait for crazy attacks [something like] eight kilometres from the summit. We won’t have that anymore, I don’t think.

“We just have to get used to it.

“I think the battle was quite exciting…” 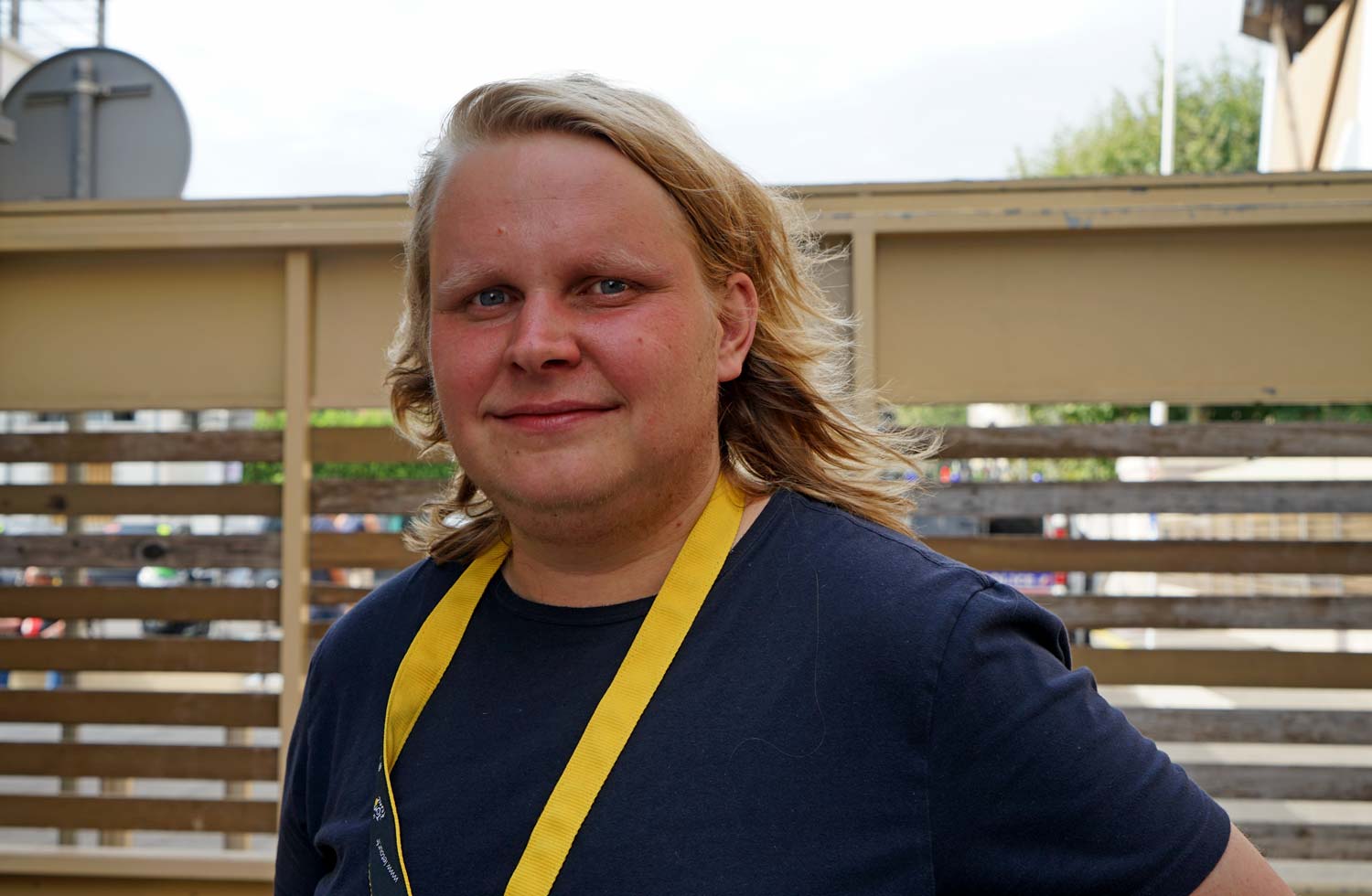 In this era of ‘marginal gains’ – and everyone is hip to that groove now, everyone understands that you have to look at every detail to become the true GC rider – I guess there’s a handful of guys who are, for want of a better word, generic. And by that I mean: if we consider the cycling market, many of the bikes that are being developed have platforms of aerodynamics and comfort and other things but they are all turning into one and the same… it’s the same for a GC rider isn’t it?

“Yeah. I agree. That’s the same for what we were saying about watts and the climbing times… it’s a little bit the same about the bikes they’re using.

“We don’t know [the truth] because of course Pinarello for Sky is going to say: ‘We have the best bike!’ The same for AG2R for Factor…

“And I would say it’s really an area where marketing and tech, they melt together and to write a story about it is quite difficult to know what’s the truth and what’s marketing and bullshit.”

I guess that leads us to a concluding question: is the best rider the one who wins or the one who engages the audience the most – and it’s a multi-tiered question… can you select your favourite rider and explain why?

“Okay… the best rider is the one who wins.

“He will probably win on Sunday and, if he does, I think he will have managed to win the Tour in a very different way than his previous three wins. And I think that’s really the mark of intelligence and tactical mastery. So I would say Chris Froome is definitely the best rider of the Tour.”

And he has charisma and intelligence and considerable appeal…?

“[He’s] the best rider but off the bike, not so entertaining… so I think it’s something he has to work on, his character – a little bit – off the bike and be a little bit more relaxed. And stop thanking his team-mates every night.”