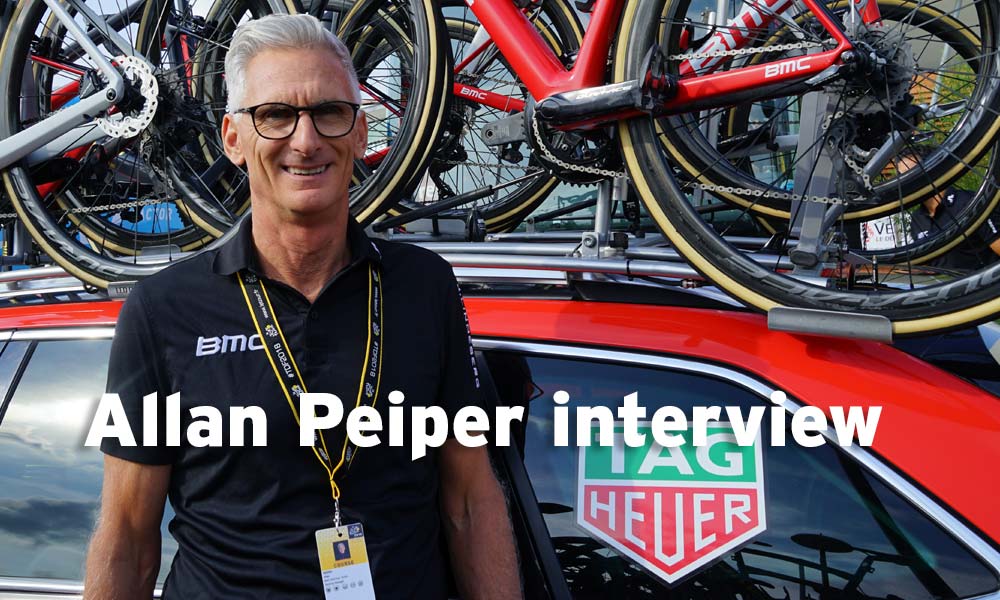 Allan Peiper: “the culmination of my career”

Richie Porte will be the focal point of many Australians watching the Tour in 2018 but, behind the scenes, there’s a key ally in the form of compatriot and high performance manager of the BMC Racing Team, Allan Peiper.

There are few people as professional and as passionate about cycle sport as Allan Peiper. He has been involved in the competitive scene for much of his life and, at the age of 58, he believes he is embarking on one of the most exciting three weeks of his career.

He explained his history with cycling during our interview two days prior to the start of the 2018 Tour de France. “I started off racing when I was a kid in Australia as a 12-year-old in Yea, came to Europe when I was 17, turned pro when I was 23, retired when I was 32,” he said.

“I came back in as a sports director in my 40s and moved up the ranks through different roles, from technical director to performance manager to sporting manager. And I think probably the time I’ve done in cycling has all led to this moment.”

Like many he believes Richie Porte is capable of becoming the second Australian Tour de France winner. There’s a long road to Paris and three weeks before we find out if this quest will conclude the way Peiper and his team hope it will.

The spokesman for tactics is Peiper’s Italian colleague, Fabio Baldato, but this interview offers an outline of how BMC Racing is managing the task of trying to direct Porte to victory in the 105th Tour.

– For the interview click the SoundCloud file and/or read the transcript below. –

Listen to our interview with Allan Peiper, click the SoundCloud file above.

RIDE: Everyone in Australia is aware of Richie Porte and his big challenge for the yellow jersey this year and I’m talking with one of the key advisors, Allan Peiper… it’s: come the moment, come the man – or something like that, isn’t it? Is that’s what’s going to happen these next three weeks?

Allan Peiper: “Well, I think there’s a lot of things aligning this year and Richie has had a little bit of bad luck the last couple of Tours. Hopefully this one will present itself in a better way.

“Richie is in great shape, which was part of the plan for him to come later in form.

“Winning the Tour of Switzerland wasn’t a priority but he did win, so mentally and physically he’s in a really great place and his team is around him.

“I think of the past years Tours, this year is probably a [course] that really suits Richie and his strengths with some short stages that are really hard and a hard final time trial – that really plays to his strengths.”

We spoke a few years ago and talked about your ability to drop a few names in cycling. You’ve worked with some of the greats in the sport over the years. As a rider you were alongside Phil Anderson for a few seasons, and then as a DS you’ve had the responsibility of looking after talented riders with a lot of expectation, like Mark Cavendish and we could list a whole host of others… how does Richie compare with the other people you’ve worked with and what do you think will happen should he take the yellow jersey at the Tour de France for the first time?

“Richie is less complicated than most big stars. He still has his sharp edges at times – as we all do – but he’s an easy one to work with and of all the riders within the team, he’s one that makes contact by himself. He doesn’t need to be contacted – he contacts me instead of me contacting him. And that’s really a great way to work with somebody because the you know that they’re open to that contact.

“About the yellow jersey, I think that if Richie got to take the yellow jersey later in the race, it would only give him more confidence and more belief in what he’s doing so I see that as a good thing.

“Strategically, it depends on if he gets it and when he gets it, but they’re big questions and [the answers] are a long way [away].” 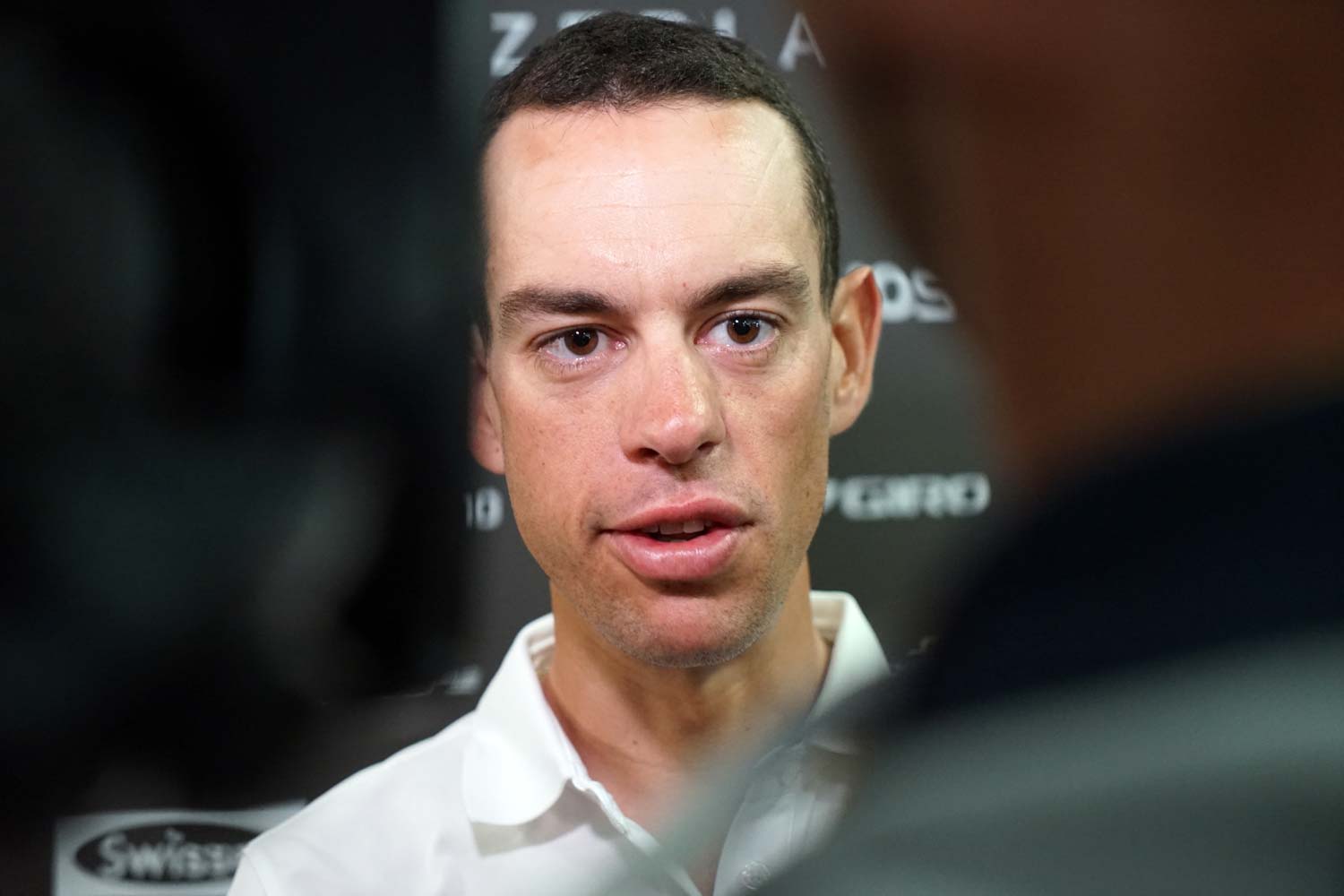 Richie Porte at the pre-race press conference (above).

[The media] has been asked to talk about tactics and strategy with Fabio Baldato who is going to be doing most of the talking on behalf of the team… so could you, for the sake of an Australian audience, explain what your responsibilities are on this race? You’ve been in and out of the Tour for the last few years – not doing the complete three weeks – but this year you’re calling the shots? How do you fit into the sequence?

“Well, it’s more… it was a request of Richie’s already for a couple of years already that I’d be at the Tour de France and a request of his that I’ll be on the radio and that is a language thing as well.

“Fabio is a great director as is Valerio Piva but my Australian [heritage] and English is probably quite bit clearer, so I’ll be in the first [team] car with Fabio, [he is] the first director, he’s driving the car, he makes final tactical decisions, but I will be speaking in the radio to the team for that language part as well and also for the familiarity part.

“Fabio and I worked together in [the Tour de] Romandie and we put this plan in place already last [European] winter and we used it effectively in the Tour de Suisse, where I was speaking in the radio and he was driving the car – so we were bouncing off each other a lot and using other external forms of information to help us.

“I think, going into the Tour, we’ve got a good system and I’m really looking forward to it.” 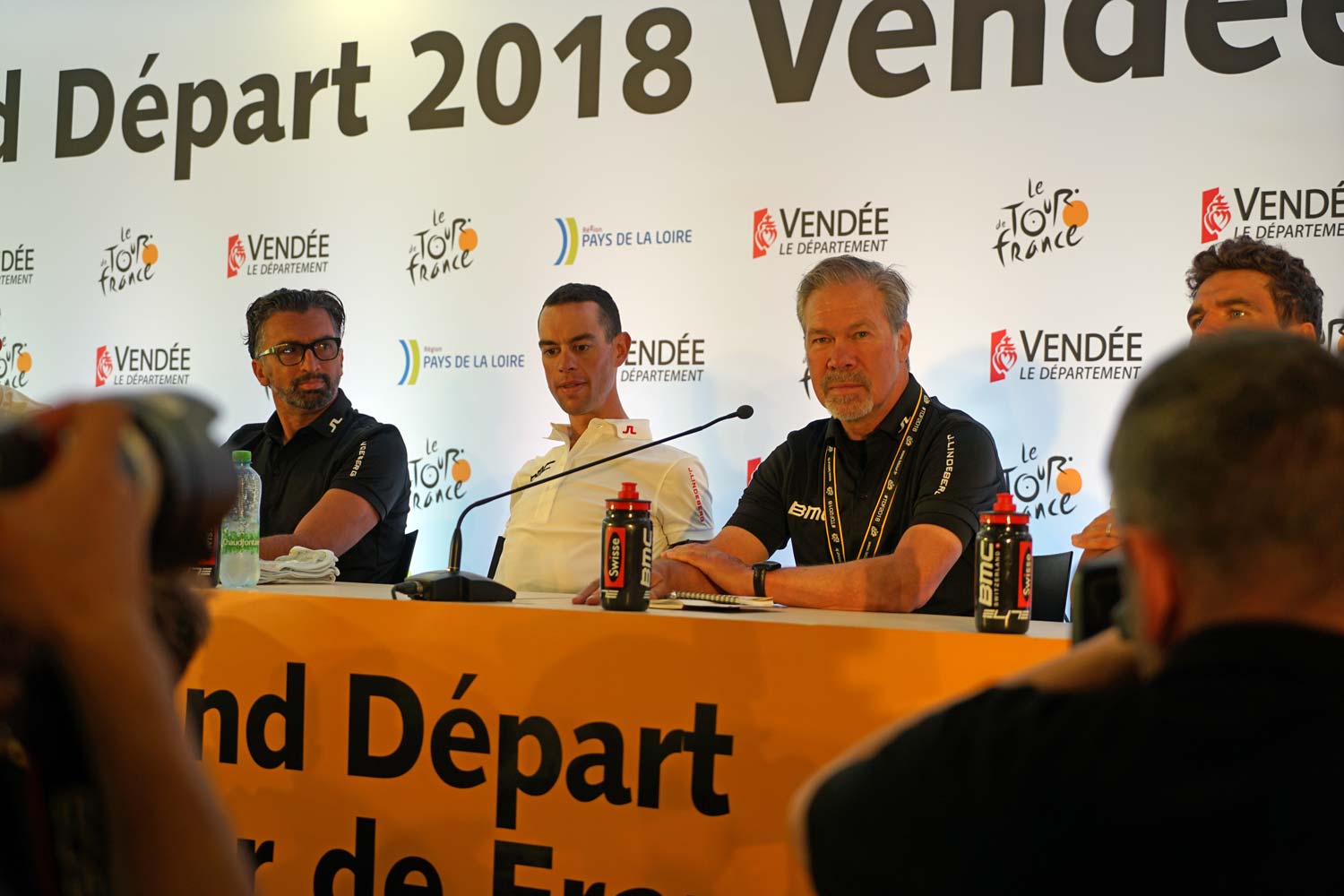 Jim Ochowicz, who is the principal of BMC Racing, was the first director to introduce two-way radios to the Tour de France. For years there was a bit of contention: if it should be that two-way radio communication with the riders should be banned, in fact. Just talk through your messaging that you give to the riders. Can you explain what sort of discussions you’re having and is the signal really clear enough for them to hear all of the time?

“Well, there’s been a lot of development in radios since the 1990s when they started off with heavier analogue radios, then lighter analogue radios – then we move into digital radios, switching over to analogue for some specific races. Time trial radios are smaller but generally speaking, the communication is important.

“I think it is really critical and these days, with so much more road furniture and so much more complicated road situations – with higher speeds and more stress – I think it’s only normal that we have radio communication.

“The biggest part of radio communication is being able to give the riders step-by-step guidance on the way the course goes, whether it be lefts or rights or ups and downs, or wind speed for open sections of the course… those are really critical [bits of information].

“Coming down to the nitty gritty of tactics, that’s usually in the final. And of course that’s critical but riders are riders and they know how to race as well.

“Sometimes the rider is one person and behind the scenes – [with] three directors in two different cars – calls with the performance team gives it a different perspective on the 20 other teams and what they’re doing, so that can be really important moments to give that tactical advice.

Again, I’m talking to you because I want to find out more about Allan Peiper, the story [and not only about the Tour, the team and the tactics]. I look at you now, many years after your retirement from racing, and you look super healthy. I know your love of the bike, I know you’re still riding when you can – it certainly looks like you are. Explain to me your love of cycling. Can you paraphrase that in a couple of minutes or not?

“Yeah, I think I can make it pretty easily actually: I started off racing when I was a kid in Australia as a 12-year-old in Yea, came to Europe when I was 17, turned pro when I was 23, retired when I was 32. I had a few years floating around.

“I came back in as a sports director in my 40s and moved up the ranks through different roles, from technical director to performance manager to sporting manager. And I think probably the time I’ve done in cycling has all led to this moment in my career – you know, going into the Tour de France, having a prolific role with an Australian who can do a great race, I think that’s the culmination of my career.” 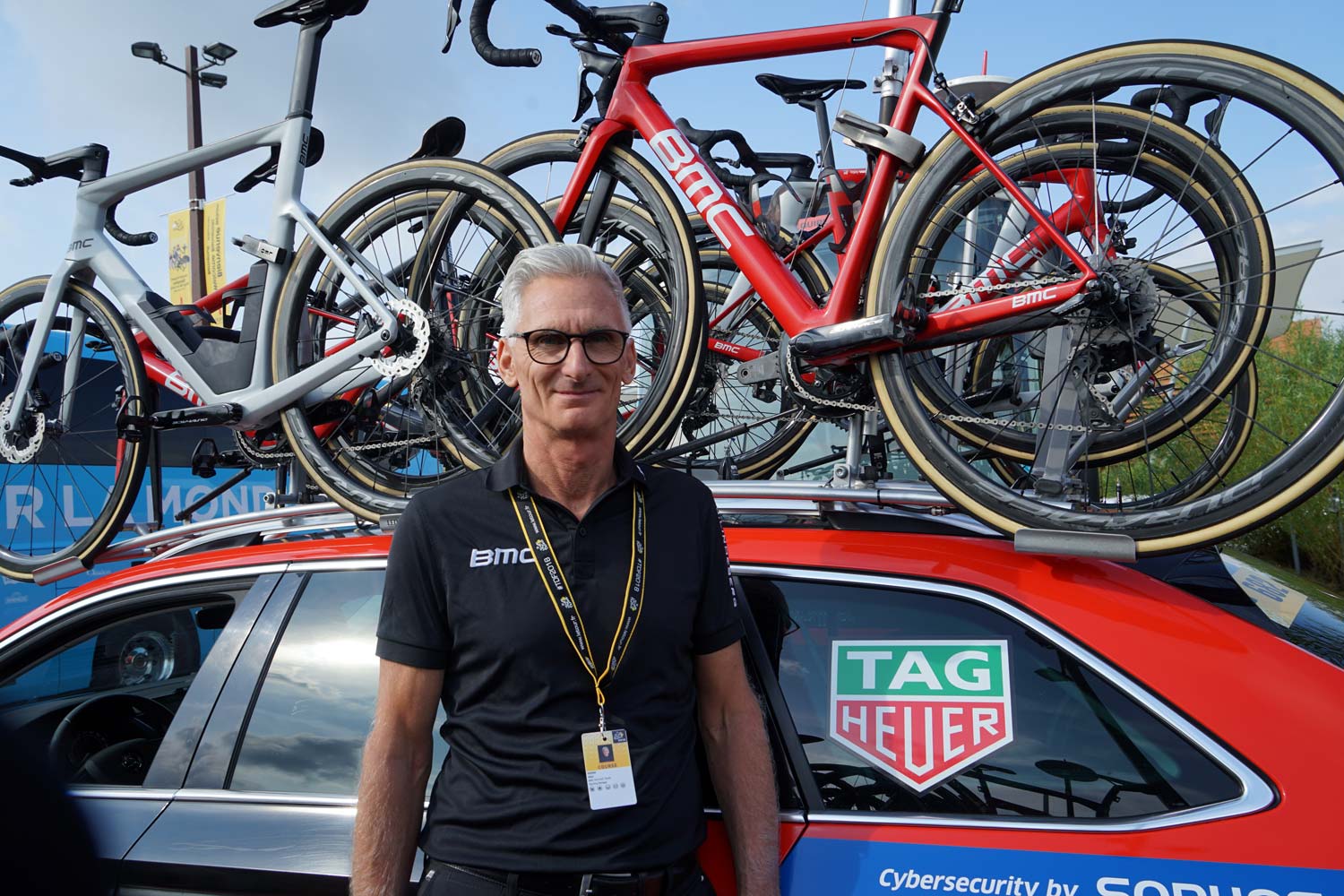