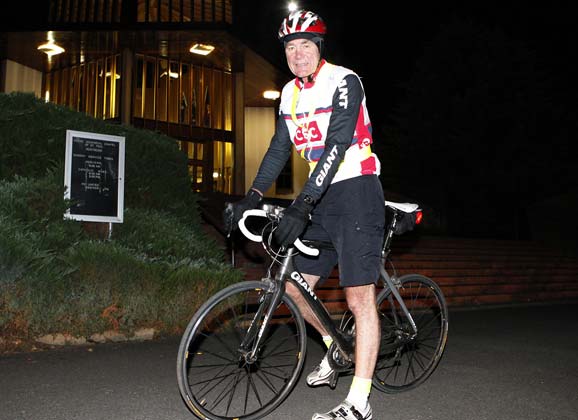 Angus Houston: Shall we ride, Sir?

Back in September 2011, RIDE published a feature on the former chief of the Australian Defence Force, Angus Houston. Why? Because he rides. Cycling is part of a regular routine for the man who received a knighthood yesterday. Anointed the honour by the Australian prime minister, it’s a title that reminds us of his status in our society and thus we thought it a good idea to publish the story about why Houston rides online. (See below.) As for the other bloke who got the nod to be called “Sir”… we’re fairly confident he’d refrain from getting out of bed at “4.30am in the middle of winter” to go for a ride.

Anyway, ours is not a political magazine… rather an archive of stories about cycling, riding and the good things in life. Here’s the yarn by Tom Stewart-Moore as published in RIDE #53. 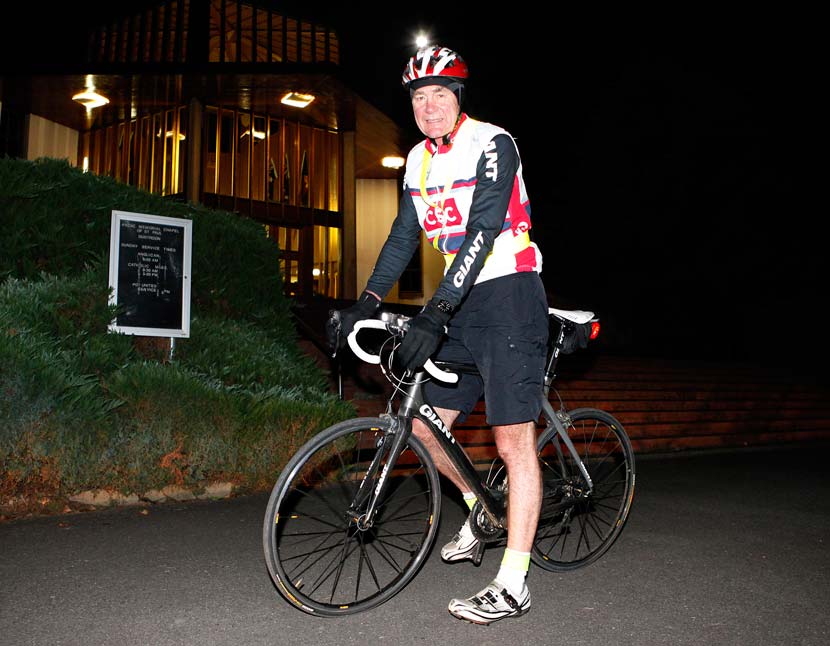 Angus Houston gets ready to ride… at 4.30am on a cool Canberra morning.
Photo: Tom Stewart-Moore

Everyone who rides a bike has their reasons. For the recently retired chief of the Australian Defence Force, it’s about finding some personal time, to “relax and clear the mind”. Angus Houston relishes his cycling… even if the only time to do so is very early in the day.

As summer recedes and the warm mornings fade to a distant memory, there are plenty of cyclists in Canberra who find the option of staying warm in bed – rather than emerging for a hit of exercise – to be a pretty good one. It’s a common phenomenon in the colder climes; bunches all over the country’s south start to thin out and the text message excuse line gets a workout.

If you happened to be taking in the morning air at 4.30am around Lake Burley Griffin though, you’d likely come across the 196cm frame of Angus Houston cutting through the dark. Better known as the former chief of the defence force, Allan Grant “Angus” Houston retired in June after six years in the top job. His insanely busy days clearly started early and often didn’t finish until late evening. A superhuman effort no doubt, and at 63 Australia’s former top soldier is clearly disciplined and dedicated. He’s on the bike three or four times a week, year round. “Even in the middle of winter when it’s minus three. It’s not a problem if you’ve got the right gear,” says Houston. “And I’ve got the right gear.”

Having grown up in Scotland, he’s pragmatic about the climate. A well-used Scottish saying suggests to the softies among us: ‘There’s no such thing as bad weather, just the wrong clothes.’ Houston agrees, “But I’ve been in Australia for 43 years and I regard myself as an Aussie, an Aussie with a Scot’s origin but I’d say I have an Australian attitude to weather!”

Not many get up to ride at 4.30am in the middle of winter so perhaps he’s retained more of the Scots’ hardiness than he will admit. Despite emigrating when he was 20, there’s no trace of an accent and it’s hard to imagine that his early life riding around the same county that bore Robert the Bruce didn’t shape his current approach. “I used to cycle a lot when I was a kid and go on long rides on a weekend… wherever the mood took me, so I’ve always been cycling. I didn’t join any clubs, it was just something I really enjoyed doing. I guess through my childhood, that’s where I got the love for the bicycle.”

His appreciation for cycling is something that got Houston through the day. When you’re commanding 60,000 troops, 1,550 of whom are stationed in one of the world’s most dangerous countries, Afghanistan, one needs some time alone to clear the mind and, at that time of the day, he certainly got that. “I never see anybody else out there! The only thing I ever see are kangaroos and rabbits, I guess that’s the hazard of riding at that time. I’ve got a good set of lights.”

He certainly needs to see clearly. With the weight of responsibility that comes with sending people into danger and recent scandals like those at the Australian Defence Force Academy, it’s little wonder that Houston spent time on the bike to reflect with only the early morning wildlife to keep him company. It seems to be a masochistic exercise at first but when you realise it’s probably his only time alone during the day it begins to make perfect sense. “The best thing for me to relax and clear the mind and go out and enjoy the outdoors is to be out on the bike and go for a long ride,” he says.

Houston joined the RAAF as a cadet in 1970 and cut his teeth on Iroquois helicopters. An instructor on a variety of aircraft, he later oversaw the introduction of the Black Hawk helicopter into the defence force and has accrued many honours including becoming a Companion of the Order of Australia.

It’s hard to find a bad word said about Houston. He’s well regarded across the political spectrum too, having endured a 2002 Senate inquiry where he famously challenged the Howard government’s 2001 election campaign claim that children had been thrown overboard from the asylum-seeker boat SIEV 4. Political suicide for a man who at the time was the Chief of Air Force and acting Chief of Defence Force you would imagine, but not for Houston. Three years later he had not only survived but prospered. He was promoted to the top spot, taking over from Peter Cosgrove, and was there until June just passed.

So what does retirement hold? Rumours about Houston becoming governor-general are politely but firmly brushed away. “I’m a great admirer of the current governor-general, I think she’s doing a great job and I know she’s going to be there for some time to come.” He plans for more time in the saddle, if a little later than he manages now. “I anticipate doing more long rides that I’d normally do on a weekend, from time to time I get up around 100km and I think I’ll be doing more of those.”

Another prominent Canberra heavyweight, Tony Abbott, recently appeared in this column. As his early-morning exploits are well known, do the two ever ride together? “On the bike the last thing I want to talk about is policy or have a political discussion!” Houston says emphatically. “I think that’s the beauty of it all. It’s just such a wonderful way to start the day,” he continued before listing his usual exercise agenda. “I get on the bike and I usually do the 24km in about 46 minutes or thereabouts and I average about 30km/h – sometimes a little more or a little less. After that I feel fantastic. I don’t think I’d really be wanting to talk about the rest of the day.”

At his height, you would imagine that finding a bike that fits is a task fraught with copious back pain. Surprisingly, Houston buys off-the-rack and sits comfortably on a Giant Defy Advanced. His frame is the biggest size that brand sells and at 58.5cm (with compact geometry) it’s certainly a large frame by any standard. “It’s a nice bike and it does me. I am tall and I need the biggest bike that I can find and that’s mine and it works well. I’ve always just gone for the biggest frame that I can buy and I always buy bikes off the rack. I’ve never had specially built bikes, but it feels comfortable and I’m okay on it.”

The cycling industry as a whole seems to favour smaller riders and people at the larger end of the scale tend to find themselves compromised in terms of their position or forced to spend perhaps more than they’d like on a purpose-built machine. So it’s refreshing to find a major manufacturer supporting riders of Houston’s stature.

The other, more embarrassing, cycling exploit Houston is known for is falling off. We’ve all done it. The classic new-cleats-at-the-lights maybe? Gravel patch mid-corner? Not Houston. Here he took a slight turn from the usual in that he didn’t fall off as much as fall over, fracturing his wrist in the process. If you’ve ever taken a flight of carpeted stairs in cycling shoes you’ll know where this is going. “It was on the weekend in the middle of winter and I wanted to race out and get the last of the daylight,” Houston explains. “Rather foolishly I put the cleats on upstairs and I came down the stairs and of course there’s no grip at the back with the very slick Shimano shoes and I slipped and I fell on the stairs and the way I fell I ended up landing on my arm and wrist and so the full weight of my body hit the wrist. That’s how the fracture occurred. I wasn’t actually on the bicycle!”

The 2009 incident prompted an unkind article from the Sunday Telegraph which, in typical tabloid style, used it as an opportunity to bash cyclists in general; more specifically middle-aged men in lycra. It’s something cyclists encounter on a regular basis. Houston takes it in his stride and isn’t out there defending the cycling community against attacks like this but his influence is strong nonetheless.

“I just love doing it… by the same token I’m not an active advocate but I speak to a lot of people and tell them that cycling is a wonderful way to maintain your fitness, have some relaxation and exercise… and I notice there’s a couple of people around me who are riding now and who weren’t doing so before. I guess that might mean that I’m a good advocate with those around me.” I guess it does. 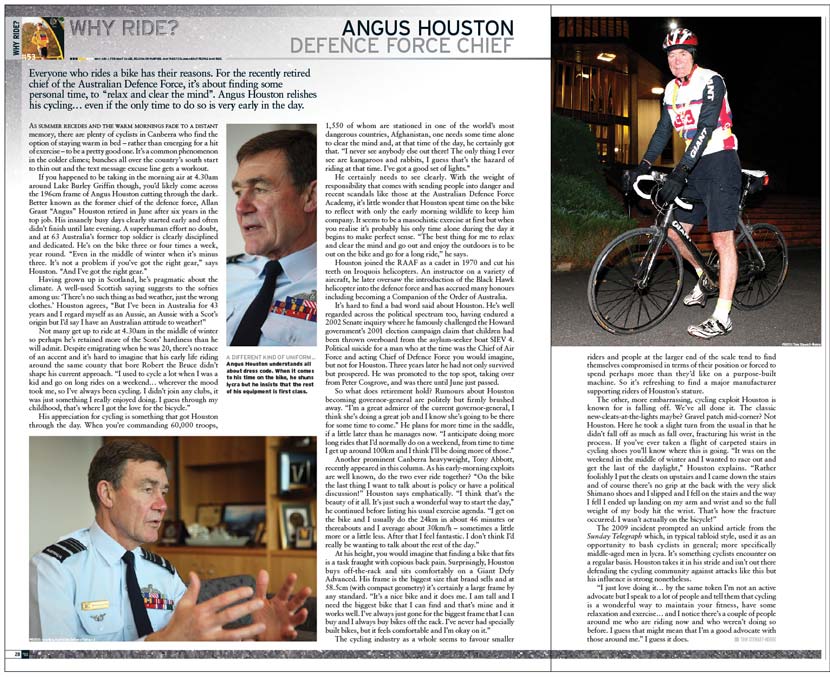