Bikes from the Beechworth bunch: Peter 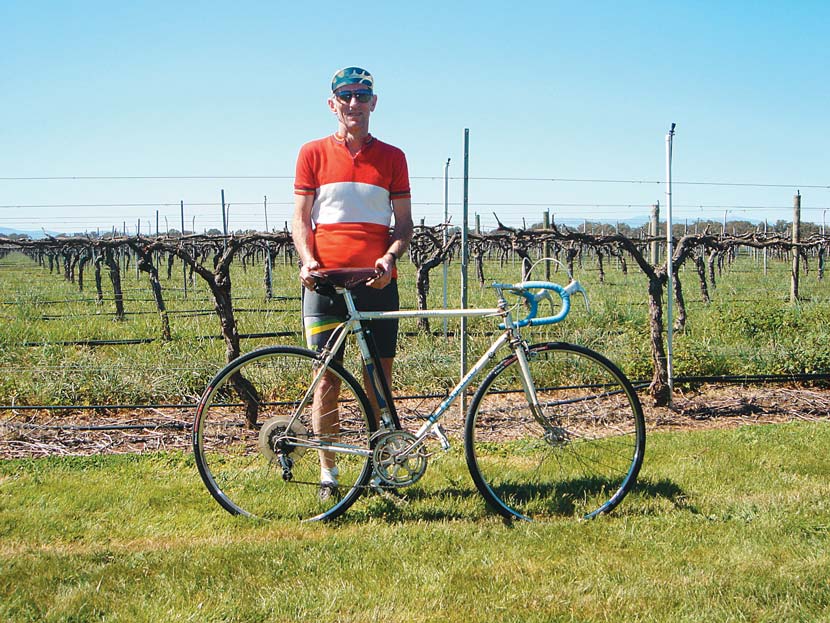 The bike: “It was made in Poland – the frame, forks and side-pull brakes are all stamped ZZR, which appears to be the brand of the bike. It has Campagnolo Gran Sport derailleurs which are from around the 1960s. I think the bike was probably first built around that era as well. I haven’t tried too hard to find out any exact information about the bike.

“Somebody came into my shop with this bike and that’s how I came to own it. A guy found it dumped and gave it to the police but they gave it back; he only wanted something to ride around the streets so I bought it from him a year ago.

“I tend to ride older bikes. This has two alloy chainrings – 50 and 46, a very close ratio – on steel cranks. It’s a lovely bike to ride. The position is great. We did some steep descents and it handled them beautifully.

“It appears to have the Olympic rings on the seat tube and it’s been suggested to me that perhaps someone brought it out from Poland for the 1956 Melbourne Games.

“The lugs are chromed, but it’s rusting through. I put on new tyres and changed the saddle to a Brooks one. The only other alteration was to put some cloth bar tape on. I haven’t even greased the hubs or bottom bracket…”

The groupset: “This bike has Campagnolo Gran Sport gear levers and derailleurs but the cranks are also stamped ZZR and have a very unusual spider on them.”

Kilometre count: “I don’t have average weeks because I sometimes go away for a year of touring. In 1995, I did about 20,000km including the Paris-Brest race but most of it was loaded touring. When I’m home, I’ll get out once a week and I also ride to work. I might average about 5,000km a year, but it’s not part of a regular routine.

“I think I’ll do the Alpine Classic (a 200km Audax ride) on this bike next year.  I hardly ever ride with a group; normally I’ll go with my partner and our pace is usually very slow.”

Good points: “The comfort and the handling are terrific. I think the credit for this can partly go to the fork rake and the fact that they are steel and have a bit of give in them. I only had cloth tape and old gloves and I was surprised how little pain I had in my hands after the rough ride of L’Eroica.”

Bad points: “It doesn’t have low enough gears for me. That’s the one thing I think I’ll do something about. I might see if I can put a smaller inner chainring on it.”

Miscellaneous: “I heard about Paris-Brest in the 1980s and thought it sounded like a challenging thing to do. You have to actually qualify for it — you must do a series of rides up to 600km before you can enter — but I’ve done it a few times now and will be going back again next year.

“It’s a 1,200km event that is held every four years. At one stage it was every 10 years but it has stopped being a race and is now a randonée. Oppy won it in 1931 and his time was around 45 hours; he beat three Frenchman in a sprint on the velodrome where the finish was contested.

“Your time is from when you start in Paris until you reach Brest. The only stipulation is that you have to finish within 90 hours. I usually sleep between six and 10 hours in total. I’m a slow cyclist so I don’t stop as often as other Paris-Brest riders do. There were 4,000 entrants last time I participated and there were about 80 Australians.”