In part two of our interview with Jack Bobridge before his attempt on the hour record, Rob Arnold asks about his arthritis, booze, family, Armstrong, Wiggins… and the changes he’s made in his life in recent years.

(In the first instalment, ‘Jacky Bobby’ talks about his bikes for the hour, the work-outs at the Tour Down Under and what wattage he’ll need to put out to break the hour record.) 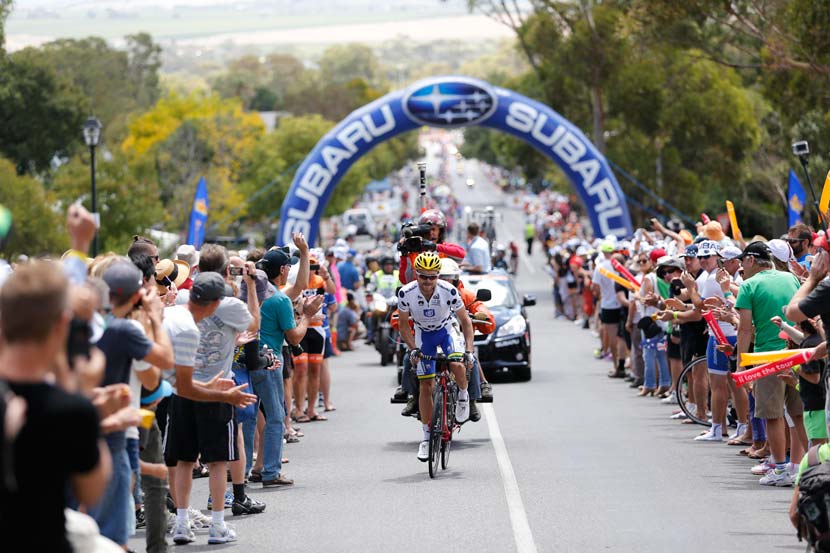 Bobridge on the attack during stage five of the Tour Down Under, one week before his attempt on the hour record.
Photo: Yuzuru Sunada

– Click the Soundcloud file to listen to the exchange and/or read the transcript of the interview below. –

RIDE Media: We talked a little bit in Adelaide about what you’ve done to alleviate the arthritis problem. You had a real problem with rheumatoid arthritis and you had a medication that you ceased [using]. Can you summarise that for me Jack?

Jack Bobridge: “Yeah, obviously I had the arthritis but I was using a medication called ‘Methotrexate’ which didn’t sit well with me for a year, a year-and-a-half.

RIDE Media: And that came because you consulted a general physician and he offered it as a solution to the pain… and where was the pain?

Jack Bobridge: “It’s obviously something that they use in everyday arthritis patients but if you look at it in terms of some one who was to work in an office, behind a desk, it’s probably something that works quite well.

“Being an elite sports person at the level that we have to compete at, I’ve found that I struggled with it and had a real fatigued feeling, and was not able to perform at my best. By dropping that, every week since then I’ve come right back to the feelings that I used to have which is a fantastic feeling to have.

“Now I’m putting out the numbers and doing things that I was previously.

“It’s a really good indication that [Methotrexate] wasn’t working for me so now I’ve gone completely natural… and just changed my diet a lot: less dairy, less red meat, cut out a lot of sugars – everything like that. Me and my wife have studied it and we’ve found that this is the most beneficial thing for me.”

RIDE Media: You didn’t mind a beer. How’s it been these last couple of years while you’ve been dealing with the arthritis and how to remedy that?

Jack Bobridge: “That obviously comes with sugar, a lot of carbs and a lot of preservatives so that’s been eliminated over the last few years.

“Being married and having a kid also sorts a lot of things out.

“Being a dad and family-orientated now, that sort of stuff is in the past – part of my younger history. But obviously [eliminating alcohol] it helps a lot of things with arthritis. I can definitely say that’s long gone and if it happens now it’s on a very rare basis…”

RIDE Media: Parenthood kind of does that to you. It’s pretty easy to look at the bigger picture and the bigger things in life… how is life as a dad…? How old is Amelie?

RIDE Media: Do you expect she’ll come along to the track on Saturday?

Jack Bobridge: “Yeah, she’s coming along tomorrow actually. Josie and Amelie will be arriving tomorrow into Melbourne so they’re coming along for Saturday night which is going to be fantastic to have them there for a bit of inspiration while I’m doing my hour. I’m really looking forward to seeing them. I haven’t seen them for a good week and a bit now…” 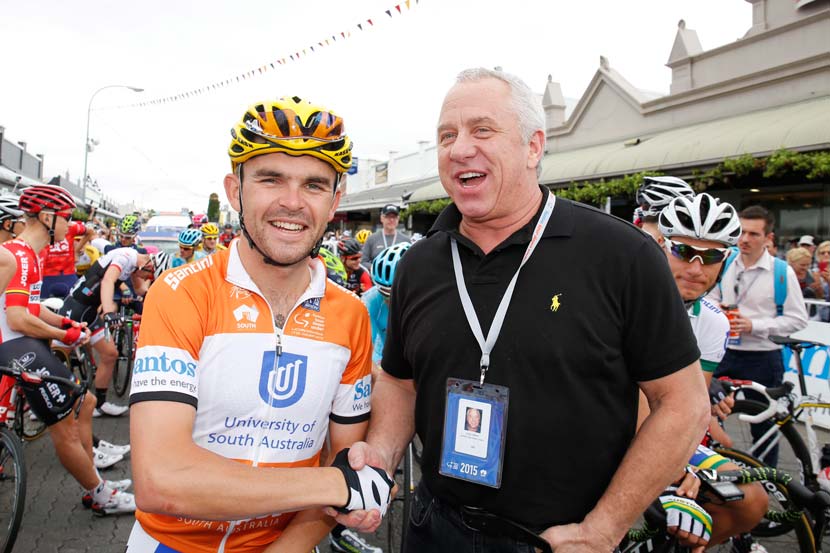 Bobridge and LeMond… champions from the present and past.
Photo: Yuzuru Sunada

RIDE Media: A couple of years ago there was a big fuss when a certain Texan came to town and you went for a training ride with him. He touted you as being the Next Big Superstar. You’ve [since] won a world title [on the road, the under-23 TT in 2010], you’ve been to a couple of Olympics. You’ve got a long future ahead. What’s the best of Bobridge yet to come? Is Rio the major goal or the hour…? What’s in your thoughts at the moment?

Jack Bobridge: “Obviously if you look at the résumé up to date, for a 25-year-old, it’s pretty high in terms of track results and things that I’ve done – Olympics and Comm. Games and world records and world titles… I’ve had a few road wins now and the national road race champion.

“Rio is obviously my big picture at the moment; leading into next year, I’ve made some big choices – to ride within Australia, to try and do that with the track squad. The next big focus is definitely to win the Olympic gold in the teams pursuit and I don’t think that’s it; I’ll only be 27 at the Games. It’s starting to get on but I think there’s still a lot of time to do a lot of great things along the way and I’m obviously open to that and willing to do that. I’ll be striving to get a result through to there and beyond Rio.

“I think I’ve grown up a lot. I’m getting older, having a kid and getting married and everything. I think it’s hopefully only the start of what’s to come in my career.”

RIDE Media: Do you think about that ride with Armstrong much?

Jack Bobridge: “It’s quite a while ago now but obviously I think about what he said. It pops up and I read it every now and then so I’m always reminded about it.

RIDE Media: And what about a more generous equivalent… have you heard from ‘Wiggo’ about what he thinks of you? Because it looks like he could be part of a rival quartet in Rio… and he’s a pursuiter much like you. Have you heard from him about you?

Jack Bobridge: “No, I haven’t actually. Have you?”

Jack Bobridge: “Oh, he’s a wonderful athlete – you’ve just got to look at what he’s done. There’s nothing he hasn’t done. I think he’s an inspiration to anyone that follows him and watches what he’s done.

“There are things that he has done that people will never do in a whole career of cycling. He’s someone that you have to look up to. I don’t think there are any ‘ifs’ or ‘buts’ there. He’s one of the greats of cycling, not just road cycling but track cycling and he proves that time and time again when he steps on the bike.”

Jack Bobridge: “Oh, one would only hope that he’s on top. I hope that I can do a good enough time, obviously, to beat [Wiggins] but only time will tell.

“I’ve said that I can only control what I’m in control of on Saturday night. Records are definitely there to be beaten and they will be beaten over time.

“I’ve beaten an ‘unbreakable’ record before so people do break them and if they do happen to break them after I have an attempt at it on Saturday night, well…

“There’s nothing saying that I’m actually going to break it on Saturday night: 51.8km/h is still very fast. And if I can’t do it and they break the current record – well, you’ve got to take your hat off to anyone who can ride that fast and break any world record.”

Jack Bobridge: “Well, it’s hard to say because at this point in time I’m still watching the conditions. It’s going to come down to gear selection and conditions on the night.

“I’m wishing that I can beat the current record but, like I said, it’s still 51.8km and hour and that’s still very, very fast.

“If I can break it, I’ll be over the moon but I think the first target will be to break it and then we go from there.”

RIDE Media: It’s been an absolute pleasure talking. We’ve covered a lot of topics. Is there anything you’d like to add Jack?

Jack Bobridge: “Uhm, no. Not really. I think that’s covered a lot.

“At the end of the day, where I’ve come from and where I want to head has obviously changed a lot; being a family guy and being a father now has changed the way I do things and the way I represent myself on and off the bike. I think that shows in my results again lately. I’ll continue to do that and hopefully it brings bigger and better results.”