Another stanza in Jack Bobridge’s cycling career is set to start on 1 January 2016 when he joins the Trek Factory Racing team thanks to a new contract that was brokered by the young South Australian’s manager Baden Cooke.

RIDE Media spoke to Bobridge moments after the news of the 26-year-old’s return to the WorldTour was announced. Below is a transcript of that exchange… 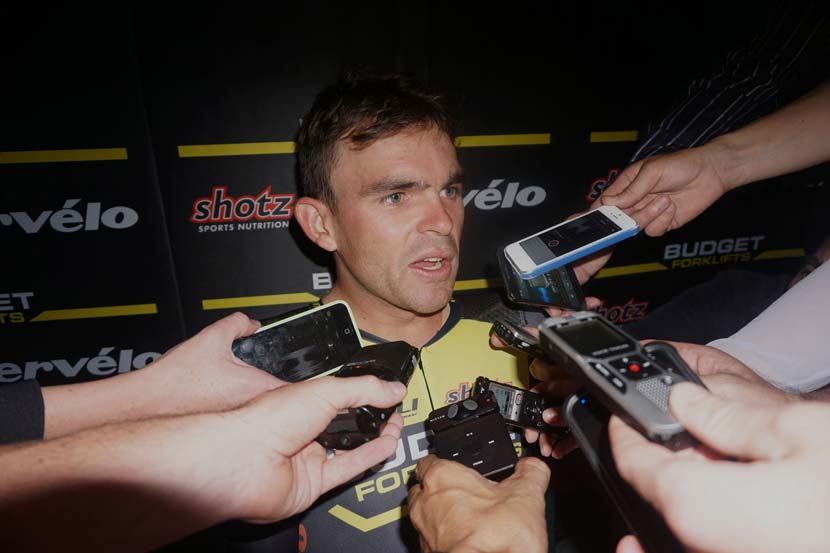 Bobridge is no stranger to attention… he’s been a professional since the age of 19 and now he says he has a chance to “hit the reset button” and get back to the WorldTour with Trek Factory Racing.
Photo: Rob Arnold

RIDE Media: It’s been a rollercoaster ride for you since about 2009. You’ve been a professional since winning the (under-23 TT) world championships and now you’re coming back to the WorldTour. You must be pretty pleased about this news.

Jack Bobridge: “For sure. It has been a bit of a rollercoaster – up and down… I guess I’ve come from some highs and some lows but to get the second chance with Trek is exciting for me and for the family.

“To get back in the WorldTour is good.

“Obviously myself and my family still believe that I’ve got a few things to do on the WorldTour circuit and I can be better than I have been so we’re pretty excited to get back overseas and to race with Trek.”

RIDE Media: How important is the road going be as a factor in things up until Rio? Are you going to have a big road program or is [Trek Factory Racing] going to nurture your track ambitions?

Jack Bobridge: “They’re 100 percent behind the track but I think the road is still going to have be a big factor in Rio so that’s something that we have to discuss over the next few weeks with the national track program and Trek and see what best suits me. That will give me the best program that I think I’ll need as we approach the Olympics.

RIDE Media: Can you talk us through a bit of the negotiation process with Trek? How long have you been in talks with the team?

Jack Bobridge: “I’ve left that all up to Baden Cooke. He’s been doing a lot of the negotiations over the last few months… that’s something that you have a manager for.

“I switched across to work with Baden at the start of the year and ever since I’ve been with him he’s been fantastic. He’s onto everything. He’s straightforward, which is great. He doesn’t beat around the bush and he lets me know what’s happening and whether something is realistic or not.

“He approached Trek and saw that they were interested and he chased them and followed it up and he’s managed to get me back over there.

“Trek obviously had to make the final decision but to have Cookie on my side as a manager since the start of the year has been great. He’s done wonders.”

RIDE Media: My understanding is that you’ll be based in Girona again, is that right?

Jack Bobridge: “At this stage, yeah. I think I’ll go back to Girona and base myself from there as I’ll be in and out a fair bit, I’d imagine, with the Games and training camps and races, etc. So I’ll set myself back up in Girona where I know it’s easy living and we’ll see where we go from there.”

RIDE Media: You had your DUI in Spain. Do you feel like all of that party atmosphere that you had been caught up in is behind you now?

Jack Bobridge: “One hundred percent! I’ve changed my life and my antics and the way I go about things now.

“I’ve got a family and I’m married.

“[The DUI incident] happened in Spain but I’ve put that behind me now. It was a long time ago… and I’ve changed a lot of things and the way I conduct myself off the bike. I don’t really get mixed up in that sort of stuff anymore or want to look for it.

“It’s all about racing and training and the Olympics and what I can do for the new team, Trek, and for the family.” 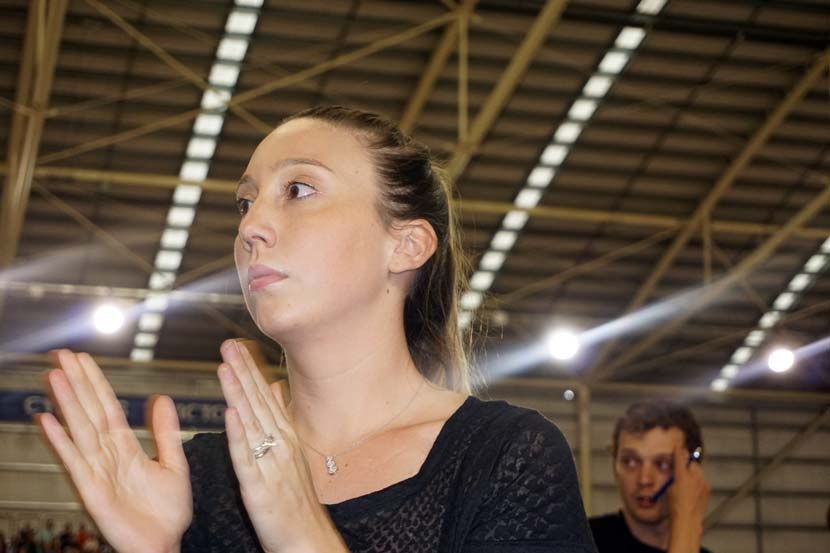 Josie Tomic has experience success as a cyclist herself. She was married to Jack Bobridge as he prepared to embark on another European adventure at the start of 2016.
Photo: Rob Arnold

RIDE Media: How important is it to have a family when you’re looking at being professional athlete? I know that it has tamed you a fair bit. Do you feel that it’s going to be easy to take your young daughter and Josie back to Spain and reintegrate into a European lifestyle after a year back in Australia?

Jack Bobridge: “I think, for myself and for the family, I hasn’t been a bad thing to come back to Australia. It’s like hitting the reset button and refreshing.

“The whole family – Amelie, Josie and myself – are excited to go back and have another go. Obviously my daughter [who just turned one] is still too young to know what’s going on but we’re ready to get back and adjust to the European lifestyle.

“We really like the culture of Girona in Spain. We’ll get back amongst it and I’m sure we’ll fit in pretty quickly. We still have a lot of friends there and not just within the cycling side of things. We’re really looking forward to getting back there and catching up with everyone and going about my business on the bike – but this time a little bit better and, hopefully, I can really step up and have a good season.”

RIDE Media: You burst onto the scene as a phenomenally prodigious 18-year-old; you go to the Olympics a month after turning 19 and then you’ve had a career which has had a bit of stop and start. Do you sometimes wish that you’d eased it off and maybe come into it a bit slower?

Jack Bobridge: “That’s a good question. Ever since I came out of the junior worlds [in 2006] it has been pretty full-on and go, go, go!

“I really haven’t had the time to really step back and assess things or see where I was going until this year when I came back to Australia.

“If I look back at it, and I guess every athlete is different, but perhaps I could have slowed up a little bit or been able to step back a little bit from it… but in saying that I’ve done a lot and I’ve learnt a lot during my career already so I definitely don’t regret anything.

“I guess it’s gotten me to where I am today but I think it’s that time when I’ve got to step up again and really show that I want it and to strive to get some good results next year for Trek.” 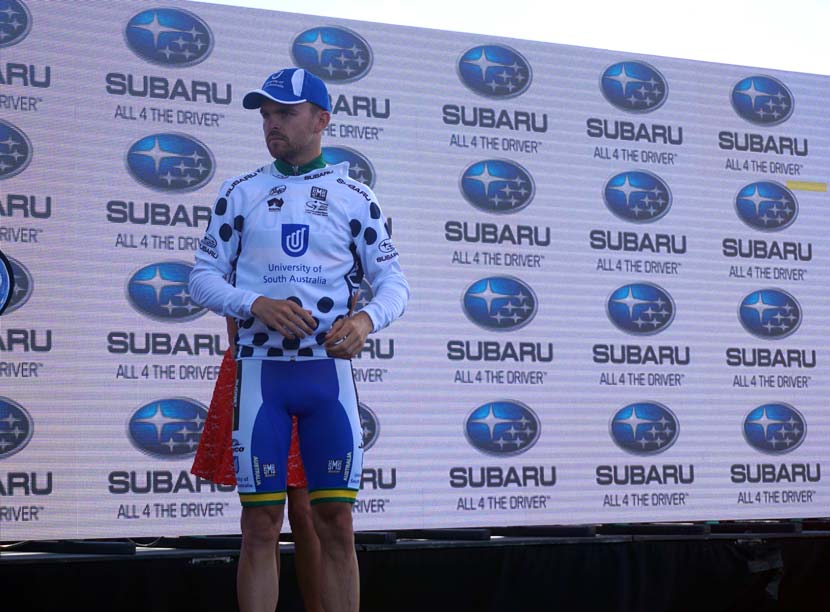 Bobridge: King of the Mountains at the Tour Down Under.
Photo: Rob Arnold

RIDE Media: The arthritis is another thing that’s hindered you. Is that all behind you?

“Yeah. I believe I’ve gotten on top of that now. I’ve changed my foods and different things like that and I believe that’s all under control. In the past year or two I’ve really gotten on top of it and been able to maintain and control it so it’s definitely not something that I’m worried about for next year.”

RIDE Media: We’ve seen another South Australian burst into the headlines this year with Rohan Dennis winning the Tour Down Under, taking the hour record for a while, and winning the opening stage of the Tour de France. I know you’re really close with Rohan insofar that you’ve won an Olympic silver medal together… has his success in 2015 inspired you?

Jack Bobridge: “What he has done is definitely inspiring for anyone, you’d have to be silly not to say that. He’s been going fantastically well these last few years building up to the results he’s achieved this year.

“If anyone was to say it wasn’t inspiring, they’d be lying I think.

“He’s done great and we’ve raced each other for years and years so to see what he’s doing is fantastic. He’s come a long way but he’s the kind of guy who is very committed and determined – when he wants something he’ll strive for it and he gets it. That’s great to see.”

RIDE Media: Do you think you’ll try and take on Bradley Wiggins’ hour any time soon?

Jack Bobridge: “Nah! I don’t think so – at least not before the Games anyway. Possibly afterwards but it would be too much to try and squish in before Rio.”

RIDE Media: I know that Rio is a big priority. Do you think it will be Australia versus Britain in the team pursuit final at the 2016 Olympics?

Jack Bobridge: “It’s pretty hard to say. We’ve seen New Zealand is now also stepping up and really putting the hand up to be counted and set good benchmarks. At the worlds, with their ride of 3:54, it was clear to see that they’ve got a fantastic group of riders.

“Time will tell but to put two teams in the final at this point would be a little bit silly on our behalf. I think we’ve got to keep doing what we’ve been doing and have a good look at the other teams: Great Britain, New Zealand… in the upcoming World Cups and see where everyone is at but I definitely wouldn’t put New Zealand out of the top two yet – not at all! Next year is going to see some of the closest competition we’ve had in a long, long time.”

RIDE Media: I don’t think there’s been a track race that is as anticipated as what that one – the team pursuit final in Rio – is going to be. But just jumping back to the Trek team and the ambition the people involved have for you… how do you categorise yourself in that team? And what sort of program do you expect you’ll be doing in 2016?

Jack Bobridge: “I think the team is pretty keen to get me back on the time trial bike and strive for prologues and time trials. After that we’ve still got to work out what I’ll do – whether it’s Classics or stage races or Grand Tours… we really have to sit down and put in place what’s going to be best.

“I see myself doing a lot of the shorter stage races with prologues and time trials and I think they’re happy with that too. That’s going to be the starting point and we’ll go on from there.”

RIDE Media: Congratulations on the new contract. We’ll look forward to watching the Next Phase of Bobridge…

Jack Bobridge: “Thanks. It is an exciting time and I can’t wait. Hopefully I can show up in some races again next year and get some good results.” 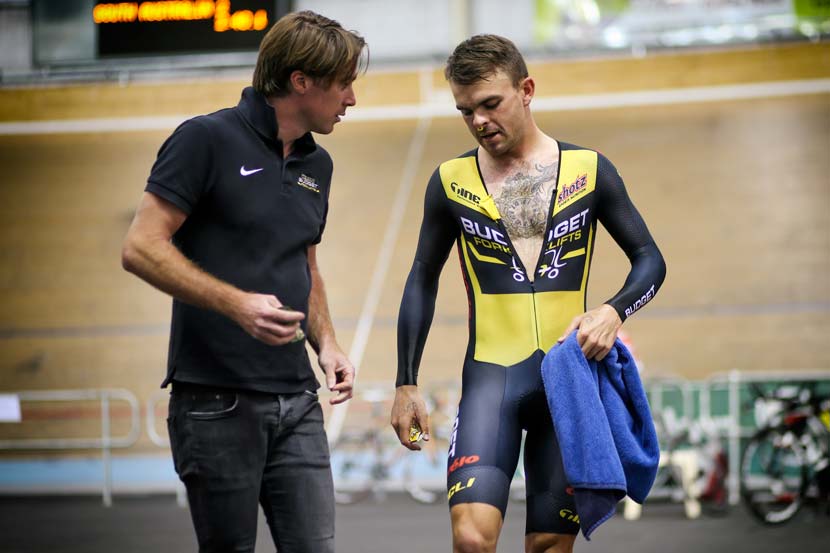 Cameron Watt from the Budget Forklifts team and Bobridge before the attempt on the hour record in February 2015.
Photo: Mark Gunter