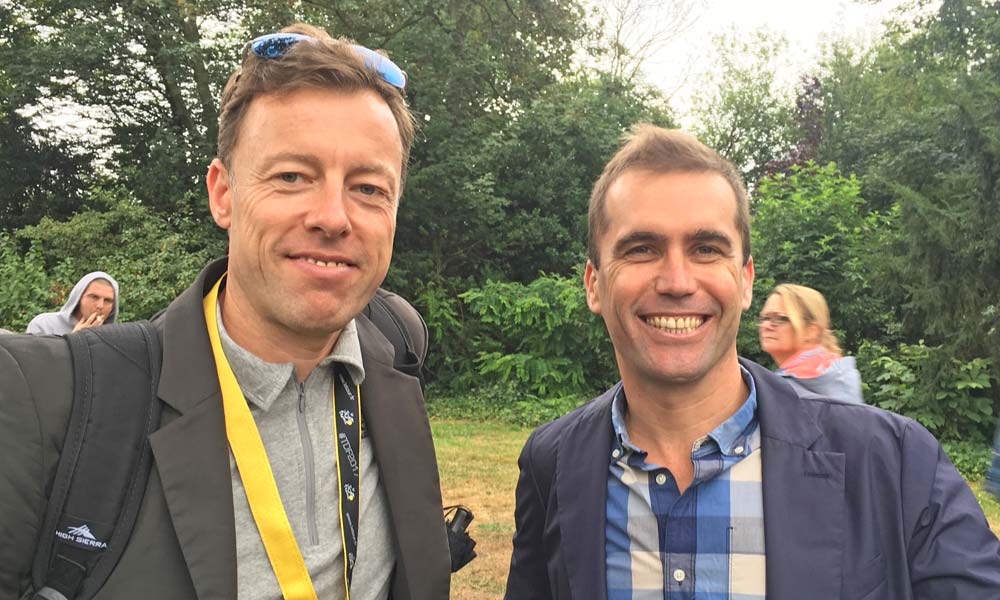 We speak to one of the selectors about the line-up of nine riders on the Australian team for the elite men’s road race in Norway later this month. Brad McGee explains the decision making process and offers a comment on each rider…

The road cycling world championships are only 12 days away and Cycling Australia has announced the selection for the races that are to be contested in Bergen, Norway.

Earlier today we shared the names of the men and women who will wear green and gold striped jerseys towards the end of September. The Australian team has enjoyed considerable success in the championships over recent years but only once has one of ‘our’ riders won an elite road race.

Cadel Evans claimed the rainbow jersey in 2009 and it was a special moment in Australian cycling history. The next year, when the championships were contested in Geelong, Michael Matthews won the under-23 road race.

There have been numerous gold medals for Australians in time trials – under-23s and elite alike, with special mention going to Michael Rogers who became the first triple champion in the TT winning successive titles in 2003, 2004 and 2005.

This year, there is hope for the Australian men and women. Leading the charge is Michael Matthews who has consistently delivered solid results in the races he targets. And Bergen has been earmarked by the 26-year-old long ago as a race he should focus on.

On the morning the selection was announced, RIDE caught up with one of the four national selectors and considered the Australian line-up for the elite men’s road race.

(As we approach the championships, we’ll offer some commentary on the other races but for now, our conversation focuses on the final event of the championship – and whether Matthews can improve on his silver medal from 2015.) 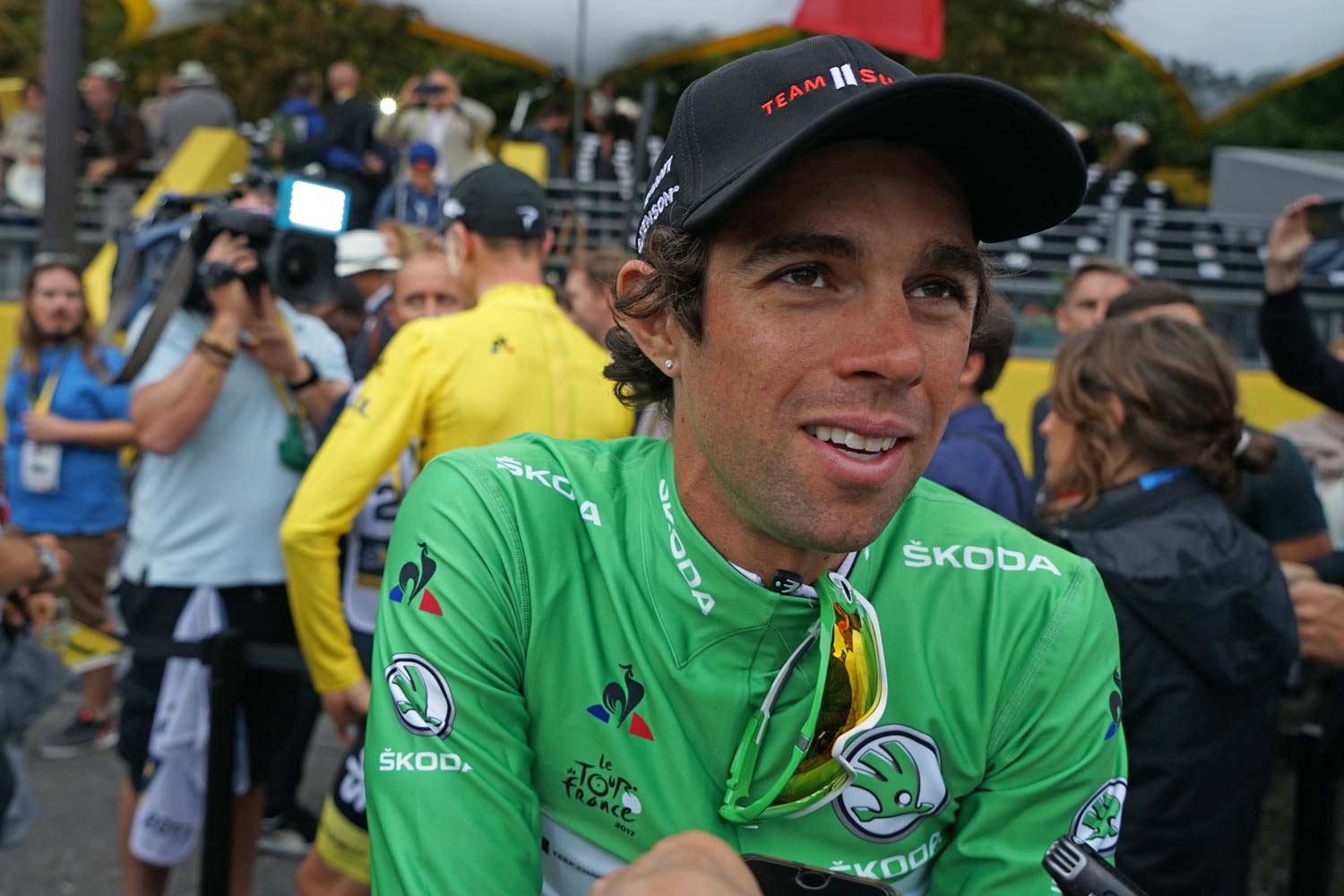 Michael Matthews has an impressive record of achieving the goals he’s set himself… the green jersey at the Tour de France is one such example.

RIDE: We just got the line-up for all the Australian teams for the worlds in Norway later this month. I’m talking with Bradley McGee who is one of the selectors. For the record, who are the other selectors?

Brad McGee: “We’ve got Rik Fulcher, who has been a long-time colleague of mine from NSW Cycling and he’s been working with Cycling Australia for a number of years. He leads up the under-19s, I believe, and also the men’s elite when it comes to road.

“There’s also Dave McPartland who is currently a DS with Orica-Scott and he acts as a bit of a European consultant as far as man-on-the-ground over there.

“Then there’s Simon Jones himself, who chairs the selection, of course, as high performance director.”

It’s an interesting time and it gives us plenty to talk about. We see Michael Matthews as the leader of the elite men’s road race. I wonder if we can focus on the elite men’s race just for this discussion… Matthews is the obvious leader. Can you just talk about finding the right guys to surround him?

“Obviously there are a couple of components. It’s got to be course-specific, so the athletes that we take on to support Michael need to be able to deliver on that course.

“We’ve done as much analysis as we can.

“I haven’t personally been there but we had Michael [Matthews] himself and Heinrich Haussler did the recon earlier in the year. And, of course, these days you can get information from many different avenues.

“Most importantly we need to have athletes who are connected not only with themselves and their preparation – so we can guarantee the physical needs on race day – but also connected with each other, particularly with Michael as our clear leader.

“This things are difficult to define but needed all the same.

“That’s largely where the work goes into when selecting the right combination of riders to connect as a team.”

It almost sounds like you’re referring to the conflict that existed between Michael and Simon Gerrans a few years ago. Am I right in that assumption?

“Ah, not at all. Well, that is a component of this selection as far as lessons learned in the past being applied here. But what I was eluding to there is really based around that need for connectivity between the athletes and then delivering on the day.” 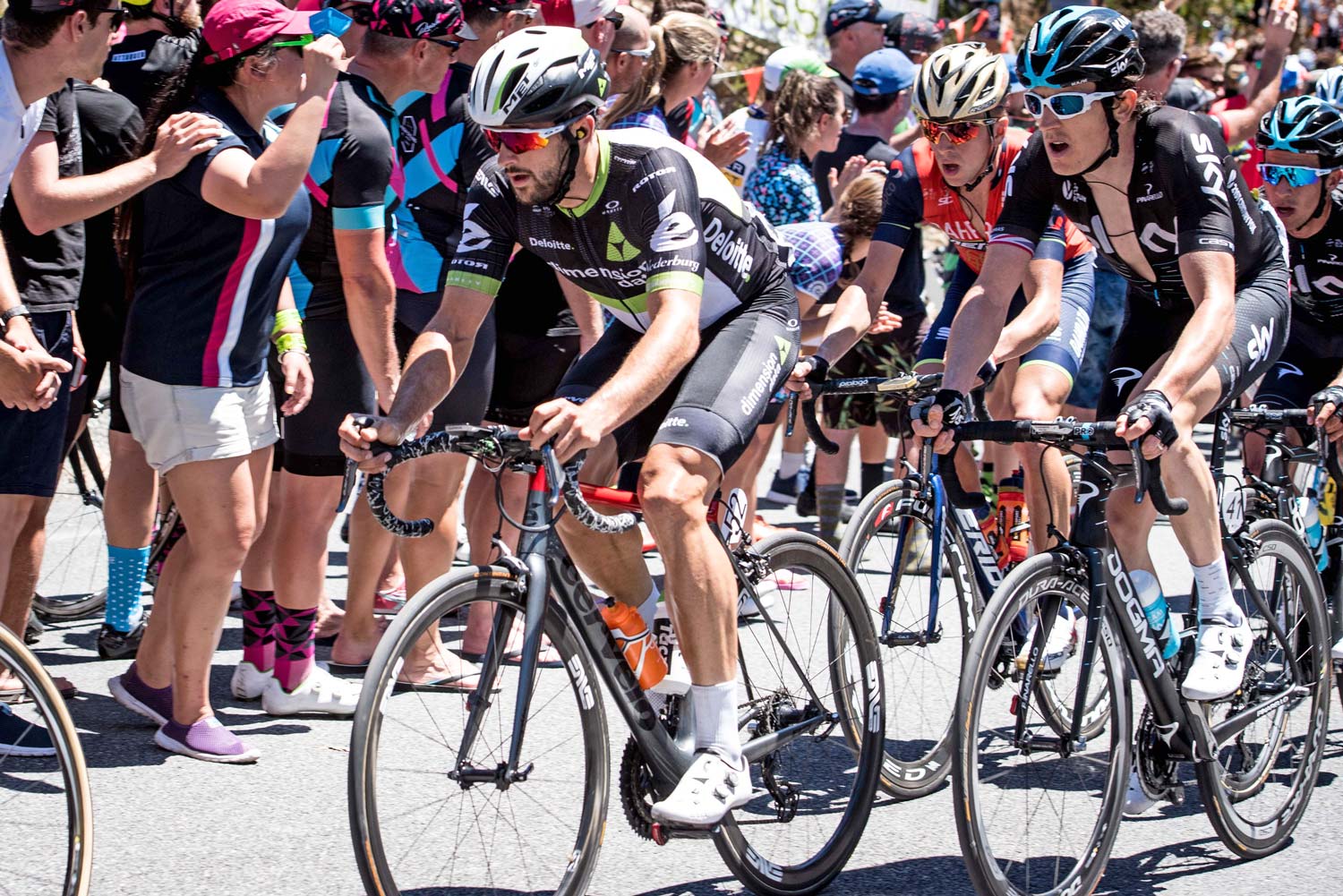 Nathan Haas has missed out on selection in 2017 despite having an excellent early season and making it clear he was keen to race in Bergen.

It’s a stellar line-up if you consider the nine guys. All of them are champions in their own right. There are a couple of omissions. I wonder if I can raise them without wanting to seem argumentative… but Nathan Haas strikes me as a guy who would be suited to something like the course in Bergen. I know he was pretty enthusiastic. Did you have dialogue with him?

“Absolutely. And we look forward to Nathan being part of the Australian team in future campaigns. This time around it wasn’t his turn.

“Not to go too far, but we look forward to Nathan potentially forming a leader type role in future campaigns.”

So you had to tell him “no” this week. Was that a bit difficult?

“It always is. But, once again, the athletes have been outstanding and respectful and remain, where needed, on the reserve list – in particular a guy like Adam Hansen who is just an absolutely outstanding bloke and a real cornerstone of many campaigns with the Australian team. His time will come again, it just wasn’t this time around.

“Again, all the athletes I’ve spoken to – whether they are ‘in’ or ‘out’ – it’s a pretty unique group that I’m honoured to be able to work with.” 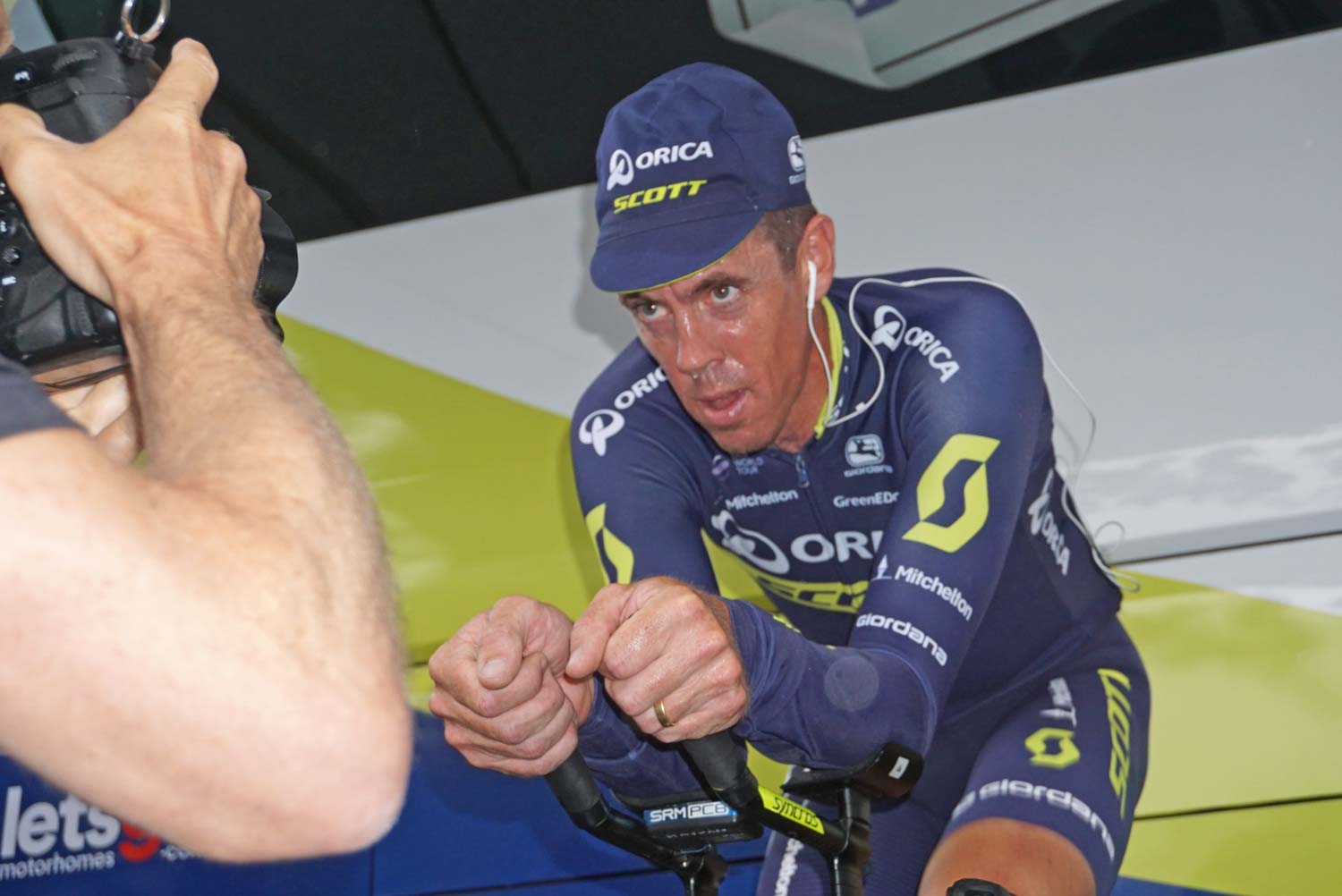 I know if I get you talking and we’re covering nine guys, you could go on for a long time. But I’m going to run through the names of those on the team and I wonder if I could get one sentence on each of the men for the elite road race. Can we do it nice and quickly?

“‘Clarkey’ is a seasoned campaigner who has delivered himself at the worlds – he was awesome in Rio for us last year and has remained committed to this team from day one. He’s looking forward to sharing his experience and being there for Matthews deep into the race.”

“Between him and ‘Durbo’ it’s hard to pick who is the most excited to be at the worlds. We’ve monitored Mitch all year; he’s definitely on the up – and we know he’s got the skill set to deliver a very needed role at the worlds.”

“Well, there you go: ‘Durbo’, as always, is super motivated. He had an injury and we’ve monitored that very closely. We’re impressed with his recovery and we expect him to return to full strength by race day.”

“One of my arguments to go in with a full field of nine is always to allow for one or two spots for developing riders as we look to future campaigns.

“Michael Matthews was himself present in the Florence worlds (in 2013) for that very reason and obviously it has paid dividends.

“We’ve learned quite a good lesson there and Jack will slot in well with his selection.”

“Yeah, absolutely. He brings a lot of experience. There’s a minimum amount of physical form and ability we need, of course. But it takes a lot more than just strong legs to win bike races and we look forward to Heinrich’s character and experience and his total commitment to the team. He’ll be instrumental.”

You’re confident that he’s come back from his injuries okay?

“Yeah, as we’ve done with a few other riders, we’ve obviously been very thorough with Heinrich. And we’ll continue to do so… just because the selections are done, it’s not over. It’s now about guiding everyone in to be on peak performance on race day.”

“It goes without saying that he is just a phenomenal bike rider who has a great presence and an ability to hold that captaincy role. We’re blessed at Cycling Australia to have Hayman still available and willing to do the job.”

Without Matthews on the list, we could consider Jay McCarthy (24) a rider who could vie for leadership status…

“Yeah, absolutely. Similar to Haas, we expect Jay to step up and put his hand up for leadership potentially in future campaigns. We need a rider like Jay for this year’s course, a particular component of the course, but it’s not a race that would really allow him to express himself for a victory. But he is 100 percent committed to supporting Matthews and he will be an absolute key rider throughout the course of the race.”

Michael Matthews (26) has been referenced already…

We’ll just round off the list: and we’ve got Rory Sutherland (35) who is one of the most reliable domestiques in the world…

“If you look at his performance at Liège-Bastogne-Liège this year – doing a huge amount of work under trying conditions for his leader, Valverde, to get up for the win… he’s amazing. Plus he’s actually got a victory this year which is quite rare for a domestique. Like all the other blokes, he’s 100 percent committed.

“We really are blessed with the quality and commitment from all of these athletes.”

Brad, it’s always a pleasure talking to you about cycling. I’ve been trying to talk to you about this for a couple of weeks but there have been some sad events to cover in Australian cycling. I know you’ve been to a couple of funerals in the last little while so my thoughts are with you and the loved ones of all of those who are now absent.

“Cheers… I appreciate it.”