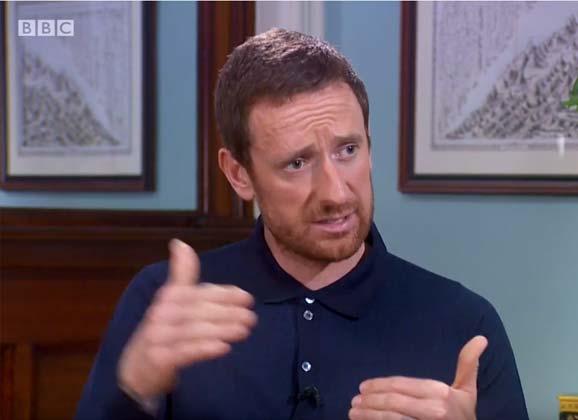 Much has been made of the TUE predicament that Bradley Wiggins has found himself in following the release of data by hackers.

Overnight, Wiggins appeared on BBC in an interview with Andrew Marr. The clip has been posted on YouTube (see below) and much has been made of what was said.

It was a discussion that didn’t actually reveal too much if you look at the exact wording used by Wiggins (or Marr).

Topics were raised, comment was offered, and little was concluded.

Nonetheless it will receive plenty of traction in the coming days as people try to come to terms with the explanation offered by Wiggins in what is indeed a curious situation.

For the purpose of understand the exchange, we have transcribed the interview so you can read the commentary. 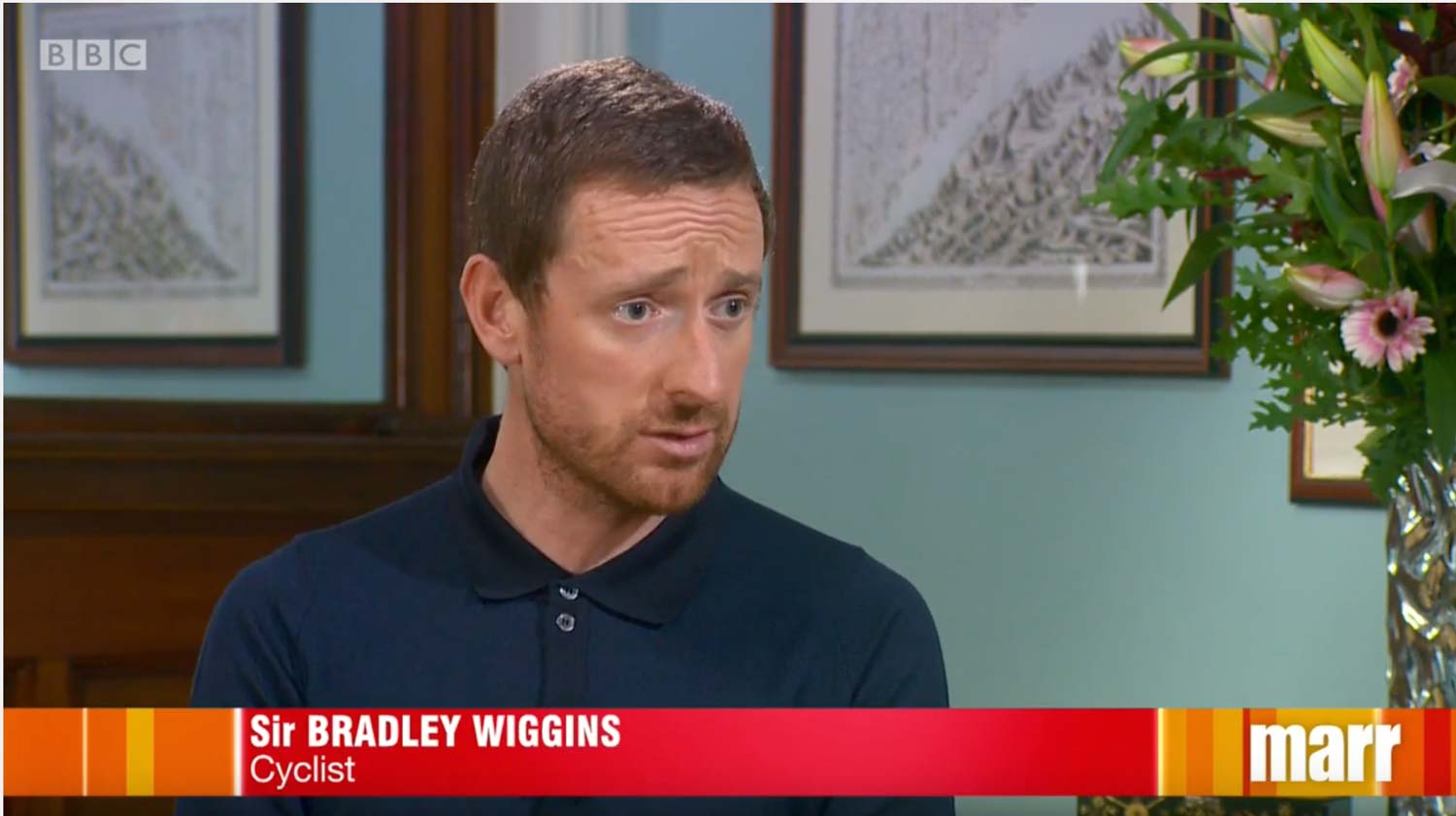 Below is a verbatim transcript of the BBC interview. Every effort has been made to punctuate it accordingly but there are several instances when sentences weren’t finished and comments not completed.

Andrew Marr: I asked him, what he had used and why.

Bradley Wiggins: “It was prescribed for allergies and respiratory problems.

“I have been a lifelong sufferer of asthma and I went to my team doctor at the time and we, in turn, went to a specialist to see if there was anything else we could do to cure these problems. He in turn said, ‘Yep, there’s something you can do but you need authorisation from cycling’s governing…”

You have ask for permission to take it?

“You have to show and provide evidence from a specialist that they will then scrutinise with three independent doctors and authorise you to take this product and at that point then, once I have a certificate from the World Anti-Doping Agency and the sport’s governing body – only then – do you take the medication.”

Now, the trouble with this particular drug is that lots of people say it is also a performance-enhancer. There was a German cyclist, Jörg Jaksche, who says that after he’d taken it, he said, ‘You’re going to suffer less’, ‘You’re going to be less tired as your recuperation is faster because of the anti-inflammatory effects…’

And other people have said the same kind of thing. David Millar said it was the most potent drug that he’s ever taken.

“Yeah, but I think they were abusing that drug in that era. This…”

So they were simply taking more of it?

“And this was to cure a medical condition and was, was…

“The governing body, the World Anti-Doping Agency, everyone said, ‘This guy is not…’ ‘This is about not…’

“This wasn’t about trying to find a way to find an unfair advantage, this was about putting myself back on a level playing field in order to compete at the highest level.” 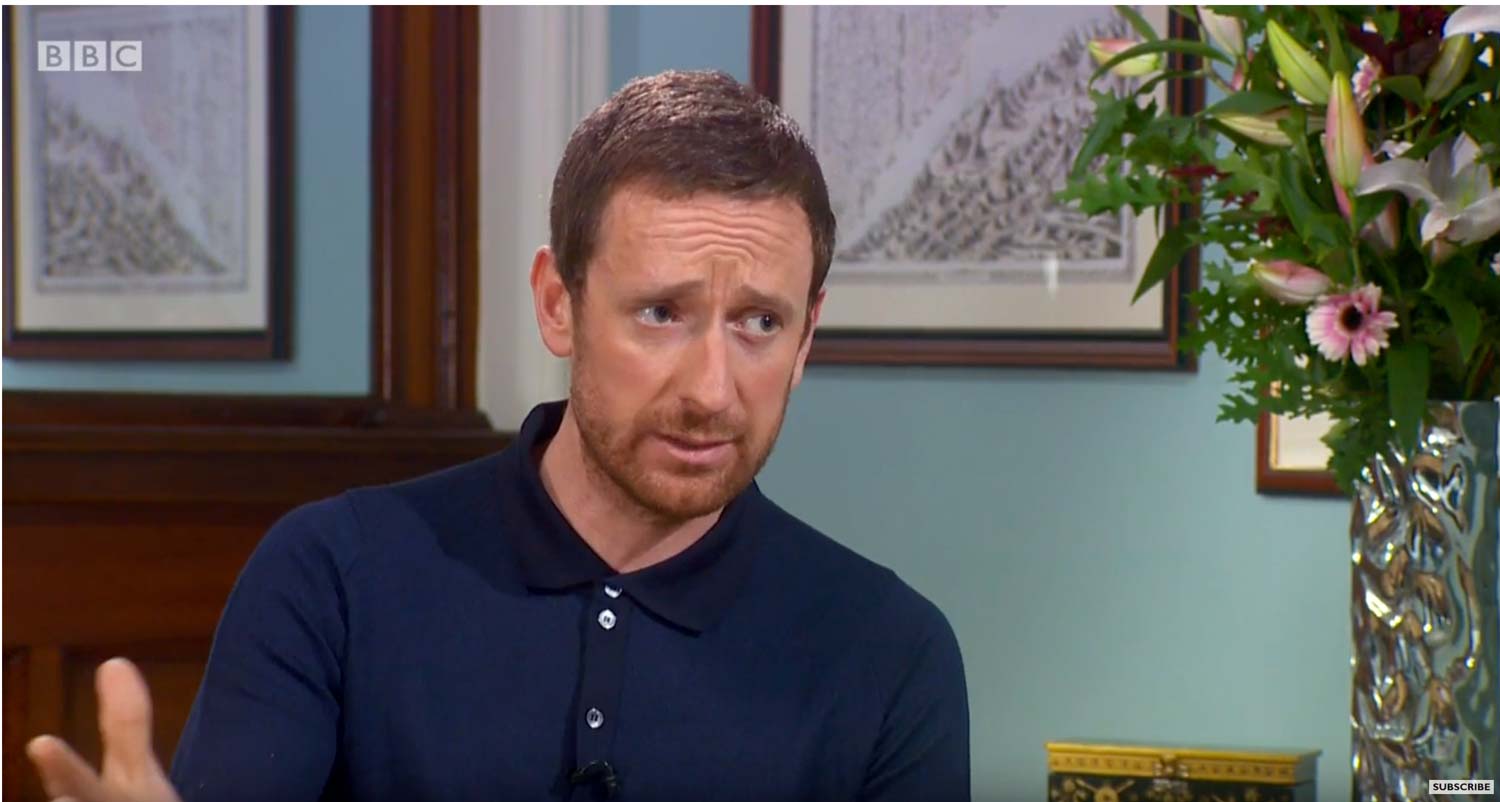 Now, you used it three times. The first couple of times – from your medical records – you were clearly unwell. But the third time, before that 2012 Tour de France, you were doing incredibly well. You were fanta… you were caning them all at the early stages. You were the favourite to win. There seemed to be no medical problem and yet you took it again. Why?

“Yeah, I really struggle in that period: June, July is the worst period for that – April, June, July, right through those months and I was having problems.

“The team, at Team Sky, you know, we’ve got the medical team there. Everyone, the coaches, checking everything saying, ‘Look Brad, you’re on track here. You’re the favourite to win this race now. We need to make sure the next three weeks – if there’s anything we can help with at the moment…’

“‘Well, I’m really struggling with this breathing last week. I know it didn’t look like it. But I really… is there anything else I can do just to make sure that this doesn’t become an issue into a three week race at the height of the season?’

“Ah, and in turn, I take that medical advice.”

Now we should emphasise that nobody is suggesting that you have done anything illegal at all but David Walsh who was the journalist who exposed Lance Armstrong, and was invited in by Team Sky for quite a few weeks to watch you all – and who has been involved with you – says that it’s not illegal, but it looks bad. Do you understand why he says that?

“I can understand the… that it is still an open wound in our sport and as I’ve said, this particular drug was abused back in that era. But I think, I think, as I stated, even with the needle comments that I made: this was about… at that time, if I can paint a picture of the landscape at that time, in 2012, right at the height of Lance Armstrong and just before the crash – as it were with him – that the landscape… ‘Have you ever used needles?’ It was always a loaded question with regards to doping. Intravenous injections of iron, EPO etc.

“No one ever asked the question: ‘Have you ever had an injection by a medical professional to treat or cure a medical condition?’

“There are two sides to that. And at that period in time it was very much with a doping emphasis on the question.”

But you did say, ‘I haven’t been injected’, ‘I haven’t used needles except for vaccinations…’

And that wasn’t quite true, was it?

“I think at the time, the book I was… I wasn’t writing the book. I was writing it with a cycling journalist who is very knowledgeable on the sport and had lived through the whole era of the Lance Armstrong era and the doping era.”

So from your point of view ‘needles’ meant: have you been doping? And the answer was, ‘no’.

“All the questions at that time were very much loaded towards doping.”

Now, at the time that Team Sky was promoting its latest achievements, people were pointing to the vest you all wear, with the blue stripe down it, and somebody said, ‘That blue stripe represents the difference between doping and doing something illegal and we absolutely push up against the limits of what is allowable, we are really professional, we are really tough – we do everything we can to win but we never ever cross that line.’

Do you accept that in this you have been absolutely up against the line? I’m not saying you have crossed it but you have been nudging against it?

“We have rules and legislations in our sport and we are governed by cycling’s governing body and WADA, the World Anti-Doping Agency. Now those rules are there. As athletes, we don’t invent those rules. We have to abide by the rules and Team Sky especially – the biggest cycling team in the world – 100 percent, everything that they have done in this has been within the rules and abided by the rules that are set to us. And we are being scrutinised for abiding by the speed list – staying within the speed limit.”

And of course Team Sky has had a very, very hard time from lots of other countries. The French and others have been borderline insinuating about your team because you have done so well. They ask, ‘Are you superhumans?’ ‘What’s going on?’ Is this the kind of insinuation that you are just going to have to live with now because you’ve been so successful?

“I think the sport lives with that. And whoever is leading in the sport at that time. And at the moment it’s Team Sky; they’re leading the way. And they’re setting the standard for everybody and they’re the best at what they do.

“And unfortunately when you’re the best at what you do sometimes comes scrutiny, especially in a sport that has a tainted history.”

The use (and abuse) of TUEs is not new. It is a topic that has explored often in the cycling media space. The allegations and insinuations faced by Wiggins and others in recent weeks will, however, have ramifications in the future.

It is part of professional sport that athletes are scrutinised and that medical records queried.

There’s always going to be more to say but rather than hysterical reactions, we prefer to consider what’s transpired and offer appropriate comment and reports when necessary.

Expect more on this topic but for now, could we remind you of one concept that should also be reiterated often in the cycling media: ride your bike, it’s fun. Enjoy the sport, but see it for what it is…