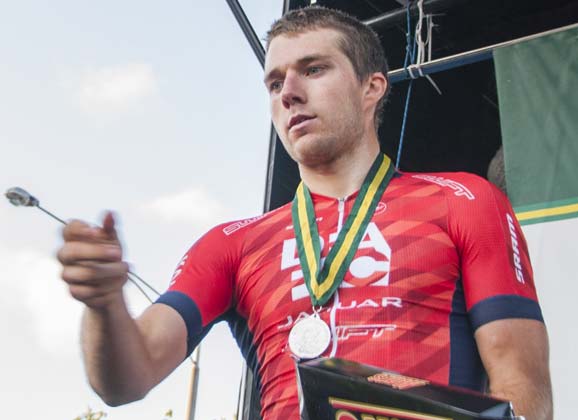 Brenton Jones turned 24 last month and has been steadily making a name for himself in the pro peloton for a few years now. He’s fresh off a second place finish in the race for a national title and today we spoke to the rider from Drapac Pro Cycling to find out some more about him, his racing, his power, his aerodynamic stance… and how he might be able to overcome his sprint nemesis, Caleb Ewan.

Click the SoundCloud file to listen to the interview and/or read the verbatim transcript of his chat with Rob Arnold below.

RIDE: I’m talking with Brenton Jones who has come second in the [Australian] national criterium championships in Ballarat last night. Caleb Ewan got the better of him but another second place for the season – and he’s had a few already, some of them Caleb.

Brenton Jones: “Yeah, for sure. It’s a great season that started off quite nicely; five second-place finishes already behind Caleb and we’re only the 7th of January [three stages of the Bay Cycling Classic and GC of that same series, plus the silver medal in the nationals].

“It’s a good start – a consistent start… but it would be nice to get on the top step and get a win but Caleb is in some incredible form and I think the start to the season for Drapac has gone quite nicely.”

We know you as a sprinter and we also know you as a bloke who has had a little bit of bad luck. How are you coming up from the injuries that you copped last year?

“Yeah, fine. I think I finished off my last race of the season, in Hainan, well.

“In stage one I had a pretty big crash that knocked me around a little bit but to finish that race on stage nine [with] a win, that gave me a lot of confidence.

“I’ve been able to bounce back with some good recovery.

“After the big crashes I’ve had, even back in 2011 in Toowoomba, I think I’ve learned a lot on how to recover properly and get back on the bike – and not only physical recovery but mental as well…”

It is a real mind game. When you hit the ground and you know you’ve done some [damage] to yourself, do you ever start wondering why you’re doing what you’re doing?

“Nah, not at all. That’s why I love the sport: I love the freedom and the adrenaline rush I get from cycling. It takes me all over the world so I think a crash is just part of the job. You’ve got to put up with it, and you’ve got to deal with it, recover and get better and get back on the horse – as they say.

“Crashing is part of it.

“I’m used to that now, which is fortunate, and hopefully – touch wood – there’s not big ones this year.” 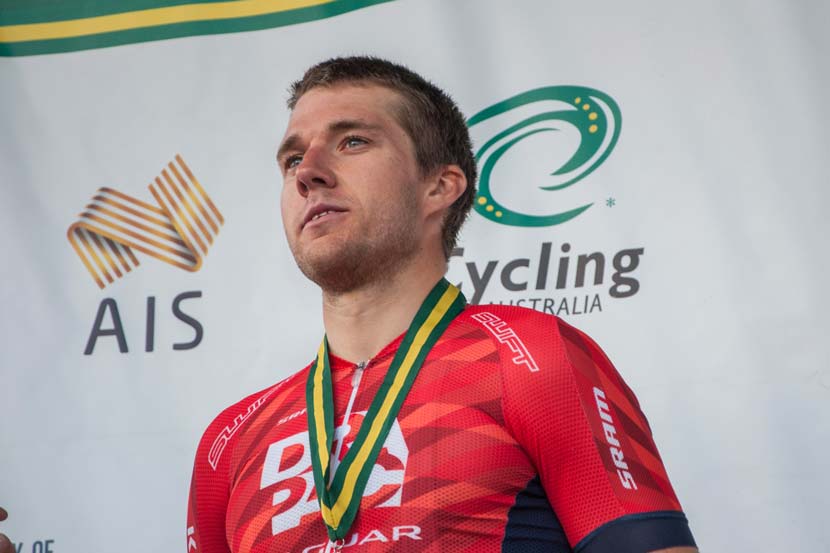 …We’ve got a coverline on the issue of the magazine that says, ‘Why do you ride?’ Do you have an answer to that one?

“I’m so passionate about cycling. It’s part of my life, obviously.

“Right now I’m a professional, it’s what I do for a job but it’s been part of my life growing up as a junior riding bikes. That’s something I like to take back into coaching and helping out with the junior programs around Warragul, my home club. There’s a lot of young talent coming through even primary schools – through Cycling Australia’s ‘Let’s Ride’ program, which I’m a coach for this year. That’s something I really like and it’s what makes me so interested and passionate about cycling.”

You’ve been a big proponent of the NRS because you’ve raced a lot on the local scene. There seems like a good bit of rivalry but also good camaraderie within that community. What do you make of it?

“For sure. I think, racing at the top end, you always have your rivalry between your competitors but at the end of the day, like anyone in any workplace, you’ve got to make your enemies your friends to some extent.

“It’s all games when we’re on the bike and there’s a bit of rough and tumble here and there but at the end of the day, off the bike, we’re mates and we’ve got to live with each other for the season – the racing year – and make it work.

“I don’t mind that camaraderie we have at the moment in Aussie cycling – it’s pretty good.”

…What do you make of the culture of racing around Warragul and where you grew up?

“Definitely. Victoria has got a good breed of guys coming through in the past and now as well. I’ve had a lot to do with Dave [Sanders] as well – not through the VIS but through racing – and to see him and all he’s done for the VIS and bringing the juniors through is fantastic.

“But it’s also the local clubs like Carnegie-Caulfield, St Kilda, and Melbourne Cycling League… there’s a lot of clubs coming up now that have junior development programs and the racing they’ve got on offer for club riders [provides] a fantastic setting for those guys wanting to come through and make it as a professional.

“That’s where I’ve come from and that’s what I’ve very fortunate enough to have such a successful state.”

The short and the tall of it… Caleb Ewan (left) gets down ridiculously low to win the sprint in Ballarat. Meanwhile, at 182cm such a stance is not possible for Drapac’s Brenton Jones.
Photo: Jean-Pierre Ronco.

Going back to the ride last night: we see the photos and we understand how Caleb sprints. He gets low, he gets aero, he’s fast, he’s got lots of talent and a big commitment; similar traits to what we’ve talked about with you, only that you can’t get as low as him. If you’re 182cm tall and racing at 80kg what can you do when you’re coming off a wheel of a guy like that to try and overcome him?

“I don’t know. I’m going to have to tell you that when I hopefully do at the Tour Down Under actually… but at the moment, of the five second places I’ve had this year already behind him I’ve unfortunately not been directly behind him.

“I’m waiting for the opportunity to get behind him at Down Under and hopefully I can snivel a victory there.

“For me the goal is to get in front of him, beside him, or directly behind him and really give it a crack because I know I’ve got the speed and I know he’s not that much faster than me.

“If I get the right timing or the right position I might be able to roll him.

“I think it’s about the confidence but also the position.

“In terms off coming off a guy of his size, it’s going to be hard: you’re going to be in the wind as a big guy like me but I think it’s doable.”

Low, fast and victorious… Ewan speeds ahead of his rivals in the criterium nationals.
Photo: Jean-Pierre Ronco

Size does give you the extra power but we are really seeing the gains of aerodynamics in this instance, do you think – or not?

“Yep. For sure. Aerodynamics is everything.

“I’ve been pretty happy with my set-up on my Swift [bike] last year and this year. I’ve got a negative [rise] stem and I’m as low as I could get as a big sprinter.

“I’m a powerful guy. I like to sprint more upwards but I think by getting that narrow edge and a frontal surface that’s a big lower than others is going to help – you see that with Caleb, he gets down and his nose is nearly on his wheel.

“That’s something I could never do but for him, it’s a weapon.”

I’ve seen him in the wind tunnel and I know what positions he’s dreamed up… have you deliberately gone to the extreme to see how beneficial it is to get a more aerodynamic sprinting stance?

“I’ve actually been a witness recently of a couple of juniors doing a wind tunnel test but I haven’t personally done any myself – which, again, is another little one-percent advantage hopefully I can draw from this year or the following years to come in my professional career.

“The fact that I haven’t done that yet means there are, potentially, some big gains I can get from that…”

[The wind tunnel testing] is quite fascinating isn’t it? What did you take home from it. What alterations did you consider for yourself after just sitting in on a session?

“Ah, to be honest, I was quite happy with my set-up. I’ve done a few video footage [sessions] with GoPro and a few other takes on my position as a sprinter. We focussed on it at a training camp with Drapac a month ago and while training by myself and with my brother on the motorbike.

“I’ve used those principles that they’re taking from the wind tunnel tests and applied them to myself in the videos and gone, ‘Okay, that looks good…’, ‘That doesn’t look good…’, ‘I can change here…’

“I’m doing a little bit of that myself and I think that is going a long way.

“I’m seeing the benefits of that when I put my numbers together with the position [changes].

“It’s just small improvements that I can make here and there.”

Talking of numbers… did you have a power meter on last night [at the criterium championships in Ballarat] or not?

What were you sprinting to second place with?

Okay. And, let’s say, when you’re lapping and trying to fight for wheels, what are you holding?

“Oh, it varies. On the course last night you can be pushing anything from 500 or 600 watts to hold the wheel for a 30-second to a minute burst.

“It’s the constant efforts like that which tires guys out.

“Last night I did feel good and those efforts were ones I was able to recover from quite easily and still have enough in the tank to sprint on that tough uphill drag.” 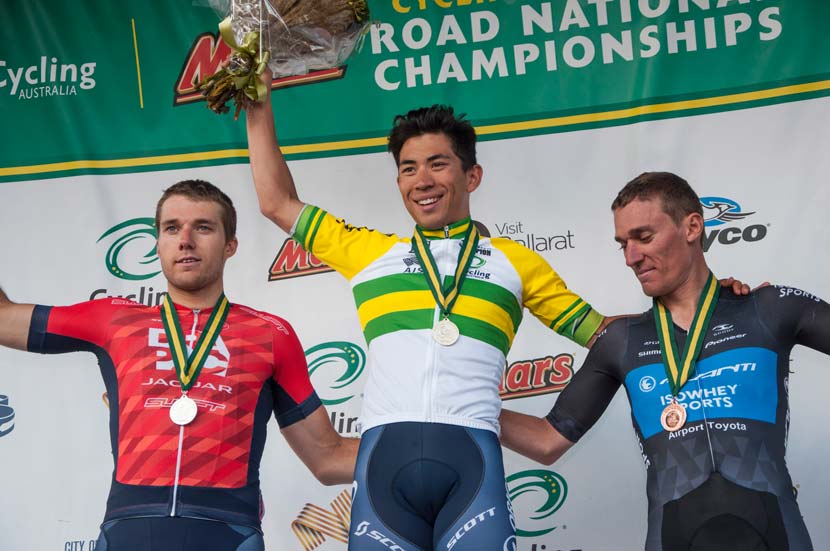