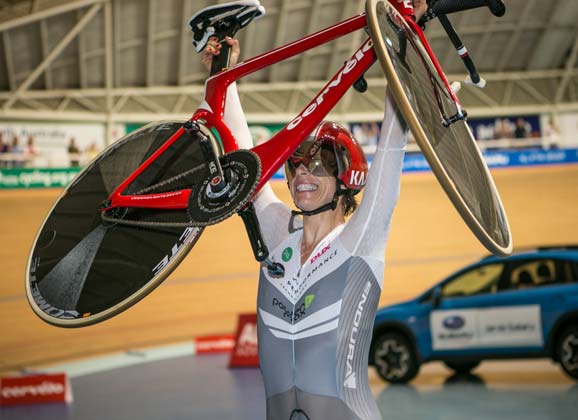 It was announced yesterday that there will be another attempt on the hour record at the end of February. Evelyn Stevens is going to take it on and see if she can beat Bridie O’Donnell’s mark of 46.882km, set in Adelaide on 22 January 2016. 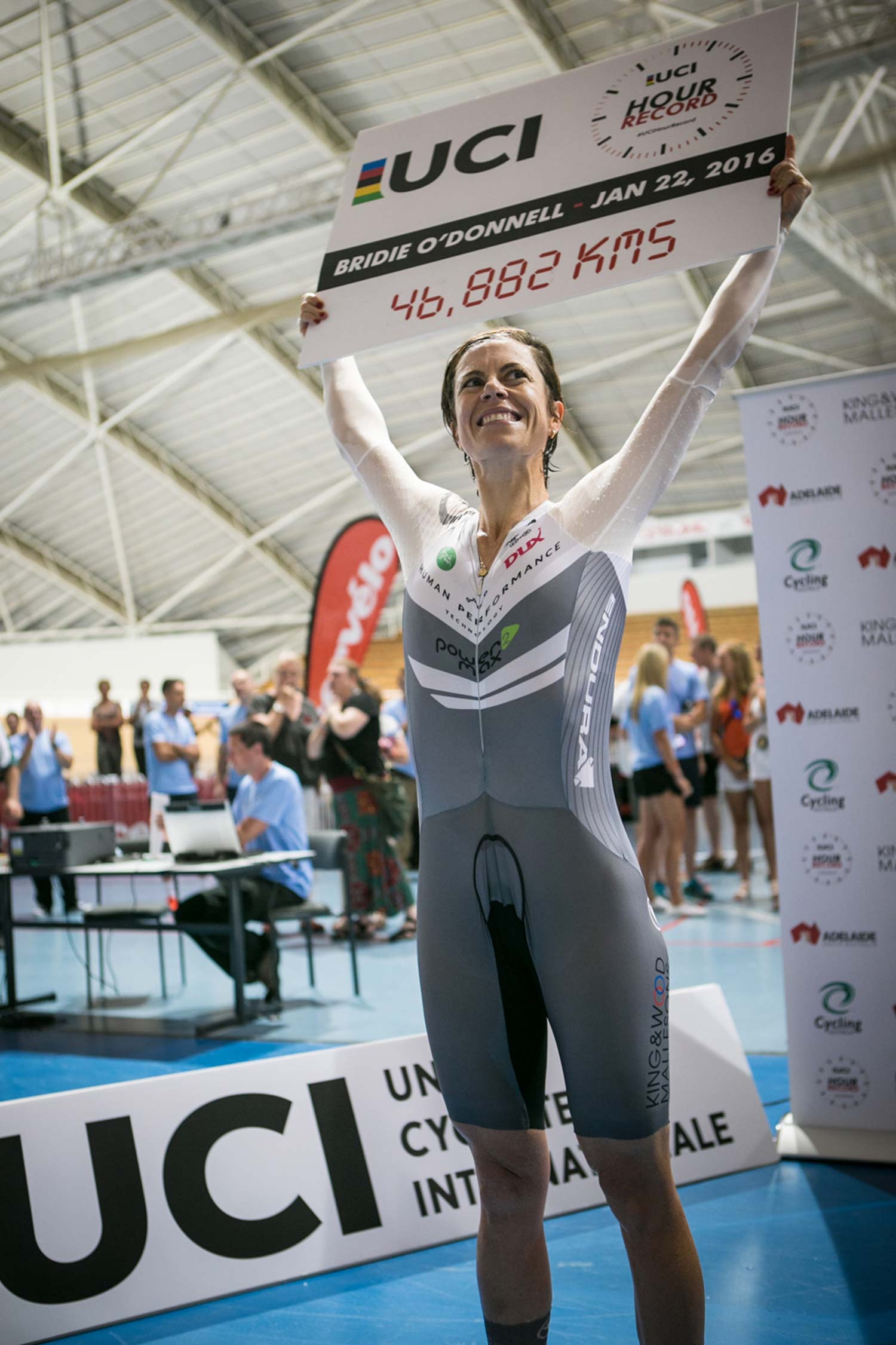 Bridie: “I had the most mindful event of my life”

RIDE: I’m with Bridie [O’Donnell] and it’s a little over a week since the big ride – [the successful hour record]. You don’t look like you’re surprised by it at all…

Bridie O’Donnell: “No. It was a lot about enacting a plan that we had prepared very thoroughly for – logistically, technically and mentally.

“We’ve all seen the ways it can not work, particularly with pacing – or with aerodynamic choices that aren’t ideal… or even just the preparation.

“I think [Alex] Dowsett can break the men’s record again.

“But I think in the women’s case it’s much more of an unknown.

“We haven’t had it broken for 12 years and then both Molly van Houweling and myself are still both amateur athletes so we had a lot of pros – rather than cons – at the time: we’ve been able to pick the equipment we wanted to use and train specifically.

“So while I know the bar I’ve set isn’t very high – and I’m sure it will be broken by better riders in the future – I think that that will set some uncertainty for some of those women like Ellen van Dijk or Evie Stevens because they don’t know me and they haven’t set a whole season aside to train for one event.

“Those women are much better than I am at backing up or performing over long periods of time.” 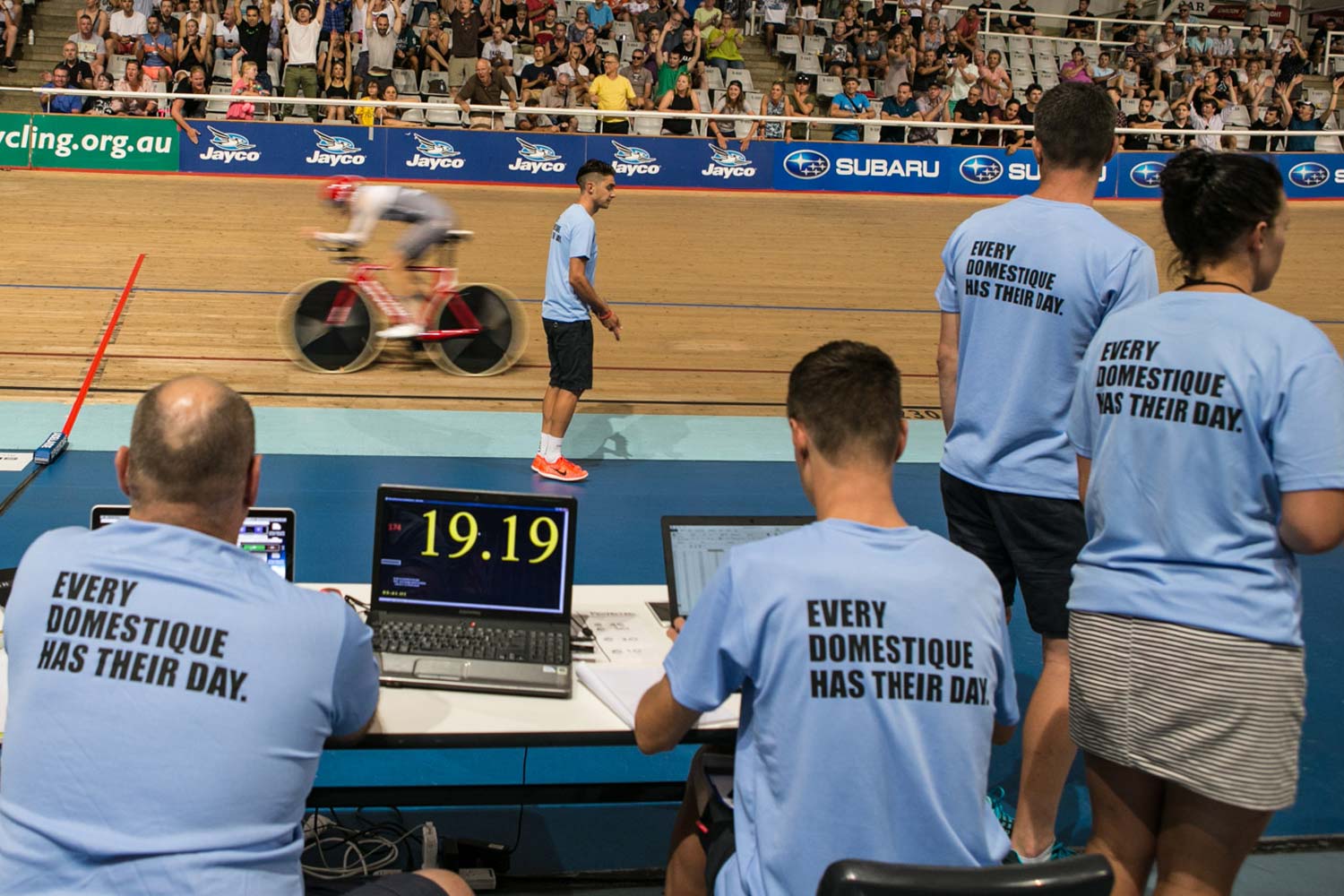 “I guess, by definition, I’m an amateur: I’m not paid to be an athlete – so perhaps that’s what I mean by not being a professional.

“I definitely would consider myself an ‘elite’ athlete – that’s for sure. Perhaps I never thought I was just as talented as a lot of the professional women I raced when I was over there.

“I was so inexperienced when I started racing at an older age that I constantly felt behind the eight ball. But I think I can consider myself, now, in that realm of elite sport.”

I’m a big fan of Leontien [van Moorsel-Zijlaard] and I think that her record over the years is immense. She’s so versatile. Have you ever thought about going onto the drops and doing [the hour] without the aero bars…?

“That woman is a four-time Olympic gold medallist! As you say, track cycling – the pursuit, the hour… the road [race] and the time trial on the road. That woman was without peer at her time in the same way that [Marianne] Vos, probably three years ago, was unbeatable in ’cross and on the road.

“But what we’re seeing now is that more women feel more brave, they try things, they feel they have the capacity to attack and be as aggressive as she is. I think that enhances women’s cycling absolutely.” 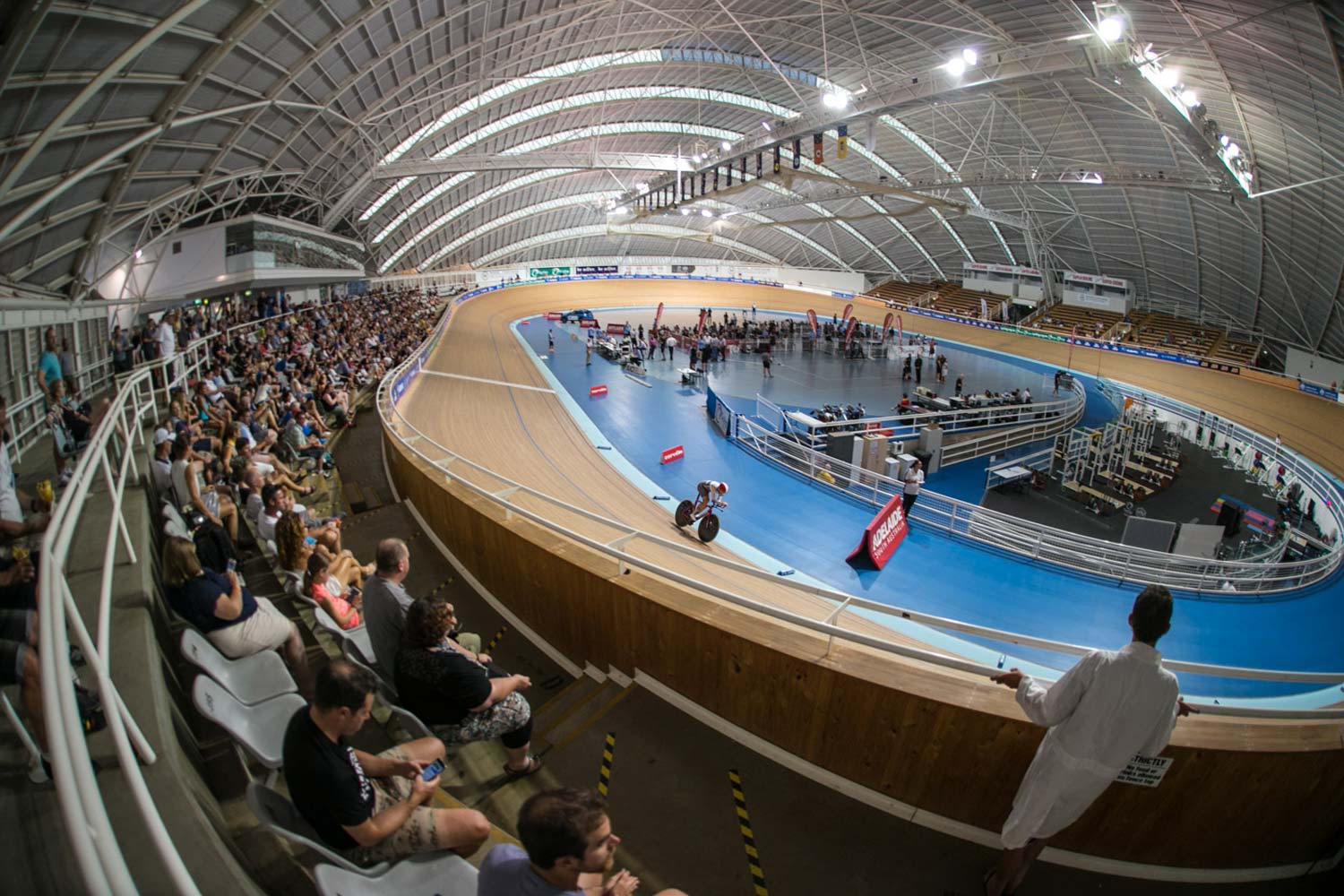 There’s some good personalities but, just going back to Leontien’s effort (46.065km in Mexico, 1 October 2003)… would you have come close if you were without the benefit of aero bars and the Cervélo and all of the products?

“I don’t know. It’s a good question. But the rules changed so I wasn’t going to go and ride on the old rules.

“I think it shows what an amazing effort her ride was – absolutely outstanding. Anna Wilson’s as well, she rode her hour on the old non-aero equipment in 2000 (43.501km in Melbourne, 18 October 2000). That was swiftly broken by Jeannie Longo two weeks later (44.767km in Mexico, 5 November 2000) – poor Anna didn’t hold the record for too long.

“But Anna, again, was a pretty amazing all-rounder. She won races in sprints, time trials and was fourth in the Sydney Olympics in both events. She was probably our last best all-rounder… even before Oenone Wood.

“Some great calibre of athletes… like I said earlier about some of the current pros, there’s no reason why any of the women wanted to do the hour.

“There’s no money in it, there’s no medal in it… if it doesn’t work you’ve spent all this time and energy doing something that didn’t come to fruition.”

But you got a taste of glory. It sounded like the atmosphere was electric [in Adelaide on the night of Bridie’s successful ride].

“It was terrific. All credit to Rik Fulcher and Anna Meares because the commentary they gave was fantastic. And people like my family, who don’t know anything about bike racing – let alone an hour record – felt like they knew what was going on.

“The fans were excited and every 10 minutes when [Rik] said, ‘She’s going well at 31 laps, that’s her target…’ I could hear everything.

“I could also hear them when they were saying, ‘She’ll be getting very tired now. She must be feeling terrible…’ and I was thinking, ‘No, I don’t feel that terrible – I feel great.’

“I think what I’ll enjoy about it if I did it again would be testing myself a little harder, trying to see if I can start at a faster pace and hold onto that schedule, so that I’m pushing the boundary a little bit more.” 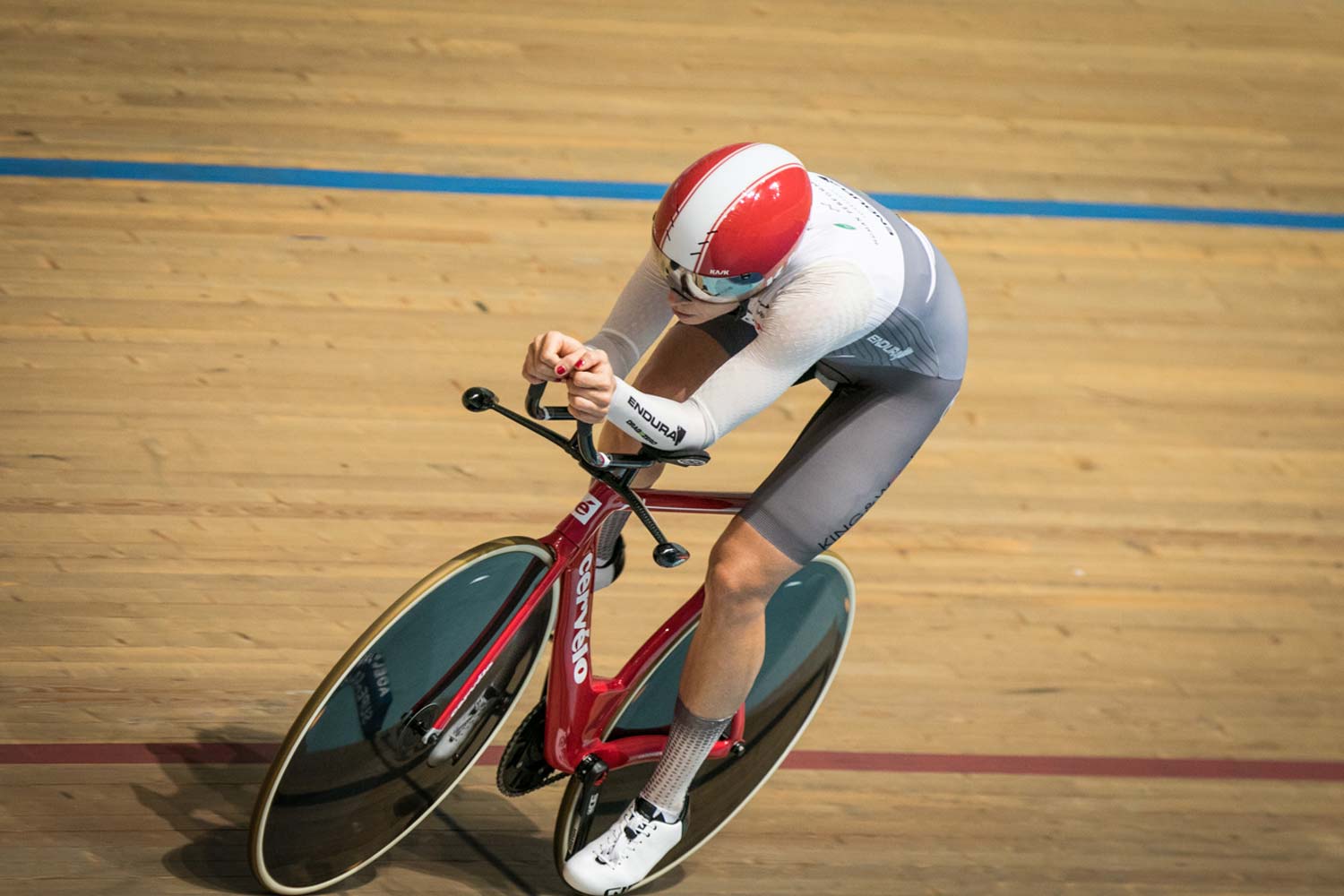 I spoke with Rohan [Dennis] after his [hour record, 8 February 2015] and he said he managed the physical effort quite well. We saw that. He put on a good show and he looked relatively fresh. But he said his undercarriage was brutalised…

So the G-force really does some damage…

“It’s not good. And the training and preparation as well.

“Every session you’re doing on the track is down on the aerobars and trying to keep it as still as possible.

“I was worried about that as well.

“Actually, on the night though, things were a lot more comfortable because I’d just had 24 hours of not being on the track bike and so many things went right for me that night – both mentally and physically.

“I just had the most mindful event – or race – of my life.

“I never felt like, ‘Oh no, what if this doesn’t happen?’

“I just felt: yes, yes, yes…! For the entire hour and that, as an elite athlete, is something we don’t get all the time. I’ve had some other time trials like that in the past but [the hour] was the best performance of my life – that’s why I feel so happy about it.” 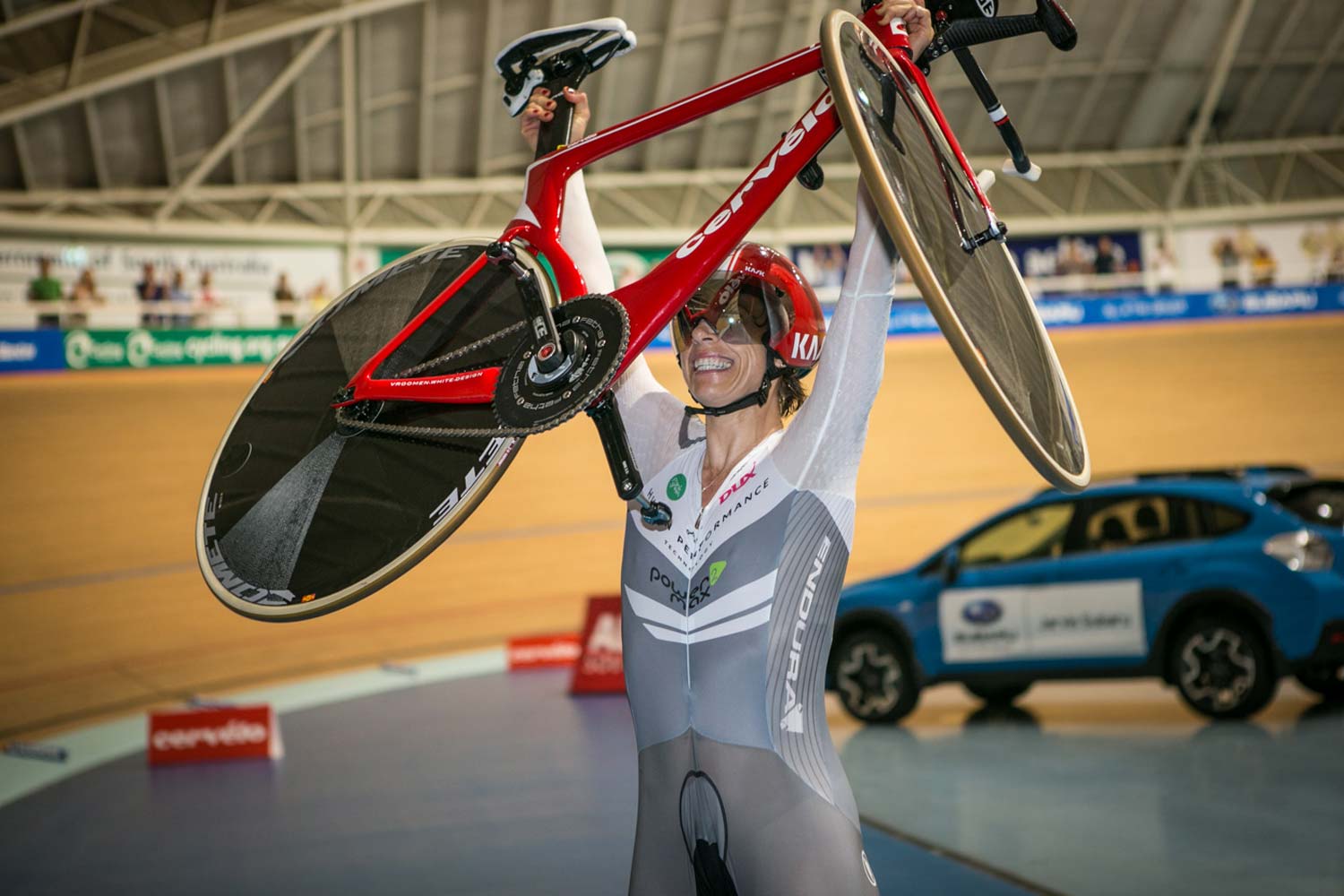 You seem radiant. What’s the next challenge? When we see you racing on the road, there are [displays] of force insofar that you seem to like to sit in the wind even though you probably know that it doesn’t make sense.

“It does make sense actually. I’ve got a team-mate who won the NRS last year and she’s won the NRS two other years [Ruth Corset] – she got second at the nationals [in January 2016] and she got eighth in the Cadel Evans Great Ocean Road Race.

“And sitting in the wind got me the sprint jersey [at the Cadel Evans Great Ocean Road Race].

“So, while years ago my sitting on the front was much more about a fear of getting dropped and wanting to hold my position in the best way, now I’m doing it to protect our very classy GC rider. Her seeing me there means that she feels reassured and we cover everything and she gets to the bottom of a climb or the finish of a race in the best possible position. It’s not senselessness.”

Your cycling is constantly evolving. You clearly love it. Is there any time when you were just so demoralised by the lack of attention that you just thought… ‘Nah…’?

Actually, that’s been pretty well documented – we understand that…

“It’s not just me. So many people have just not been that fit for the mould and that can absolutely be demoralising and make you feel desperate about what’s going to be next and, ‘Will I get another opportunity?’

“I think what is so impressive with some of the women who are not in Orica-AIS – Lauren Kitchen, Tiffany Cromwell… – is that it has been harder for them. You know, going into a team where they don’t speak the same language or you have to find your own living arrangements – that’s hard.

“So while I think that the women in Orica-AIS are great riders, they haven’t experienced the same challenges. They’ve had their own challenges. It’s not to say that everything has been easy for them but I think that people forget that there are all these other riders out there – and the same applies in the men’s peloton – who are in teams where it’s difficult, challenging…

“We know there are all these men out there in Pro Conti teams who are just desperately trying to push up [to the next level].

“Look, the moral of the story is: professional road cycling is a hard gig!

“You may never win a race – for a year, or five years…

“I think that myself, Ruth Corset, and a lot of very good riders have been overlooked or ignored or even had a line put through our name mainly because of our age. And that’s probably what’s so satisfying about finding yourself an event that suits.

“We see so much in Ironman: some of the best women are in their late-30s and early-40s. It’s not a mystery, it’s just physiology.”

So are you going to Kona?

“I am not a good runner; I lost a lot of toe nails – and I don’t need to pay the money to go back again.

“I enjoyed it: I did a great swim/bike… and a disastrous run.”

As a professional professional – as a doctor who rides a bike – why do you find the inspiration to do sport on a competitive level rather than just for fulfilment?

“I think when you have an unshakable desire to be exceptional – and I know some of my medical colleagues have that desire in their work, we know so many surgeons, physicians, specialists who love what they do! They work 24/7, they’re on call all the time. And they do that because their medicine is their vocation.

“For me it was never that.

“I love the job that I do but I don’t want to live that job.

“One of the things I love about cycling is that I’ve gotten better at appreciating my effort, or my performance, and less about focussing on the result.

“As you know, you can be the best, the strongest, the most prepared… and you may not win.

“So if you can focus on what you did well in the race – how you assisted a team-mate or whatever – then I think that’s why being a domestique can be very rewarding. I can be soul-destroying too, in the wrong team, but when you’re in a team that’s getting a result and you’ve contributed it’s extremely rewarding.

“I think I’m a workaholic so if I work hard in a bike race and my team-mate wins, I feel part of it. That makes me feel good.

“And we know that other personality types like, Chloe Hosking, she’s not that type of personality. She’s an opportunist and incredibly fast and she probably is better at dismissing a poor result and going, ‘Oh well, never mind… next time.’

“We need all those various personalities in bike racing, that’s what makes it so dynamic and interesting.”