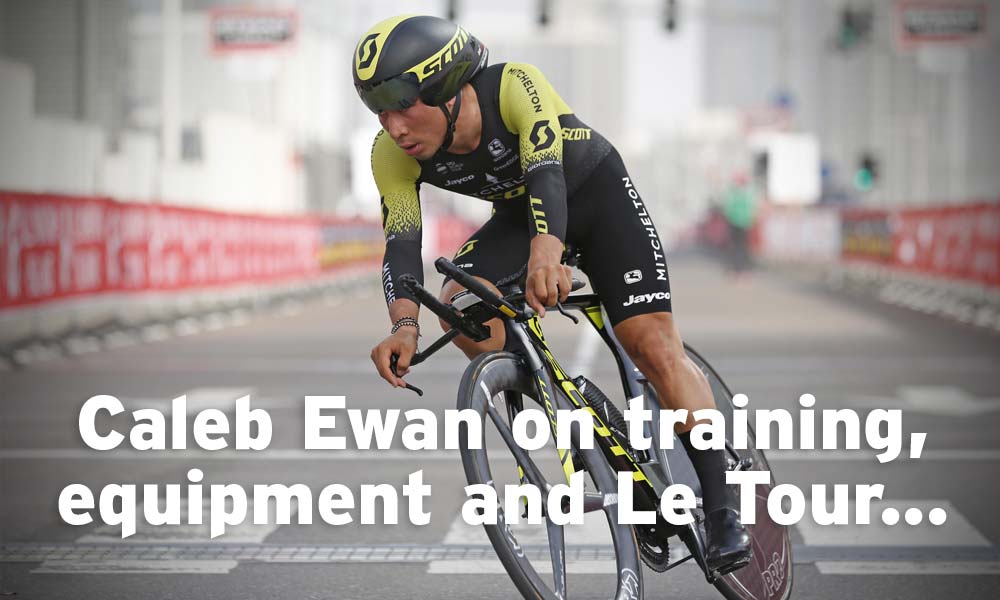 In part two of our interview with Caleb Ewan, he talks about body shape, training on Zwift, a bit about his equipment of choice, and his anticipated debut at the Tour de France.

Caleb Ewan is responding to a query about his body shape. We’re talking a little over a week after his second-place finish in Milan-Sanremo and considering some things that have changed in the time that he’s been racing as a professional. At the start of the 2018 season, I told him, he appeared more muscular than in previous years. “Maybe it was just a long time since you saw me last,” he jokes.

When you’ve watched a rider develop from a promising 16-year-old to a professional athlete who is able to beat the likes of Peter Sagan and Alexander Kristoff in a sprint at the end of a 294km race, it’s logical that his body shape would change.

When we first did an interview, back in December 2011, he was 17 and enjoying the wide variety of racing on offer for a young cyclist. He was versatile enough to get good results in a mix of disciplines on the road and track. He was the junior omnium world champion and holder of three national titles from that year alone: omnium, points race, and Madison. A year earlier, he’d won the junior road race at the Australian championships.

In the years that followed, he honed his craft and he has emerged in 2018 as one of the fastest, most reliable sprinters in the peloton.

“My body has changed a lot in the last three or four years,” he admits, “since I went from under-23s to pro.”

That’s logical. Everyone changes between the ages of 17 and 23.

“I think I’m climbing better which is kind of strange if I’ve put on bulk,” he says, rounding out the discussion about his body. “I’m still young so I guess my body is changing all the time, but I don’t know if I’ve actually put on more muscle.” 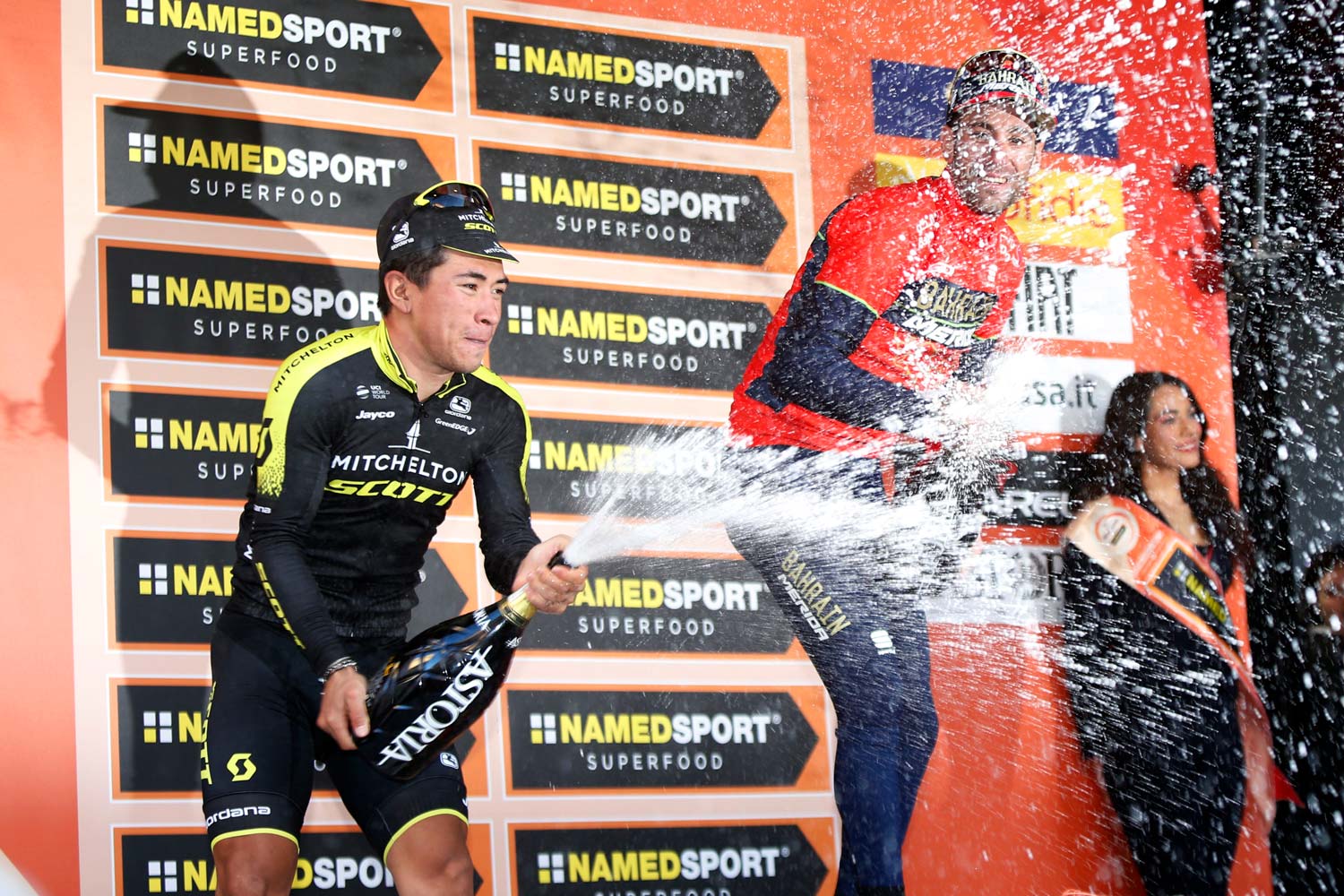 A moment to savour: podium time at Milan-Sanremo.

We now understand that Ewan is a rider who is able to achieve some pretty lofty ambitions. In 2018, the early-season was devoted to Milan-Sanremo and he spoke about his second place behind Vincenzo Nibali early in our discussion.

Now he’ll have a break from racing. From the podium in Sanremo to the start line of the Tour of California there’s a span of almost two months: 17 March to 13 May… he and his team have designed it that way. He hasn’t raced the Tour of California before, in recent years he’s been busy riding the Giro d’Italia at that time of the year but in 2018 he’ll skip the Italian Grand Tour and do the French one instead.

The Tour de France is the next major objective. Ewan is expected to make his debut on 7 July and the aim is to win stages.

He’s done three Grand Tours before: the Vuelta in 2015 (when he beat John Degenkolb and Peter Sagan in an uphill sprint in Alcalá de Guadaíra to win a stage), the Giro in 2016 and again in 2017 (when he finished ahead of Fernando Gaviria and Sam Bennetto win a 224km stage to Alberobello).

Next stop: Noirmoutier, via California…

Caleb’s training hasn’t changed too much over the years and he prefers to do his work on the road. “During winter I was doing a bit more on the home trainer but while the weather is good, I prefer to go out on the road,” he tells me half an hour after I’ve finished a Zwift session and we find ourselves talking about the online riding community.

“Last year I did a block of maybe five days just on Zwift and I felt really good after, so I think there definitely is some benefits.”

He doesn’t talk about the gym. He doesn’t speak about his diet. He’s just getting on with the business of looking after himself and trying to reach his peak for those moments in the season when the team is counting on him for results and exposure.

We talk on FaceTime and he’s happy to comment on a range of topics. We share a few comments about equipment and reference the stark contrast of Nibali’s use of wide handlebars in comparison with what was seen in the break during Gent-Wevelgem the day before.

In the heat of the sprint, Ewan has one of the most extreme positions of any rider in cycling. We’ve covered that topic in our feature on wind tunnel testing and an interview from last January. When it comes to equipment choices, however, he says he’s “pretty standard”. There’s no customisation. “It’s more the body position than the bike position,” he says.

“I’ve got 40cm handlebars. I’m not super-narrow, I’m not super-wide. I’m just kind of in the middle and, at the moment, that’s what I feel comfortable in.

“I remember on the track I used to go more narrow but I think on the road, because you’re sitting there for so long – like Milan-Sanremo, for example, you’re on the bike for seven-plus hours – and you still want to be comfortable. You don’t want to be too narrow.

“I run at 140mm stem and 40cm bars but I don’t think that really changes my position at all.” 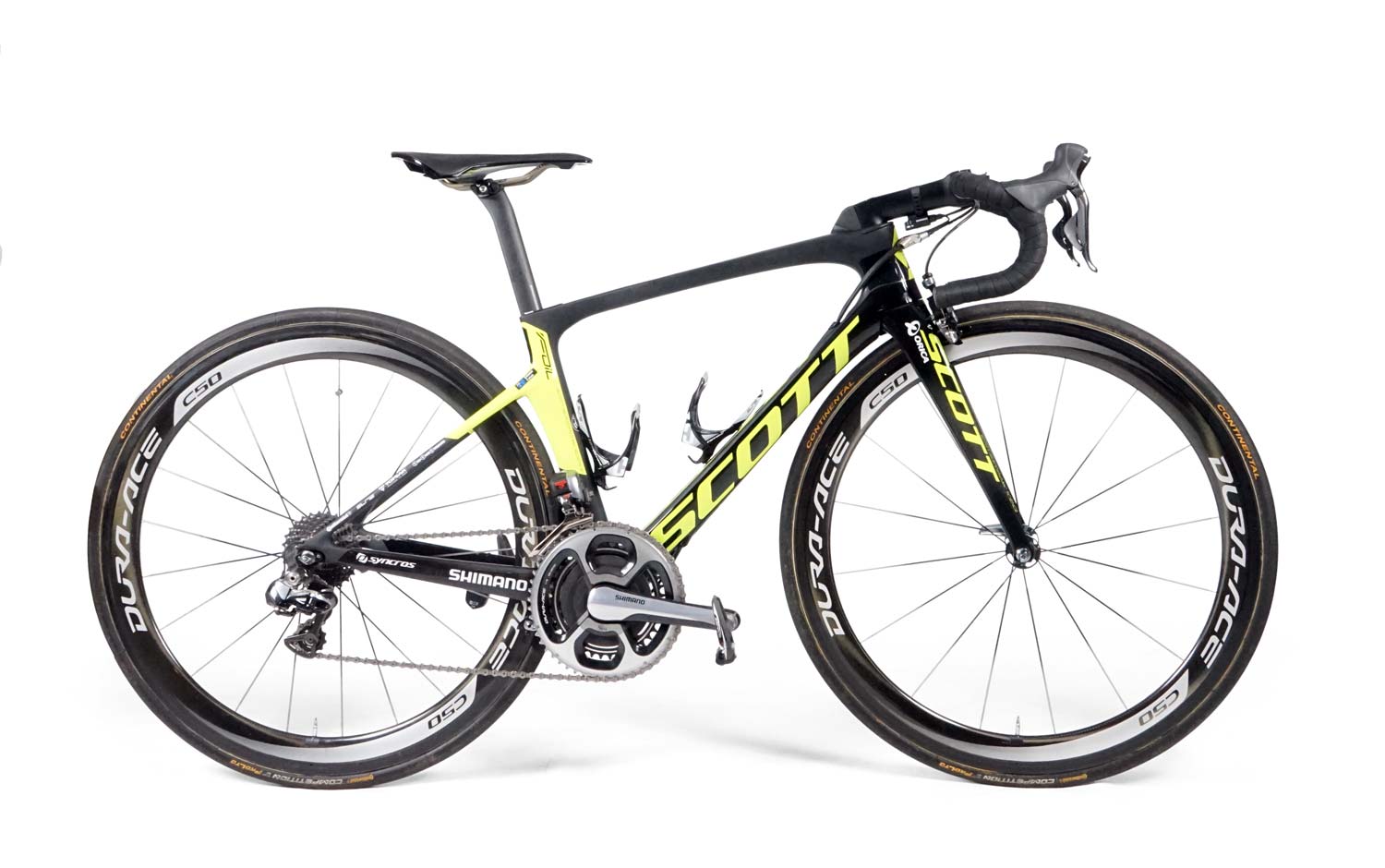 Le Tour rather than Commonwealth Games

“To be honest, I’m in a time in my career where I’ve got a lot of exciting and new challenges coming up on the road,” he says when I ask if he ever gets nostalgic for track racing, one of the main focusses of the so-called Australian Cycling Team (formerly known as Cycling Australia’s HPU). He’s earned a few world championship medals over the years – including second in the junior and under-23 road races in 2012 and 2014, respectively. But his only rainbow jersey (to date) was won on the velodrome – the junior omnium of 2011.

“Maybe later on in my career, once I’ve maybe achieved more on the road – and have done all the big races – then I might have a bit of an urge to come back for some track racing.

“Every now and then when I’m watching it, I do miss it a little bit but it’s one of those things where it’s so competitive that you can’t really just… like, I couldn’t just come back onto the track and be good. I’d have to really put a lot of eggs into that basket and I don’t know if my team would like that or not.

“Like I said before, there’s so much more exciting stuff coming up on the road for me that I don’t really have that urge.”

Track cycling is expected to burst into the spotlight in the coming weeks when the Commonwealth Games are contested in Queensland. Ewan contested the Games in Glasgow, Scotland back in 2014. He finished 12th. That doesn’t sound too bad… but he was over 11 minutes behind the winner, Geraint Thomas, and was actually ranked last in what was a race with a large attrition rate. Yep, only 12 of the 139 starters finished.

That race that came and went and probably not too many people remember much about it. Ewan certainly isn’t talking about the Commonwealth Games, not even if it comes at a time in his season when he has a little more time on his hands than other professionals.

The focus is now the Tour de France. He knows it won’t be easy but his attitude and ability suggest that he’ll be able to have a role of influence this July.

“I’m not going to go in there trying to chase the green jersey,” he tells me. “But if that’s starting to fall into place, obviously I’ll go for it but my main focus at the moment is stage wins.

“I understand that it’s going to be a pretty big challenge – it’s probably going to be the biggest challenge of my cycling career yet, so I don’t want to go in there with too many ambitions.

“I think going for a stage win is a massive ambition anyway for your first Tour.” 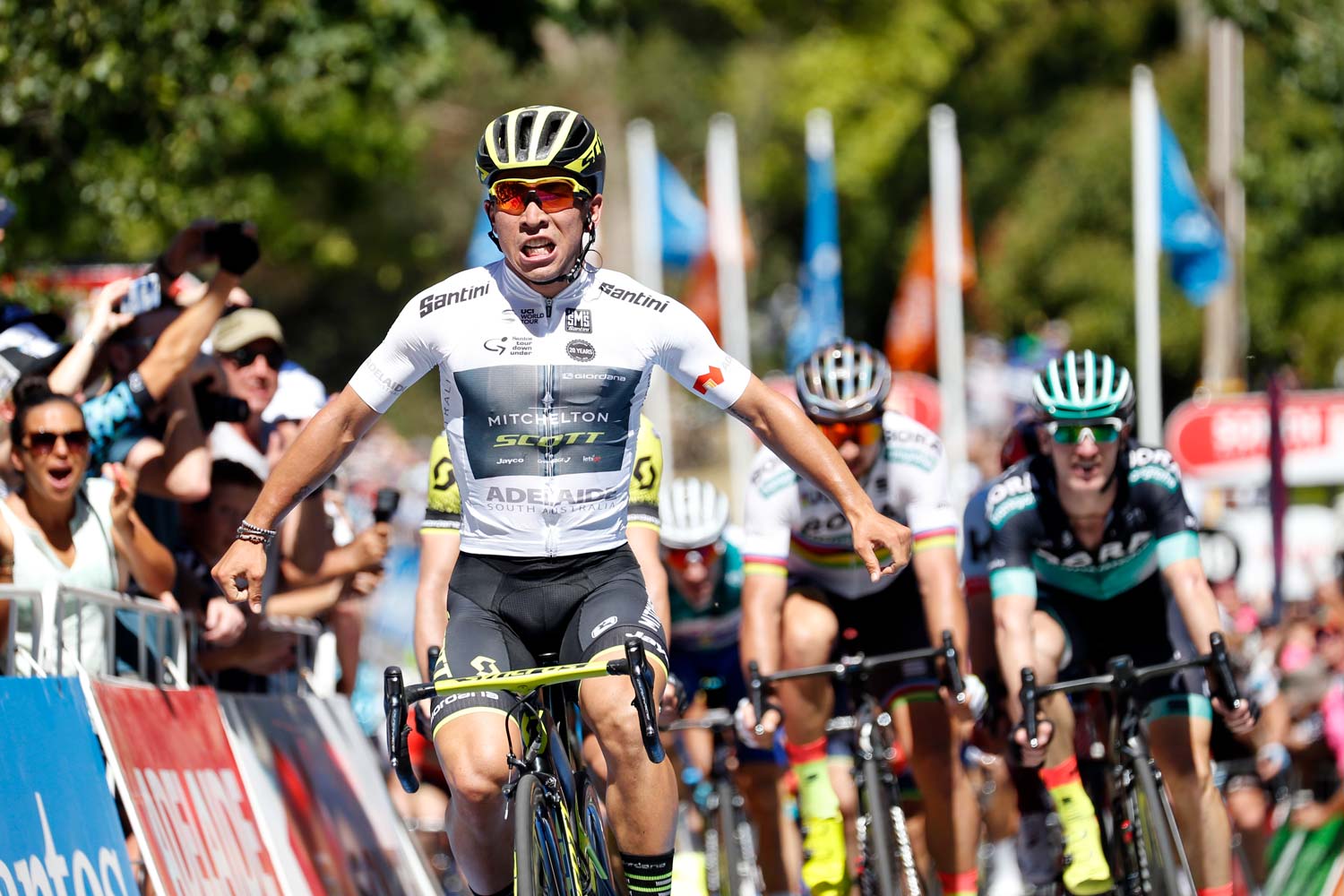 Caleb wore the white jersey as best young rider when he won his stage at the 20th Tour Down Under in January. Will he also wear white when he makes his debut at the Tour de France in July?

The Australian Sports Commission would like us to believe that gold medals at Commonwealth Games and/or Olympic Games is offers inspiration for people to take up sport. For cycling, however, the real glut of interest comes from the Tour rather than track racing, even when there’s likely to be plenty of success by the Australian Cycling Team next month.

From an athlete’s perspective, does Caleb think that an appearance at the Tour is going to help the popularity of cycling in his home country?

“I don’t think me just going there will help,” he says, concluding our chat, “but I think that if I can go there and do well, it could potentially help cycling in Australia.

“If I could help cycling in Australia, then that would be great. And I hope to do that.

“I hope to inspire some juniors or someone coming up through the ranks, or people that are thinking about getting into the sport. If I can encourage them by doing that – by getting good results at the Tour – then that would be a great thing.”