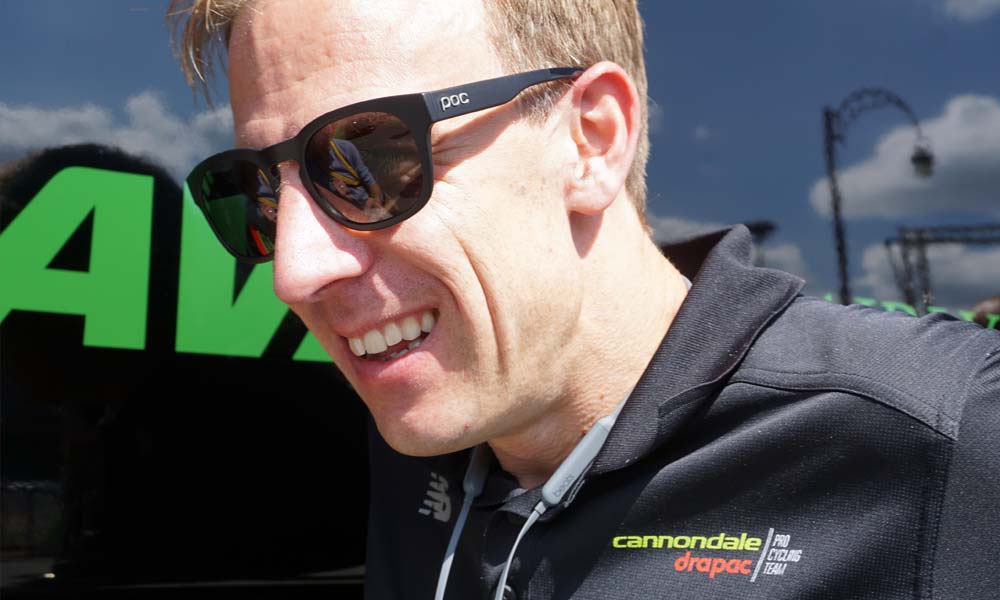 Charly Wegelius: the benefits of ‘wellness’

Talk to Charly Wegelius and chances are you’ll leave the discussion feeling a little more calm than you were before starting it. We caught up with the directeur sportif from Cannondale-Drapac before the start of stage three of the 2017 Tour.

At the end of stage two, the first of the polka-dot jerseys for the 2017 Tour was presented. A former pursuit and TT world champion, Taylor Phinney, was on the attack on Sunday. He collected a couple of points on a couple of hills and was rewarded with podium time on his second day in the race.

The 27-year-old is a unique individual, a special kind of personality in the peloton. Tall, charming and brimming with confidence, he famously made a comeback from a dreadful accident a few years ago that obliterated his leg.

Phinney has been a different rider ever since That Crash in the US nationals in 2014, exactly a month before he turned 24. Until then, he was on course to being the next big cycling superstar from the US. He’s still racing, still performing, still entertaining – on and off the bike. He retains his star appeal, and the new Taylor is so relaxed that he doesn’t really feel the need to talk in clichés.

His interviews after the stage to Liège quickly became the stuff of legend. Within minutes of his appearance in the media mix zone his commentary was being uploaded as sound grabs and clips… and it went viral.

“Honestly, I finished the time trial yesterday, we went back to the hotel, I took a shower. I was completely naked standing in my room and Charly Wegelius, the director, comes in and just sits down next to me – and I’m kind of like, ‘Hey man…’

“And he’s like, ‘How do you feel about going for the polka-dot jersey?’

“And I was like, ‘Bro, I’m completely naked. Like, I haven’t even thought about what clothes I’m going to wear….’”

And there was much laughter.

Taylor Phinney is a unique character. His charm comes from confidence and, frankly, a different take on life. And his team nurtures and encourages a different kind of thinking.

Cycling has many traditions and while the sport is slowly being modernised, many old-school teachings remain. Cannondale-Drapac has taken a different approach in 2017 and introduced an entirely new concept into the team: it is the only squad at the Tour which has assigned a full-time ‘Wellness Consultant”.

Gearoid Towey is that man. The Irishman is at the Tour de France for the first time and although he insists he’s never offered the advice of team meetings in the nude, he is introducing concepts to Cannondale-Drapac that the team believes has the potential to improve performance.

Towey’s recruitment is an initiative that Michael Drapac insisted on before he signed the contract to be co-naming rights sponsor.

The day after The Naked Discussion, I caught up with Charley Wegelius to talk about Phinney and his demeanour, preparing riders for a challenge, what it’s like to have a ‘Wellness Consultant’ and a couple of other things.

RIDE: I’m with Charly Wegelius and I’ve got all of my clothes on. You sort of made the headlines…

Charly Wegelius: “Yeah, but that was ‘fake news’.”

Ah-haah! But is that the tact you’ll take now – just nude meetings all of the time?

“I think, psychologically it puts me in a pretty strong position with a rider: when he’s naked and I’m not. It gives me a great starting point.”

Beyond that, do you want to talk about his performance…? Did you think for a while me might have held on (to the lead of stage two)? That’s the traditional question for the breakaway.

“Yeah. I mean, I’m cynical enough to be sort of pessimistic about those kind of situations usually, but around five kilometres to go every time gap we were getting was 55 seconds, in that period where it’s supposed to be incrementally dropping.

“So there was a little flutter in my stomach and I thought, ‘Aaaah…’

“And you know, Taylor – despite his injuries and all the stuff – he’s got a massive engine. And he’s a person who can really rise to an occasion. So, I believed.”

And he’s… ah, how do we put it? One of the more relaxed characters in the bunch. He was always charismatic. Do you play off each other because you’re über-calm as well. What’s the go with this fantastic approach? At least, from the outside looking in, it looks very mellow and enjoyable.

“I think to answer that question properly, you’ll have to ask him to complete it. But from my side I think it’s easy in cycling – because it’s such a closed little world – to think that if someone has different ideas about things, or other interests, that they’re not engaged in their work. And it’s just not the case with him at all.

“Taylor never asks what time we’re leaving or what time is breakfast; he’s fully engaged in his work. And he likes painting and meditating – and that’s absolutely no problem for us.

“So, from the first interactions we had – he and I, about racing programs and stuff – he showed a lot of faith in my decisions which was really nice for me.

And I think I showed a lot of faith in him.

Hopefully that’s building some confidence but I just try and let him be who he needs to be like we do with all of our riders.”

You’re the only team that I know of in the WorldTour with a ‘Wellness Program’. Gearoid Towey is along for the ride this year. Can you just give me a little overview of his influence? It seems that the riders are taking something from his input.

“Oh, for sure! And the staff also.

“I think it’s really healthy to have the space in such a sort of intense working environment, to have someone trusted that you can talk to about those kinds of issues… yourself and your working life and so on, with zero risk. You know?

“It’s not an act of disloyalty and it doesn’t mean you’re not engaged in the team or anything. But you can talk to him and he’s a really easy person to talk to. Even myself, I’ve had some really nice conversations with him that I think are helping me to grow professionally and do this job better.

“So I think it’s actually a performance aid.