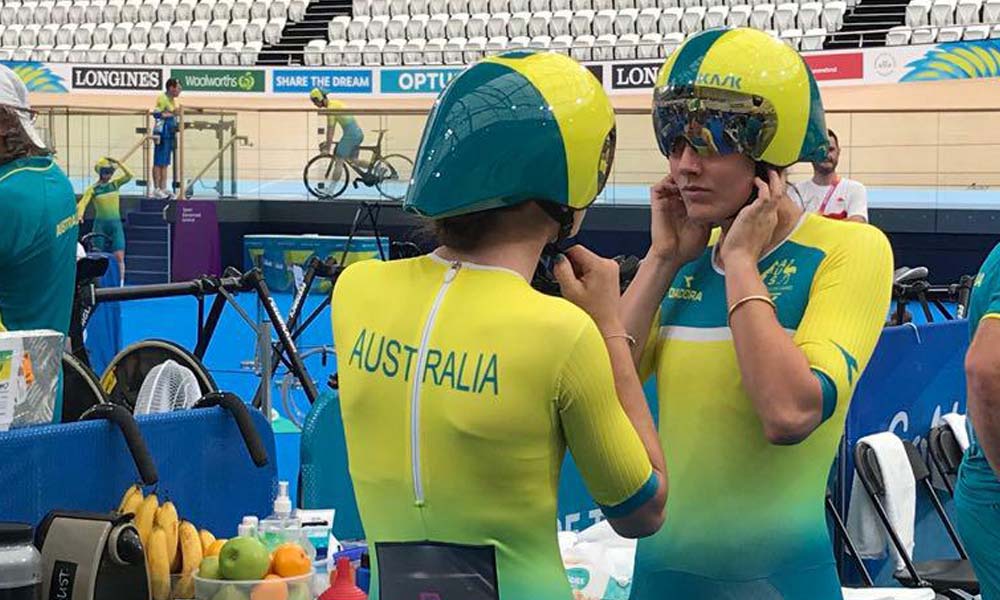 She’s been a world champion (twice). She races on the track and the road. She’s contesting three events at the Commonwealth Games… so we spoke with Ash Ankudinoff about what she expects from the racing this week.

“It all kicks off on Wednesday with the opening ceremony,” said 27-year-old Ash Ankudinoff about the Commonwealth Games. “Unfortunately we won’t be able to walk in that Comm Games arena for the opening ceremony because we will be racing the next day in Brisbane, not the Gold Coast.”

– Click the SoundCloud file (below) to listen to the interview –

The track events take place on the Anna Meares Velodrome in the Queensland capital, a short trip from the Gold Coast and for the first time the Commonwealth Games will boast a team pursuit for women. This is the event in which Ankudinoff has won her world titles – in Copenhagen in 2010 and Paris in 2015 – and there’s a formidable group of riders putting their hand up for selection in the Australian quartet.

The exact line-up hasn’t been announced but we already know that Ankudinoff – along with two-time individual pursuit world champion Rebecca Wiasak, and Netti Edmondson – will race the IP which is on later in the week. 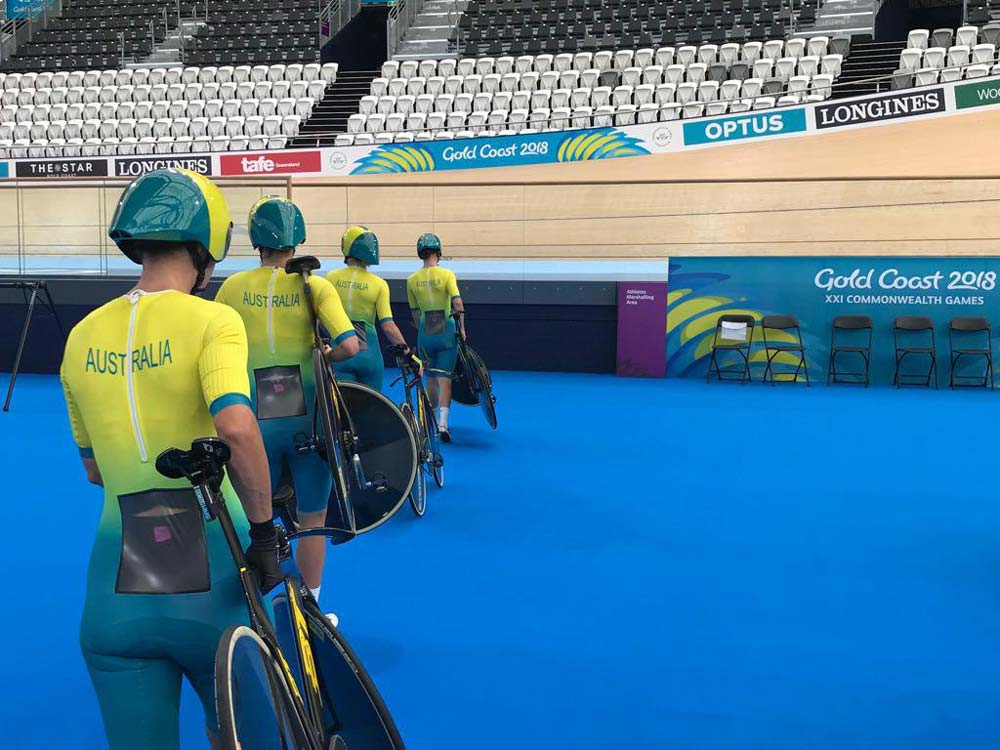 The team pursuit is on the first day of competition at the 2018 Commonwealth Games.

The team pursuit begins on Thursday and fast times are expected. Despite the warm conditions, however, Ankudinoff admits that it’ll be quite extraordinary if a world record is set that event in Brisbane this week. The team is good but the fastest ever ridden was in the final of the Olympics, which is another level all together.

“In training we’ve been going great,” Ankudinoff said earlier today. “Yesterday the temperature was 31.5 degrees inside, so you just sit and you sweat.

The trio from Australia who will contest the individual pursuit have a history of fast times at international level. Ankudinoff, Wiasak and Edmondson have achieved big results in the past but they recognise that matching the speed and endurance of two-time world champion Chloé Dygert is quite a task. The young American recently broke the world record (twice) in her successful title defence at the worlds in Holland – and 3:20 is remarkably fast!

Ankudinoff has plenty of endurance thanks to work on the track and road but her PB for the 3,000 is 3:28. We wait to see what comes from her second event in Brisbane but first comes a focus on the opening race, the team event… and the chance to set a precedent.

“It is the first time that the women have a team pursuit, so it would be a great way to get things started – being the first team to win the Commonwealth Games,” said Ankudinoff, who will also contest the scratch race later in the program.

“I love the team pursuit, racing with your team-mates alongside you. But then I do also love the individual side of the IP where you just go out there and race against the clock and the other person on the other side of the track.”

Dygert is destined to be The Next Superstar in US cycling, so what does Ankudinoff think of her 3:20 rides (posted in qualifying and again, a fraction of a second faster, in the final)?

“I did see a very impressive ride from Chloé,” said Ankudinoff about the worlds, “3:20 is definitely something! I just hope to do under a 3:30, to be honest…”

The Americans have the benefit of guidance given by Ankudinoff’s former coach, Gary Sutton who was dropped from the Australian program at the end of 2017 and promptly took on a similar role with USA Cycling.

“She is just one of a kind,” said Ankudinoff about Dygert. “To break Sarah Hammer’s long-standing record – which was done at altitude, and thought to be never to be broken – but Chloé has just surpassed that. It’s just another level and it’s very impressive.”

Does Ankudinoff miss Gary? “Yeah, of course,” she quickly replied. Both the rider and her former coach are from ‘The Shire’ in Sydney’s south and ‘Sutto’ was pivotal in making Ankudinoff the rider she’s become in 2018 but he won’t be in Brisbane this week.

“He was a big part of my career. He definitely got me into the sport of track cycling. I will never forget where I’ve come from and he played a lot of a part in the athlete I am today.”

It’s a story that’s been told before and we recognise that the world keeps on spinning even if there are many in the Aussie program who miss the input of the highly respected coach. He was at the worlds, Ankudinoff was not. Like many of her team-mates this week, she was focussing on being ready for the racing in Brisbane.

For someone who has won world titles, what does the Commonwealth Games represent?

“It’s called ‘The Friendly Games’,” said Ankudinoff, “but I think there’s still real hunger for us to come away with some gold medals. We didn’t go to the world champs this year [so] we could really focus on having some results up here [in Queensland].

“We would like, as a women’s track endurance team, to post some good times just showing the world, ‘Hey we did miss out on the world championships but we’re still here.’ This will just be a stepping stone in the hope to do well in Tokyo come 2020.”